No, Khrushchev never banged his shoe at the UN 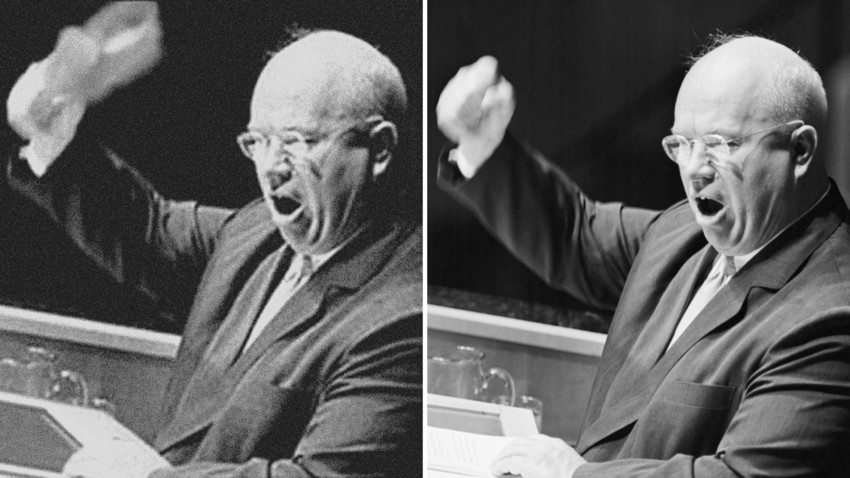 Fai/Legion Media; Getty Images
Nikita Khrushchev, one of the most colorful Soviet leaders, was famous for weird phrases and impulsive gestures. However, he didn’t go as far as slamming his shoe at the UN General Assembly in 1960. We show why this story is a fabrication.

The story goes like this: On October 12, 1960, there was a meeting of the General Assembly of the United Nations. During a speech by Philippine delegate Lorenzo Sumulong, Khrushchev started slamming his shoe on the rostrum to express his anger with Sumulong.

There’s even a photo of Khrushchev with his shoe, raving madly. Looks photoshopped – because it is. What happened? 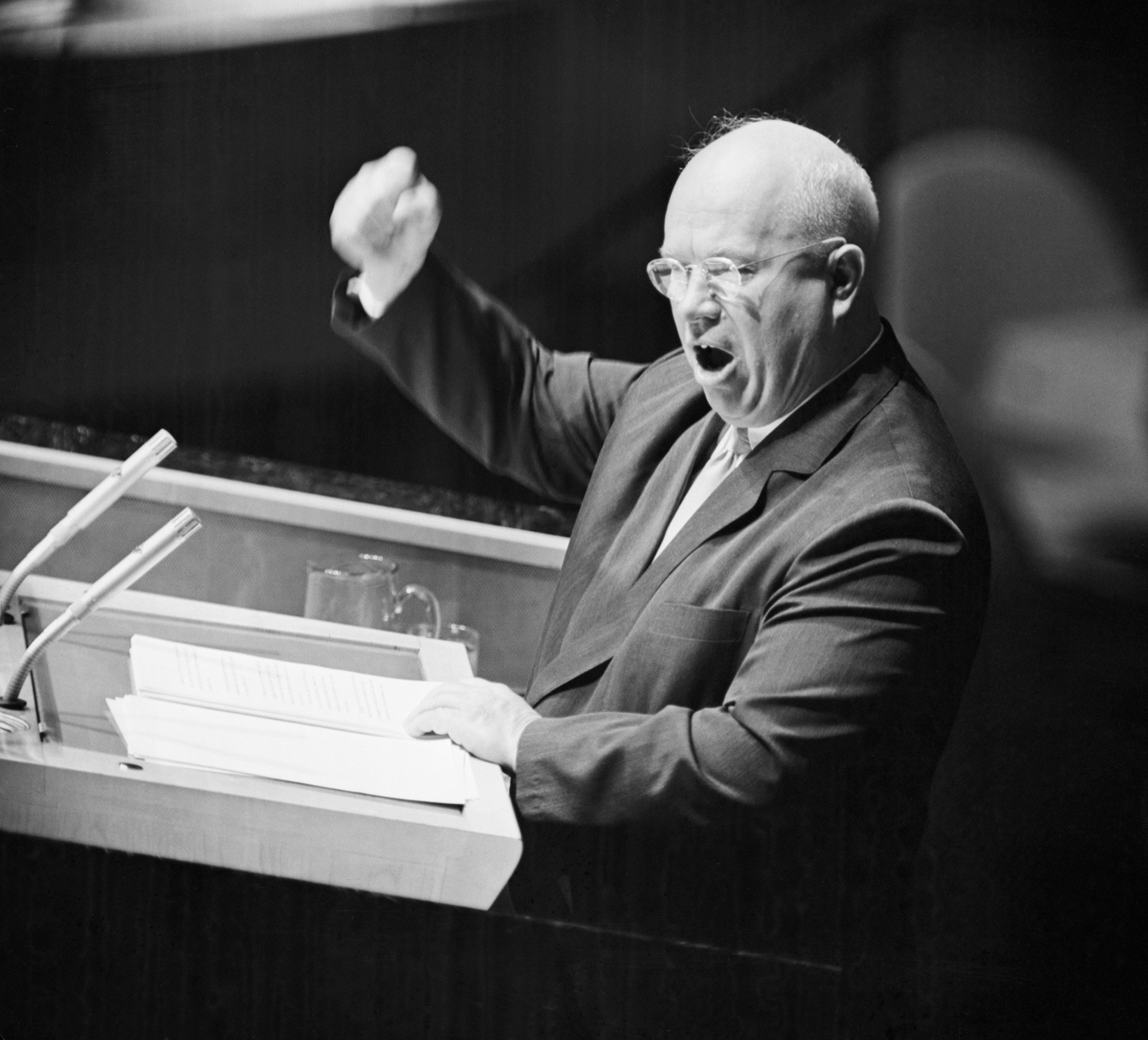 Nikita Khrushchev speaking at the UN Assembly on September 23, 1960

, the General Secretary’s speech at the event was fiery and angry. In 1960, 17 African colonies had declared independence, and the topic was widely discussed at the session. Another hot topic was the Hungarian Revolution of 1956 and the Soviet invasion.

The atmosphere was agitated. Also, Romanian Foreign Vice-minister Eduard Mezincescu behaved in such a way that his microphone had to be turned off, and Assembly President Frederick Boland banged his gavel so hard that it broke.

Representatives of Western countries blamed the USSR and its policy towards Hungary. Then the talk switched to African colonies, and Khrushchev gave an emotional speech, scolding imperialist states - “the colonizers.” After that, the head of the Philippine delegation Lorenzo Sumulong took the floor and implied that the USSR was also a colonizing state: "The peoples of Eastern Europe and elsewhere which have been deprived of the free exercise of their civil and political rights and which have been swallowed up, so to speak, by the Soviet Union."

A stir at the UN 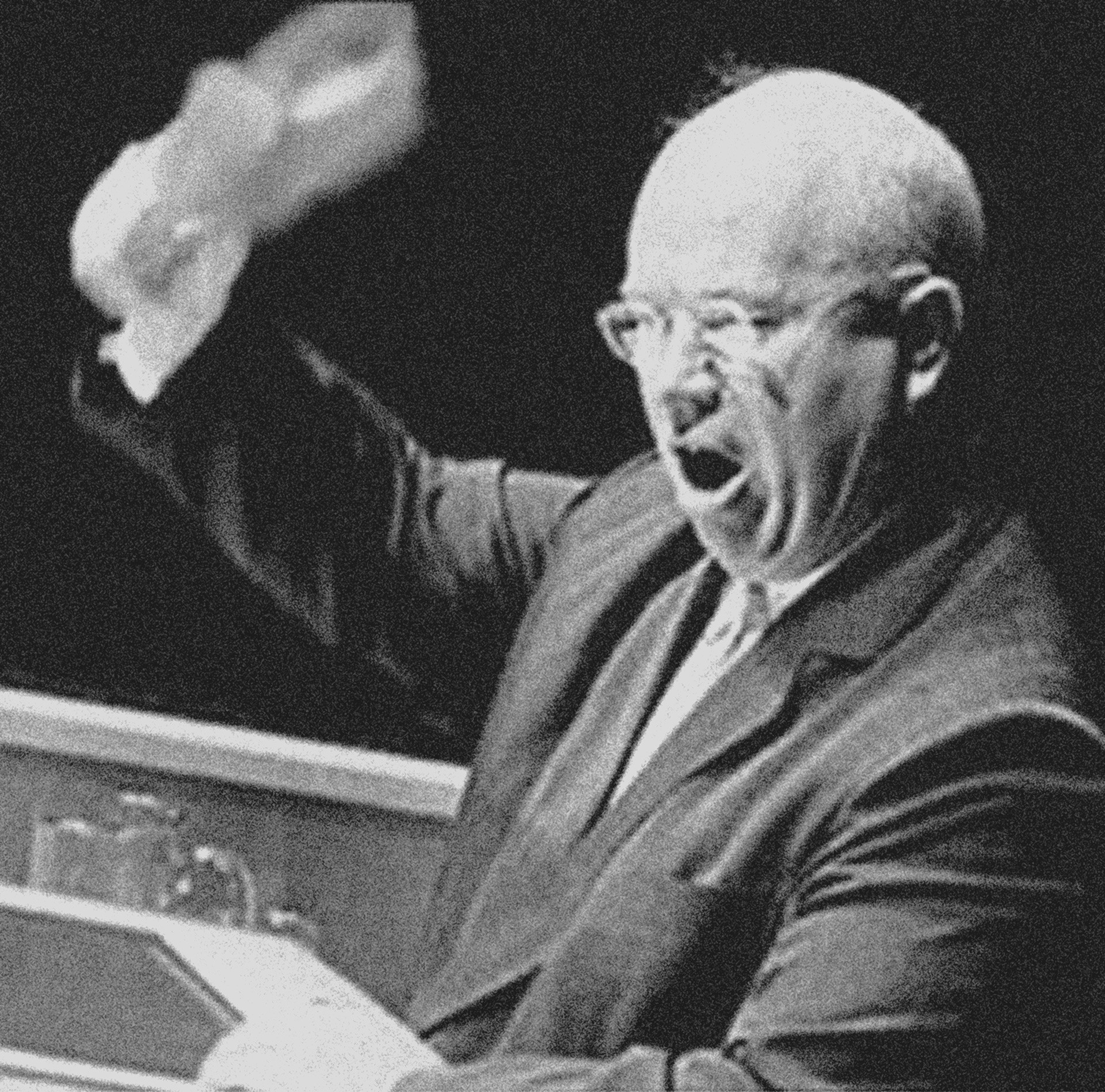 Photo montage of the shoe.

This outraged Khrushchev quickly approached the rostrum and shoved Sumulong to the side with a gesture of his hand. He then went to the microphone and gave his answer, calling Sumulong "a jerk, a stooge, a lackey," and a "toady of American imperialism." All this was out of order, but nothing could be done. When finished, Khrushchev returned to his seat.

As Sumulong continued his denunciation of the communist regime, the Soviet leader became more infuriated. He raised his hand to speak but was ignored. And then…

As Khrushchev’s personal interpreter Viktor Sukhodrev recalls in his memoirs, the General Secretary started banging his fist on the table to attract Boland’s attention. In his hand, Khrushchev held his watch, fiddling with it during the assembly.

Sukhodrev relates Khrushchev’s words: “I began to bang with my fist, and I saw that my watch stopped. Damn, he said, broke my watch because of this ! And then I took the shoe and started banging with it!” So, the fact is that the banging occurred not at the rostrum, but at the delegation seats. And the real photo proves it. 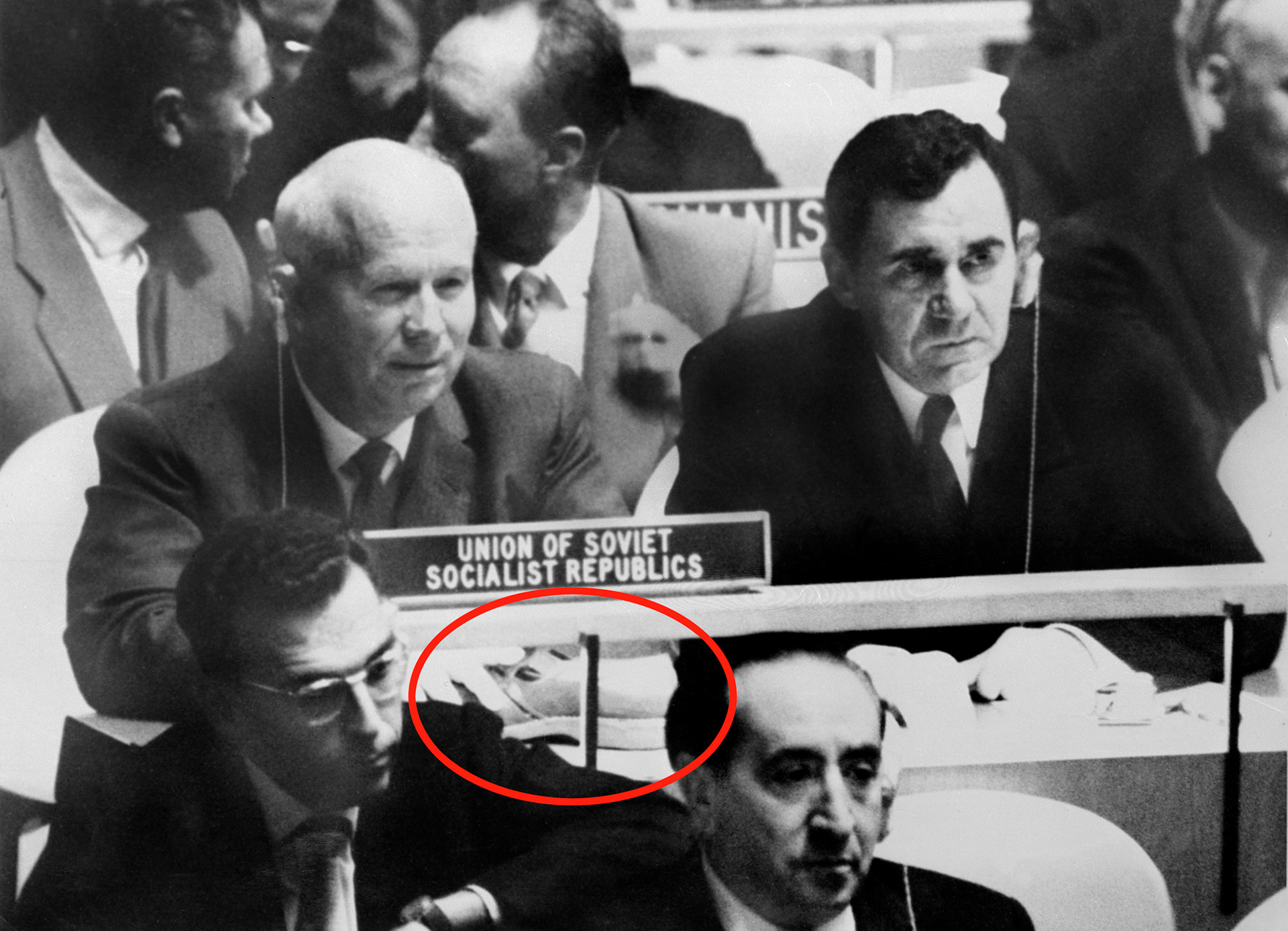 The actual photo of Nikita Khrushchev and Soviet Minister of Foreign Affairs Andrey Gromyko (R) at the meeting of the General Assembly of the United Nations on October 12, 1960. Red circle marks the shoe on Khrushchev's table.

, how did the shoe appear? The attendant at the Assembly recalled that someone accidentally stepped on the back of Khrushchev’s shoe when he was sitting at the start of the session. The desk was tight, and the corpulent leader couldn’t bend down to put the shoe back on, so he just put it on his desk. The same version is supported by Nikita’s son, Sergey, 25 at the time, who also was at the session.

James Feron, a Times journalist who was also present, recalls, "I saw Khrushchev not bang his shoe,” adding that the Soviet leader "leaned over, took off a slip-on shoe, waved it pseudo menacingly, and put it on his desk, but he never banged his shoe."

John Loengard, former photo editor for Life is "certain" that Khrushchev "did not bang his shoe on the desk," but that "he certainly meant to do so." According to Loengard, Khrushchev "reached down and took off a brown loafer from his right foot and put it on the desk. He grinned to delegates from the United Arab Republic who sat across the aisle and mimed (with an empty hand) that the next time he'd use the shoe to bang. I can assure you that every camera in the booth was trained on Khrushchev, waiting for him to use the shoe. He only put it on again and left. None of us missed the photo, which would have been a serious professional error. The event never occurred."

According to German journalist Walter Heinkels, a shoemaker in Pirmasens said he had seen a photo of the shoe in a newspaper and recognized it as his own. West Germany had sent 30,000 pairs of shoes to the Soviet Union, of which 2,000 pairs were good low shoes, and one might have found its way to Khrushchev.