How Russian chess players used psychic powers against each other 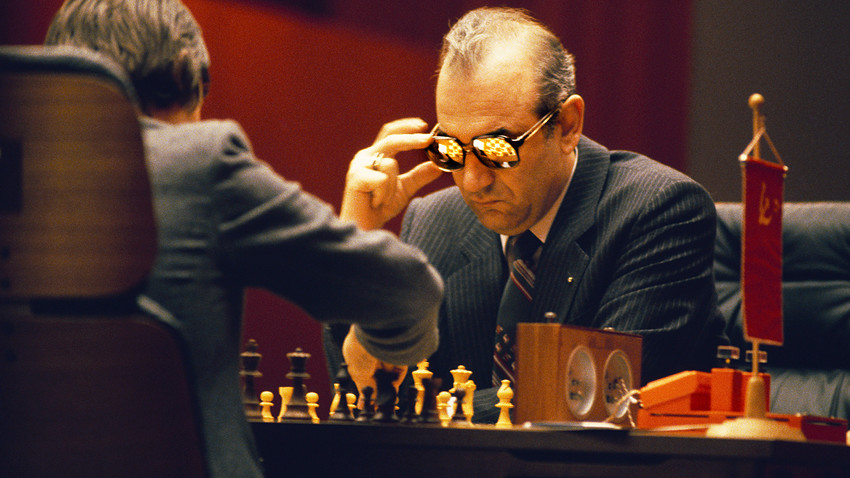 Getty Images
Two of Russia’s finest chess grandmasters, Anatoliy Karpov, and Viktor Korchnoi, both enlisted the help of parapsychologists during their battle to be world champion in 1978. The match was arguably the most scandalous in the history of chess.

It was the fourth game in the 1978 World Chess Championship and world champion Anatoliy Karpov (USSR) was defending his title against Viktor Korchnoi, a fellow Russian grandmaster. Korchnoi fled his homeland two years earlier and was waiting for Switzerland to grant him political asylum. The chess match was billed as a devoted Communist against a fierce anti-Soviet traitor. Politics gave the match a scandalous flavor, but the mind games involved really spiced things up. 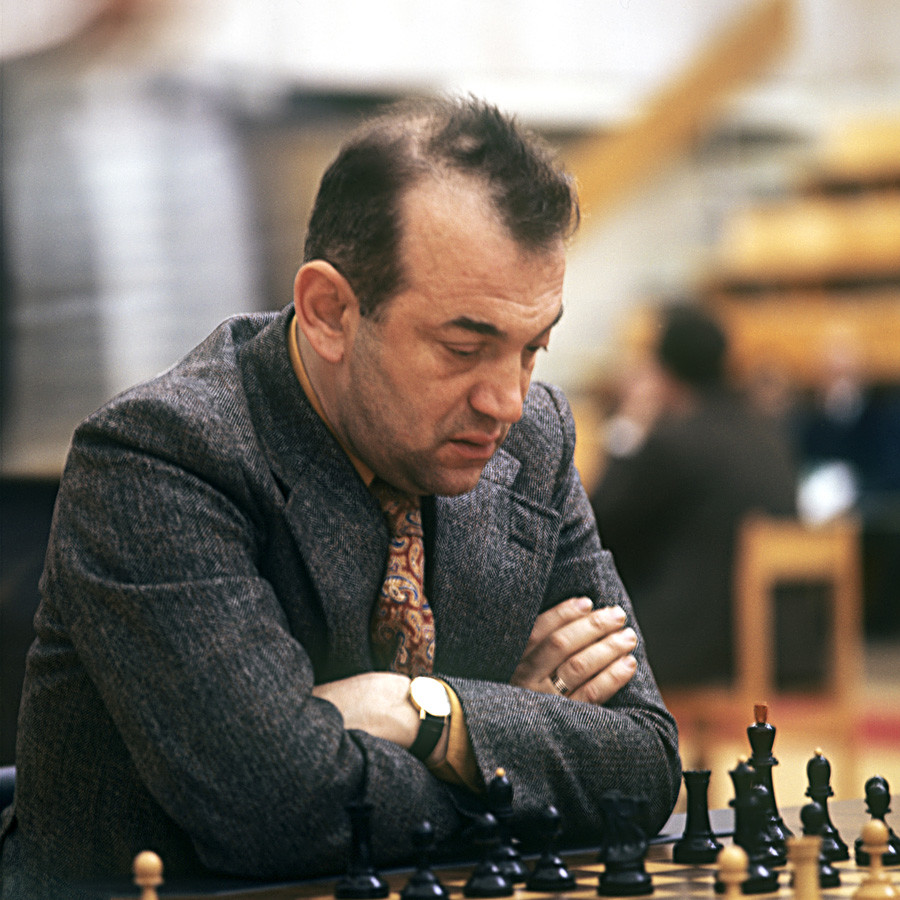 A strange spectator in the audience caught Korchnoi’s attention during the game. “A peculiar person appeared! He sat in one of the front rows and was eyeing me up, trying to get my attention. And his connection with Karpov was undeniable. He sat there for five hours straight, immovable, like a robot…One could sense colossal work going on in his mind!” Korchnoi wrote about Vladimir Zoukhar, a military psychologist and official member of Karpov’s team.

It’s common for chess grandmasters to consult psychologists during important tournaments to improve their sleep and help unwind after games, among other things. But Korchnoi was certain that he was the victim of parapsychology. He called it “anti-chess.”

Karpov became World Chess Champion in 1974 after his technical victory over legendary American Bobby Fischer. Four years later, Korchnoi was not only up against Karpov, but the whole Soviet Union. 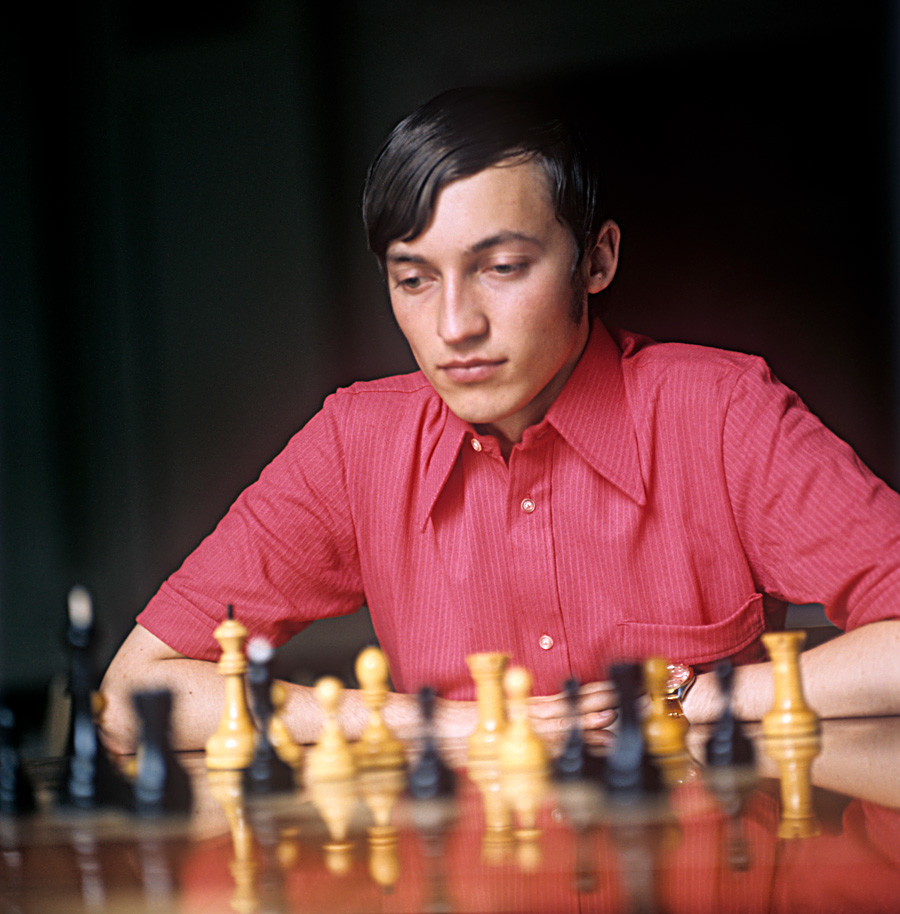 As a Jew who refused to stand up for the Soviet national anthem and someone who wasn’t afraid to publicly denounce the KGB’s surveillance of Soviet chess players traveling abroad, Korchnoi was oppressed in the USSR and slammed in the press. This is why he fled the Soviet Union in 1976, leaving behind his family, who were denied a way out. To make things worse, his son was being threatened with prison at the time for refusing to serve in the Soviet army. Korchnoi was declared a public enemy. Eventually, the Soviet grandmaster, ranked second in the USSR, was granted asylum in Switzerland – but by then he’d only spent a year in Europe, which wasn’t enough to be granted Swiss citizenship.

The Soviet leadership was willing to pull out all the stops the ensure Karpov triumphed over Korchnoi “the defector.” In 1978 in Baguio City, the Philippines, where the crunch match played out, the Soviet delegation numbered several dozen and included an alleged parapsychologist called Zoukhar.

Yogurt vs. the yogi 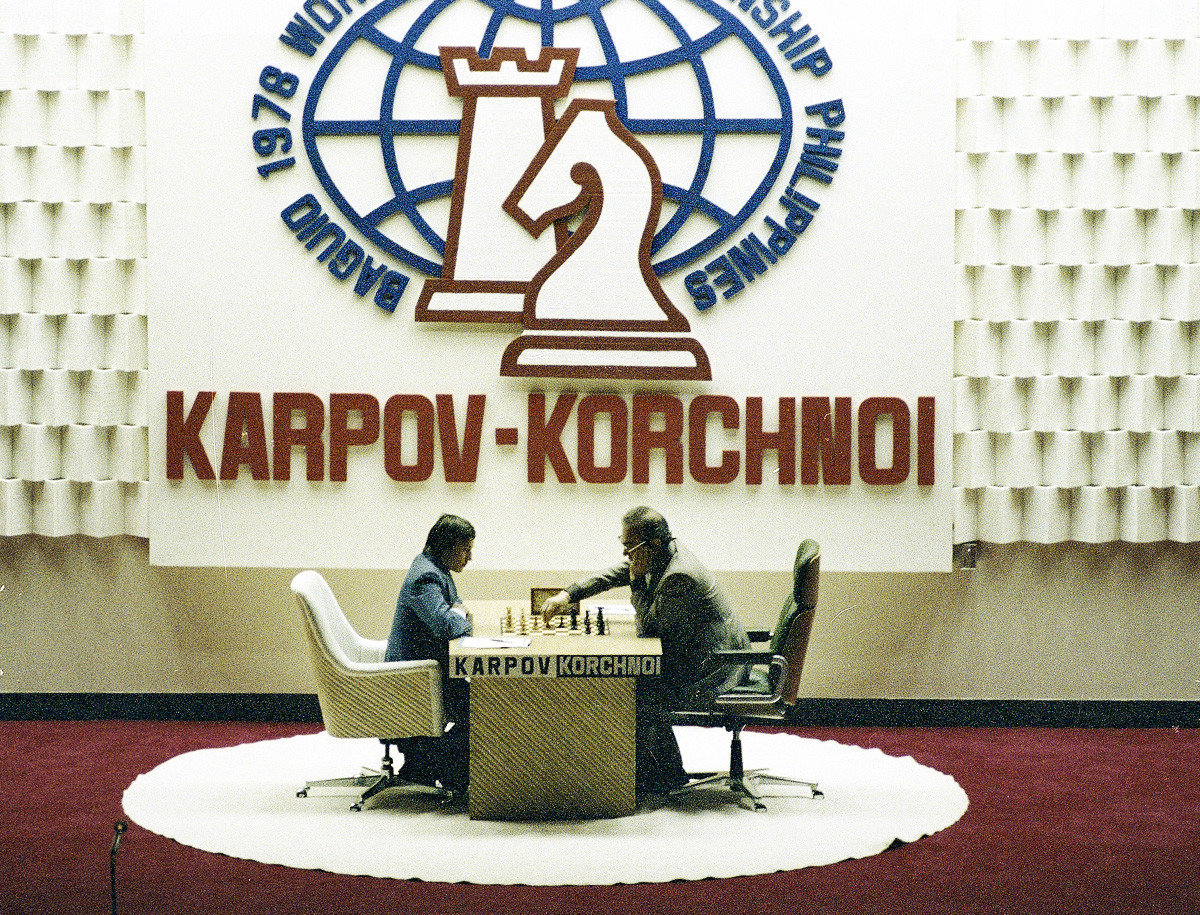 Chess players Anatoly Karpov and Viktor Korchnoi are seen during their second game in the Philippines, July 20, 1978

In a later interview, Karpov said that he invited Zoukhar onto his training team in 1974 during his match against Korchnoi in Moscow, after seeing Korchnoi enlist the help of psychologist Rudolf Zagainov. So despite the fact Zoukhar had been present at Korchnoi-Karpov games before, Korchnoi only started making a fuss about it in 1978.

“The audience could see the connection between Zoukhar and Karpov,” Korchnoi wrote. “At the beginning, Zoukhar was sitting upright; but when I started seriously analyzing the chessboard, he leaned back and closed his eyes – almost at the same moment Karpov, who wasn’t looking at the psychologist, started rocking in his chair!”

Korchnoi became paranoid about the situation. He complained to the referee and demanded that Karpov stop distracting him, to which the champion replied: “I’m distracted by his mirrored sunglasses!” Korchnoi wrote in his book that he wore shades “to deprive Karpov of his favorite activity: to stand at the table looking his opponent straight in the eye. While I was wearing glasses, he could only see his own reflection.”

In return, Korchnoi complained about Karpov’s team passing him yogurt during games. Korchnoi argued that either the yogurt’s color was communicating what his opponent’s next move should be, or that it was doping: “I noticed that after eating the yogurt, Karpov started playing at the speed of a machine gun!” Korchnoi claimed the yogurt was infused with cortisone steroids.

During later games, Karpov continued rocking in his chair, so Korchnoi retreated backstage where each player had a room where they could analyze the position of their pieces in peace for a period of time. When the 11th game came around, Korchnoi invited his own psychologist Vladimir Berginer from Israel – he sat in the fifth row unbeknownst to anybody. But it didn’t work well – by the 17th game, Karpov had cruised into a four-game lead. The first person to hold a six-game advantage would be declared the winner.

In the 17th game, Korchnoi became so frustrated that he demanded the first six rows of the conference hall be totally cleared of spectators, and the administration agreed. But Zoukhar just moved to the seventh row, where he was surrounded by Soviet officials and agents.

After the next game, Korchnoi dropped his psychologist and invited a pair of Harvard-educated yogi to help him. Steven Dwyer and Victoria Sheppard were members of the “Ananda Marga” meditative sect, and they agreed “to aid me free of charge,” Korchnoi wrote. “As soon as they appeared in the hall and sat in the lotus position, something happened to Zoukhar. He covered his face with a handkerchief and exited the hall for good! The other Soviets followed him. Two yogi managed to expel an entire delegation!”

The Soviets argued that the yogi should only be allowed to watch if they wore normal clothes, not their orange robes. Later, the Filipino authorities revealed that Sheppard and Dwyer had been out on bail since 1978 for the attempted murder of an Indian diplomat. As suspected criminals, the duo were removed from the auditorium and shortly after expelled from the Philippines for good.  But against all odds, after the yogi had left, Korchnoi went on a winning streak, and Zoukhar was nowhere to be seen.

“That’s when I lost sleep,” Karpov recalled. The Soviets were supposedly furious at the young champion for losing to the “despised and obnoxious” defector. There were rumors that Karpov was even considering defecting to the West himself – apparently, he was concerned that a grim outcome awaited if he lost.

“While Zoukhar was close to the stage, Karpov won five games against me and lost just one, and from the point, Zoukhar was removed – I won four games!” Korchnoi wrote. After losing 5:2, Korchnoi curtailed drew level on 5:5! 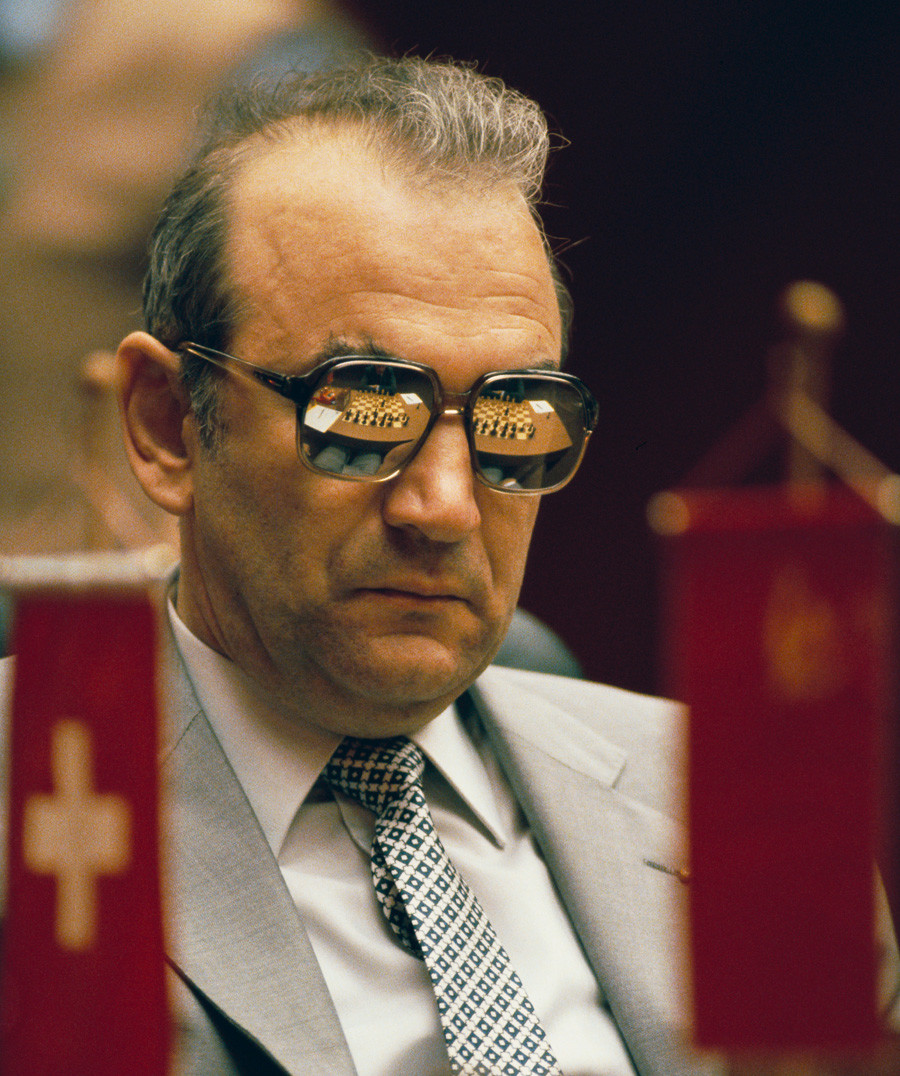 Korchnoi in Merano in 1981, his last major game against Karpov.

Karpov later said that he tried to use Zoukhar’s help in treating his insomnia with hypnosis, but the psychologist turned out to be a quack: “The first night and the second, he was useless. At six in the morning, I said: ‘Vladimir, please stop your attempts, I can hear you whispering. I’ll try to sleep myself.’ And Zoukhar replied: ‘You’ve got a strong nervous system, I can’t pierce through it’.” Karpov argued that the psychologist just liked to pretend that he was a powerful psychic in front of the foreign and Soviet press. That’s why he eyed Korchnoi and made a big show by abruptly departing when the yogi came. All this just distracted both players.

During the last game, when the score was 5:5, Zoukhar suddenly rocked up in the front row, surrounded by Soviet suits. This was too much for Korchnoi – he threw a full-fledged tantrum, argued with the tournament’s authorities for 15 minutes, and completely lost his cool. He started falling behind and used his right to postpone the game – but never managed to collect himself and refused to finish.

Karpov won the tournament 6:5 and received a congratulatory telegram from Leonid Brezhnev himself. He was even awarded an Order of the Red Banner of Labour when he arrived home. Korchnoi and Karpov faced off again in 1981, but the outcome was the same and Karpov ended up victorious. Maybe he was just a stronger chess player than Korchnoi...