How the Russians made the Kremlin 'disappear' during WWII 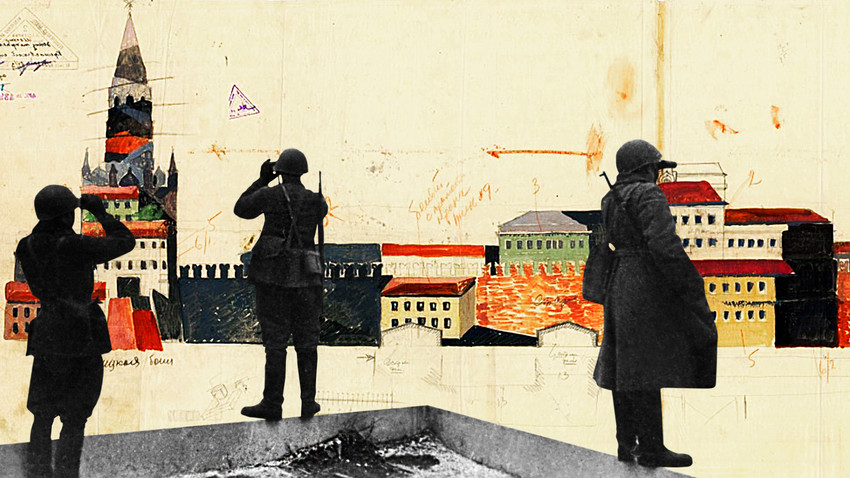 TASS, Archive photo
This was one of the greatest military deceptions of our time, involving hundreds of thousands of Moscow citizens. How on Earth did the Russians manage to conceal the Kremlin from Nazi bombardment?

During WWII, the Kremlin had withstood eight full-fledged air raids. 15 different aerial bombs, over 150 incendiary bombs, even an oil tank – that’s what hit Moscow’s medieval fortress during the war. But the Kremlin suffered no significant damage. How could this have been accomplished?

Making the Kremlin one with the city 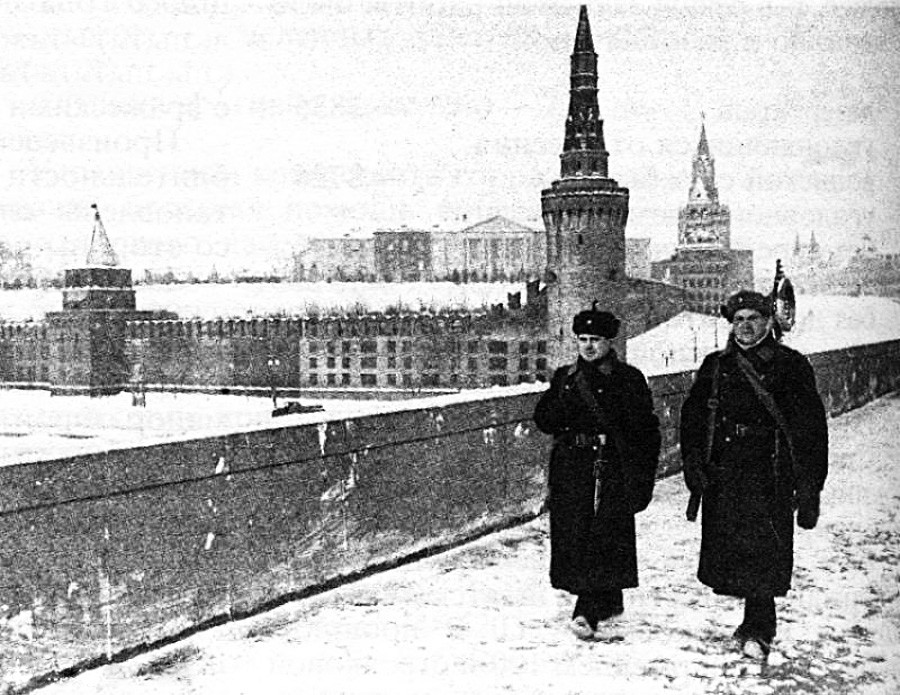 The Moscow Kremlin as seen from the Bolshoy Moskvoretsky Bridge. The Kremlin walls and towers are made to look like apartment houses.

Nikolay Spiridonov, the commandant of the Moscow Kremlin in 1938-1953, was concerned with the Kremlin’s security right from the early days of the war. The Kremlin was not only the citadel of the Soviet government it was also the spiritual symbol of the country. So Spridonov sent a secret message to the People’s Commissar for Internal Affairs - the infamous Lavrentiy Beria, who ordered the start of the operation intended to mask the Kremlin right away.

The task wasn’t easy, and involved hiding 28 square hectares of territory in plain sight, which included tall buildings, like the Kremlin towers and Ivan the Great bell tower! On July 22nd, 1941, a 250-kg German bomb struck the Kremlin Palace but didn’t explode 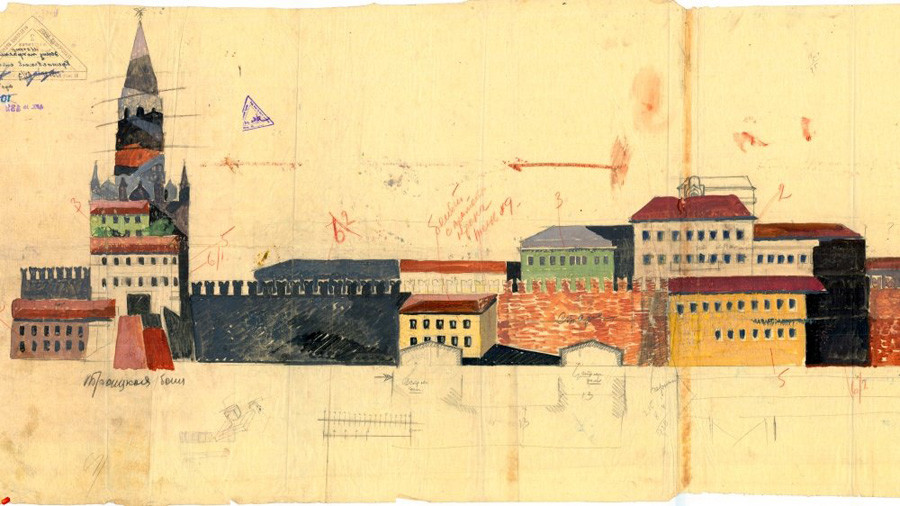 the Kremlin towers were re-painted using different colors and covered with wooden tents. Every roof inside the Kremlin was painted rusty brown so as to make them indistinguishable from typical Moscow roofs. The Kremlin grounds, paved with cobblestone, were covered up with sand. Tents painted to look like roofs were stretched over the Kremlin gardens, with facades of the buildings also painted to confuse the German pilots.

The ingenious plan was concocted by Boris Iofan, the most prominent and prosperous Soviet architect of the time 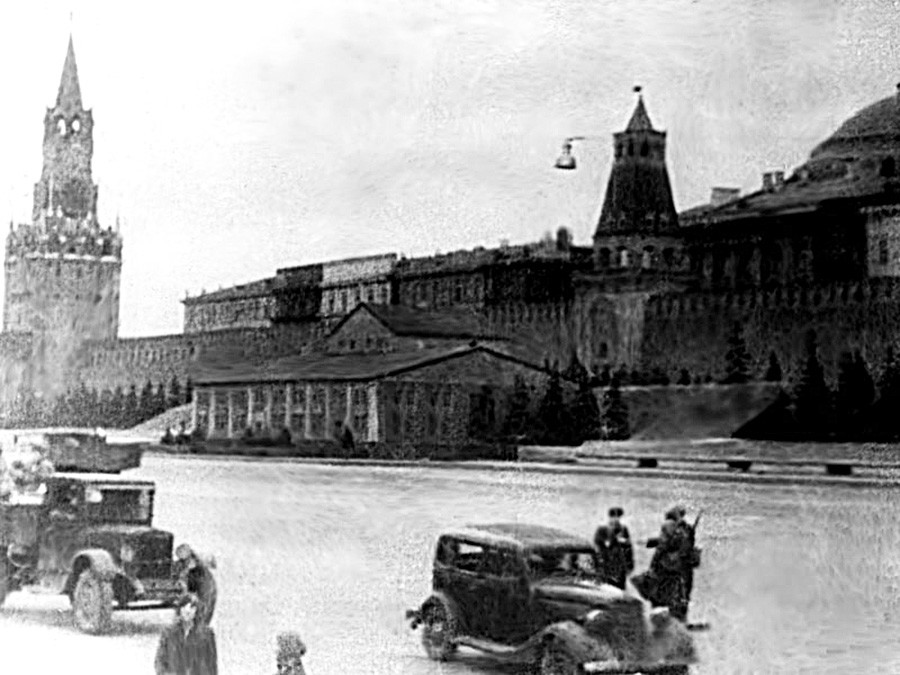 The Lenin Mausoleum disguised as a wooden house

of the enemy’s main targets was Lenin’s mausoleum. It was hidden under a giant square wooden tent to make it look like a building. Lenin’s body was transported away from the capital and returned only in 1945. 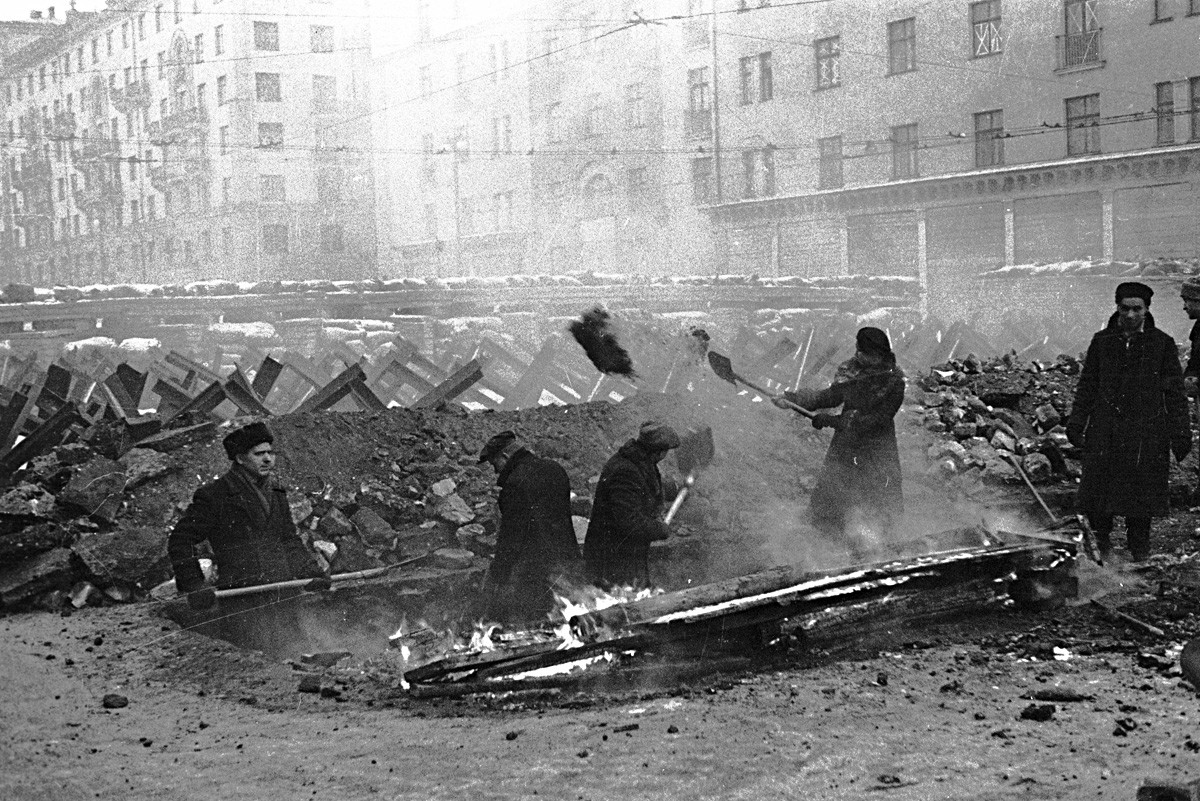 Kremlin’s safety wasn’t the only concern. There was also all of Moscow to consider. Strict security measures were enacted, and hundreds of thousands of Muscovites got to work securing the capital.

The city’s population numbered around 4.6 million at the time (the population was diminished by more than half that figure following .) Many Moscow citizens had been in civil defense training in the years preceding the war, and now, sadly, it was time to apply their knowledge. Putting out incendiary bombs, covering windows with duct tape, observing a strict curfew (from 12 to 5 AM, all car and pedestrian traffic in the streets was banned). Over 200 plants and factories were evacuated from the city, while most of the remaining ones produced goods, ammo supplies for the battlefront 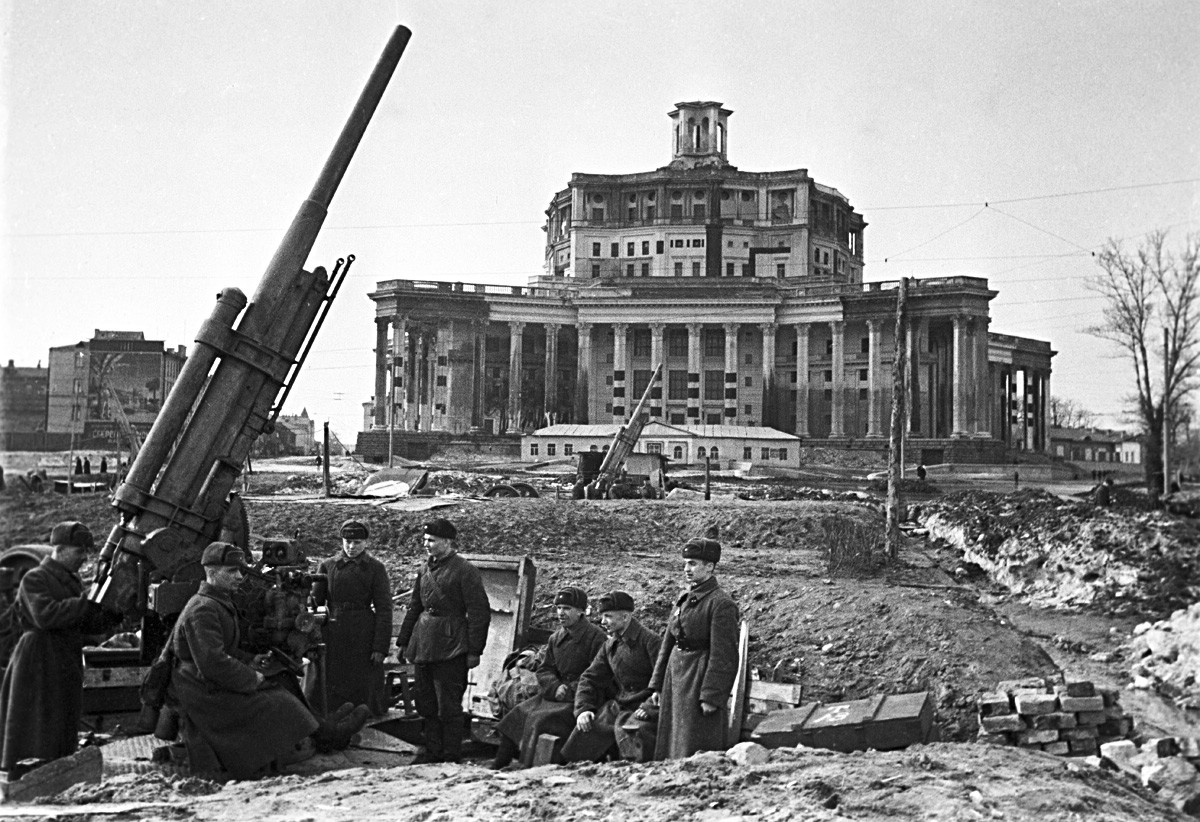 200 thousand volunteers applied at the people’s fire squads. Hundreds of thousands of Moscow people were involved in building barricades inside the city – for this type of work, people were assigned by the government (no salaries were paid, of course.) On top of that, the Muscovites had constructed two vast defense lines outside the city. Their remains can still be found in the Moscow Region’s forests.

Prosthetic buildings appeared all over the while existing ones were rendered unrecognizable with deceptive measures. Streets and roads were painted to look like dirt, while false streets had been painted across uninhabited areas, parks and so on. The Leningrad highway, the main road between Moscow and the north, had strategic purposes, so it was masked especially thoroughly with wooden screens imitating rooftops.

‘Mom was always on the roof putting out bombs’ 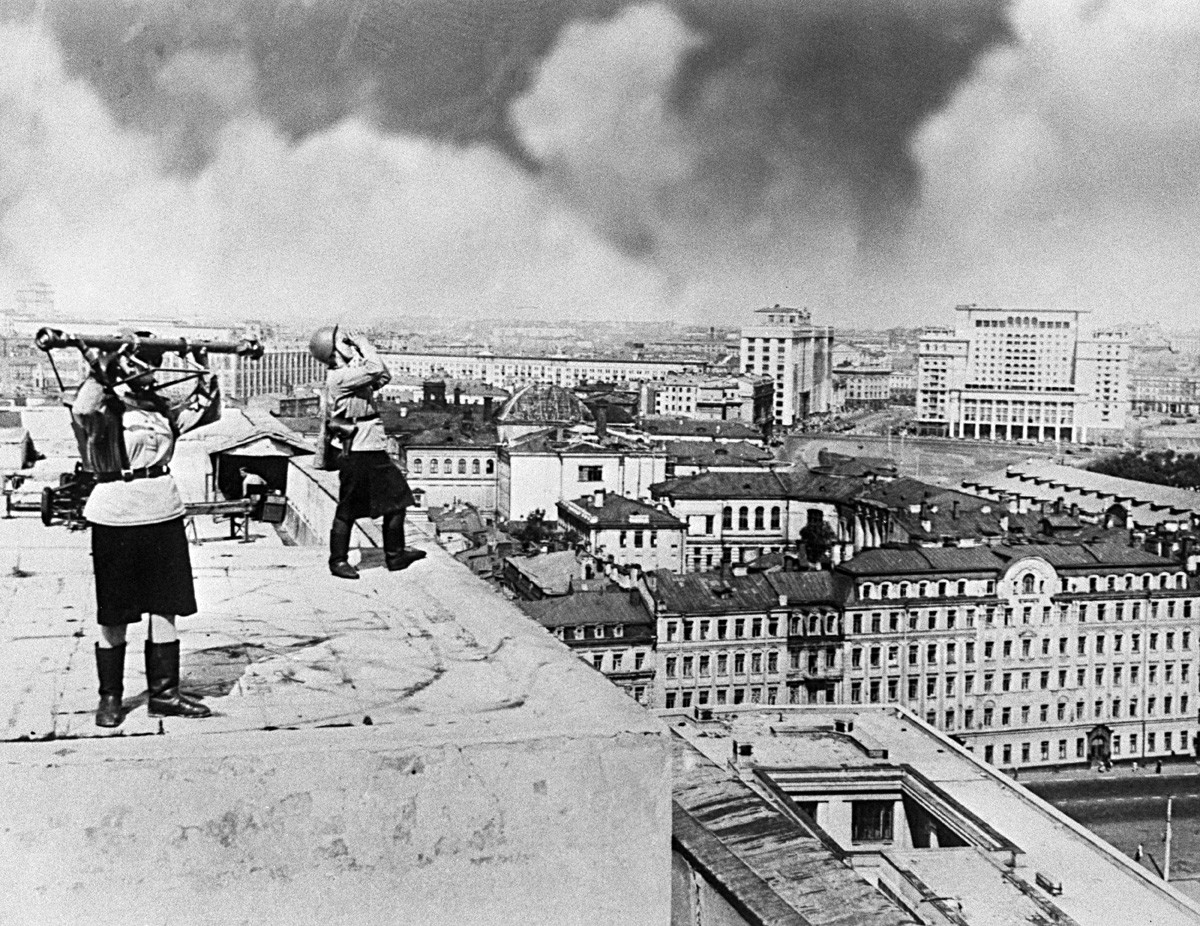 Sentry post on the roof of the Bolshoi Theatre.

In his diary, Nikolay Verzbitsky, who lived in Moscow during the war, described November 7th, 1941: “A somber celebration (anniversary of the October Revolution - ed.) A demonstration walks in the street – 200 men and women with shovels and crowbars. It’s cold, it’s windy; snowing heavily. Huge lines for potatoes and bread. The radio malfunctioned in the morning – they say it’s the Germans corrupting the broadcast. Several hundred tanks took part in the parade on Red Square, which calmed the Moscow public a bit. But some say: ‘Why are these tanks at the parade, they must be out on the front lines!’ Stalin said the war will last for several months, half a year, maybe a year…”

To hide strategically important factories, sometimes their camouflage copies were created – this has worked in the Nizhny Novgorod region, where a glass-and-cardboard copy of the local automobile plant was created on the outskirts of the city. The copy was lit day and night, so many German bombs were mistakenly dropped over it, preserving the actual factory 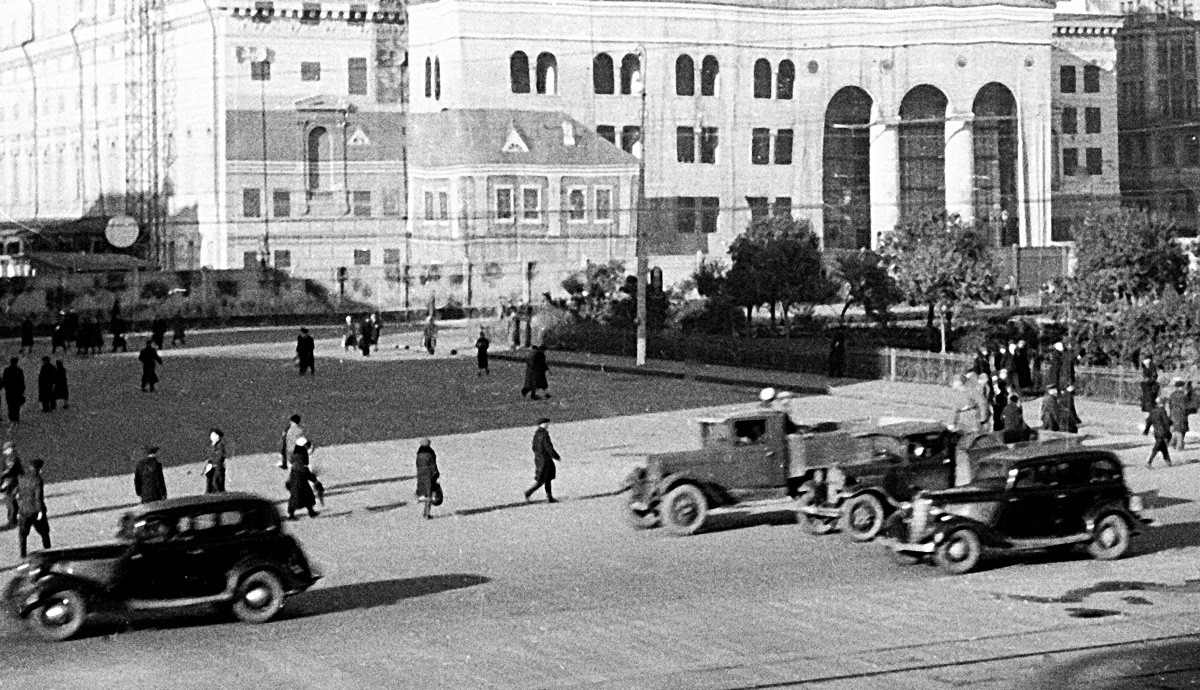 The Bolshoi Theatre disguised as an apartment house

, Moscow has suffered 95 German aerial raids by night and 30 raids during the daytime, carried out by 7200 bombers. Citizens were assigned specific types of activities: some were to put out the incendiary bombs. As Tamara Rybakova recalled: “Bombs were falling close by, hitting the roof of our house, also. They were put out by grown-ups who kept watch on the roof, my mom was among them. After each raid, my friends and I went out onto the street, collected debris into sacks and delivered them to scrap metal collection points. It was very scary, when the siren went off, everybody rushed to the bomb shelters. I was sad that mom never went with us to the shelter, she was always on the roof disposing of bombs.”

That doesn’t mean life in the city stopped. After the immediate threat had been liquidated and the deception was done with, the Moscow Conservatory reopened. The Moscow University didn’t stop working during the war either – 106 doctor degrees and 520 candidate degrees were issued in 1941-1945. Libraries and kindergartens functioned, as well as theaters and cinemas, which mainly ran patriotic plays and movies.