Before and after: Moscow streets during WWII and now 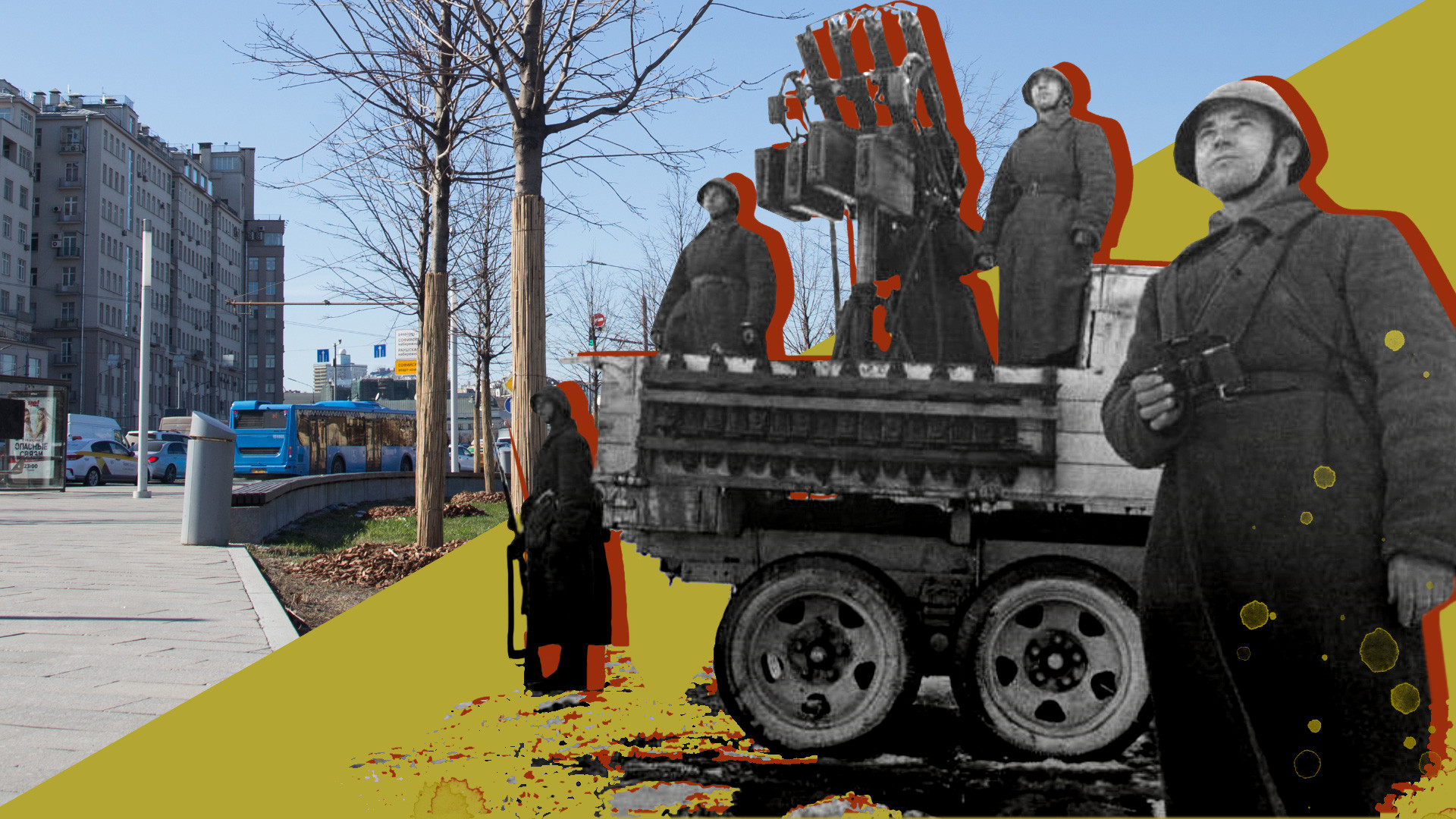 MMAM, Antov Usanov/Mosgortur
When the war broke out in 1941, Muscovites camouflaged the Bolshoi Theater from air attacks and placed barricades near the residential houses. It’s a staggering contrast having a look at the very same places today. 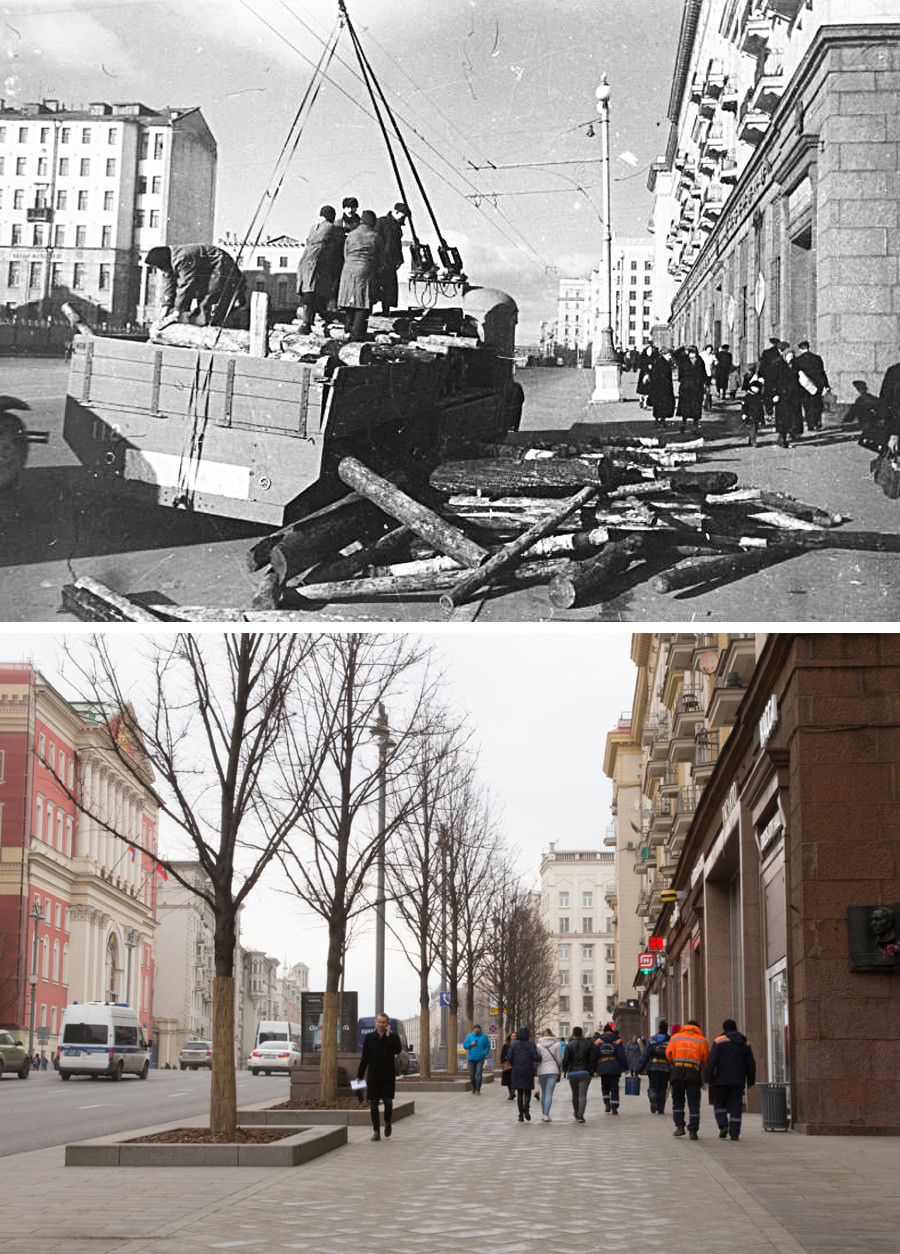 Right after the Nazi forces’ first attack, most of Moscow’s buses and trucks were requisitioned for the needs of the Red Army, as well as fuel and gas. That’s how the trolleybus became the main public transport. The city needed coal and wood for heating, and some of the trolleybuses were turned into cargo vehicles, like the one in the photo. To this day, Moscow has one of the largest trolleybus networks in the world. 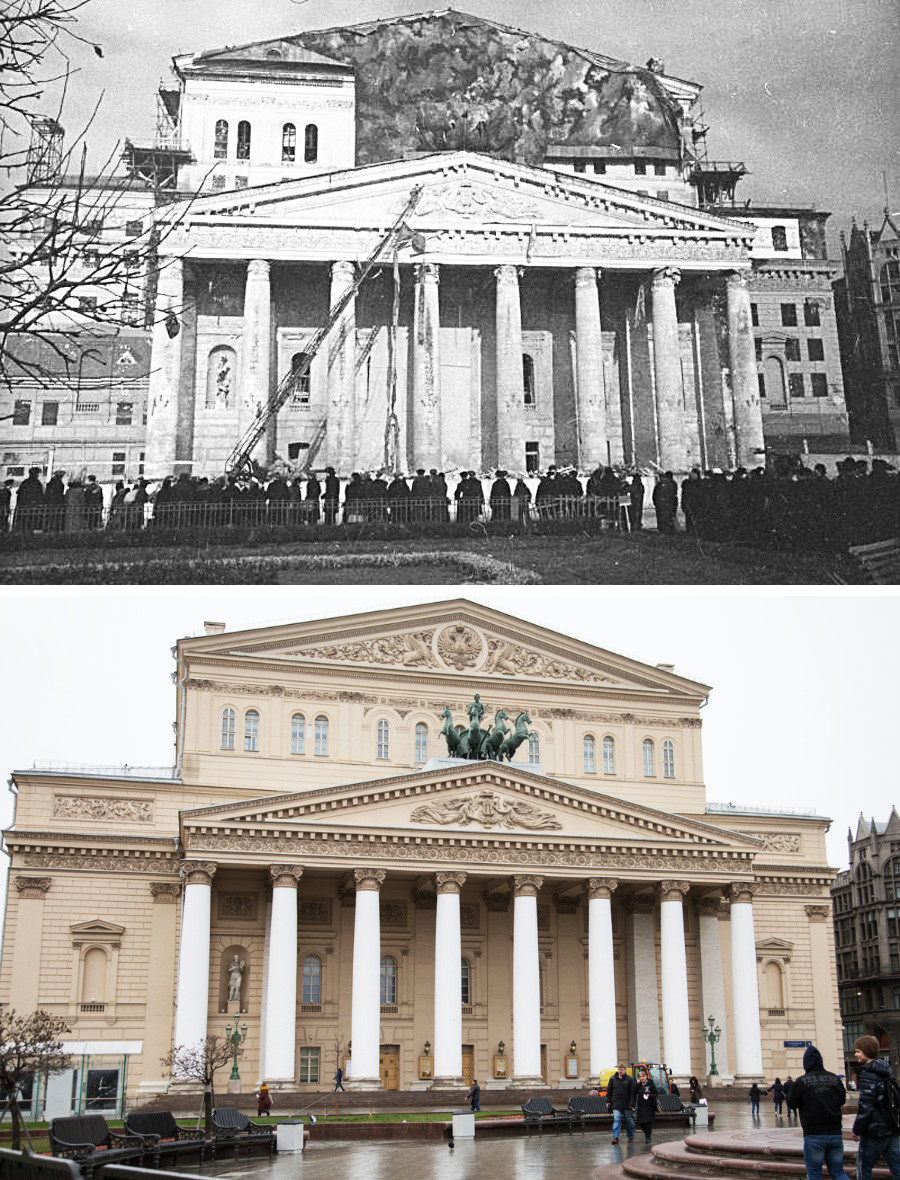 In summer 1941, Moscow’s center was completely camouflaged: all factories, bridges, telegraph stations, the Kremlin and the Bolshoi Theater were hidden from possible air strikes. Various methods were used: from contrast coloring of surfaces to the installation of architectural fakes. And still, the Bolshoi managed to get severely damaged, when on October 28, 1941 a 500 kg air bomb hit its façade and blew up the hall. The reconstruction of the country’s’ favorite theater took two years and only in 1943 re-opened the new opera season with Ivan Susanin. 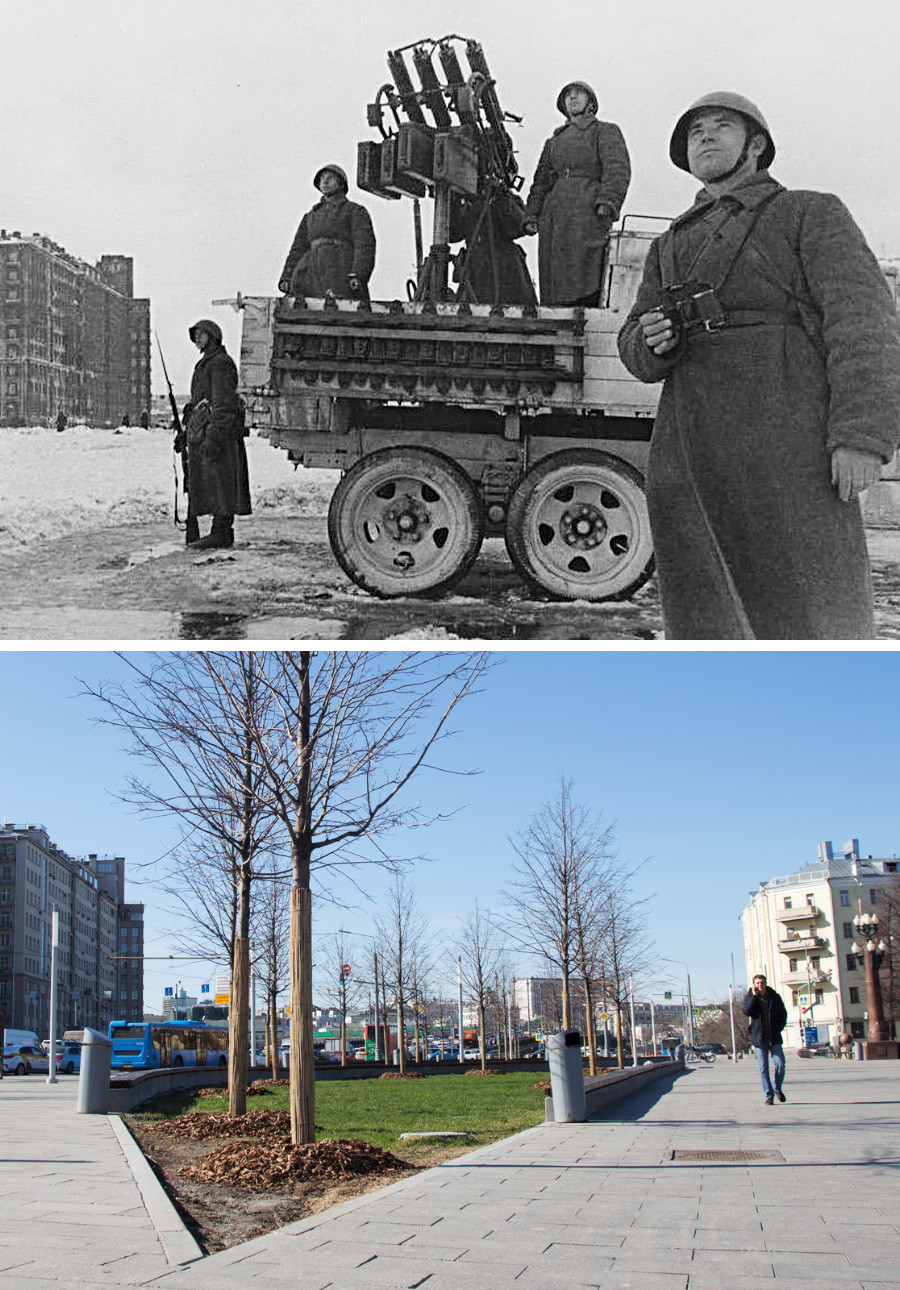 The residential complex at the Bersenevskaya embankment was built between 1927-1931 for the Soviet elite, which is why it was nicknamed ’The Government House’, and later – ‘House on the Embankment’. Two hundred Soviet ministers and their deputies, 15 marshals and five admirals all lived here. In the fall of 1941 the house was uninhabited, and anti-aircraft troops were stationed on its roof. Almost all residents of this complex went on the battlefield, and a third of them never returned. 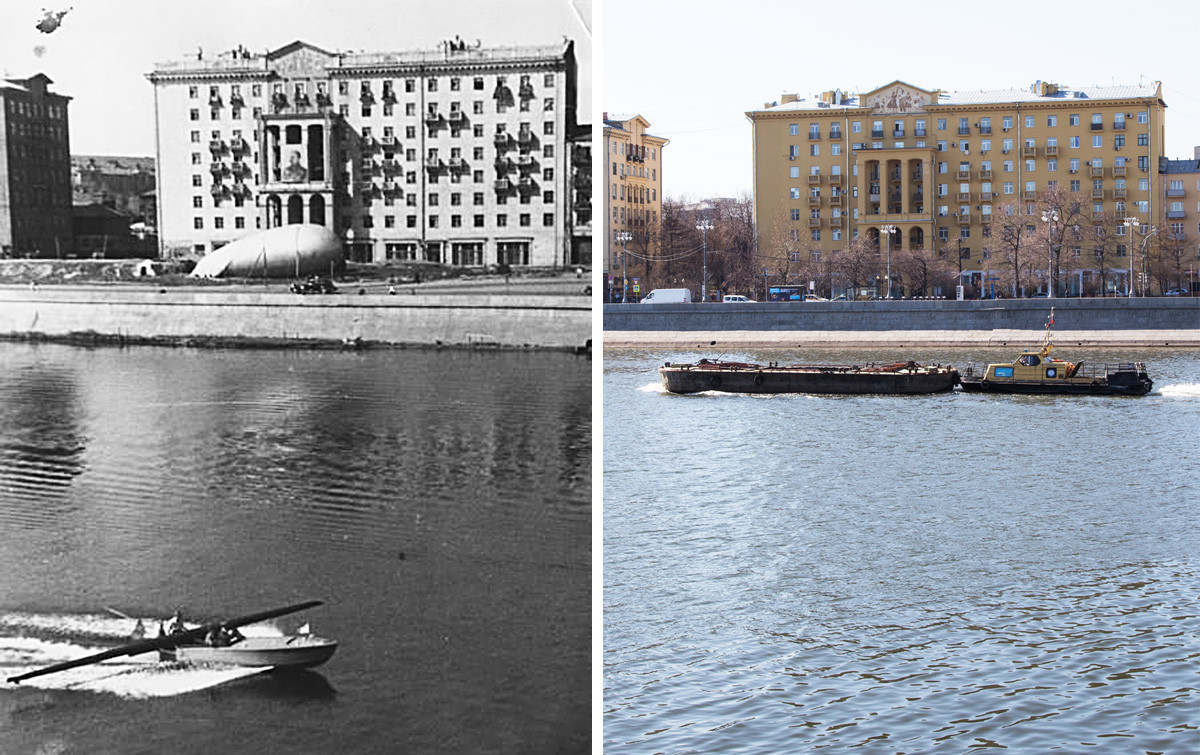 The first balloon “barricades” in Moscow were deployed in three places: at Alexandrovsky Garden right next to the Kremlin walls, on the territory where the modern Cathedral of Christ the Savior now stands and Zaradye Park. In total, there were more than 300 military balloons deployed in the capital to protect the Kremlin from airstrikes. The balloons were hoisted up one by one to the altitude of 4 km and Luftwaffe planes would crash into the taut metal ropes.

5. Barricades at the Dorogomilovskaya Outpost, 1941 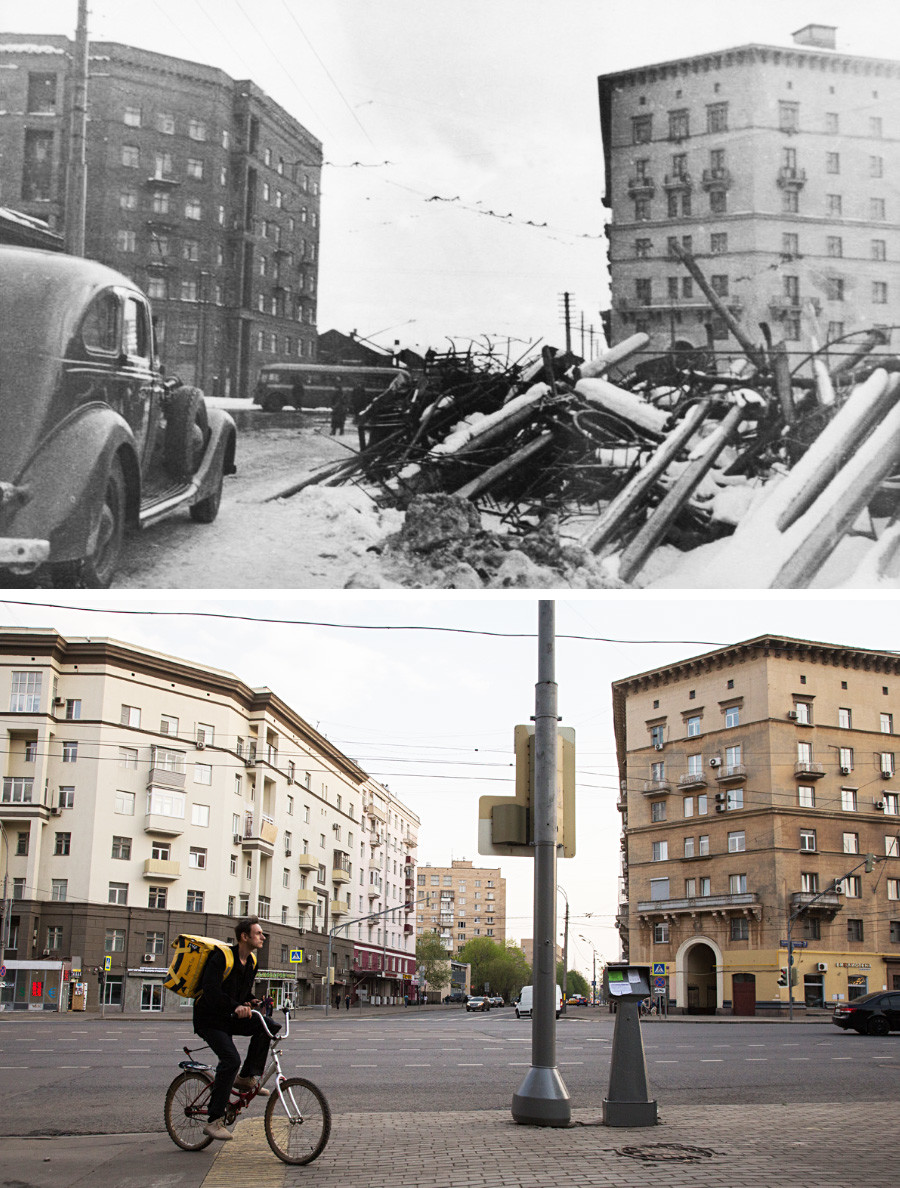 In the beginning of the 19th century, this neighborhood was considered far from the city center; now, it’s a part of it. However, right before the war, new residential complexes were built here and there were plans to dig a new water canal there, which ultimately never happened. 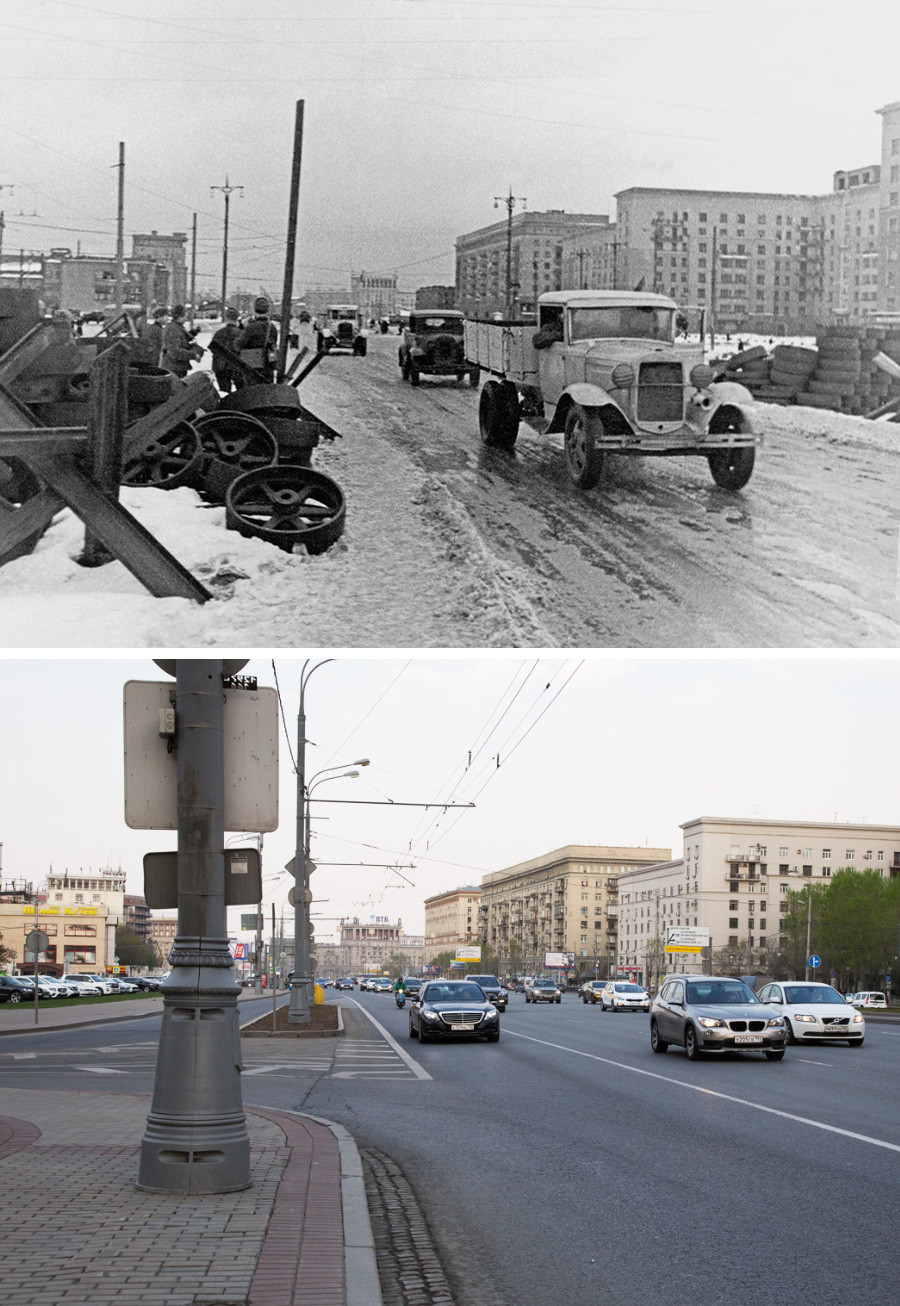 This strategic road linked Moscow with the Mozhaisk defense line, one of the four fortified districts around the city. On the photo, the military vehicles ride past the place where the modern Battle of Borodino museum is now located. 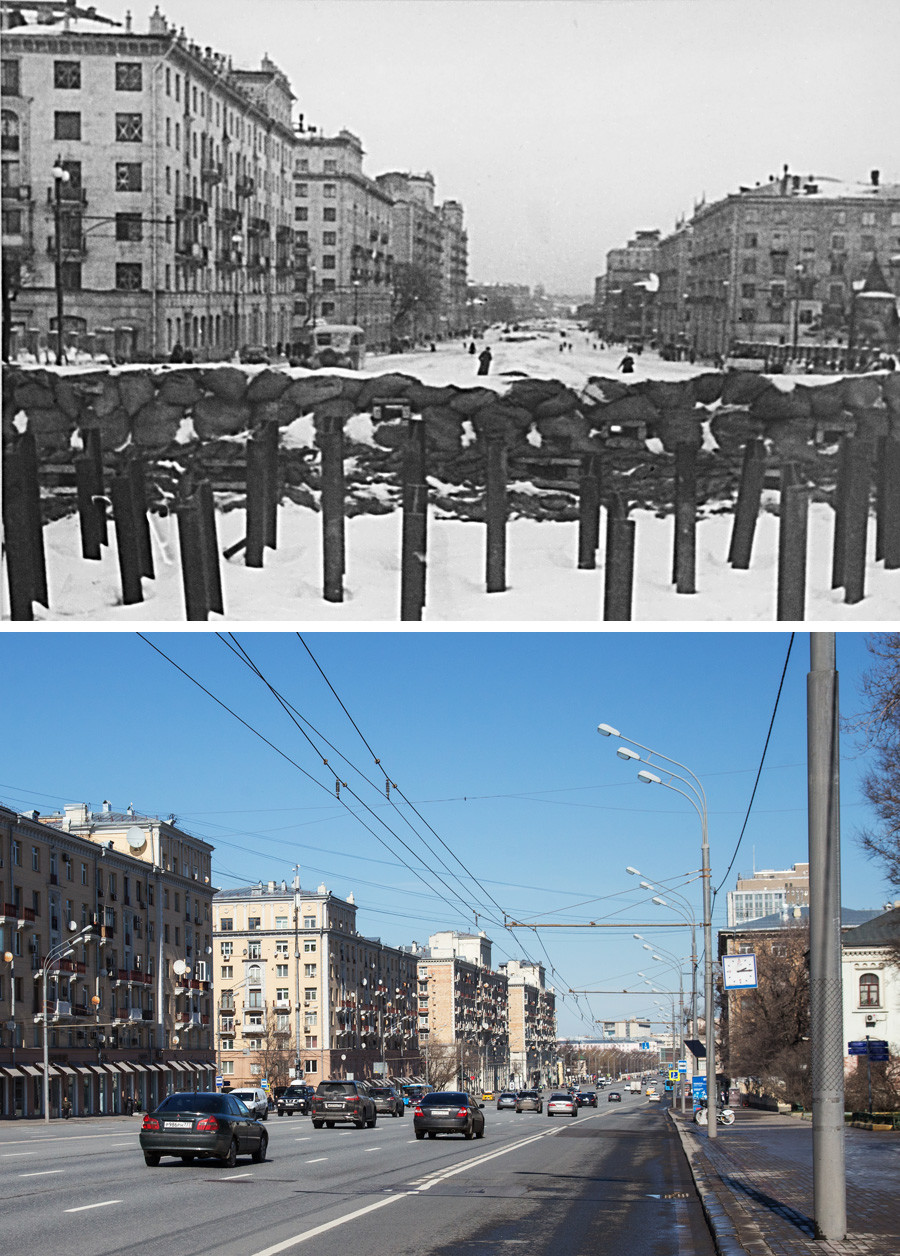 After the Mozhaisk defense line was breached, Moscow was officially besieged. 10 km of barricades, 24,000 anti-tank obstacles and 46 km of wired fences were installed around the city. Windows were glued with paper ”Xs” to prevent glass from scattering during the bombings. In total, Moscow was hit by air strikes 72 times during the war, mostly in the fall of 1941. 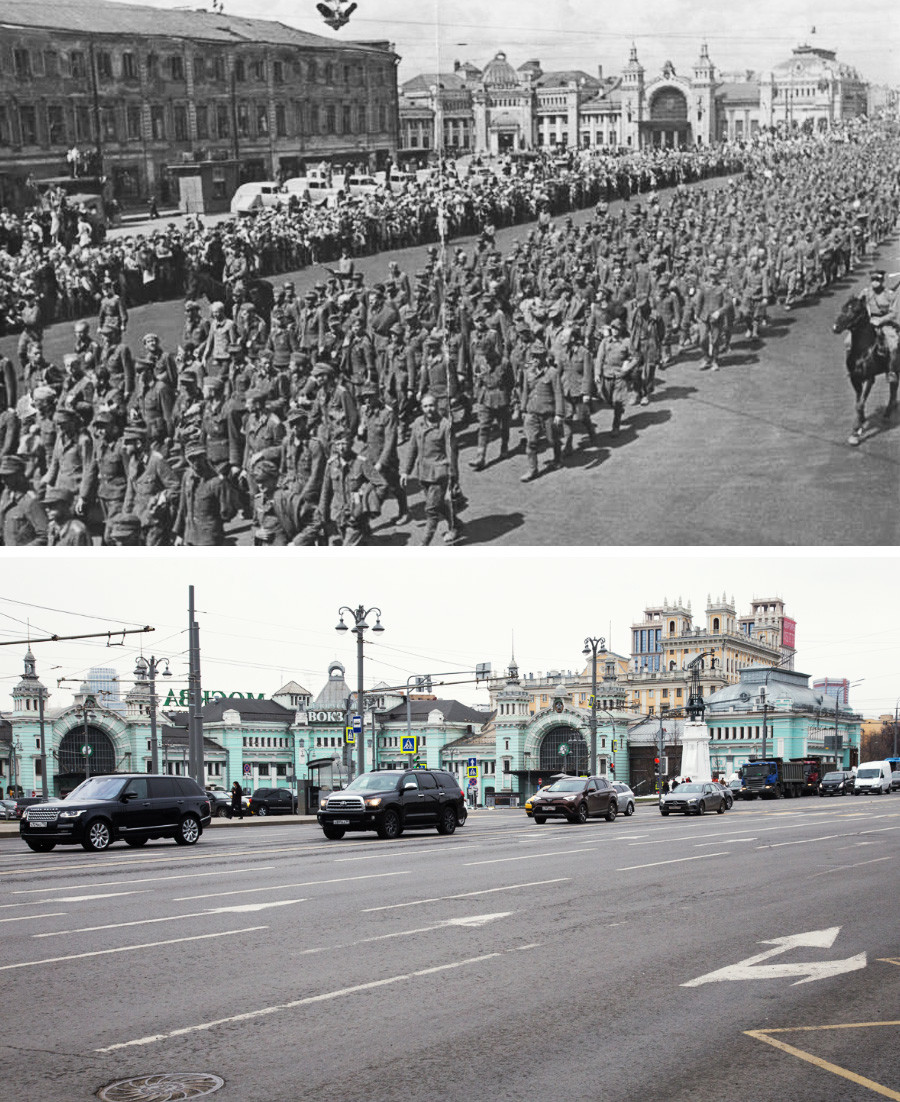 On July 17, 1944, 57,600 soldiers and officers of the Wehrmacht marched through Moscow’s streets. This "parade of the vanquished" lasted for several hours. They were followed by water trucks that symbolically ‘washed away’ the memory of the failed invaders of Moscow.