Russians who took the NHL by storm or by stealth

History
Nikolay Shevchenko
AFP
Some had to flee the country to play in the NHL, others were snapped up for millions of dollars.

The first Russian émigré to play in the NHL was born in 1911. The then Russian Empire was ruled by Nicholas II, and the Bolshevik revolution was still a few years off.

David Shriner was born in Saratov, in a province of the Russian Empire. Although his family emigrated from the Russian Empire when he was still a baby, he had the honor of becoming the first "Russian" in the NHL. During his hockey career, Shriner lifted the Stanley Cup twice (1941/42 and 1945/46) and earned a place in the Hockey Hall of Fame. 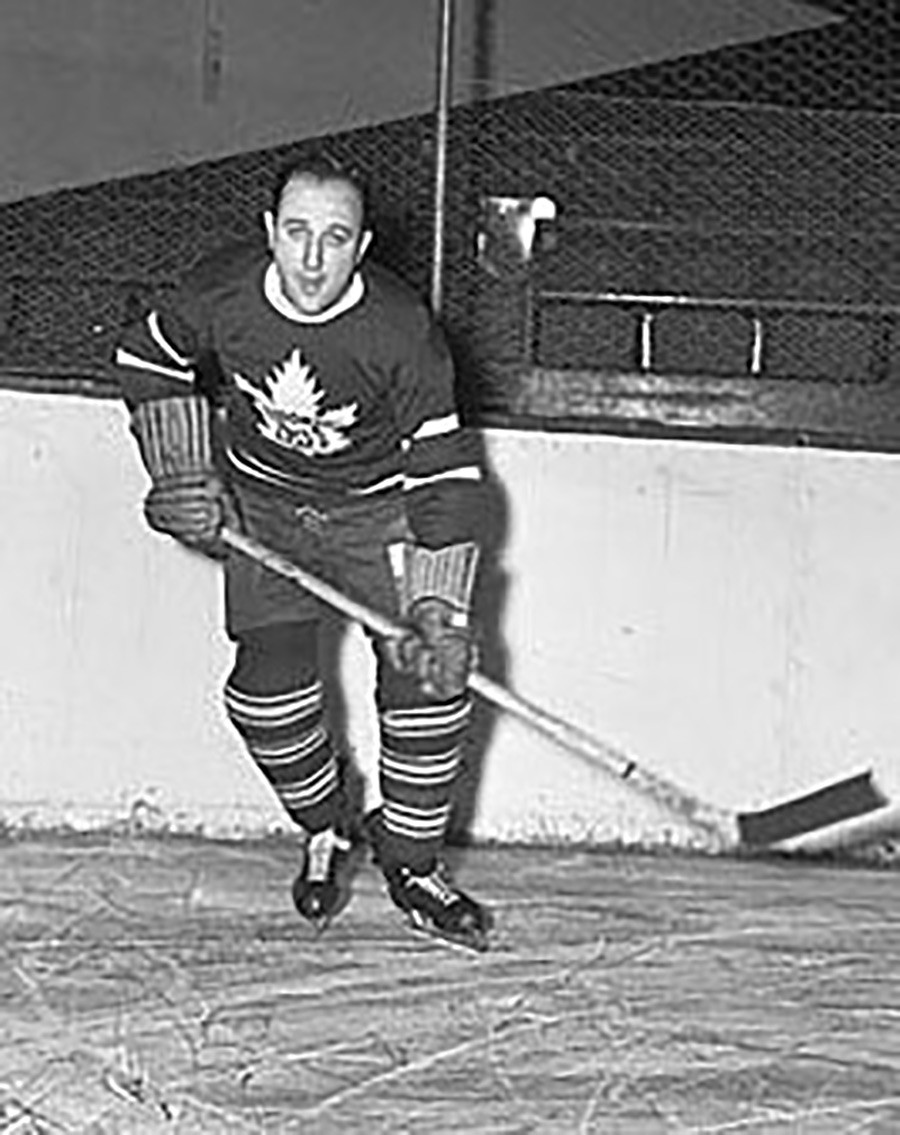 Only in the early 1980s did the first native of the Soviet hockey school break into the NHL. In doing so, Viktor Nechaev married a U.S. citizen, was forced to quit his studies, and lost his Soviet citizenship. Unfortunately, the career of the Soviet pioneer overseas did not pan out well. In the NHL, he played only three matches for the Los Angeles Kings, and his first NHL season was also his last: Nechaev was promptly transferred to the farm team, where he was injured and benched. The first Soviet player in the NHL never returned to the sport’s top flight. 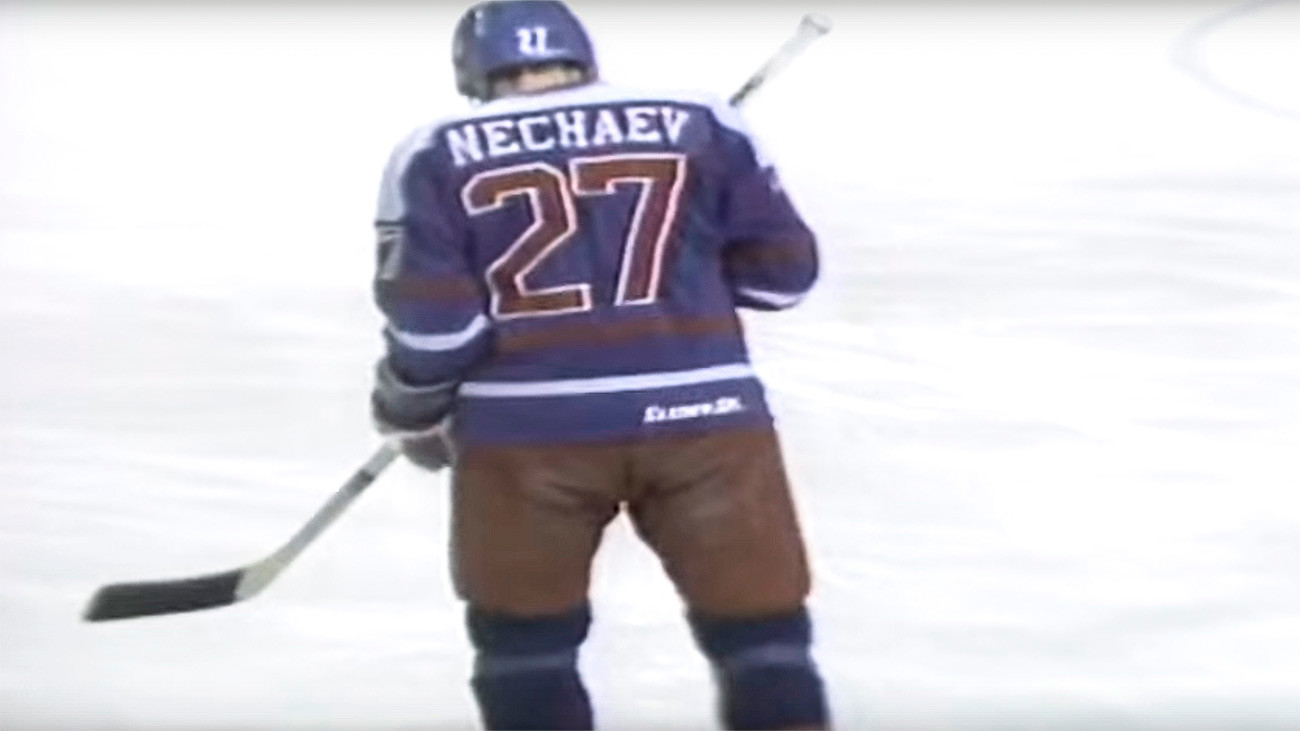 Whereas Nechaev had to take risks to leave the USSR and play in the U.S., his compatriot Sergey Pryakhin was more fortunate – he became the first Soviet hockey player to be officially allowed by the Soviet leadership to play in the NHL.

On March 30, 1989, The New York Timeswrote about the “historic role” that befell Pryakhin, contrary to the expectations of hockey experts, fans, and professionals alike. Many had mistakenly believed that Vyacheslav Fetisov, a far more prominent player and star of Team USSR, would be the one to take this historic step. 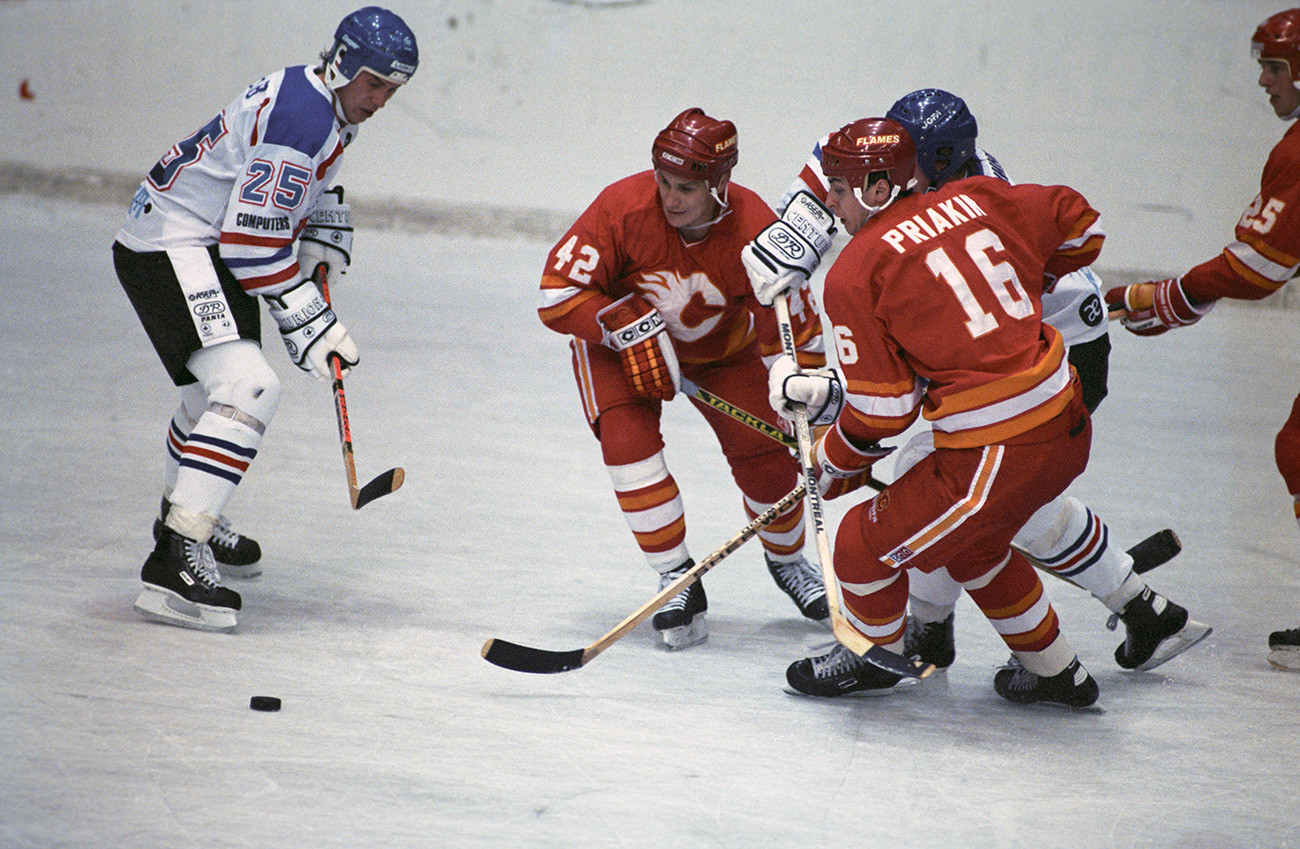 The first historic agreement between the NHL and the USSR paved the way for more Soviet hockey players to enter the “capitalist league.” But the terms of such agreements were not always fair to the players themselves.

Under contract with the Calgary Flames, the first Soviet legionary was supposed to receive the, by Soviet standards, unimaginable sum of $125,000 a year, plus a $150,000 bonus. But it could not be paid to him personally, so instead went to the USSR Ice Hockey Federation.

“The Soviet authorities fleeced me. I had a great contract, but had to feed the bureaucrats. I hardly saw any of the money myself,” the Soviet player later recounted, whose team also won the Stanley Cup. 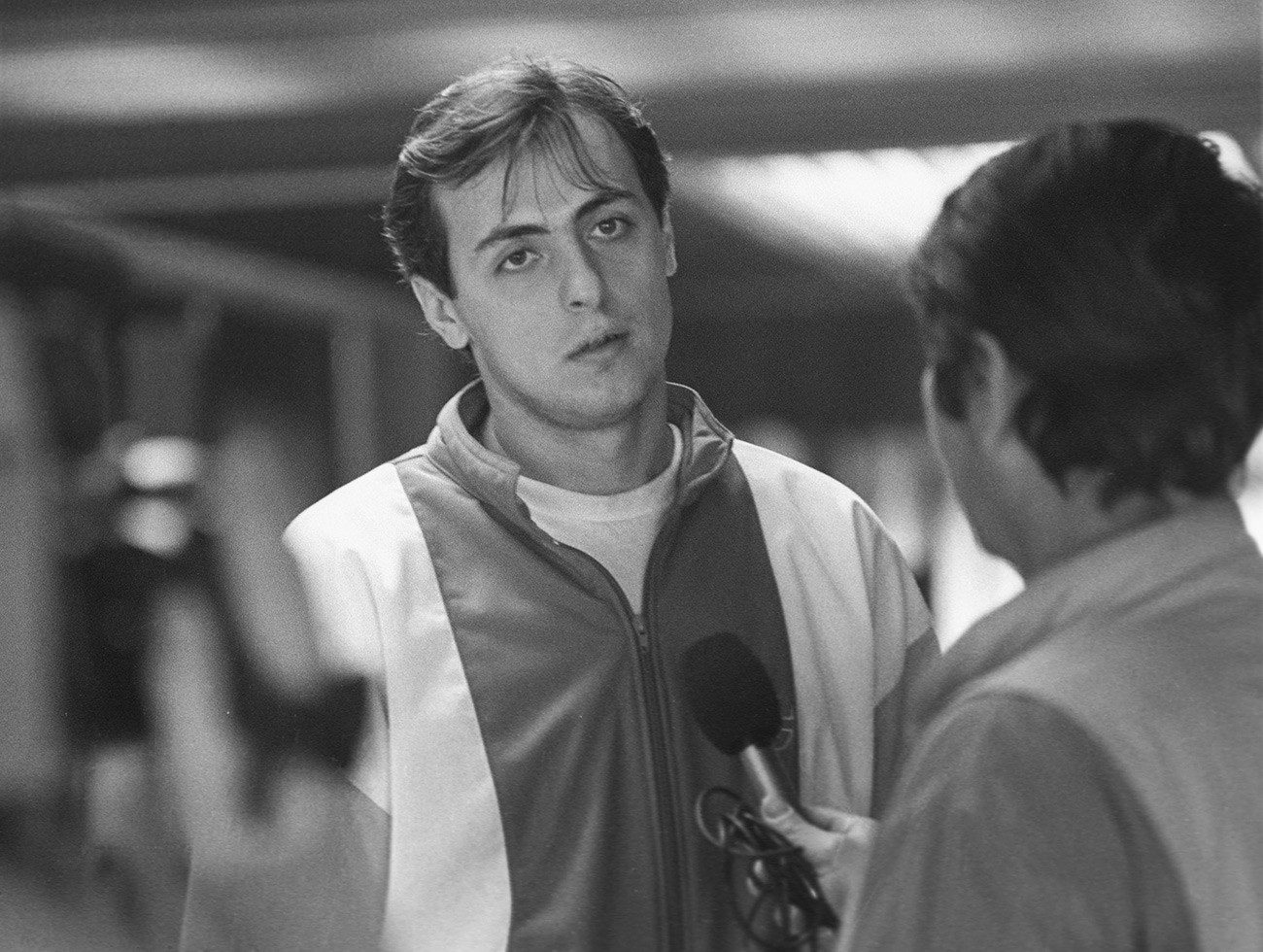 Although Pryakhin enjoyed a relatively successful time in the West, for many Soviet hockey players the NHL remained an impossible dream. Those who wanted to play without official permission had to tunnel under the Iron Curtain and burn all bridges with the Soviet state.

On May 9, 1989, 20-year-old Alexander Mogilny requested political asylum in the U.S. Since back home in the USSR he played for CSKA (affiliated to the Soviet army) and was liable for military service, his escape tantamount to desertion. Many friends and teammates turned their back on him, and the KGB took up his case.

“I was an Olympic champion, world champion, and three-time USSR champion, yet I didn’t own a single square meter of living space. Who needs such a life? What was point of all those medals and awards? I left Moscow a poor man,” Mogilny said later.

The runaway player made history by becoming the first ever Russian captain in the NHL. During his time in the States, Mogilny morphed into one of the most successful Russian players ever, scoring 473 goals. He was allowed to return home only in post-Soviet 1994. 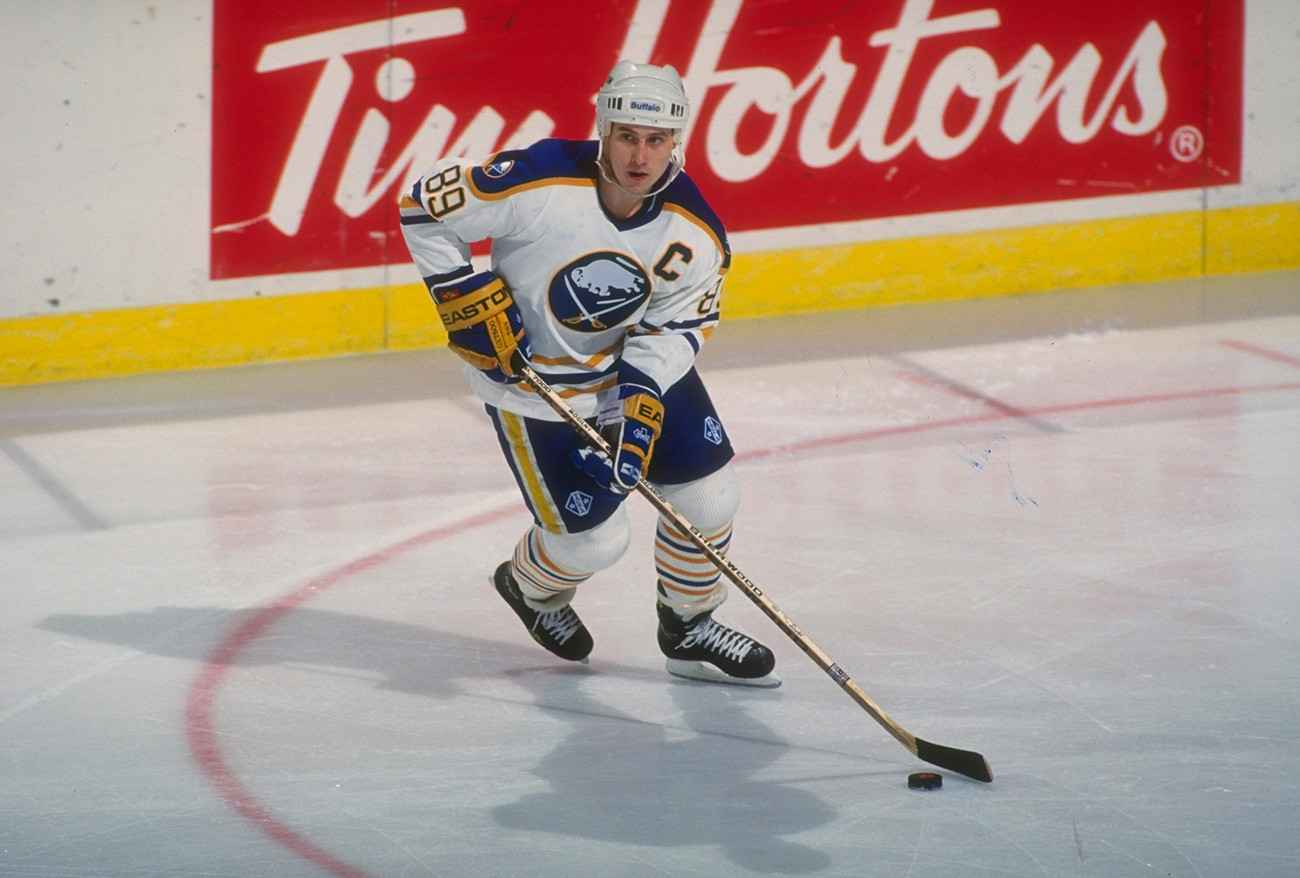 After the collapse of the Soviet Union in 1991, it became much easier for hockey players from the new Russian Federation to land in the NHL. It was during this period that the National Hockey League picked up some of its most famous Russian names.

Pavel Bure, subsequently named one of the 100 greatest players in the league’s history, became an instant legend.

Straight away, Bure became the highest paid Russian player in the NHL, and received the official title of best newcomer in the 1991/92 season.

He was nicknamed the “Russian rocket” for its phenomenal speed over the ice. Yet despite being one of the most successful forwards in NHL history, the coveted Stanley Cup eluded him.

His team, the Vancouver Canucks, came closest in the 1993/94 season, losing 4:3 to the New York Rangers in the finals. Just one season later, however, a clash with Chicago marked the beginning of the end of Bure’s superlative NHL career. The “Russian rocket” tore the ligaments in his right knee, and it turned into a chronic injury. 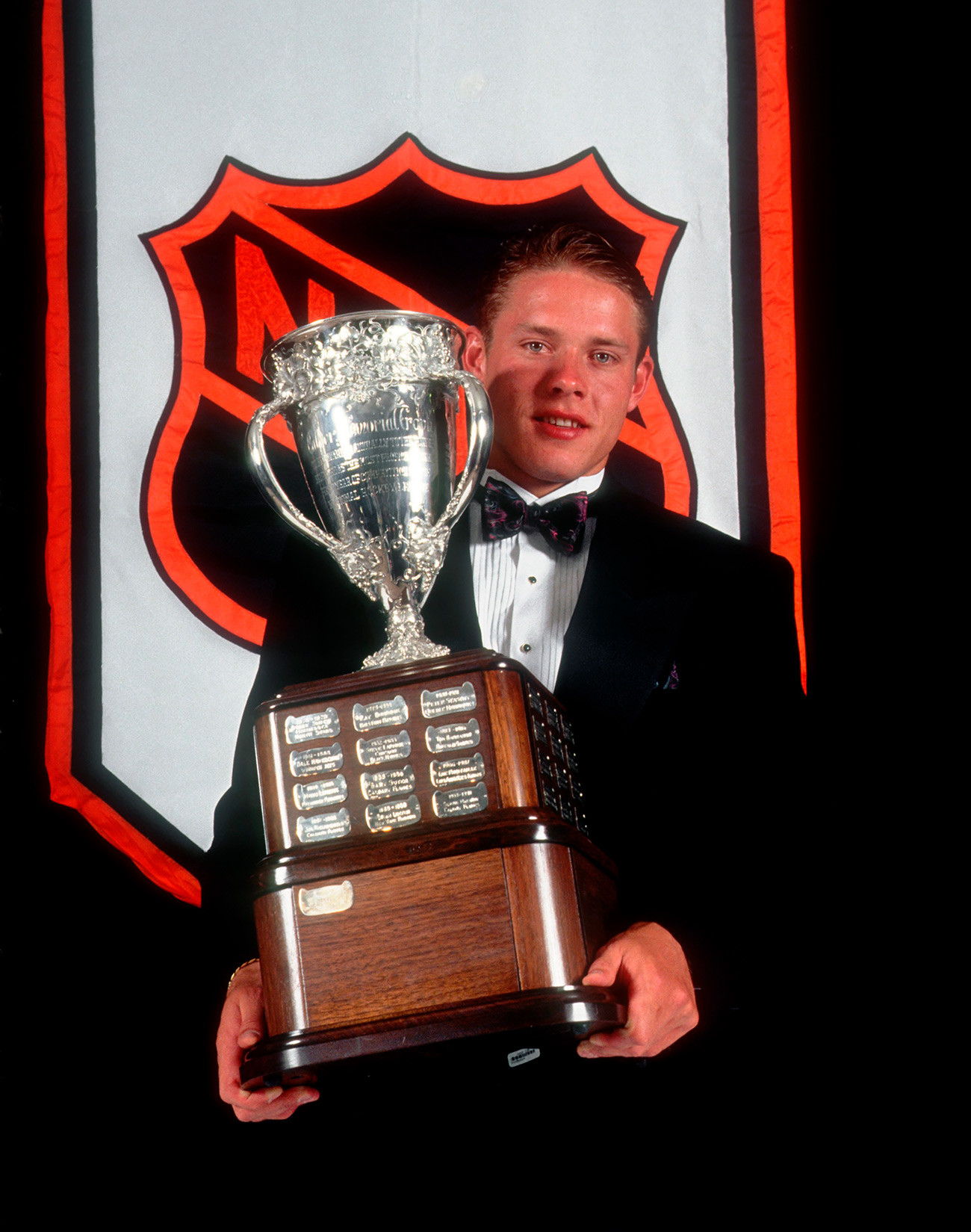 Pavel Bure of the Vancouver Canucks poses after winning the Calder Trophy named for the top rookie of the year.

Due to his recurring injury, Bure regularly missed games, while officially remaining a league player. Only in 2005 did he finally announce the end of his career. The stats speak for themselves: 437 NHL goals. In 2013, the Vancouver Canucks, for the first time in NHL history, retired a jersey (no. 10) in honor of a Russian player. In 2017, Bure was named as one of four Russians in the list of NHL all-time greats. 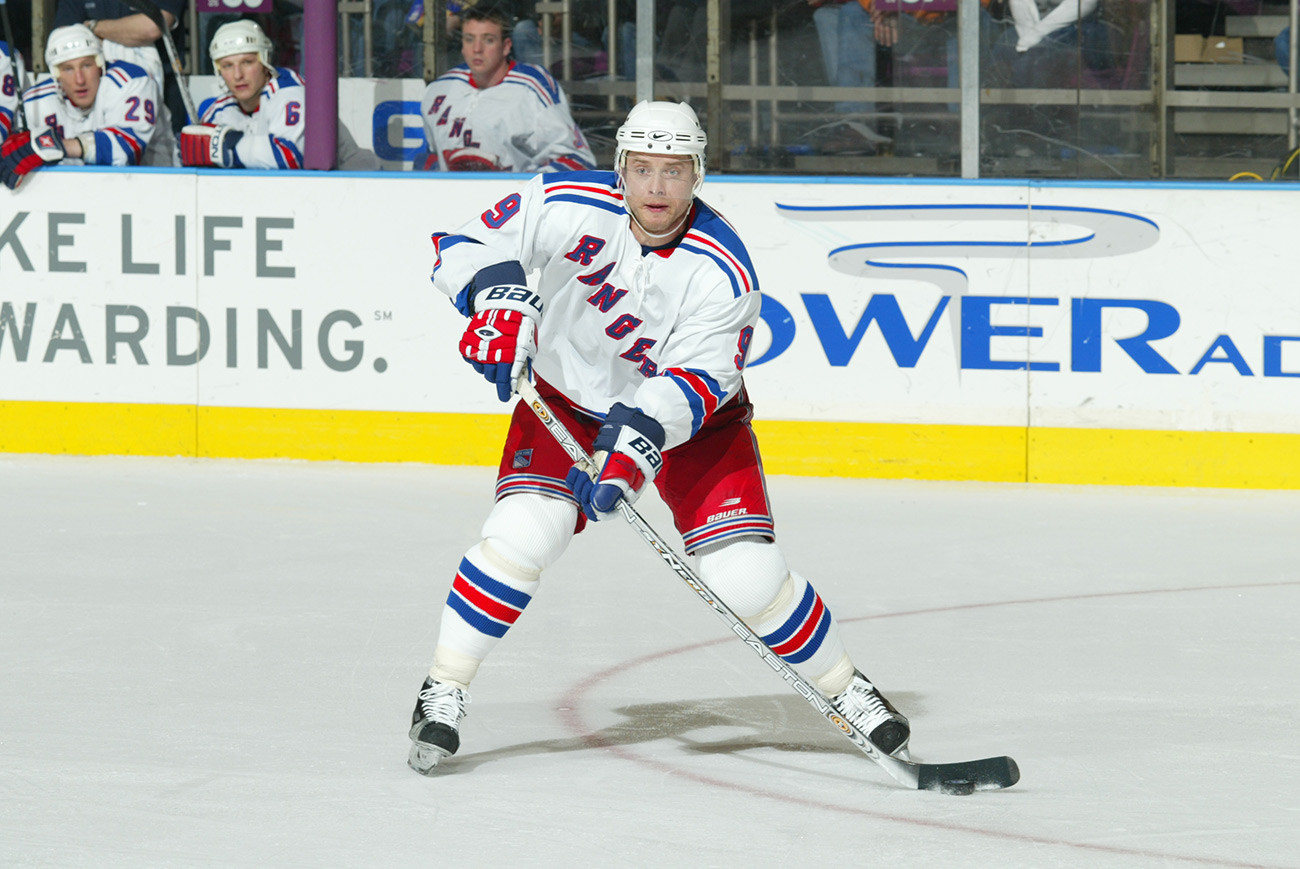 In the early 1990s, NHL-based Russians were still isolated cases, the exception to the rule. That all changed in 1995 when Detroit head coach Scotty Bowman created the “Russian Five” – a unit of Russian players, all legends in their own right.

What would have been impossible to imagine just a decade previously – an entire unit of Russians in one NHL team – became a reality after the Cold War. Bowman was branded a genius for his unprecedented decision to form the Russian Five, and his brainchild duly won the Stanley Cup in 1997. 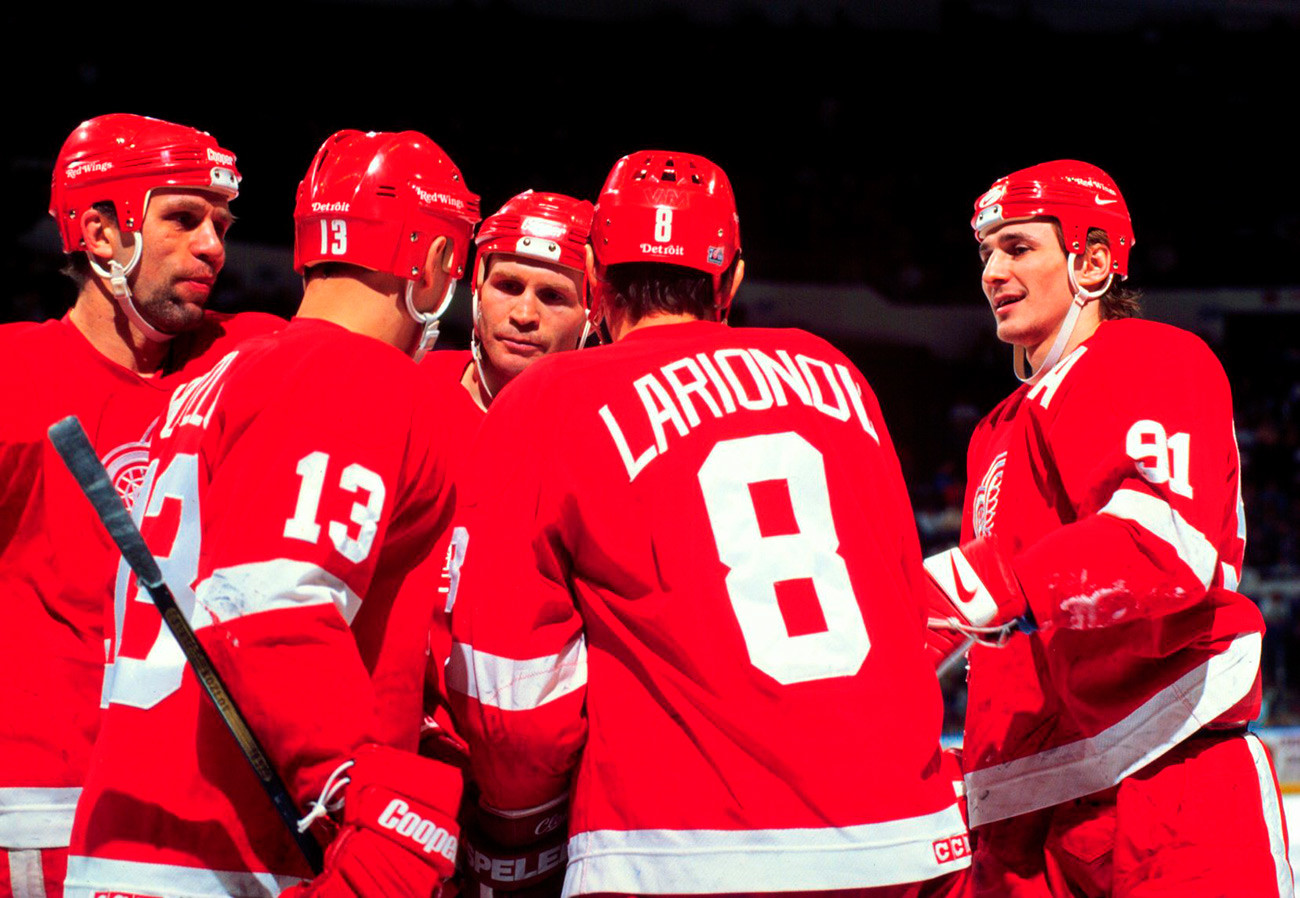 2005 saw the start of a new epoch in NHL history. The league began to take young Russian players who had no experience of the Soviet school. It was the dawn of the Ovechkin era.

On October 5, 2005, world-famous forward Alexander Ovechkin made his NHL debut for the Washington Capitals. Even in his draft year, the 20-year-old Russian was the most sought-after player for many NHL teams, but it was the Washington Capitals who had the first overall pick and drafted the Russian number one.

From the word go, Ovechkin set record after record: best rookie; greatest goal in NHL history (unofficially); biggest contract in NHL history ($124 million for 13 seasons); eight-time winner of the Maurice Richard Trophy as the league’s best forward; the only Russian to break 500 goals in the regular season. 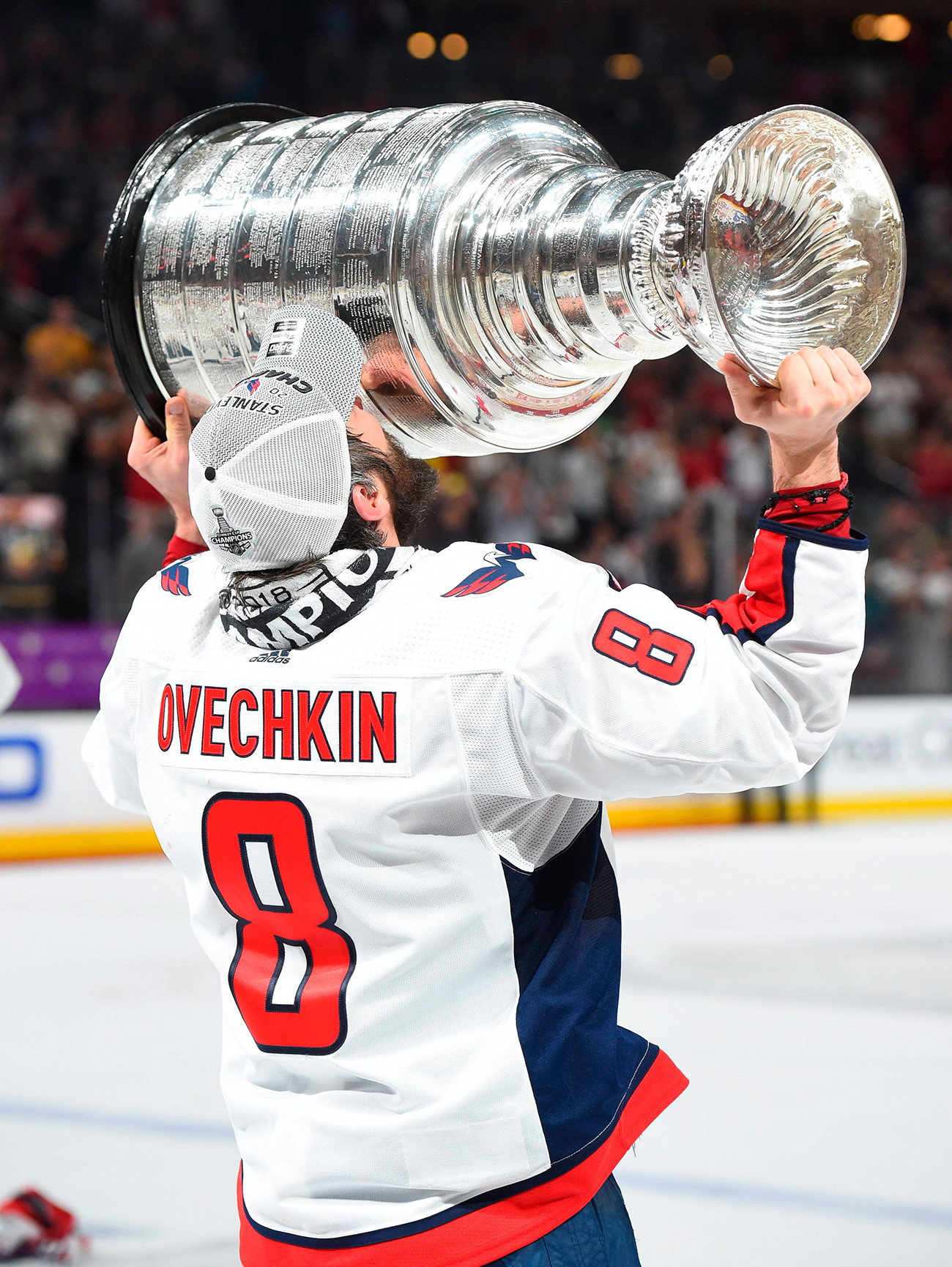 Ovechkin had everything, except the Stanley Cup. Every year saw Ovechkin set new personal records, yet his team could take the cherished title. Only in 2018 did the last piece finally fall into place. On July 7, in a tough contest, the Washington Capitals defeated the Vegas Golden Knights in the season finale. That year, Ovechkin, the Russian captain of an NHL team, finally lifted the Stanley Cup. 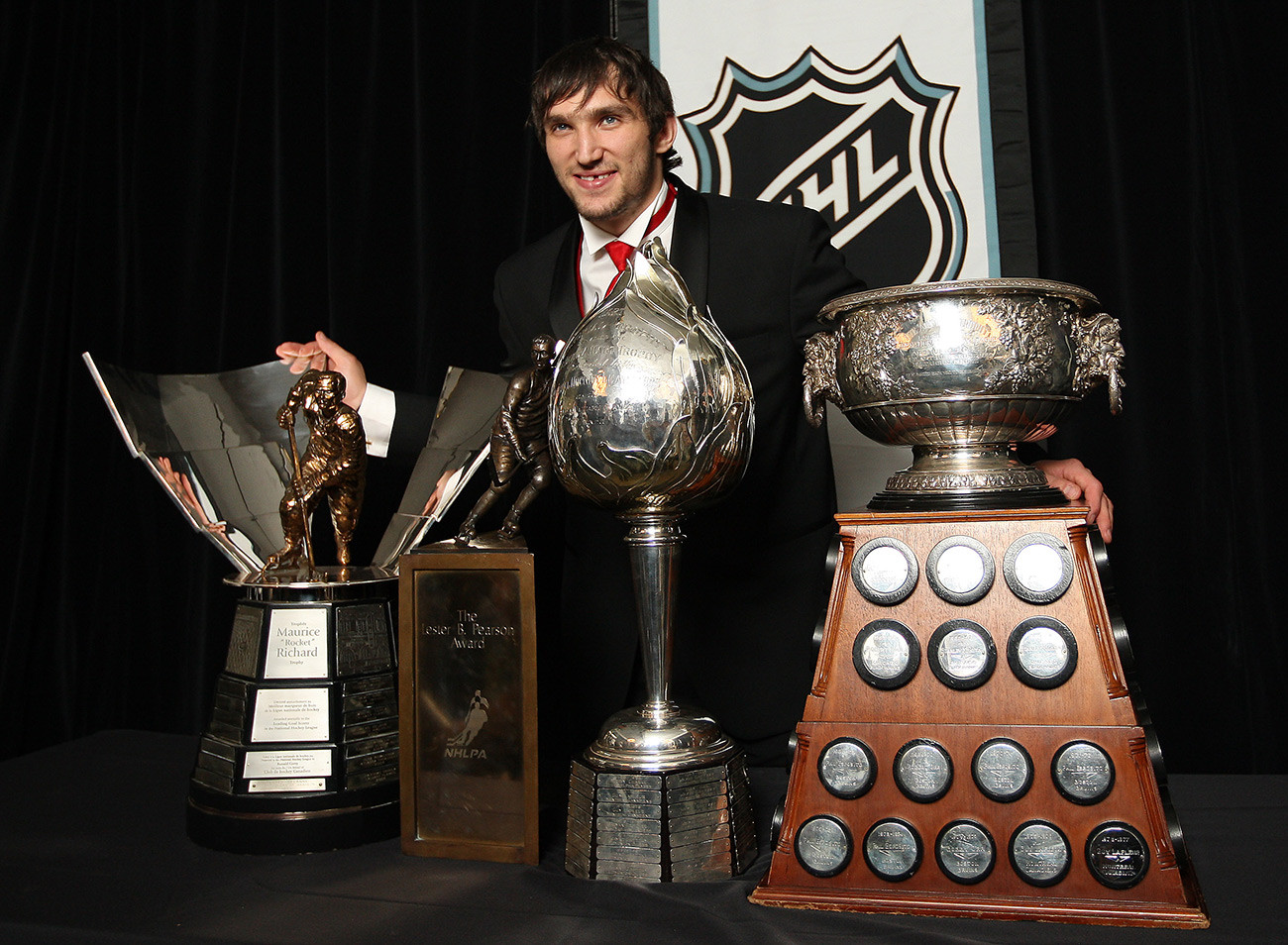 Alex Ovechkin of the Washington Capitals wins the, from left to right, Maurice 'Rocket' Richard Trophy, Lester B. Pearson Award, Hart Memorial Trophy at the 2008 NHL awards at the Elgin Theatre in Toronto.

Throughout its history, a total of 232 Russians have played in the NHL, including eight hall-of-famers and 30 winners of the Stanley Cup, the main prize of the National Hockey League.

Click here to read about the meteoric rise and dramatic decline of Soviet hockey.