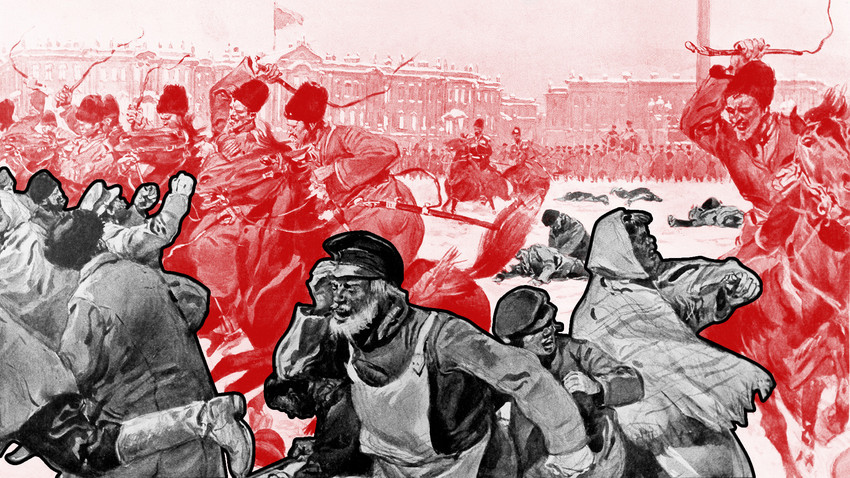 Getty Images
In 1905, workers marched to Nicholas II’s palace with a peaceful petition demanding broader rights. Instead, they were met with gunfire, which completely destroyed Nicholas’s reputation and sent the Russian monarchy hurtling toward its eventual demise.

“I’ll never forget what I saw on January 9, [1905,] from the window of the Academy of Arts’,” Valentin Serov, a popular and talented Russian artist, recalled in his description of the events of what became known as  Bloody Sunday. “A calm, proud and unarmed crowd marching towards gunfire and cavalry attacks was a horrifying sight… Who commanded this massacre? No one will ever wash off that dark patch.” 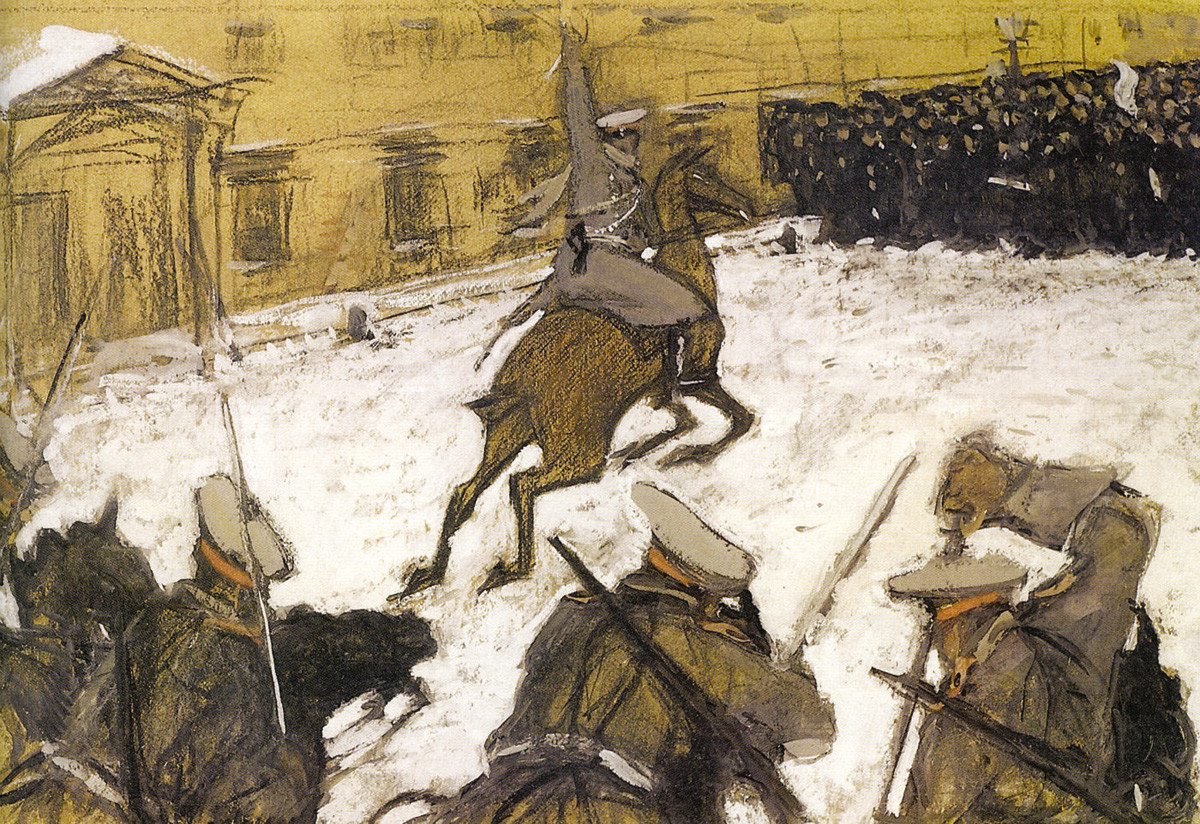 Valentin Serov's painting 'Where is your glory, soldiers?' inspired by the events of the Bloody Sunday.

Multiple other witnesses agreed with Serov: the scene of soldiers firing on a demonstration of workers marching peacefully on the Winter Palace in St. Petersburg (the Emperor’s official residence) was horrifying. How did it come to this?

By 1905, there had been hundreds of thousands of workers in St. Petersburg. Like elsewhere in the country, they lived in tough conditions: 11-hour working days, no vacations and no labor unions. Factory owners had had the right to fire anyone who participated in strikes. 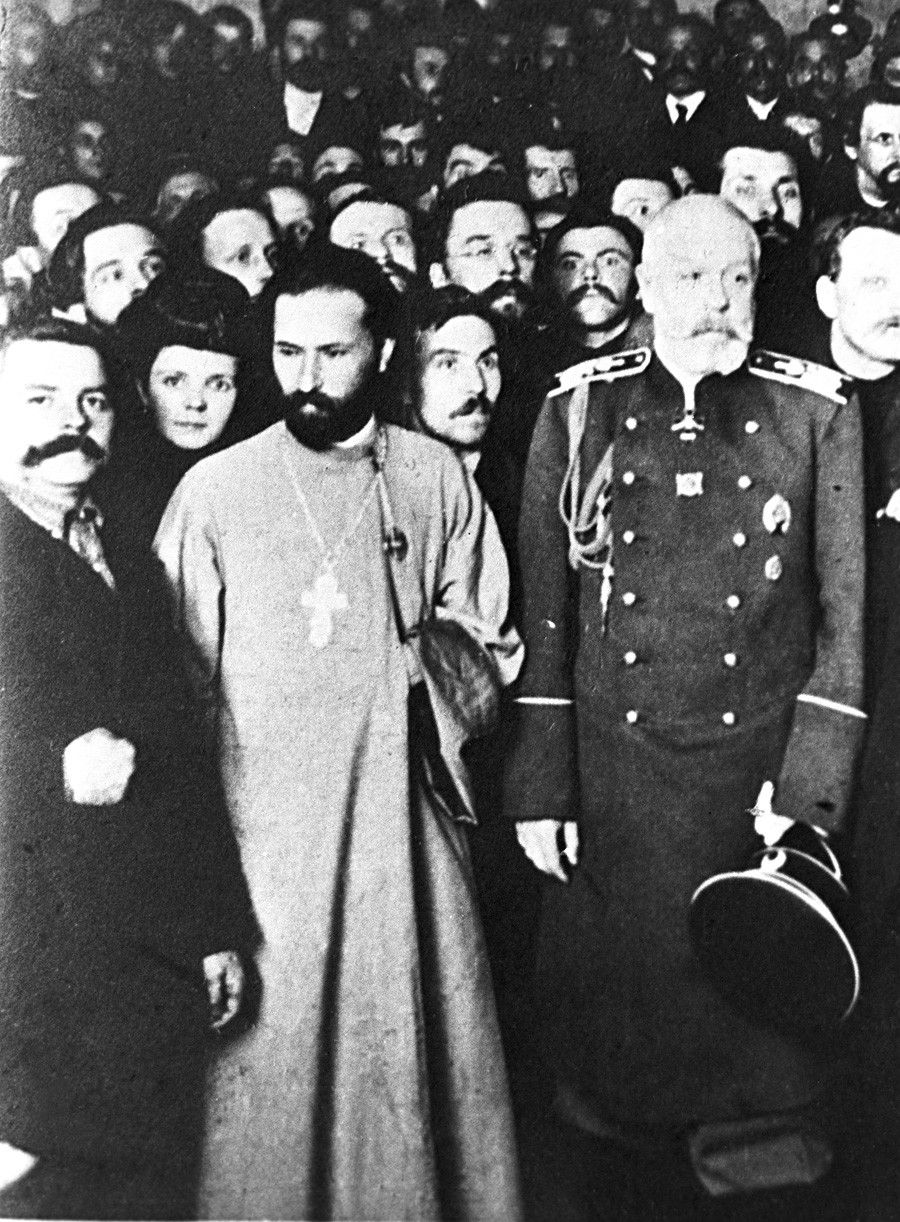 Priest Georgy Gapon and St. Petersburg City Governor Ivan Fullon at a meeting of the Russian Assembly of Factory and Plant workers.

Amid these conditions, the workers’ movement for broader labor rights had indeed existed – however, it had to be loyal to the government, and was rather docile. The Assembly of Russian Factory and Mill Workers of St. Petersburg was founded in 1903, and included around 10,000 workers. Its leader, popular priest Georgy Gapon, championed workers’ rights, but wasn’t a revolutionary – on the contrary, he cooperated closely with the authorities, trying to act within the legal framework. The Assembly worked to raise workers’ cultural awareness, as well as helping the needy and other related activities. “The government looked at us condescendingly; its officials were donating some money to our libraries, papers, magazines…” recalled Nikolai Varnashov, Gapon’s associate in the Assembly. 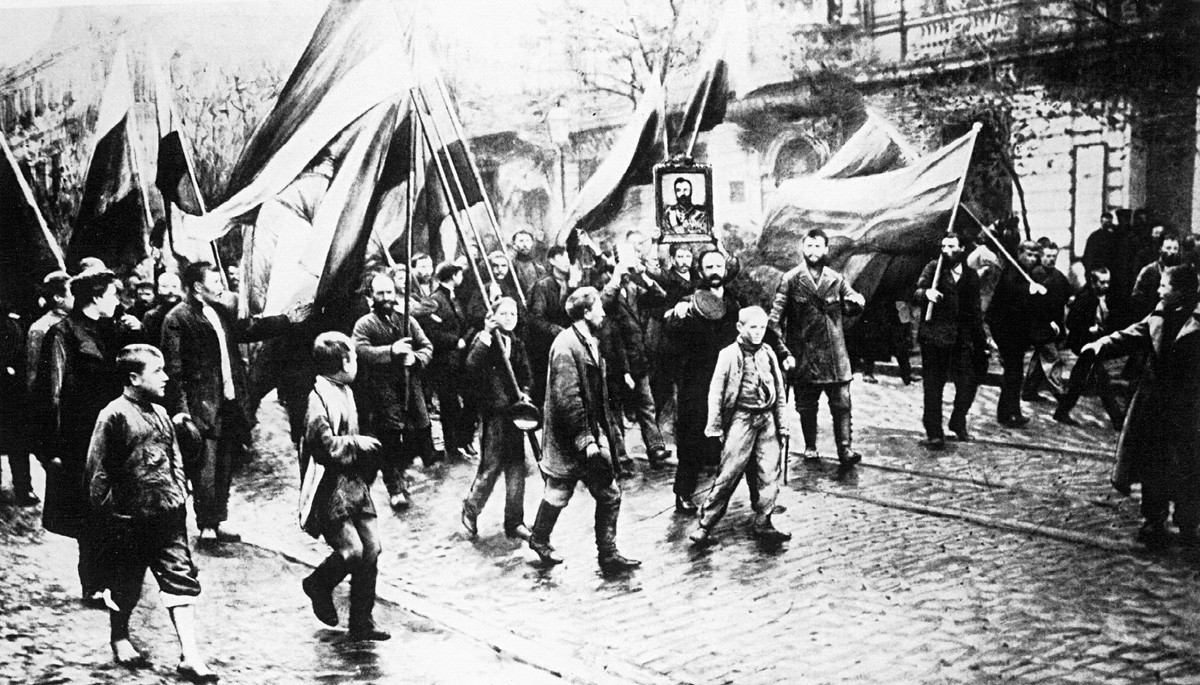 The situation was gradually changing in 1904, as Russia was losing the Russo-Japanese War. Slowly but surely, the idea of the Tsar’s government being ineffective had taken root among the public. Different local councils, known as zemstva, were signing petitions asking for a more democratic form of governance – with an elected legislature and broader civil rights.

Gapon also started popularizing the notion of necessary reforms among his people. It was a risky business – most workers remained loyal to the Tsar but, day by day, their resentment was growing.

“We were leading workers’ thoughts in two directions,” Varnashov wrote. “First – we can’t live like this anymore, the Tsar needs to be helped with popular representations because now he is cheated by corrupt ministers. Second – workers also must join the chorus of all of Russia’s classes.” The Assembly still rejected the revolutionary ideas (at least officially) but the tensions were mounting. 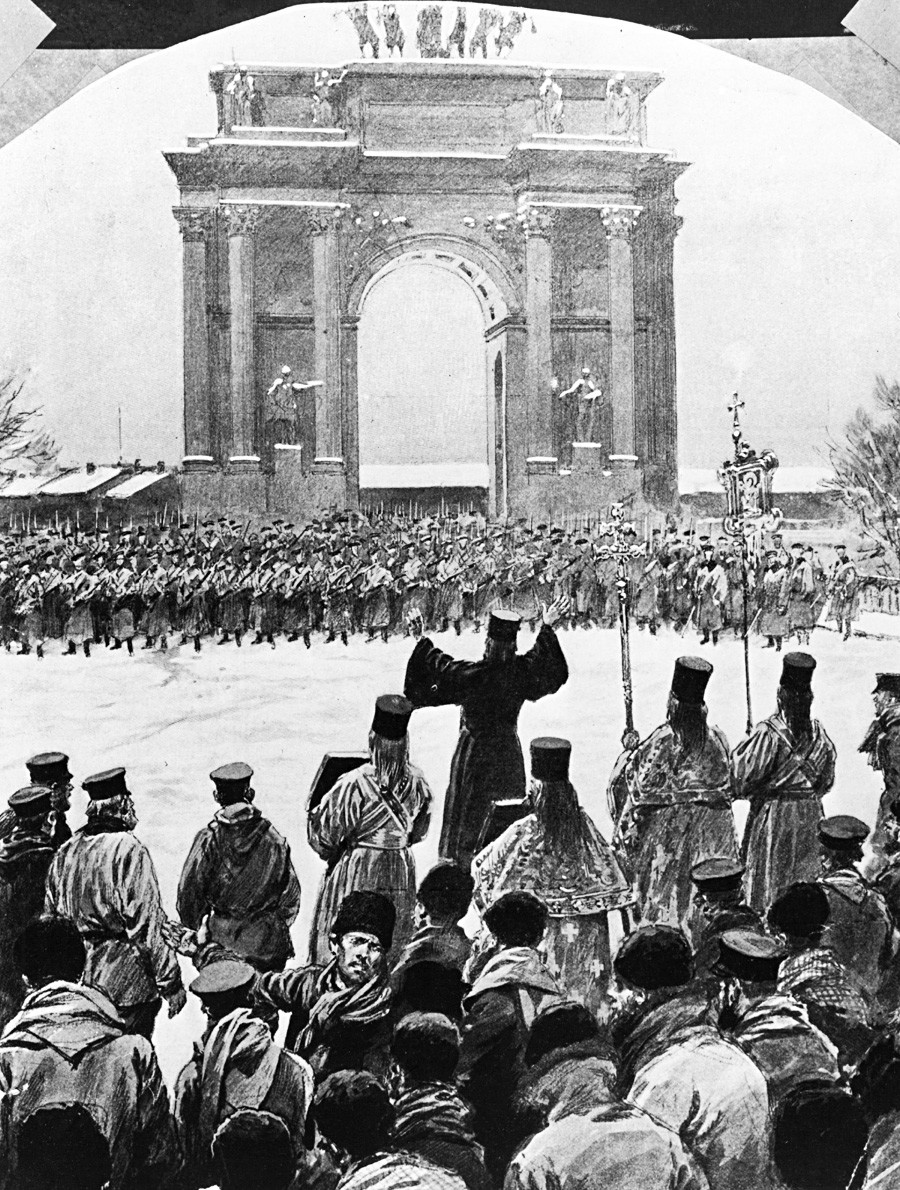 The situation was so tense, even a minor incident could lead to serious consequences – that incident occurred in late December, 1904, when four workers, members of the Assembly, were fired from the Putilov Ironworks in St. Petersburg – a later investigation showed that their boss, a member of a conservative organization, had been motivated by political reasons.

The Assembly took it as a direct challenge. “If we turn our backs on the fired, no one will ever trust our union anymore, let alone that this will only encourage despotism,” Gapon wrote in his memoirs. After attempts to get their jobs back through negotiations failed, Gapon and the Assembly called for a mass strike – not only at the Putilov Ironworks, but all around the capital.

The workers supported their colleagues – as impoverished and deprived of rights as they were. Rallies roiled the city. By January 8, around 100,000 workers from different factories were on strike. That was when Gapon decided to address Tsar Nicholas with a petition on behalf of the working class. 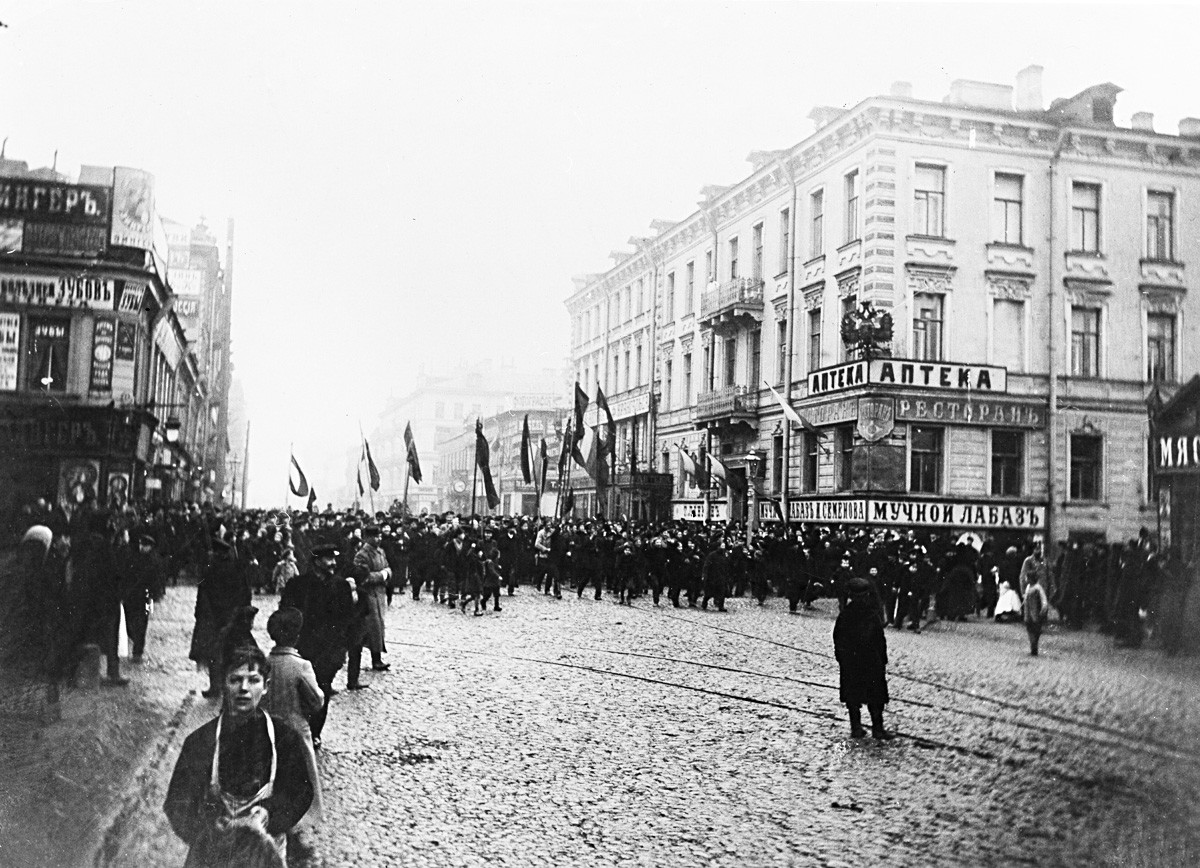 There was nothing revolutionary in the document – it didn’t call for the abdication of the Tsar or somehow threaten the regime. The petition concentrated on demands such as an eight-hour working day, freedom of association and “a normal working wage”.

Nevertheless, it also contained some political demands, which Nicholas II, a devoted autocrat, surely wasn’t ready to embrace, such as “freedom and inviolability of the person, liberty of speech, of the press, of association, of conscience in matters of religion, and separation of Church and State”, “equality of all persons” and “gradual transfer of the land to the people”.

The text of the petition, however, ended on a more or less loyal note: “Those, Sire, constitute our principal needs... Give orders and swear that they shall be fulfilled, and you will render Russia happy and glorious… But if you withhold the word, if you are not responsive to our petition, we will die here on this square before your palace.” As it turned out, some of them had to. 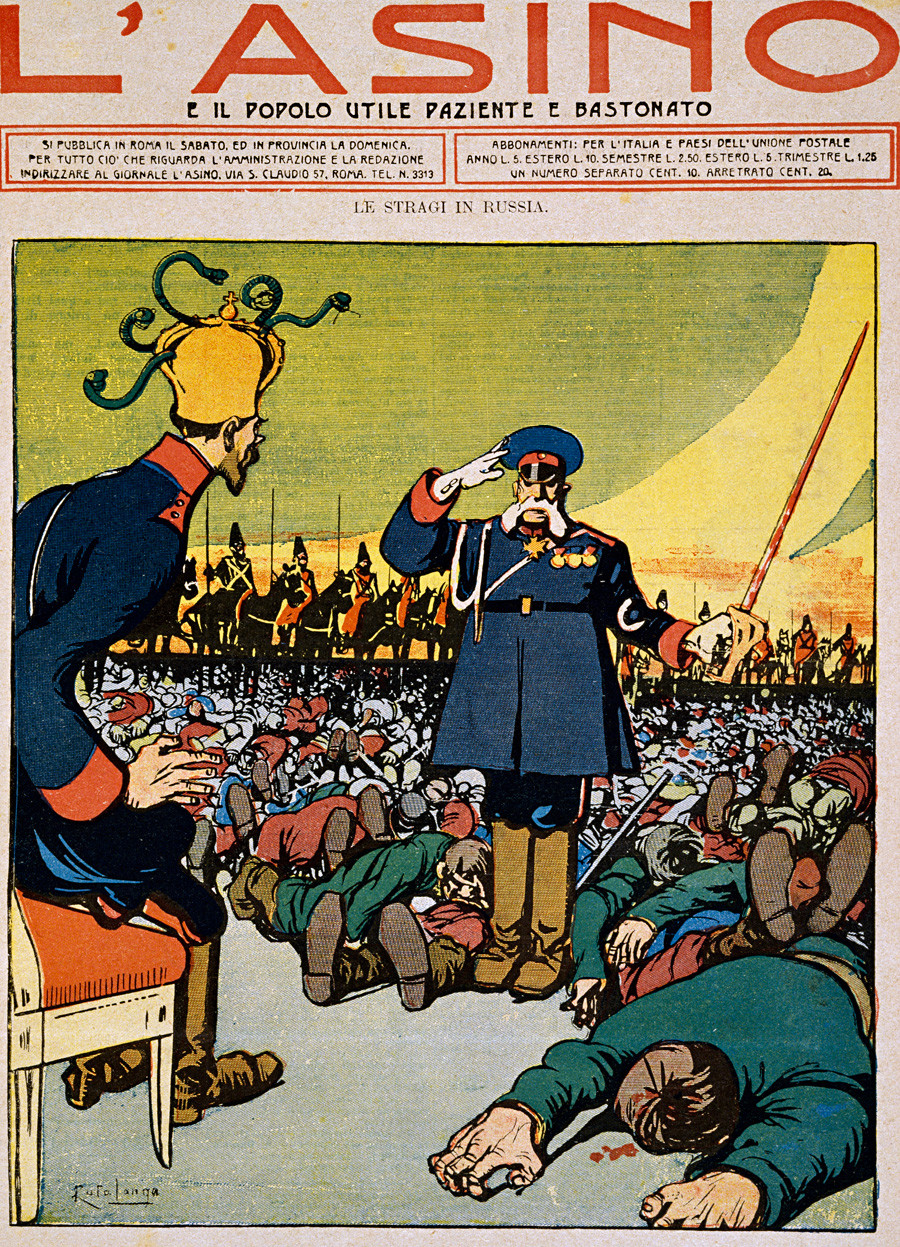 The massacres in Russia, satirical cartoon dedicated to Bloody Sunday in St Petersburg.

As the march of thousands of workers from their factories started on January 9, Nicholas II wasn’t in the capital – he had left for his Tsarskoye Selo residence two days prior, as there were rumors about revolutionaries (not Gapon-related) plotting an attempt on his life. Workers’ leaders knew this, but they weren’t planning on meeting the Tsar in person: it would have been enough if the officials had accepted their petition and given it to Nicholas.

But the powers-that-be opted for a different strategy. “It was decided not to allow workers near the Winter Palace, and use force in case they didn’t obey,” recalled Alexander Spiridovich, a police general who was aware of the meeting in the office of the Interior Minister. The officials were too scared of provocations to let the crowd anywhere near the palace. “Concentrated on the dozens of real revolutionaries, the authorities overlooked dozens of thousands of loyal workers!”, Spiridovich wrote angrily. 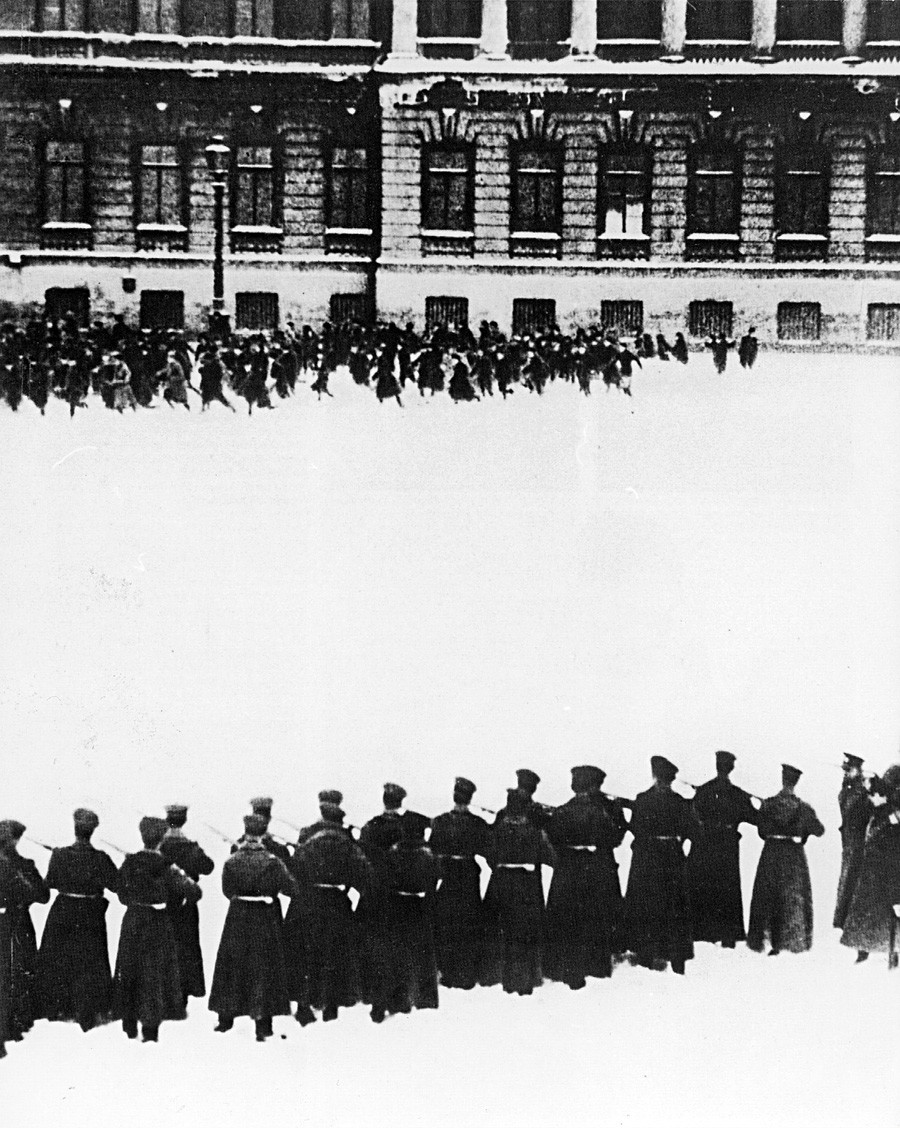 January 9, 1905, became the 'Bloody Sunday' of St. Petersburg, when a peaceful demonstration, which was bringing a petition to the Czar, was shot at by guard troops and police.

As it turned out the tragedy was almost inevitable around 30,000 soldiers had arrived to St. Petersburg to prevent the workers from reaching the Winter Palace. Despite that, tens of thousands marched holding Nicholas II’s portraits and icons, singing patriotic songs, eager to make their case to the Tsar. They wholeheartedly believed that the army wouldn’t fire on their compatriots.

They were wrong: as demonstrations carried on, soldiers opened fire on unarmed crowds all over the city. Cossacks were attacking the demonstrators on their horses, beating them with whips and swords. Georgy Gapon, who led one of the marching columns, barely escaped death and had to go into hiding. At least 130 people died that day, according to official statistics, – though the papers reported up to 4600 dead (which was unlikely). 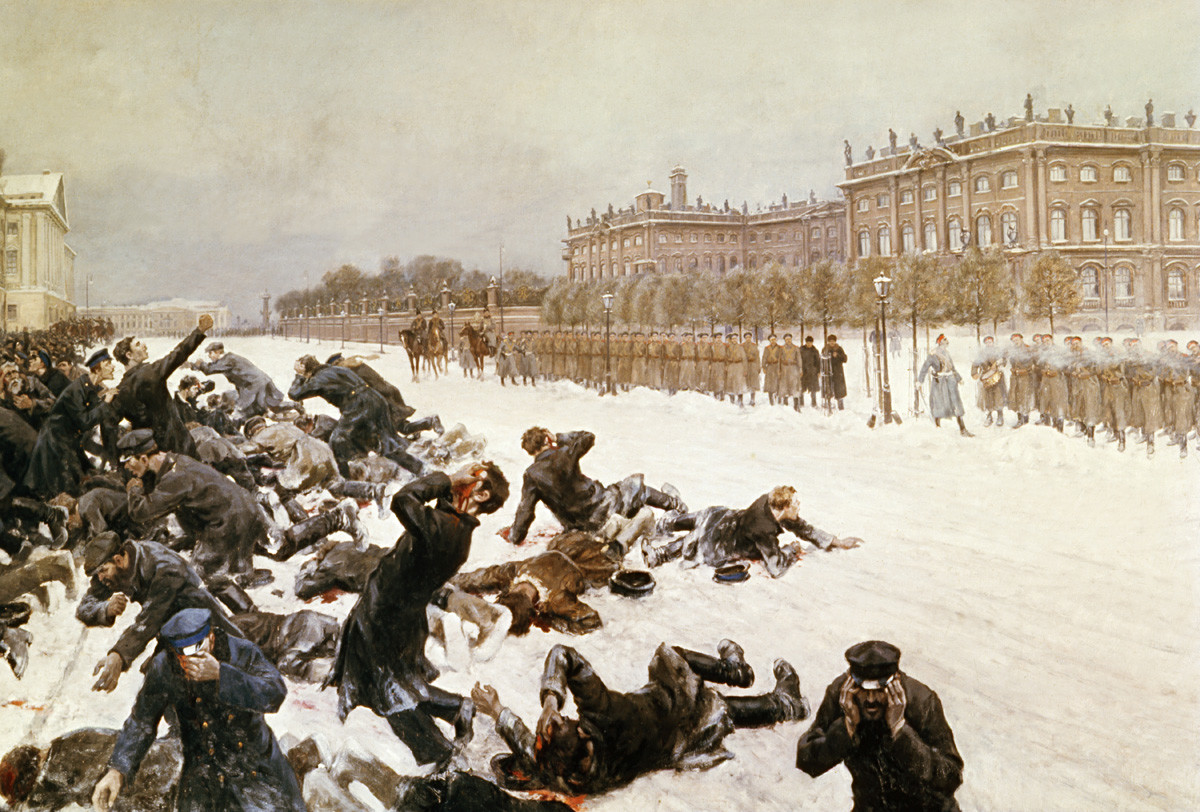 What was crucial about the Bloody Sunday of January 9 was that it shocked the public and changed its attitude towards Nicholas II and his regime. From then on, the nickname “Nicholas the Bloody” had begun to follow the monarch.

“So it happened. The Tsar is well alive, but may he rest in peace,” wrote Nikolai Varnashov after the Bloody Sunday. “Today, he shot himself.” And though it was 13 years before Nicholas actually was shot, the Bloody Sunday was one of the major tipping points - a beginning of a very inglorious end for the Russian monarchy.