This iconic WWII photo was staged 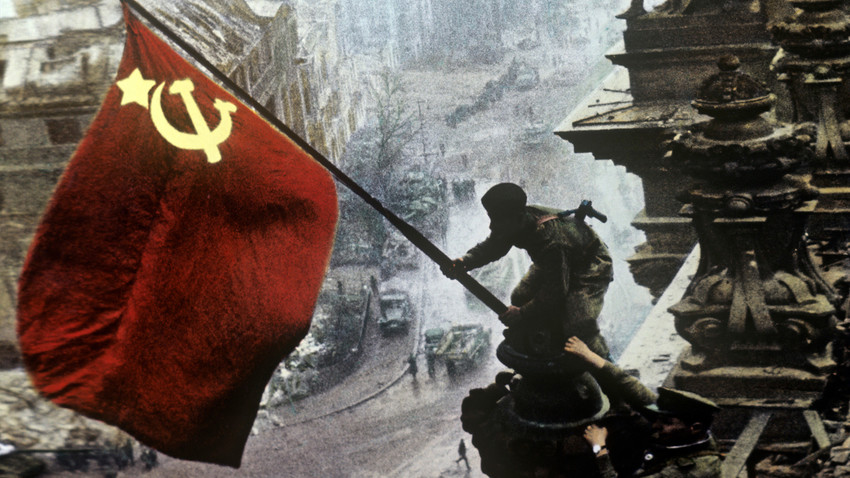 Yevgeny Khaldey/Sputnik
There were several Victory Banners, but where is the actual one?

Amazingly, that iconic photo of the Victory Banner flying over the Reichstag isn’t a photo of the actual banner. It was taken later as a propaganda shot. Now, to the real story.

They didn’t hide their tears 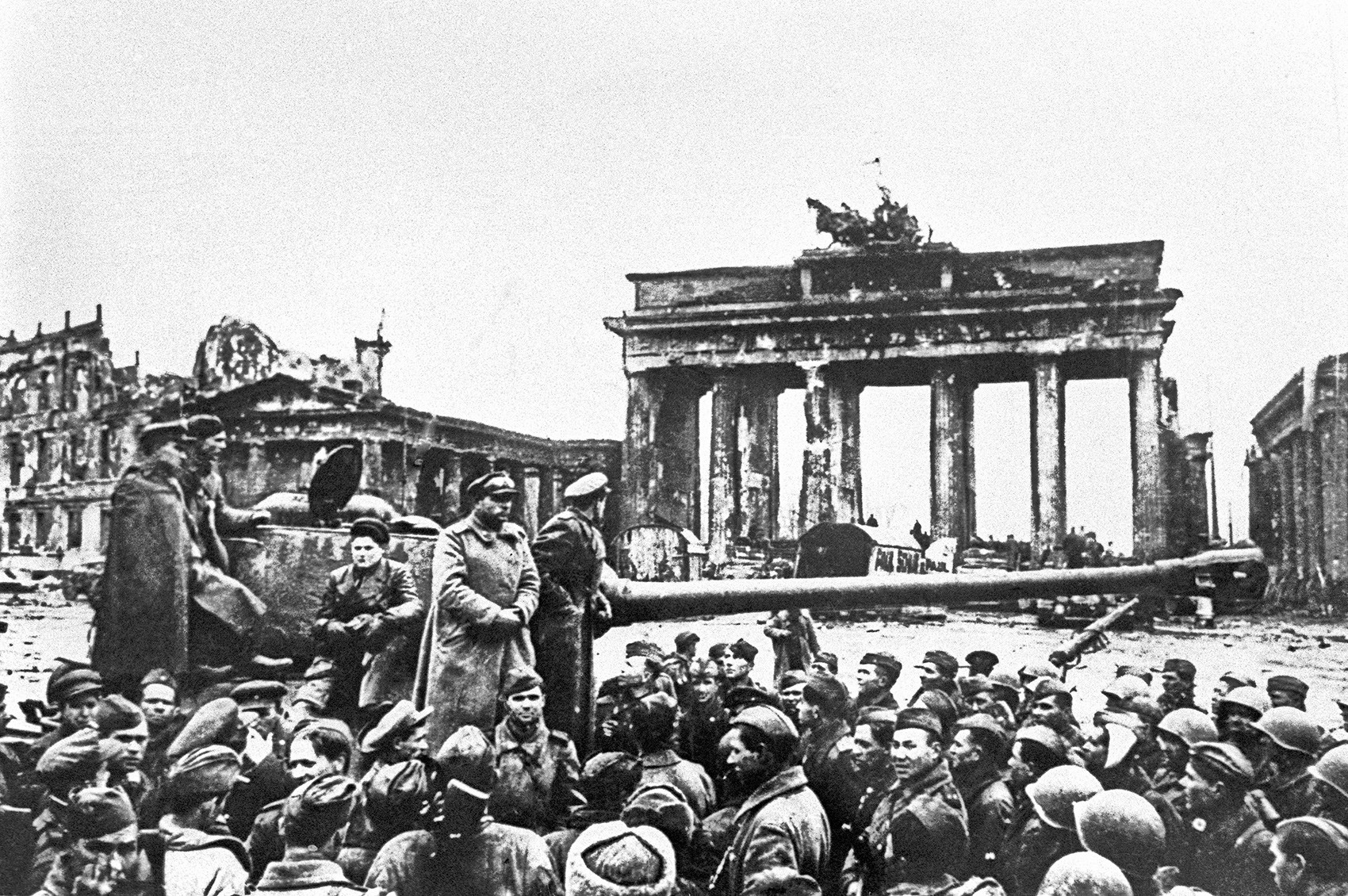 Rare photo of Soviet troops in Berlin, May 1945.

World War II was drawing to its obvious end when in April 1945, when the Red Army closed in on Berlin. The 3rd Shock Army division of the 1st Belorussian Front was the first to reach the Reichstag building, where the last Nazi forces were surrounded and defending their last post fiercely.

Head of the political department of the 3rd Shock Army, Fyodor Lisitsyn, recalled:

“I suggested making 9 red banners [to hoist over the Reichstag building], each one for each of the shooting divisions of our army. The military council approved the decision. We decided to drop the luxury: make them from simple scarlet canvas, strictly sticking to the form and size of the Soviet State flag. Women took scissors, thread, and needle, they sewed and cut. They didn’t hide the tears. At that very moment, many of us understood how close the end of this inhuman war was…”

It was decided that the first division to reach Reichstag shall hoist its banner over it. This was done following a direct order from Joseph Stalin, who said in October 1944: “Now, there’s a final, concluding mission standing before the Red Army: together with our allies’ armies, finalize the debacle of the Fascist German army, finish off the Fascist beast inside its own lair and hoist the Victory Banner over Berlin.”

Soon after these words were spoken, a velvet crimson banner was made at a factory in Moscow, with a coat of arms of the USSR and the inscription “Our cause is just, victory is ours!” in Russian. But this luxurious banner didn’t make it to the front lines, and why – it’s still unknown. 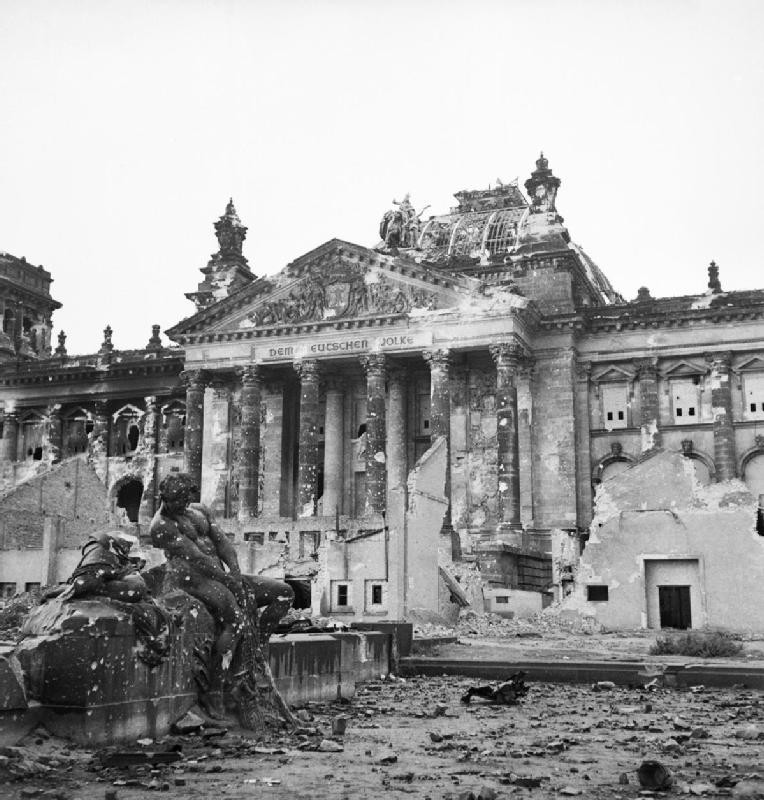 The Reichstag after its capture by the Soviet troops, June 1945

On April 30, the Soviet army started its onslaught on the Reichstag. The building, defended by about 5,000 Nazi soldiers and officers, and several batteries of heavy artillery, proved very hard to capture.

During that day, Soviet radio had broadcasted a message that the Victory Banner had been hoisted over the Reichstag; however, it was a false report from a probably overly enthusiastic officer in the 3rd Shock Army command – one of the banners had only been tied to a column of the Reichstag’s portico – lieutenant Koshkarbaev and private Bulatov had crawled on their bellies to do this. As parts of 150th and 171st shooting divisions progressed their onslaught inside the building, they left red banners – big and small, to mark their control over the areas of the Reichstag.

Only in the evening, after a third onslaught, was most of the Reichstag building under Soviet control. At 10:40 PM, a group of Soviet soldiers, unnoticed by the Germans who still controlled the upper floors, sneaked onto the roof of the portico and placed a Red Banner inside the crown of the Statue of Victory. However, this one didn’t become the Victory Banner, because it was not over the building, but over the portico... There were at least three more banners hoisted over the building that night, however, all of them destroyed by German artillery fire. The Nazis continued to defend the building from inside and outside.

Dancing against the Reichstag’s dome 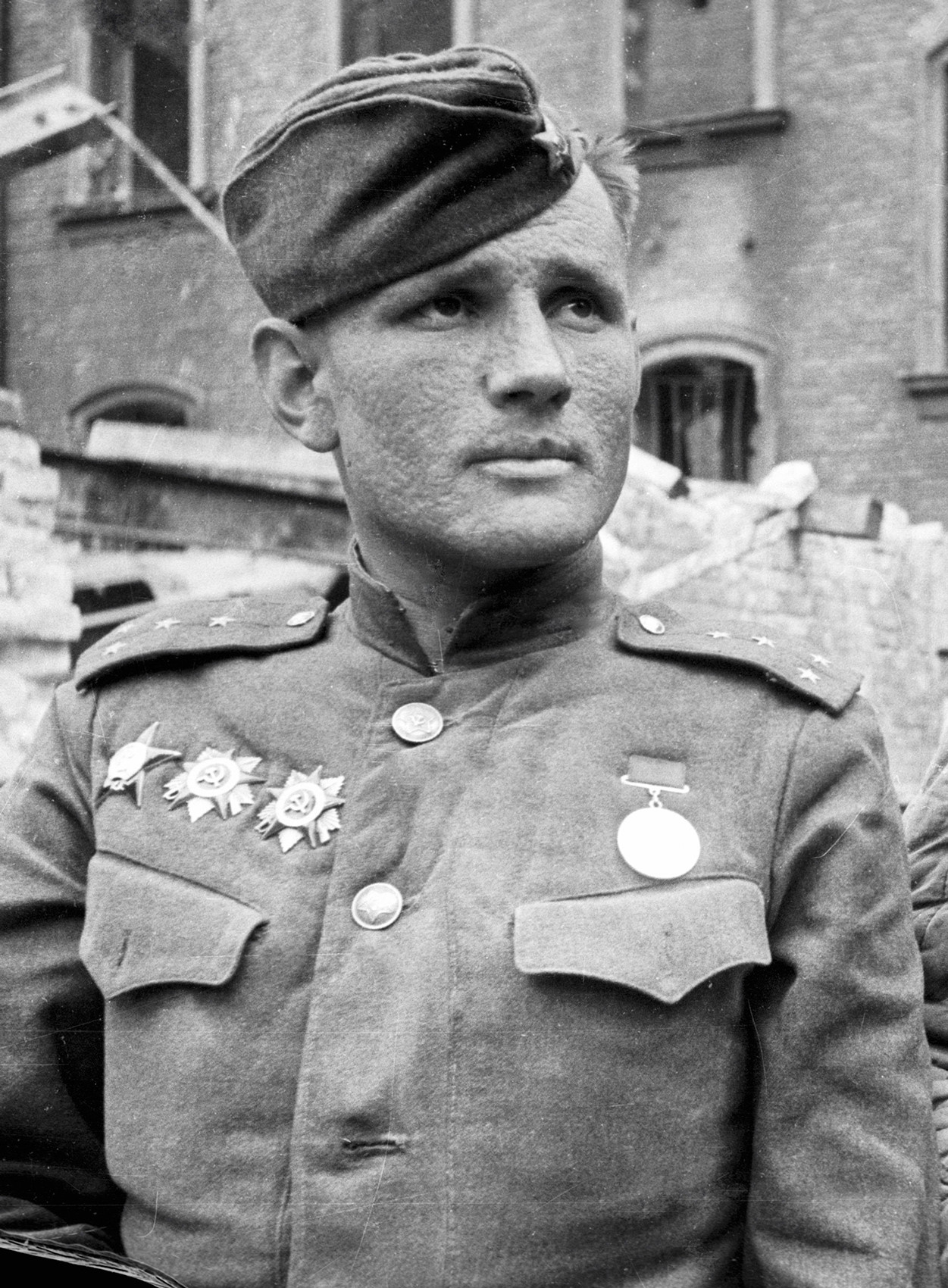 Stepan Neustroev (1922-1998), Soviet officer, commander of the 1st Battalion in the 756th Regiment of the 150th Rifle Division. His unit stormed the Reichstag.

Only one banner survived, the one installed in the first hours of May 1 by lieutenant Alexey Berest, sergeant Mikhail Yegorov, and sergeant junior Meliton Kantaria on the eastern part of the roof. In the morning of May 2, while the building was still partly controlled by the Germans, Yegorov, Kantaria, and colonel Fyodor Zinchenko went up again to hoist the banner even higher.

Head of the 1st battalion of the 150th division, captain Stepan Neustroev, was the superior of Berest, Kantaria, and Yegorov, and in charge of the hoisting. He recalled in his memoirs:

“More than an hour passed. We thought: that’s it, nobody will come back alive. And suddenly, we saw: against the glass dome of the Reichstag, the three of them were ‘dancing’, and obviously, not for joy. It’s just that you have fewer chances to get hit by a bullet if you’re moving.” 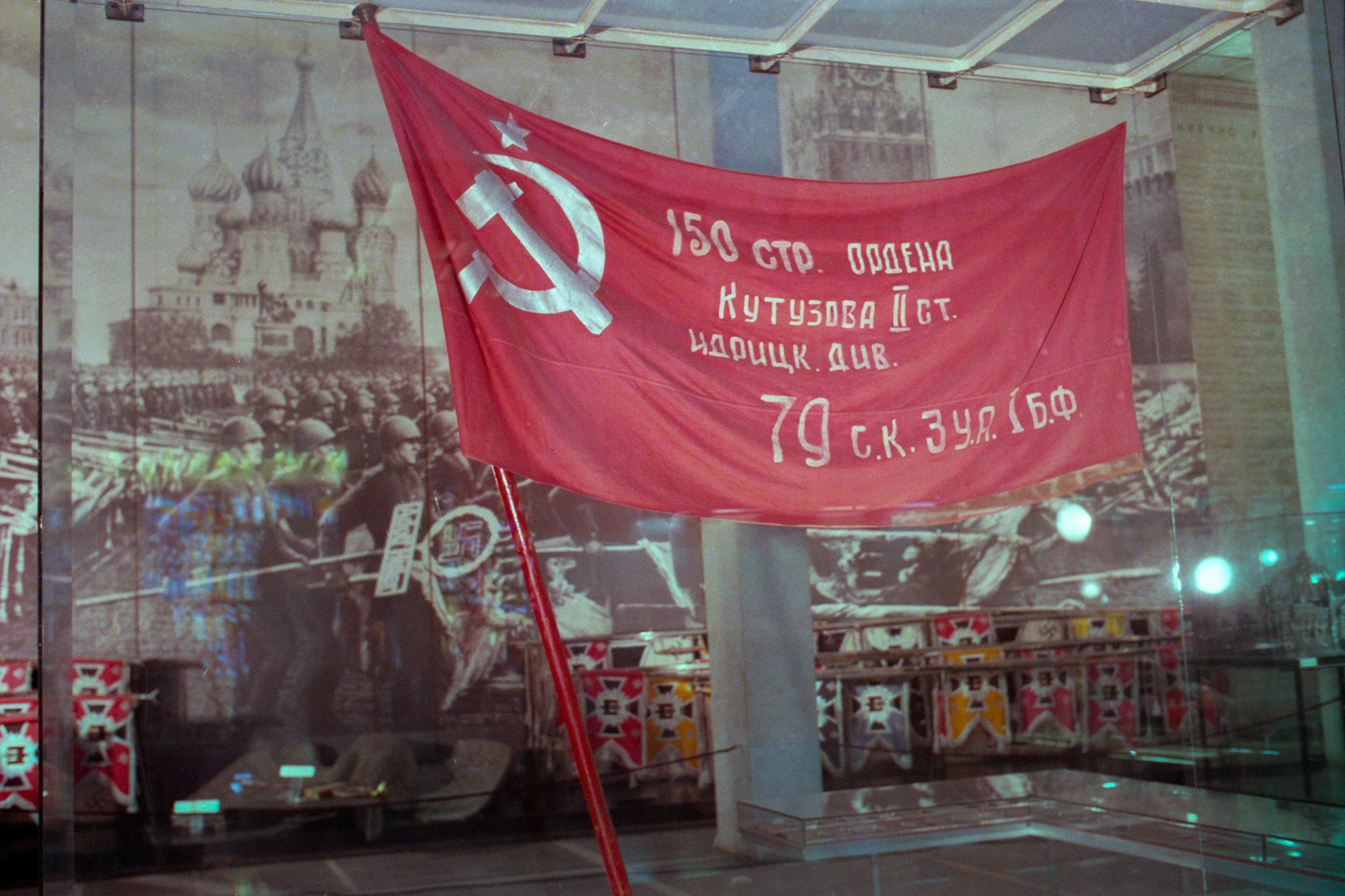 The Victory Banner (copy) in the museum

Several days later, the Victory Banner was taken down in preparation to be transported to Moscow. While it was in the army headquarters, officers painted on it: “9 shooting battalion of the 150th division of the 3rd Shock Army of the 1st Belorussian front” to immortalize themselves. 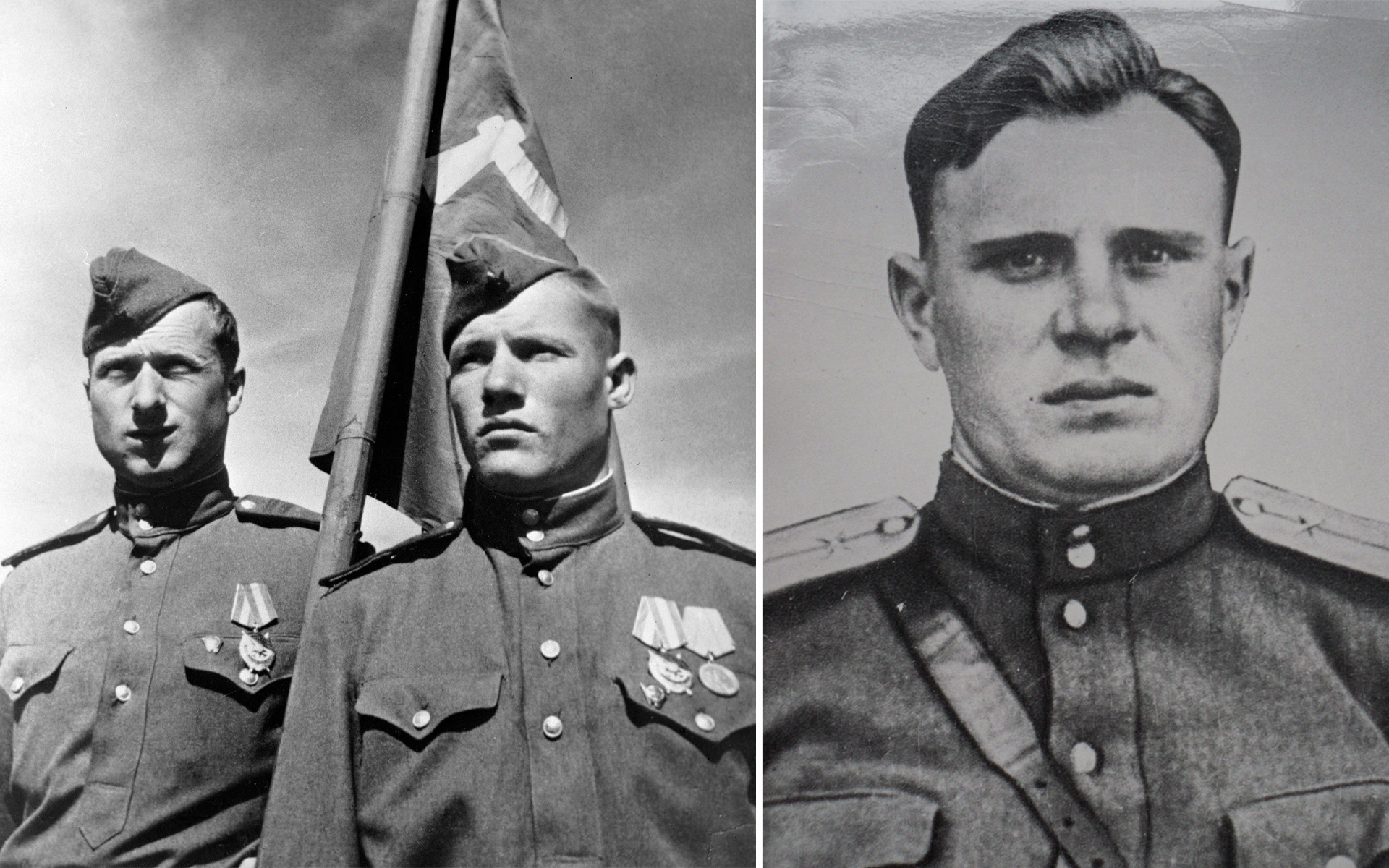 However, the actual banner wasn’t shown at the Victory Parade, June 24, 1945. Stepan Neustroev, who was to carry the banner, had 5 wartime wounds and could barely walk, and his soldiers couldn’t march properly – during real wartime, they didn’t have time for drills. The Victory Banner was first shown at the Victory’s 20th anniversary, May 9, 1965. It was carried by Mikhail Yegorov, Meliton Kantaria, and colonel Konstantin Samsonov.

The actual banner is now preserved in special conditions in the basement of the Central Armed Forces Museum in Moscow. On display in a glass case is the banner’s exact copy.

Why isn’t the photo authentic?

The retouched (L) and the original (R) photos.

There were no photos or newsreels of the hoisting of the Victory Banner. After Berlin was taken, Soviet military photo correspondent Evgeny Khaldey asked Alexey Kovalev, Abdulkhakim Ismailov, and Leonid Gorichev, soldiers from the 8th Guards Army (who didn’t take part in the actual siege of the Reichstag nor hoisted any banners during it) to pose for a photo. As we can clearly see, the flag they are hoisting is not the Victory Banner (this pictured flag was brought by Evgeny Khaldey), and it is not being placed on the Reichstag’s dome. However, this very photo came to depict the historical moment. 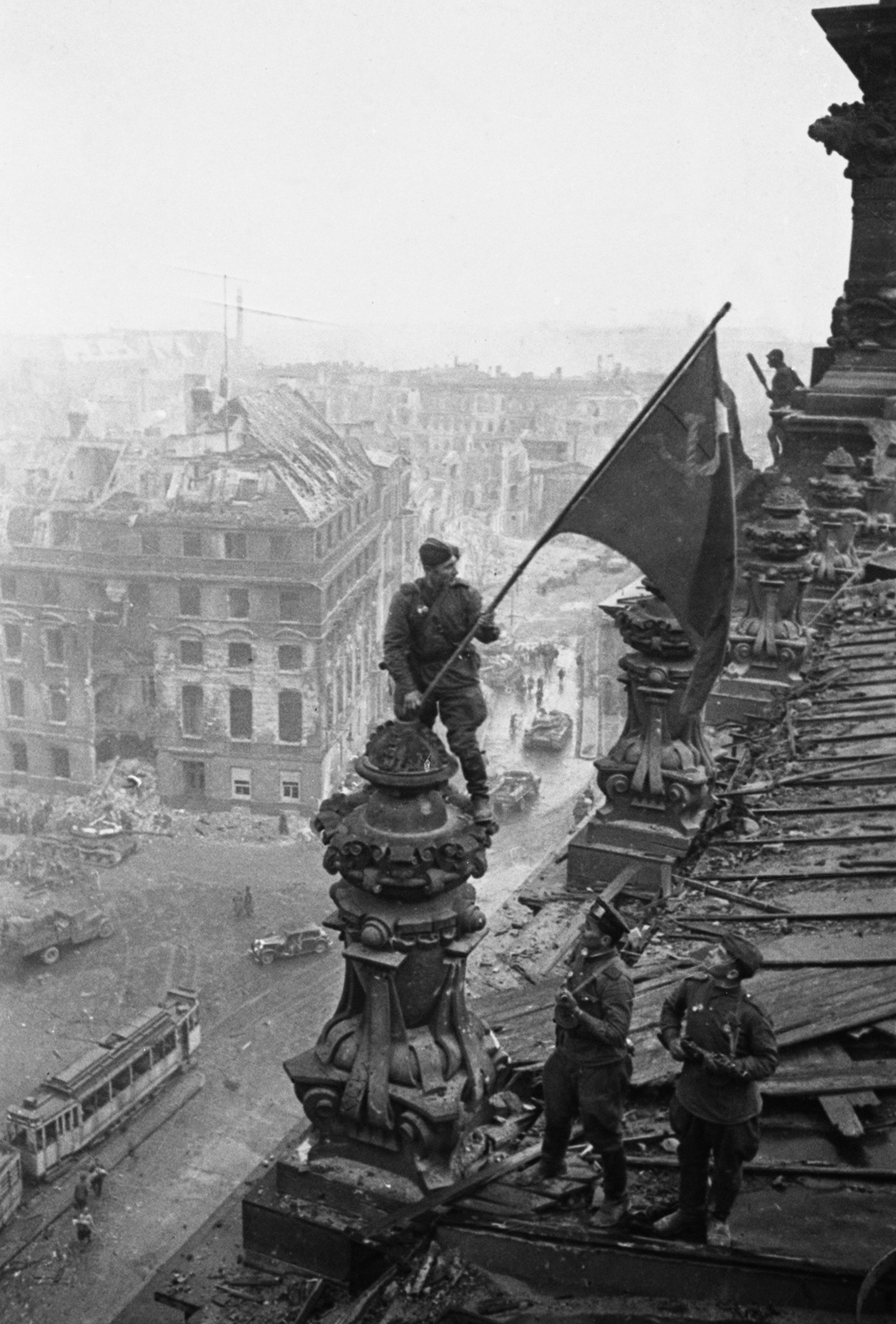 A photo from the same photoshoot.

The photo was retouched before publication in the Soviet newspapers. The banner was reddened even more, and stormy clouds added in the background. Also, Abdulkhakim Ismailov (who is seen holding Alexey Kovalev, the one who hoists the banner) had watches on his both hands – Soviet journalists understood that it could lead to suspicions of Soviet soldiers looting. So the second watch was removed from the print before the publication. The original unretouched photo surfaced only in 2013 and is now in the Jewish Museum and Tolerance Center in Moscow. 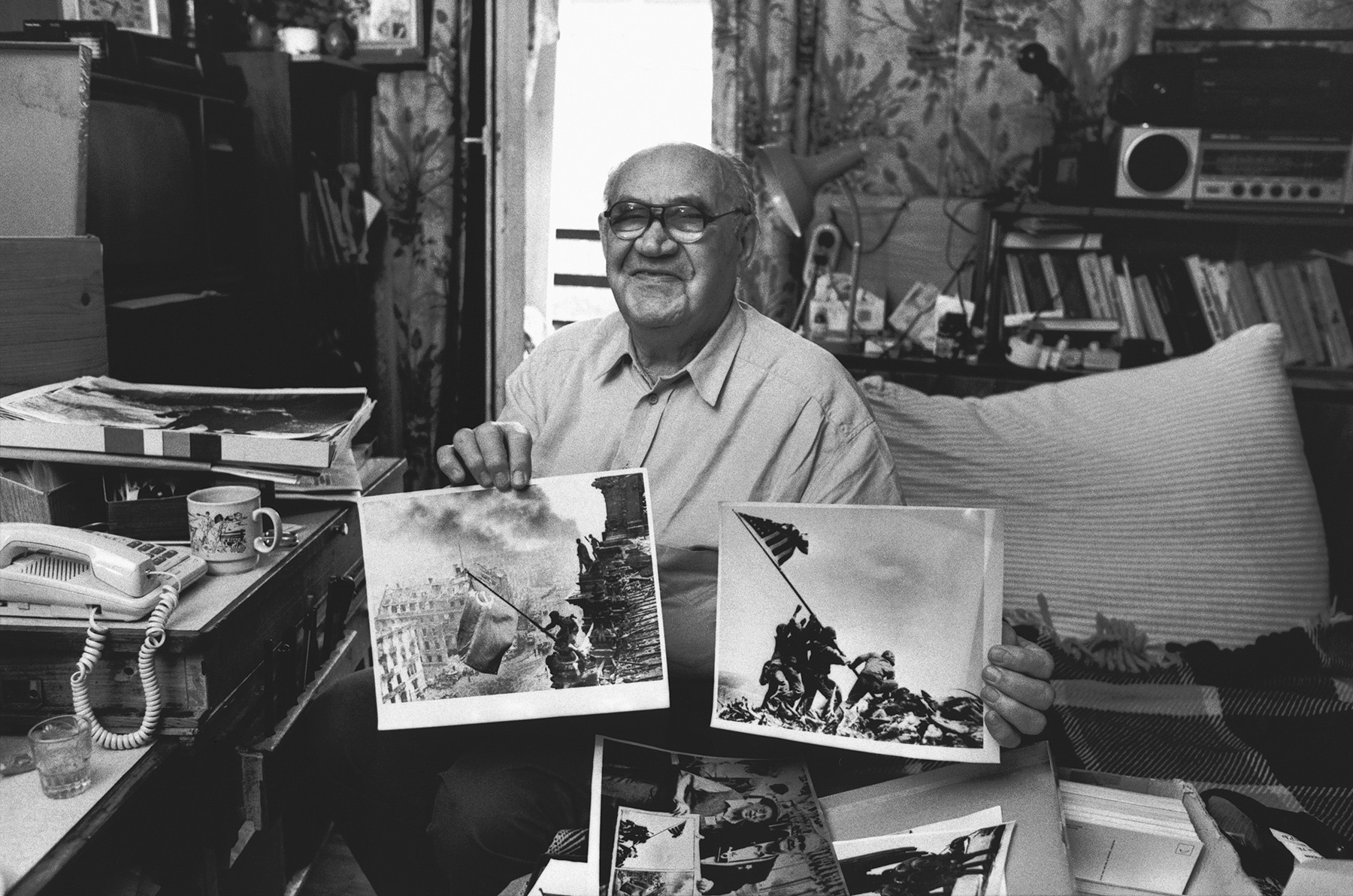 Evgeny Khaldey displaying a print of his most famous image of Soviet troops placing the hammer and sickle flag on the Reichstag. He also holds, on the right, American photographer Joe Rosenthal's image of American troops raising the stars and stripes after a battle at Iwo Jima in February of 1945.