Amazing heroism and unlimited horror: 16 photos of the Soviet 1940s

1. End of the Soviet-Finnish war 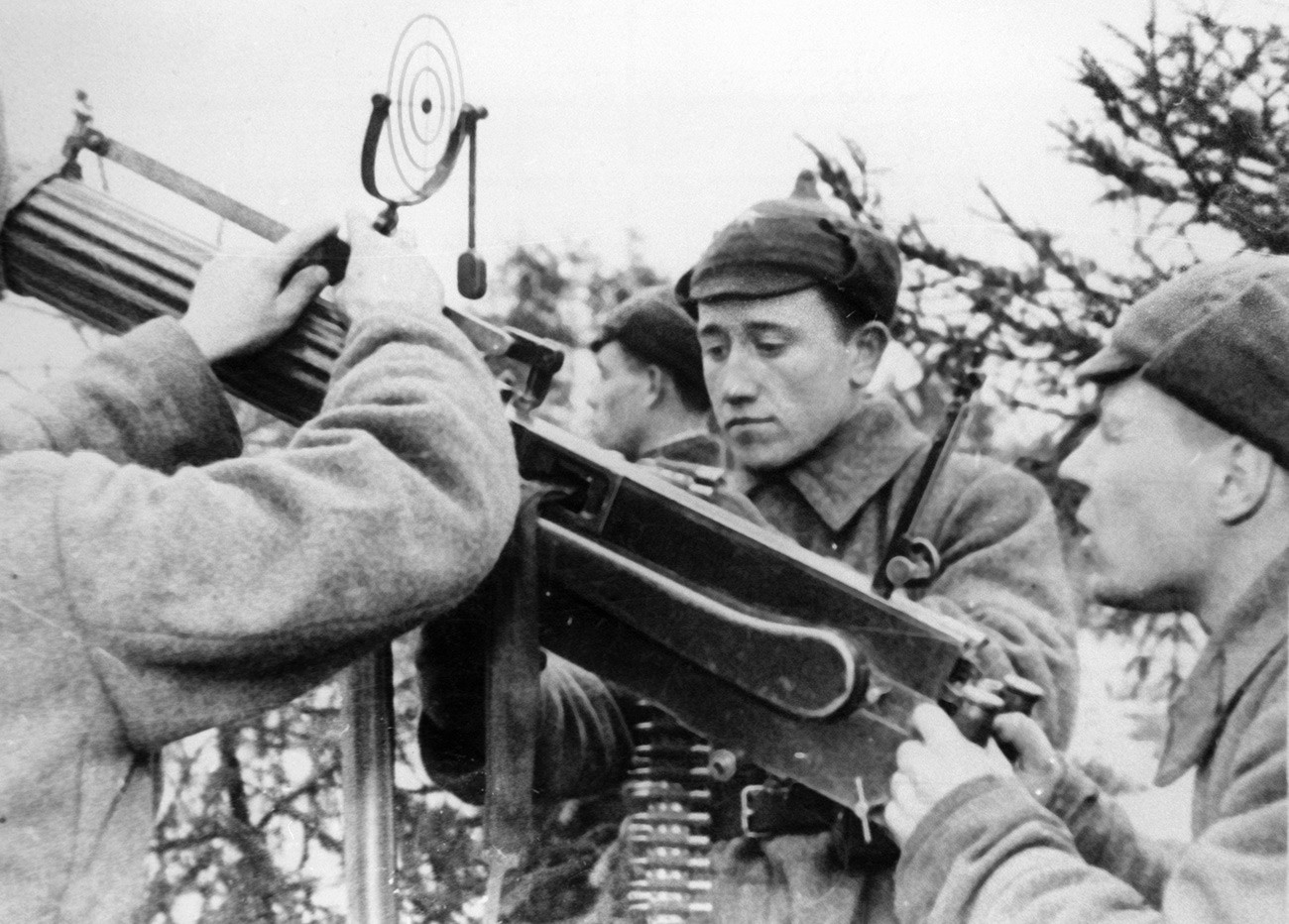 The Red Army’s Finnish campaign was supposed to be a walk in the park, but surprisingly fierce resistance by the Finnish army turned the war into a nightmare for Soviet troops, who lost over 126,000 men. On the other hand, the Soviet military drew important conclusions out of the conflict and significantly raised the fighting capacity of the Red Army before the Nazi invasion in 1941. 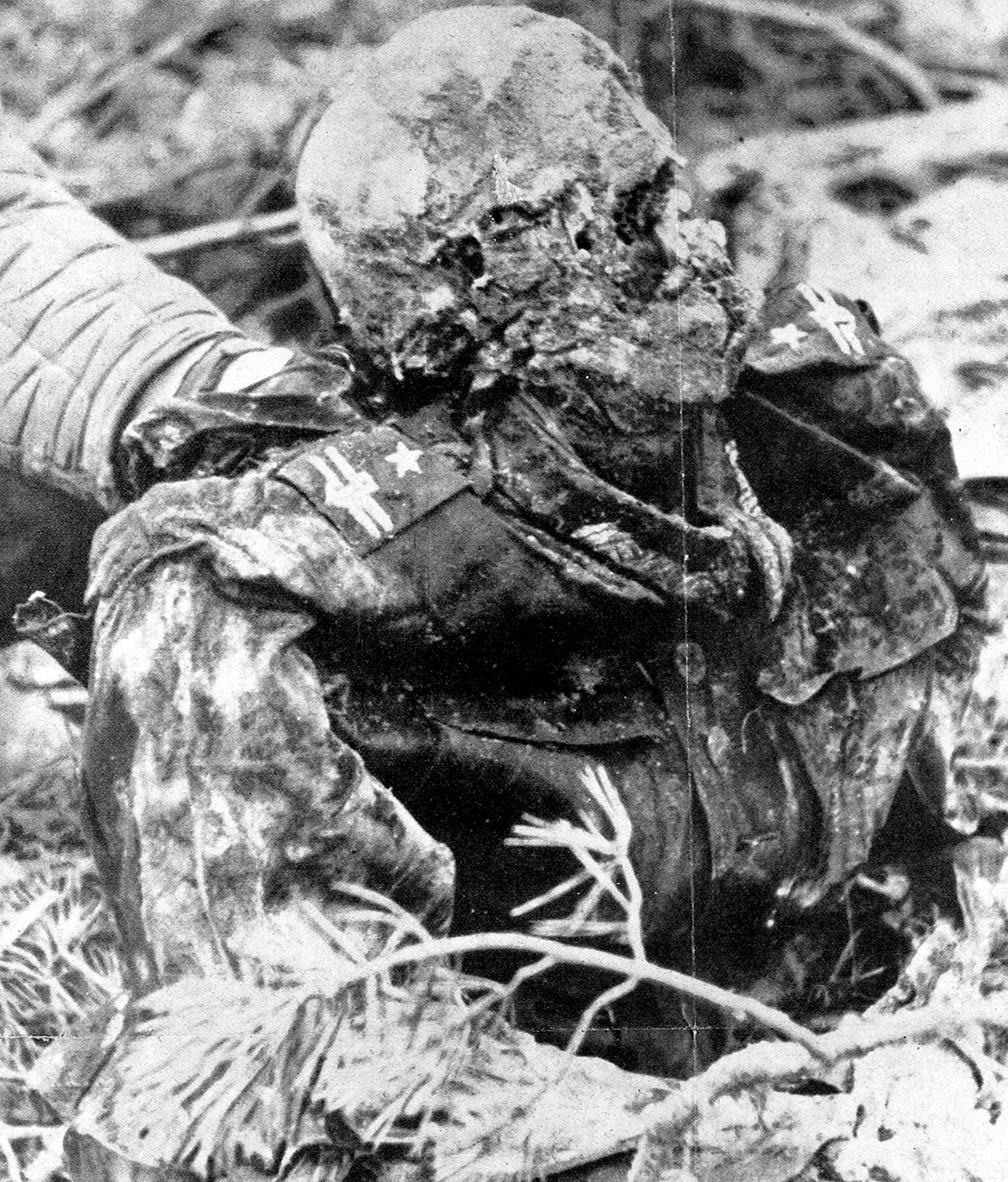 The corpse of a Polish commander (major) is found in some pits, discovered by the Germans in April, 1943 in the forest of Katyn ( Byelorussia).

Throughout April-May 1940, the NKVD, the USSR's secret police, executed almost 20,000  (exact numbers are still being disputed) Poles in Katyn Forest, Smolensk region, as well as in several camps across the Soviet Union. Most of them were Polish officers, captured as POWs during the Soviet invasion of Poland in 1939. There were also many representatives of the Polish intelligentsia, branded as ”dangerous anticommunist elements.”

3. Annexation of the Baltic States and Bessarabia 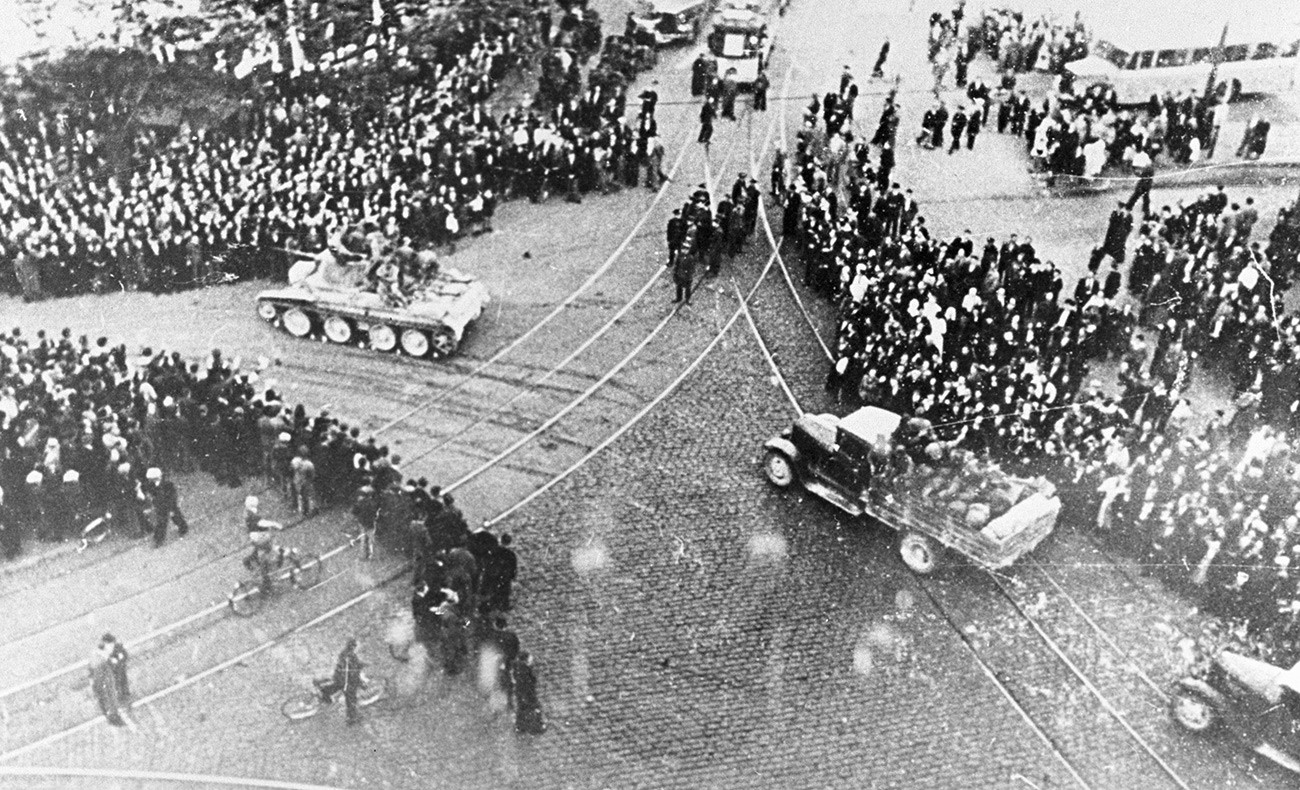 According to secret Soviet-German agreements, the Baltic states and Romania’s Bessarabia (modern Moldova) were assigned to the Soviet sphere of influence, and in June 1940 the Soviets began to act. Realizing that they had no chance of fighting the USSR, the Latvian, Estonian and Lithuanian governments accepted Soviet demands of allowing the Red Army to enter the territory of the republics. Organized elections brought to power pro-Communist forces, which in turn voted to join the USSR. Romania agreed to cede Bessarabia to the Soviet Union only several hours before the Soviet invasion was due to start. 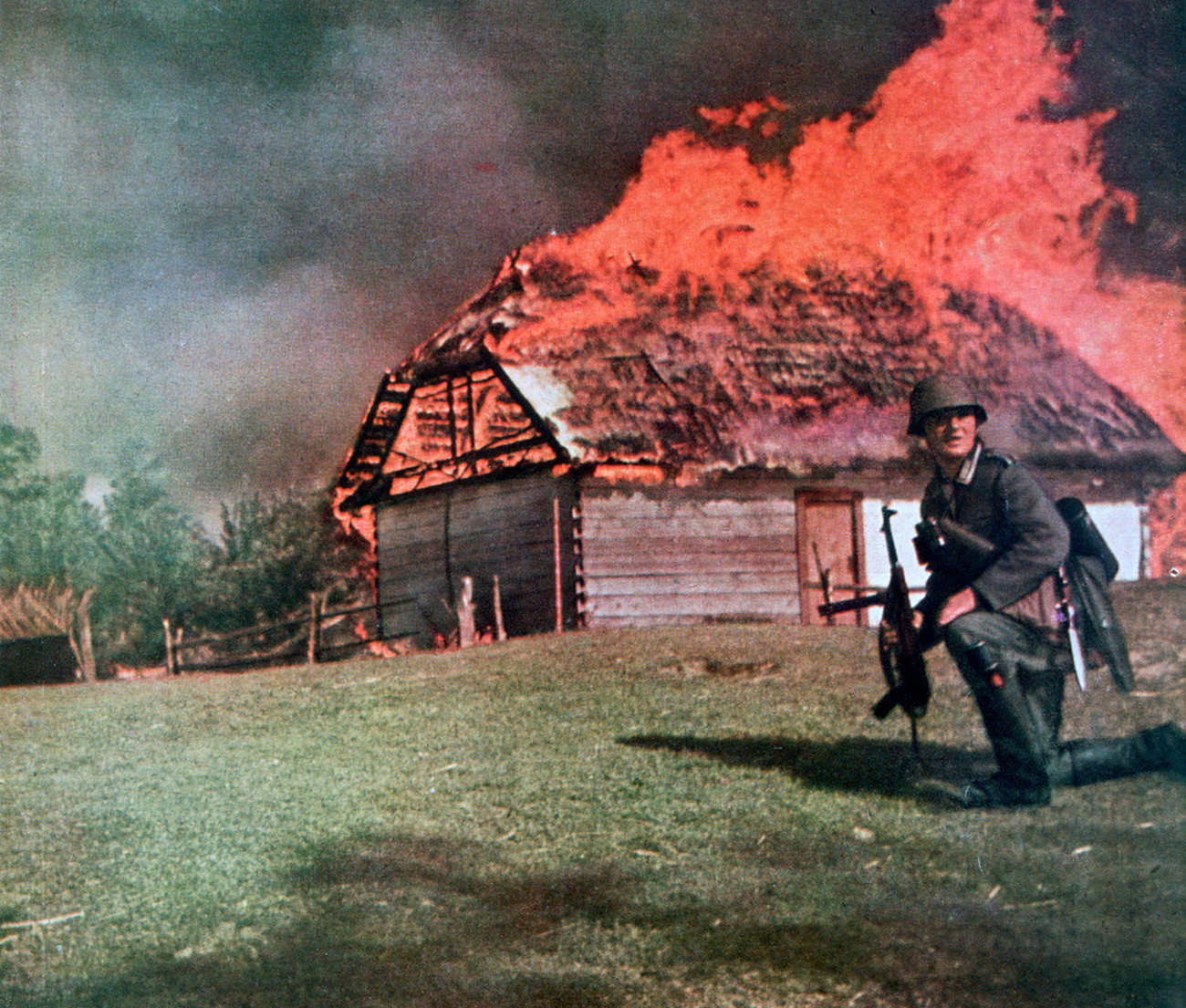 German soldiers fighting in the Soviet Union as part of Operation Barbarossa, 1941.

The German offensive, launched June 22, 1941, brought catastrophic disaster to the Red Army. Despite heroic and frantic resistance of Soviet soldiers, whole armies ceased to exist, being encircled and terminated; thousands of tanks and aircraft were destroyed. By the end of 1941, the Wehrmacht occupied Estonia, Latvia, Lithuania, Moldavia, Byelorussia and Ukraine, and stood at the gates of Moscow and Leningrad. Soviet troops lost over three million killed and captured, while German losses were over 700,000. 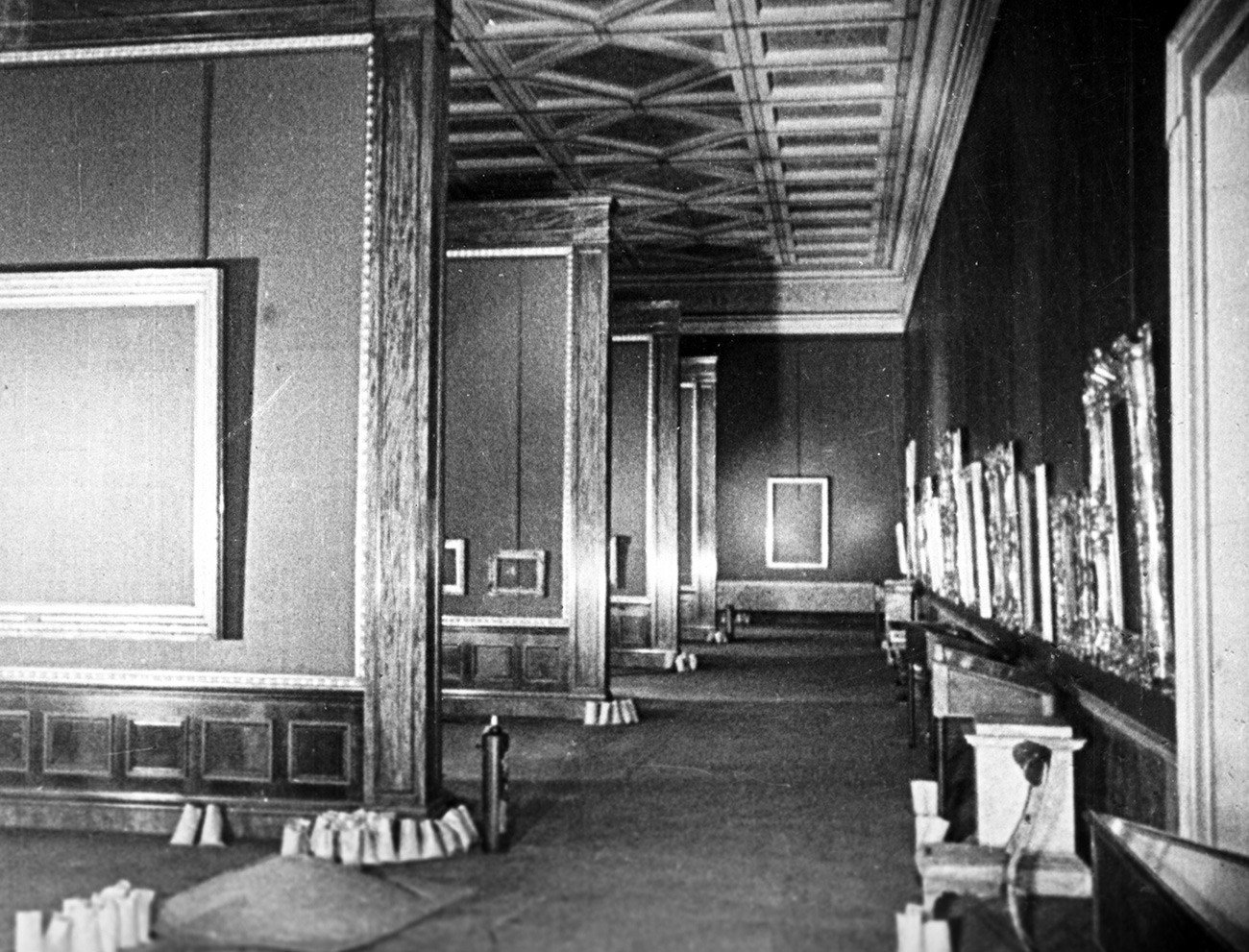 Empty halls of the Hermitage during the siege of Leningrad.

Evacuation of the largest art collection in Europe - exhibits of the Leningrad-based Hermitage Museum - started on the first day of the German assault on the USSR. In top secret, over 1.2 million out two million artworks were transported by railways to safe storage in the Urals. The evacuation had long been planned - since 1939 - and thus was conducted effectively and quickly. 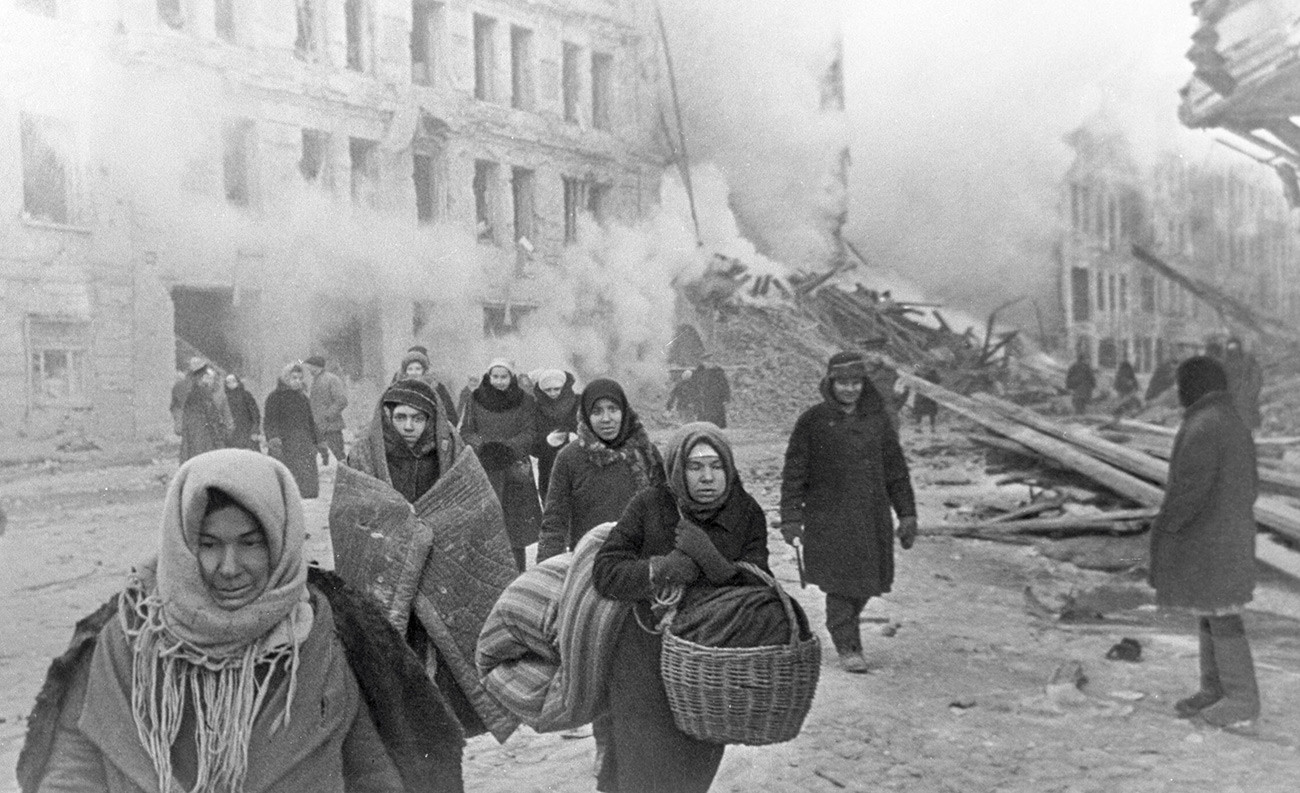 In September 1941 German and Finnish troops encircled the USSR’s second most important city - Leningrad. During 872 days of siege, the citizens had only one supply road - via frozen Lake Ladoga, which was permanently under enemy fire. The huge city desperately needed supplies and suffered from hunger, which led to the deaths of over 600,000 civilians. 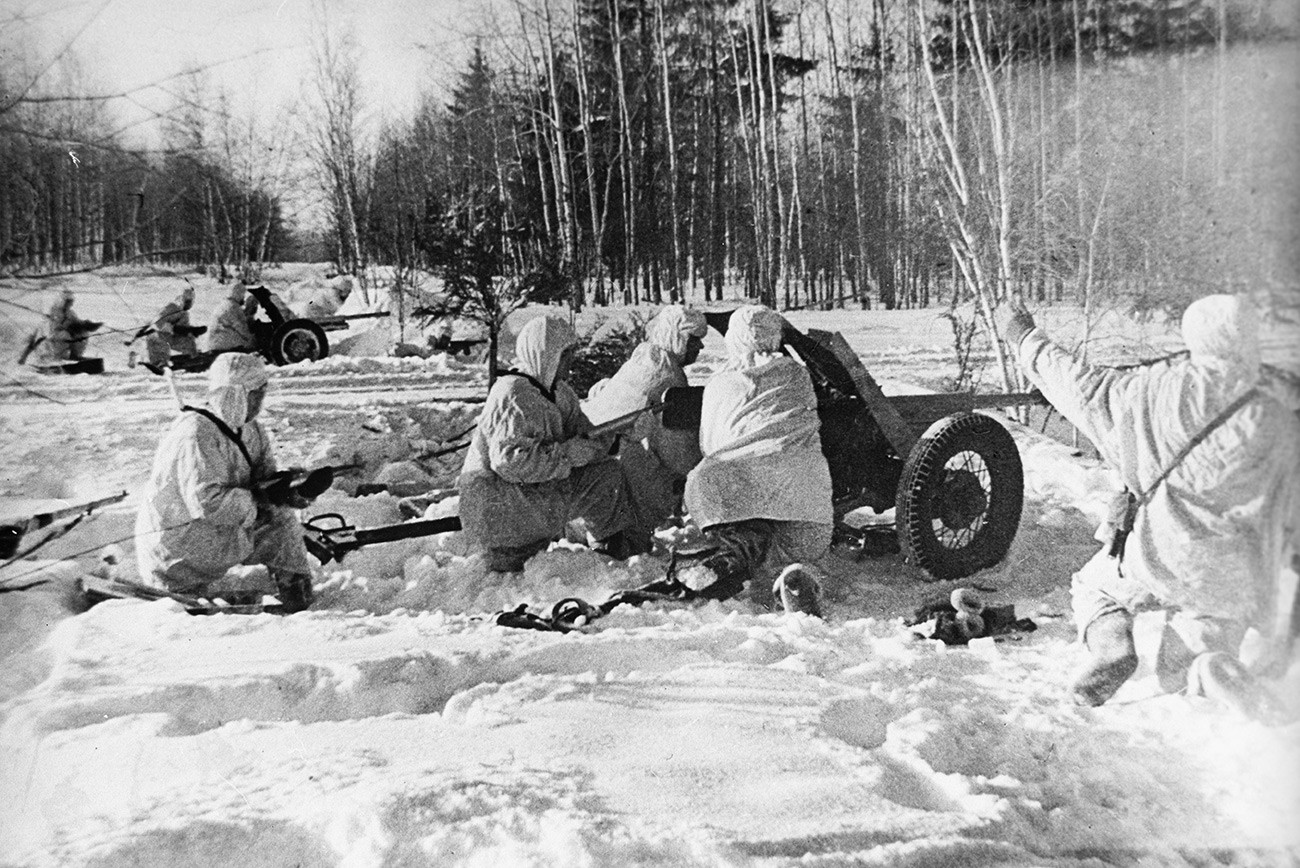 Soviet troops during the Battle of Moscow

After defending Moscow in hard battles of September-December 1941, Soviet troops launched a major counter-offensive against the exhausted Wehrmacht and forced it back between 90-150 miles from the Soviet capital. The Battle of Moscow became Germany’s first major defeat in WWII, after which Field Marshal Walter von Brauchitsch dubbed the Red Army Germany “first serious opponent.” 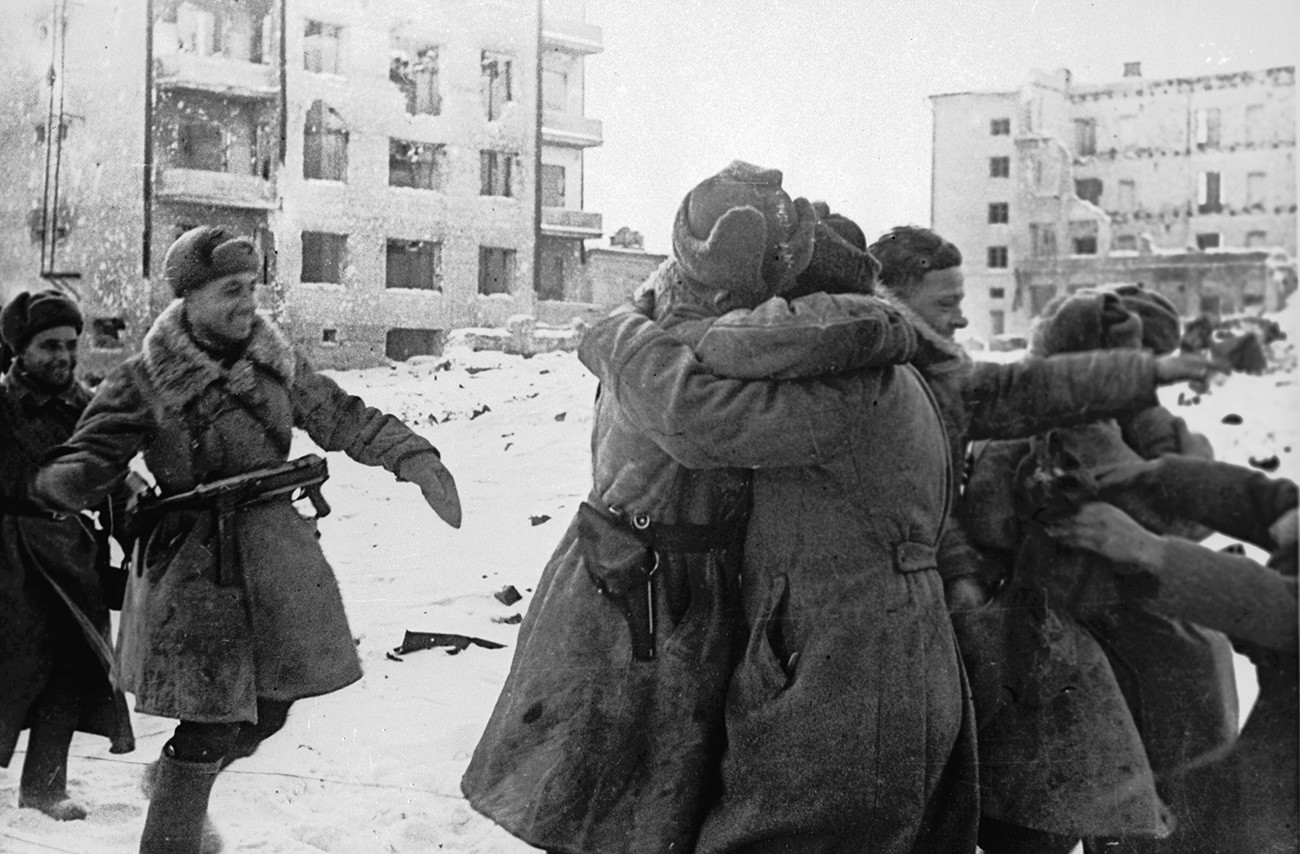 Welcoming the Soviet soldiers who besieged the Nazists in Stalingrad.

The turning point of WWII, the Battle of Stalingrad was one one of the bloodiest in history and took the lives of almost 1.3 mlllion on both sides. When German troops struck deep in the city, the weaker Romanian armies covered their flanks. On Nov. 19, 1942, Soviet troops launched Operation Uranus, breaking through Romanian lines and encircling the German Sixth Army, which was eliminated in January, 1943. 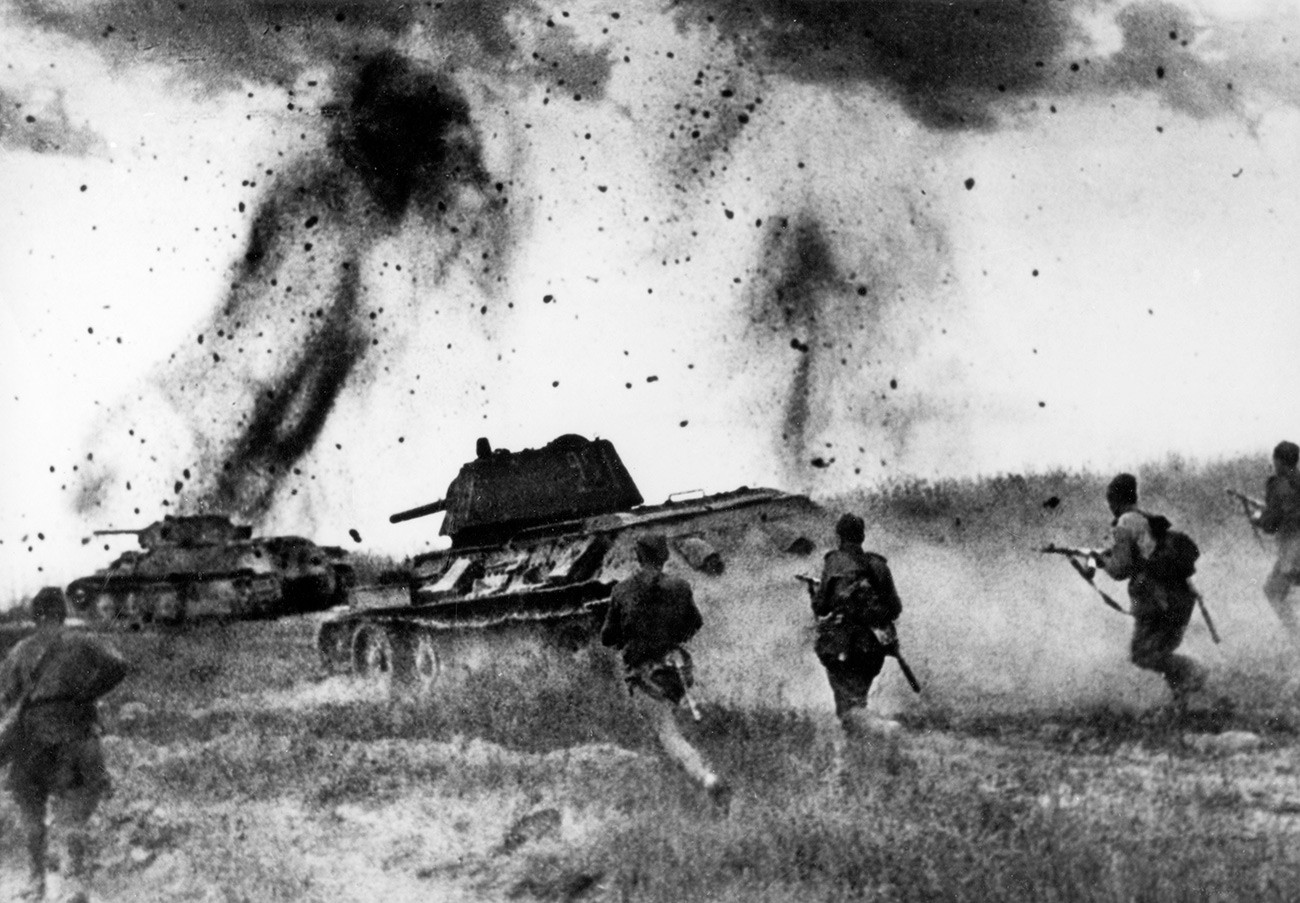 Soviet troops assault during the Battle of Kursk

One of the biggest battles in history, the Battle of Kursk involved almost two million troops, over 6,000 tanks and 4,000 aircraft. Suffering defeat at Kursk, the Germans lost the strategic initiative in the war and began a retreat that would end in their complete defeat and unconditional surrender. 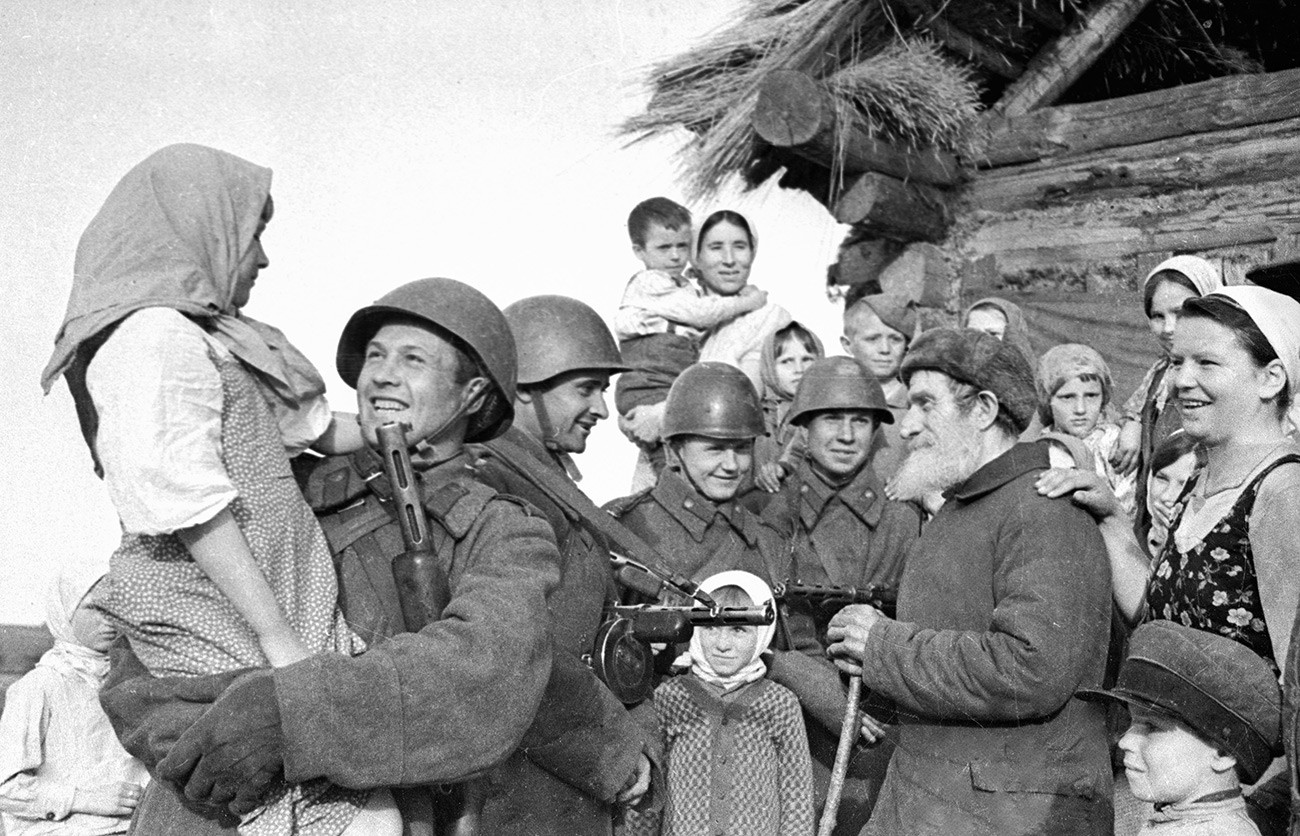 The Red Army’s offensive in Nazi-occupied Byelorussia, codenamed Operation Bagration, was its revenge for the military disasters of 1941. The Soviet Blitzkrieg was planned for the 23rd June, almost to the day Barbarossa had started three years earlier. With rapid, massive and coordinated strikes of land troops and the air force, the Soviets breached the enemy defenses, encircling and completely annihilating Germany’s Army Group Center. 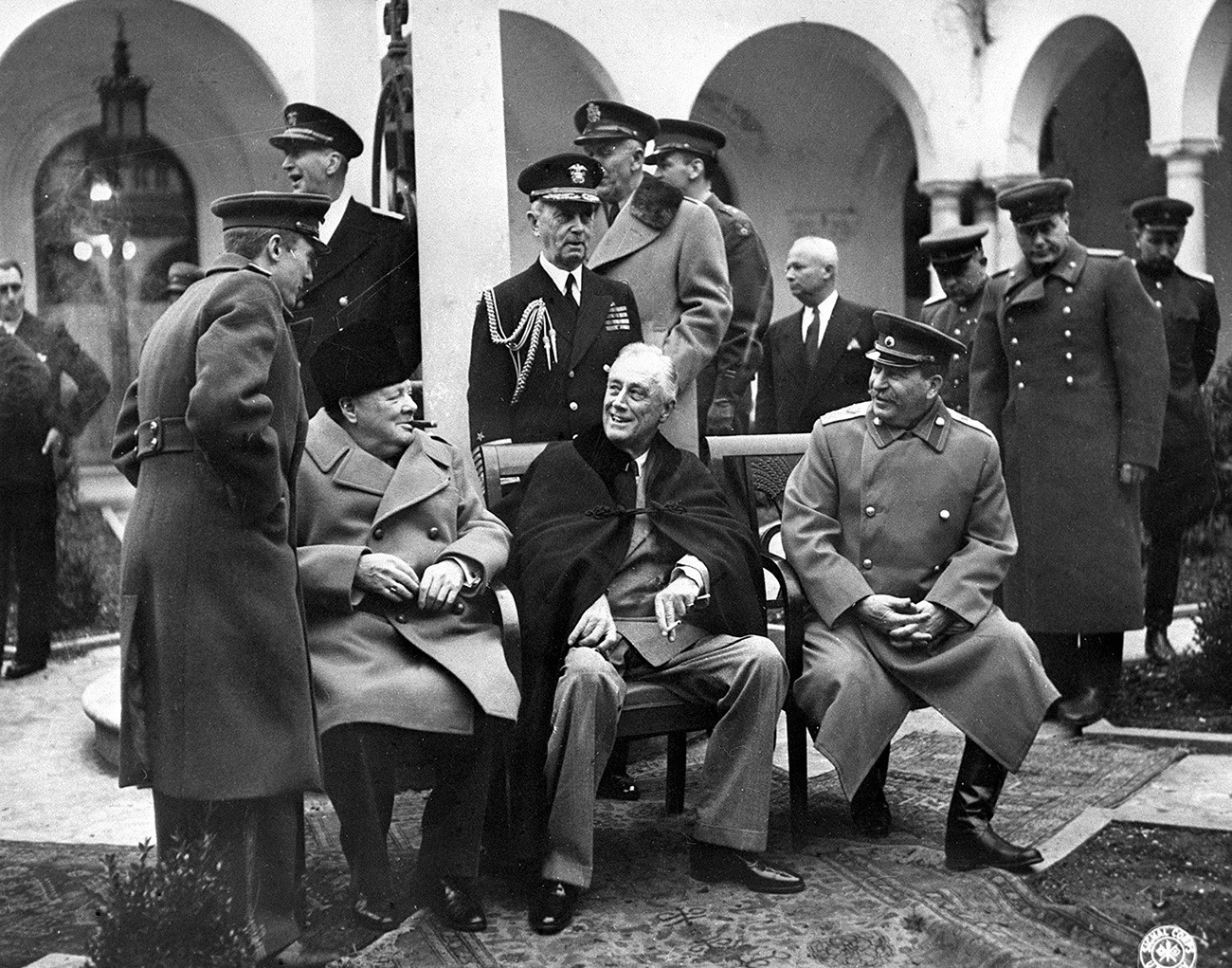 The Yalta (Crimean) conference of three allied powers on February 4-11, 1945. In the center (seating from left to right): British Prime Minister Winston Churchill, US President Franklin Delano Roosevelt and Marshal of the USSR Joseph Stalin.

This Allied leaders’ conference determined the structure of Europe for the next 40 years. During long and complicated discussions Stalin, Churchill and Roosevelt decided the post-war fate of Poland, Germany and Yugoslavia, and laid the foundations of the United Nations. 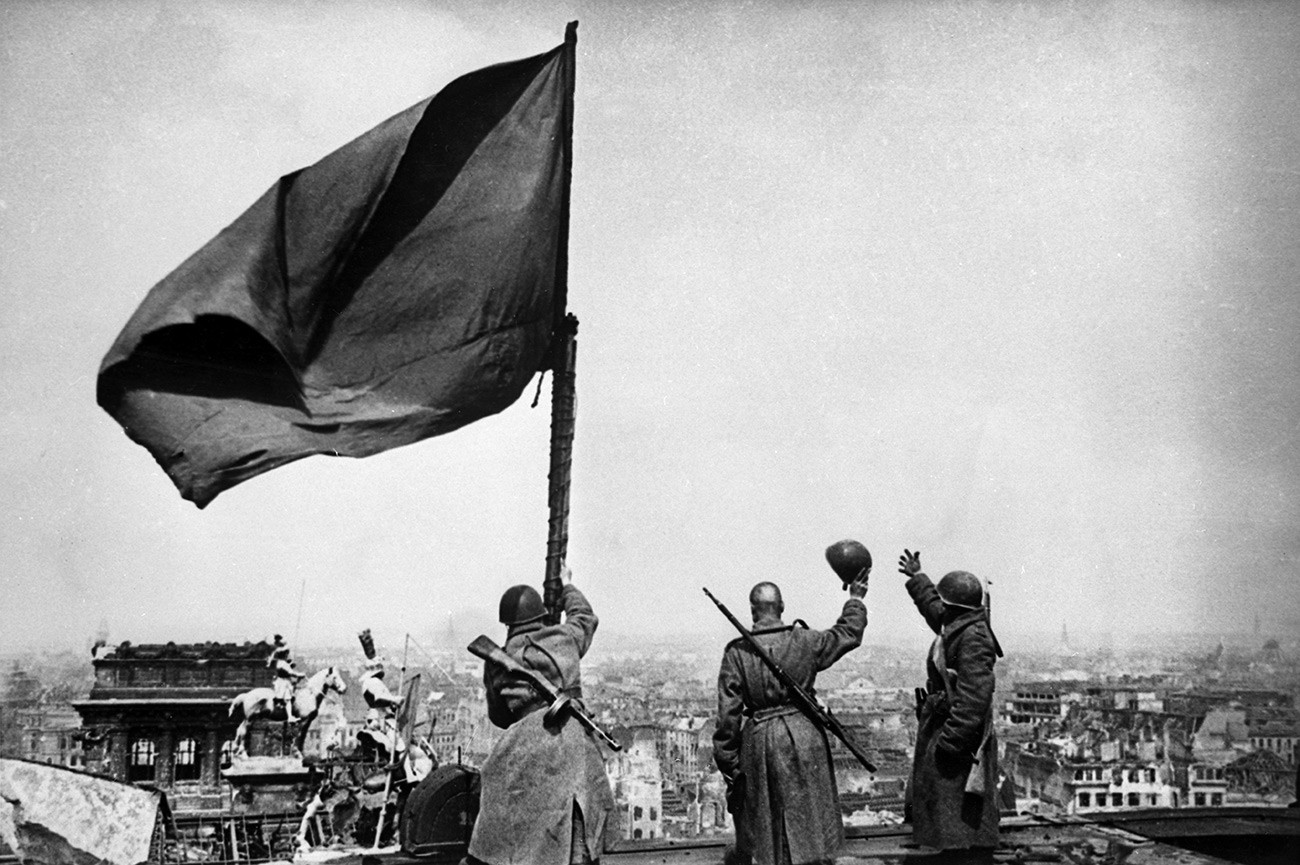 Although Berlin was taken on May 2 and the Third Reich surrendered on May 8, the battles in Europe were not over for the Red Army. It had still to undertake the last major strategic operation in Europe and destroy remaining German troops in Prague and Czechoslovakia, which was done by May 12.

13. Collapse of the Kwantung Army 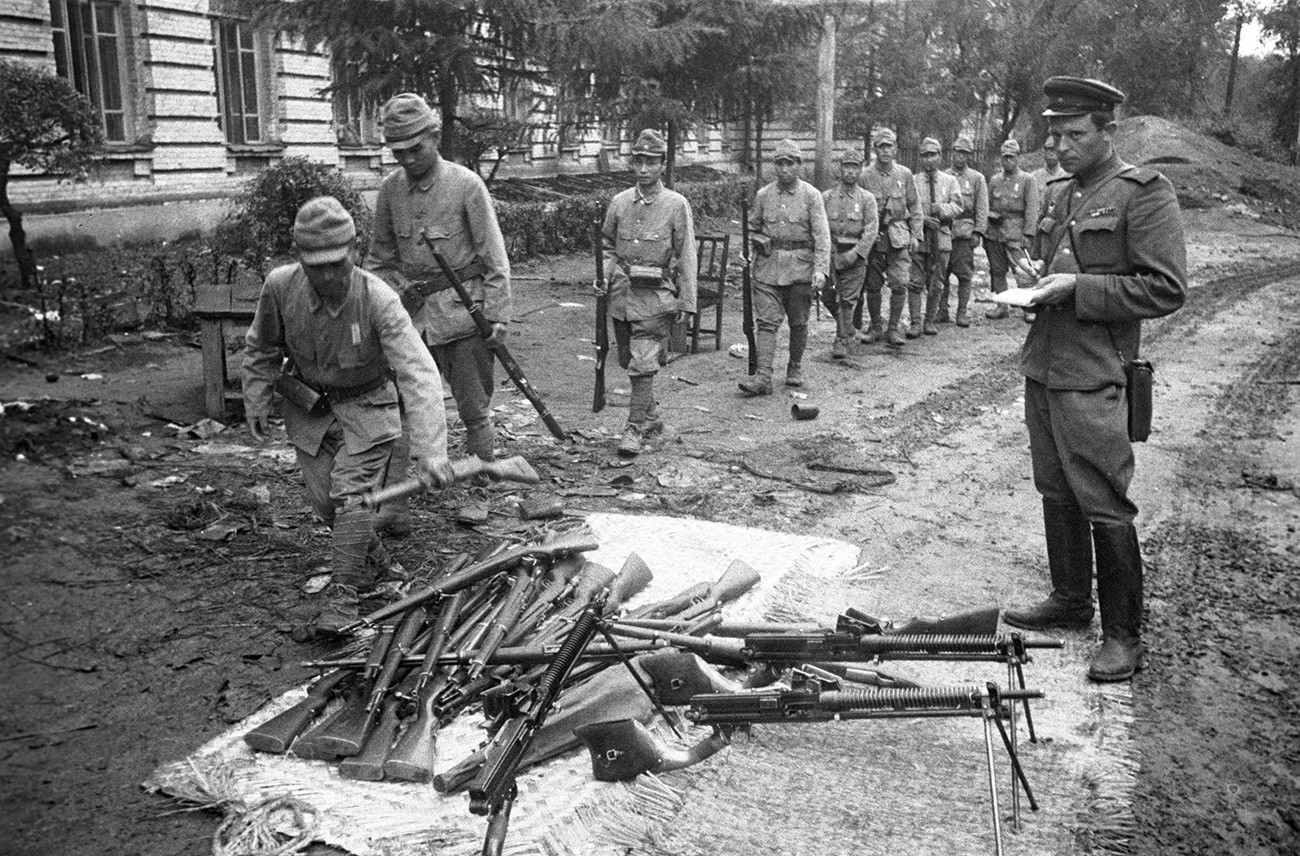 As it was decided with the Allies, the Soviet Union declared war on Japan three months after the victory over Germany. The Soviet offensive sliced through Japanese defenses like a knife through butter, advancing deep into the territory of North-Eastern China on a front of 180-500 miles. Within 10 days of the launch of the offensive the Kwantung army was totally crushed. 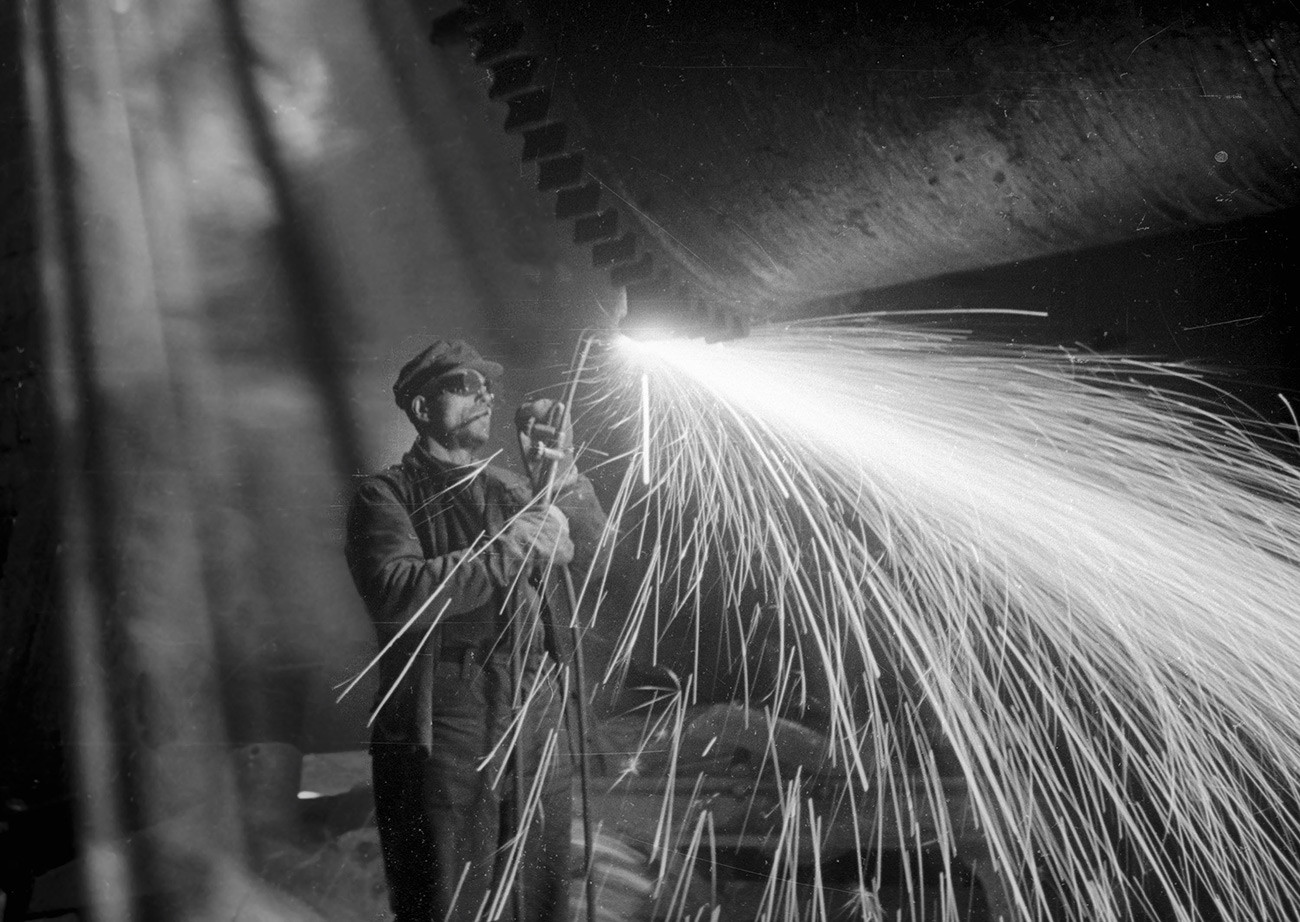 Welder of Zaporozhstal plant at work in 1946.

The Soviet economy suffered great damage during WWII: over 1,700 cities and 70,000 villages were turned into the ruins, 32,000 factories and plants were destroyed. However, by mobilizing all the forces of the USSR, by the late 1940s the country has not only restored pre-war levels of industrial production, but exceeded it twice. Agriculture was restored a little, but later, in the early 1950s. 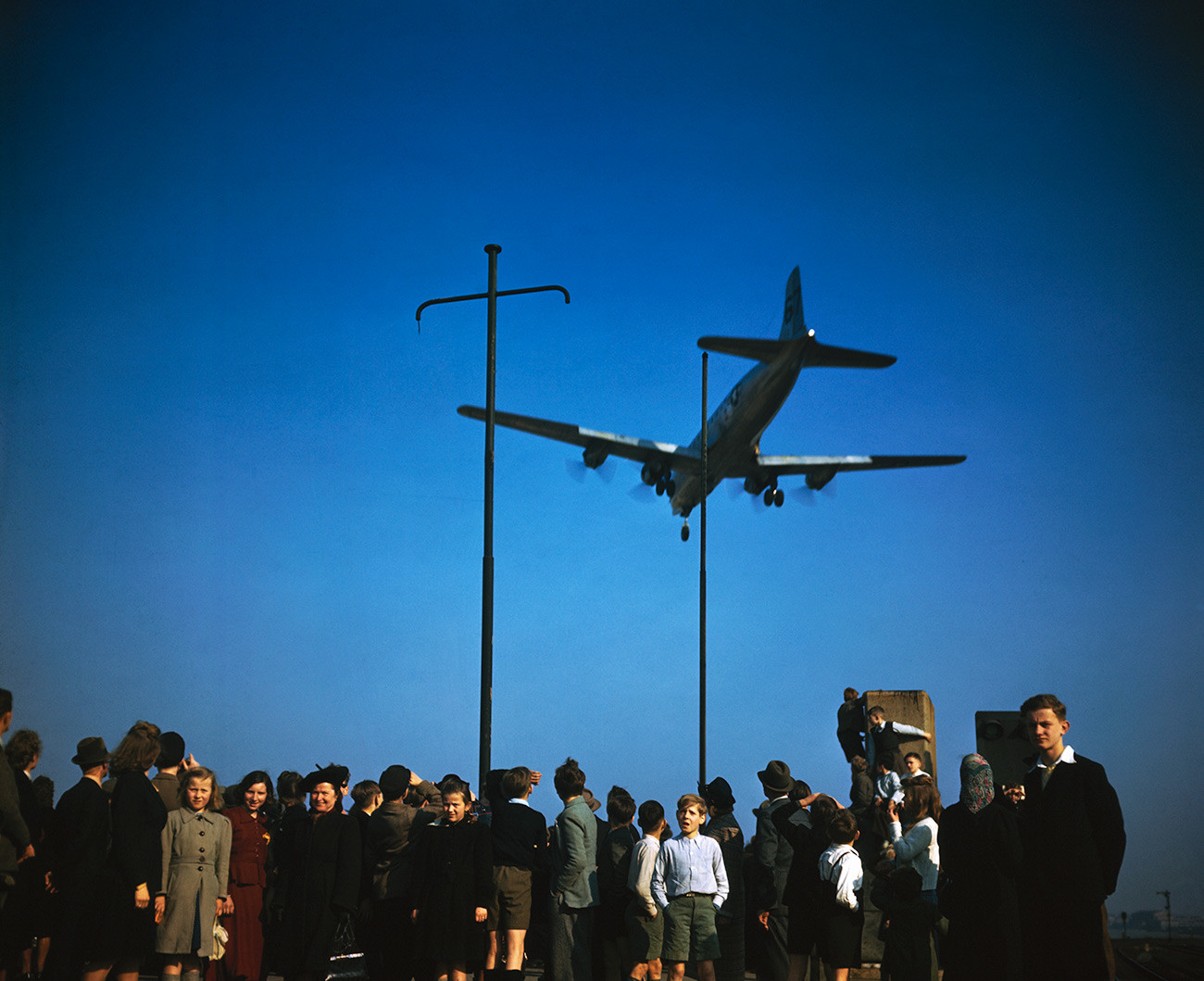 Despite agreements between the Soviets and the Western powers on the joint solution of German problems, the U.S. and UK initiated significant economic reforms in western Germany without consulting the USSR. As a response the Soviets blockaded all routes from the western Germany to western Berlin, except for air traffic. The Berlin Blockade lasted from June 1948 until May 1949, and was one of the first crises of the Cold War. 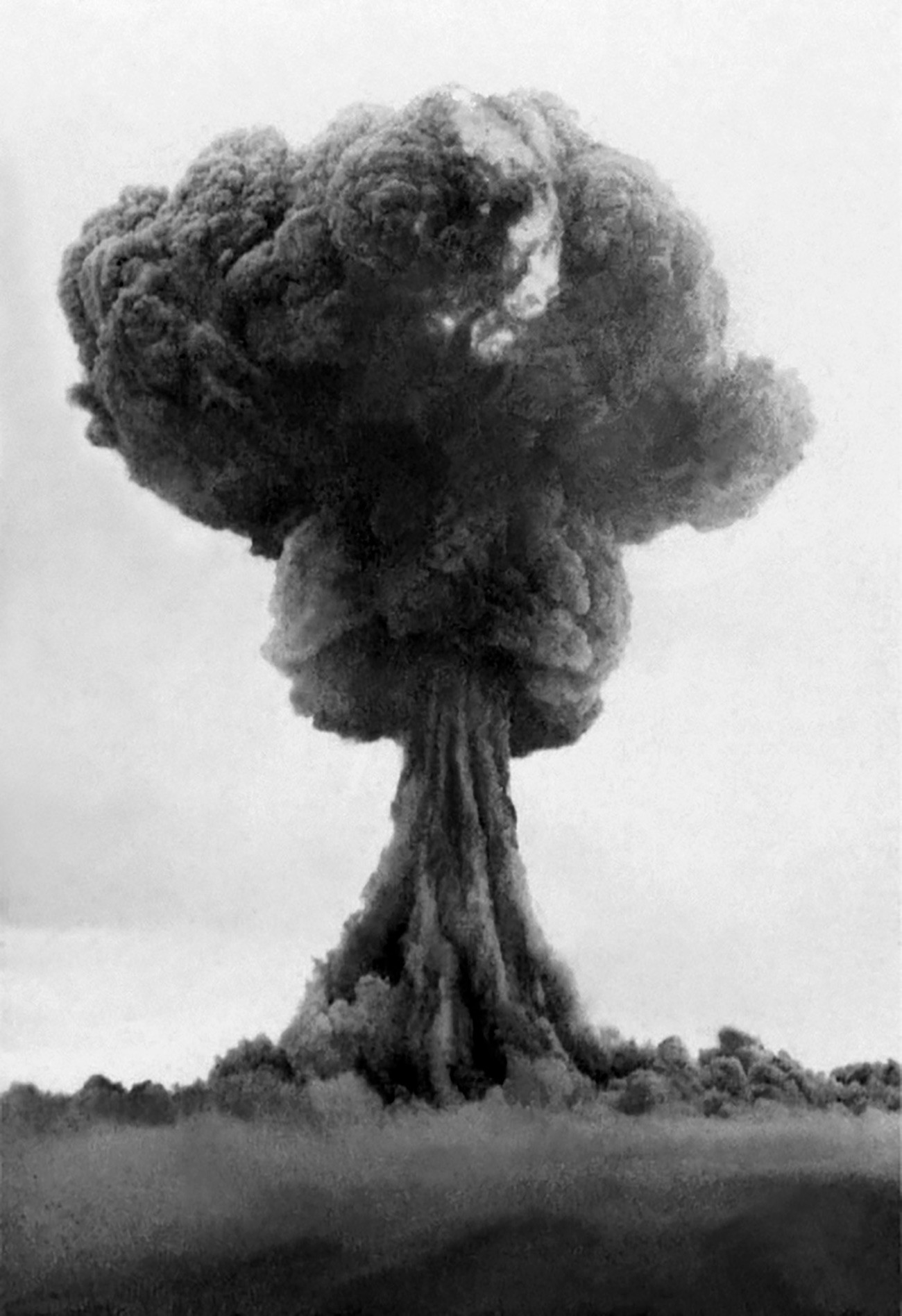 Only 29 August 1949, the Soviet Union became the second nuclear-weapon state in the world. At Semipalatinsk (in modern Kazakhstan) its first atomic bomb RDS-1 was tested. It had much in common with America’s Fat Man, dropped on Nagasaki during WWII.