From great hopes to Great Terror: 17 Soviet photos of the 1930s 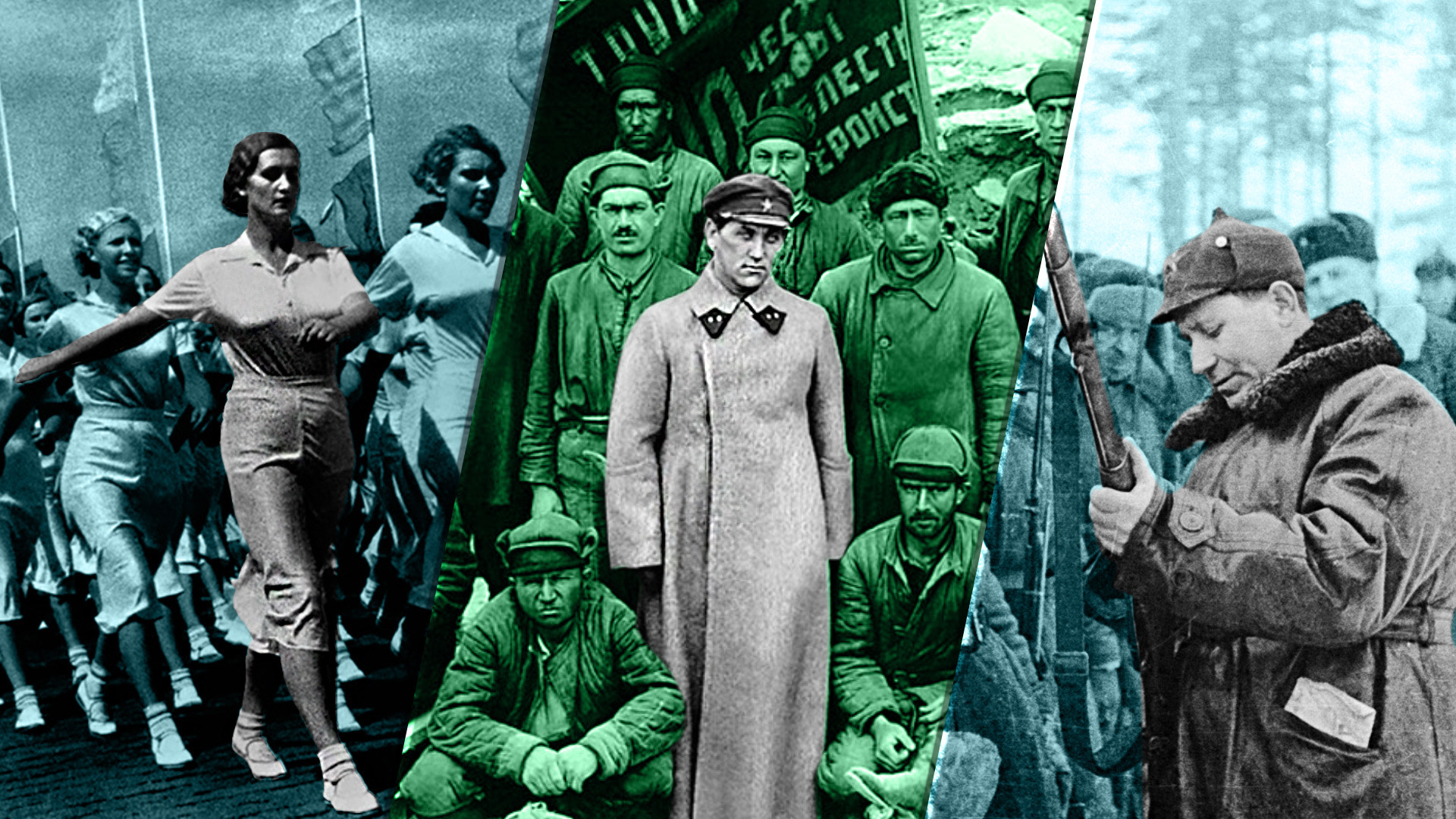 State Literary Museum, Ivan Shagin/russiainphoto.ru, David Trachtenberg/Sputnik
The 1930s in the Soviet Union are generally associated with the mass repressions of Stalin’s dictatorship. However, it was also a time when Soviet cinema flourished, unbelievable success in Arctic exploration was achieved and the rapid creation of a powerful national industrial capacity was being built. 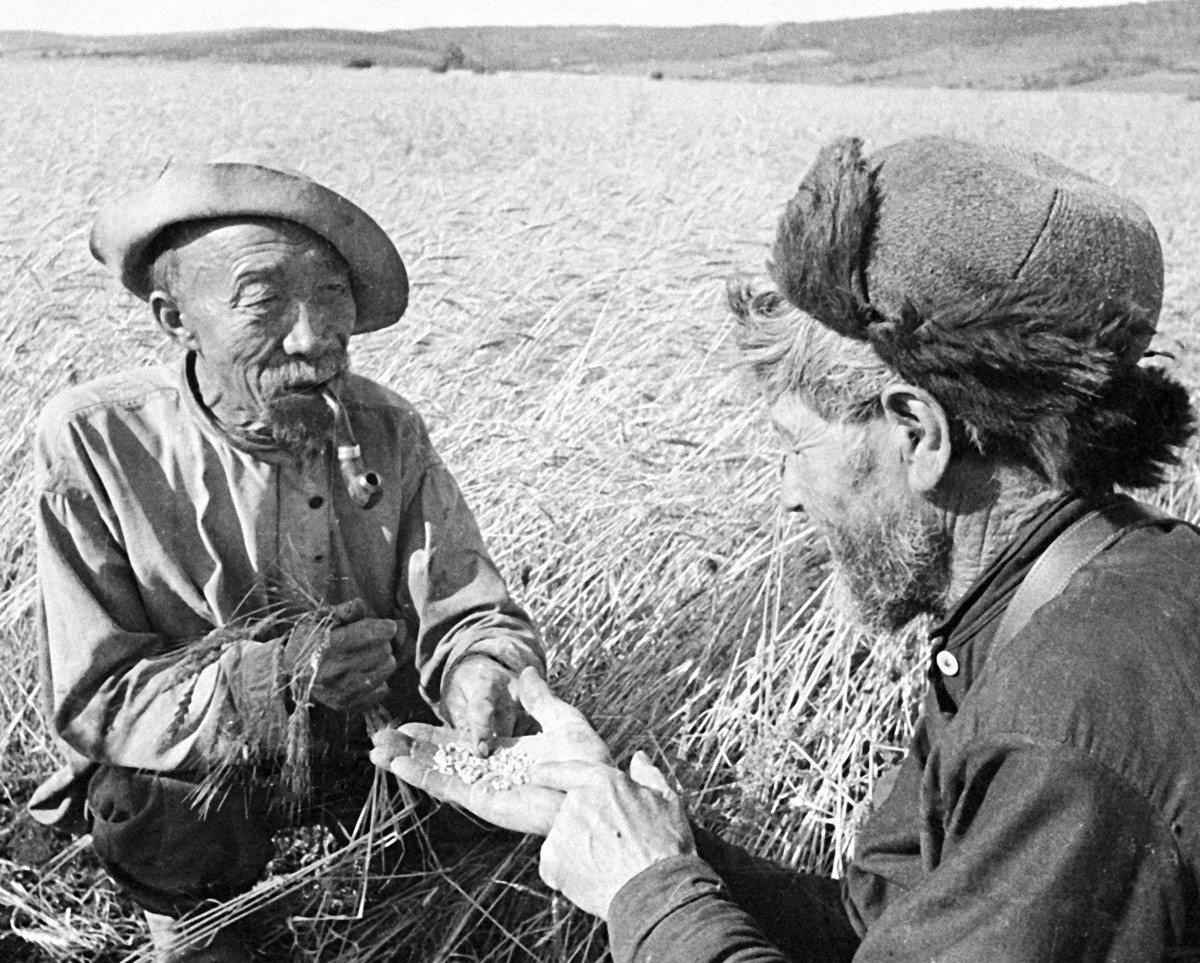 Collective farm elders checking the quality of grain of the new harvest in Eastern Siberia. 1936.

Launched in the late 1920s collectivization (consolidating individual peasant landholdings and labor into collective farms) was undertaken in a brutal and uncompromising manner, which finally led to wide public resistance. On 2 March 1930, Joseph Stalin’s article “Dizzy with Success” was published. It was stated that agricultural collectivization had been carried out with excessive zeal, leading to "excesses" that had to be corrected. After that the pace of collectivization was significantly reduced. 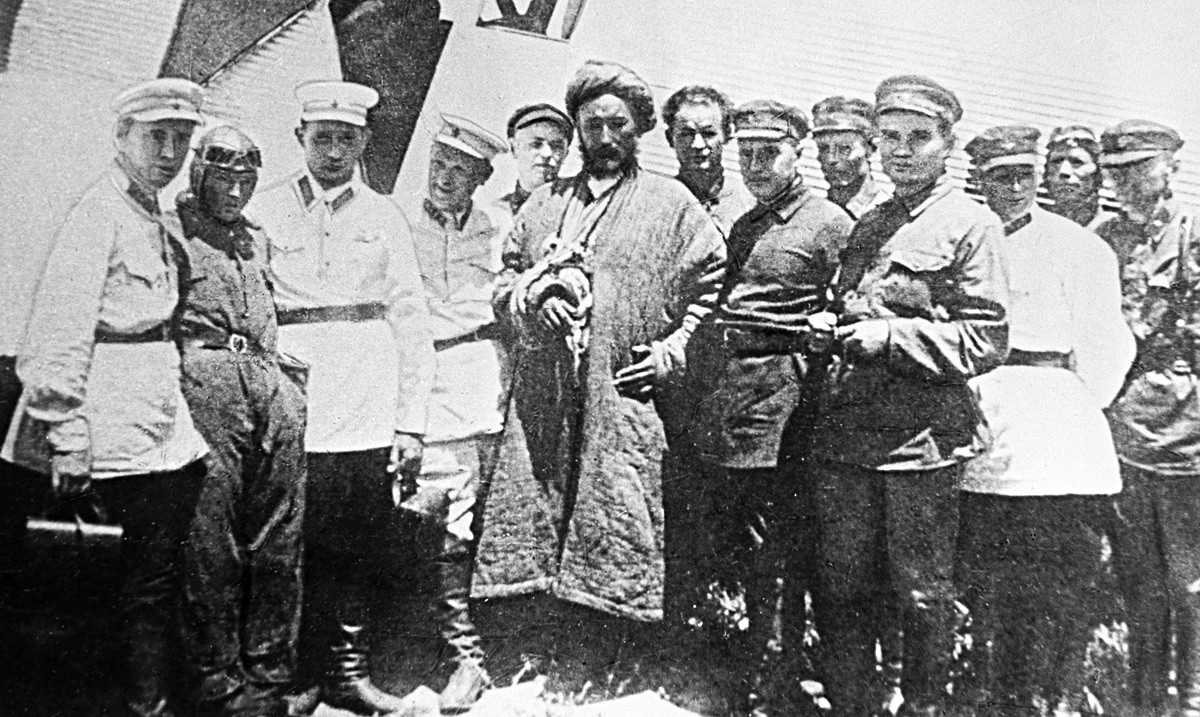 A group of Joint State Political Directorate officers with Ibragim Bek (center), leader of the Basmachi armed resistance to Bolsheviks. 1931.

Fueled by the Islamic slogans, the so-called Basmachi struggled against the Bolsheviks for national liberation in Central Asia. They led a partisan war, destroying railways, attacking small settlements and killing Communist activists. In 1931-1932 the Red Army terminated the main Basmachi forces. However, separate clashes occurred until the early 1940s. 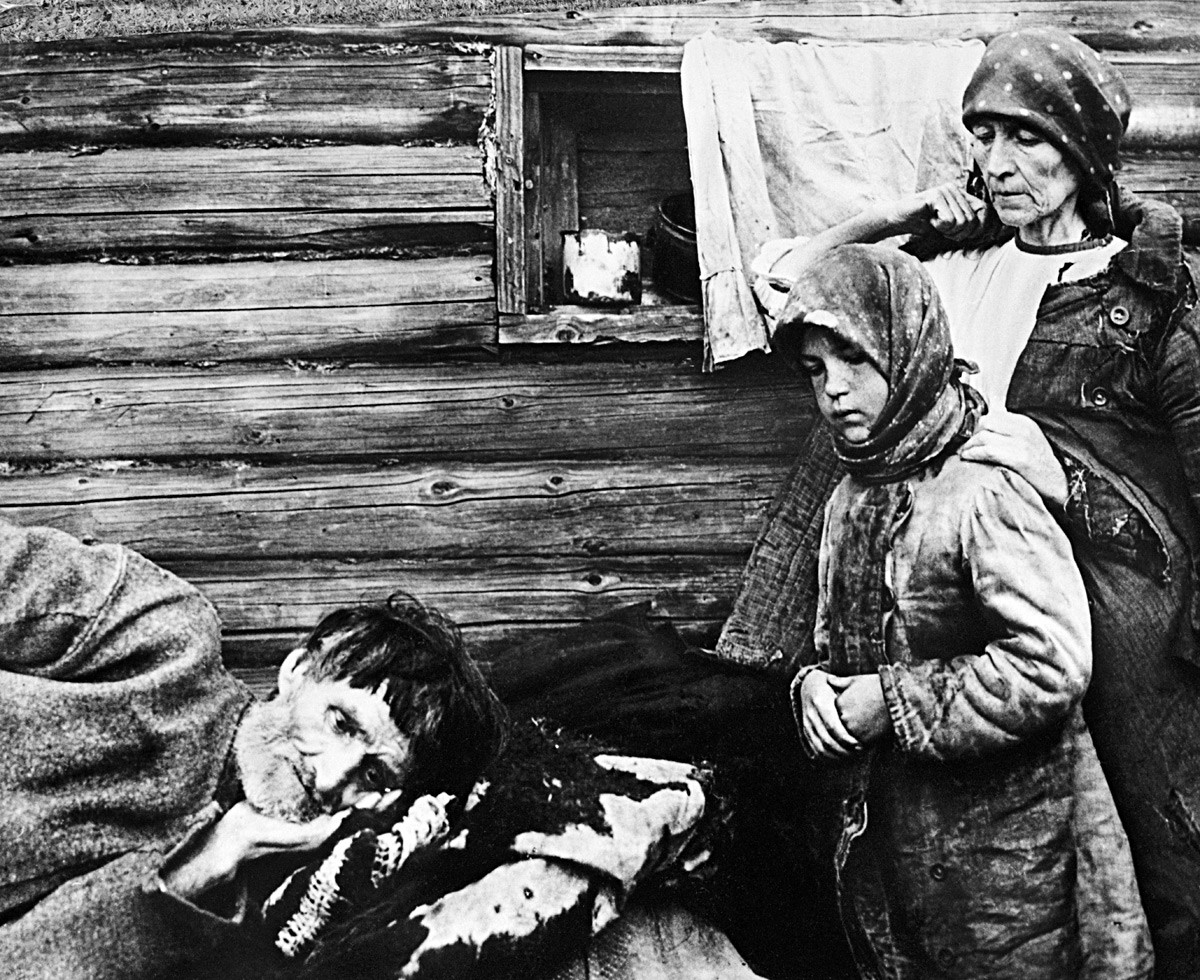 Full collectivization and forced requisitioning of grain led to famine over huge territories of Ukraine, the Volga Region, the Southern Urals, Western Siberia and Northern Caucasus and the deaths of over seven million people. 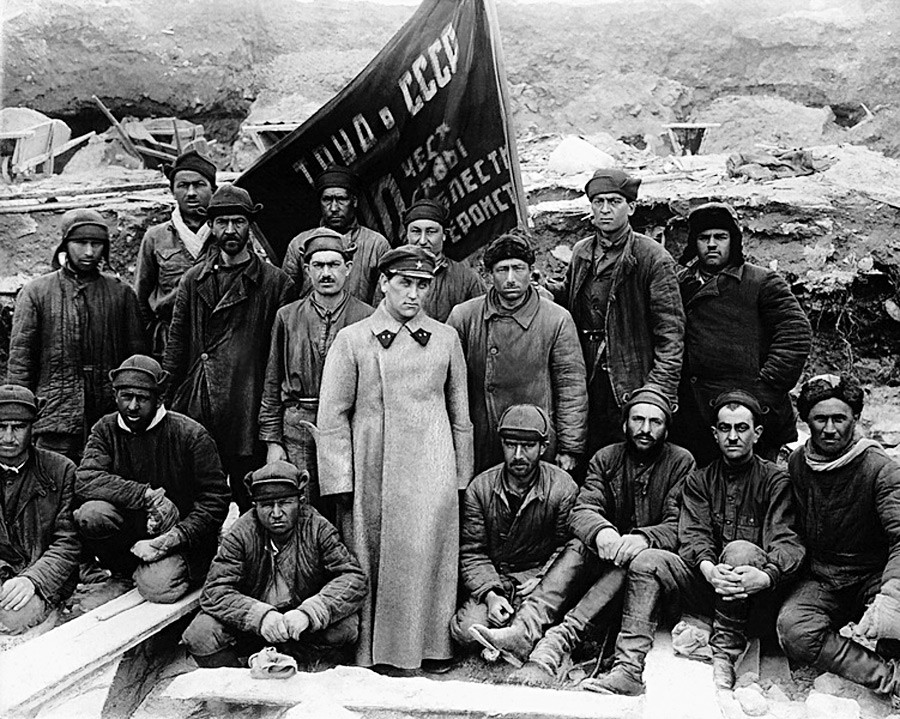 A camp convict with a Joint State Political Directorate officer at the construction of a canal, 1933.

The Soviet forced-labour camp-system was in full swing during the 1930s. Up to two million people were in hundreds of camps across the country. During the whole decade, over 360,000 convicts died due to brutal treatment, hunger, and exhaustion during construction of railways, canals, factories and hydroelectric stations. 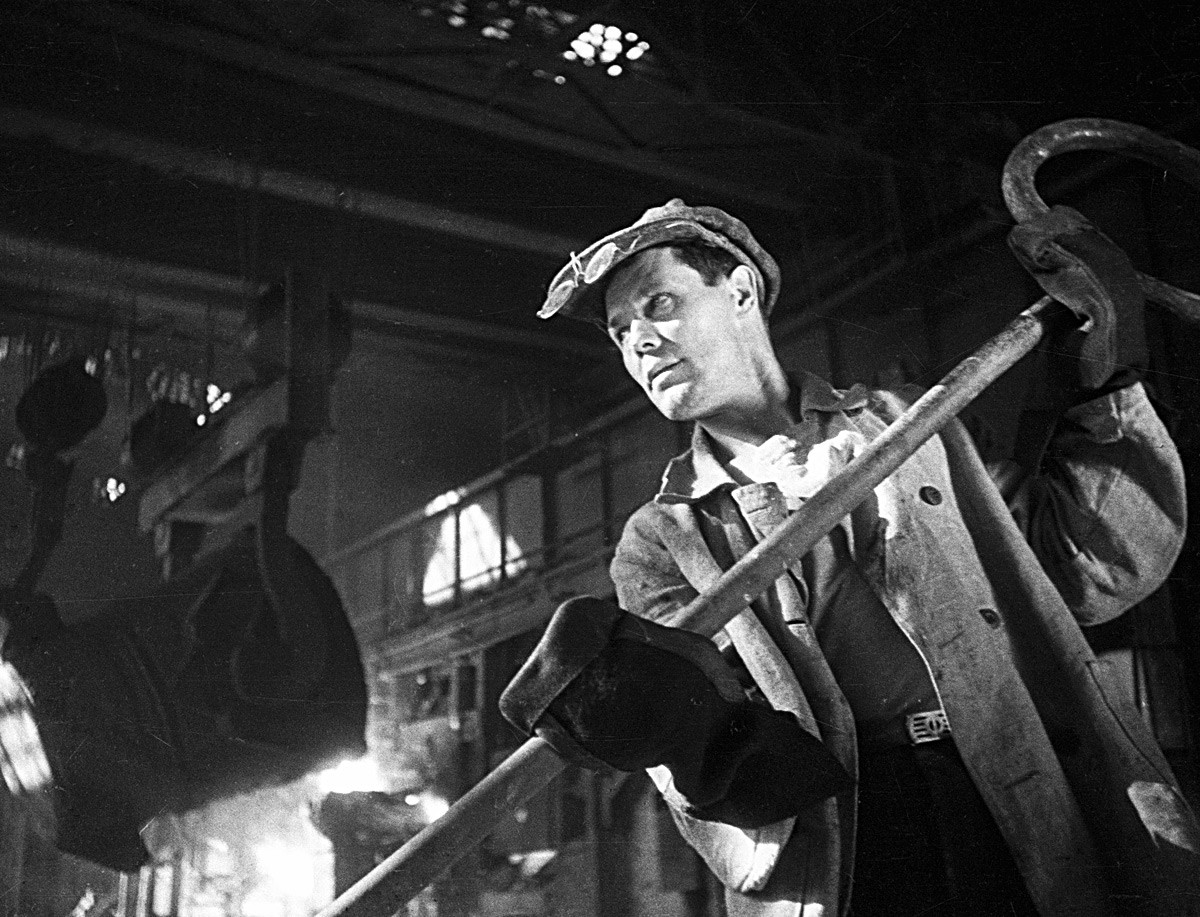 A worker at Magnitogorsk Iron and Steel Works. 1937.

During the 1930s the Soviet Union achieved impressive results in industrialization, becoming one of the world’s industrial leaders. Over 4,500 new factories and plants were built. A significant role in this was played by invited German and American specialists, such as Albert Kahn. In general, the newly-created industrial capacity allowed the Soviets to significantly modernize its armed forces, which was essential due to the approach of a new global conflict.

6. Lyubov Orlova and the flourishing of Soviet cinema 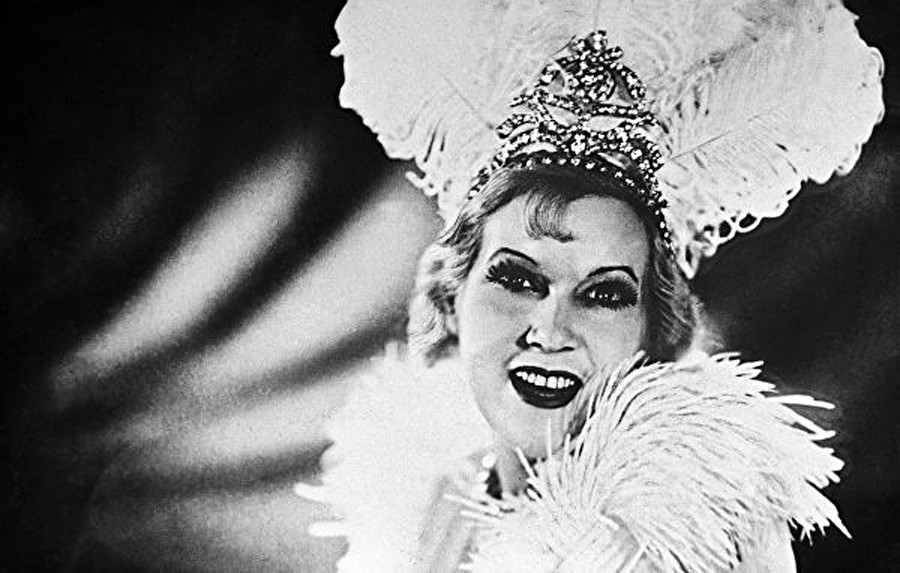 A scene from the movie "The Circus" by Grigory Aleksandrov with Lyubov Orlova as Marion Dixon.

Rising standards of acting and professional directing and the implementation of sound and high quality decorations enabled Soviet cinema to reach unprecedented heights. Some of the movies of that epoch, such as “The Circus,” “Volga-Volga” and “Jolly Fellows” became all-time hits for Soviet and later Russian spectators. The most popular Soviet actress in the USSR, Lyubov Orlova, became the country’s first sex symbol. 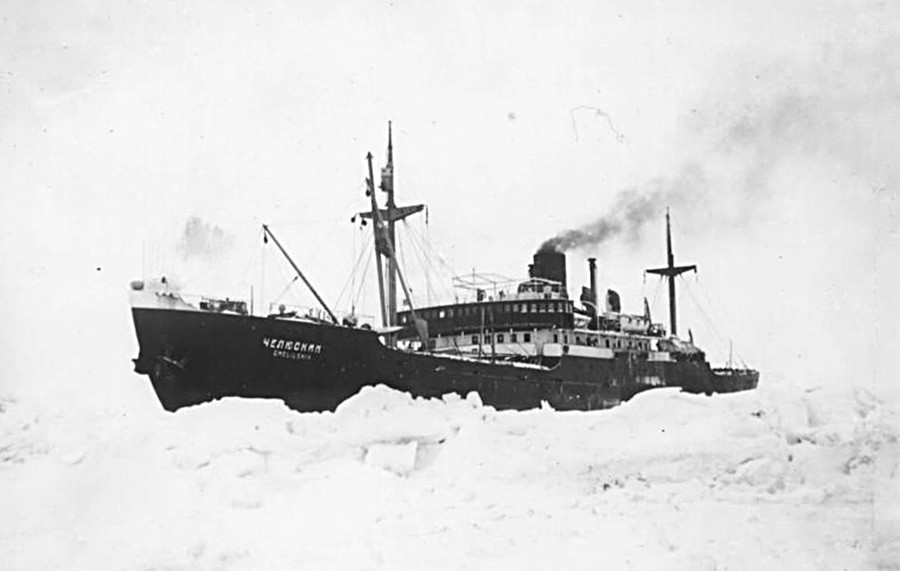 A view of the Chelyuskin icebreaker making its way through ice and snow. 1934.

On 13 February 1934, the steamship “Chelyuskin” sunk in the Arctic Ocean, and its 104 crew was stranded on an ice floe. Over the course of two months all of them were rescued, and their rescuers became the first Heroes of the Soviet Union. Millions of Soviet citizens followed and worried about the fate of the sailors. 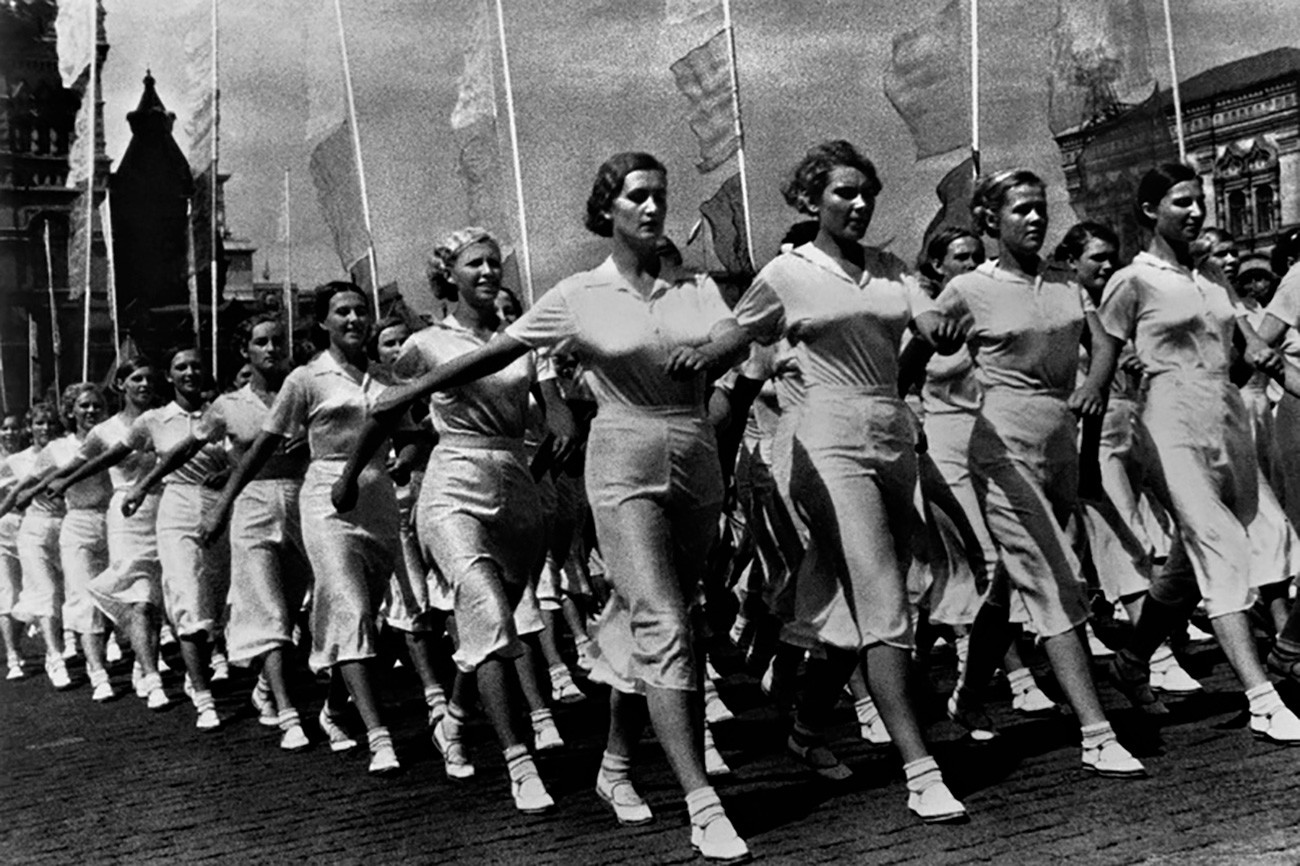 Introduced in 1919, the so-called Parades of Athletes were held on a regular basis from 1931. They became the most effective method to promote sport and a healthy lifestyle in the Soviet Union. These parades also played a significant role in the creation of a cult of personality around Stalin. The 1935 Parade of the Athletes named Stalin “the best friend of the Pioneers,” while at the 1936 parade a new slogan was born: “Thank you, comrade Stalin, for our happy childhood.” 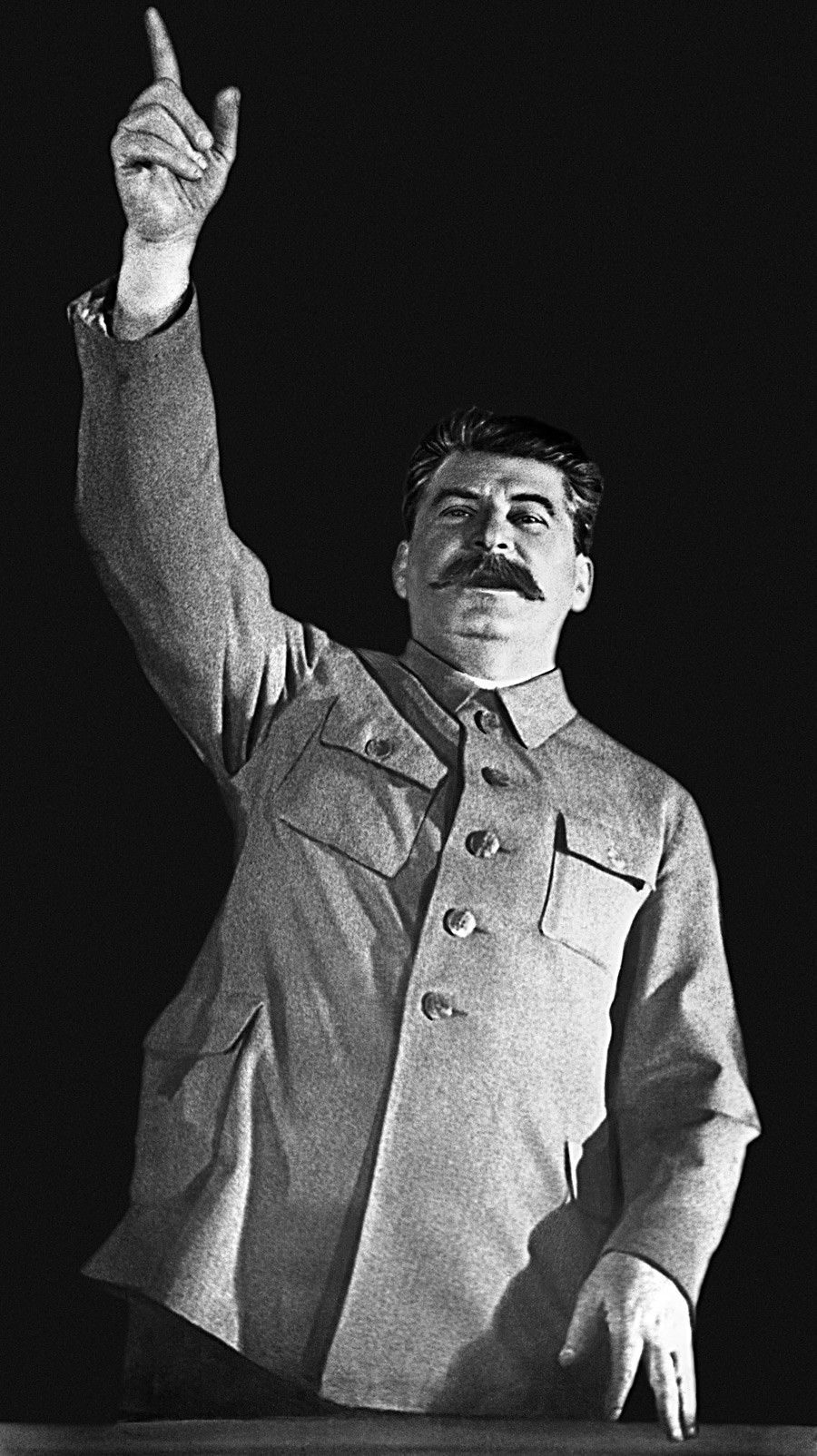 Joseph Stalin during a ceremonial meeting dedicated to the opening of the Moscow metro. 1935.

Soviet propaganda worked hard to turn Stalin into a demigod, an infallible ideal ruler, who never made any mistakes. “Great Leader,” “Great Leader and Teacher,” “Father of Nations,” “Great Warlord,” “Best Friend of scientists (writers, sportsmen etc)” were just some of his titles. 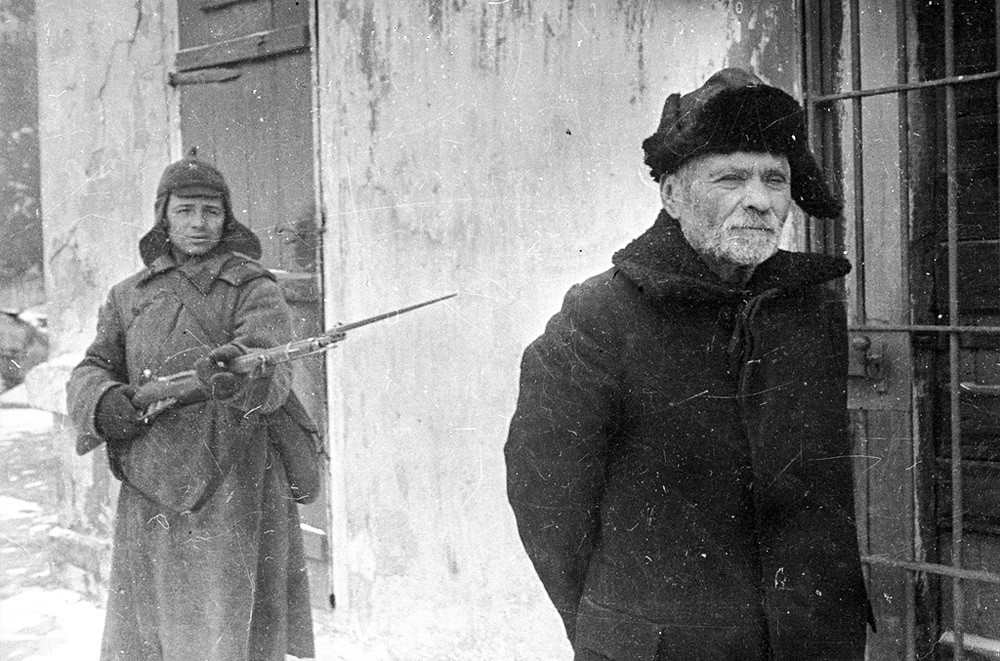 “The Great Purge” cost the lives of almost 700,000 people. Stalin’s repressions of 1936-1938 annihilated the core of the Communist party and government officials, beheaded the Red Army’s leadership, and decimated the intelligentsia and common people. 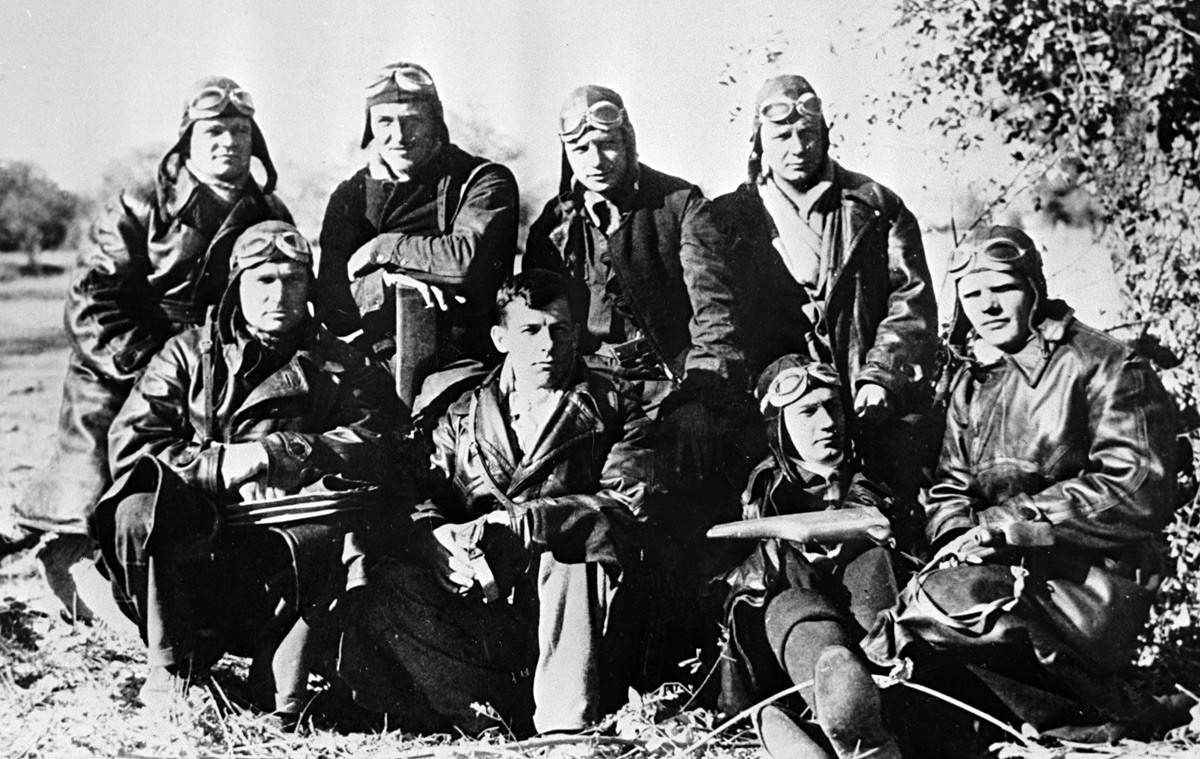 Soviet pilots on the Soto airfield near Madrid. 1936.

The Spanish Civil War was in fact a general rehearsal for WWII. Both the Soviet Union and Germany sent to the warring parties huge amounts of weapons, tanks, planes, guns and warships. Over 2,000 Soviet specialists, including 772 pilots and 351 tank commanders fought for the Republic against Franco’s Nationalists, which was supported by the German Legion Condor and Italian Corpo Truppe Volontarie. 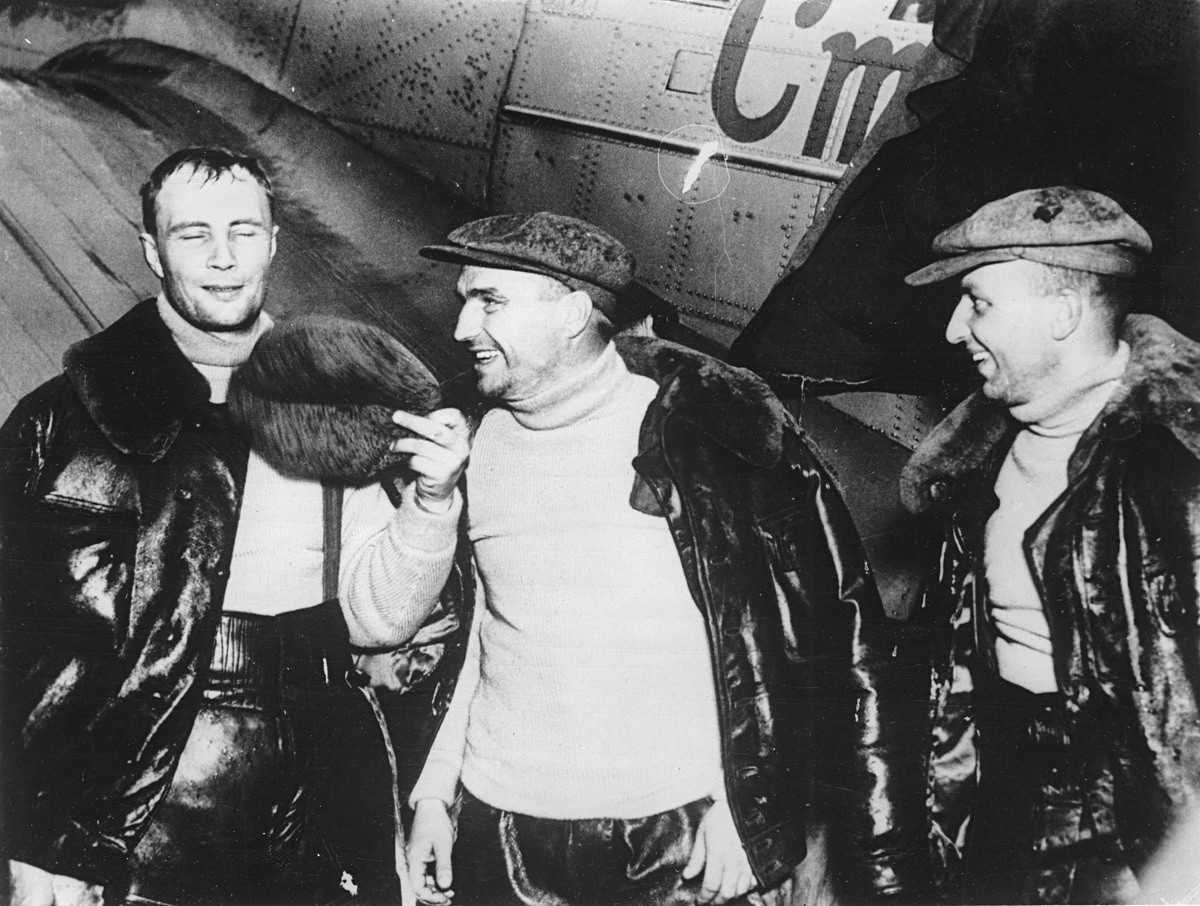 On 18-20 June, Soviet pilots in a Tupolev ANT-25 plane made the first ever non-stop flight from Moscow to Vancouver, Washington State, USA, via the North Pole. The flight took 63 hours and covered a distance of 8,811 kilometres (5,475 miles). 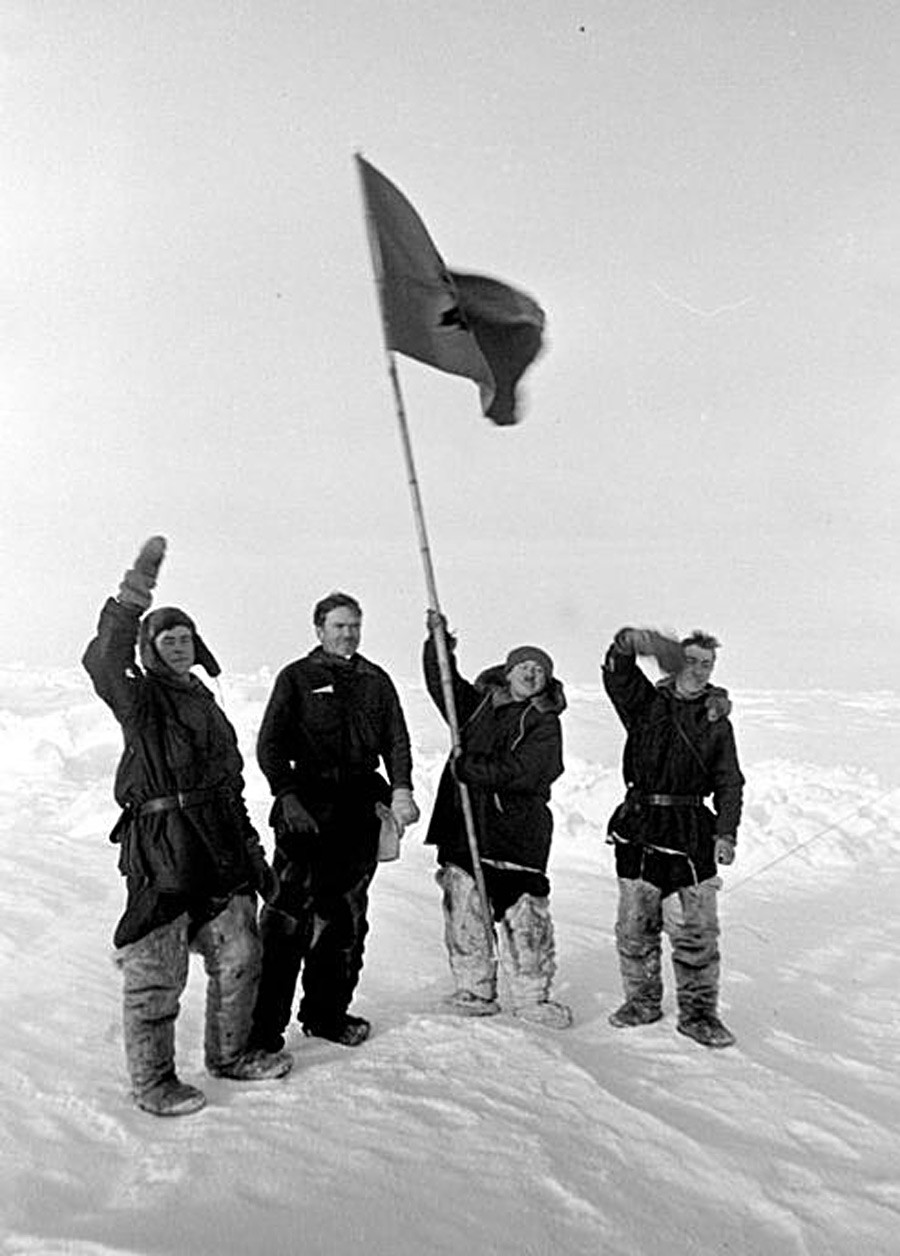 In the 1930s the Soviet Union notched up huge successes in Arctic exploration and its industrial use: Soviet pilots made their first non-stop flight via the North Pole, the “A. Sibiryakov” icebreaker made the first successful crossing of the Northern Sea Route in a single navigation without a break during winter. The Soviets founded dozens of Arctic ports and discovered numerous gas and oil sources in the region. In 1937 the world’s first manned drifting station in the Arctic Ocean, North Pole-1, was established. 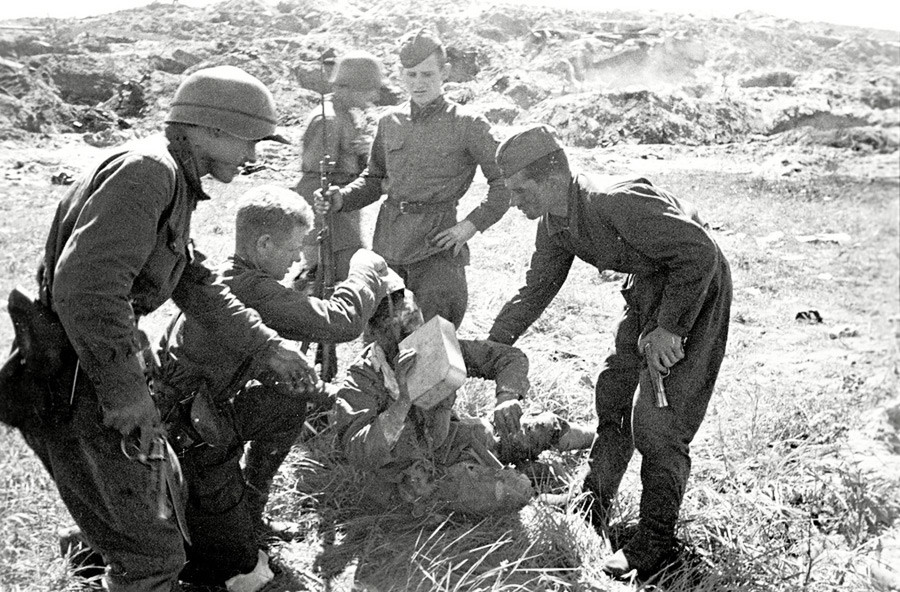 A Japanese soldier surrendering to Soviet troops during the Battles of Khalkhin Gol. 1939.

After the occupation of Manchuria in 1932, the Japanese Empire found itself with a long border with the Soviet Union and its ally Mongolia. Seeing the Soviet Far East as a zone of their future expansion interests, the Japanese started to test the forces of their future enemy. In series of battles at Lake Khasan and Khalkhin Gol in 1938-1939 a joint Soviet-Mongolian army completely crushed the Japanese army. The blow was so hard, that the Empire didn’t dare to attack the Soviets in June 1941 when the Nazis invaded the Soviet Union’s western borders, and changed its expansion vector in the Pacific. 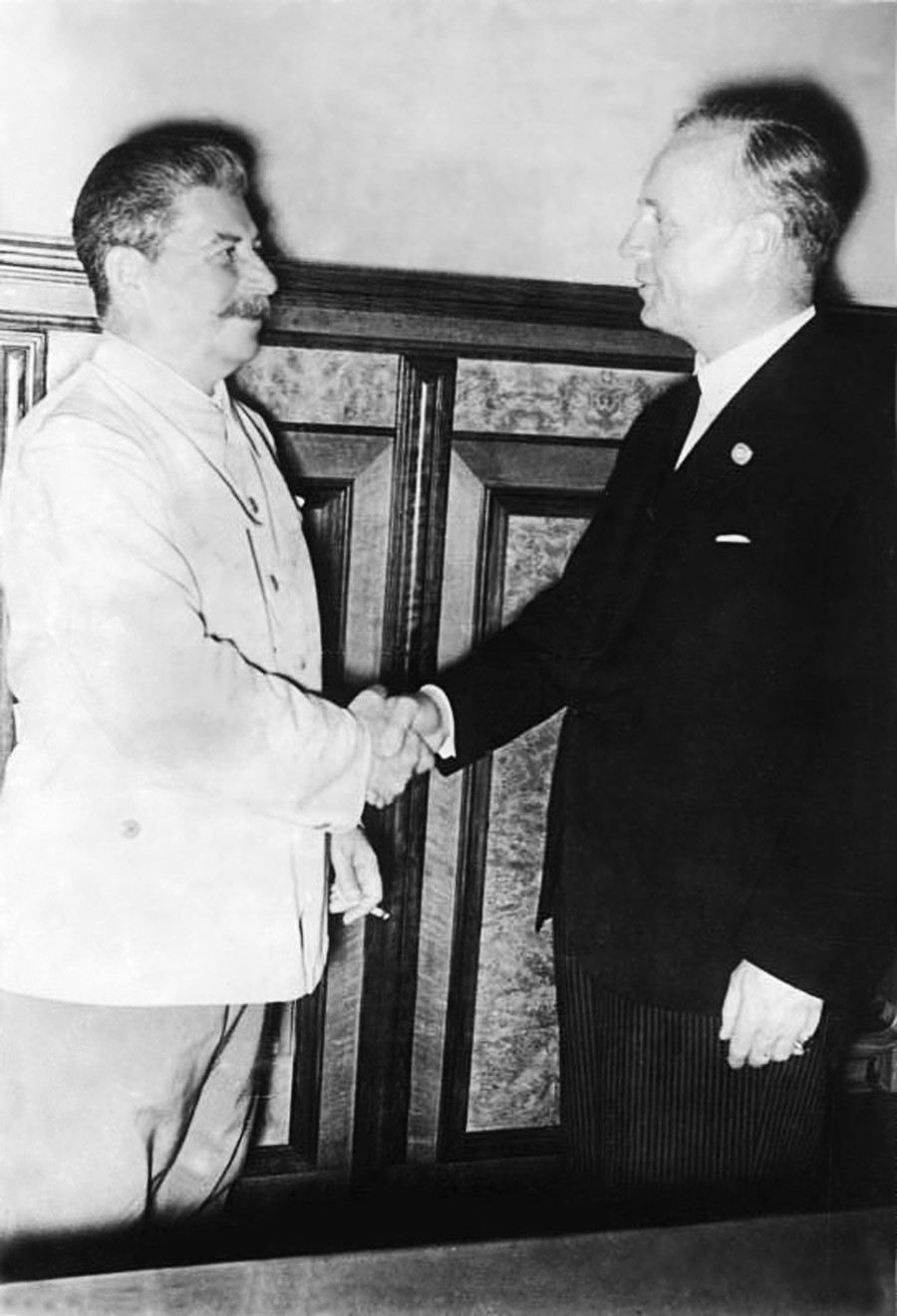 The Treaty of Non-aggression between Germany and the Union of Soviet Socialist Republics, widely known as the Molotov-Ribbentrop Pact, effectively freed Hitler’s hands, who now could deal with Poland and then switch to France without fear of being struck in the back by the Soviets and having to fight a war on two fronts. The Pact’s secret protocol determined the partition of Eastern Europe between the superpowers. According to it, Finland, Eastern Poland, a part of Romania and the Baltic states were to become Soviet areas of interest. 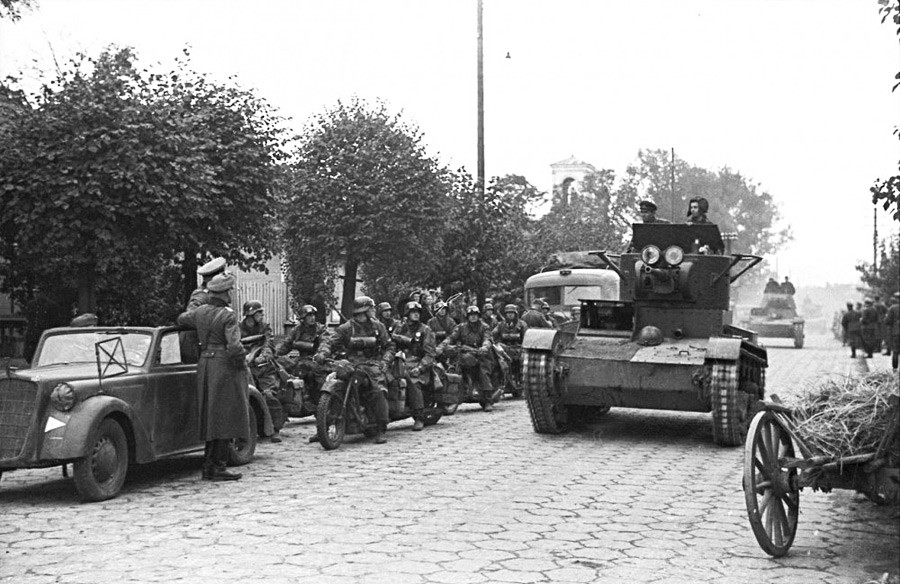 On 17 September 1939, the Red Army crossed the Soviet-Polish border and started its so-called “liberation campaign,” which aimed, according to the Soviets, “to liberate the peoples of the Western Ukraine and Western Byelorussia from the oppression of Polish lords and capitalists.” For the already beaten Polish army it was the final blow. Polish soldiers were ordered not to open fire on the advancing Soviet troops. As a result of the campaign, the Soviet Union annexed Eastern Poland (Western Ukraine and Western Byelorussia), and the Red Army and Wehrmacht held a joint military parade in Brest on 22 September.

17. Start of the Winter War 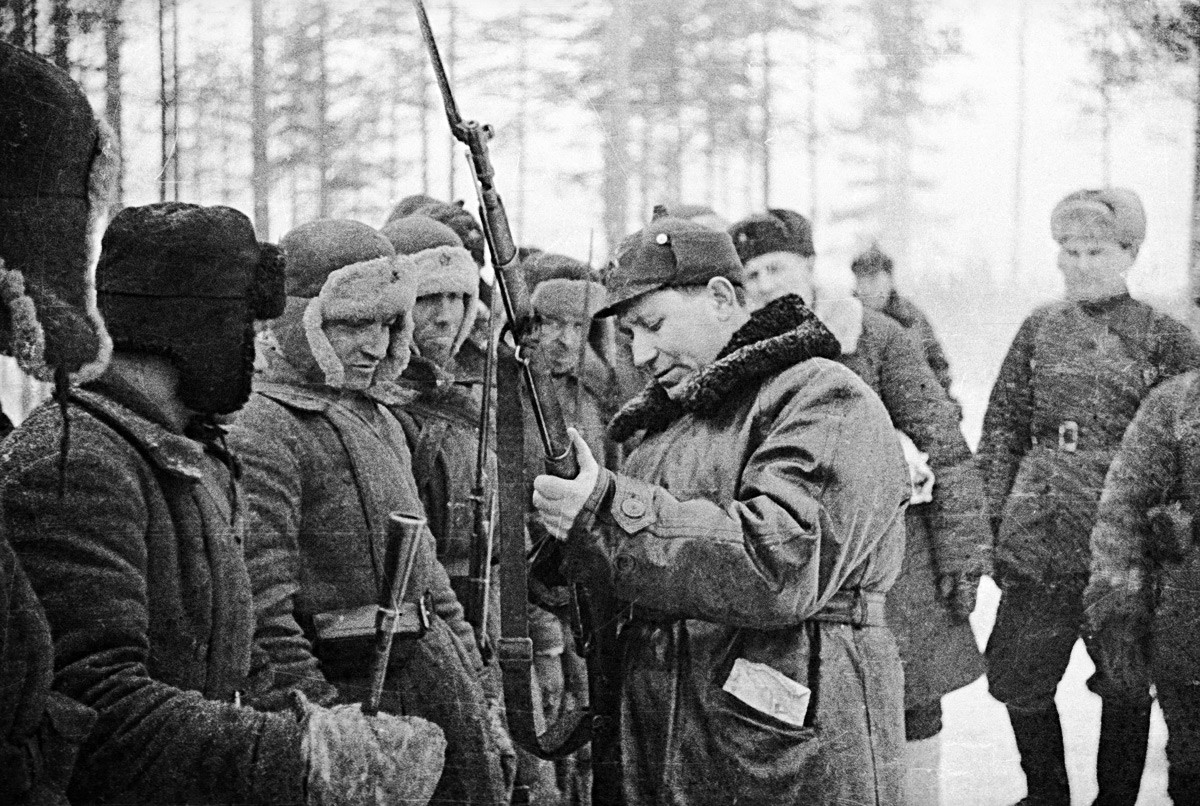 In autumn 1939 Moscow offered Helsinki to exchange Finland’s Karelian Isthmus and several islands in the Gulf of Finland for the much larger (but undeveloped) territories in Soviet Karelia. By doing this the Soviets wanted to secure Leningrad, which was too close to the Finnish border. After the Finns refused, the Red Army attacked on 30 November 1939. Stalin decided not only to take the territories by force, but to “sovietize” Finland and turn it into a Soviet republic. But the Soviets had bitten off more than they could chew: the Finns proved implacable opponents. The Soviet Blitzkrieg completely collapsed: the Mannerheim Line wasn’t breached, troops were surrounded and destroyed and casualties grew at a frightening rate.