Which countries dared to invade Russia? 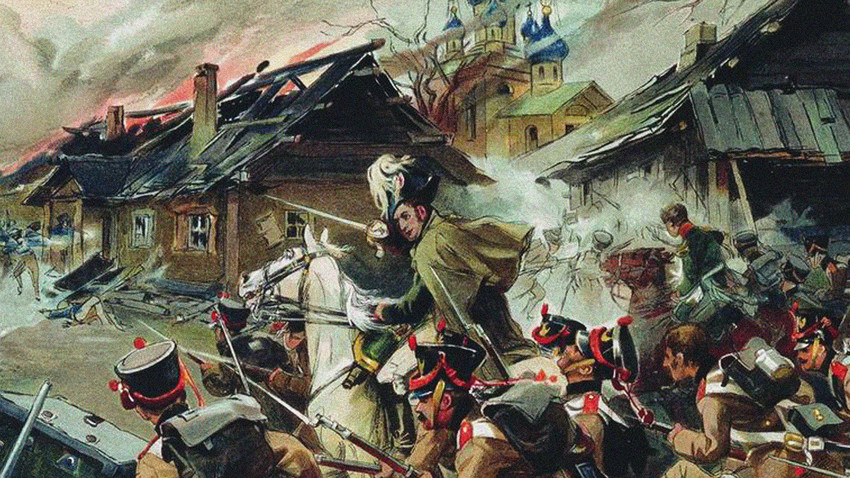 Getty Images
Believe it or not, Russia has been partly conquered several times in its history, but never defeated. 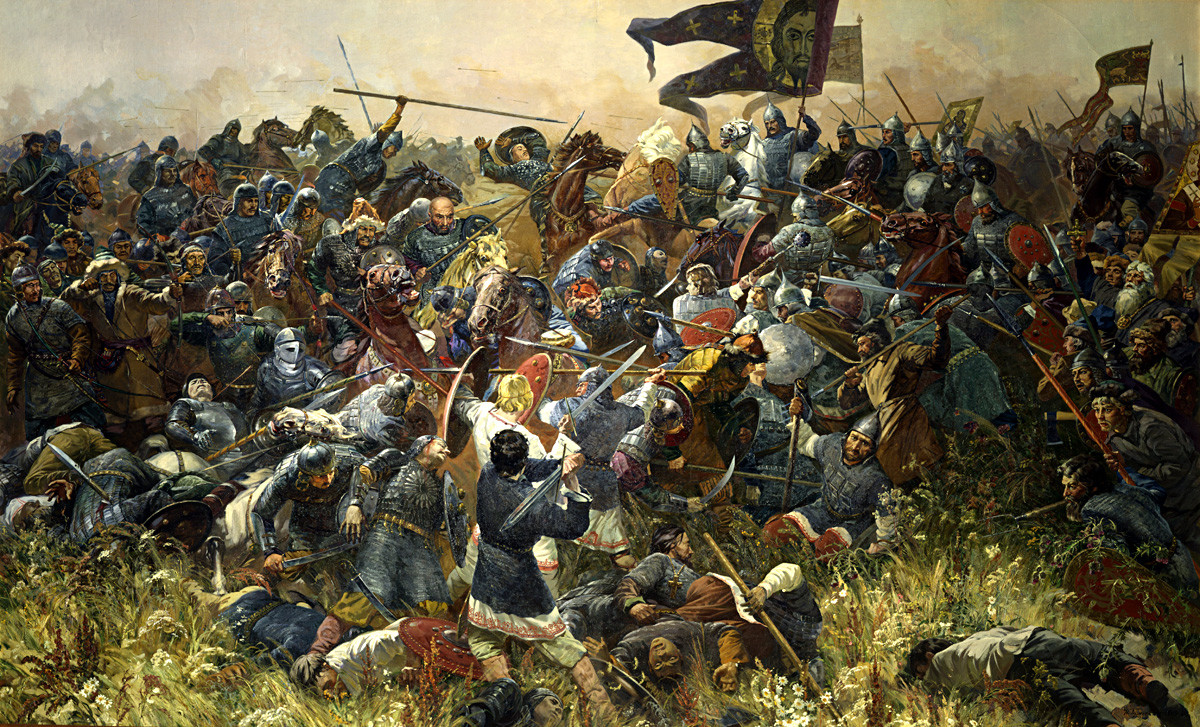 Sergey Prisekin, The Battle of Kulikovo, 1980

Originally, the state of the Golden Horde was a part of the Mongol Empire. In 1237, Batu Khan, the ruler of the Golden Horde, invaded the Kievan Rus, burning and looting its foremost cities Kiev, Vladimir, Ryazan’, Chernihiv, as well as others. At the time, the Mongol army greatly outnumbered the Russians.

After the invasion, the Mongols retreated to the steppe, because it wasn’t their aim to annex the Russian territories. Instead, the Mongols let the Russians decide for themselves which princes may rule in Russian cities – but in order to get permission, Russian princes had to travel to the Golden Horde to pay their respects and gain approval to rule. Also, the Russians were made to pay tribute to the Golden Horde, even after 1259, when it became a separate khanate from the Mongol Empire. This system of dependence was called the Tatar-Mongol Yoke.

The Yoke greatly affected Russian culture. Technology, literacy, and production all deteriorated greatly during the Yoke. However, in 1380, Prince Dmitry of Moscow famously defeated the Horde’s army in the Battle of Kulikovo, which began the long-awaited liberation of the Russian lands. The Yoke formally ended in 1480, when Ivan the Great of Moscow turned the Tatar armies back after the standoff on the Ugra river. Russian lands had become independent again. 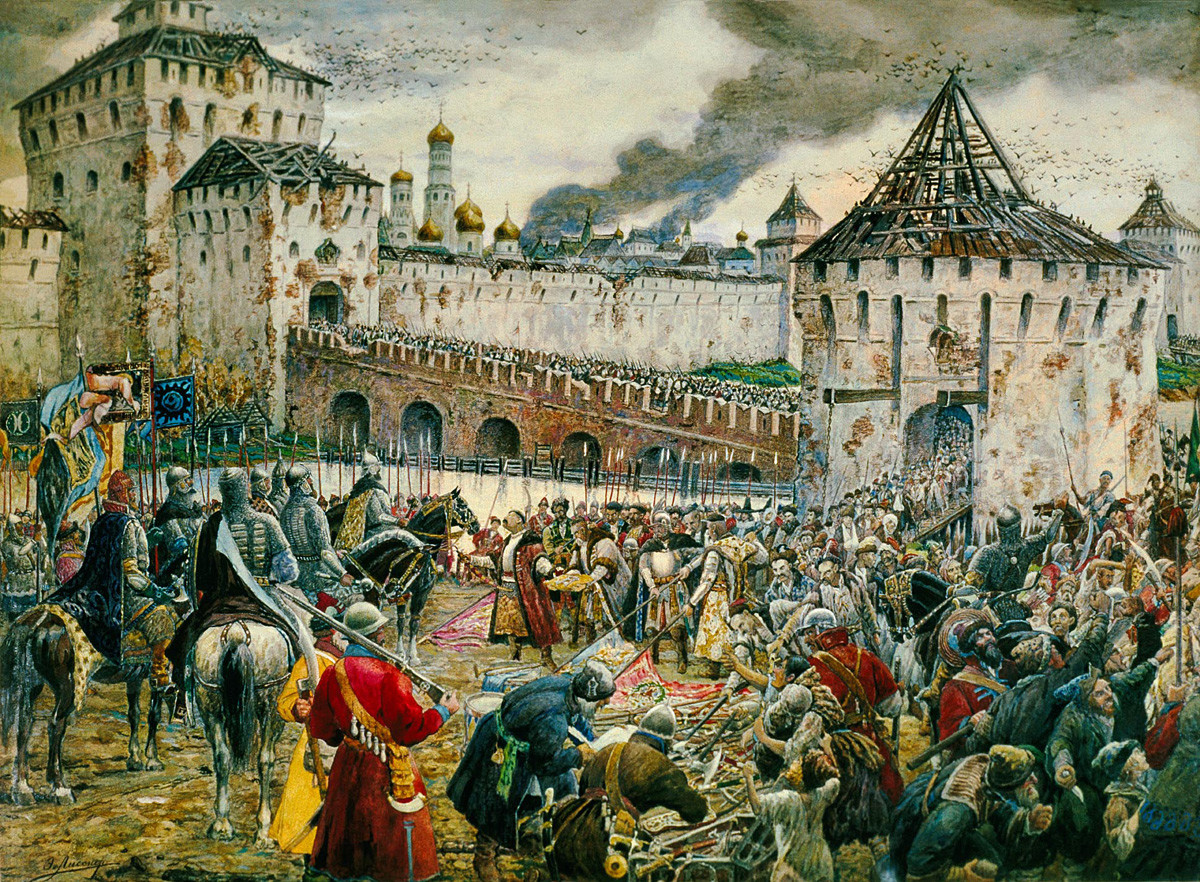 Parts of what would eventually become the Polish-Lithuanian Commonwealth had been waging war against Russian lands since the 15th century. And in 1569, the Commonwealth was formed between Polish and Lithuanian lands, making the resulting union much stronger.

READ MORE: Who are the two bronze guys on Red Square standing for Russian freedom?

After the Time of Troubles fell on Russia, the Commonwealth, together with Sweden, invaded the lands of the Muscovy Tsardom. In 1610, in the Battle of Klushino, the Polish army smashed the Russian forces. Soon, the self-organized government of the Seven Boyars invited Władysław IV Vasa to become the Russian ruler. For two years, Moscow was controlled by the Polish invaders, until in 1612, the Russian people’s home guard, led by Kuzma Minin and Prince Dmitry Pozharsky, liberated Moscow from the Polish invasion. Soon after, the Romanov dynasty was installed. 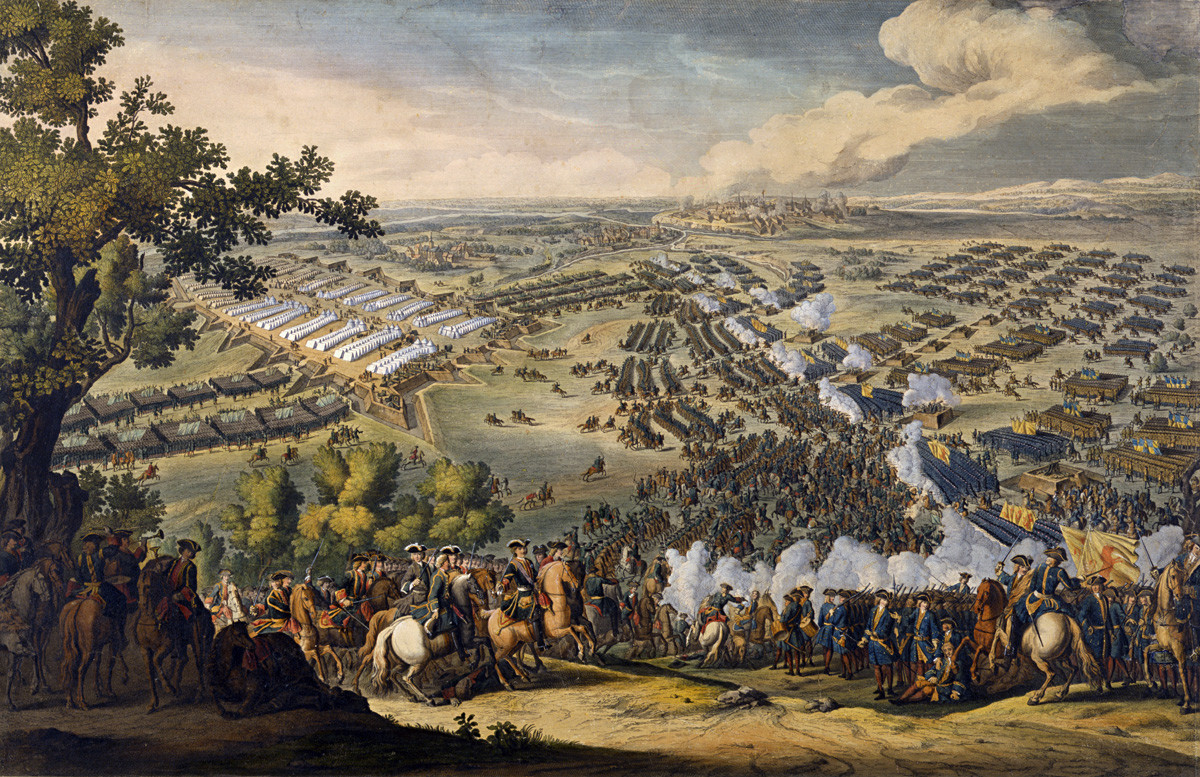 'The Battle of Poltava,' engraving by F. Simon after the original of D. Marten

Swedish armies briefly conquered Novgorod in 1611, but in 1617 were forced to give it back. However, due to the conditions of the 1617 peace treaty, Russia lost its access to the Baltic Sea.

Later, during the Great Northern War (1700 - 1721), the Swedish army invaded the then-Russian territories of Belarus, taking the city of Mogilev. While some Swedes tried to lay siege to Saint Petersburg in 1708 (but the town resisted), Charles XII of Sweden led an army to invade the territories around Smolensk, but ultimately couldn’t take the city, which had always been considered “the key to Moscow”. So Charles and his army headed south to Ukraine.

READ MORE: 5 facts about the war that turned Russia into a great power

In June 1709, near the town of Poltava, Peter the Great famously destroyed the Swedish army in an epic battle, and Charles XII fled to Turkey. 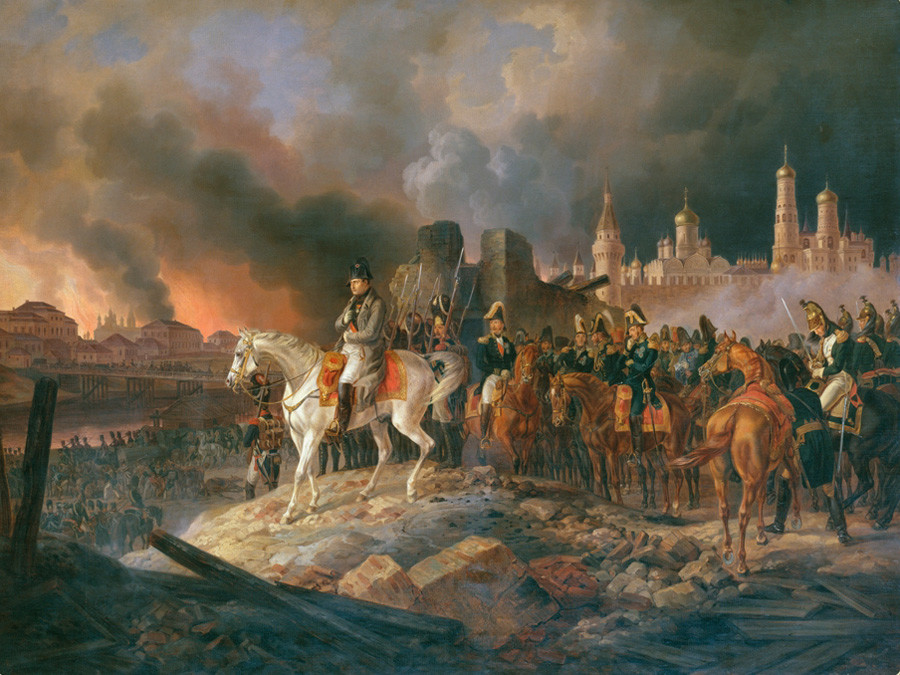 During the Russian campaign of 1812, over 600 thousand soldiers of the French army, led by Napoleon, invaded the Russian Empire by crossing the Neman river and attacking Riga. His forces then proceeded to Smolensk. The French pushed the Russian army back, burned down Smolensk and marched on to Moscow.

READ MORE: Why Napoleon failed to blow up the Kremlin

In the battle of Borodino near Moscow, both armies suffered severe losses, but Napoleon then took Moscow (for the last time in the city’s history). However, this led to nothing. Alexander I of Russia didn’t accept peace, especially not “at all costs”, as the desperate French emperor, deserted with his half-defeated army in a burned-down Moscow, was asking for.

READ MORE: Who else pillaged, burned and occupied Moscow besides Napoleon?

As the French army began to retreat, the Russian people launched a guerilla war which, together with the Russian army’s actions, smothered the French forces and then chased them back to Paris until complete defeat. 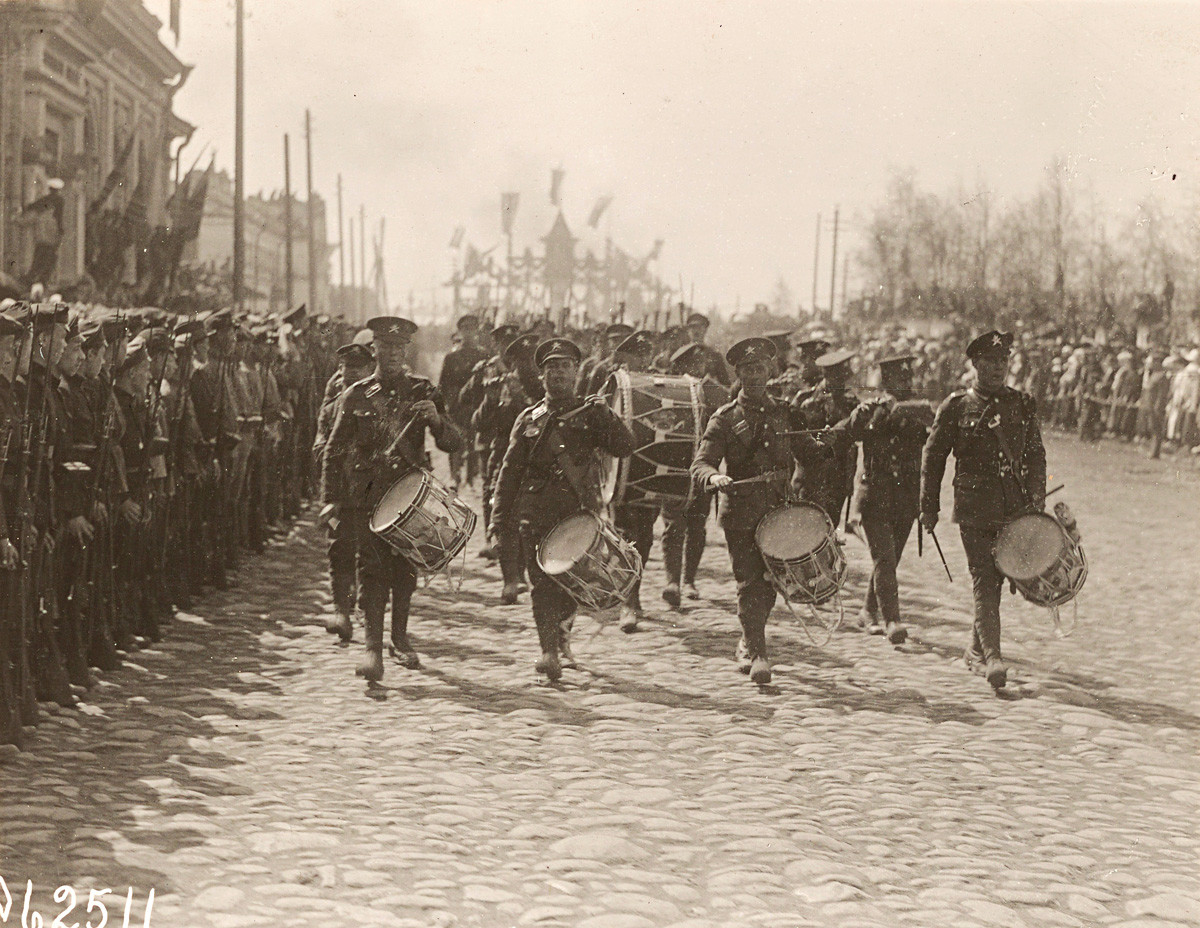 The British army in Arkhangelsk in 1918

This unprecedented intervention happened during the Civil War in Russia (1917-1921), while the Soviet state was still in its infancy. After the Brest treaty of March 1918, which ended Russia’s involvement in WWI, different states started military occupations of various Russian territories. Most notably, Germany had occupied parts of European Russia, Great Britain held Arkhangelsk, Murmansk, Sevastopol, and the Crimea; France and Greece partly controlled Odessa; Italy and Great Britain took part in the invasion of the Russian Far East, and Finland had occupied the territory of Karelia. In total, 14 different states had occupied Russia during this period.

But by 1919, due to both military and diplomatic actions by the Bolshevik government, most of the foreign forces had left the Russian territories. 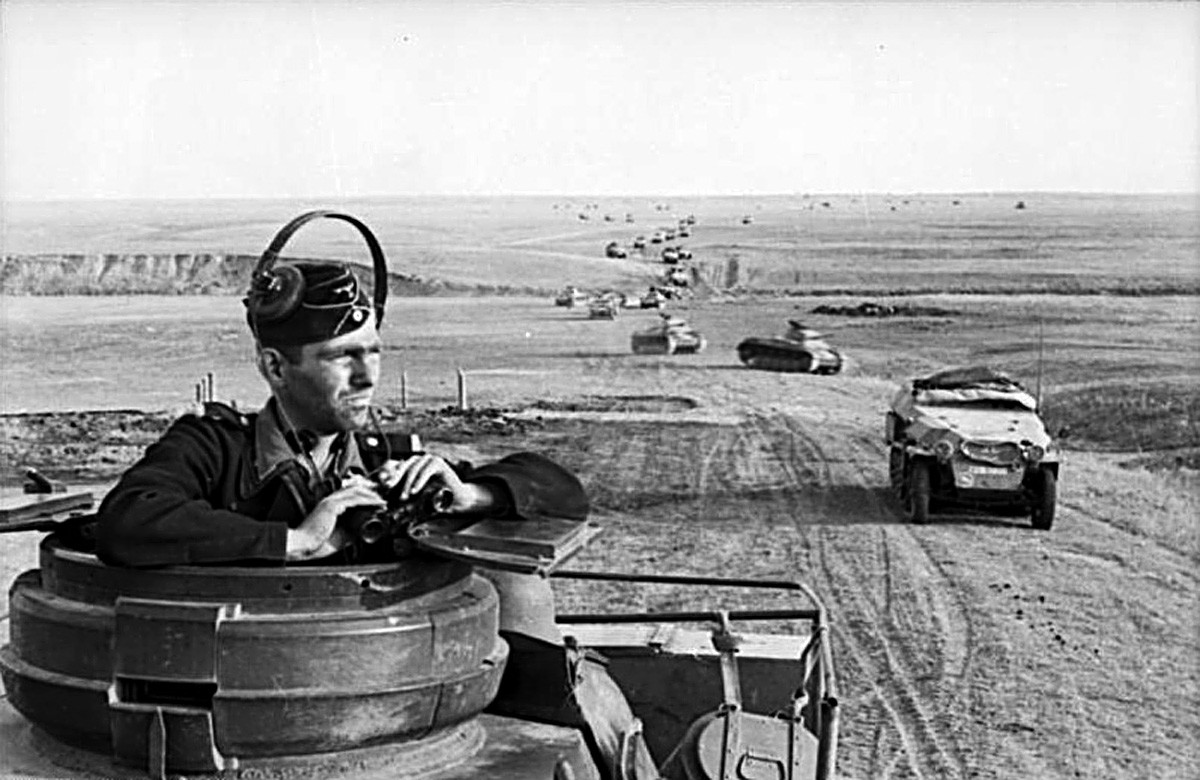 Nazi Germany’s onslaught on Russia during World War II was the biggest and the deadliest military operation in the history of mankind.

The Germans had started their attack in various directions, occupying Ukraine (then USSR’s territory), sieged Leningrad (now St. Petersburg), took Kursk in the south and Arkhangelsk in the north and Voronezh. The invasion stretched over most of European Russia’s territory, reaching Stalingrad (now Volgograd) in the south, but after the devastating battle of Stalingrad, Hitler’s army was pushed back to Kursk and forced to retreat back to Germany, where they were finally defeated.

Just as the Russian Empire took the French capital in 1812 to ensure victory, the USSR, too, had taken Berlin in 1945, crushing the monstrous Nazi regime with the help of the World War II allies.