Why Napoleon failed to blow up the Kremlin

Getty Images
The Russian army and common folk weren’t the only obstacles to Napoleon’s barbarous plans to destroy the Kremlin in his hated Moscow. Mother Nature also lent a hand.

Moscow was very different to other European cities that crumbled before the military genius of Napoleon. Here, no crowds of locals came to gawp at the marching columns of the Grande Armée, and no local officials rushed to present him with the keys to the city.

Instead, the French emperor was met by an empty, deserted, hostile city, which, to compound his misery, was soon totally engulfed in flames. Observing the glow of the Moscow fires, the dumbfounded Napoleon is said to have remarked: “What a terrible sight! They’re burning the city themselves… What resoluteness! What people! They are Scythians!” 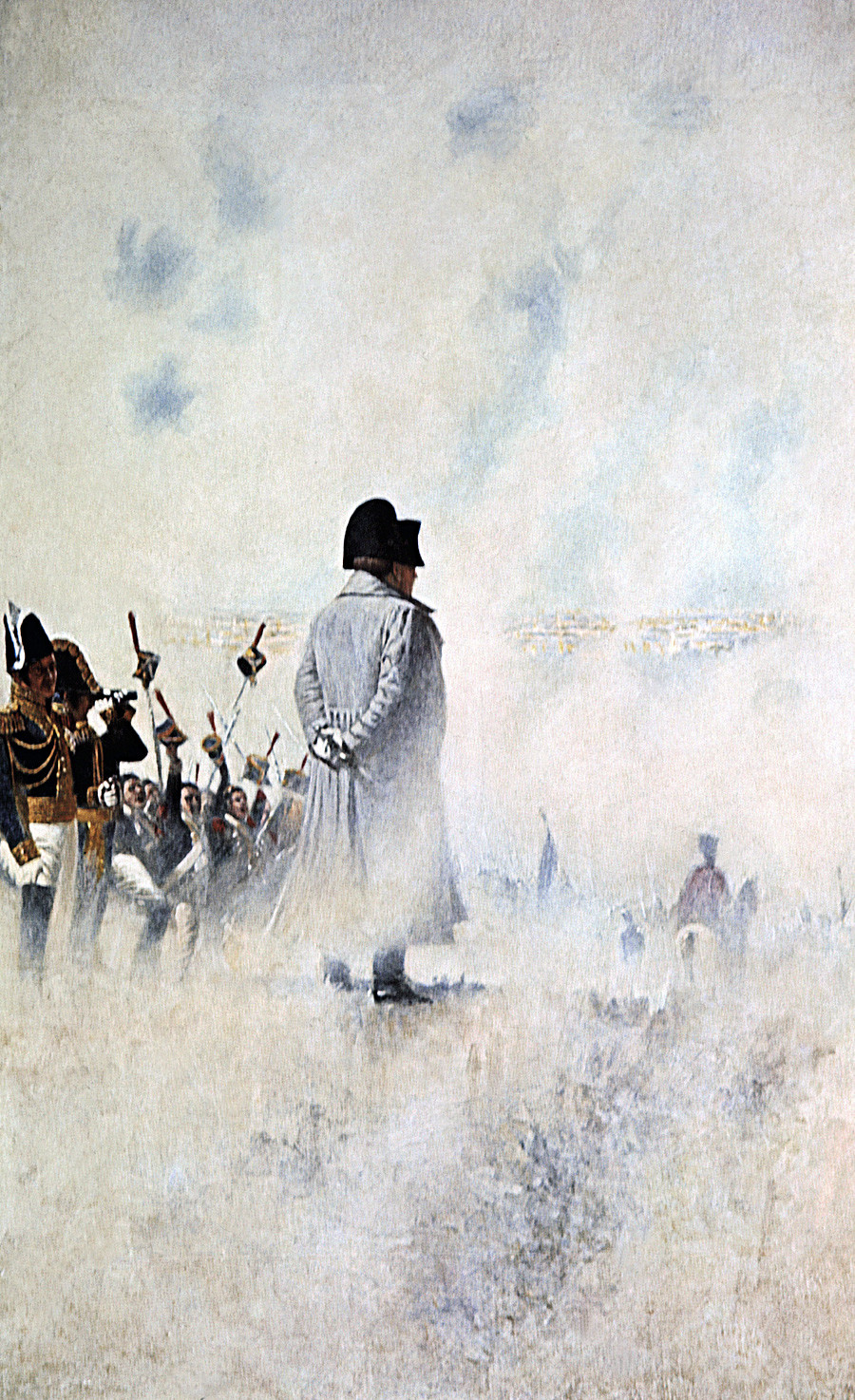 Vasily Vereshchagin. Napoleon Near Moscow, Waiting for a Boyar Deputation

The French occupation of Moscow lasted just under two months. The situation for Napoleon was dire and getting worse. His Grande Armée was turning into a decadent gang of marauders and robbers, the severe winter cold was approaching, and far from suing for peace, the reinforced Russians had just defeated French Marshal Joachim Murat’s troops to the south-west of Moscow.

Deaf to the appeals of his top-ranking officers to see out winter in the city, Napoleon took the decision to leave Moscow and retreat westwards.

But the French emperor could not leave the despised city without a parting gift for the “hospitality” he had received. Moreover, he had a score to settle with Russian Emperor Alexander I, who had refused to negotiate with him. 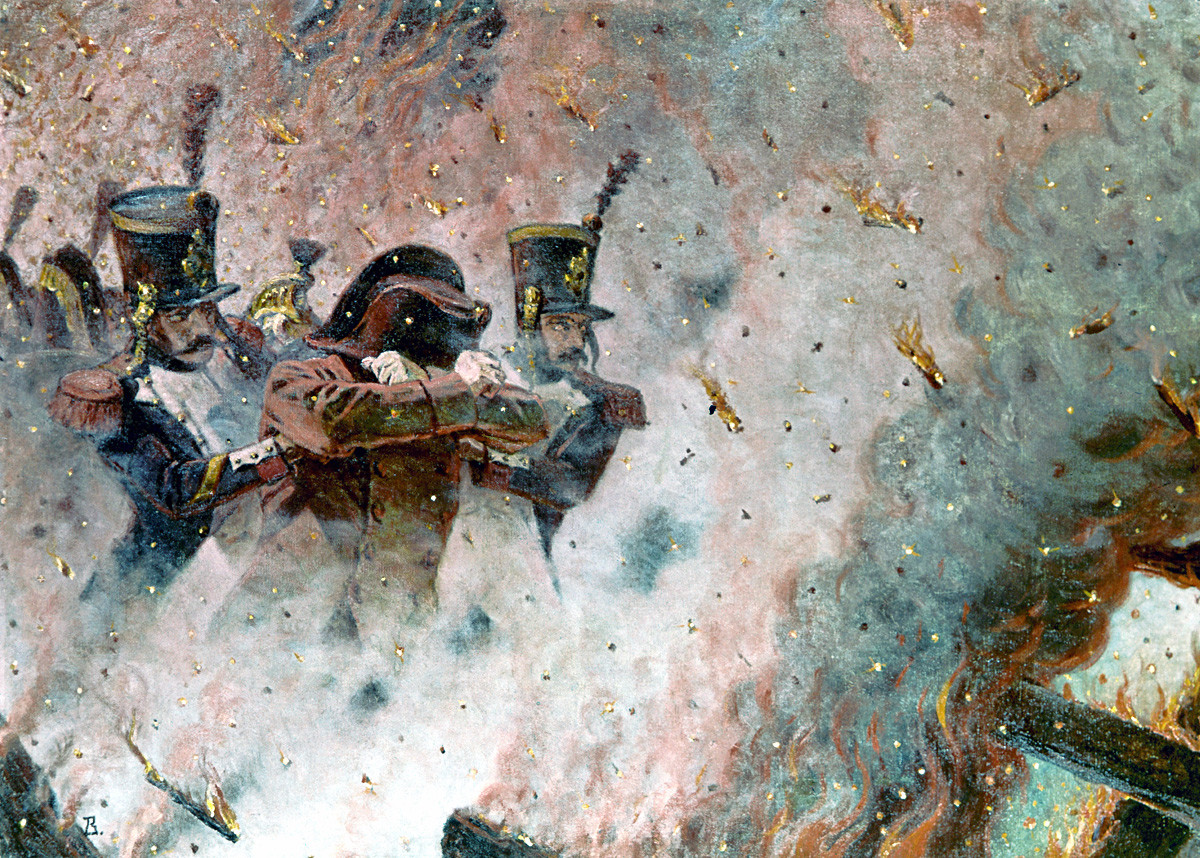 Vasily Vereshchagin. Through the Fire

In the end, the decision was taken to strike at the very heart of Moscow, and indeed of Russia: the Kremlin. “I have abandoned Moscow and ordered that the Kremlin be blown up,” Napoleon wrote to his wife.

And so the Grande Armée rode out of Moscow. Only the wounded remained, plus a detachment of 8,000 men under the command of Marshal Édouard Mortier, who had been entrusted with the order to blow up the Kremlin and set fire to its palace and all public buildings.

Over the course of three days, the French forced local Muscovites to dig trenches around the Kremlin and lay mines. One such worker recalled: “Our hands did not want to comply. Let everyone perish, but at least not by our own hand. It was against our will. No matter how bitter it felt, dig we must. The wretched enemy stood there, and if they saw one of us not digging properly, they beat him with their rifle butts. My back is all smashed up.” 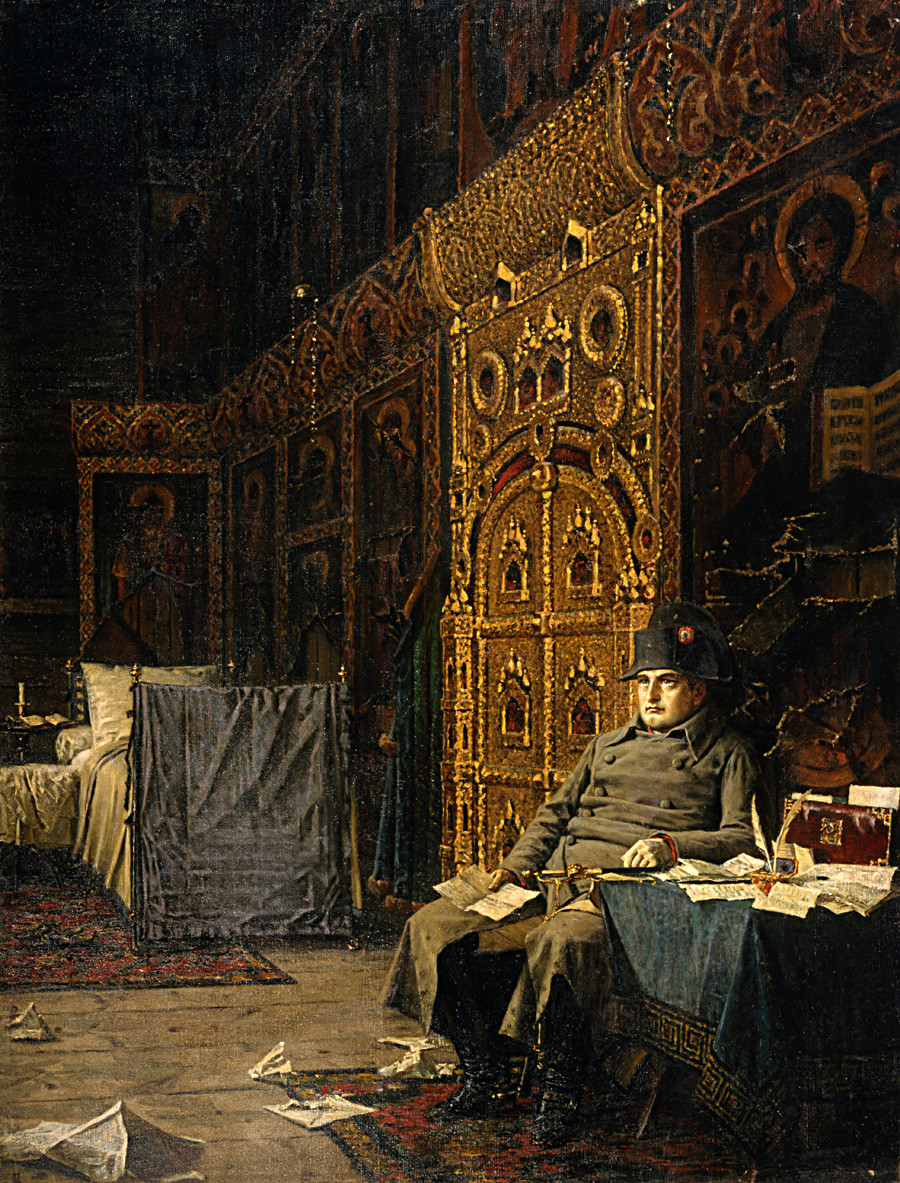 Vasily Vereschagin. At the Stage. Bad News from France

Muscovites unable to bear the destruction of their city fled from Moscow and reported the barbaric plans to a detachment of Russian troops under General Ferdinand von Wintzingerode, stationed in a village near Moscow.

Outraged, Wintzingerode said: “No, Bonaparte shall not blow up Moscow. I will make it clear that if just one church is detonated, then all French captives here will be hanged.”

However, having gone to see Mortier as a truce envoy, he was captured and only by miracle escaped execution.

As soon as the last French soldiers had left the city, the planted mines began to explode. “Everywhere the wild screams, shrieks, and groans of people crushed by falling buildings could be heard. There were cries for help, but no one to assist. The Kremlin was lit up by an ominous flame. Explosion followed explosion, the earth shook without end. It felt like the last day of the world,” eyewitnesses recalled. 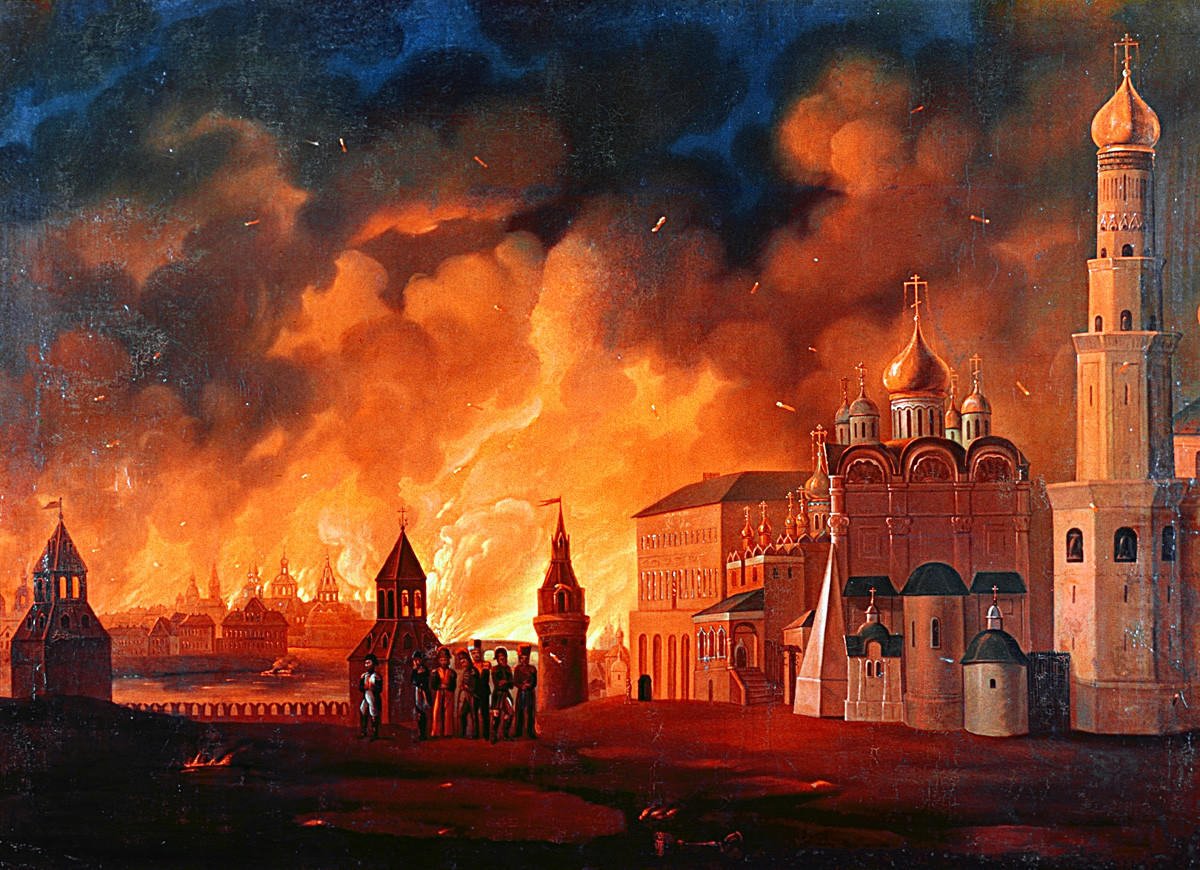 Painting by A. F. Smirnov

As a result of the explosions, Vodovzvodnaya Tower was destroyed, the Nikolskaya, First Unnamed, and Petrovskaya towers were damaged, and a section of the Kremlin wall and part of the Arsenal also suffered. Miraculously, the tallest building in Moscow — the Ivan the Great Bell Tower — survived. It remained intact, unlike its later extensions.

The consequences could have been far worse, but it seemed that nature itself disapproved of Napoleon’s barbarous intent (as did the French officers). Heavy, incessant autumnal rain extinguished most of the fuses before the mines could explode.

Local residents also hurried to put out the fuses, likewise the vanguard cavalry of the Russian army under the command of Alexander von Benkendorf when it entered the city. 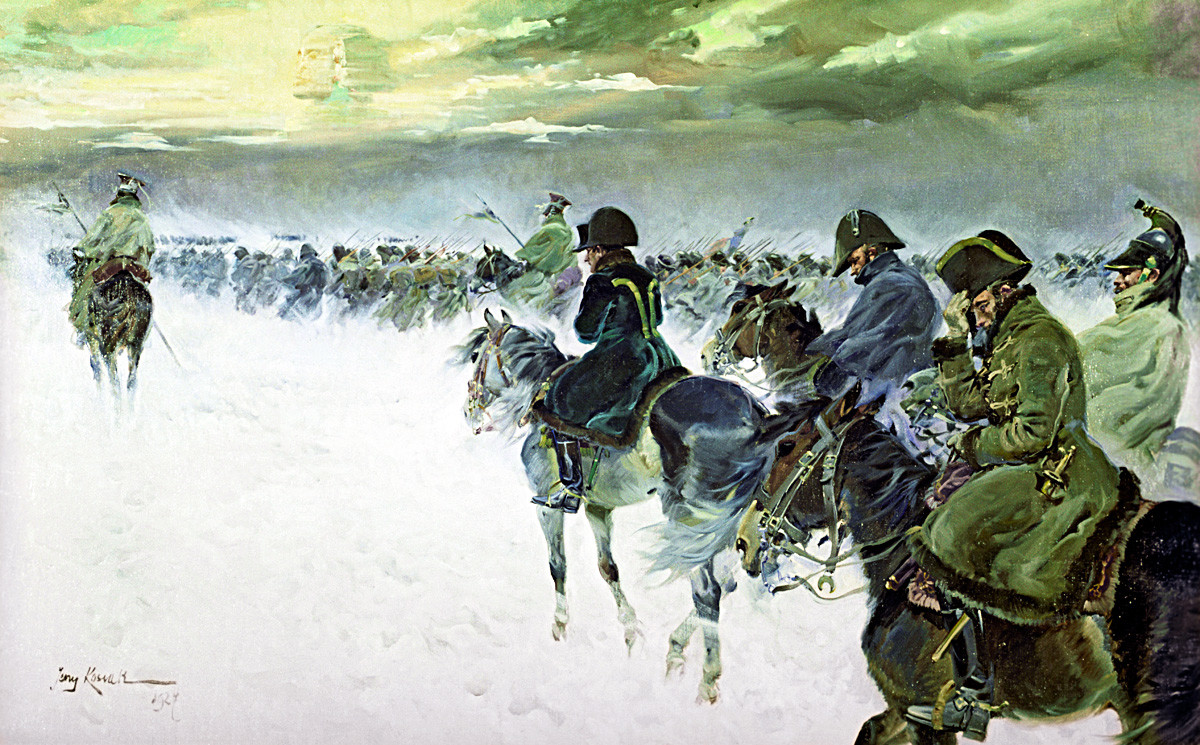 Napoleon’s dastardly scheme had come to nought. And before the once grande, now ragtag French army had even managed to cross the western frontier of the vast Russian Empire on its forlorn retreat, Muscovites were busy restoring their city, erasing all traces of the enemy incursion.