Surprised by Russia: 5 things that bewildered Napoleon in 1812 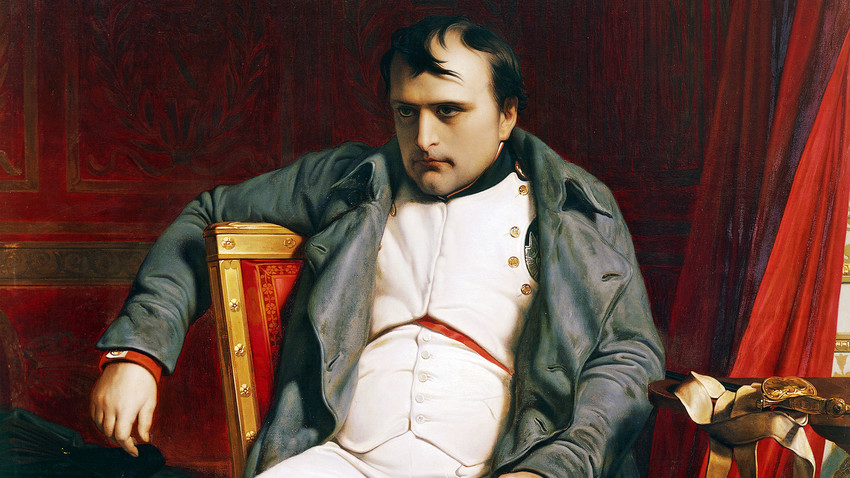 Portrait of Napoleon at Fontainebleau, March 31, 1814, by Paul Delaroche

Getty Images
Having established control over almost all of Europe, Napoleon felt the Russian Empire threatened his plans for domination, and so he set about trying to put the country on its knees. In 1812, the French dictator invaded Russia, which in the end proved to be his fatal mistake. Russia turned out to be far too unpredictable even for the French military and political genius.

The unorthodox behavior of Russian troops was the first unpleasant surprise to greet Napoleon. Hoping to secure a quick victory, the French emperor gathered his enormous and multinational Grand and entered into Russia without facing any resistance. Later, when in exile on the island of Saint Helena, Napoleon recalled that he had “ army more numerous than any that has ever fought in Europe… Strengthened by troops from Prussia, Austria the Rhine Confederation, I had under my command up to 480,000 soldiers…”

Since it was very difficult to supply such a vast army for a long period of time, Napoleon hoped that a traditional field battle would take place soon after crossing the border, somewhere on the territory of present-day Lithuania.

Something very unexpected happened, however. While the Russian army (around 240,000 soldiers) furiously resisted the French invaders, they eluded a general battle, each time retreating after conducting furtive hit-and-run attacks. Napoleon described the overarching French sentiment when in mid-August, after a ferocious battle, he entered the city of Smolensk (240 miles west of Moscow).

“The entire army thought it would be the end of our campaign… My regiments were amazed that after so many hard and deadly marches [two months after the invasion], the results of their endeavors constantly were further away, and they started to worry about the distance separating them from France,” wrote Napoleon in exile.

In the end, the French ruler got his major field battle: the two armies met at the village of Borodino, not far from Moscow. Despite the fact that Russian troops retreated the night after the battle, Napoleon did not accomplish his strategic goal. The Russian army was still intact. On the contrary, his army had suffered a terrible beating and needed time to recover. He hoped that French troops would be able to do that in Moscow, which they entered a week later. 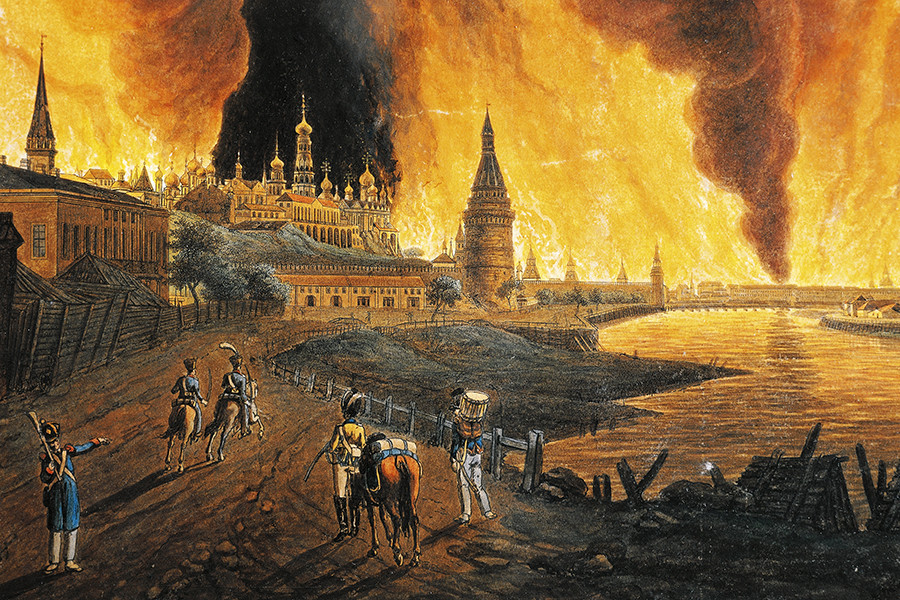 “This fire demolished everything," Napoleon said

Once again, however, Napoleon’s plan was foiled by a raging fire that devastated the ancient Russian capital, and which had been set by Muscovites themselves. “This fire demolished everything. I was ready for everything but not this. Who could think that people would burn their own capital? If not for that fateful fire, I would have had everything for the army. Next year, either [Russian emperor] Alexander would conclude peace, or I would be in St. Petersburg,” Napoleon told a British doctor during his exile. Back then in Moscow, Napoleon reportedly exclaimed, “What a terrible sight! They're burning it themselves… What resolution! What people! These are Scythians!”

Napoleon later complained about the untimely and ferocious frost that he had experienced in Russia. “I was wrong just by a few days. I studied the Russian weather going back 50 years… The frosts always started 20 days later [than in 1812]. When we were in Moscow it was minus 3 degrees [Celsius] and the French took it well. But on the road [during the retreat] it was minus 18 and almost all our horses died. … The soldiers became demoralized… They scattered about and fell victim to the enemy. Others just laid down, fell asleep and died,” later lamented the deposed emperor. 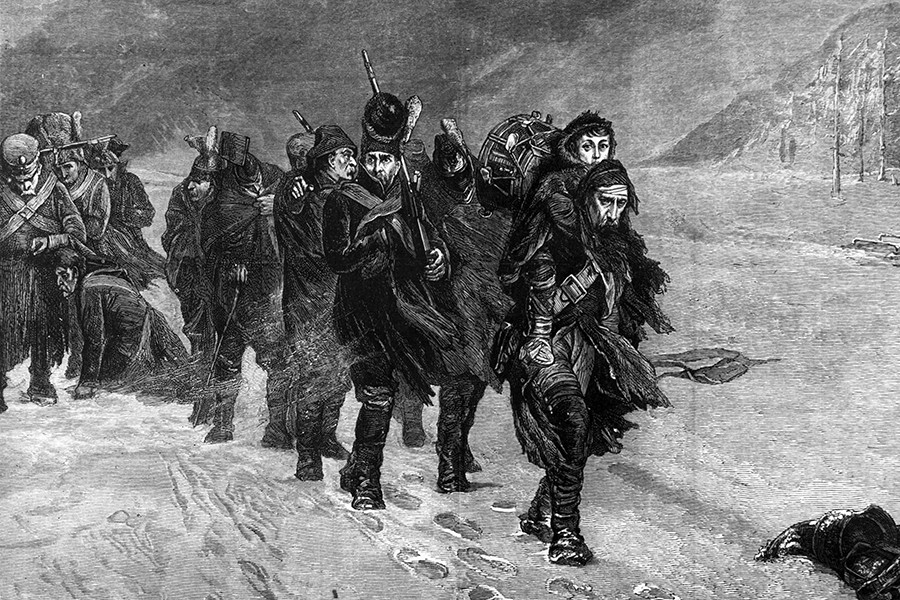 On The March From Moscow by Laslett John Pott

He credited the harsh weather conditions as a leading factor in his army’s destruction.

Despite his humiliating defeat, Napoleon appreciated the beauty of Russian cities. “The view of Smolensk, which is situated in the form of an amphitheater on the banks of the Dnepr River, makes a beautiful picture,” wrote the French emperor about the place close to which, according to some experts, he had treasures stolen in Moscow. 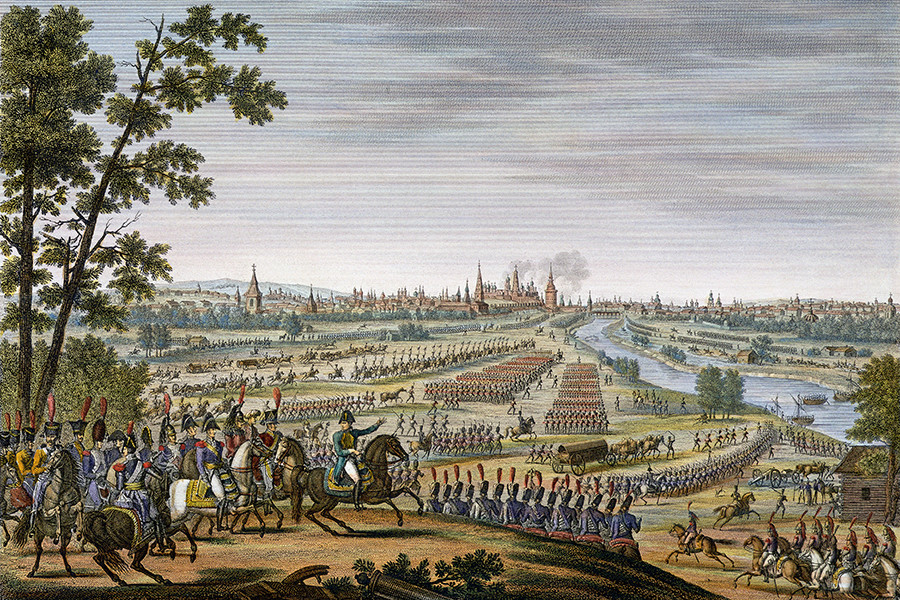 The entry of the French into Moscow, 14th September 1812 by Edme Bovinet

His comments on the ancient Russian capital were even more flattering: “Built like Rome on seven hills, Moscow looks picturesque. One should see the view of this city, semi-Eastern and semi-European, with its 200 churches and a thousand domes of different colors that soar above, to experience the feeling that we had when we looked at it from the height of Poklonnaya Gora.”

Napoleon was deeply struck by the massive popular resistance to his invasion, as already seen by his reaction to the Moscow fire. “The most menacing army cannot successfully wage war against a whole nation that decided to win or die. We did not deal with the Lithuanians, indifferent viewers of events unfolding around them. All the people who were ethnic Russians left their houses when we advanced. On our way, we only encountered deserted or burnt settlements whose dwellers united in gangs that acted against our foragers.”