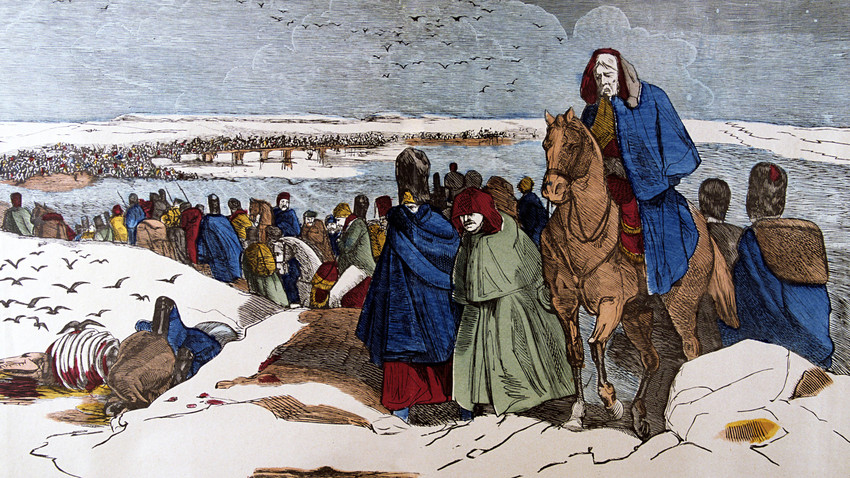 Napoleon's Grande Armee retreating from Russia across the Beresina, 26-28 November 1812

Global Look Press
Rumors abound that during its epically unsuccessful invasion of Russia in 1812, Napoleon’s army looted some 80 tons of gold, among other riches, from Moscow. But none of it ever left Russia.

“One could have thought that there was some sort of a caravan ... or an ancient army coming back after a huge raid with captives and booty.” That's is how Phillippe Ségur, a member of Napoleon’s personal staff and later a historian, described the dozens of horse-drawn carts laden with what French forces had plundered in Moscow.

The fate of those trophies is still unknown, although there is a reason to believe they remained in Russia. The explorer and treasure-hunter Vladimir Poryvayev claims there exists a list of treasures that Napoleon’s troops took from Moscow. “The items mentioned there weren’t sold at auctions and didn’t appear in private collections,“ he said (the article is in Russian). “There were not only precious stones, jewelry, but also pieces of art from repositories of the Moscow Kremlin and from Moscow churches.”

Those 200 or so carts also contained items stolen by the French invaders from as many as 15,000 residences, according to historian Alexander Seregin. “The most disgusting thing, though, was what they did in churches and monasteries,” he said. “They took away icons, carved out jewelry. … They melted it, as in every church there was a smelting furnace. Precious metals were melted into ingots and stamped with the letter “N”. All this was taking place for a month. This appalled Napoleon himself and he issued an order demanding an end to the looting.” 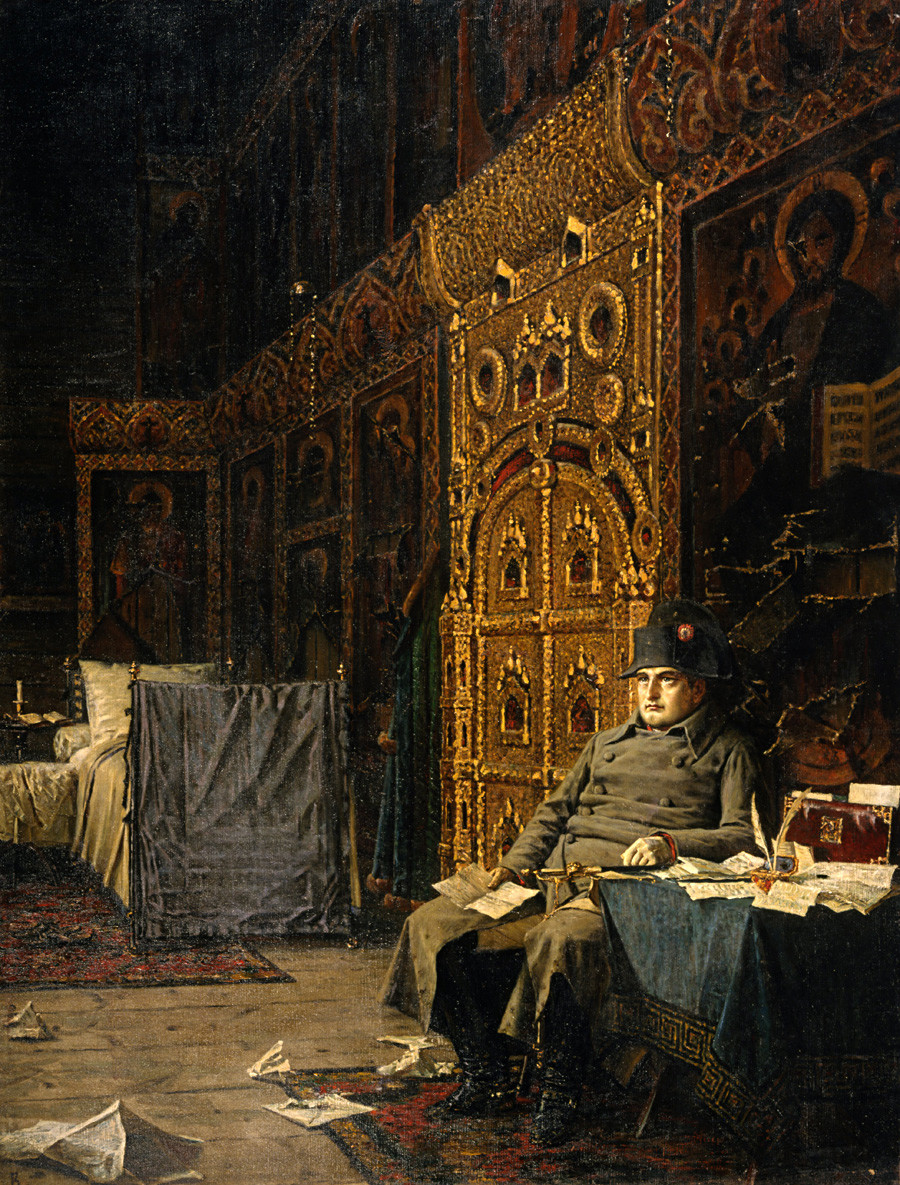 'On the way. Bad News from France' by Vasily Vereshchagin. Subdued Napoleon reading correspondence in a Russian Orthodox church

The stolen items are said to include a gold cross from the Kremlin’s Ivan the Great Bell Tower, then the tallest edifice in Moscow. According to some accounts, Napoleon wanted to place the cross atop Paris’ National Residence of the Invalids, where he planned to create a museum of conquered nations.

Weighed down by stolen riches

A popular theory holds that Napoleon hid the pilfered treasure during his retreat from Moscow in the autumn of 1812. Although the French emperor had managed to take the former capital, he couldn’t defeat the Russian forces and had to return and exit hastily under constant attacks. Somewhere on his way out, the booty-filled carts — including the 80 tons of gold — proved too much of a burden and Napoleon ordered that the contents be hidden.

According to Ségur, the French threw them in Lake Semlevskoe near Vyazma, 300 kilometers west of Moscow. Napoleon is believed to have stopped at the nearby village of Semlevo while fleeing Russia’s forces, according to Ségur and affirmed by Scottish writer Walter Scott in his 1827 biography, “The Life of Napoleon Bonaparte, Emperor of the French.”

Deep mysteries of the lake

Just after the French-Russian war, ammunition and armaments were discovered in areas near Lake Semlevskoe; the search for gold began in the 1830s, a few years after Scott’s book was published. In 1836, Smolensk Governor Nikolai Khmelnitsky invested in an underwater exploration of the lake, to no avail. An effort in the early 20th century by archeologist Ekaterina Kletnova also failed to produce results. 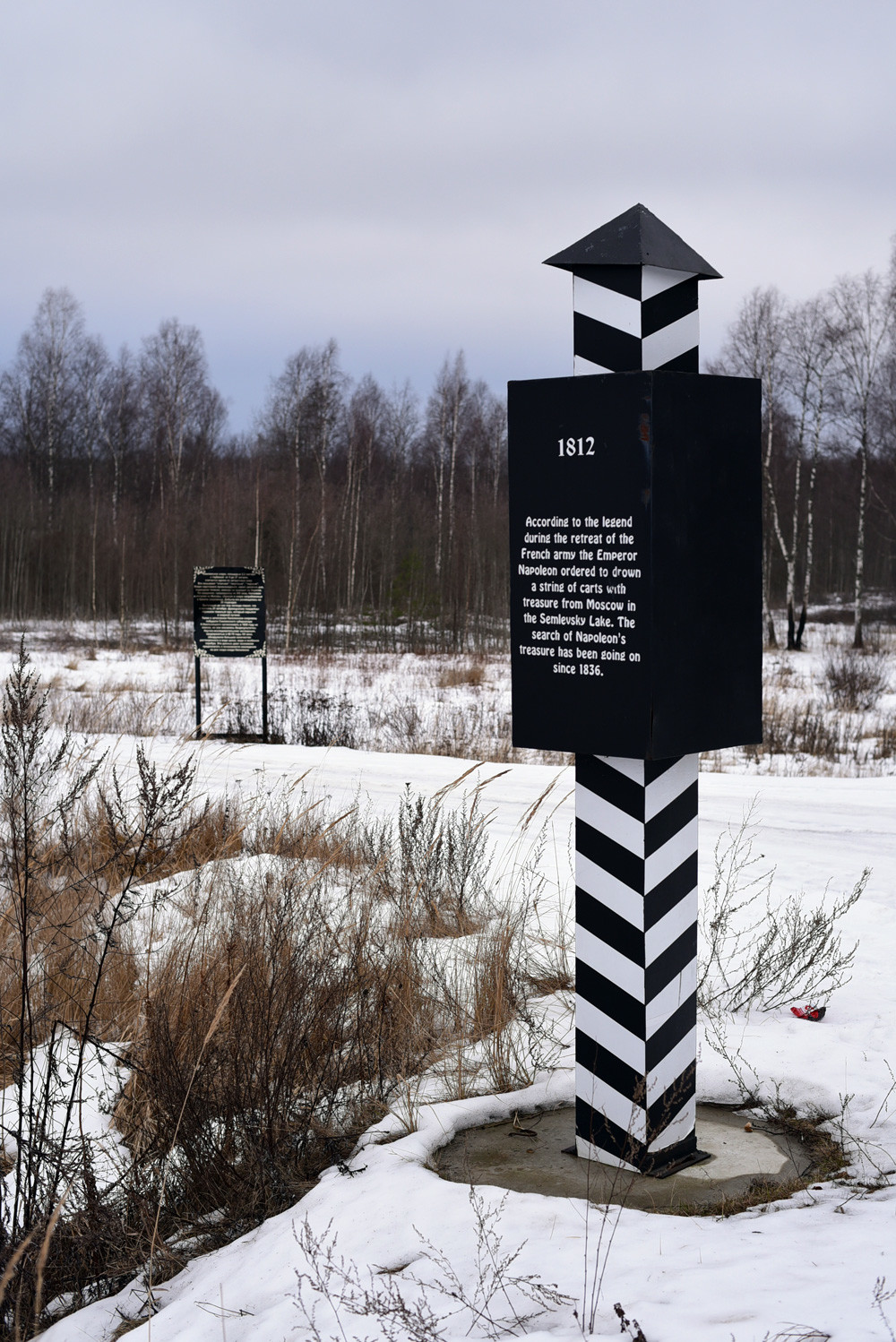 During the Soviet period, there were several attempts to search the lake’s waters for the missing treasure. The best-organized foray took place in the late 1970s and it was described in a TV program (the show is in Russian) by Andrey I, who is now an actor and television presenter but back then was a diver.

“We worked thoroughly and systematically,” he recalled. After topographers mapped the lake, geophysicists and geochemists began working. An investigation revealed “two serious anomalies,” one that was near, but not in, the water. “We used an excavator that dug a 12-meter-deep huge hole. We searched the bottom of it but did not find anything. At the second anomaly, we installed a water monitor. Divers dug a hole there; at the bottom of the shaft, divers discovered only a huge stone.”

Lake Semlevskoe isn’t the only site where explorers have sought Napoleon’s treasure. According to Poryvayev, it’s worth searching near the Berezina River, in what is now Belarus, where French soldiers battled Russians and lost many men and stolen treasure. Several groups of researchers have been to the site, including a French-Belarusian team in 2012 whose search turned up nothing regarding the gold. So the mystery deepens.

And here you can read how Russian merchants turned Bonaparte Napoleon into a successful brand.