What type of government does Russia actually have? 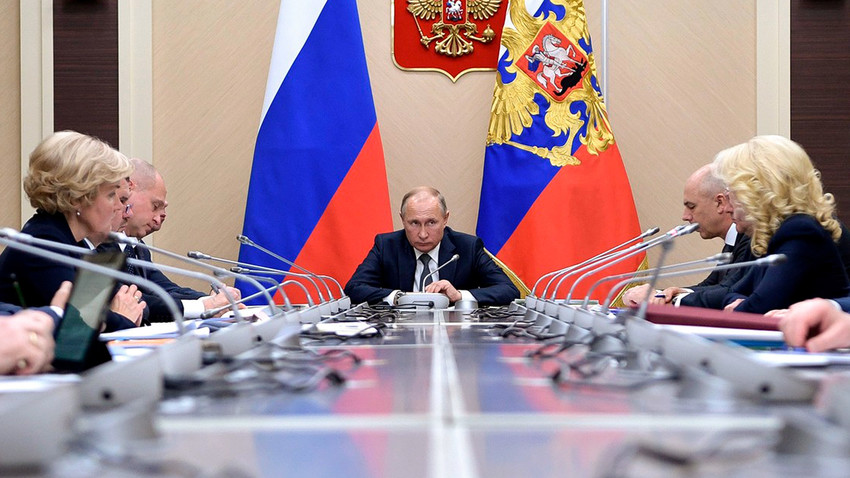 Kremlin.ru
No, a ‘democracy’ is not a type of government.

To answer this question, one must look back in time at how exactly this type of government had evolved historically on this territory. What was the Russian way of organizing a country?

A ’ (prince) was the first type of Russian ruler. Long before the Tatar-Mongol invasion, parts of the land were ruled by local princes. Their primary function for society was to protect the population from invaders and conquerors, and also from local rogues. The ’ was aided by his druzhina (guard), a close-knit fellowship who fought for the ’. In exchange for protection, people of the land paid the ’ an annual tribute. They didn’t really influence his actions, however. 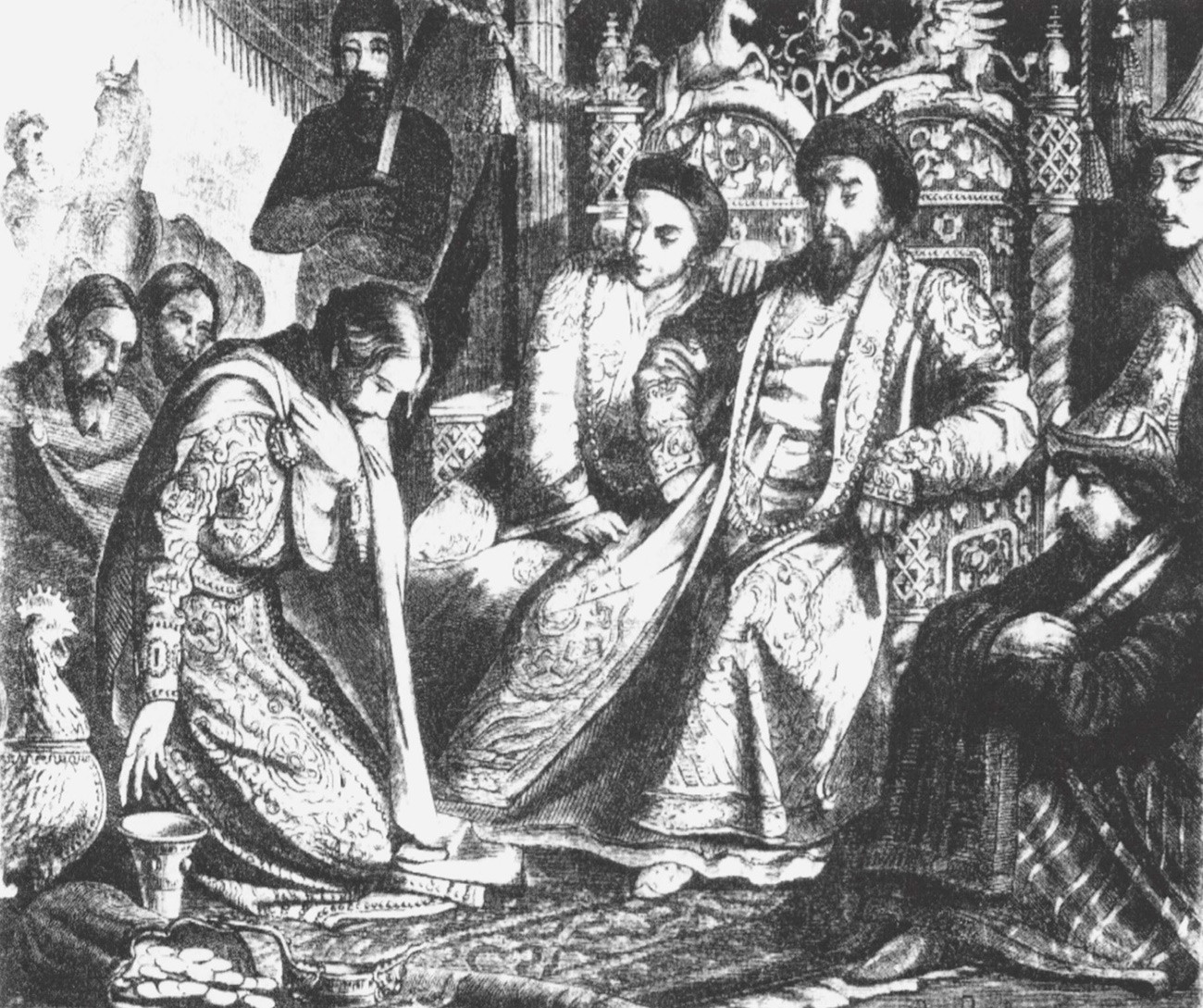 A Russian knyaz' in the Golden Horde. V. Vereschagin.

After the Tatar-Mongols pillaged and enslaved the Russian lands, the function of Russian princes had become subject to Tatar approval – in order to be an ‘official’ prince of some Russian territory, one had to go to the Golden Horde, bringing lavish presents, and ‘earn’ a prince’s credence document, called ‘yarlyk.’ Russian princes, who were important and noble at home, often had to humiliate themselves in the Horde’s capital – for example, walk on their knees towards the khan’s throne.

The Horde influenced the Russian political system in its infancy. Ruthless and cunning ways of the Tatar khans were borrowed by early Russian princes and used in the feudal war. The land needed unity to oppose the Tatar yoke, and gradually, Moscow princes became the most powerful. Grand Prince Ivan the Great of Moscow, who united the land against the Tatars, already called himself a ‘tsar’ – an Eastern title borrowed by Russians. Instead of druzhina, the tsar was surrounded by the boyars – wealthy landlords and military commanders who helped the tsar rule.

The age of the Tsar 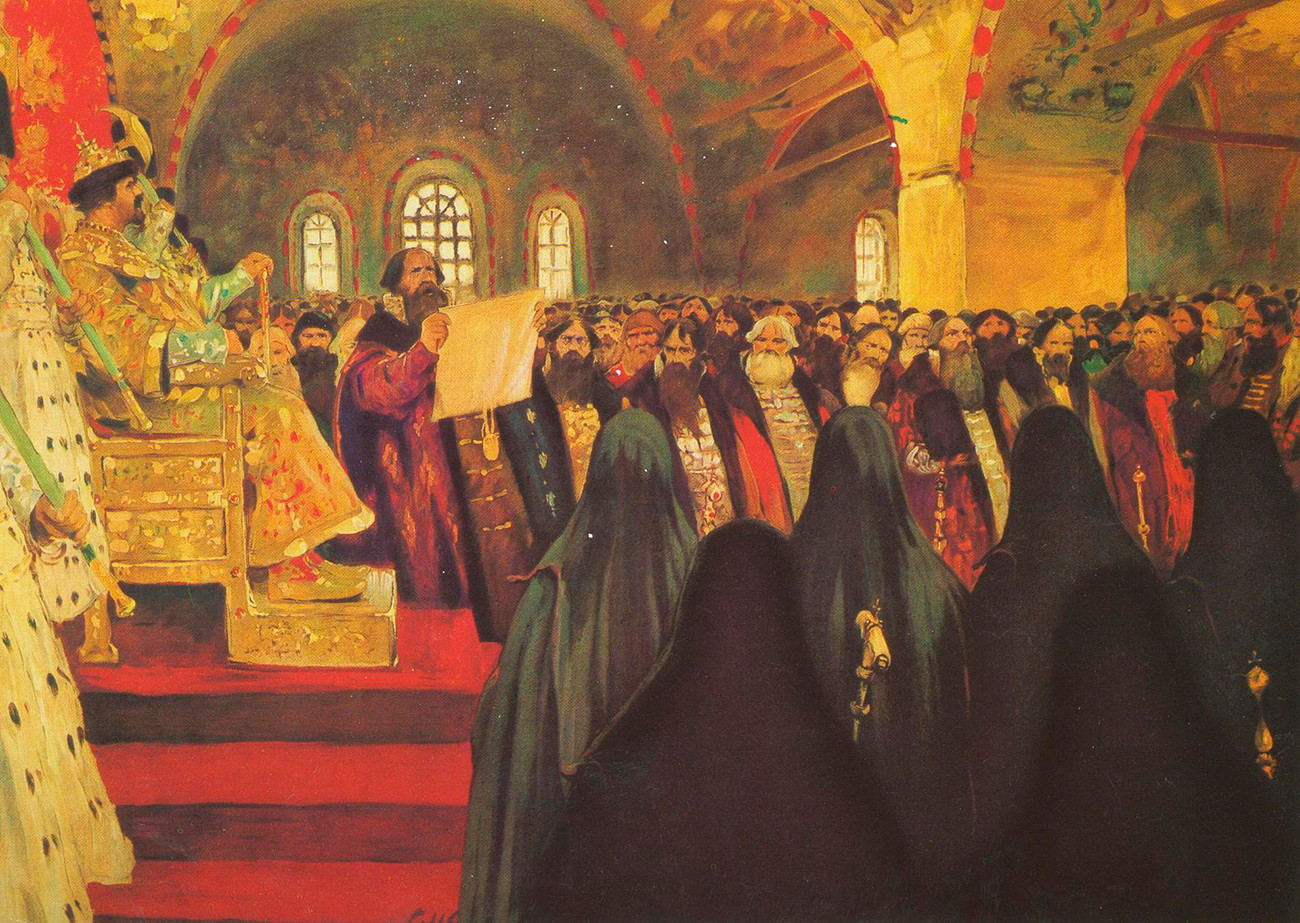 The first official tsar of Russia, Ivan the Terrible, understood that the vast territory he controlled was very diverse and its parts had different goals and wishes. Around 1549, Ivan called upon a Zemsky Sobor – a gathering of the most influential people (noblemen, traders, priests, and military leaders) who were sent to Moscow by local people from different parts of Russia. Russian historians claim this is a Russian form of non-elected, but ‘selected’ representative democracy.

There were about 60 from 1549 to 1684. They gathered irregularly to decide upon the most important questions of the state. The tsar and boyars couldn’t effectively carry out their rule from the center because they didn’t have their finger on the pulse of the rest of the vast land. 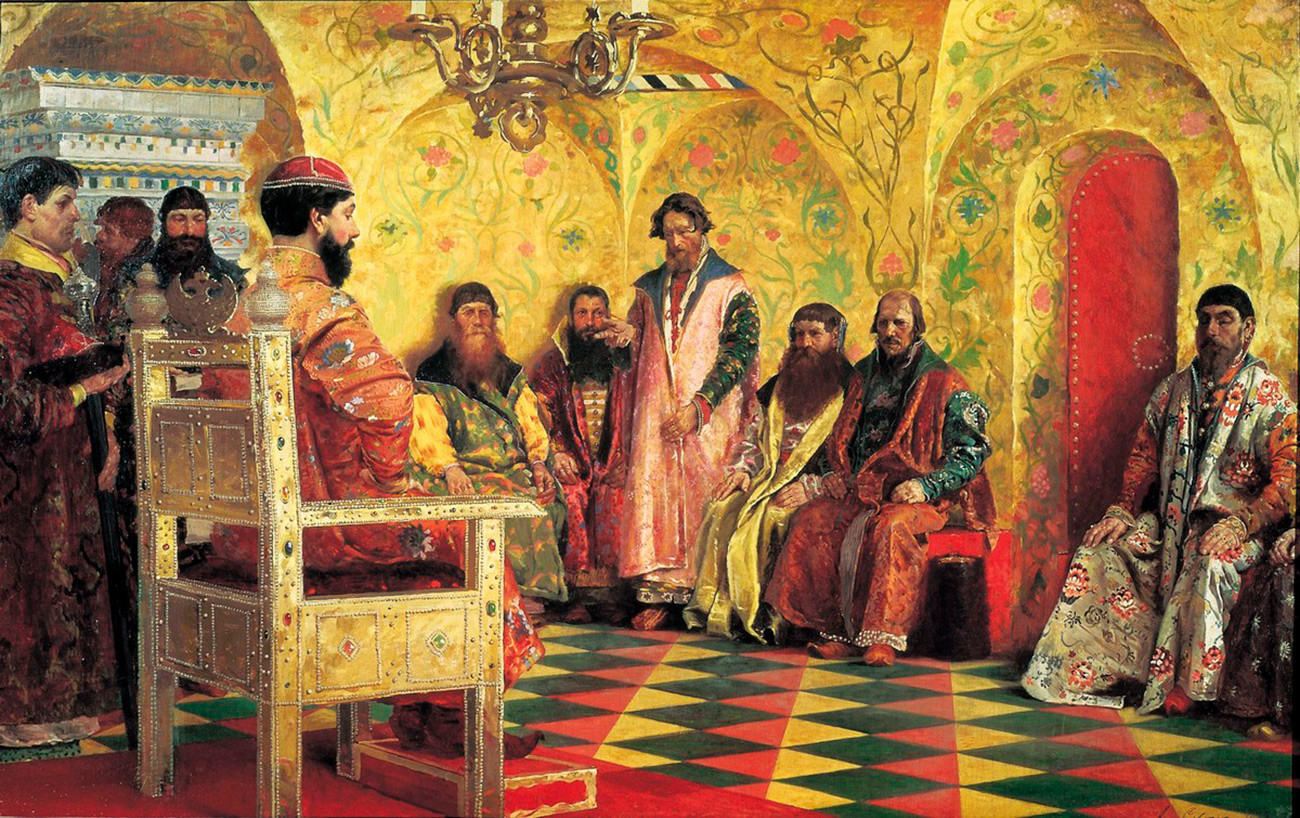 Mikhail Fyodorovich of Russia sitting with his boyars. Andrey Ryabushkin, 1893.

During the 17th century, communication between the country’s center and the periphery was established, and Russian nobility emerged – military men who served the tsar and boyars in exchange for plots of land. They could possess serfs, some of whom became their military men during wartime. There was no longer a need for Sobors, as these noblemen became servants of the tsar and boyars across the country. Meanwhile, boyars were the first among these noblemen. The boyars had a great influence on politics and the tsar. However, they were the and didn’t represent the wishes of the population.

European-styled government appeared in Russia under Peter the Great. He destroyed the boyars who had concentrated too much power in their hands. Now, there was the tsar - an ultimate sovereign - and everybody else, who were his servants. Peter obliged all noblemen to serve the state, either in or civil service, and installed a European legal and government system with collegiums (ministries), the Governing Senate and the Church, also controlled by the state.

Physically or financially destroying the most powerful of the old elite, Peter installed a new elite by giving away large plots of and made sure the titles became hereditary. For most of the 200-year history of the Russian Empire, the balance of power was organized as follows: the nobility was dependent on their serfs, who produced sustenance and goods, and the state was dependent on the nobility who fought in the military, organized businesses and developed . The unstable equilibrium crashed when serfdom was abolished in Russia.

Russian peasants paid a hard price for their freedom – they had to buy out the land they used from the state. This impoverished the majority of the population to an even greater degree. Meanwhile, the nobility was deprived of its main source of income and quickly went into decline. 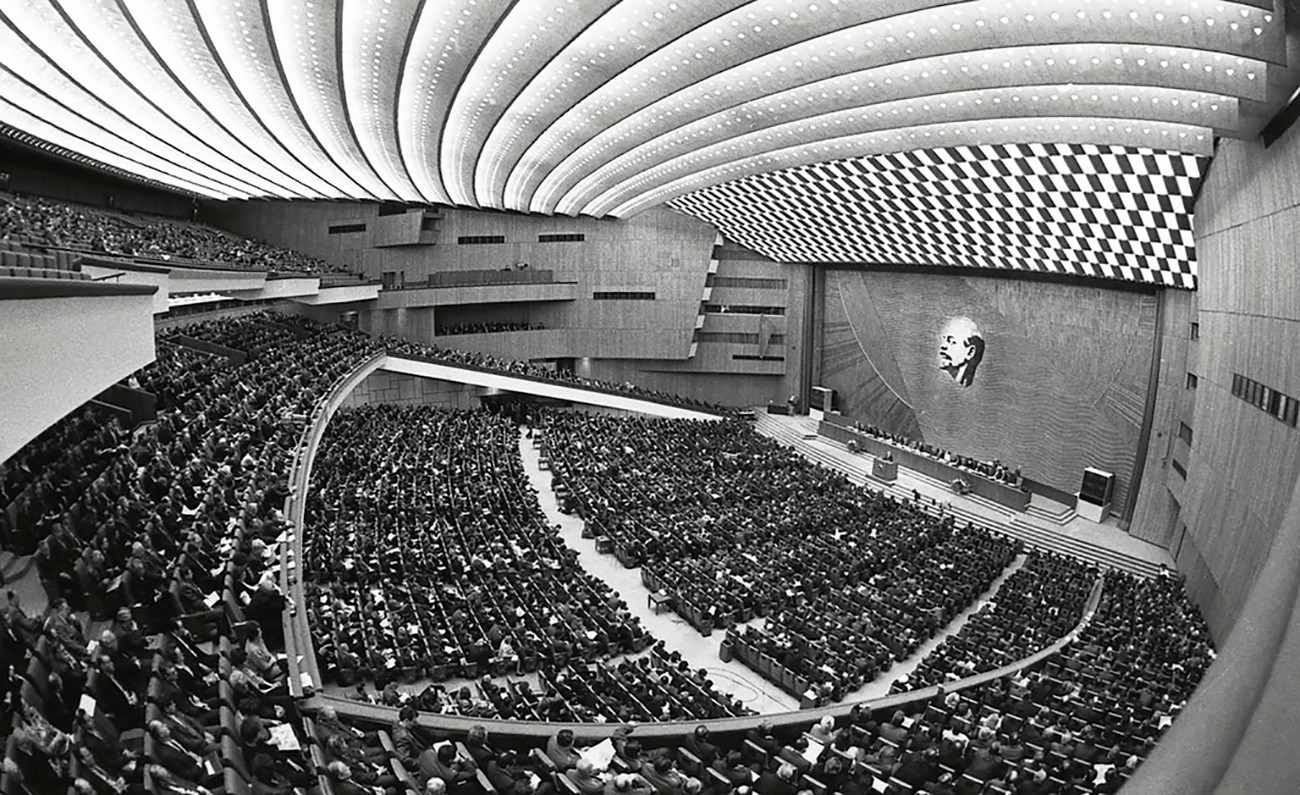 The Bolshevik revolution brought an end to the old order, but the Soviet system largely copied the Tsarist one. The Soviet state organized its own ‘nobility’ – the Communist Party. It was merged with the state apparatus at all levels. Party officials were formally elected by the population. But in reality, all of the top Party positions were subject to appointment by the leader and his “boyars” – the Politburo.

In Tsarist Russia, nobility was hereditary, while Soviet noblemen could be destroyed in the blink of an eye by simply throwing them out of the Party. As appointed local leaders, Soviet officials didn’t represent the wishes of the population, and sometimes went straight against them in service of r their own needs – as Soviet ‘nobility’ wasn’t hereditary, some corrupt officials resorted to stealing and bribery in order to accumulate more personal wealth. Such a system was doomed to failure. 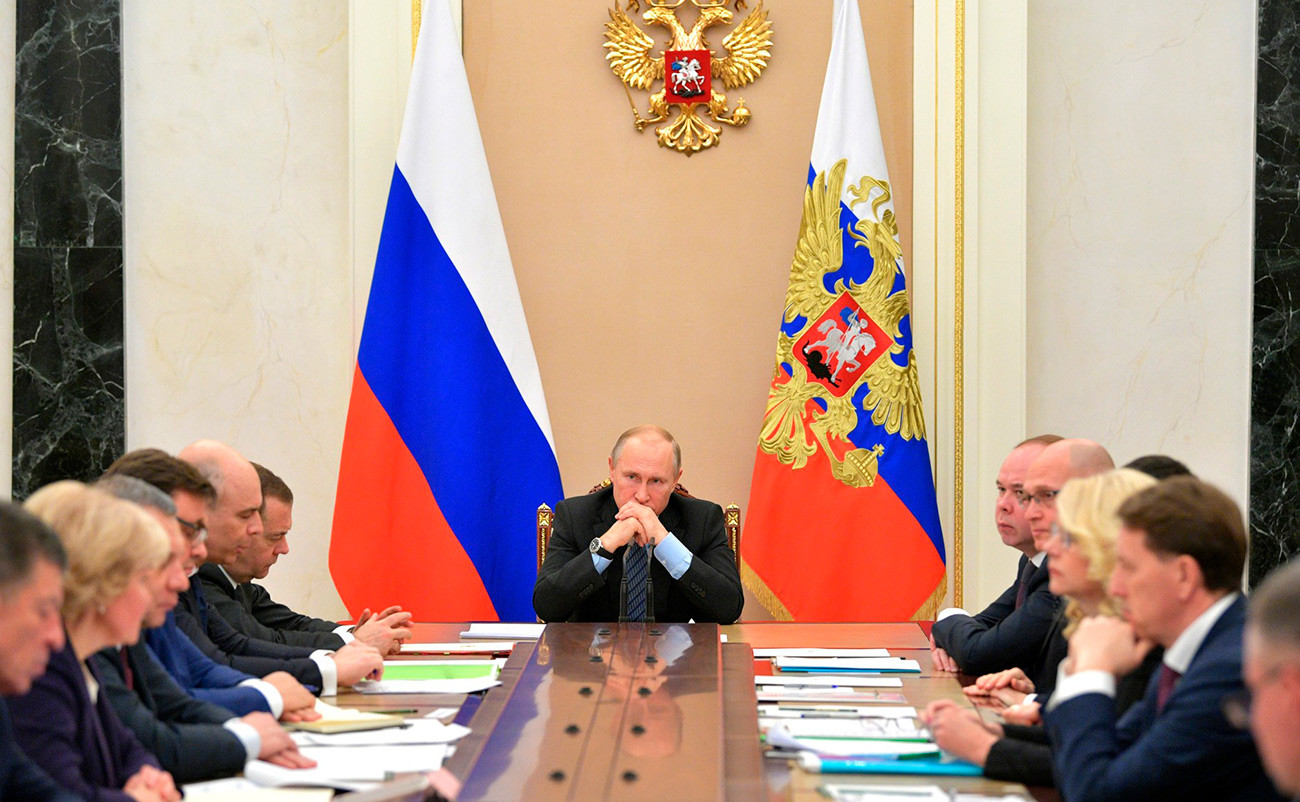 After 1991, the Russian Federation became a presidential republic with a semi-presidential system. This means that people express their wishes by electing both the legislature (a parliament, in Russia – the Federal Assembly) and the executive (the President, who approves the government formed by the Prime Minister) branches of power. To pass a law, both the Federal Assembly and the President must approve it.

The branches of power control each other. The legislature, which approves all laws, may move for a vote of no-confidence to the government and demand its reform. On the other hand, the President can dissolve the State Duma, the lower house of the Federal Assembly, at any time; and the Federation Council (the upper house) can impeach the President.