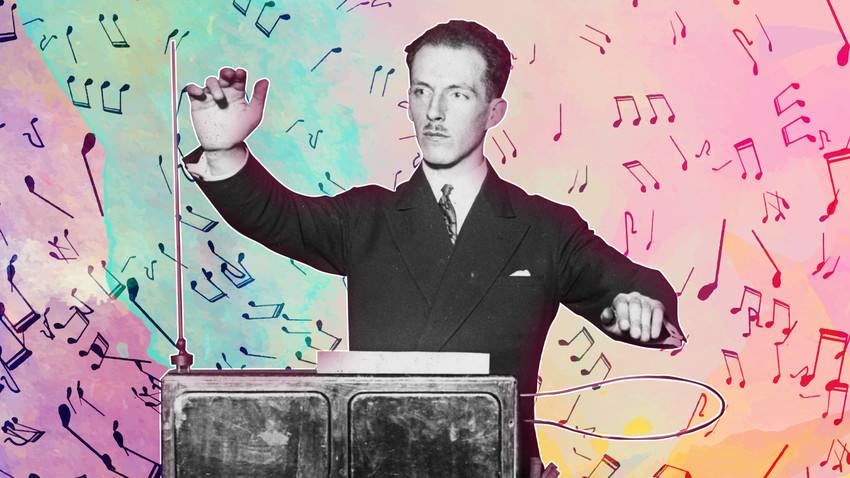 Getty Images, Freepik
He lived until almost 100, and Vladimir Lenin, Led Zeppelin and Pink Floyd all played the theremin, the musical instrument that he invented. But as the Soviet Union stagnated his brilliant ideas were no longer in demand with the country’s leadership.

He always kept his two passions – music and physics – separate. But once, on the instructions of the head of a physics laboratory, he constructed an instrument that measured the parameters of gases, and suddenly realized that the device also produced different sounds when the hands of the researcher were in physical proximity to it.

"Would it be possible to improvise a melody on the device?" thought Léon Theremin. And already the following year he presented his theremin to Lenin in the Kremlin.

From childhood, Léon Theremin played the piano and cello, and was fascinated by physics – his parents even set up a home laboratory for him. He was a brilliant student and simultaneously entered the Conservatory and the university's physics and mathematics department. When World War I started, Theremin was sent to a military school to study radio and electricity. He never got to the front, but during the 1917 Revolution he sided with the Bolsheviks and provided radio communications for them. In an interview Theremin talked about how, together with his colleagues, he created Radio Station No. 1. 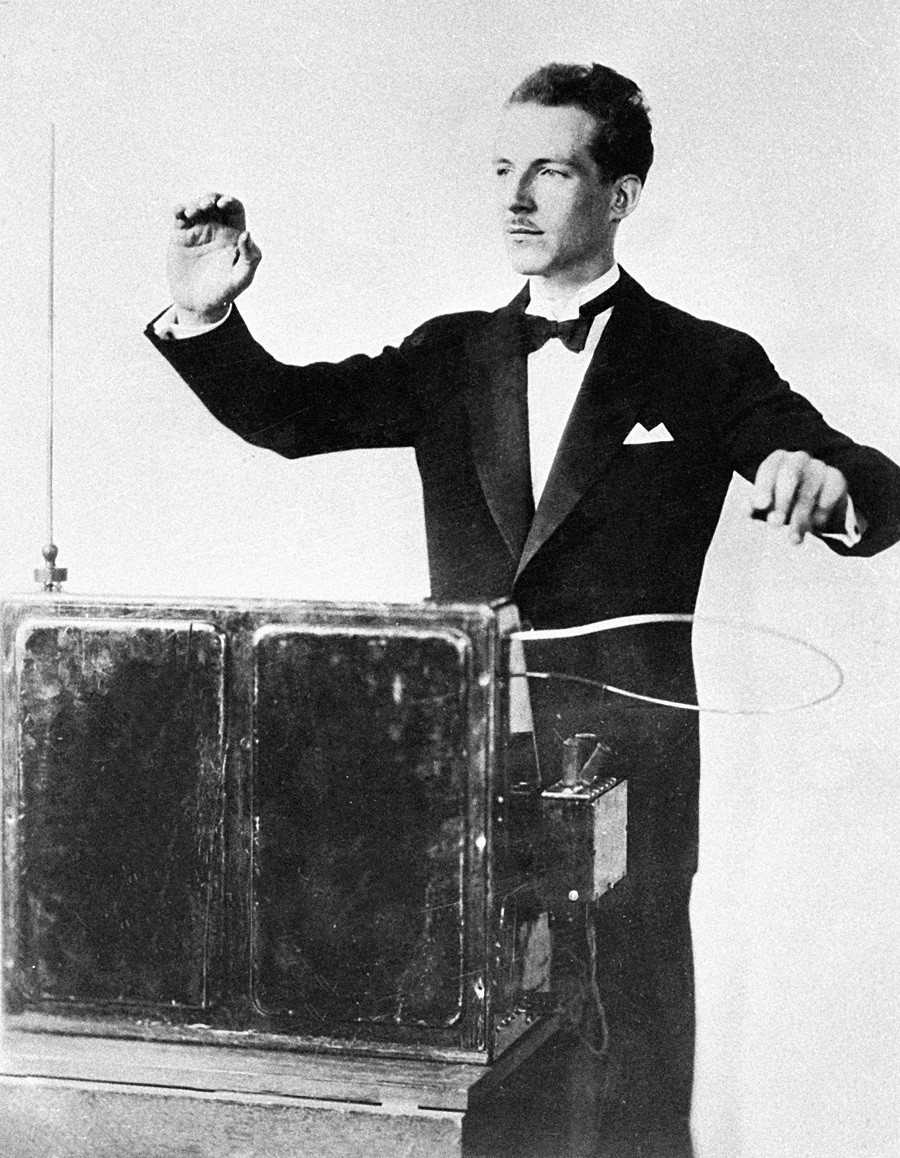 Theremin playing an electric musical instrument invented by him

Soon afterwards, physicist Abram Ioffe enticed Theremin to move to a civilian laboratory and commissioned him to study the properties of gases. Theremin designed an electric device for measuring their parameters, which was to become the forerunner of the theremin.

"I wanted to design an instrument that could create sound without mechanical energy, like an orchestral conductor," Theremin said in an interview with French journalists in 1989. None of the existing mechanical instruments satisfied him. He regarded them as "not very perfect from the point of view of physics". That is how he created the world's first electronic musical instrument.

In 1922, Vladimir Lenin invited Theremin to the Kremlin to demonstrate his invention. The leader of the state even played The Lark by Mikhail Glinka on the theremin.

Apart from the musical instrument, the physicist also showed Lenin another of his inventions – a security alarm. Lenin was impressed and ordered it to be used for the protection of the Kremlin, but he died soon afterwards and didn't have time to carry out the plan.

In 1926, Theremin worked on "distance vision" and invented a prototype of the television – moving objects were depicted on a big screen. The top brass of the Red Army was very interested in the invention, so they immediately classified it. As a result, the device was never properly used even in the army; actually, this is what happened to many creations by Soviet inventors.

Life in the U.S.: Music with a bit of espionage

In 1928, he was invited to the U.S. with his theremin, and the Soviet authorities duly dispatched him, while also giving him with intelligence gathering duties.

"In order to have an opportunity to demonstrate the devices and to be able to engage with research in other fields, a big building about seven stories high was rented for me in the center of New York," Theremin recalled.

Albert Einstein used to visit him there. Theremin recalled that Einstein was interested in the interaction of music and geometric figures, and in 1931 Theremin designed for the great scientist the rhythmicon - a musical instrument that could reproduce patterns through a projector. 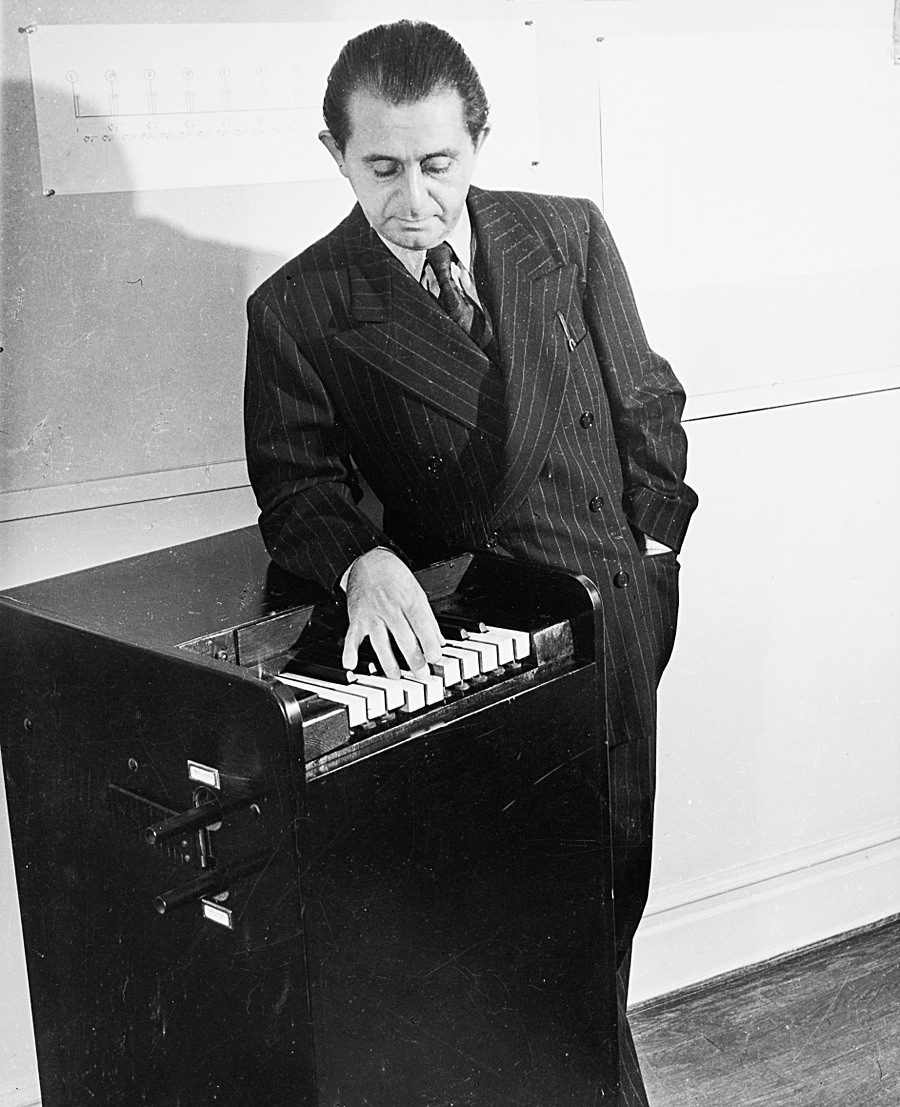 The inventor also patented his theremin and sold a licence for its production to Radio Corporation of America (RCA), but the complex device did not have much commercial success.

Return to the USSR and prison

After 10 years in the U.S., Theremin returned to the USSR at the height of the Great Terror. He said in an interview that he had asked to come back, but there are accounts that he was forcibly brought back because he had married an African-American dancer. In 1939, Theremin was arrested and sentenced to eight years in prison camps. 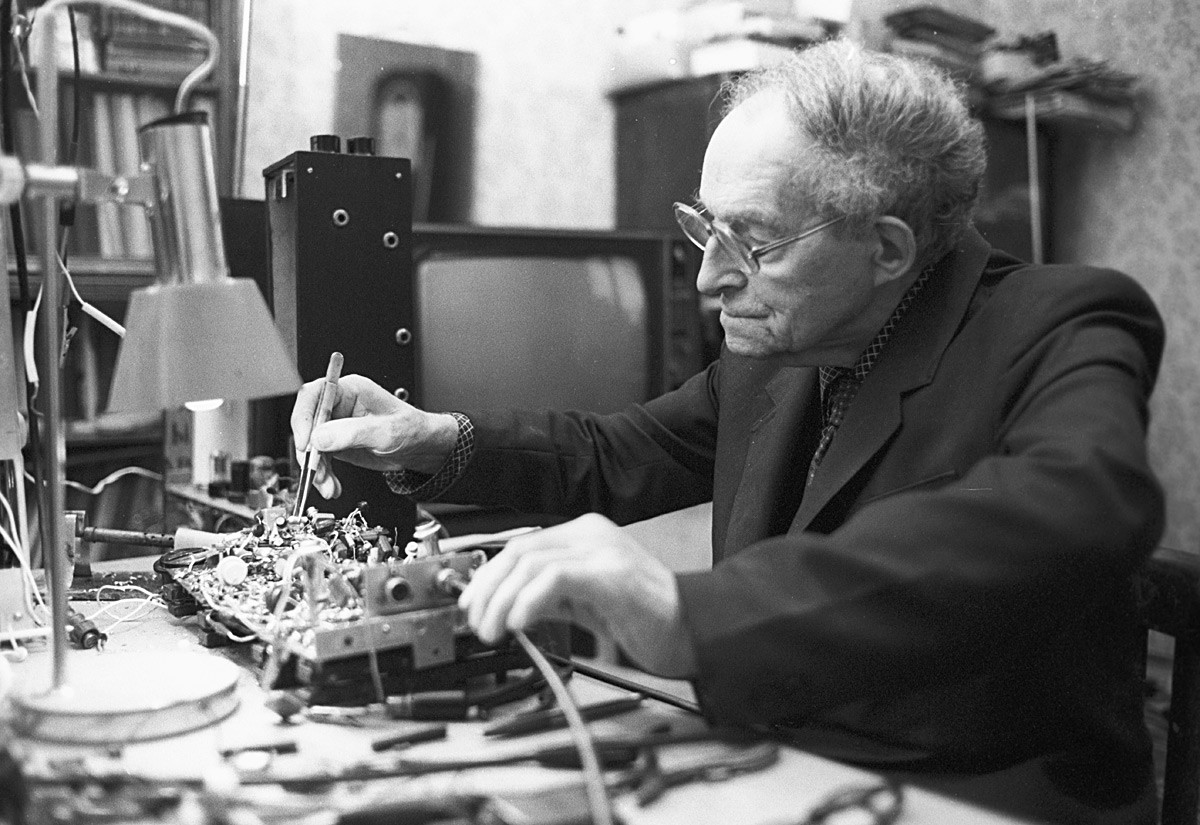 Leon Theremin in his lab

The inventor spent about a year in a prison camp in Kolyma, but soon the Soviet authorities transferred him to TsKB 29, a design bureau in Moscow that was part of the prison system (aircraft designer Andrei Tupolev and future rocket engineer, Sergei Korolev, also worked there).

Theremin worked on eavesdropping devices for the Soviet secret services. For instance, his "bug" was mounted in the Great Seal of the U.S. which the USSR presented to the American ambassador. The device was discovered only seven years later. (Now the "bug" is kept at the National Cryptologic Museum of the U.S. National Security Agency).

The U.S. Great Seal that was gifted by the USSR and contained a bug. R: A bug on display at the National Cryptologic Museum

Life after Stalin and oblivion

In 1947, Theremin was released and rehabilitated. He continued working as a designer and also taught at the Conservatory. But in the 1970s nobody was interested in his ideas. 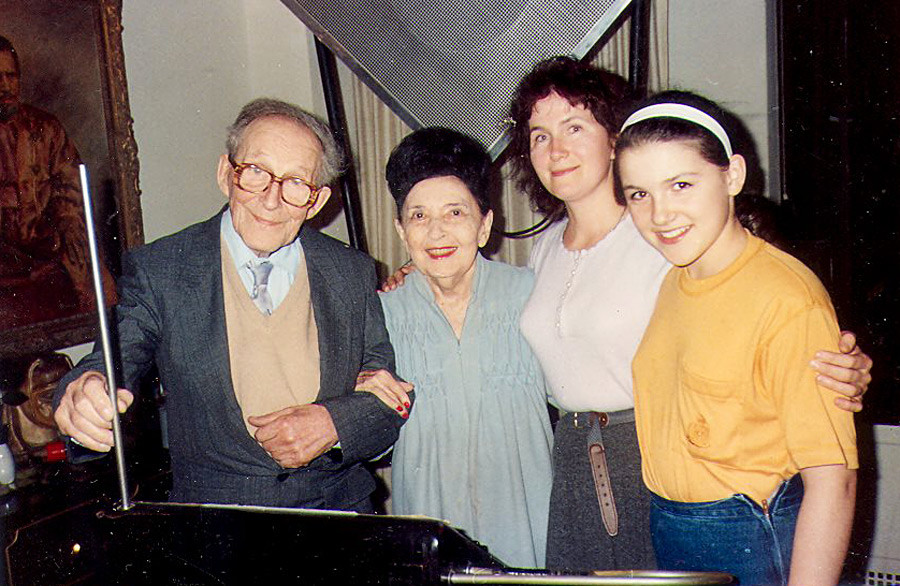 Lidia Kavina, a relative of Theremin’s, recalled that he was saddened and upset by this: "The editorial offices of magazines to which he took his articles did not take him seriously. In the stagnant late Soviet period his designs for glance-sensitive sensors, ideas of longevity and microscopy of time provoked sarcastic sneers." 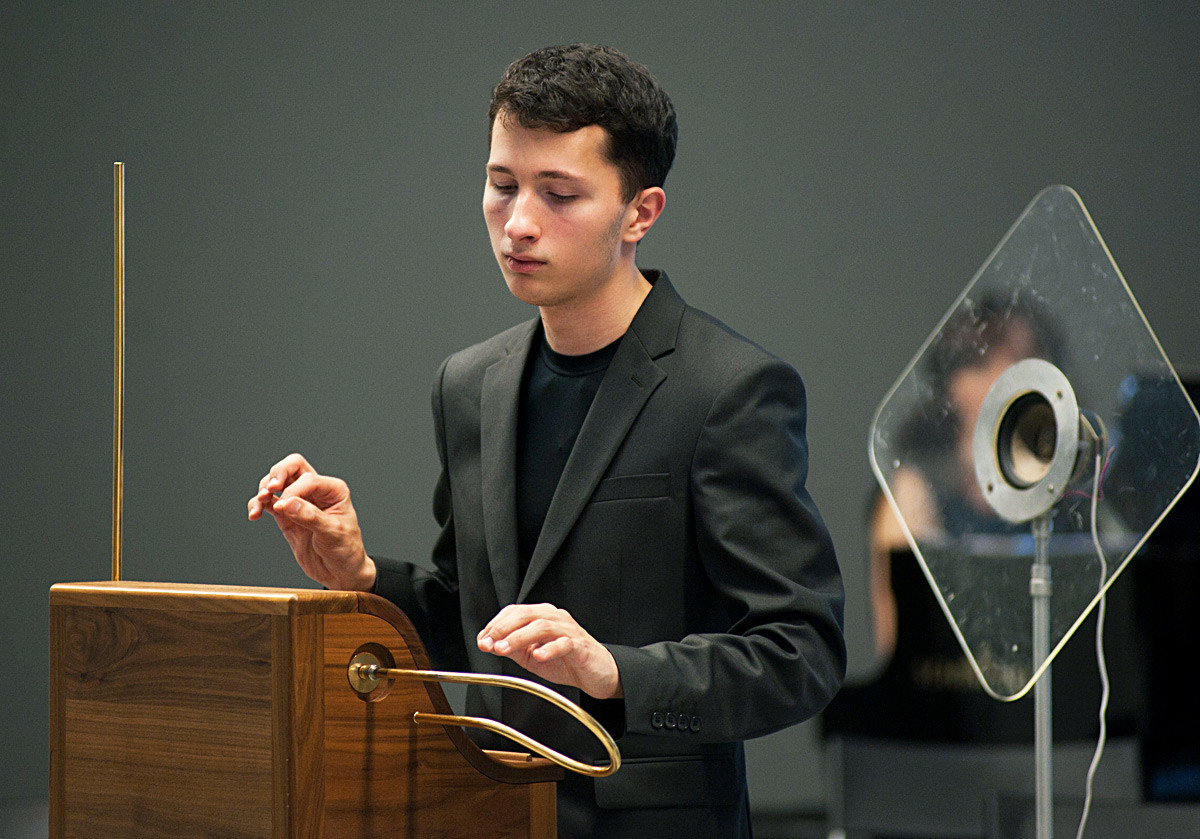 Now the inventor's great-grandson, Peter Theremin, promotes the instrument. He is one of the leading performers and teachers of the theremin. He is also the head of the Russian Theremin School.