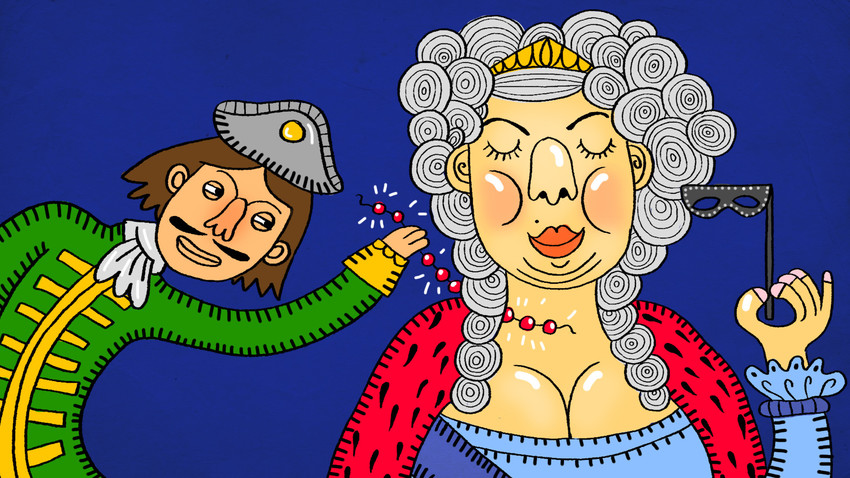 The Russian Empire was a great place for fraudsters.

Irina Baranova
These guys knew all there was to know about swindling everyone — from the man in the street to the Louvre. 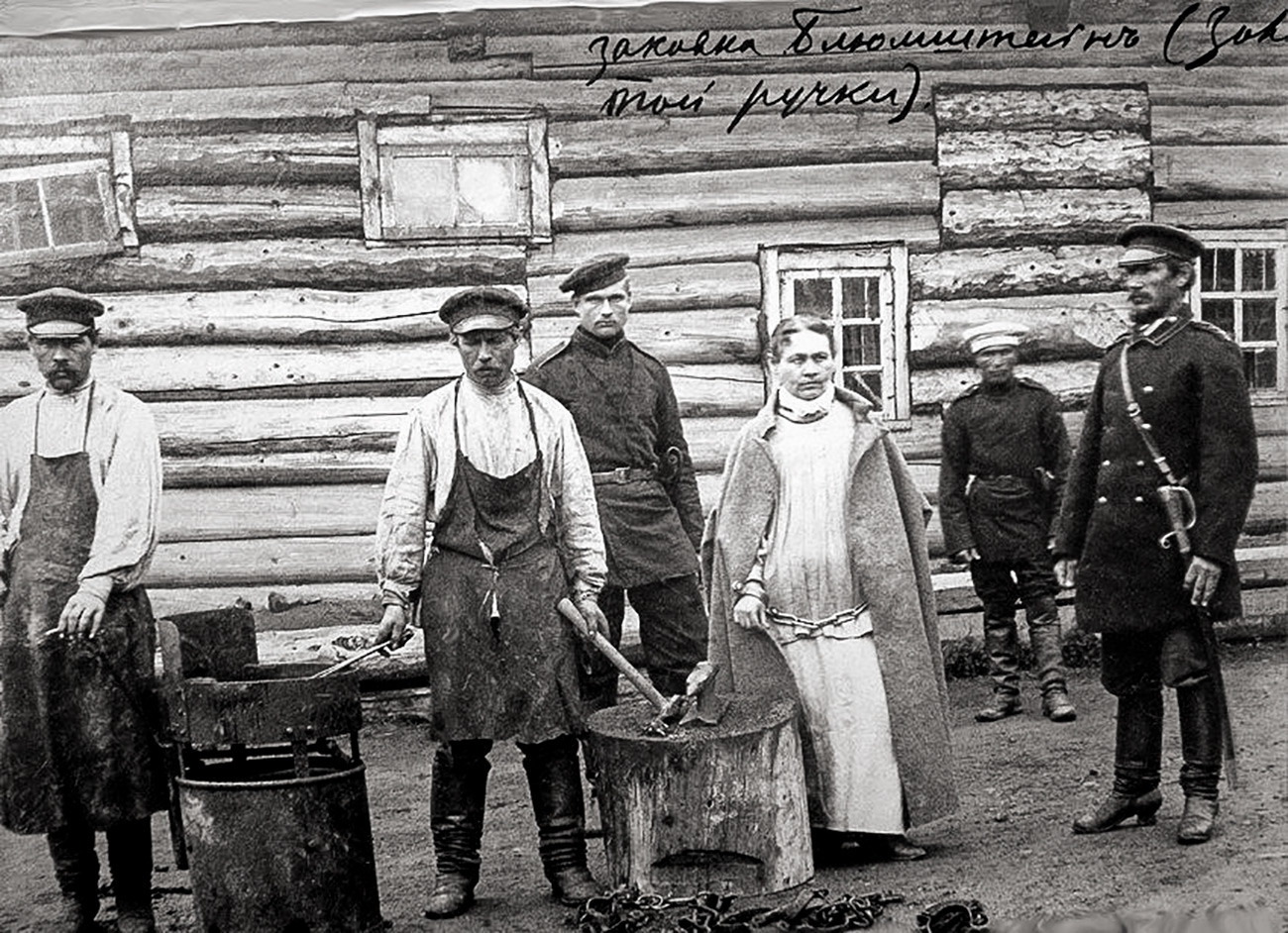 “Such a small, slender, slightly graying woman with a battered, old woman’s face... Looking at her, I cannot believe that until recently she was so beautiful that she charmed all her jailers,” Sonya Bluvstein, known in the criminal world as a thief and con artist Sonya the Golden Hand, was thus described by the great Anton Chekhov.

The writer met Sonya in 1890, on the island of Sakhalin, where she was serving time after being caught, her glory years well and truly behind her. But in the 1860s-70s, Bluvstein, a Jewish woman from a small settlement near Warsaw, blazed a criminal trail across Russia and Europe (she knew five languages), masterminded thefts, and swindled huge sums from ordinary folk.

Sonya acted brash and bold, wearing her talent on her sleeve. Under the guise of a noblewoman, she breezed into hotels, calmly broke into rooms, and cleaned them out. She stole diamonds from jewelry stores, placing them under false nails or in her mouth. Posing as an aristocrat or merchant woman, she came across as so well-meaning and kind-hearted that everyone trusted her with money and jewelry.

Sonya was repeatedly arrested, tried, and sometimes jailed, but always charmed her way past the guards. A juror at one of her various trials said admiringly that she could “fit a good hundred men under her thumb.” But as time eroded her looks, and Lady Luck became less accommodating, she ended her days on windswept Sakhalin. Nevertheless, that didn’t stop legends circulating that the elusive thief had managed to escape from hard labor to spend her autumn years in Odessa or New York.

See the separate article about Sonya the Golden Hand on our website.

2. The Jacks of Hearts Club 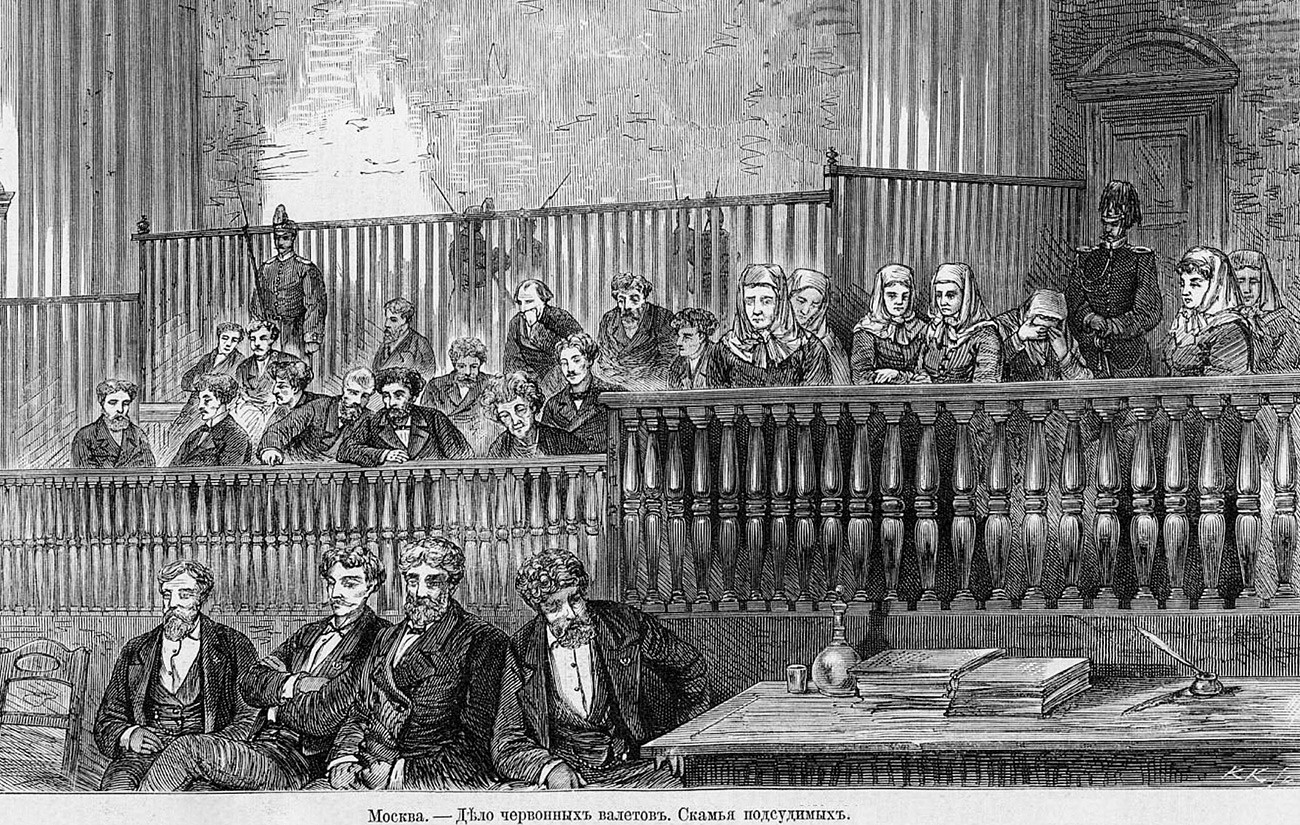 A cartoon depicting the trial of the Jacks of Hearts club. This was quite a gig!

In 1871-75, a large conglomerate of fraudsters was active in Russia, which counted more than 40 people: from Prince Dolgorukov, a descendant of the Rurikids, to prostitutes and slum-dwellers. The gang was given its name by an investigator who borrowed it from a popular contemporary French detective story about a group of similarly brazen thieves.

“The defendants were charged with about 60 different crimes, totaling more than 300,000 rubles in damages,” writes lawyer Alexander Zvyagintsev about the “jacks trial” in 1877. As newspaper Moskovskiye Vedomosti testifies, “Tickets for the public were sold out” – everyone, it seems, wanted a ringside seat at the fight between the law and the stars of the underworld.

The “jacks” had a diverse profile: they set up shell companies and demanded deposits from job applicants; they printed counterfeit money, or sometimes simply got rich people drunk and made them sign documents of indebtedness. In the end, 19 of the 45 accused were acquitted; the rest were sentenced to various terms of exile in Siberia. 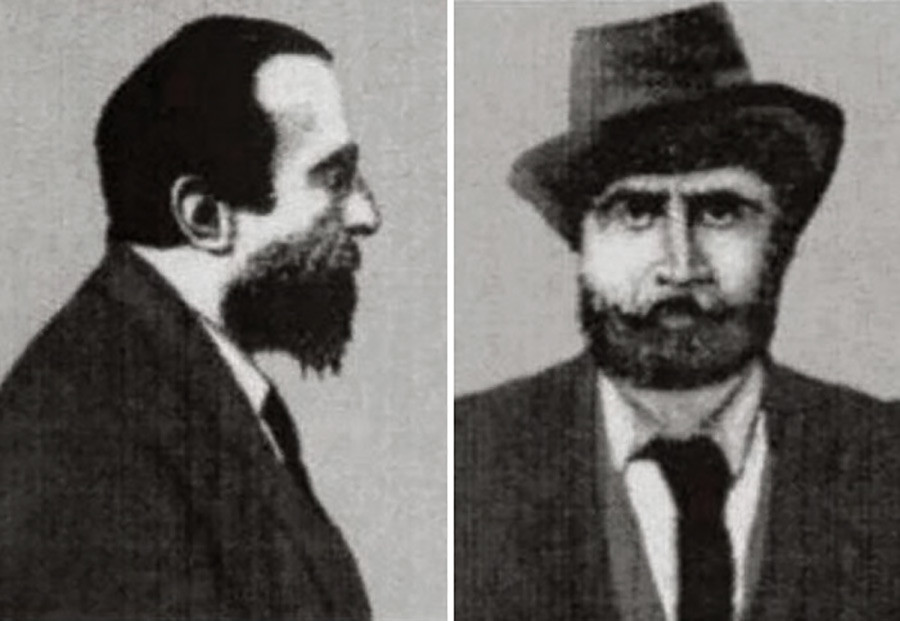 Savin photographed (poorly) after his arrest.

The biography of this fraudster is difficult to verify since it is based primarily on his own stories – and Savin was nothing if not a liar. He is known to have been born into a noble family, and to have served for some time in the light cavalry (for which he earned the “cornet” epithet), but after that things get hazy.

In Savin’s own words, as a young man he was friends with Leo Tolstoy. He also recounts how he helped the cousin of Alexander III, Grand Duke Nikolai Konstantinovich, pinch diamonds from his own mother. These legends are impossible to substantiate.

In 1887, Savin even told journalist Vladimir Gilyarovsky that he had almost become the king of Bulgaria. At that time the Bulgarian throne was vacant, and the regent Stefan Stambolov had allegedly considered the candidacy of a certain Count de Toulouse-Lautrec (Savin’s pseudonym on his travels in Europe) but had ultimately decided against it. “Being a Russian and a Slav, I could have delivered more benefit to Russia as a Bulgarian prince than any German appointed by Bismarck and England,” opined Savin in his memoirs.

As for the real, documented accomplishments of Cornet Savin, it must be said that he strongly resembled a male version of Sonya the Golden Hand – they shared the same sense of daring, traveled around Russia and Europe, and got up to all sorts of tricks, always landing on their feet. He passed himself off as a man of wealth, used countless false names, married rich heiresses, and then appropriated their fortunes – there were no depths that Savin was not prepared to dredge for the sake of filthy lucre. He was finally arrested and imprisoned in 1911 and remained behind bars until the 1917 revolution. Having been freed, the fraudster fled the Bolsheviks to the Far East, where he died in 1937. 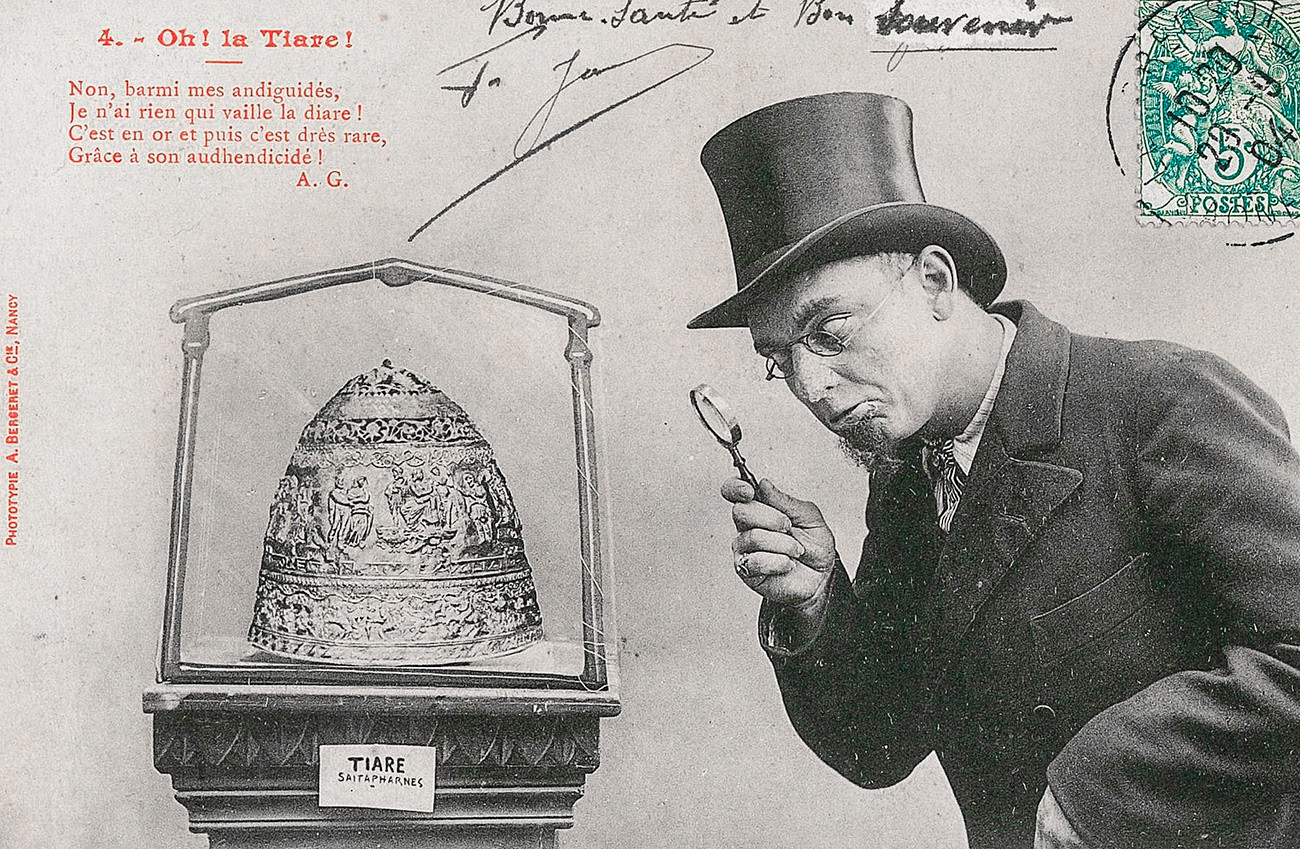 A postcard mocking the Gokhman case, when the Louvre acquired a fake Skythian tiara.

Unlike the other scammers in our list, Shepsel and Leiba Gokhman, two merchant brothers from the Ukrainian city of Ochakiv, were not famous throughout Russia, and did not strive to be so. On the other hand, they managed to deceive the Louvre in Paris, one of the greatest museums in the world.

The Gokhmans specialized in selling fake historical artifacts, and in 1896 they literally struck gold when the Louvre acquired what it thought was the golden tiara of Saitaphernes, a third-century BC Scythian king. In actual fact, the “ancient artifact” was the work of Odessa jeweler Israel Rukhomovsky.

It is Rukhomovsky who is the hero of the tale. Unlike the Gokhmans, he was an honest man and did not know that his tiara would be presented as an antiquity. But he did such a good job that European scholars verified the authenticity of the objet d’art (which it was, just not an old one). “The finest archaeologists and art experts were brought in to give their opinion. And almost all of them unanimously confirmed the ‘tiara of Saitaphernes’ to be a genuine work of ancient art of high value,” wrote ethnographer Alexander Gun. But it was the Gokhmans who profited from the deception: the Louvre paid 200,000 francs for the piece, a gigantic sum in those days.

When German archaeologist Adolf Furtwängler became the first to question the authenticity of the tiara, the French academic community was outraged. “The possibility that the tiara might be forged posed a direct threat to France’s reputation as a cultural power,” explains Aviva Briefel in the book The Deceivers: Art Forgery and Identity in the Nineteenth Century. Only seven years later, in 1903, did the Louvre admit that it had been duped: Rukhomovsky himself journeyed to Paris and proved that he had made the tiara by recreating part of the ornament. The humble jeweler became a celebrity, and museum workers had to move the tiara to the modern art section. As for the Gokhmans, they never thought of returning the money.