How the disappearing Sámi people are reviving Russian Lapland 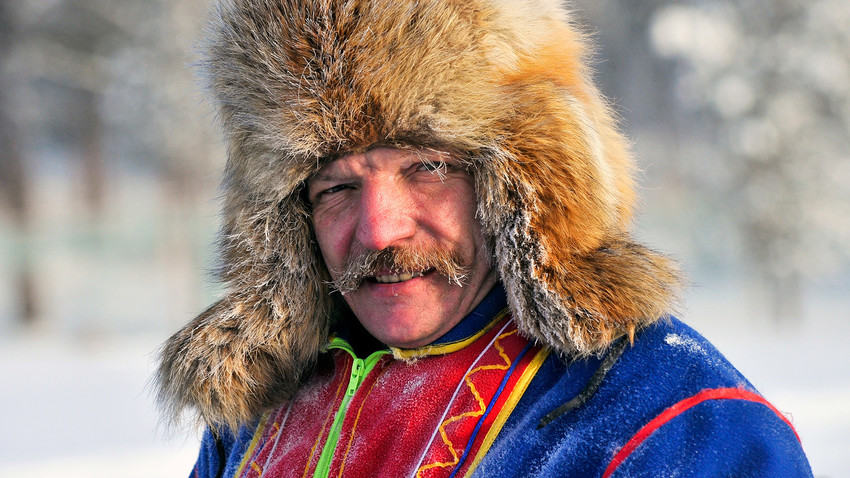 Leo Fedoseev/TASS
Russia accounts for the smallest remaining number of the Sámi, an indigenous people of northern Europe. In order to survive, they have decided to give Russian Lapland a modern facelift with a traditional twist.

Next to the post office and the only major food store, Diksi, stands a concrete building with a triangular roof like a chum, the traditional Sámi dwelling. The chum used to be a restaurant before the building was bought by Russia's biggest bank, Sberbank. Now there is a sign above the iron door giving the opening hours of the National Sámi Center. Inside, it is usually empty. On its walls are photographs of the tundra (which starts 100 meters from here), a timetable of activities for children and samples of handicraft items such as deerskin mittens. 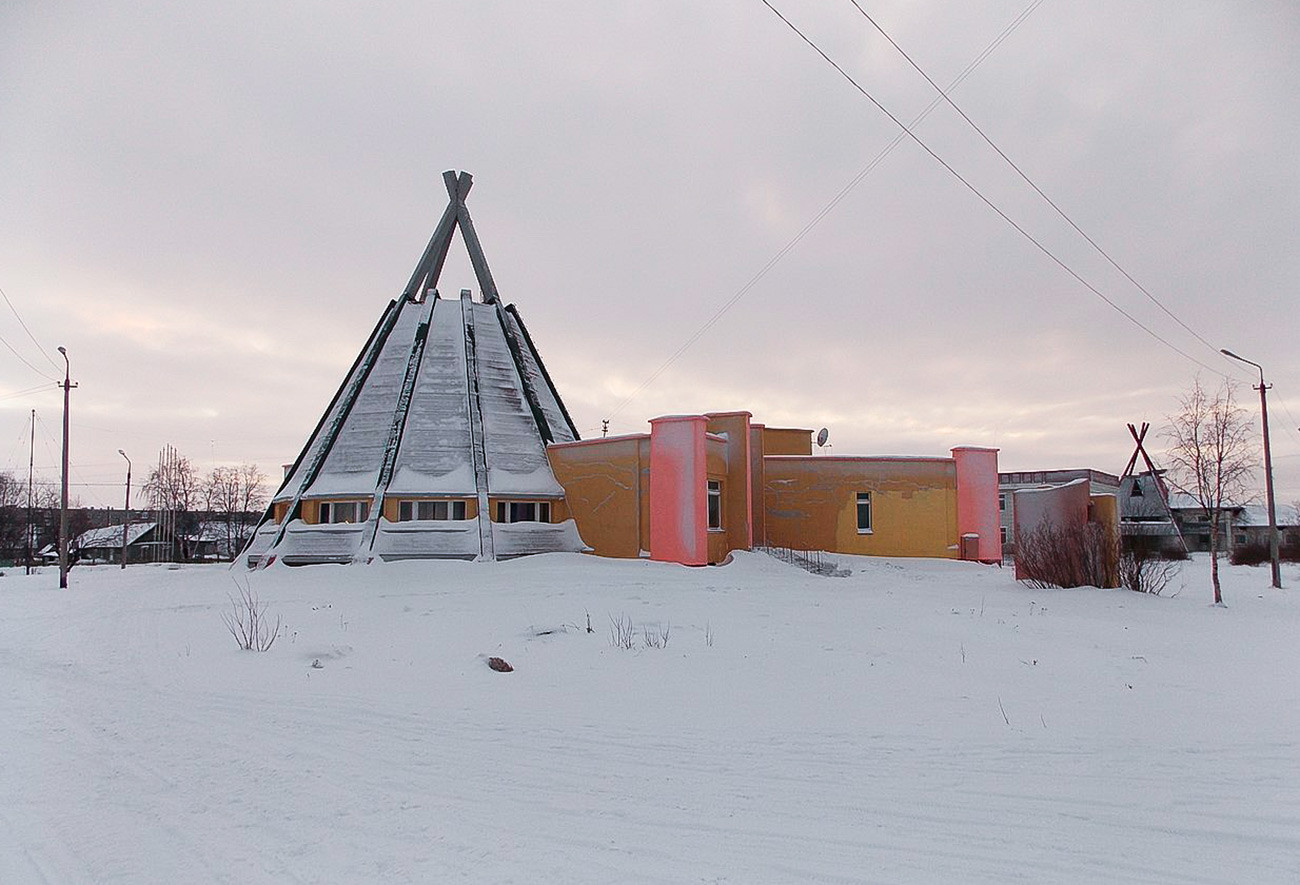 This is the settlement of Lovozero on the Kola Peninsula, a location beyond the Arctic Circle. Murmansk, a major city, is 167 km away. But it is this village in the middle of the tundra that is the "capital" of Russian Lapland. There are more Sámi people here per square meter here than anywhere else, and all they are trying to do is not to disappear. For several decades those who continue to call themselves Sámi have been using the word with resentment: "We have been turned into a decorative nation." 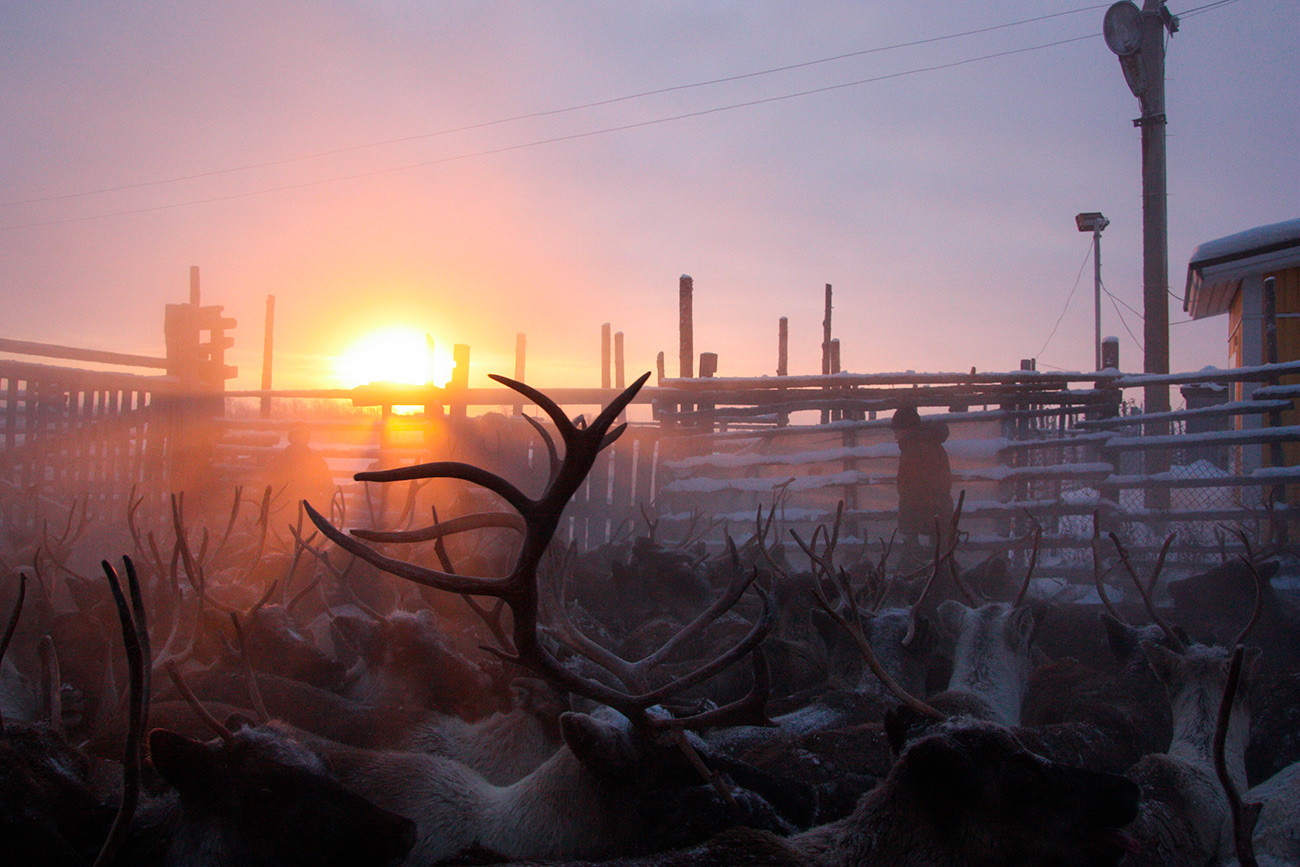 ‘At school we were not allowed to speak the Sámi language’

The Sámi are an indigenous people of northern Europe and the lands they inhabit are called Lapland, from the ancient name used to refer to them - Lapps (the corresponding Russian term is "lopari"). The lands they inhabit are spread out across four countries - Norway, Sweden, Finland and Russia. In total, there are about 80,000 of them, with most residing in Norway, and the smallest number in Russia. 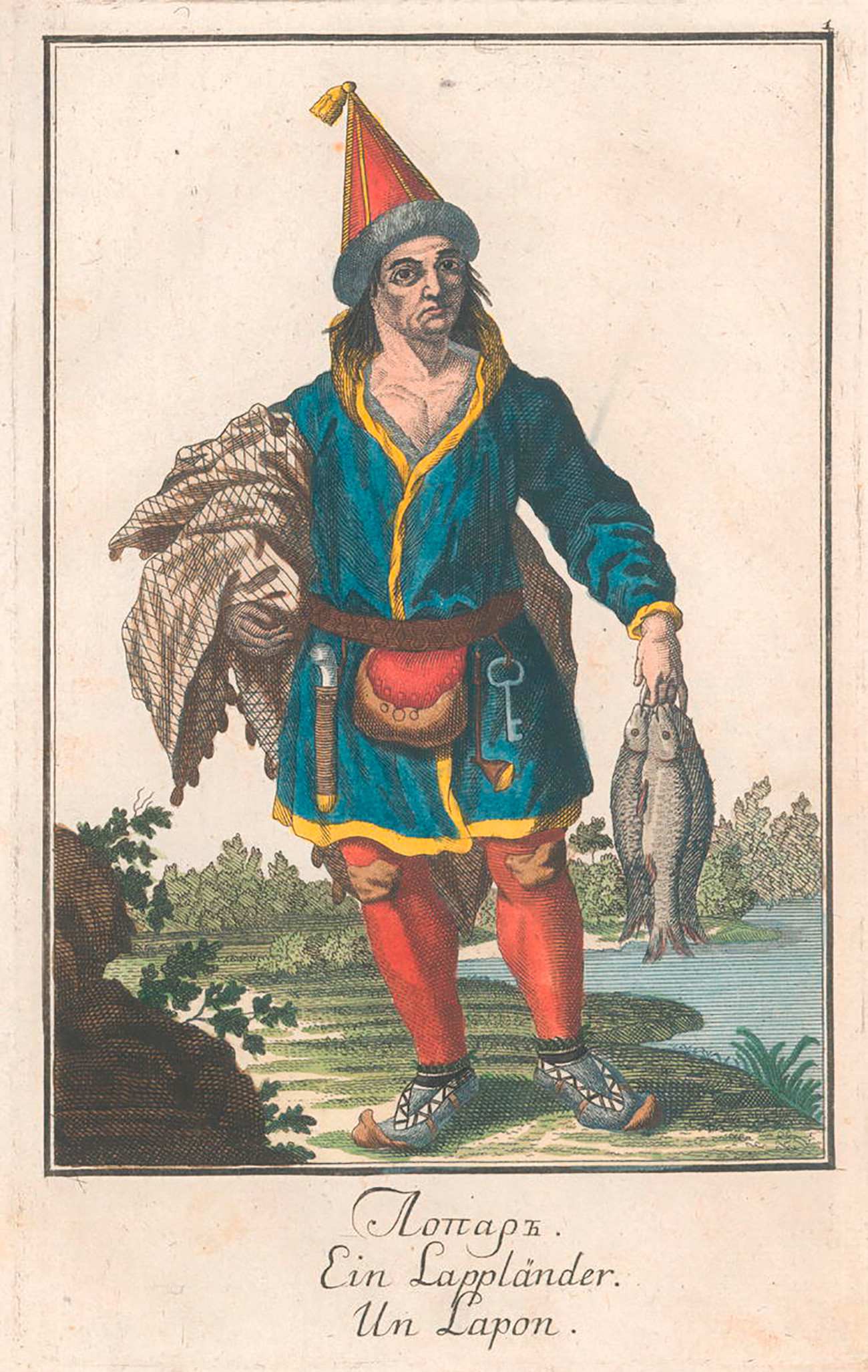 According to the 2010 census, Russia numbers only 1,771 Lapps, and the figure has not changed much since the beginning of the 20th century: the Russian Empire, as well as the USSR and the Russian Federation, have always had about the same number of Lapps. But what has changed a lot is the number of Sámi who remember their language and traditions

"During the Soviet period we were not allowed to speak the Sámi language at school," Valentina Sovkina, a Lovozero resident, says. "But I still heard it spoken at home. Today I can understand the language and ask all my relatives who know the language to speak it to me. My sons know two or three words." 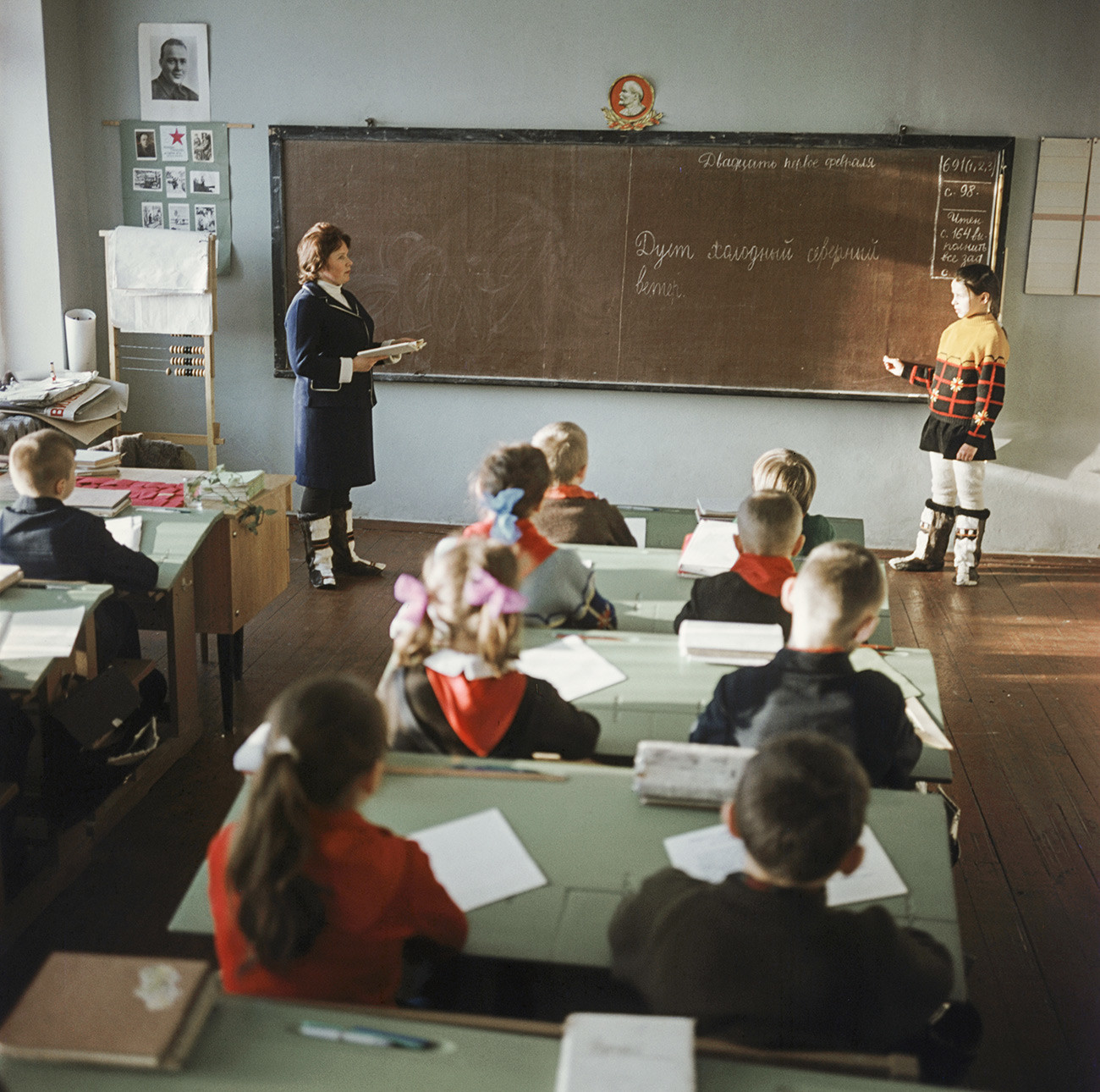 In fact, there is no single Sámi language - instead, there are different Sámi dialects. In Russia four of them are spoken.

Candidate of Philology Rimma Kuruch recalled: "When in 1975 I came to Murmansk, I knew that the Sámi lived on the Kola Peninsula but I couldn't have imagined the state their national culture was in. The Sámi language was literally passed on by word of mouth as it had no written form and was not taught at school." It was then that a group of enthusiasts got together and started working on the Sámi alphabet, a Sámi primer and a Sámi dictionary. It was not the first such attempt, but definitely the most successful. The Sámi language (Kildin dialect) started to be taught in Lovozero's schools and colleges. Still, only 353 people speak it in Russia, and most of them are aged between 70 and 80.

Nomadic people from the past

Nowadays young Sámi try to move to town at the first opportunity. They don't have much choice in Lovozero. Essentially, just a single one - to go to work in the tundra. 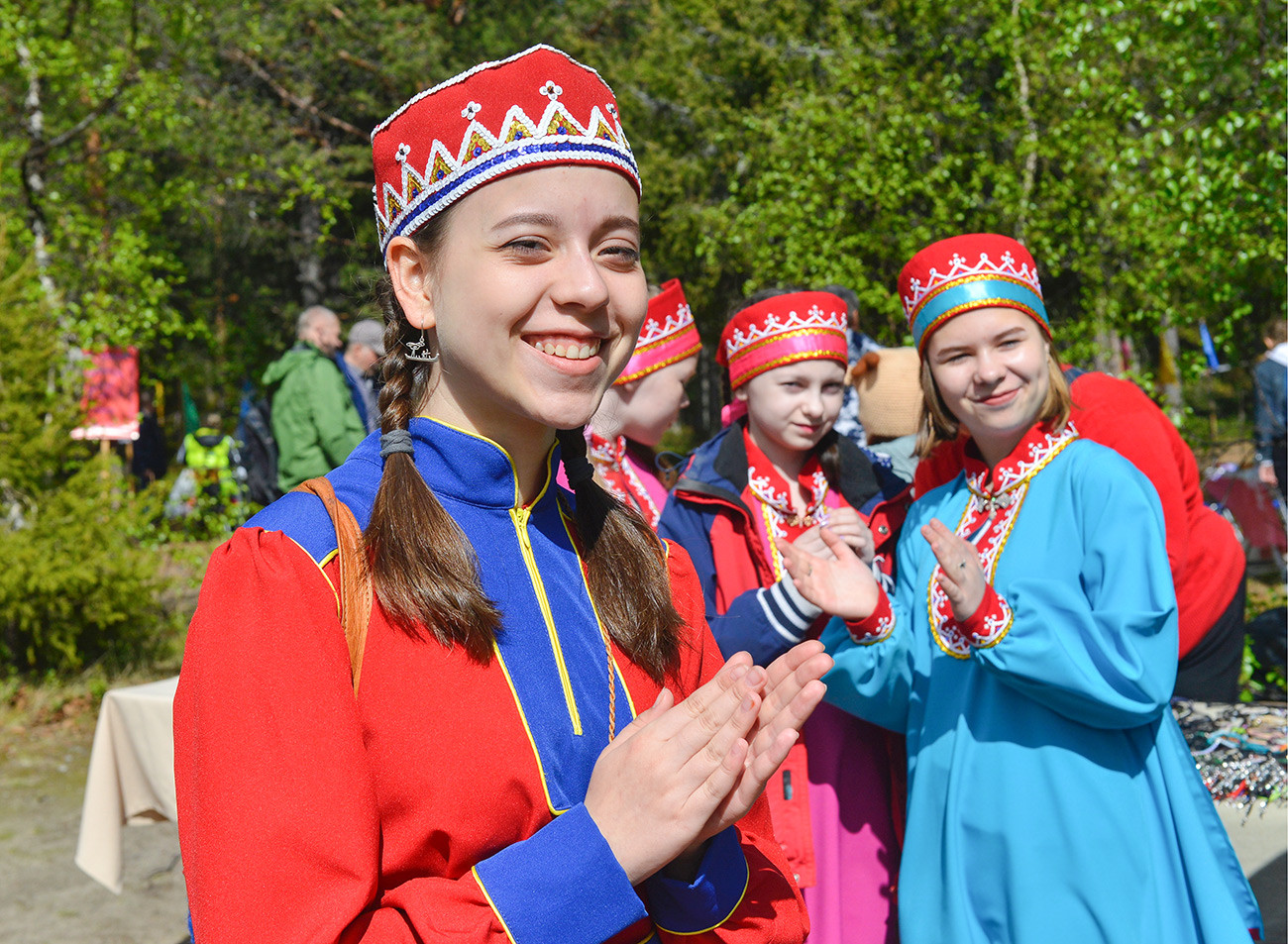 Traditionally the Sámi derive a livelihood from reindeer herding - migrating from place to place with a herd of reindeer. In the tundra they live in pointed temporary dwellings called kuvaks that are covered with reindeer hides and look similar to Nenets chums.

"I was born here, in Lovozero, and a month after I was born I was already taken to the tundra - by reindeer since there were no all-terrain vehicles at the time. My mother was a chum keeper, carrying out the housekeeping," says reindeer herder Gavril Kirilov. 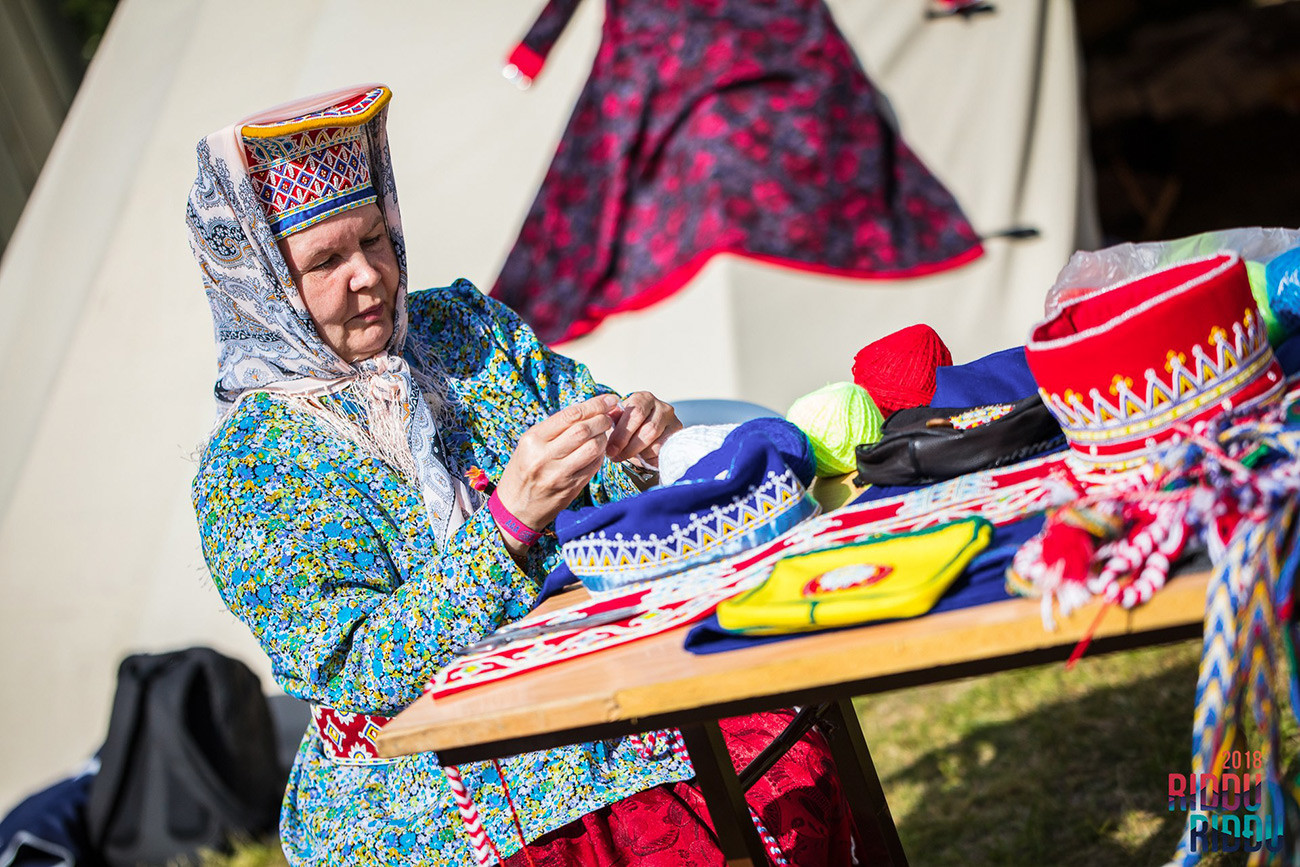 One can learn how to be a reindeer herder at the local college - it takes two years and 10 months. But the job is not well-paid - on average, 25,000 rubles ($392) a month. Reindeer herders wait a long time to be paid for the reindeer meat they sell to abattoirs, and indeed they also wait a long time to get their wages. They are no longer allowed to live in the tundra with children, as the living conditions are not suitable for the latter, who have to be temporarily sent away to boarding school.

To deal with the problems facing the Sámi, in 2008 the locals even wanted to set up a Sámi parliament like the ones that exist in Europe (the Russian Sámi try to maintain contact with the European Sámi). "We studied all the available documents thoroughly and learnt how Sámi parliaments had been set up in Finland, Norway and Sweden. Then we started preparing for a congress, looking for delegates," says Valentina Sovkina. She suggested that every Sámi village should display a Sámi flag. But the regional authorities did not support either idea - parliament or flag - describing them as separatism. The local Sámi were very angry. Sovkina wiped away tears. "We have been turned into a decorative nation that is only expected to dance. It seems it is better to keep quiet, and to sort out our problems amongst ourselves," she says. 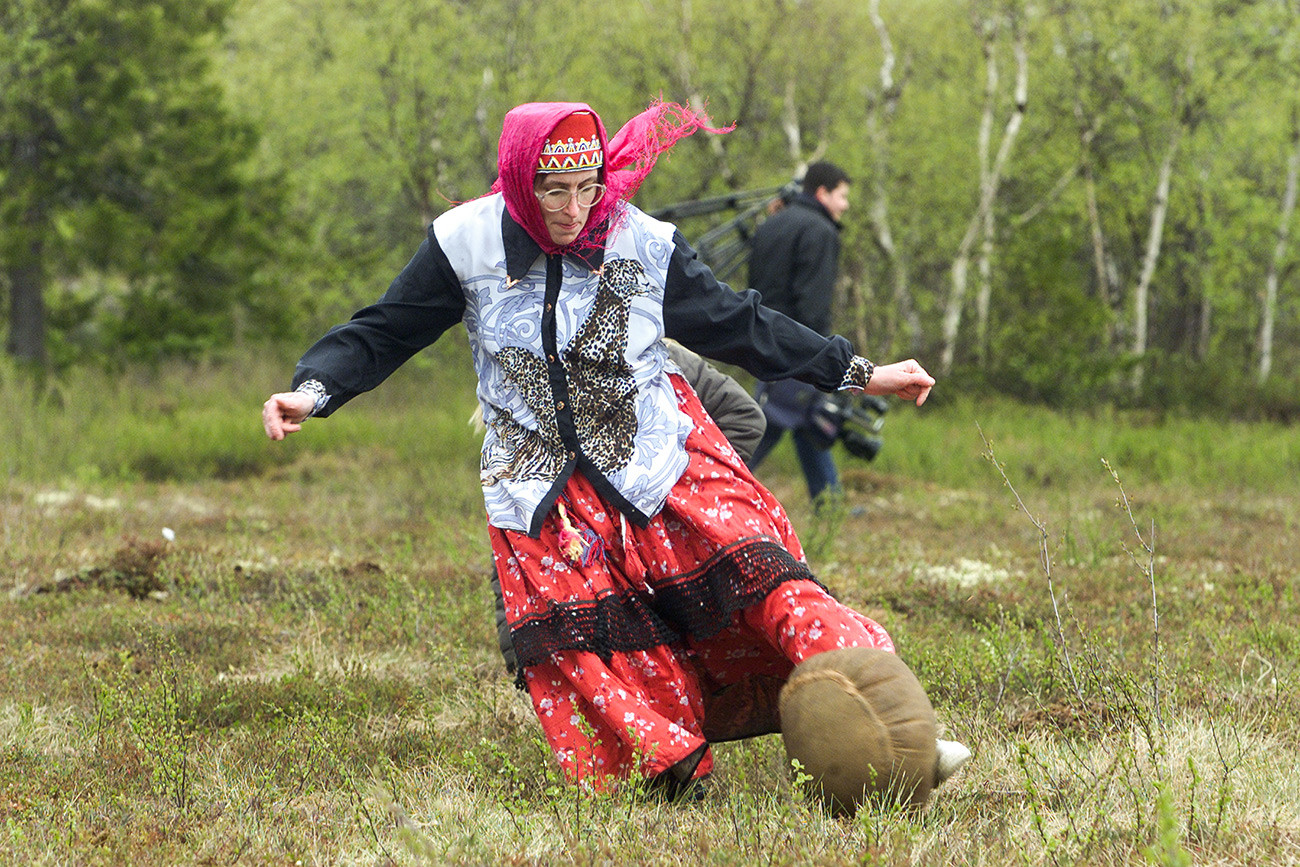 Indeed, until recently the Murmansk Region's Sámi were only remembered either on public holidays - when a Sámi ensemble in traditional clothes performs Sámi dances - or during the Sámi Games. During the latter, for example, they hold Sámi football competitions in which only women take part, using a football made of reindeer hide and fur. Everything changed in 2010. 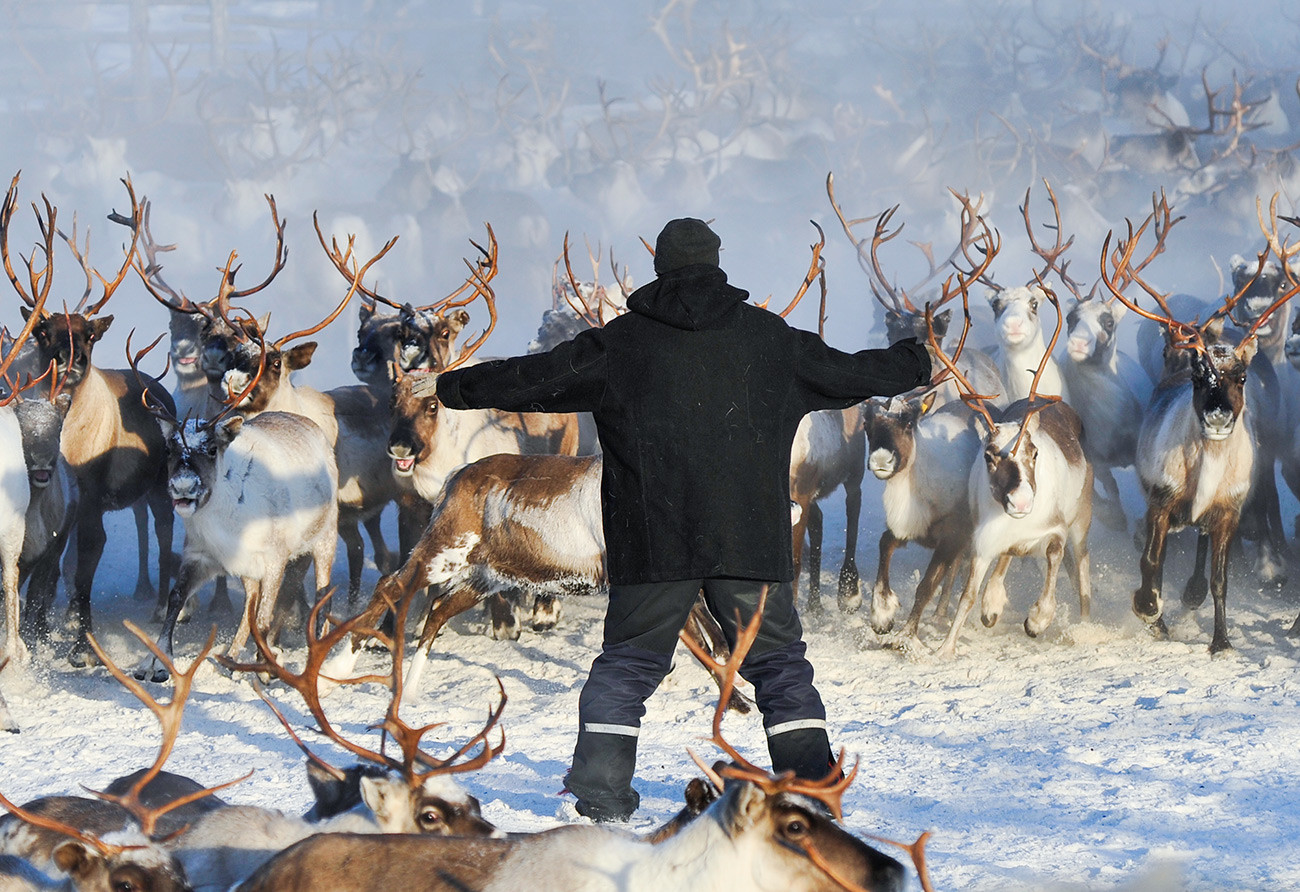 If the Sámi are needed only for entertainment, perhaps that is where their salvation lies? That is what Ivan Golovin, head of the Sámi community, thought when he decided to take a lease on 50,000 hectares of land for reindeer pastures and invited friends from Lovozero to live as a community in the way their ancestors had done. They called the place, which is 30 km from Lovozero, Sam-Syyt, translated as "Sámi village", and started making money from ethno-tourism. 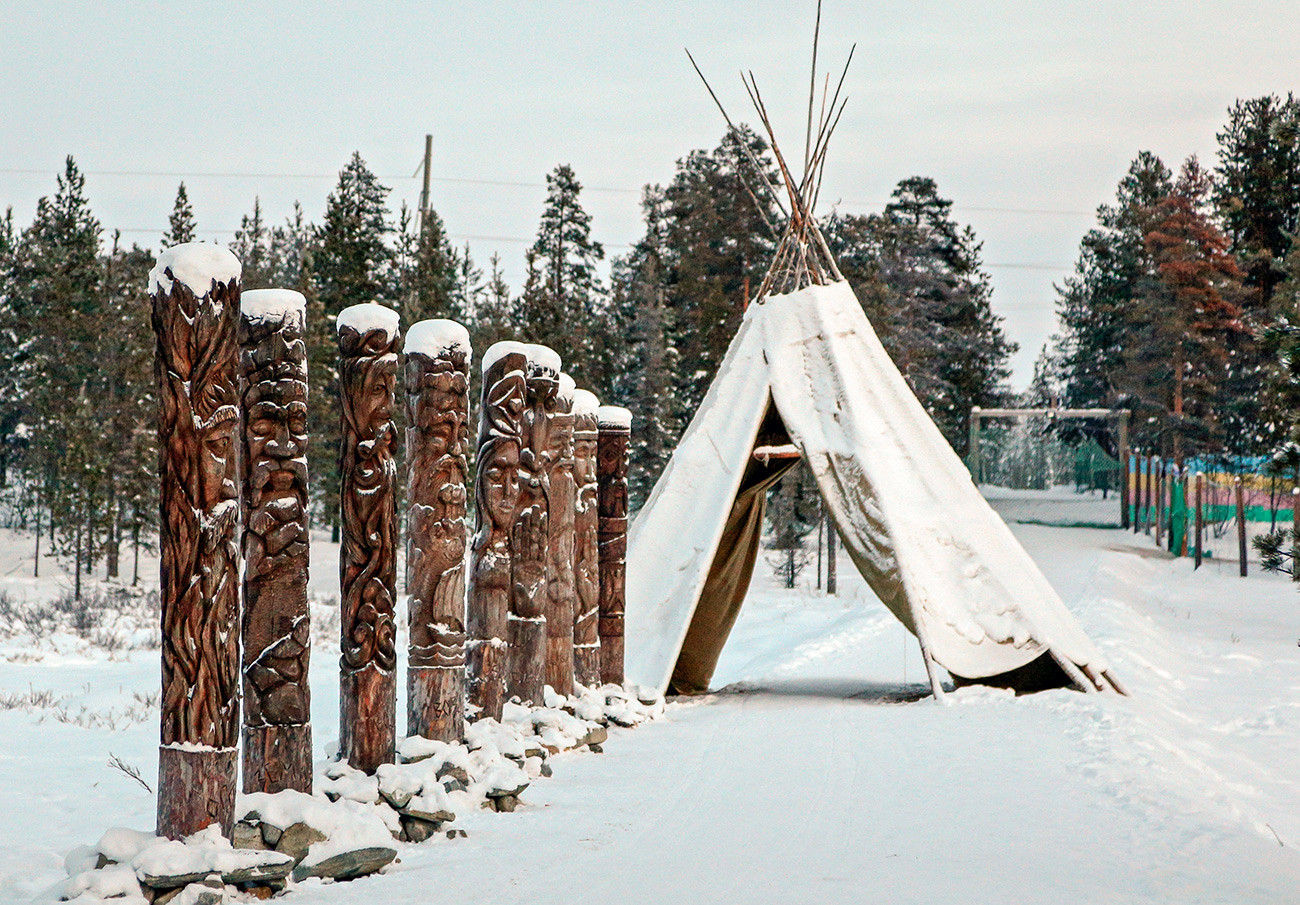 Now tourists, who like to be photographed in traditional Sámi clothes, are additionally provided with historical facts that are a little scary - such as that putting on Sámi clothes is tantamount to stealing a person's identity. "A female headdress embroidered with beads was a kind of passport for a woman, which told you whether she was married, how many children she had, where she lived and how rich her family was," says Vitaly Krut, a member of the Sámi community. It is precisely such details that people have started coming here for. 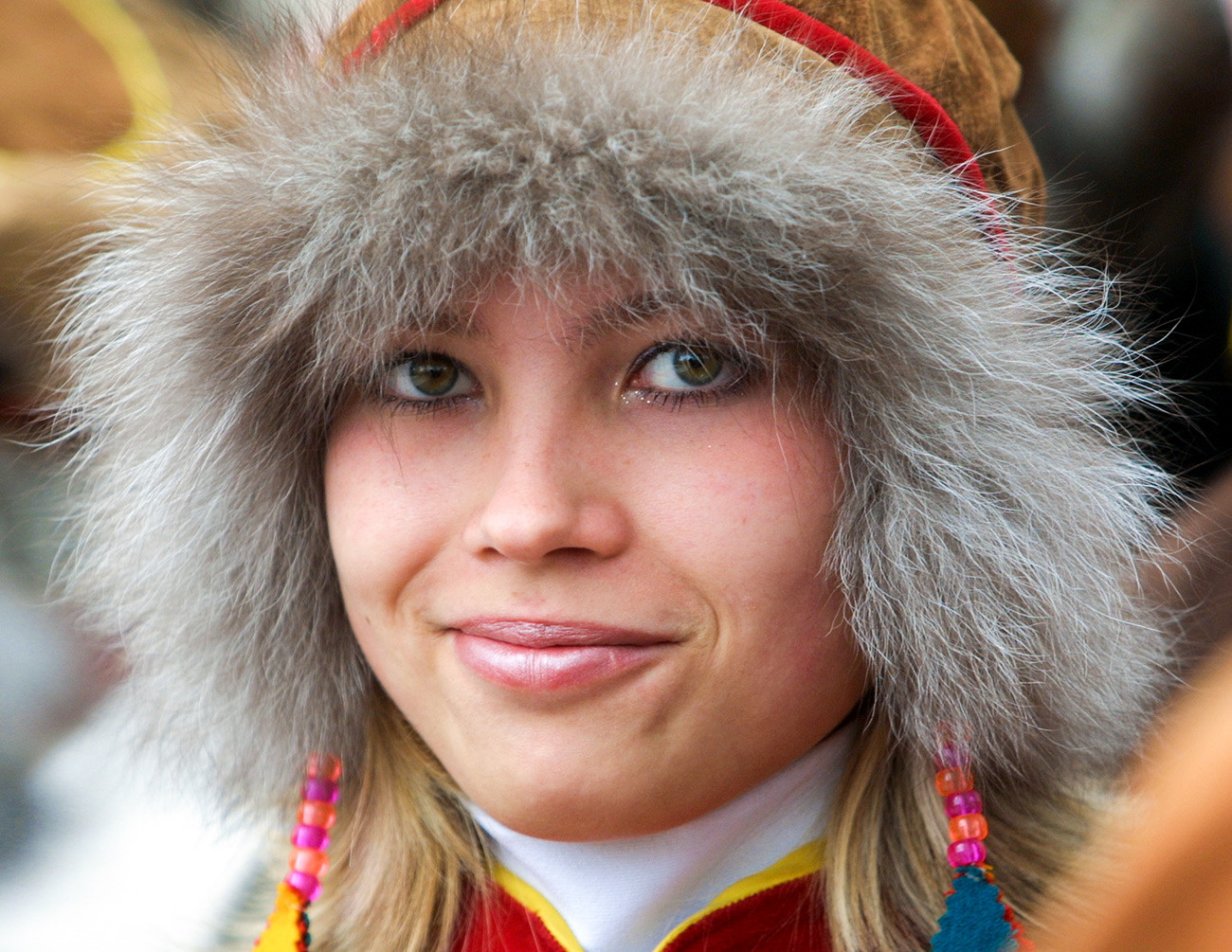 In 2017, the Sámi village was visited by over 10,500 tourists - from China, Thailand, Australia, India and Europe. The village is a living recreation of the life the Sámi have lived for centuries: There are kuvak dwellings and a shrine with wooden idols (the Sámi worship the spirits of nature). And for entertainment they have added something new - a mini-zoo with Arctic animals, lots of husky dogs, quad bikes and a ride on a reindeer sleigh in the tundra. 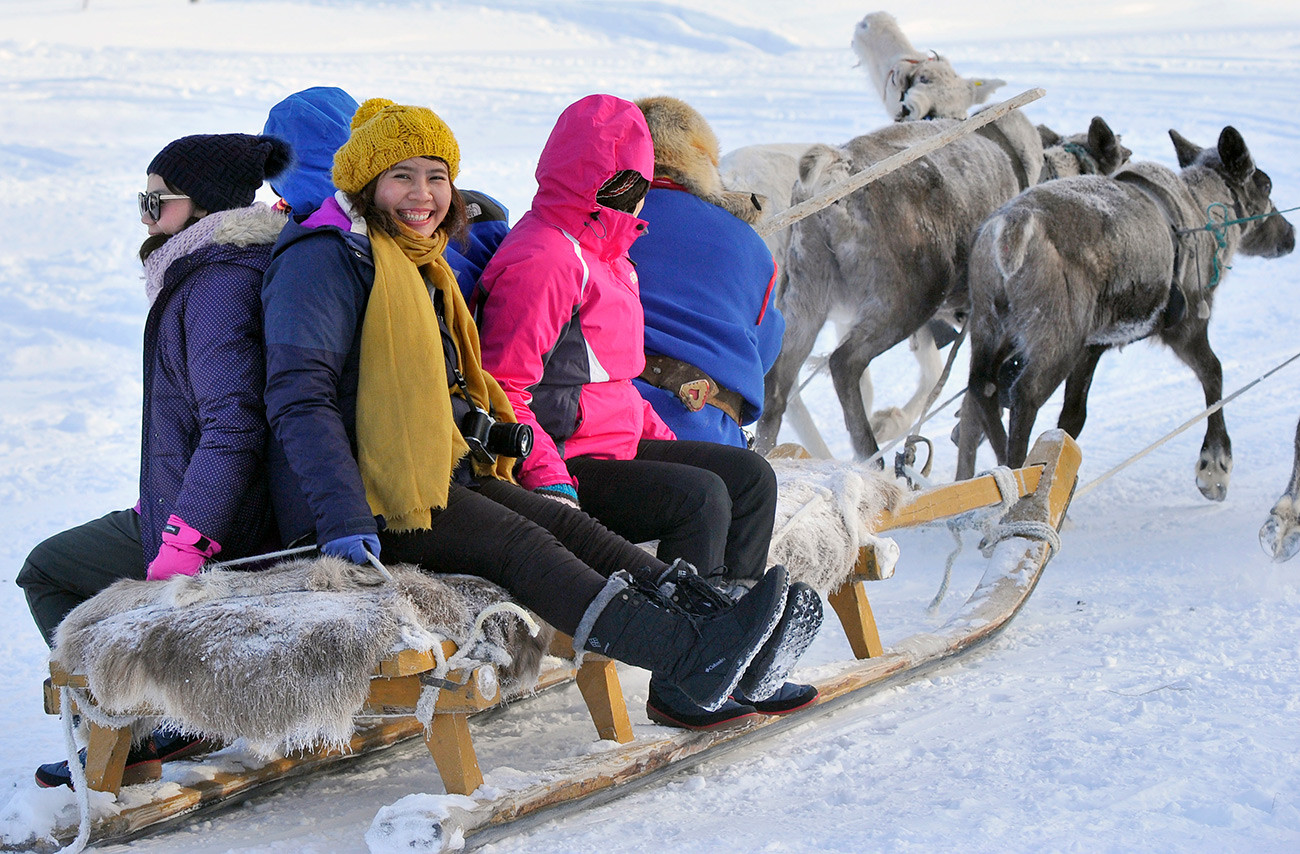 Now the Sámi hope that, if not reindeer breeding, then at least the fashionable and lucrative ethno-tourism business will be a reason for their people not to disperse around the country and to stay together. "We hope that young people will come and live here. We want to carry out a whole project: if a Sámi man marries a Sámi girl, and they have children, we shall provide them with a flat," says Golovin.

Admittedly, no little Sámi has been born in the ethno village yet. But they have finished building a hotel. 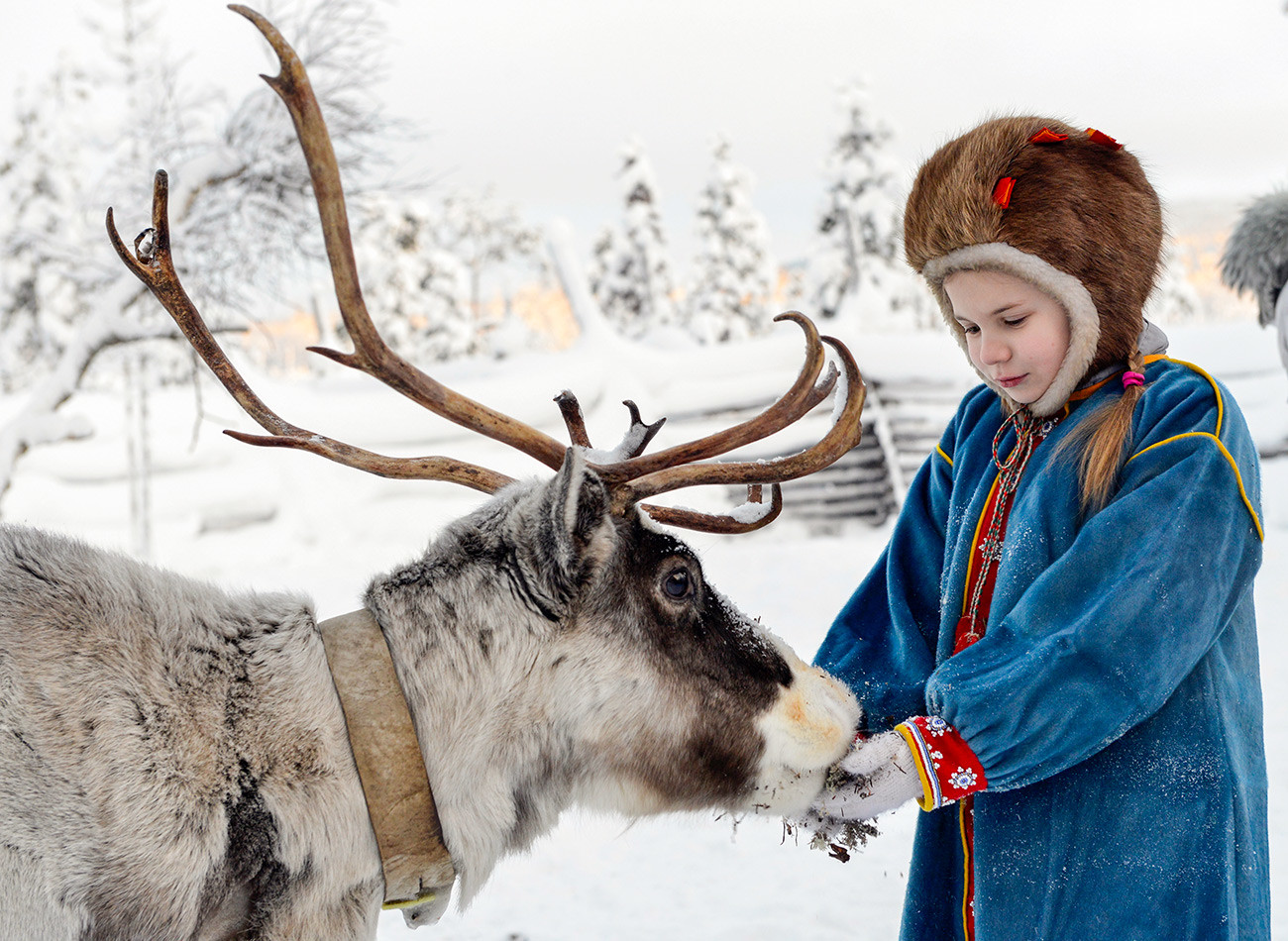