What’s the story behind the iconic Stolichnaya vodka brand? 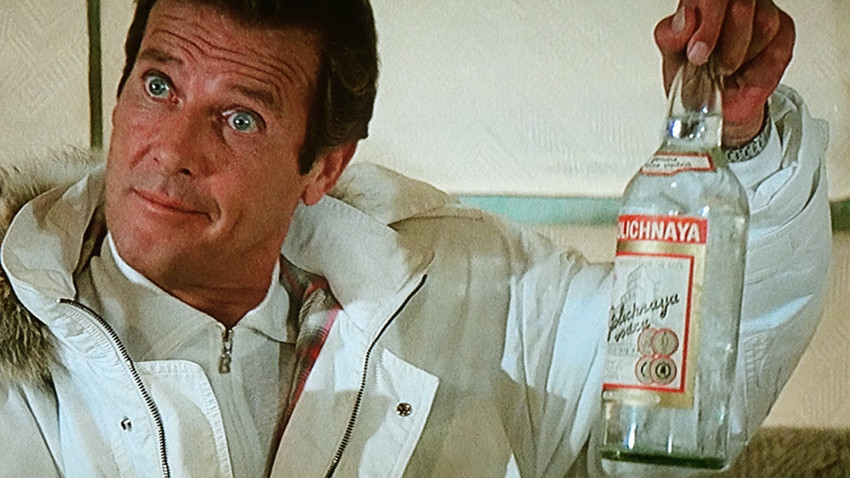 John Glen/Eon Productions, 1985
The 1970s saw the first Russian vodka appear on American shelves. And it was all thanks to PepsiCo.

If one thinks about Russian vodka, Stolichnaya (or Stoli) is one of the key brands that pops to mind. For decades now, it’s been popular both in Russia and abroad. But what do we actually know about its long history?

From USSR to USA

Stolichnaya is not only one of the most famous but also one of the oldest vodka brands in Russia. There are several versions of its birthdate (dating between 1938-1953) but Russia’s state-owned Sojuzplodoimport claims that everything started in 1938 when Soviet specialists invented the original recipe of this premium vodka made of wheat and rye grain. Sojuzplodoimport (which has been the main owner of the brand) claims that the first Stolichnaya bottles were produced in 1941, in besieged Leningrad, with mass production starting in 1943. 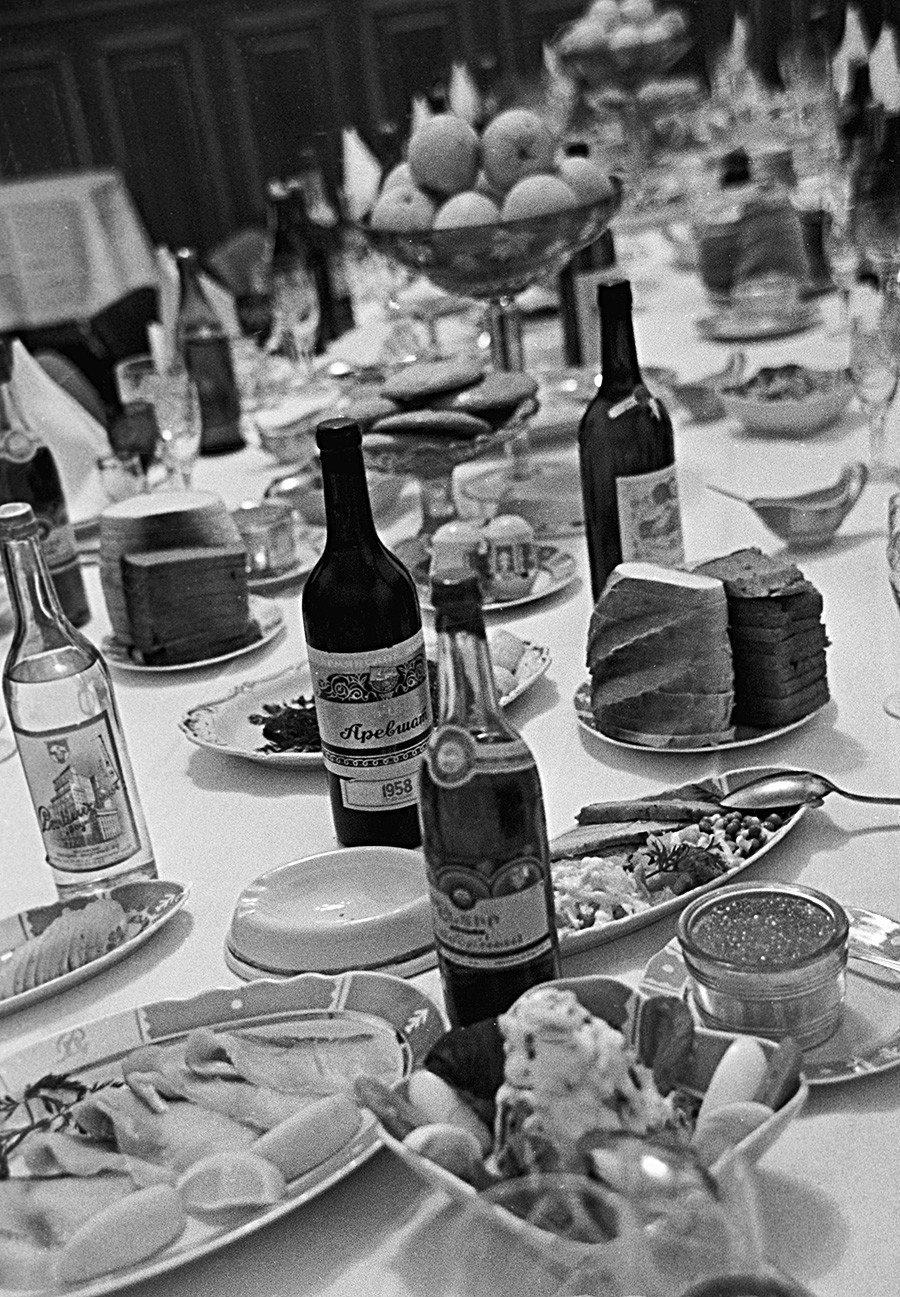 A party table with cold appetizers (one can spot the bottle of Stolichnaya on the left). 1963

But the Moscow State Wine Warehouse №1 (the Moscow Distillery Cristall) opposes this version stating that it was here where the recipe was invented in 1940, thanks to the top class distiller and process engineer, Victor Grigoryevich Svirida. His name as the main inventor of Stolichnaya appears in many sources.

The prices for Stolichnaya were rather high compared to other vodka bottles - after the financial reform in 1961 its price reached 3 rubles 12 сopecks or around $2.13 (90 copecks were worth $1 at the time). So Stolichnaya was considered a premium vodka, only for those who could afford it. 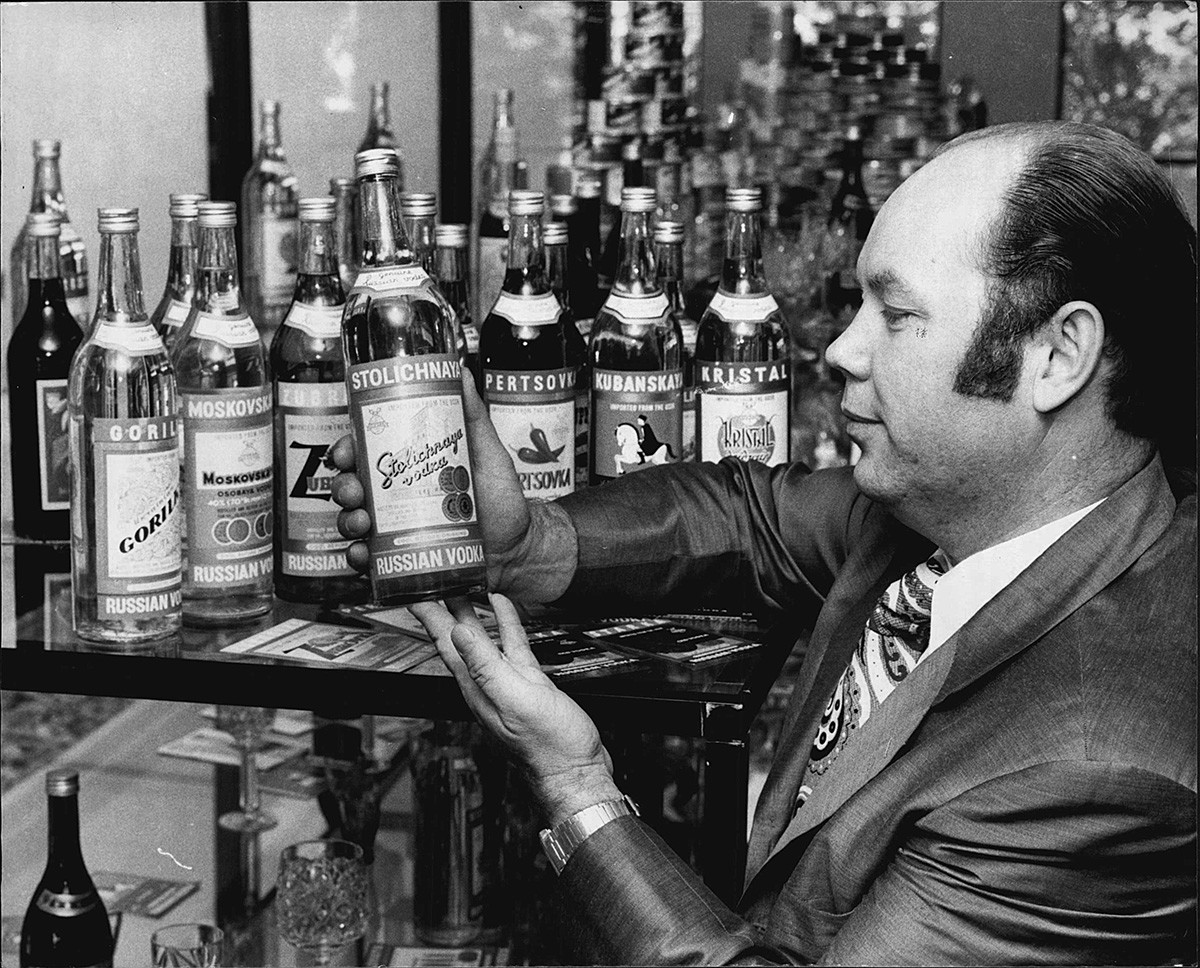 Over the years, it overtook Smirnoff in a blind test in 1954, received a number of international awards, including a gold medal in 1958 at the Brussels World’s Fair and International Exhibition, and another gold at the Leipziger Messe in 1963. 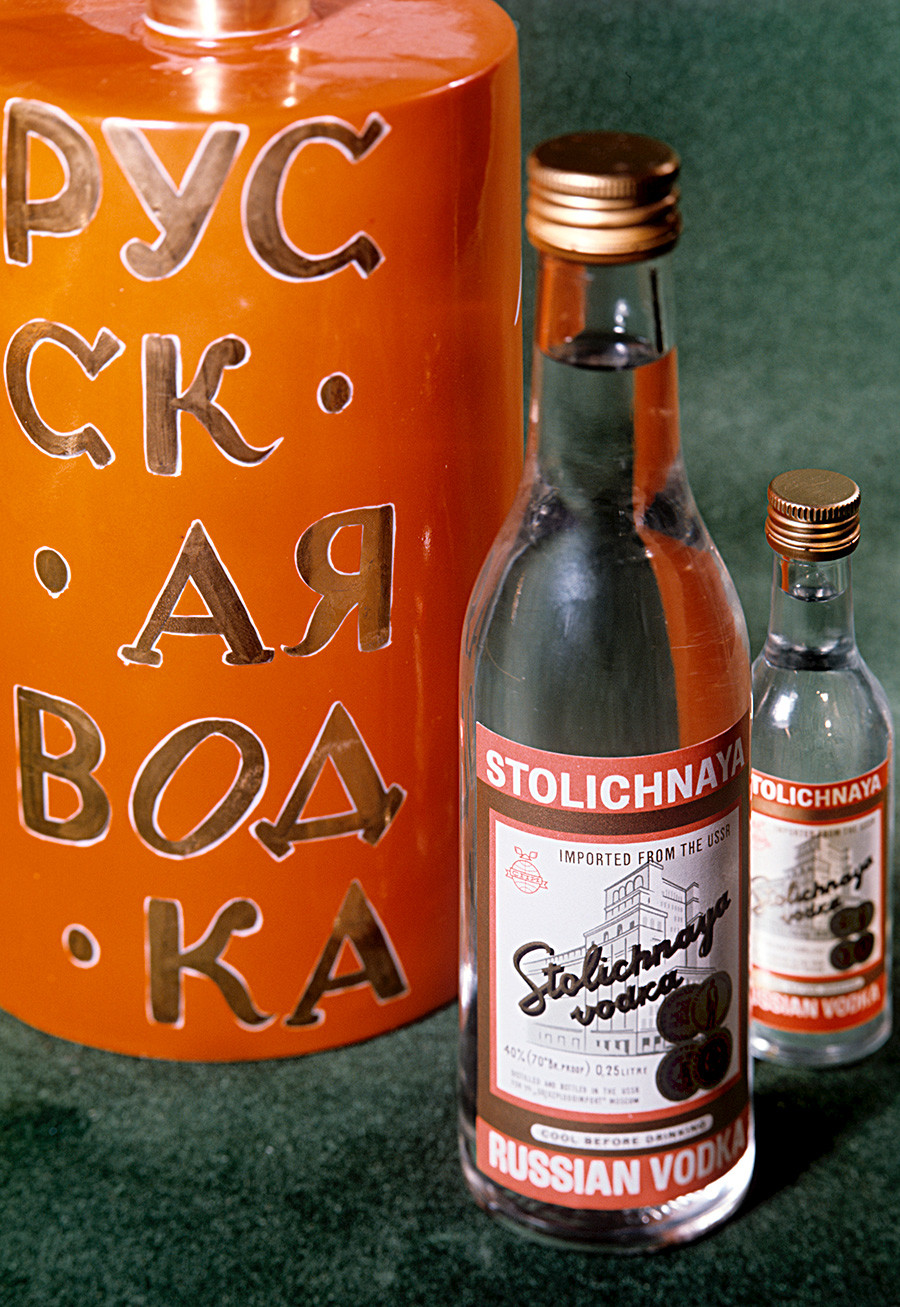 Stolichnaya vodka from the Moscow Liqueur and Vodka Distillery. 1970

In 1972, Stolichnaya became the first premium vodka to be imported to the American market. U.S. PepsiCo got a monopoly on selling it across the Atlantic thanks to a barter deal it made with the Soviets in exchange for Pepsi concentrate and production capacities. It marked a real rise for Stolichnaya in the U.S. which promoted it with the motto “Only vodka from Russia is genuine Russian vodka!”.

Since then “Stoli” got known as one of the main symbols of Russia and secured millions of dollars in profits for the USSR. By 1990, Stolichnaya vodka was being exported to 90 countries.

The battle for rights 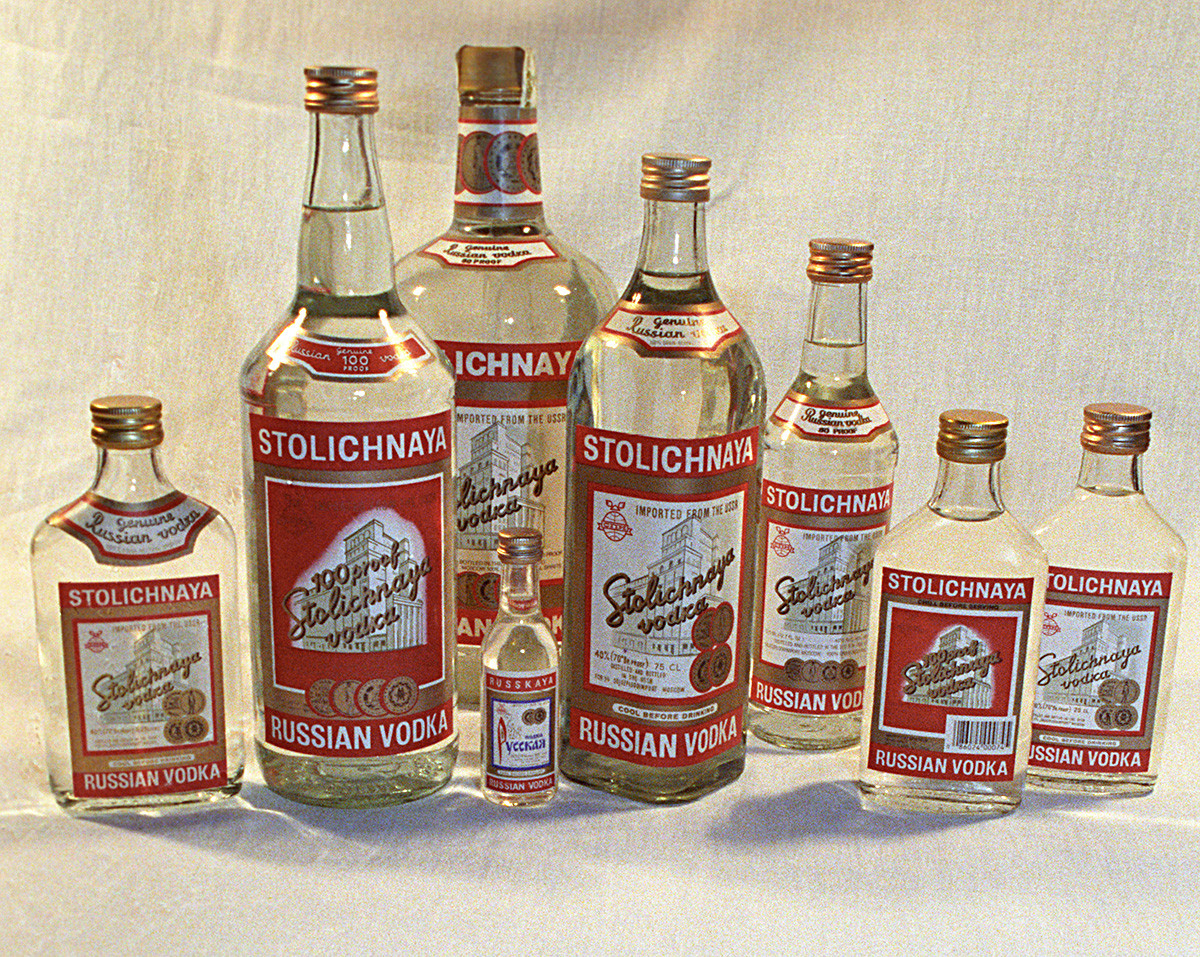 With the collapse of the Soviet Union and the chaos that followed, the Stolichnaya trademark ceased to exist. In 1991, the USSR Gospatent in charge of intellectual property basically left it without any protection, transforming the brand into a simple name for a group of products that basically allowed anyone to produce it, with different levels of quality and labels.

In the mid-90s, the authorities tried to control the situation and the trademark subsequently returned to Sojuzplodoimport (a legal successor of the former state-run entity) and all would be well, had one of its key shareholders, Yuri Shefler, not had other plans.

In 1997, he created a firm with almost the same name - Sojuzplodimport - acquired Stolichnaya with some other trademarks below market price, sold them to his other entity (Spirits International, in the Netherlands) and basically turned the production of Stolichnaya into an international private business, which later received a new name - S.P.I. Group. 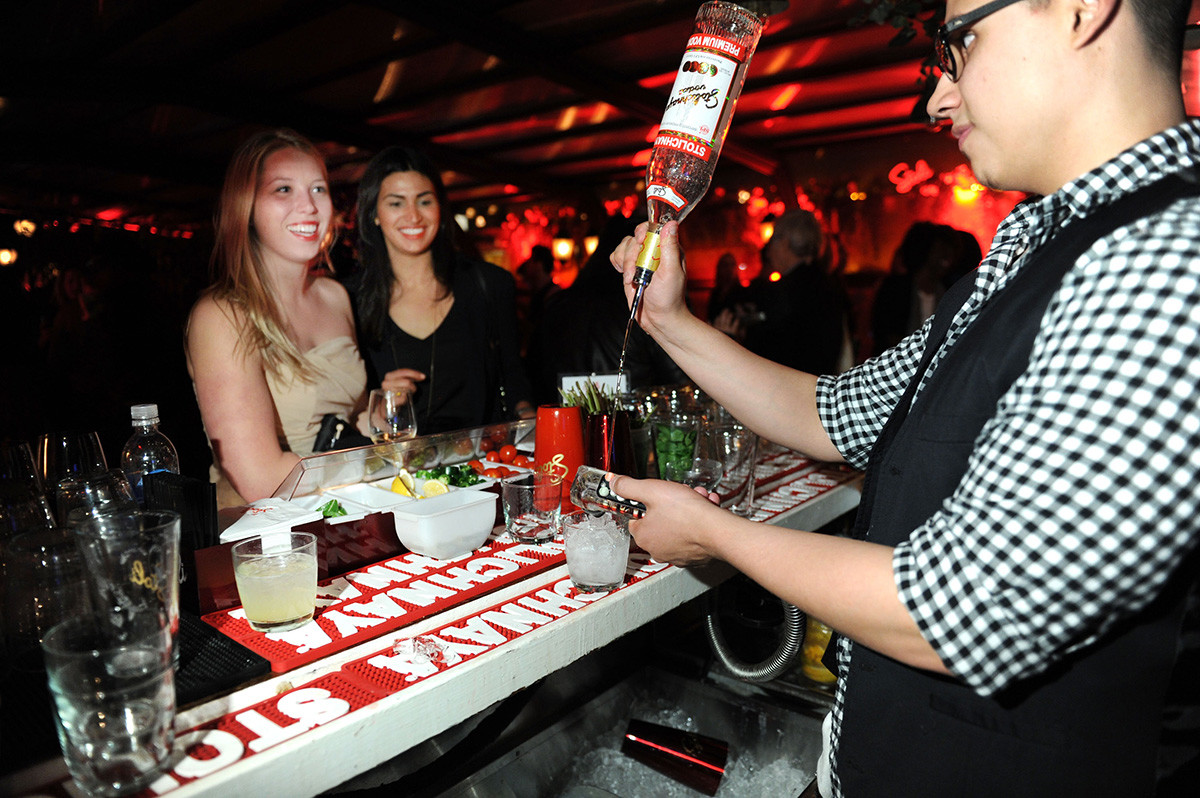 As the years went by, Shefler’s company faced legal charges in Russia, and in 2001, he had to flee the country, but kept making millions on Stoli sales and other previously Russian spirit names.

For the last 20 years, Sojuzplodoimport and the exiled billionaire have been locked in battle for the rights over Stolichnaya in foreign courts, and in 2018, the Dutch court ruled that the rights to the vodka belong to Sojuzplodoimport, and S.P.I. Group must repay all the profits made on the Benelux market since 1999.

Shefler appealed the decision, but in January this year it was denied. A positive sign for Russia, but nowhere closer to an end to the dispute, S.P.I. Group today holds the rights to several Stolichnaya trademarks in 13 EU countries, and is preparing to defend them in the near future.