How Russia liberated the Balkans 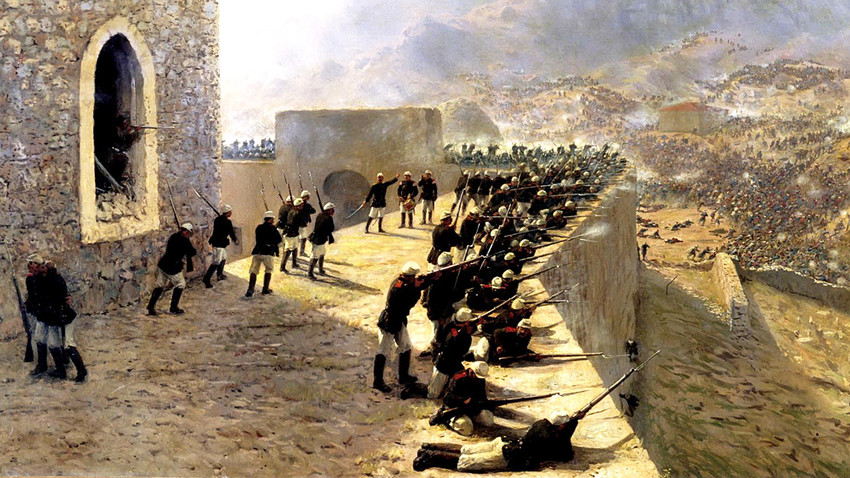 Central Military Historical Museum of Artillery, Engineers and Signal Corps, St. Petersburg, Russia
The Russia's victory over the Turks gave it influence over the Balkans and direct access to the Mediterranean. But the British, as so often happened, spoiled the party.

“Christians are being exterminated by the tens and hundreds of thousands, uprooted and wiped from the face of the Earth. Sisters are dishonored in front of their dying brothers, infant children are tossed up and caught on a bayonet in front of their mothers; villages are being destroyed, churches smashed to splinters,” is Fyodor Dostoevsky’s emotionally charged reaction to the Turks’ brutal suppression of the Bulgarian uprising in April 1876. 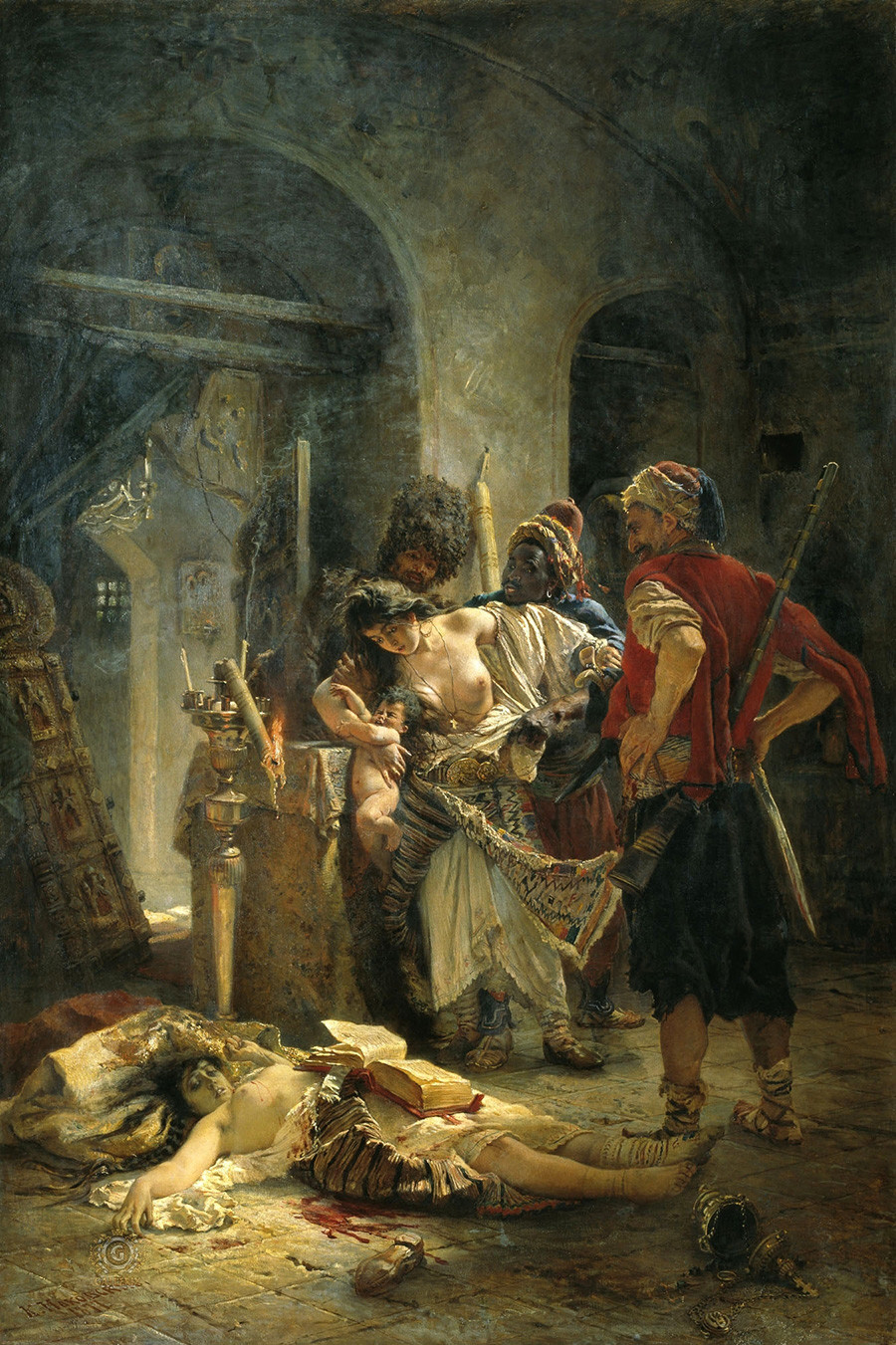 By the late 19th century, the Ottoman Empire was a shadow of its former power and glory. Although they were not yet officially recognized worldwide, the vassal states of Romania, Serbia, and Montenegro were already de facto independent of the sultans. The Bulgarians, however, were less fortunate. Living in the immediate vicinity of the heart of the Sublime Porte (as the Ottoman court at Istanbul was known), they were unable to resurrect their state, and all attempts at liberation were bloodily and violently suppressed. 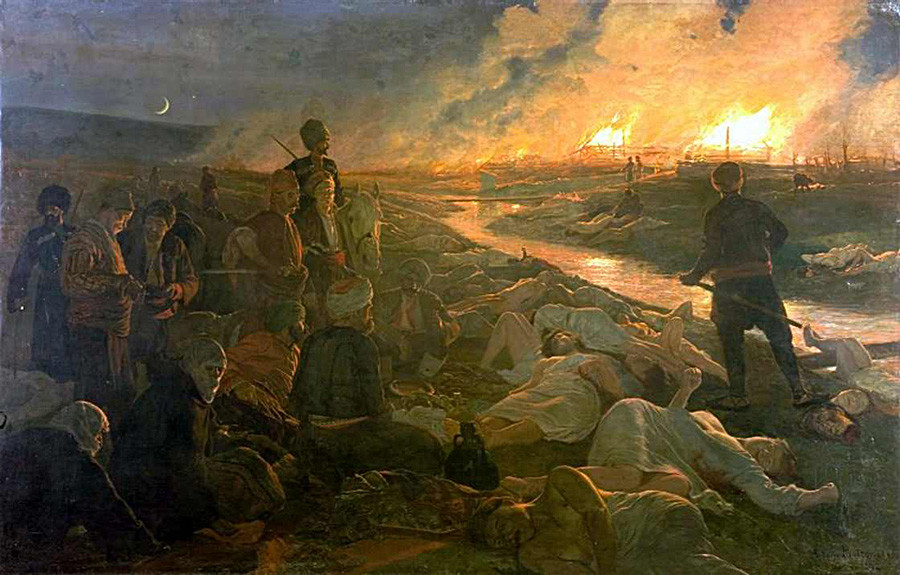 The cruelty meted out to the Bulgarians provoked a wave of indignation around the world, including in the Russian Empire. When, in October 1876, Serbia and Montenegro declared war on the Ottoman Empire, more than 5,000 Russian volunteers set off to fight the Turks. “The landowner, the peasant, the retired soldier, the officer all went to war, where Russian blood was spilled on top of the blood of our Serb brothers,” wrote an unnamed contemporary of those events. (S. Kochukov. A Russian Soldier in the Balkan Crisis of the mid-1870s. Saratov, 2011.) The war, however, ended in defeat for the allies. 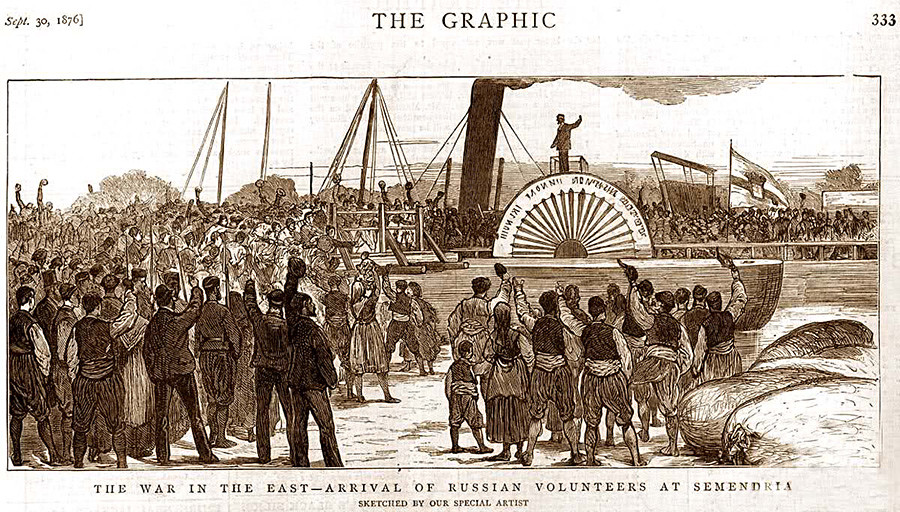 Arrival of Russian volunteers at Semendria, Serbia. The Graphic, Sept. 30, 1876

The following year, Russia officially began to wage war against the Turks. The driving force was not the state authorities, but the public, which literally forced Tsar Alexander II to fulfill his moral duty to the fraternal people of the Balkans and punish the cruel Turks. “To war! We are stronger than everyone!” exhorted that selfsame Dostoevsky. 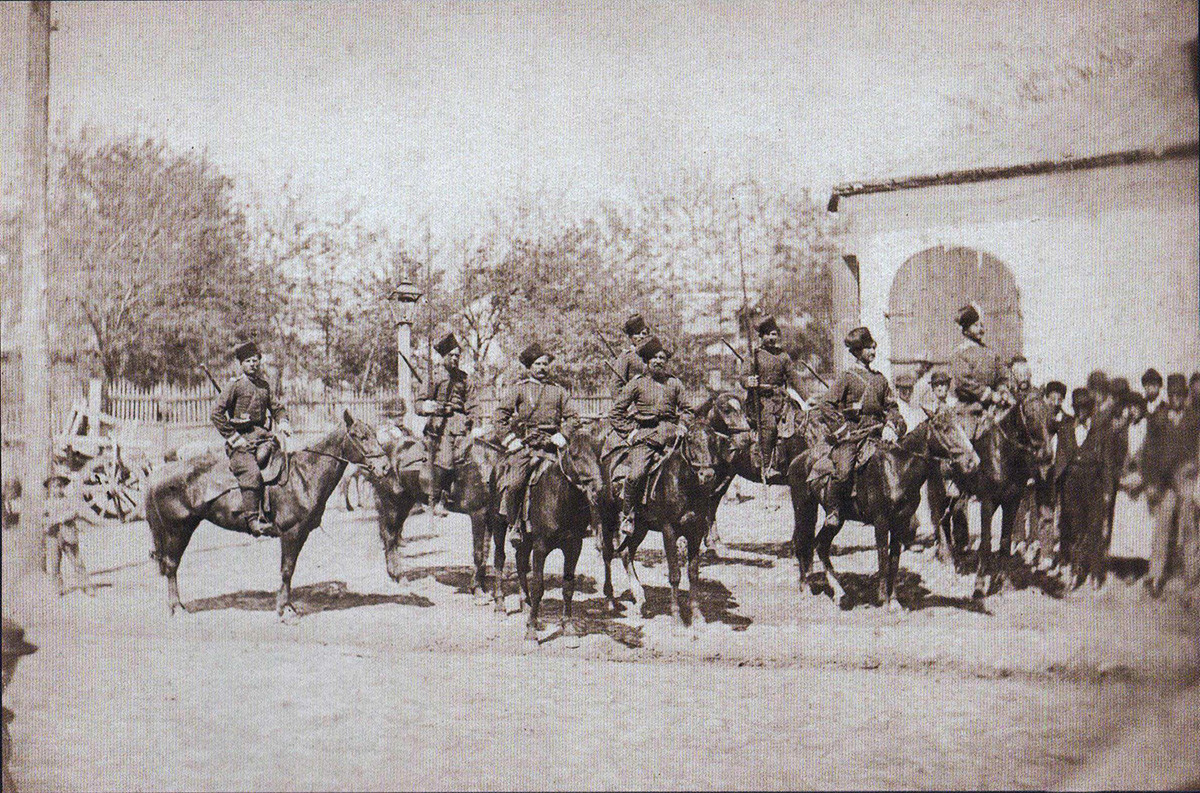 A detachment of Don Kossaks in front of Emperor's residence in Ploiești, Romania.

On April 24, 1877, a 200,000-strong Russian army, together with six Bulgarian volunteer units, entered allied Romania with a view to crossing the Danube into Ottoman Bulgaria. “To wrest Bulgaria from the arms of the Turks, who have committed so many atrocities in this country,” is how the war objective was formulated in official documents of the Russian General Staff. (The Russo-Turkish War: The Russian and Bulgarian Viewpoint. 1877-1878. Collection of Memoirs. Moscow, 2017) 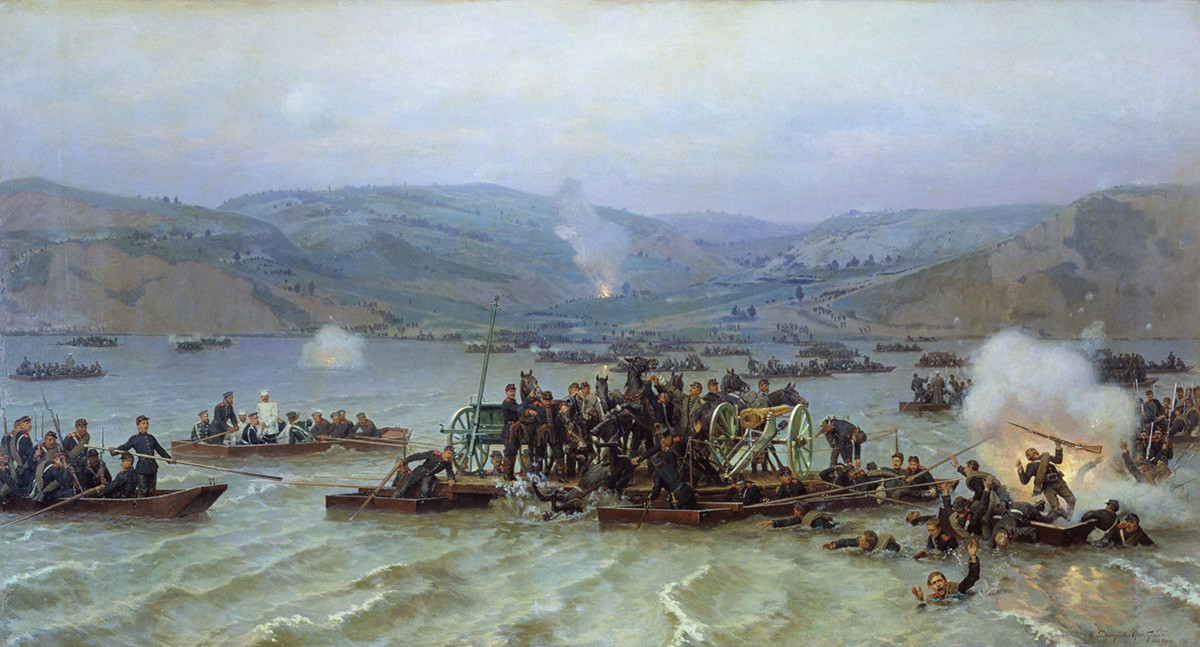 Nikolai Dmitriev-Orenburgsky. Crossing of the Russian army over the Danube at Zimnicea/Svishtov, June 15, 1877 (1883)

The first period of the war was successful for the Russian army. The tsar’s troops quickly seized the strategically important fortress of Nikopol, and reached the vital Shipka Pass through the Balkan mountain range, which effectively opened a direct route to Constantinople (Istanbul). 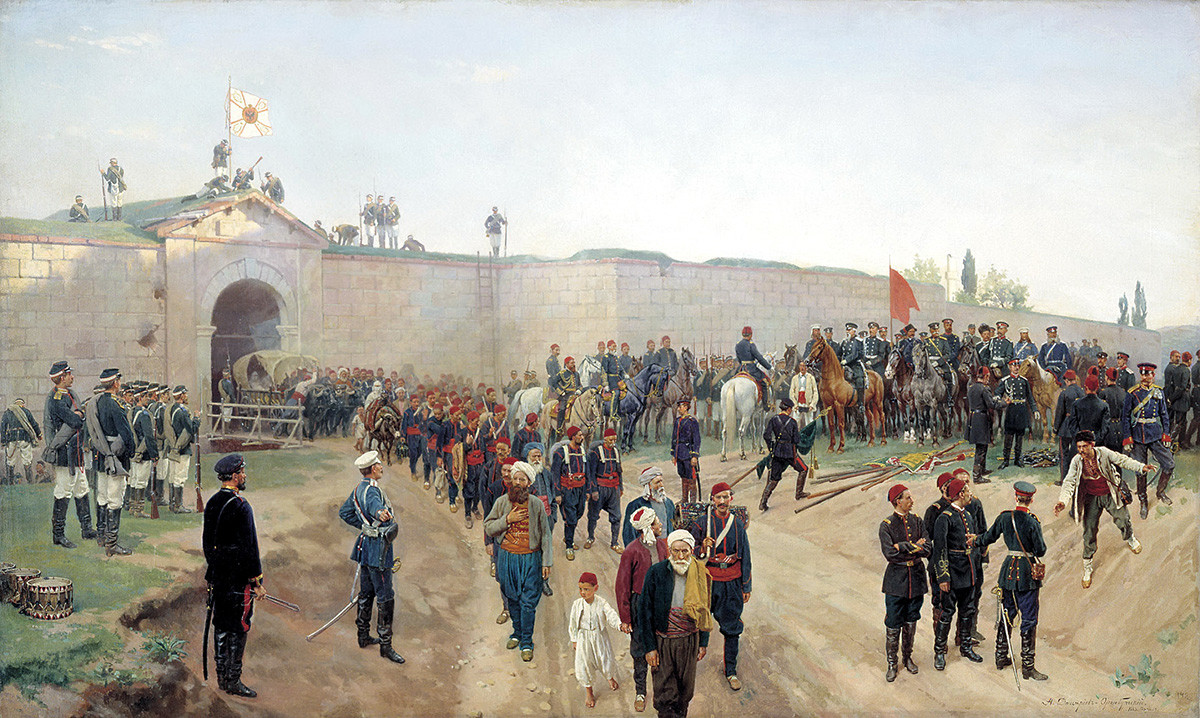 However, the Russian forces were not strong enough for a decisive offensive on the capital. Moreover, an unpleasant surprise lay in store. A 20,000-strong Turkish army under Osman Pasha unexpectedly occupied the city of Plevna (now Pleven), impeding the Russian advance and threatening the crossing of the Danube. “If the Turks were more mobile, our army would at best be driven out of the river, and at worst drowned in it,” wrote the famous war artist Vasily Vereshchagin, who took part in the campaign. 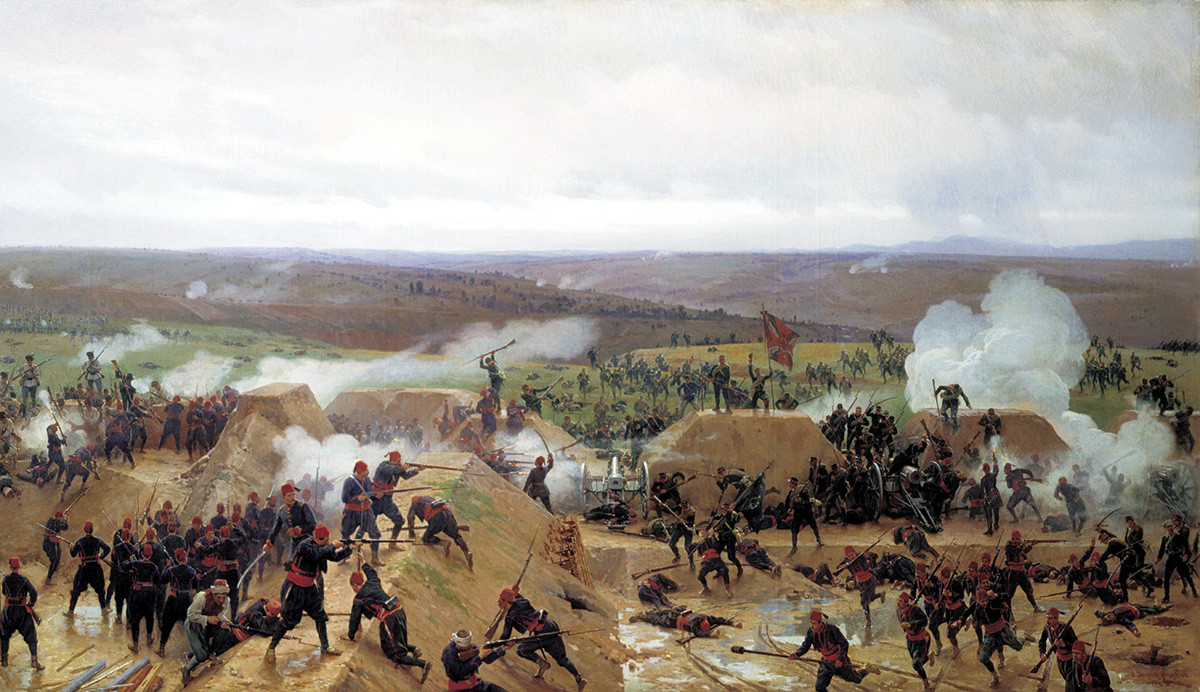 The fighting took place not only in the Balkans, but in the Caucasus too. However, with the main focus on Bulgaria, both the Russian and Ottoman empires considered it a secondary battleground. The most heroic episode in that theater was the defense of the fortress of Bayazet (now Dogubeyazıt) by a small Russian garrison of 1,500 men. For 23 days, it repelled the attacks of the 20,000-strong enemy, before being relieved. 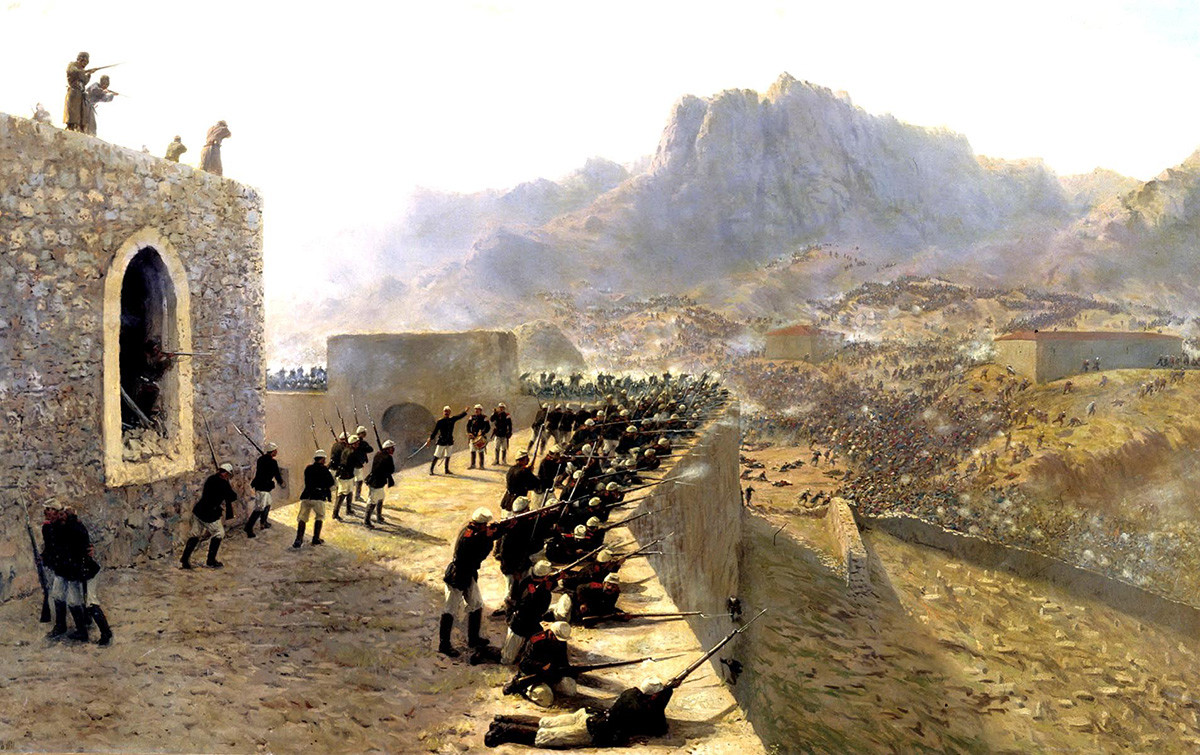 August 1877, when the Turks tried to retake the initiative, was a real test for the Russian army. The 40,000-strong Turkish army attacked the Shipka Pass, which was defended by a Russian-Bulgarian detachment of just 7,000. With heavy losses for themselves (2,500) and for the enemy (6,000), the defenders repulsed the onslaught. 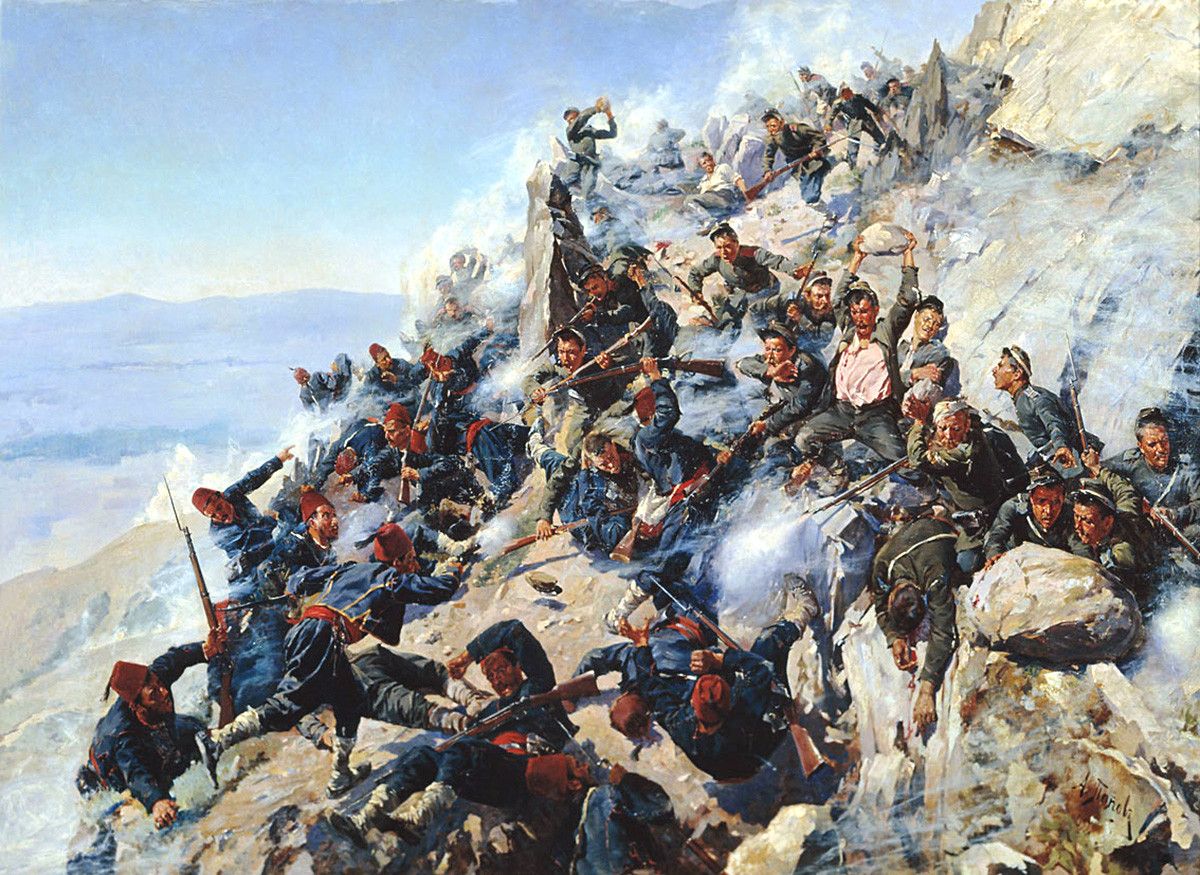 The key element in the Russo-Turkish confrontation remained Plevna. The Ottoman-held city, having survived several bloody assaults, resisted until the beginning of winter until Russian troops cut off the Sofia road which supplied the garrison. On Dec. 10, Osman Pasha capitulated after a failed attempt to break out. 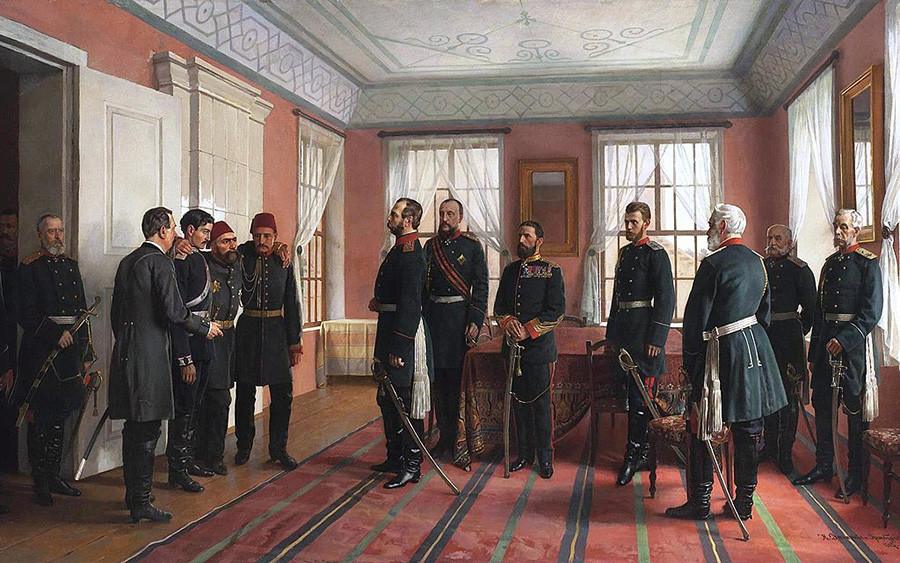 Nikolai Dmitriev-Orenburgsky. Introduction of the Captive Osman Pasha to Alexander II at Plevna (1898)

Having finally taken Plevna, instead of seeing out the winter, the Russian command unexpectedly mounted a large-scale offensive on all fronts. The decision was motivated by the allies’ overwhelming numerical superiority: 554,000 Russians and 47,000 Romanian troops against 183,000 Turks. Moreover, after the fall of Plevna, Serbia had re-entered the war. 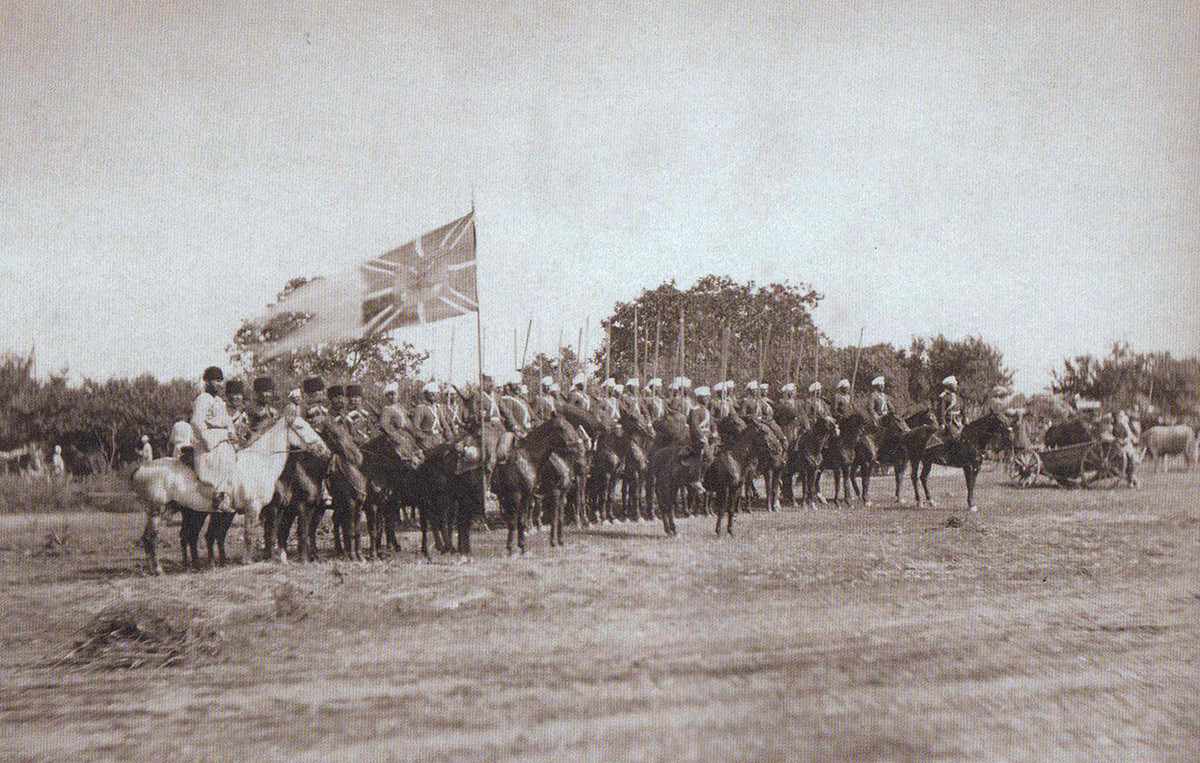 Great Prince Alexander Aleksandrovich with his Cossack convoy after the capture if Plevna.

During the offensive, the Turks were routed at Philippopolis (now Plovdiv) and abandoned Adrianople (Edirne) without a fight, and Russian troops came within touching distance of Constantinople. It was then that Britain intervened in the conflict, declaring the occupation (albeit temporary) of the Ottoman capital to be unacceptable. On Feb. 13, 1878, a squadron under the command of Admiral Hornby, consisting of six battleships and a frigate, sailed into the Dardanelles and anchored in the Sea of ​​Marmara. 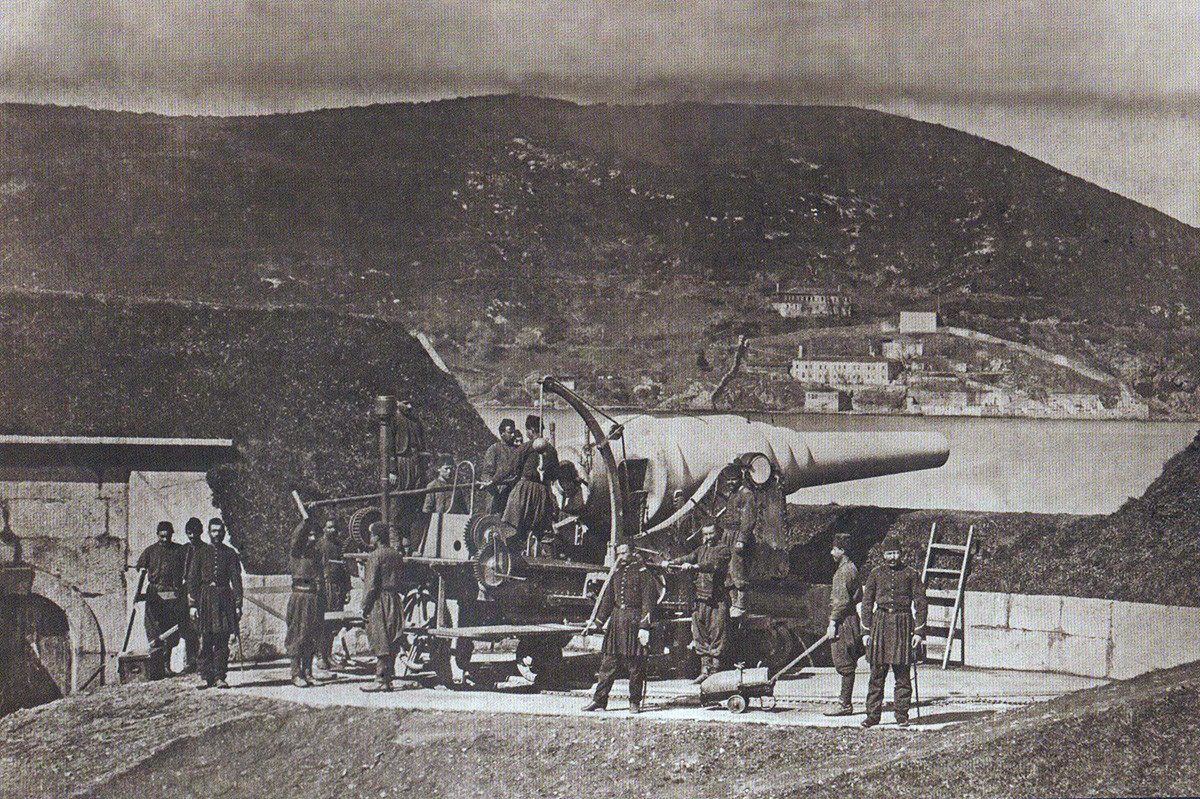 Russia, not ready for a full-blown war with the British, made peace with the Turks on March 3, 1878, in the village of San Stefano. Under the treaty, the Ottoman Empire ceded part of its territories in the Caucasus and the Balkans to Russia, and granted independence to Romania, Serbia, and Montenegro, as well as autonomy to Bosnia and Herzegovina. However, the main condition for peace was the reconstitution of the Bulgarian state, which included extensive territories from the Black to the Aegean Sea. For the first few years of its new existence, Bulgaria was to be under direct Russian control. 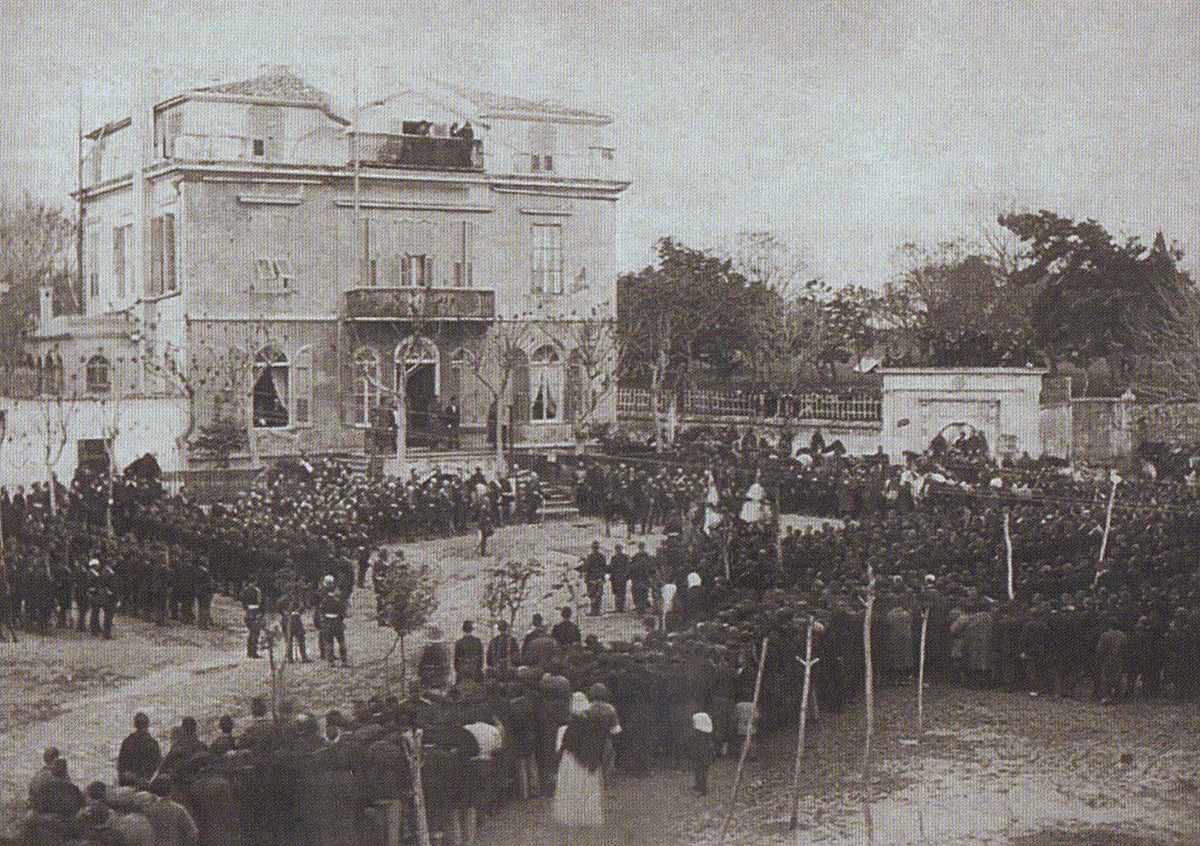 The signing of the treaty of San Stefano

The European powers were shocked by Russia’s newfound hegemony in the Balkans. It now had free access to the Mediterranean through its Bulgarian satellite. A British-inspired anti-Russian coalition was rapidly formed, in response to which the Russian ambassador to Constantinople Nikolai Ignatyev commented: “Europe merely allowed us to fight the Turks and spill Russian blood and treasure, but not to extract any benefit at our own discretion, either for ourselves or for our co-religionists.” (The Russo-Turkish War: The Russian and Bulgarian Viewpoint. 1877-1878. Collection of Memoirs. Moscow, 2017) 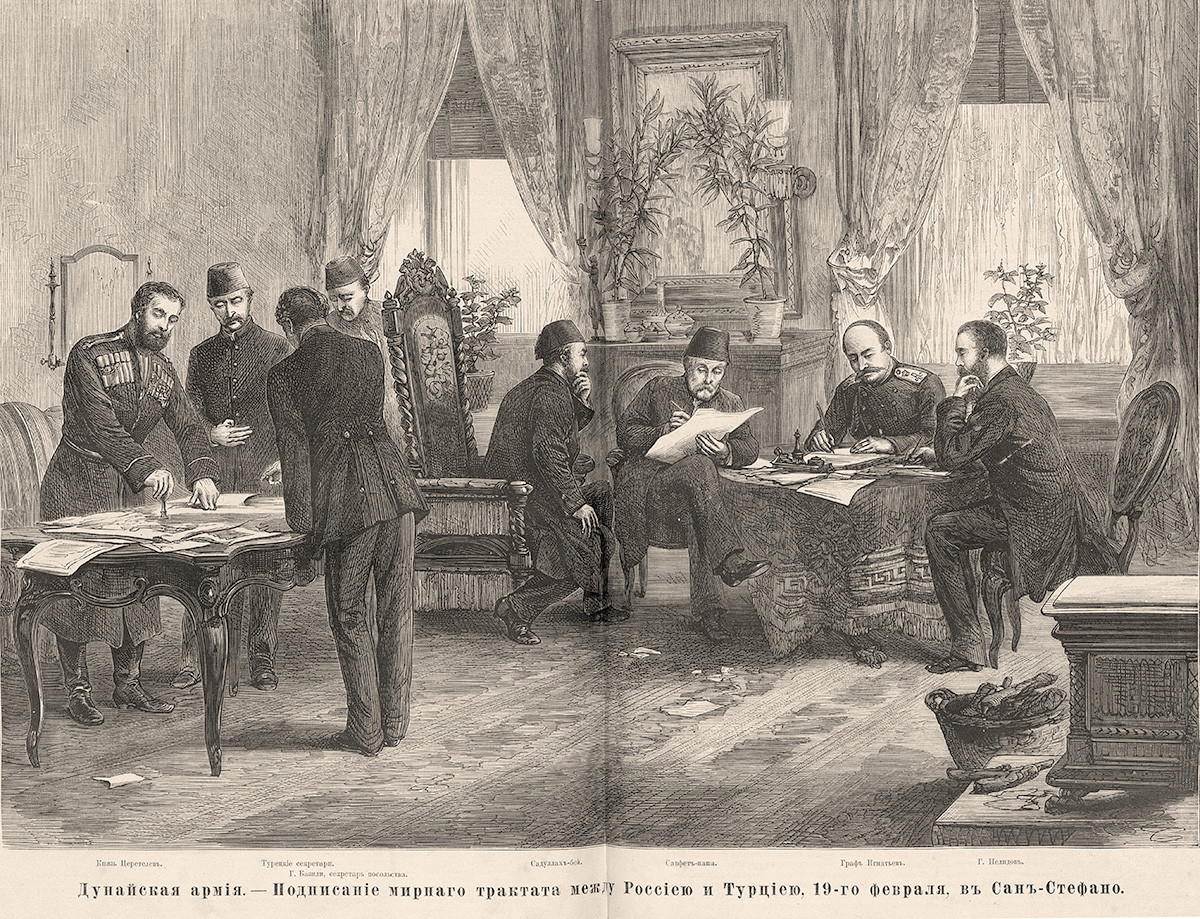 The signing of the treaty of San Stefano

Facing the threat of war against a united Europe, Russia was forced to revise the terms of the Treaty of San Stefano at an international congress in Berlin before the year 1878 was through. The independence of Romania, Serbia, and Montenegro was reaffirmed, although their territorial claims were severely curtailed. And instead of autonomy, Bosnia and Herzegovina were placed under the “temporary” occupation of Austro-Hungary. Less than 20 years later, the region officially passed to Vienna. 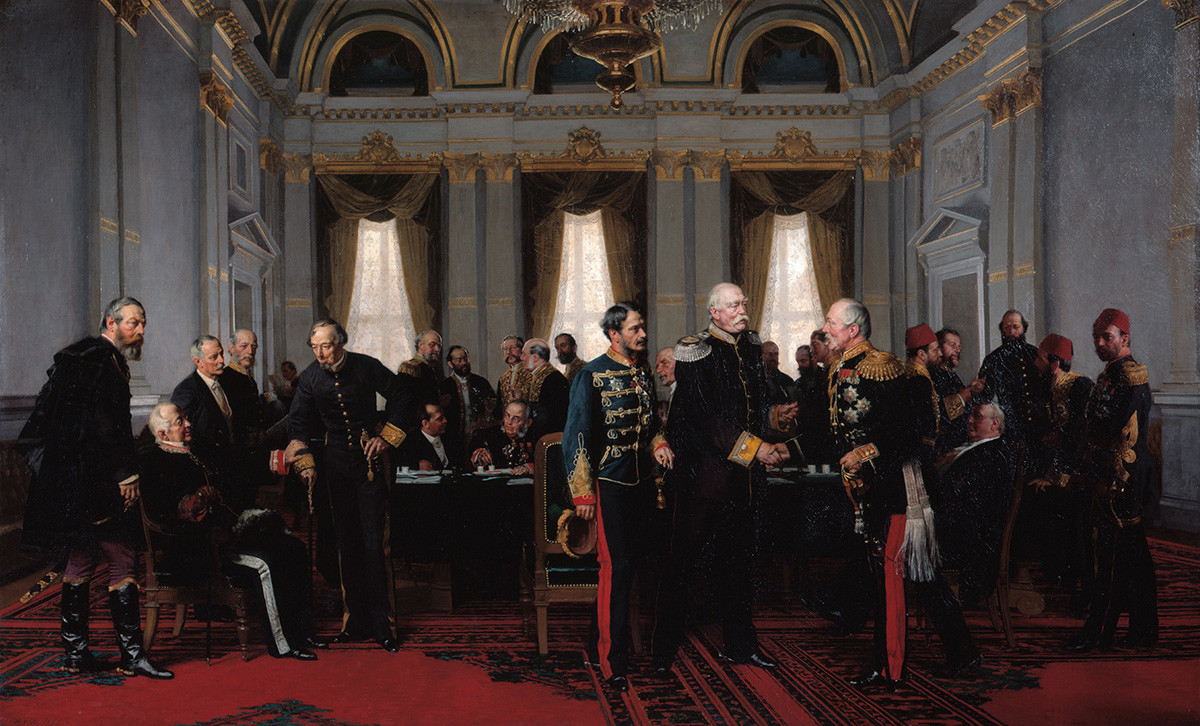 The idea of a Greater Bulgaria did not materialize. Instead, a vassal principality — centered on Sofia and greatly reduced in area — was established, as well as the autonomous Ottoman province of Eastern Rumelia, thus depriving Russia of its access to the Mediterranean. As a reward for helping to revise the Treaty of San Stefano, the Sublime Porte handed Cyprus to the British.