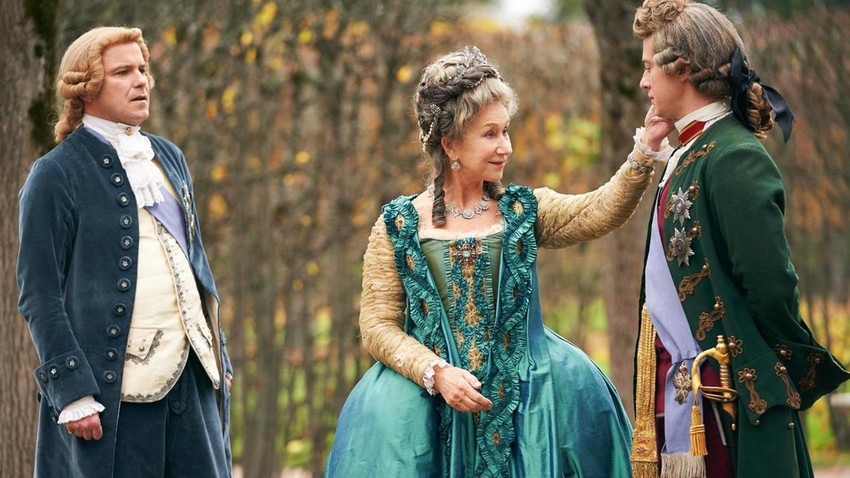 HBO, 2019
What’s real and what is fiction among the sassy stories about Catherine the Great?

Let’s get this straight, Catherine the Great really had more official and unofficial favorites – intimate companions, who often influenced politics – than any other Russian monarch. Her reign was the heyday of favoritism in Russia. The favorites used their position to control the money – for example, wine taxes. 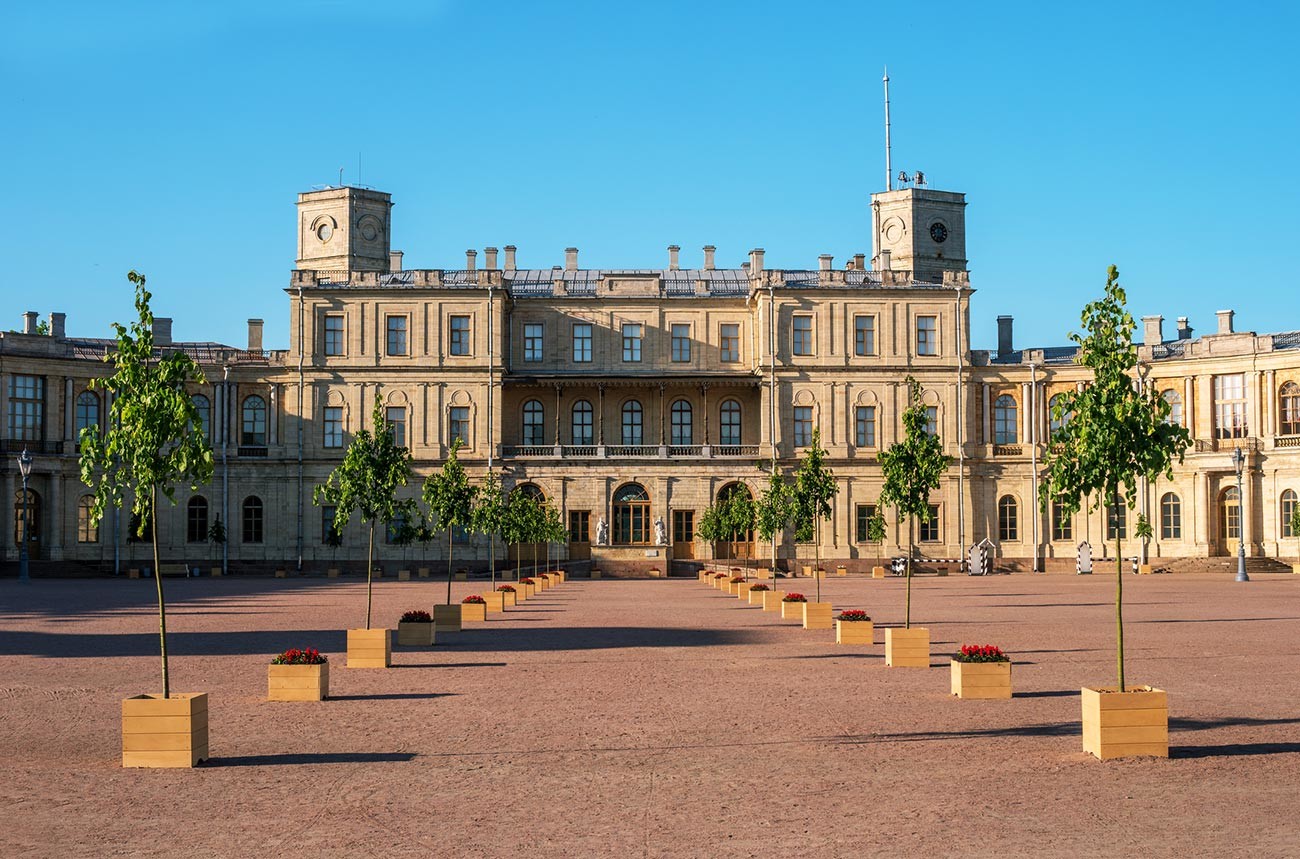 The favorites gained civil positions and military decorations for very little practical reason – and devastated the country’s budget. Eleven of her ‘main’ favorites persuaded her to spend about 93 million rubles on them – precious presents and financial support. In 1796, the Russian Empire’s annual tax income was less than 50 million rubles. That’s the scope of Catherine’s expenses on favorites, and this was the main downside of the favoritism.

However, some historians have not held back from speculating about the Empress’s bedroom stories. But are all the unsavory legends about her sexual appetite true? 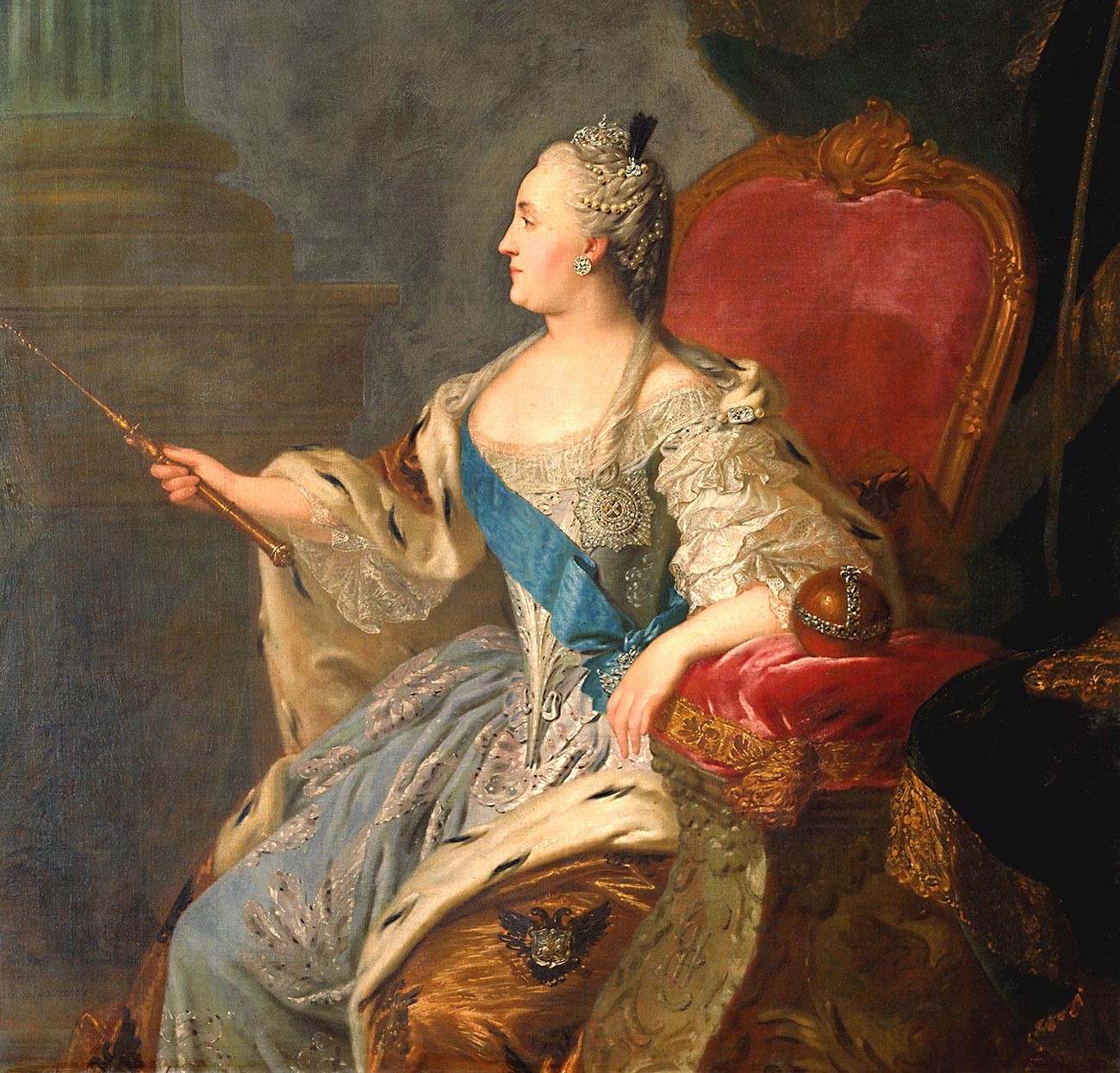 The nastiest legend is about Catherine the Great dying from internal bleeding after having sex with a stallion. Which is of course unimaginable. Catherine the Great died in her restroom and she probably had a stroke that partially paralyzed her before her death. But where does the story come from?

A Polish pseudo-historian Kazimierz Waliszewski (1849-1935), who wrote primarily about Russian history, coined this story in his book “The Romance of an Empress: Catherine II of Russia,” published in 1900; naturally, nobody could create such story in the 18th century. 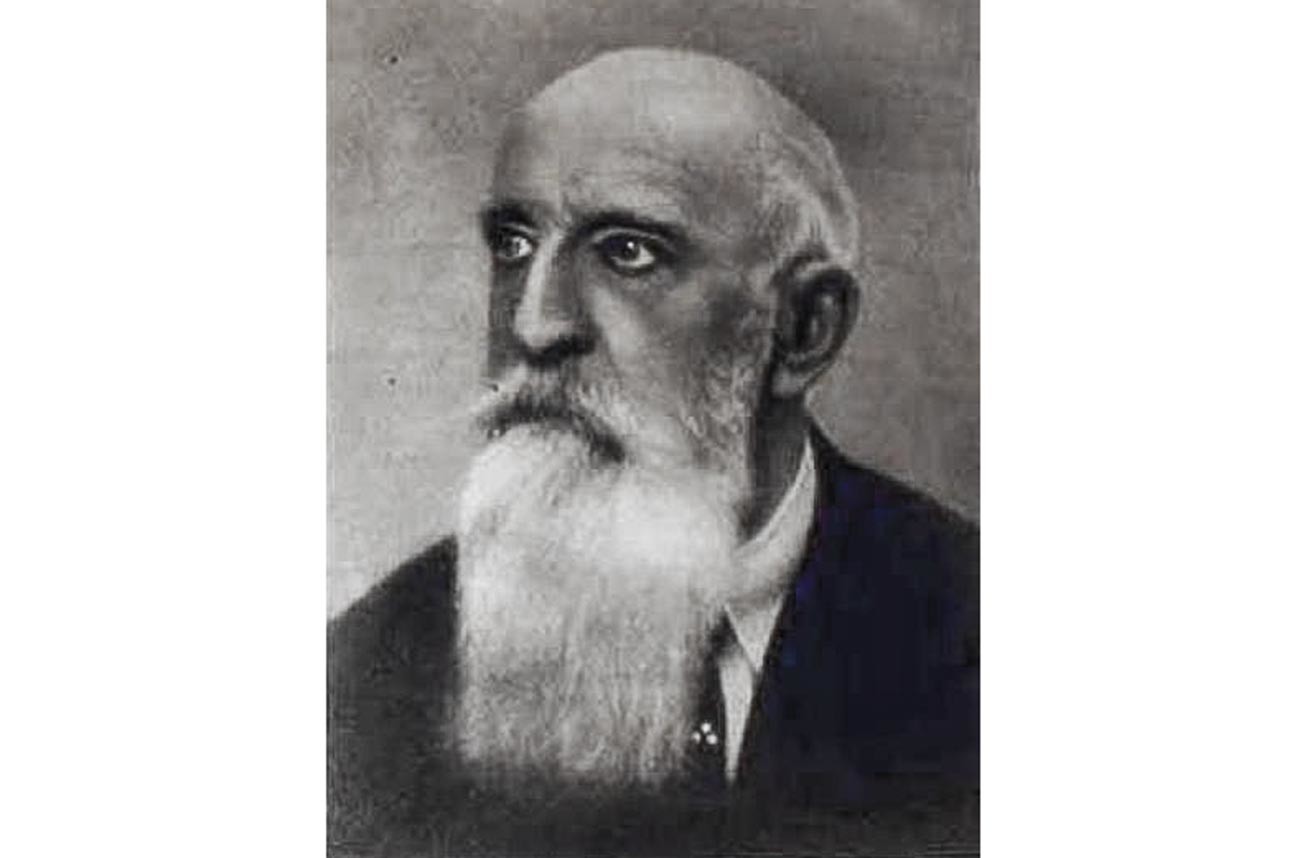 Kazimierz Waliszewski, the man who liked to make uo cheesy stories about Catherine the Great.

Another legend tells about the so-called “private room” Catherine ordered to be created for her dates with her last favorite, the 22-year-old Platon Zubov. Allegedly, the furniture in this room was decorated with male and female genitalia. A table, said to be from this room, was sold at Sotheby’s in 2017. However, there are no records or evidence of the existence of such a room.

Why Catherine and her husband Peter III didn’t get along 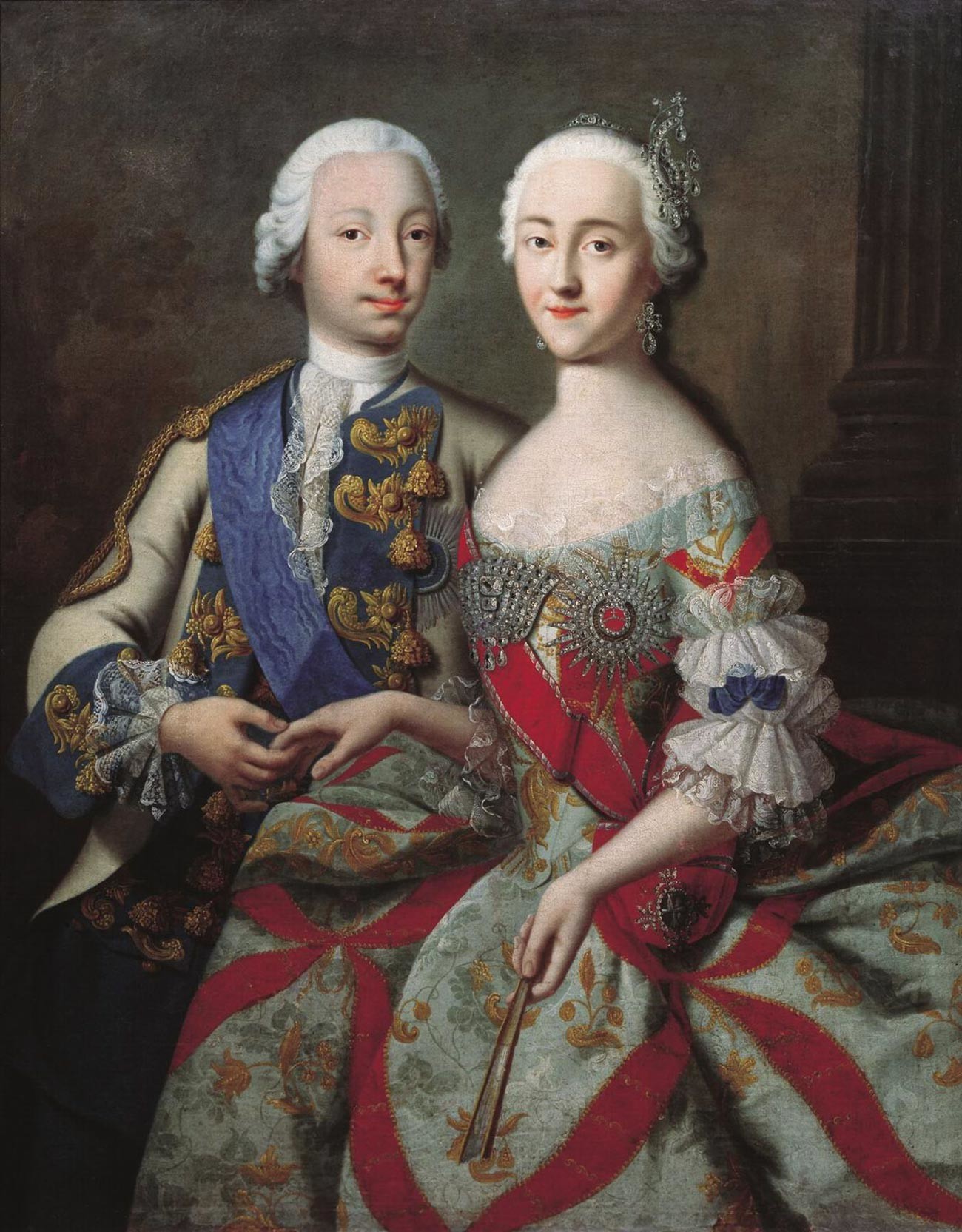 Peter and Catherine as Grand Dukes, before Peter became the Russian Emperor

Russian historian Konstantin Pisarenko writes that when 16-year-old Sophie of Anhalt-Zerbst was betrothed to Peter Fyodorovich, the heir to the Russian throne, she was very playful and absent-minded. She loved to party and hoped that her life in Russia as the Grand Duchess Catherine would be splendid. But Peter didn’t treat her with more attention than he would a sister. He refused to spend time with her, playing toy soldiers in his rooms; at the same time, he flirted with ladies-in-waiting quite openly. Even before the official marriage, Peter got measles, which made him look “terrible,” in the words of Catherine herself. After that, Catherine only felt disgust towards her arrogant and strange husband.

Peter, unfortunately, had reasons to be like this. From the age of 11, when he lost his father, Charles Frederick, Duke of Holstein-Gottorp, Peter was brought up in the atmosphere of the musty German countryside, at the home of Adolph Frederick, who was appointed administrator of the Holstein-Gottorp district for the time of Peter’s infancy. Peter was raised in an atmosphere of severe austerity by his tutors, military men who often beat and humiliated him – for example, he was often publicly flogged naked by his apparently sadistic tutors. This practice, obviously, messed with his head in the most disturbing way. Although Peter loved military exercises, was fond of marching and guns, he shivered and trembled at the sound of cannons firing – even as Emperor.

There are accounts that on the wedding night, August 22, 1745, Grand Duke Peter didn’t have sex with his wife, which reportedly morally destroyed Catherine. Different reasons are cited for this: phimosis that Peter had; measles could also be the reason for his sexual impotence. Anyway, this state of things went on. But after 1752 Catherine had Sergey Saltykov, a member of the old aristocratic kin, as her first “official” favorite – historian Olga Eliseeva argues that it was Empress Elizabeth of Russia herself that decided Saltykov must become an intimate friend of Catherine – in case Peter was really infertile. But an operation healed Peter’s phimosis and he was able to conceive a child with Catherine – Pavel, who was born in 1754. But Peter’s ability to father a child didn’t mean he became “normal” or started treating Catherine better. They had virtually no normal married life at all.

What is true about Catherine’s private life 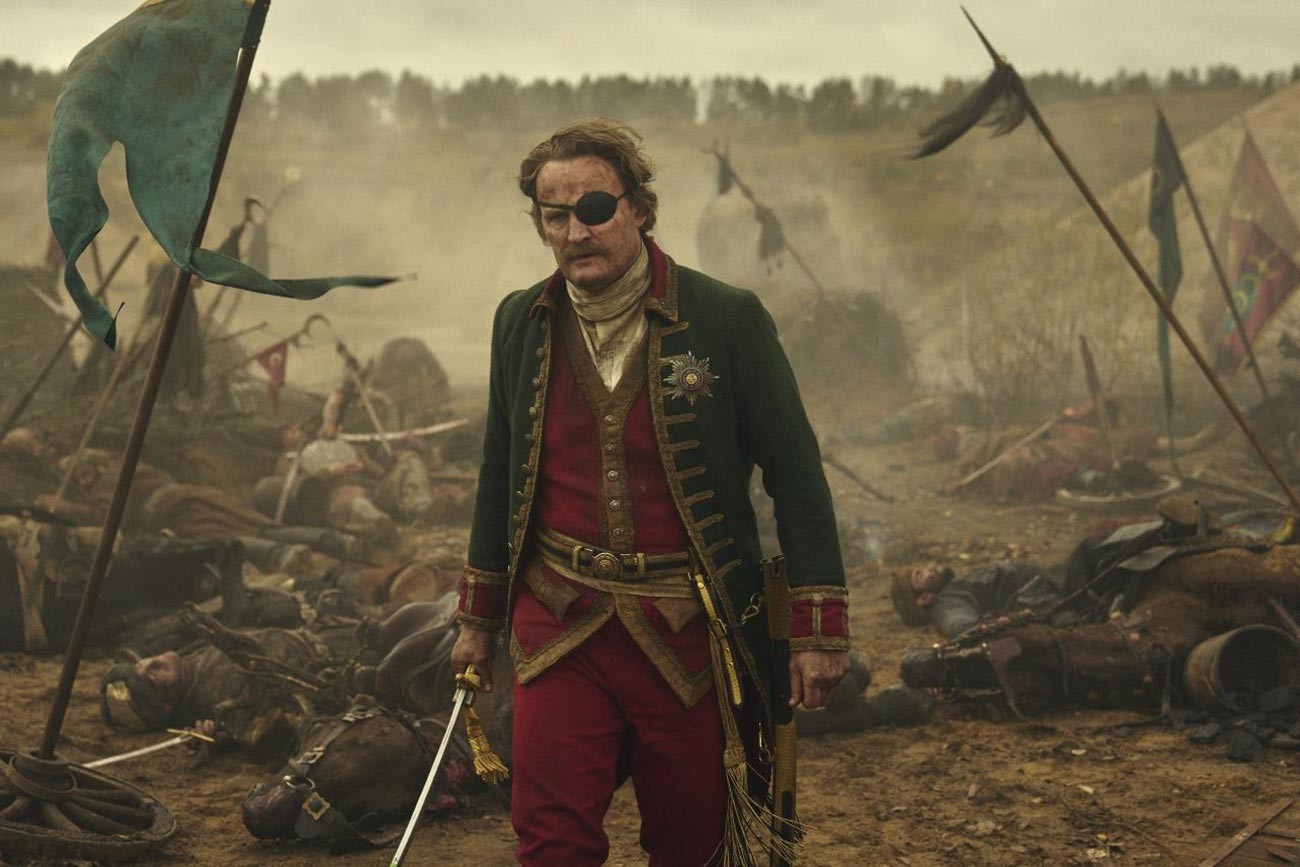 Around the mid-1750s, Catherine started having regular extra-marital affairs. She later called it a “vice” in her letters to Grigoriy Potemkin, her most important lover and favorite. In 1774, she wrote: “God knows it is not because of immorality… but if I only could have a husband in my youth that I could love, I would never change [my attitude] to him. But my heart could not rest an hour without love…”

Catherine had more than 21 favorites. Grigoriy Potemkin, who occupied this “position” in 1774-1776, was the most trusted of them all. In 1775, they even had a secret wedding ceremony. Catherine respected Potemkin as a strong military and political leader and they maintained relations after their affair ended (there are accounts that sexual relations between Potemkin and Catherine continued until Potemkin’s death). From 1776, Potemkin ‘approved’ many of her next favorites and they often followed Potemkin’s interests.

Apart from Pavel, Catherine had more children. Anna, born 1757, was officially recognized as his child by Peter III, but he openly doubted his paternity. Anna lived only for two years. Stanisław August Poniatowski (1732-1798), later King of Poland, was most likely her father.

Alexey Bobrinsky (1762-1813) was Catherine’s son from Grigoriy Orlov. He was born in secret and given to Catherine’s room servant Shkurin to be brought up. At 18, Alexey was sent to study abroad for four years and then given estates in Russia; he later traveled extensively and became a scientist.

There were at least four others (girls) rumored to be Catherine’s children, but the sources don’t supply enough information to confirm the truth or otherwise of these rumors.