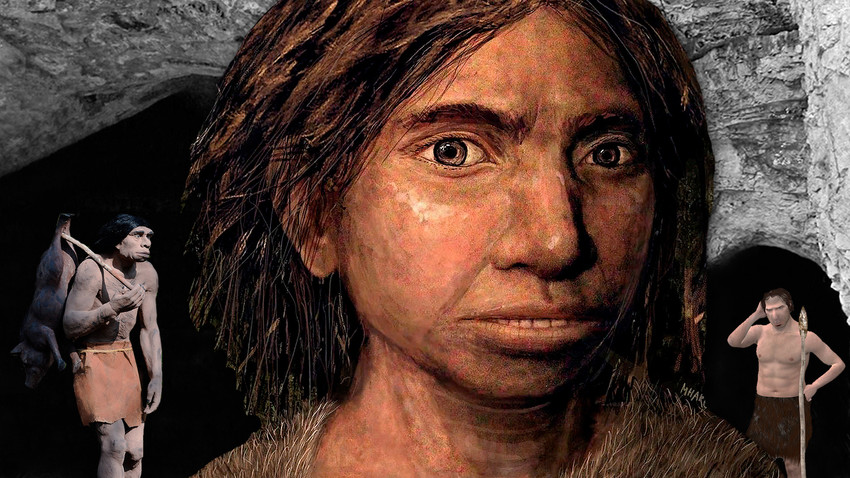 Legion Media, Alexander Kryazhev/ Sputnik, Maayan Harel / Hebrew University of Jerusalem
There was an archaic human creature like no other, which shared a common ancestor with Homo sapiens. It lived in the best place in the world – Altai, Russia.

Denisovan man (Homo denisova) are an extinct species of archaic humans. They belong to the genus Homo, but although they are not humans (Homo sapiens) – we have some common ancestors. By studying Denisovan man, scientists can dig into the depths of ancient DNA.

Where does the name come from? 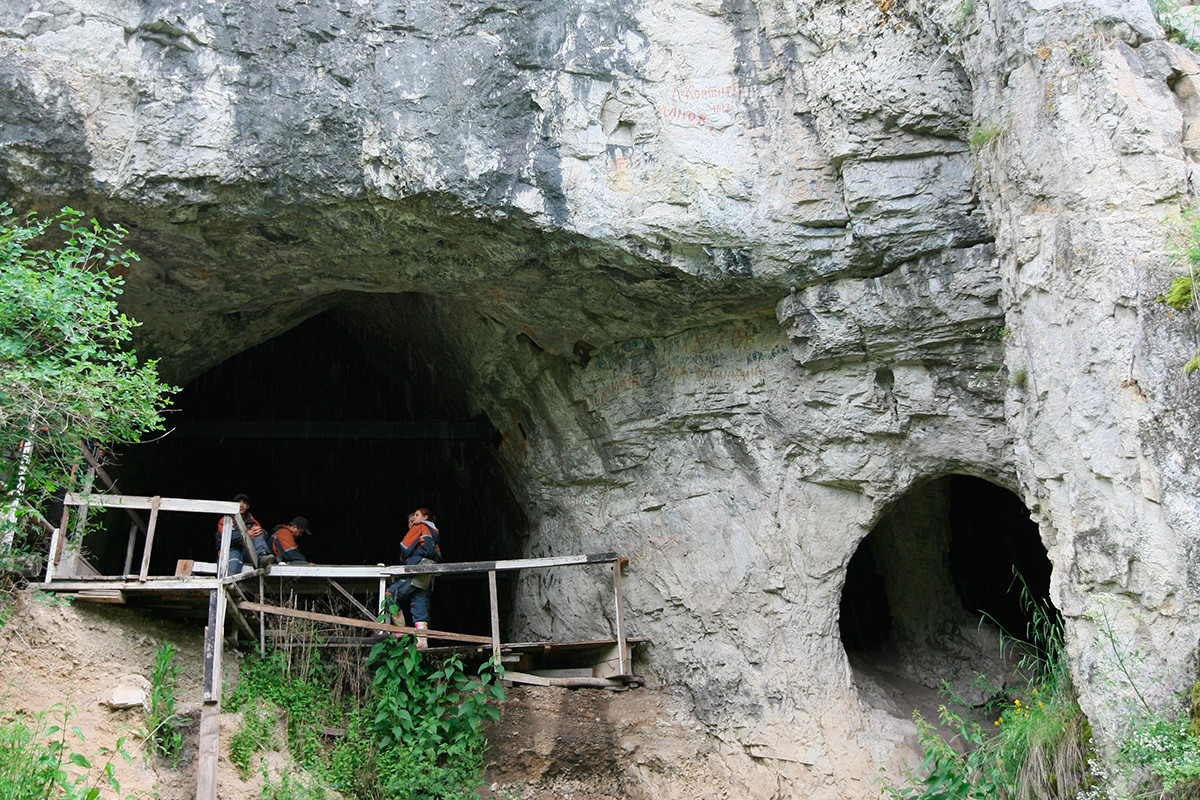 The entrance to the Denisova cave

The Denisova cave in the Altai mountains of Siberia, Russia, has been inhabited from prehistoric times – first by Neanderthals, then by humans. The cave, easily accessible for humans without any climbing skills, and located close to water, affords a very comfortable shelter. Its inner area is 270 sq. meters (2,900 sq. ft.). Over the course of time, 20 archaeological stratums formed in the cave. 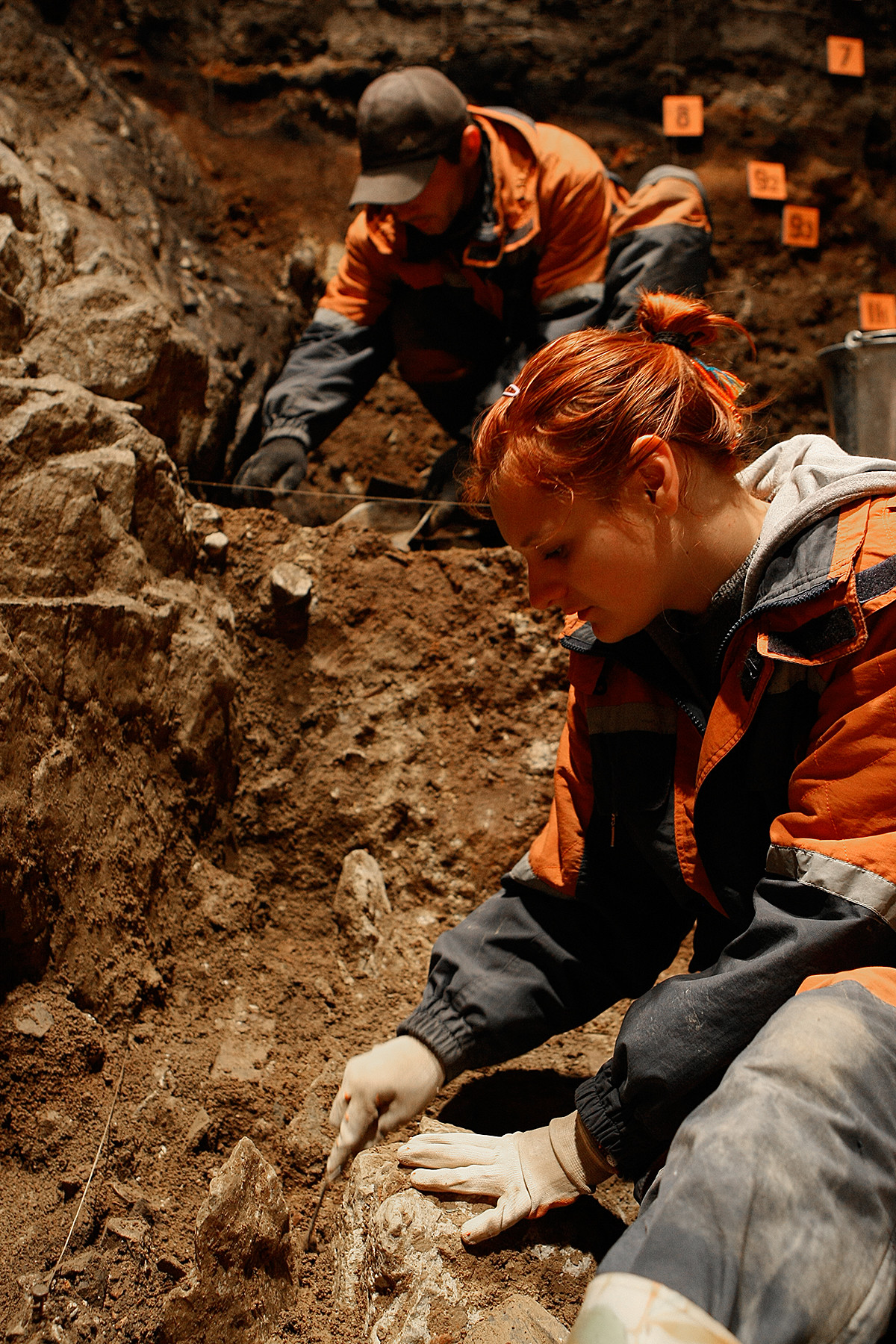 The cave was discovered as an archaeological site in the 1970s. The first remains of Denisovans were found in 1984, 2000, and 2010, but they were thought to be Neanderthal remains. Only in 2008, with the discovery of a girl’s finger bone, the Denisovan man was finally identified.

What Denisovan remains were found? 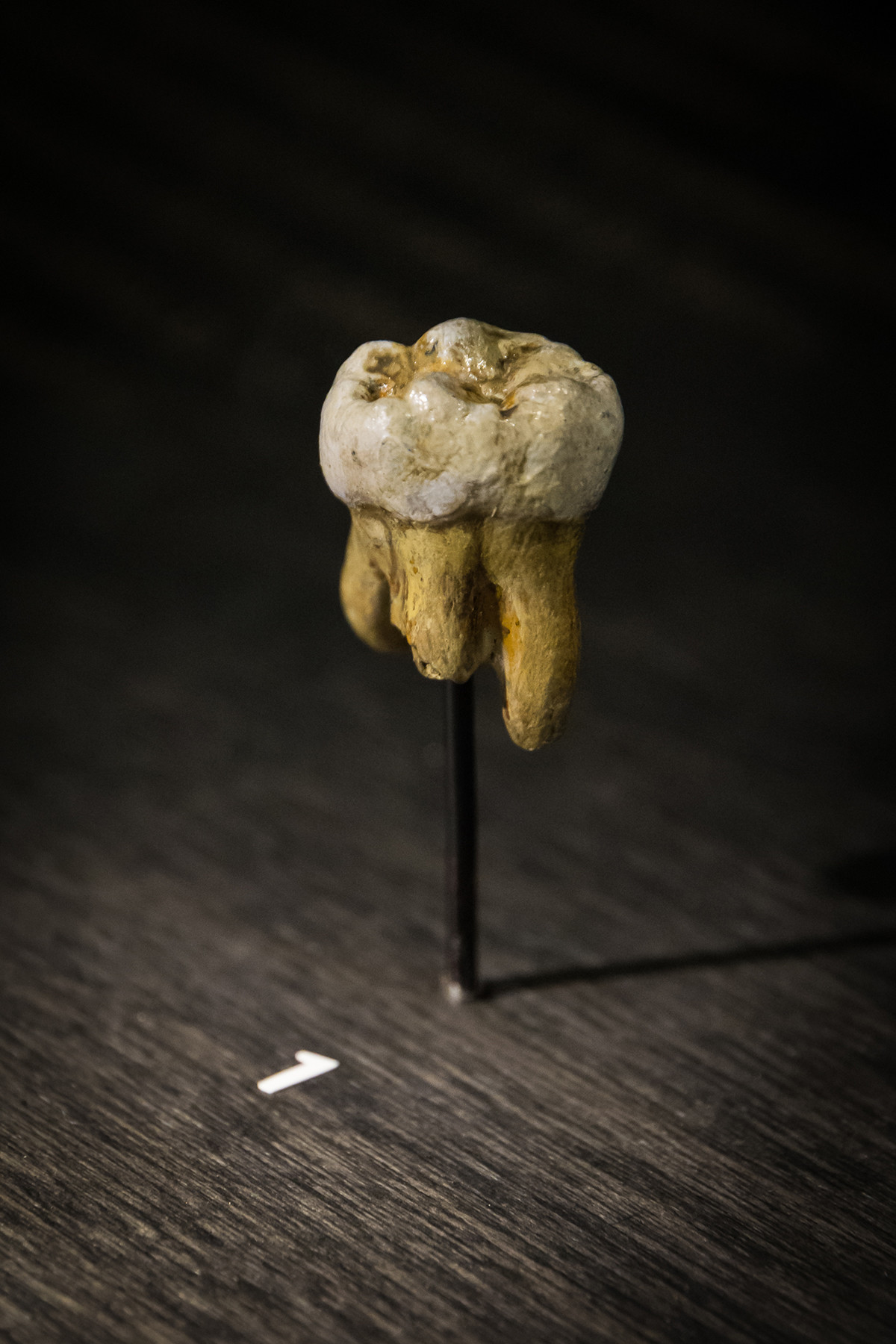 The molar tooth of a Denisovan found in 2000

So far, a finger bone, three teeth, some bone fragments, and a skull fragment have been found in Denisova cave – and a partial jawbone found in Tibet in 1980 has also been identified as belonging to the Denisovan people.

What is so unique about Denisovan man? 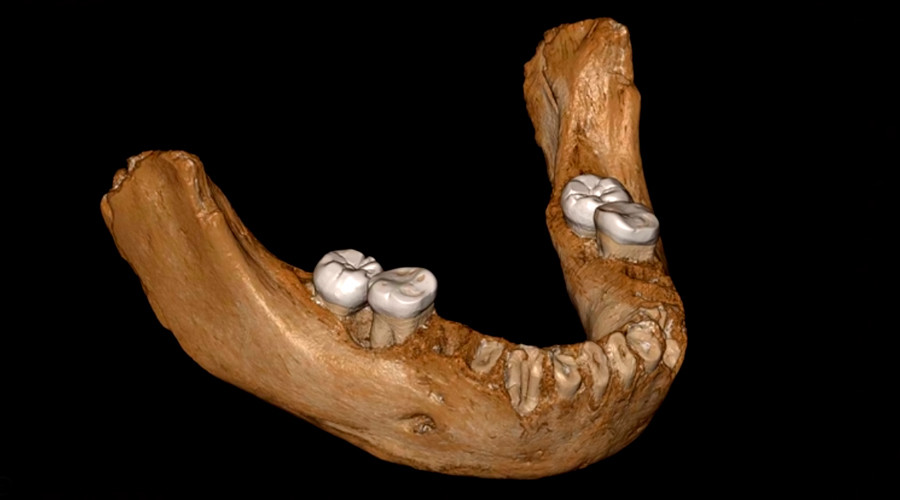 The reconstruction of the Denisovan jawbone

The finger bone found in 2008 (identified later in 2017 as belonging to a dark-skinned, brown-eyed girl aged 7-12) was studied by a team from Max Planck Institute for Evolutionary Anthropology in Leipzig, led by Swedish geneticist Svante Pääbo.

They concluded that the DNA of the Denisovan differs from human DNA by 385 nucleotides (basic building blocks of DNA), while human and Neanderthal DNA are just 202 nucleotides different. Basically, the Denisovans were an ancient and complex proto-human species.

In February 2019, the latest (as of now) sensational discovery was made in the Denisovan cave – another skull bone of a Denisovan male, the largest example found. 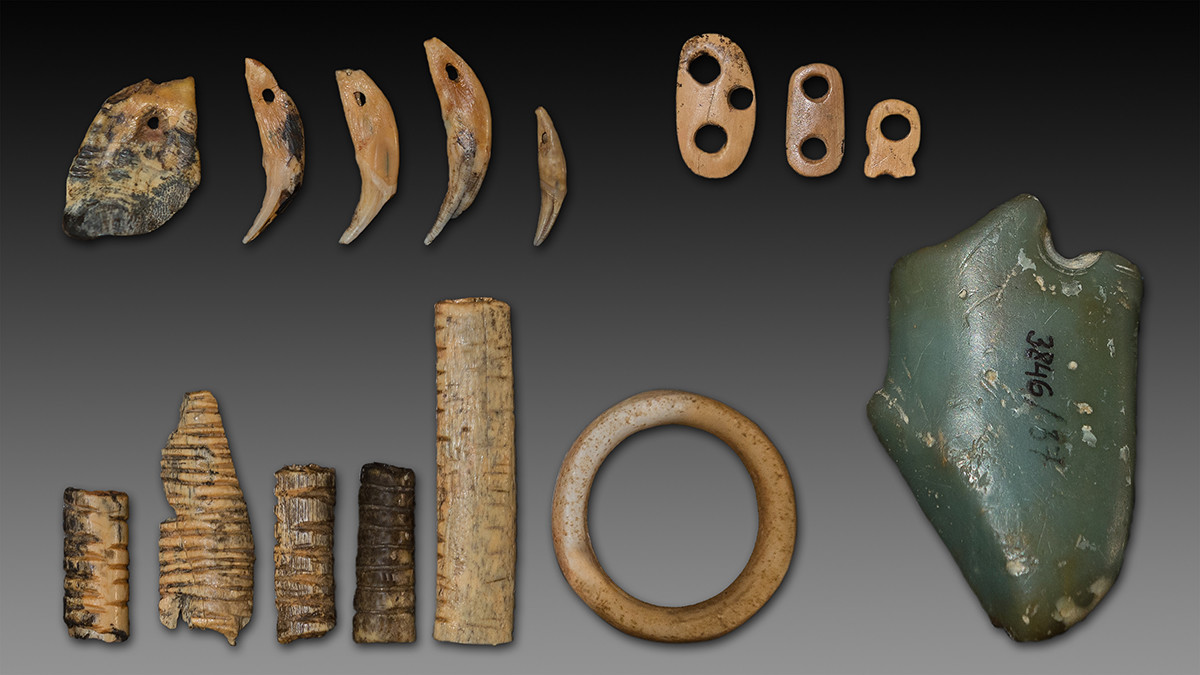 We have very, very little information about their appearance. Judging by the size of their teeth and the jawbone, the Denisovans were larger than humans. They had dark skin. Their jaws were longer and bulkier, their faces were wider than those of humans. However, we still don’t have any reliable reconstruction of Denisovan man’s appearance.

The stone tools probably created by the Denisovan man

The Denisovan population, as the 2019 genetic study shows, lived in the high mountains of Tibet. As the Denisova cave findings show, they were very proficient in tool making, far surpassing contemporary humans, not to say Neanderthals. They used bird bones as needles, they created primitive jewelry – necklaces and bracelets. The Denisovans used complicated techniques of stone processing – boring, sanding, polishing. Humans reached this level of proficiency only in the Bronze Age (beginning 3,500 BC). The Denisovans also apparently traded precious materials with distant populations.

Denisovans, Neanderthals, humans: how are they related? 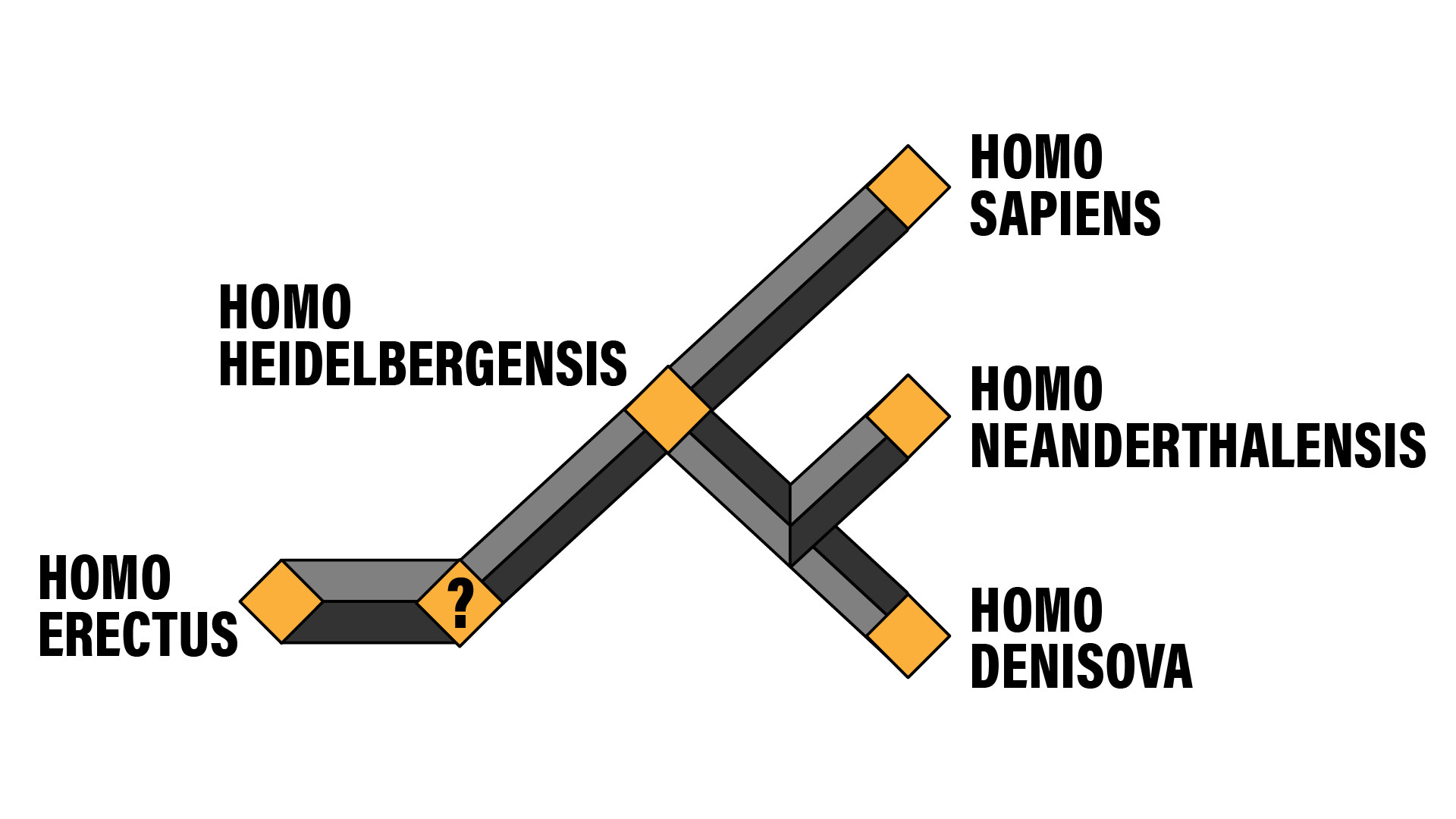 The approximate family tree of Homo sapiens and its predecessors. "?" marks the hypothetical 'Homo antecessor'.

Denisovans and Neanderthals had a common ancestor; they separated approximately 390,000 years ago. The ancestor of this common ancestor, the Homo antecessor, probably lived a million years ago.

The Denisovan people probably originated from Africa around 750,000 years ago; they left the continent earlier than Homo sapiens did. Vyacheslav Ivanov (1929-2017), one of Russia’s leading anthropologists and indo-Europeanists, thought that the Denisovans left Africa earlier than humans and migrated to Altai. Thousands of years later, when the Homo sapiens species reached Altai, they met the Denisovan people and interbred with them, Ivanov argued.

Denisovans still lived in the Denisova cave between 170,000-110,000 years ago. There were at least two groups of Denisovans with 65,000 years between them. For a long time, Denisovans and Neanderthals coexisted in this cave and even interbred. In 2018, studies showed that a 2012 bone fragment from a Denisova girl bore 36.6 percent of Neanderthal DNA and 42.3 percent Denisovan DNA, which means the girl was a first-generation hybrid of a Neanderthal mother and a Denisovan father.

In 2014, it became clear that Tibetan people can adapt to hypoxic - low oxygen - environments typical of high-altitude plateaus because they have inherited a hypoxia pathway gene, EPAS1, from Denisovan ancestors. Thus, DNA data suggests Denisovans probably lived in Tibet and learned to adapt to its environment. The Denisovan DNA lines have been discovered also in the DNA of the indigenous peoples of New Guinea. Archaeological data and DNA data suggest that all three species (modern human, Neanderthal and Denisovan) lived in the Denisova cave at different times, and that all three species interbred with each other.