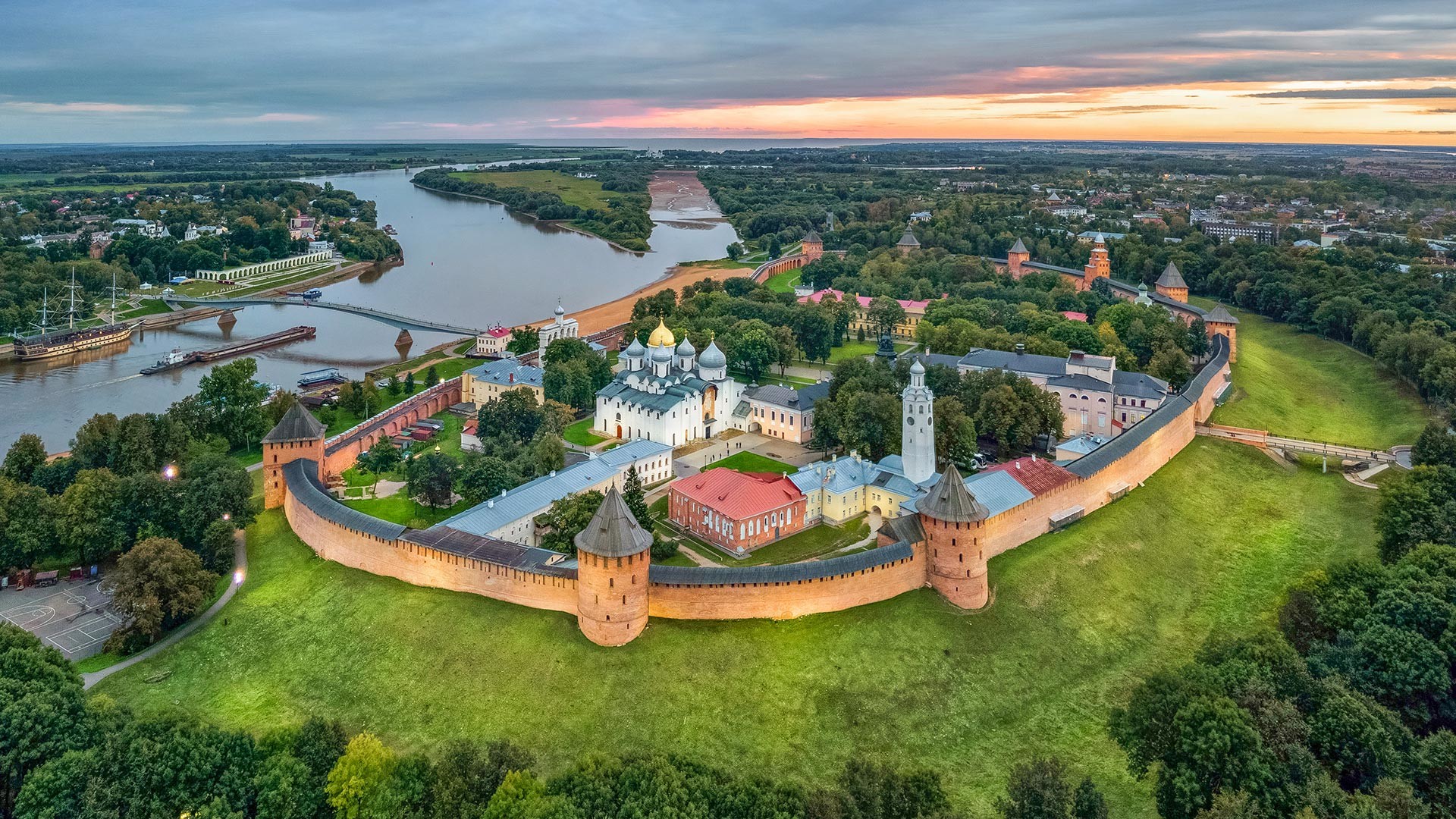 Legion Media
The Novgorod Detinets, the citadel of Veliky Novgorod, is easily the oldest kremlin in Russia. But did you know that the current fortress of Novgorod was designed by foreign architects?

How does one tell these names apart from one another – detinets, citadel, kremlin? Kremlin (Кремль, kreml’) is the general name for town and city citadels in Russia. There were at one point probably about 400 kremlins across Russia, and around 20 of them have been preserved to this day. Detinets is how a Kremlin, or a citadel, was called in ancient times in Russia.

According to academician Valentin Yanin (1929-2020), an unrivaled expert in the history of Novgorod, the word detinets means “the place of the elders”, just like dziedziniec in the Polish language. Very appropriately, the Novgorod Detinets initially was an ecclesiastical site, and this function remained the primary one for this place – when Novgorod invited Russian princes (князь, knyaz’) to rule the city, the princes didn’t live in the detinets, they had their residences on the opposite bank of the river Volkhov. But the first fortresses of Novgorod appeared probably even before the first bishop, Joachim the Korsunian (989-1030), arrived there.

1. The ancient Novgorod fortress existed before the Christianization of Kievan Rus’ 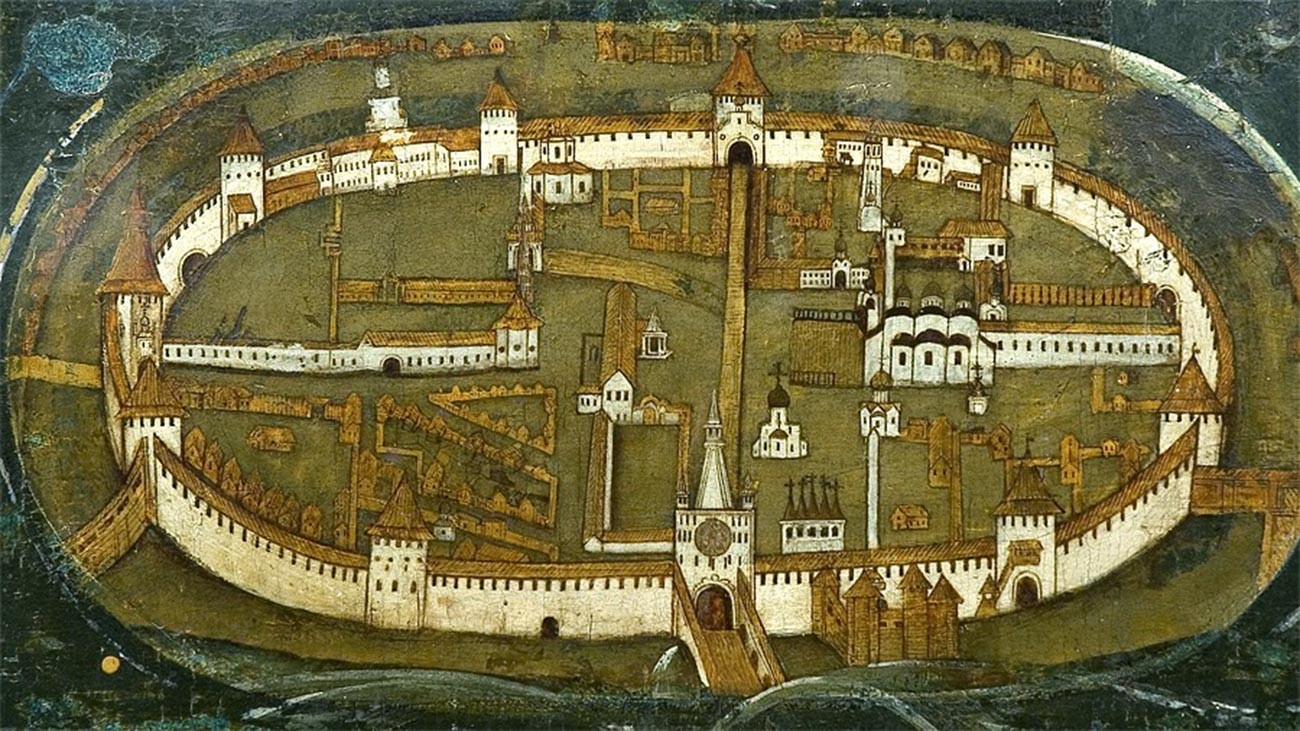 In 2017, it became known the Novgorod Detinets is older than we thought it was. Chronicles hold that the first citadel here was founded in 1044. However, radiocarbon dating was performed on two fragments of ancient wooden fortifications found under one of the former towers of the Novgorod Detinets. They were indicated to be around 951 years old, give or take 27 years, and 918 years old, give or take 41 years, which means the fortress probably could have existed here as early as the middle of the 10th century! The Christianization of Kievan Rus’ only occurred in 988.

2. The ancient Novgorod Detinets was an impregnable fortress 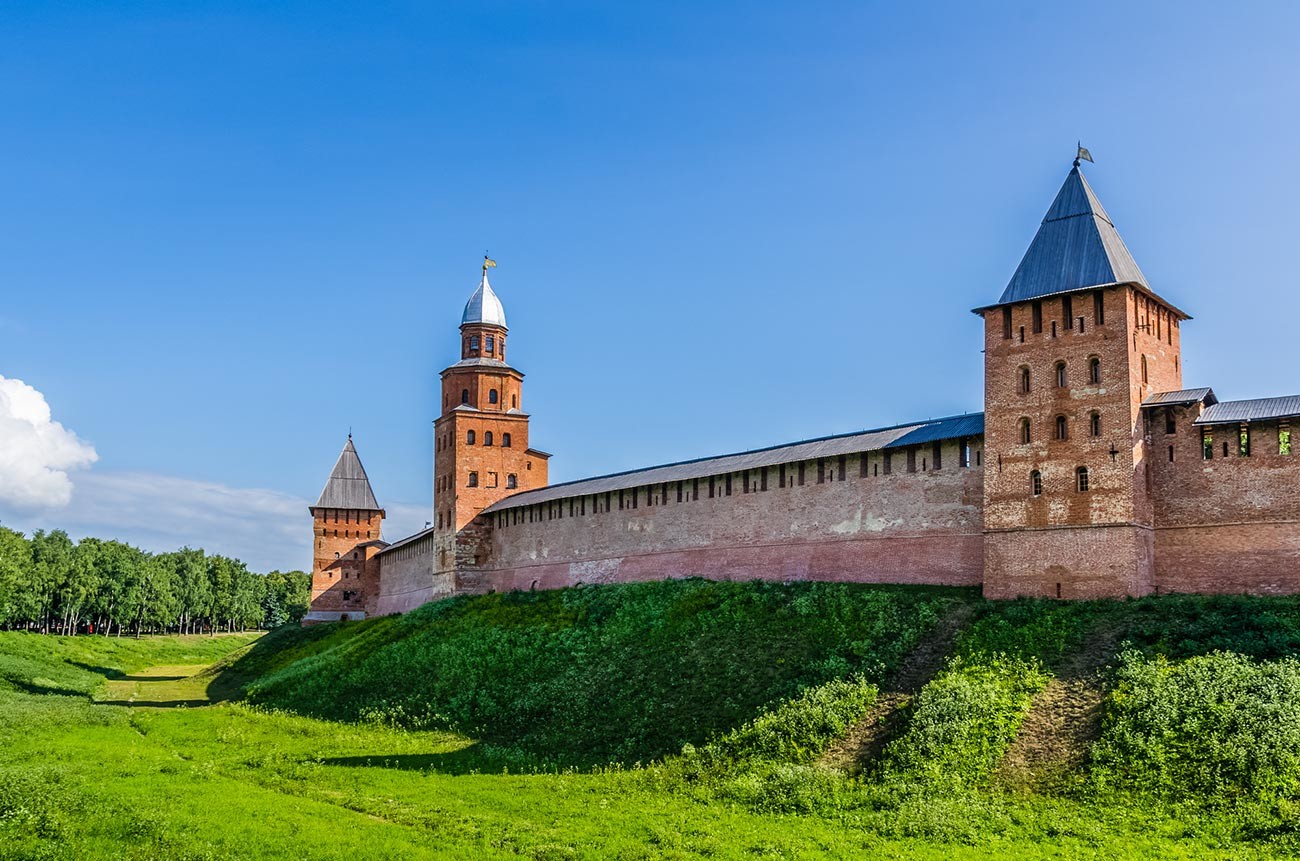 The Novgorod Detinets walls and towers

In the 11th-13th centuries, the Novgorod Detinets was an impregnable fortress. It had only two entrances. It was conquered and infiltrated by the enemy only once, in 1065. One might say – this doesn’t count; but in the times of early Rus’, during the constant war between the duchies, cities, and fortresses went back and forth between the enemies like arrows. In those times, the Novgorod Detinets, taken only once, was already a fascinating stronghold. At the beginning of the 15th century, it was rebuilt in stone, and at the end of the 15th century, rebuilt once again at the order of Ivan the Great (see p. 5).

It stands on a 10-meter hill on the bank of the river Volkhov. The fortress is 565 meters at its longest point, 220 meters at its widest point and the total length of the wall is 1,487 meters (in comparison, the Moscow Kremlin’s wall is 2,235 meters in total length), while the inner area in total is 12.1 hectares (Moscow Kremlin – 27.7 hectares). The Novgorod Detinets walls range from 3.5 to 6.5 meters in width and are made of limestone and cobblestone. The height ranges from 8 to 15 meters. There are 9 preserved towers, however, 3 towers are gone.

3. The Novgorod Detinets is the place of the oldest church in Russia 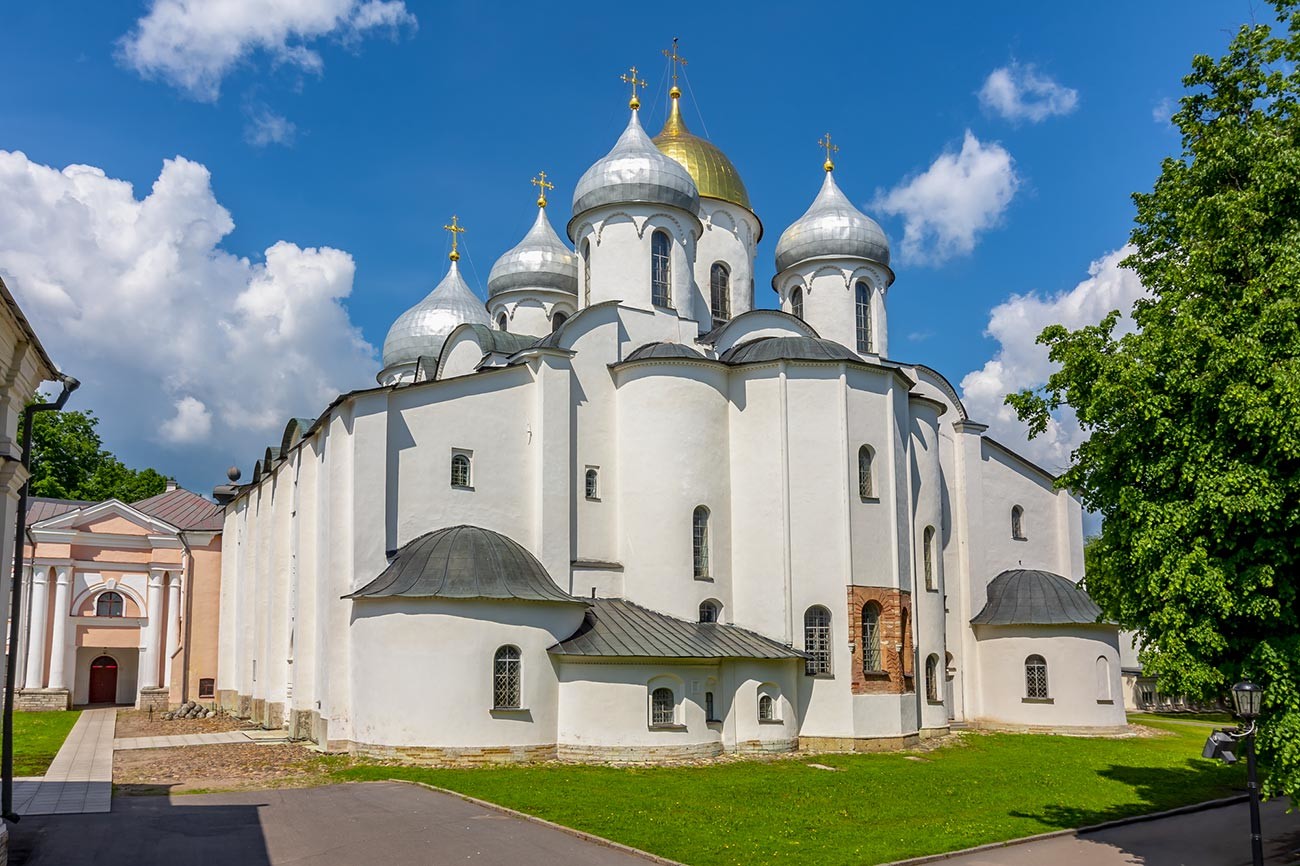 At the beginning of the 11th century, Velikiy Novgorod wasn’t a part of Rus’, it was an independent Northern state, the Novgorod Republic. However, Kievan prince Yaroslav the Wise (978-1054) made a deal with Novgorod to protect the city. His son, knyaz’ (Prince) Vladimir Yaroslavich of Novgorod (1020-1052) founded the new wooden detinets in 1044.

Inside it, he also founded the Cathedral of St. Sophia, which was completed in 1052. Still fully preserved, this astonishing piece of medieval architecture is 38 meters tall and has 5 domes. The Cathedral of St. Sophia in Velikiy Novgorod is the oldest church building in Russia and the oldest building of any kind still in use in the country. But there’s one more “record-breaking” building within the Novgorod Detinets.

4. The Novgorod Detinets houses the only Gothic civil building in Russia 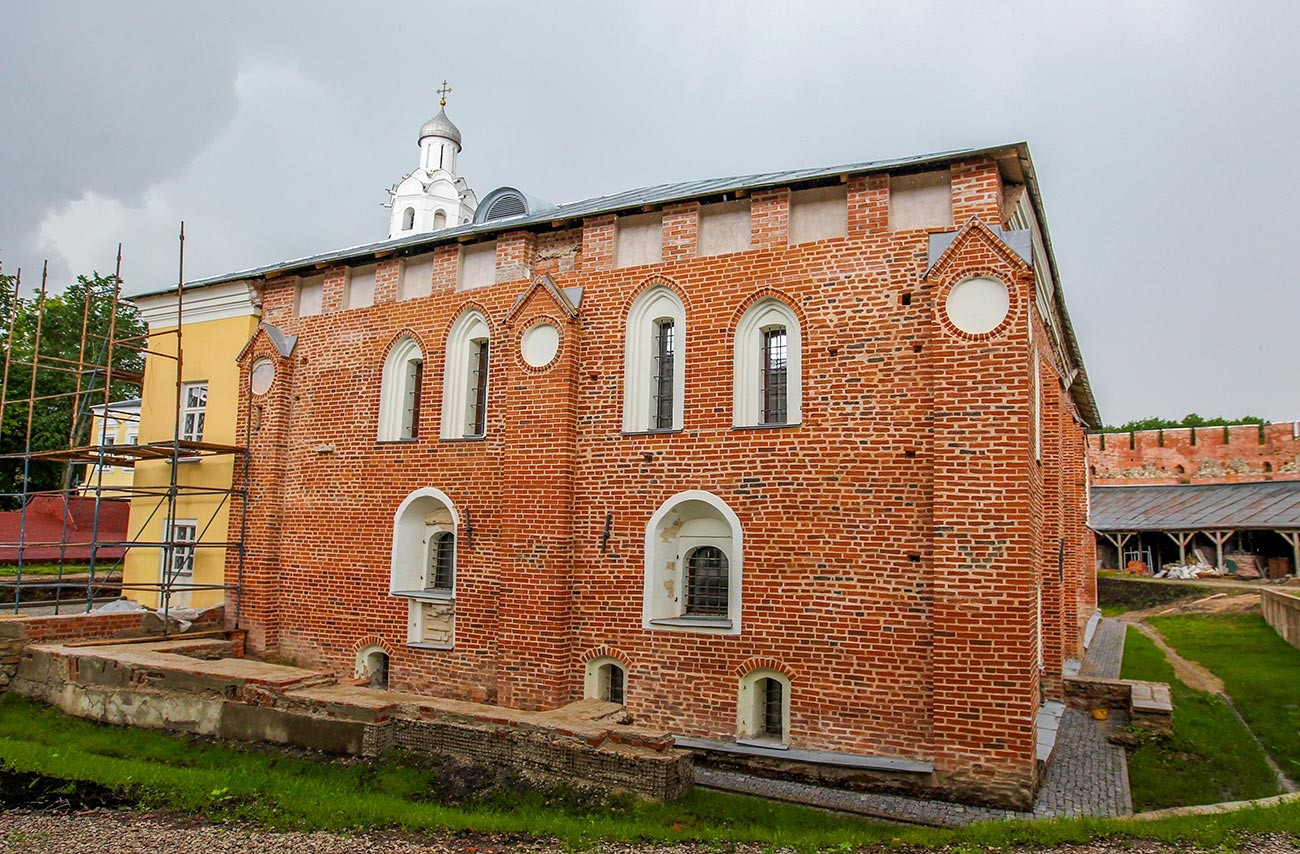 The facade of the Palace of Facets in the Novgorod Detinets

The oldest place inside the Novgorod Detinets is the Episcopal Court. Here, the first bishop of Novgorod Joachim the Korsunian placed his residence – probably because this spot was considered the oldest pagan ground, which needed to be “sealed closed” with Christian buildings. In any case, the Episcopal Court was a separate place inside the fortress; it probably even had its own walls. 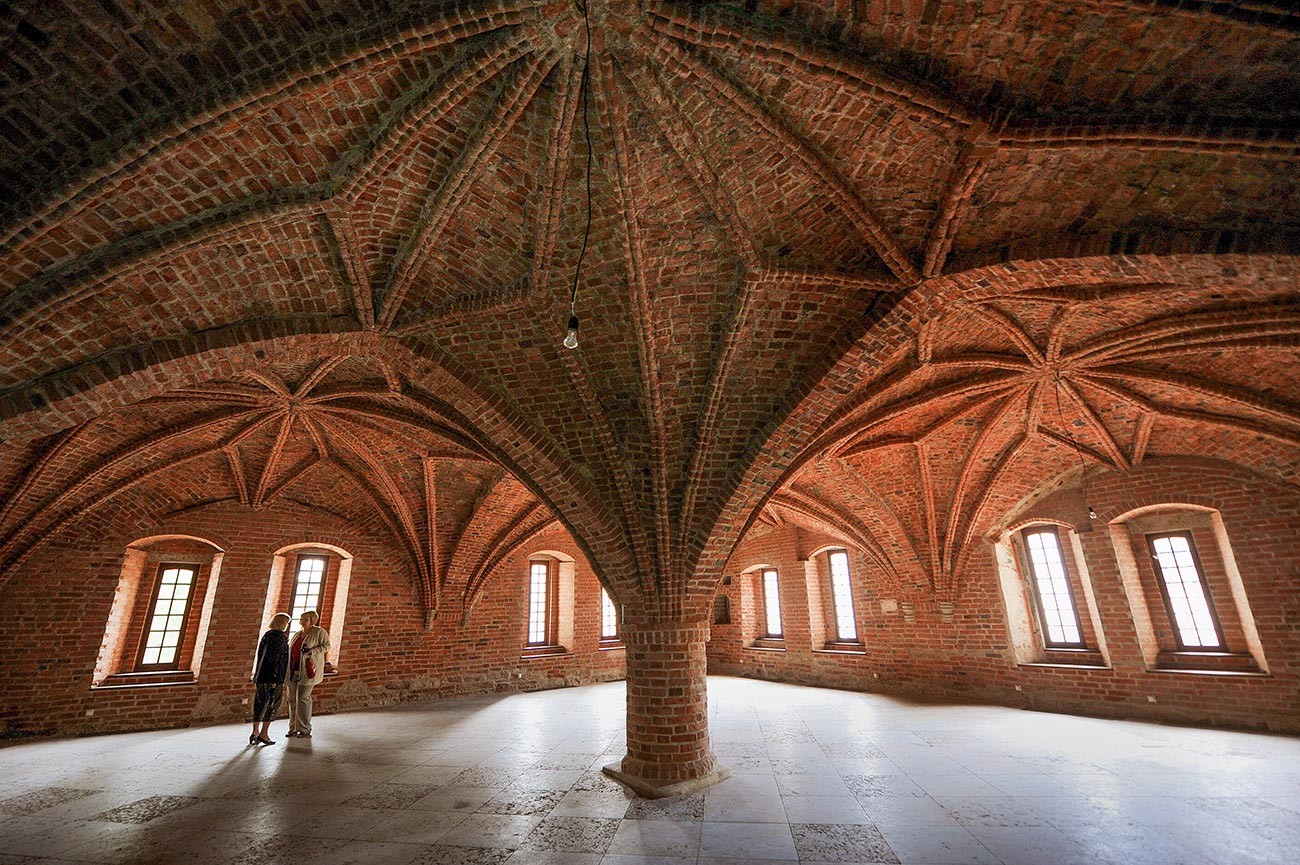 In 1433, Archbishop Euthymius II of Novgorod ordered the construction of the Chamber of Facets, a fascinating work of about 30 German architects and craftsmen. This is effectively proven by the fact that the Chamber has a lot of details used in German and French medieval architecture. The Chamber of Facets is a unique building for Russia, and the only civil Gothic building in the country. The Chamber was the main ceremonial hall of Velikiy Novgorod. Here in 1478, the order of Ivan the Great to subdue the lands of Novgorod to Moscow was proclaimed.

5. The current Novgorod Detinets was most likely built by Italians 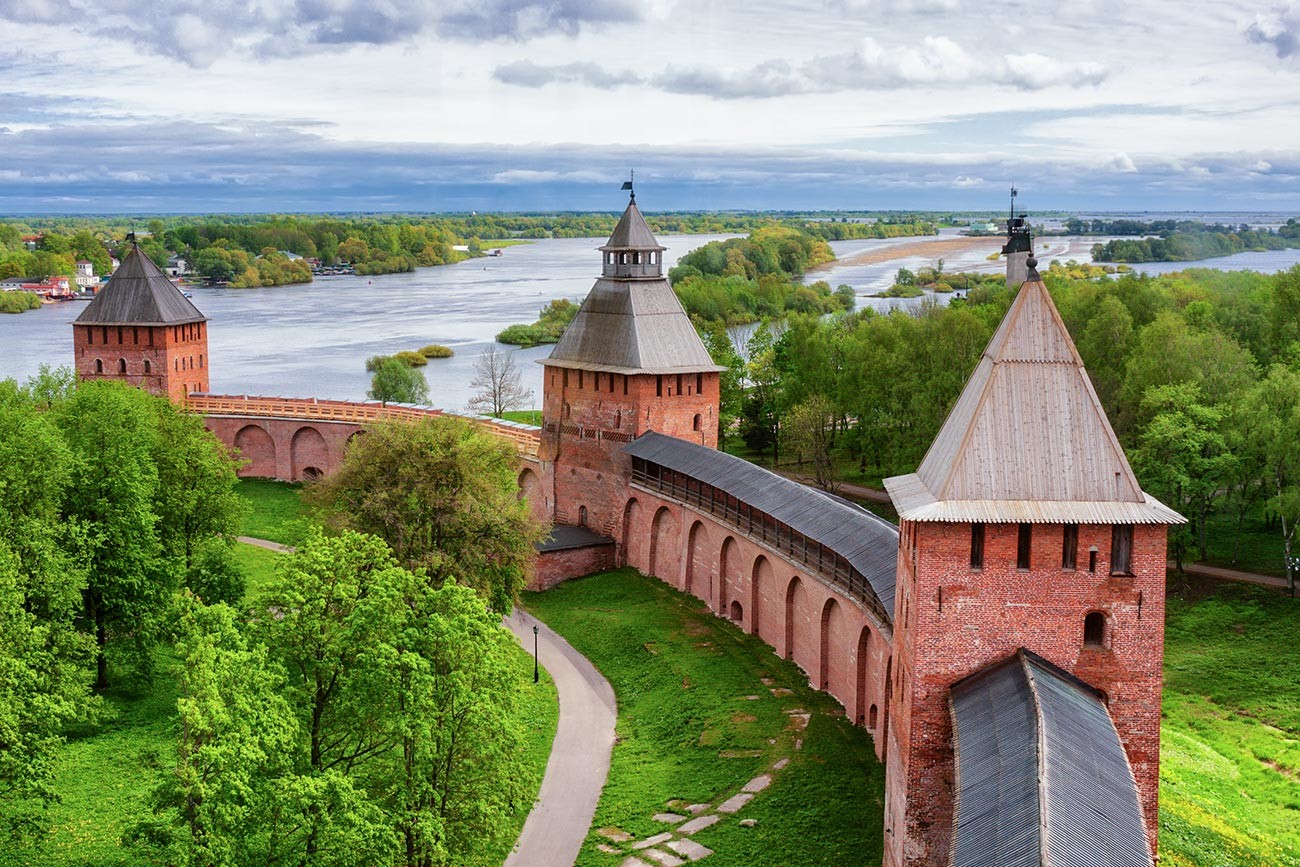 The Novgorod Detinets walls and towers

When Ivan the Great (1440-1505), founder of the Moscow Tsardom, took Velikiy Novgorod in 1478, he decided to rebuild the Novgorod Detinets to secure his victory. At the time, several experienced Italian architects were recruited by Ivan to Russia. Pietro Antonio Solari (1445-1493) was the foremost of them, credited with the construction of several Moscow Kremlin towers during the reconstruction of the Moscow Kremlin in 1485-1516, also ignited by Ivan the Great.

Antonio Gislardi, Marco Ruffo, Aloisio the Senior, and Aloisio the New (d. circa 1531), were among other architects. Often, we have no record of their exact names and years of life. There are no records either about the exact architect who rebuilt the Novgorod Detinets in 1478-1490, but he was clearly of the same ilk; or maybe worksmiths and builders constructed the Detinets following these architects’ guidelines, but its towers and walls clearly belong to the Italian fortification architecture, combined with local building traditions, compared to several other Russian Kremlins built in the same era.

Fun Fact: The Novgorod Detinets wall has one of the oldest Russian toilets

Within the Novgorod Detinets wall 13 meters north of the Voskresensky gate, near the adjacent building of a philharmonic hall, an ancient lavatory was discovered. It is a small vaulted room, 1.7 x 1.9 meters in size, with a well-preserved ventilation shaft and a sewer canal, located about 2 meters above the ground level, so one had to ascend a small ladder to get to it. The fact that the toilet was made inside the wall, and not in the living premises, is a sign of the already highly civilized society of the ancient Novgorod.