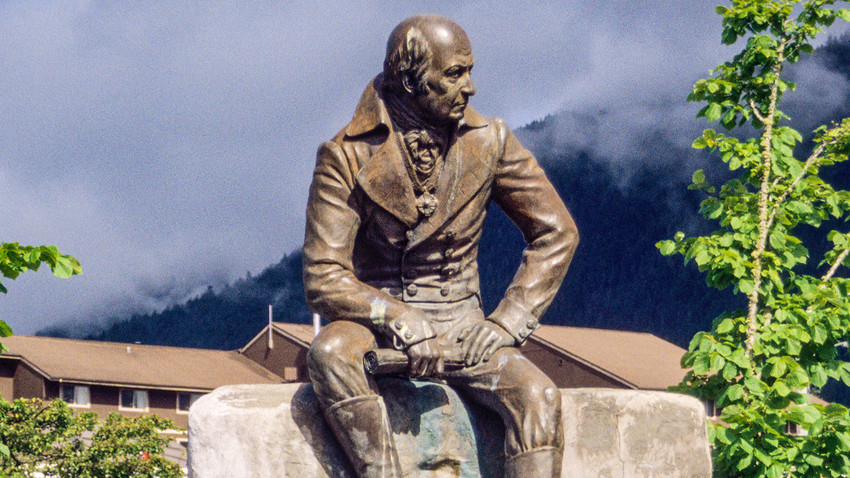 Legion Media
No doubt being a ruthless oppressor of the indigenous people is wrong. But, when you’re having a go at the wrong guy for this, it’s even worse – it’s just pathetic.

This Tuesday, the Sitka Assembly approved a plan to remove the statue of Alexander Baranov from a prominent spot in front of Harrigan Centennial Hall. “We were energized by Black Lives Matter, all that was happening down south, and we said, ‘Hey, what can we do to harness that energy?' And the statue was such an obvious thing,” said Crystal Duncan, who leads a local social justice group that pushed for the statue move. The only thing nobody mentions is that Baranov wasn’t the first to start the conflict between the Russians and the native Alaskan tribes.

Banging on the ‘cancel’ button

Cancel culture has inundated the American continent, finally reaching its North-Western shore – Sitka, Alaska. Whoa, but there wasn’t slavery there, one might say, and seemingly, there’s nobody to blame and no monuments or statues to be taken down… No, wait, the Russians were once there. Here we go again!

“Alexander Baranov (1747-1819) [...] the first colonial governor of Russian America,” says the plaque on the statue that the contemporary people of Tlingit ancestry are voting to be removed from the seaside park in Sitka. At first glance, it all seems completely legit. Except that there are mistakes even in the inscription you just read.

Alexander Baranov was born in 1746, not in 1747, as the plaque on the donated monument states. Also, he wasn’t a “colonial governor”. He was just chief manager of the Russian-American company, a Russian commercial enterprise owned and controlled by its stockholders. And even if some of these stockholders belonged to the Russian Imperial family, that didn’t mean the Russian Government controlled it in full. In fact, the government took full control of the company only after Alexander Baranov was removed from his position.

Also, Baranov never assumed the title of ‘governor’, as he never even held a military position: In 1802, he was awarded a civil rank of ‘Collegiate Councillor’, which brought him hereditary nobility – for the first time in his life. He was just a regular merchant, and to any Russian nobleman – not far from a simple peasant or a towner. Not fitting for a person who was “responsible for murder, enslavement, rape and a perpetrator of genocide”, as Sitka’s resident Nicholas Galanin (ironically apparently of Russian heritage) put it in June 2020, speaking for local indigenous communities.

The cycles of violence

Since his teens in his hometown of Kargopol, Arkhangelsk region, Baranov learned to trade, and that’s why he came to Alaska in the first place – just to face the consequences of the actions of another Russian businessman named Grigory Shelekhov, founder of the North-Eastern American Company, that after his death became known as the Russian-American Company.

Shelekhov arrived in Alaska in 1784 and tried to negotiate with the local Koniag Alutiiq (Sugpiaq) people on Kodiak Island, but he and his men were attacked. The locals then started gathering more forces to further defeat the intruders, but Shelekhov and his men resisted with guns and cannons… What followed came to be known as the Awa'uq Massacre, resulting in hundreds or maybe even thousands of indigenous Alaskans being killed and wounded.

Who attacked first? Nobody can say for sure: Shelekhov wrote that he tried to negotiate first, while Arsenti Aminak, an old Sugpiaq man, who had survived the massacre, much later reported to Henrik Johan Holmberg (1818–1864), a Finnish ethnographer, that it was the Russians that “carried out a terrible bloodbath”, without even mentioning who was the first to attack. But again, that’s not the main issue.

This event started a long series of battles between the Russians and different local tribes. The thing is, when Alexander Baranov first arrived in Alaska in 1792, in the position of the chief manager of Shelekhov’s company, he was attacked by the Tlingit people and barely survived! It was natural for the locals to protect their own land. But then again, Baranov’s intention wasn’t “murder, enslave and rape” – it was just for the sea otter fur trade, which the locals also wanted, quite naturally, to keep for themselves.

We can’t say Baranov was a man who treated the indigenous tribes with the utmost respect – threatening the local Aleutian people, he made them work for his men, killing sea otters to fuel the constant fur trade. In 10 years, in 1802, the Tlingits retaliated fiercely, attacking Fort Michael (the fort that was the first settlement on the territory of the present-day Sitka), killing 24 Russians and over 200 Aleutian people… The Tlingits continued to attack different packs of Russians, who were hunting sea otters along the Alaskan shores; in 1804, Baranov and his men took Fort Michael back, killing around 30 Tlingits in the skirmish, and founded Sitka.

And the war went on and on and on. Long after Baranov’s death in 1819, battles between Russians and Tlingits (and between the Tlingits and other local peoples) continued – and sea otter fur continued to be one of the main reasons for them. What is clear now that it wasn’t a one-sided “conquest”, and it surely wasn’t “genocide”, as the contemporaries now put it.

What’s more striking is that in 2004, 200 years after the ‘Battle of Sitka’, a Moscow resident named Irina Afrosina, a direct descendant of Alexander Baranov, joined the local people for a traditional ‘Tlingit Cry’ ceremony to formally grieve the lost ancestors in the Sitka National Historical Park. It was performed to finally bury the 200-year hostility.

Judging from what is happening now, the 2004 ceremony was either done to no avail or maybe nobody remembers it anymore? Or could it be that all the history, partially described above, is just more convenient to ignore?

And this is what is wrong with the decision to remove Baranov’s statue: That the reasons that are put forward for this now are too simplistic and that the current protesters completely ignore their own history, underlining only some parts of it – while completely undermining the other ones. Does it make any sense at all? Or could it be that the ‘Tlingit Cry’ ceremony just didn’t work? Or that the Russian-Tlingit war just hasn’t ended to this day? We can only hope that these questions might pop up in the minds of those who support the immediate removal of Baranov’s statue.