How children fought for the Russian Empire in WWI 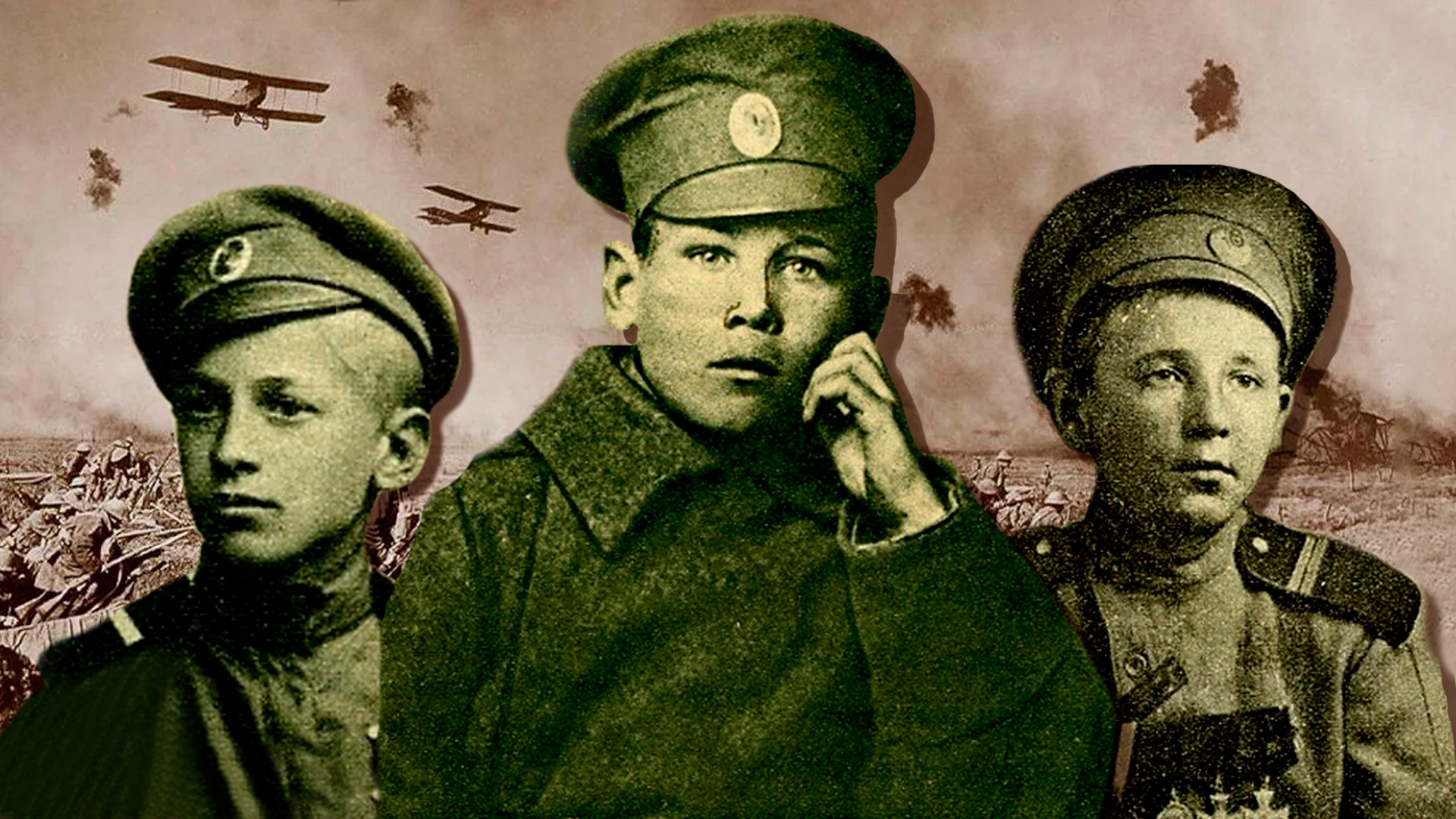 Public Domain; Legion Media
Child volunteers were among the most committed soldiers in the ranks of the Russian army in the Great War. But even their selfless heroism could not prevent disaster.

The Russian Empire greeted the outbreak of WWI with tremendous enthusiasm. Society believed that victory over Germany and Austro-Hungary would be swift and resounding. No wonder then that people scrambled to get to the frontline to snatch a piece of the glory before it was too late. Among them were many under the official draft age of 19. 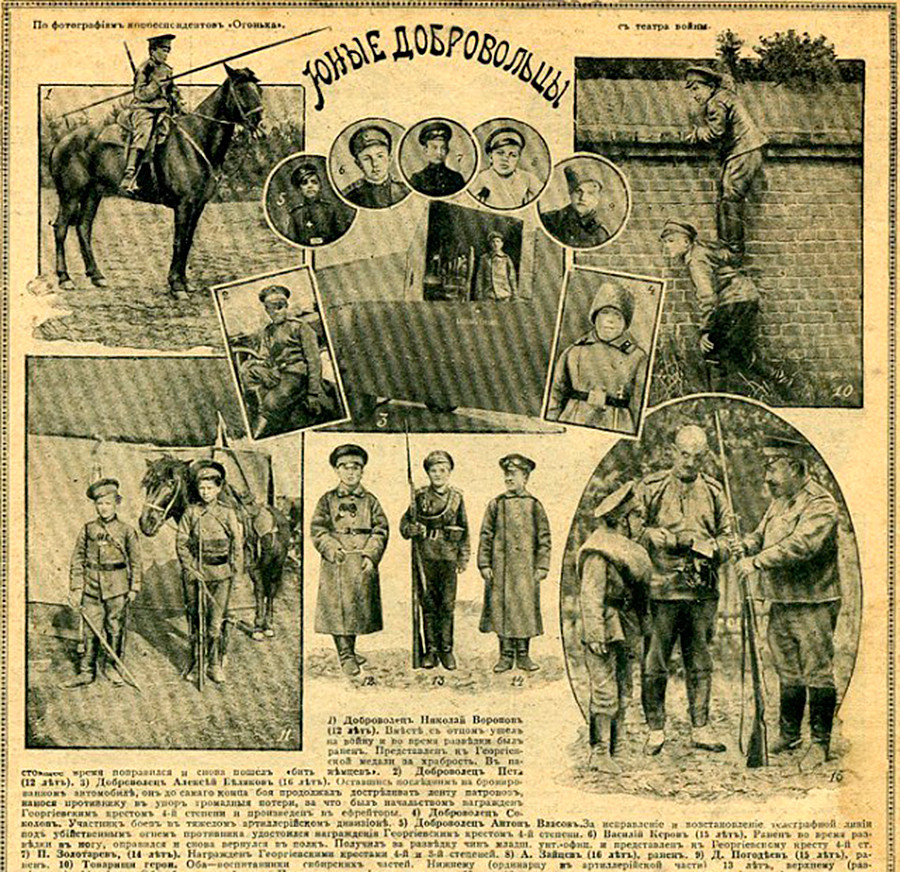 Thousands of children aged as young as nine dropped out of school to go and fight. They came from both cities and villages, alone and in groups. Cadets, seminarians and ordinary schoolchildren were all desperate for frontline action. “Once again, after so many centuries, there is another Children’s Crusade!” wrote Korney Chukovsky in 1915 in his essay Children and War, referring to the youth movement of 1212 at the time of the Crusades. 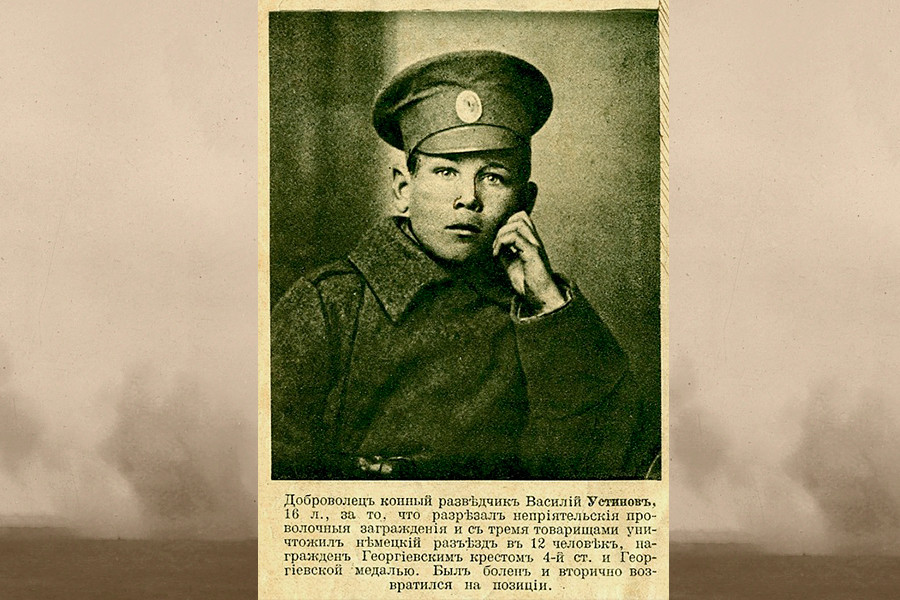 To enrol in the army as volunteers, minors needed the written consent of their parents, which they didn't have, of course. The police caught the young fugitives and sent them home, only for them to run off again. Serving army units were not always pleased to see them. They were often considered more of a hindrance than a help, and no one wanted to take responsibility for them. Soldiers much preferred dealing with orphans (or those who pretended to be), as well as children from the back country. There were generally fewer problems with the parents of peasant kids than of city dwellers. 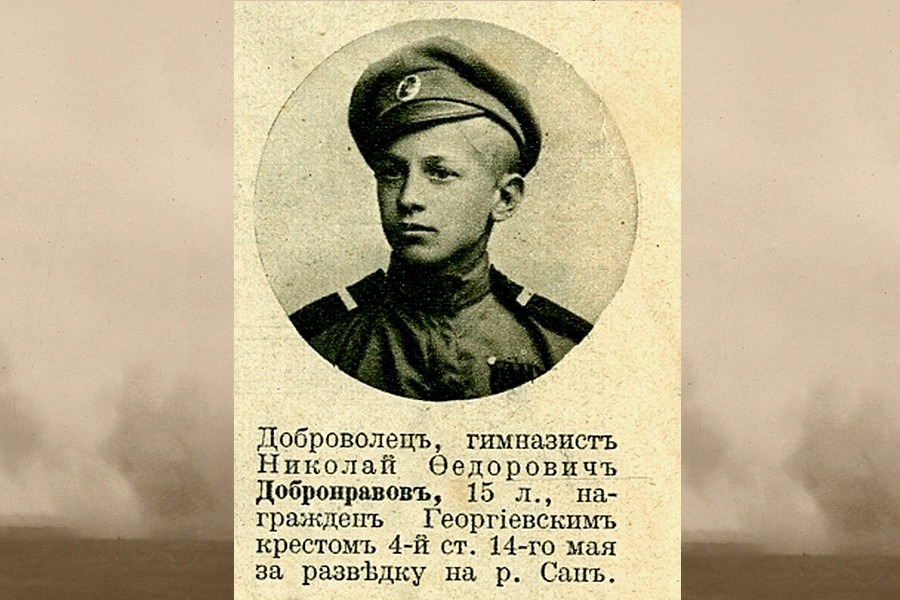 15-year-old Nikolay Dobronravov was awarded the Cross of Saint George for a reconnaissance mission near the San River.

Children who lied their way to the front had another option available to them — it was perfectly legal to join the actively developing state-sponsored scout movement. The scouts, however, operated exclusively in the rear, where they met trains carrying the wounded, helped refugees and soldiers' families, and did agricultural work to cover for peasants who had gone to war. For young fugitives dreaming of hero status, this was not an attractive proposition. 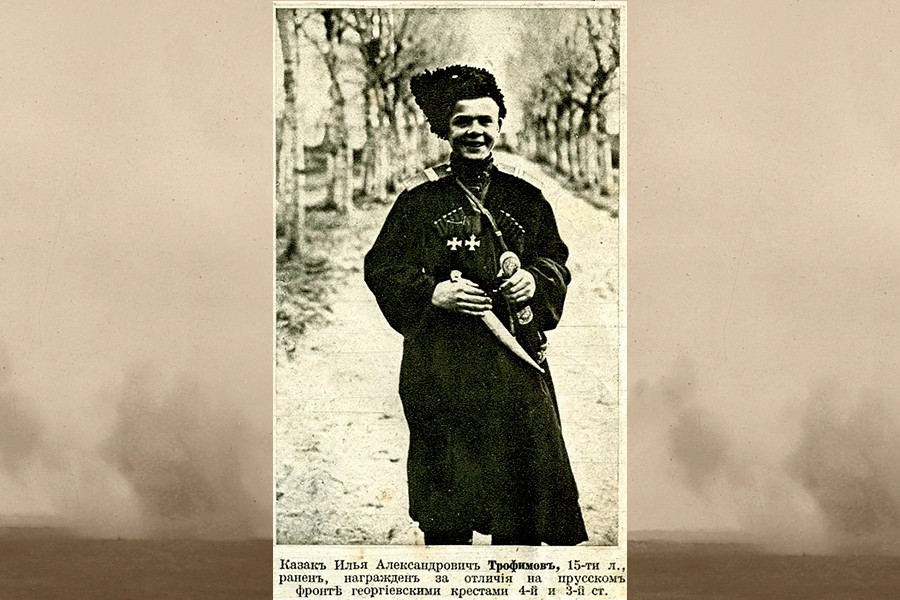 15-year-old Cossack Ilya Trofimov was awarded two Crosses of Saint George for heroism in battles against the Germans.

If a boy managed somehow to be accepted by the soldiers as a “son of the regiment,” his main duties were to carry cartridges, deliver reports to other units and help the wounded. For example, the twin brothers Zhenya and Kolya (surnames unknown) from Odessa became brothers of mercy, looking after the sick and wounded in the hospitals. 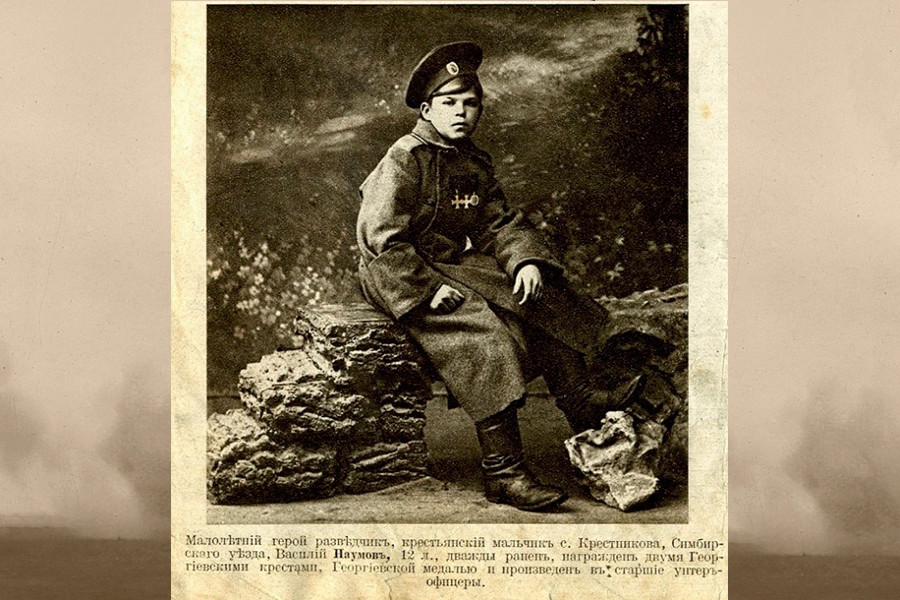 Other child volunteers had more dangerous jobs. They performed invaluable tasks as scouts in enemy territory, since they were less likely than adults to be suspected of espionage. Some also saw action on the battlefield. 15-year-old cadet Georgy Levin not only carried out successful a reconnaissance mission and incapacitated a German artillery gun, but even saved the life of an officer, for which he was awarded the Cross of Saint George. 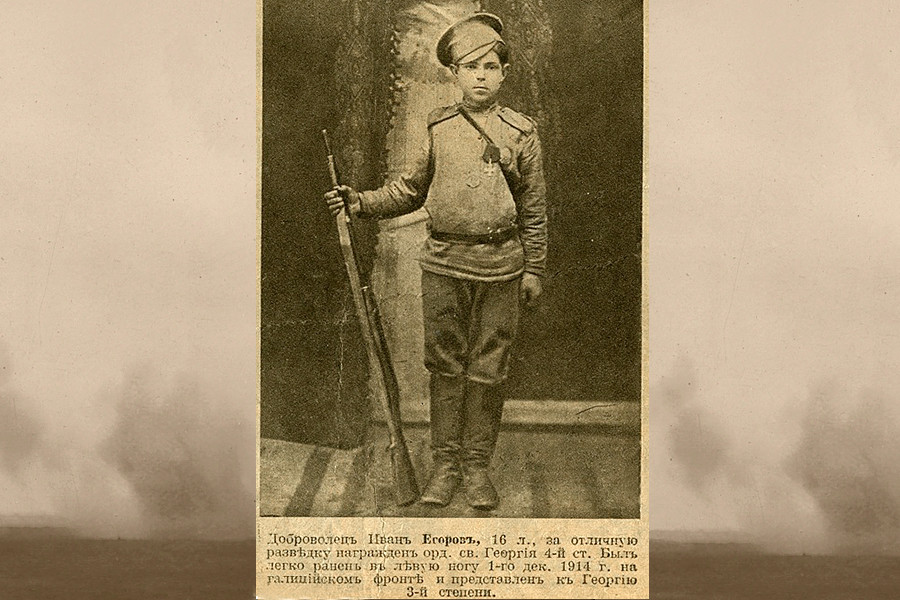 Twelve-year-old Siberian scout Georgy Naumov was twice wounded and promoted to senior non-commissioned officer for bravery. The even younger 11-year-old Cossack Vladimir Vladimirov went to war legally, taken by his father, a cornet in a Cossack regiment. After his father was killed, Vladimir took part in many reconnaissance operations and landed in captivity, but managed to escape. 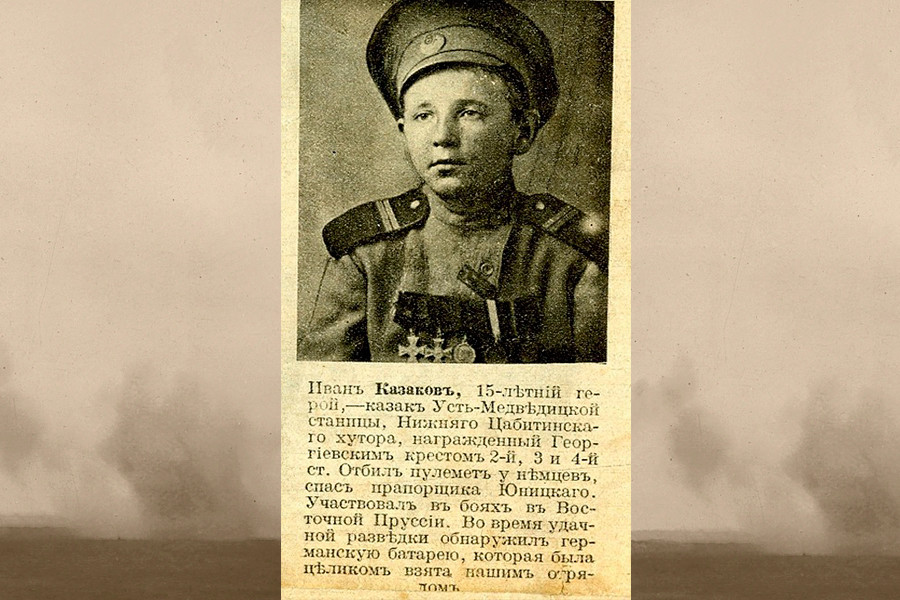 Girls were not far behind boys in their desire to go to war. For the most part, they served as sisters of mercy, but some also fought in battles. In 1914, 14-year-old Kira Bashkirova cut off her braids, took the ID papers of her cousin Nikolai Popov and went to the frontline, where, posing as a young man, she joined the scouts. For a long time, Kira kept her identity secret — until she was wounded and taken to a sickbay. Unmasked, she was sent back to the rear, but allowed to keep her Cross of Saint George for capturing an enemy soldier who blabbed. But Kira was not finished yet. She returned to the army again as Nikolai Popov and was again exposed. After that, the persistent Bashkirova signed up as herself and ended the war in the 30th Siberian Rifle Regiment without the need for dissembling. 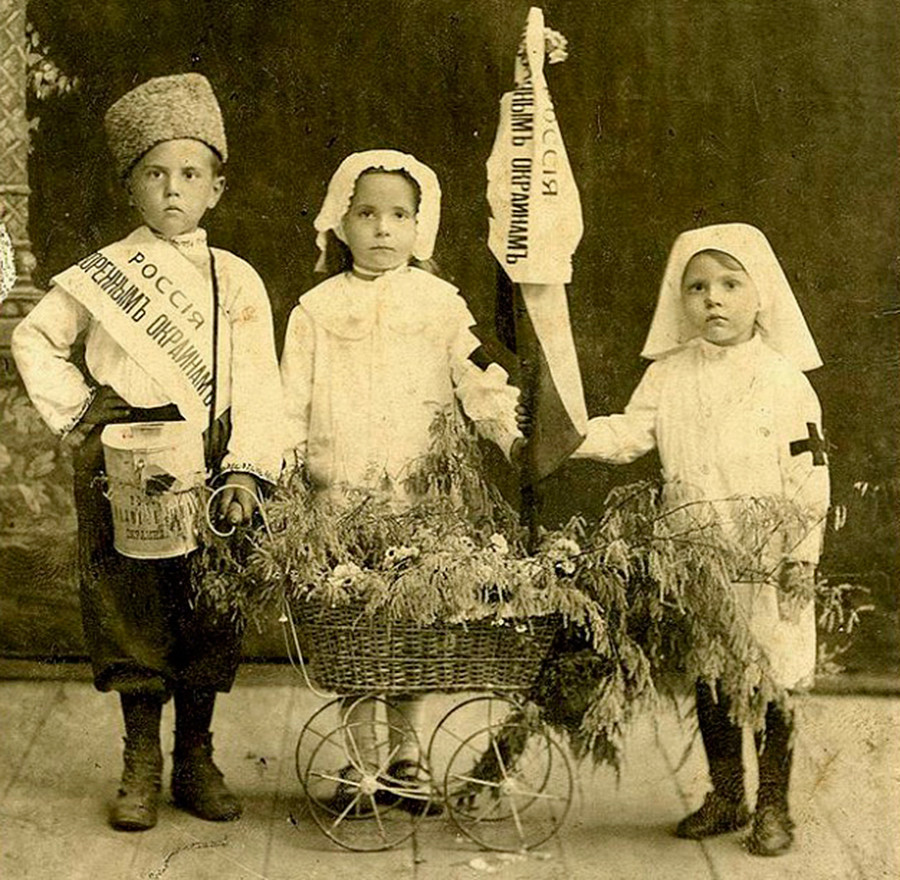 It wasn’t only in the Russian Empire that children were eager to fight. Thousands of British teenagers lied about their age to become soldiers. 12-year-old Sidney Lewis fought in the Battle of the Somme. Adding five years, 13-year-old George Maher joined the army and successfully concealed his true age until one day he burst into tears during heavy shelling. Minors also fought on the other side of the frontline. Patrolling the forest one day, two Russian child volunteers came across a “colleague” of theirs — a 15-year-old German scout armed with a rifle. Lost and confused, he surrendered to them without a fight. 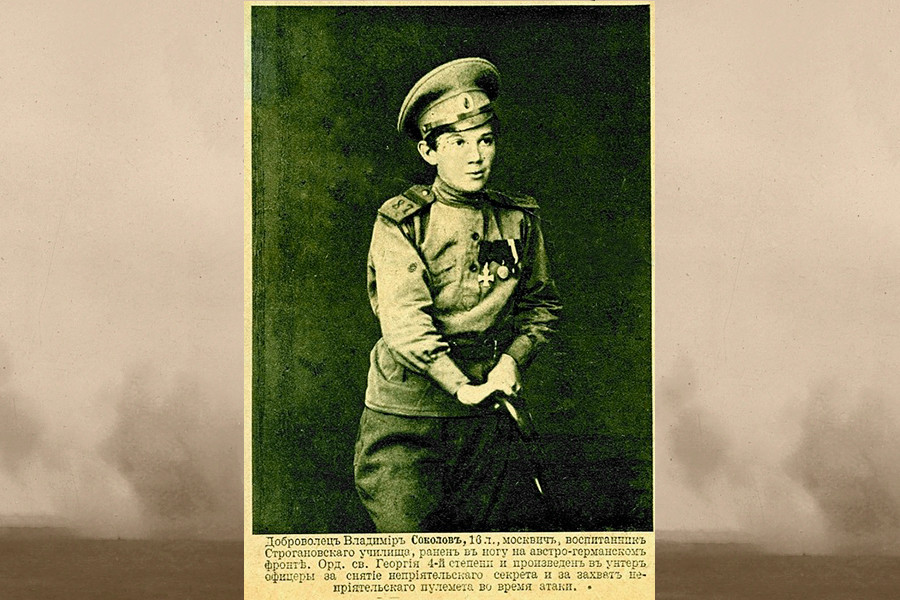 16-year-old Vladimir Sokolov was promoted to senior non-commissioned officer for the disclosure of an enemy ambush and capture of an German machine gun during the assault.

The First World War broke the psyche of adults, never mind children. As reported by the Russian department responsible for refugees, “a boy who lives in an atmosphere of blood and violence develops a pathological state of mind that is unlikely to respond to treatment in peacetime.” A graphic example of this is the story of 14-year-old Tambov schoolboy Vasily Speransky. Having made his way to the front in 1915, he was wounded several times and sent back home. On his return, Vasily’s grades and behavior took a turn for the worse. Having been disciplined several times by the headmaster, he ended up shooting him in the back with a revolver. 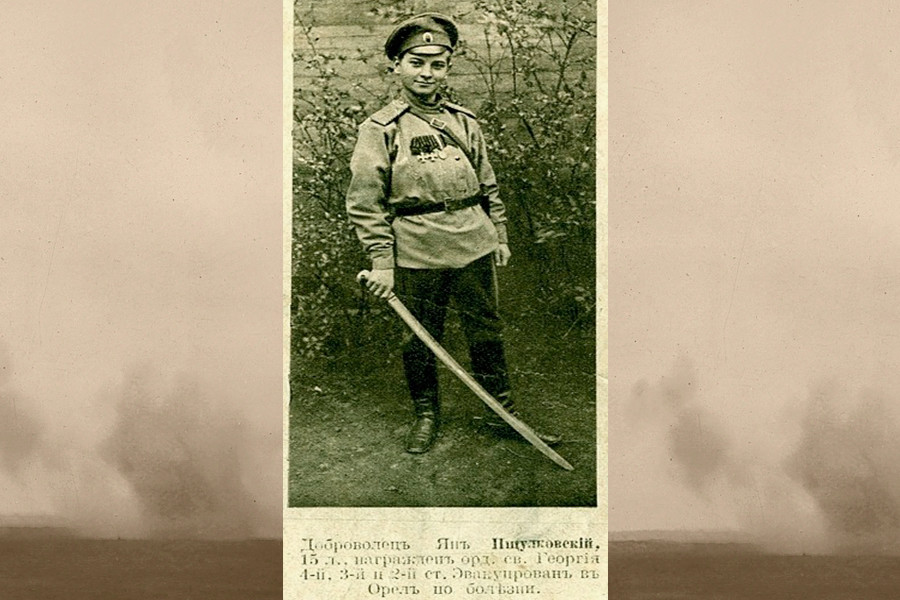 By the end of the Great War, the child volunteers were battle-hardened soldiers. This wasn’t such a bad thing, since a new conflict was already on the horizon: Russia was about to be plunged into the Civil War of 1917–22, one of the most terrible disasters in its history. 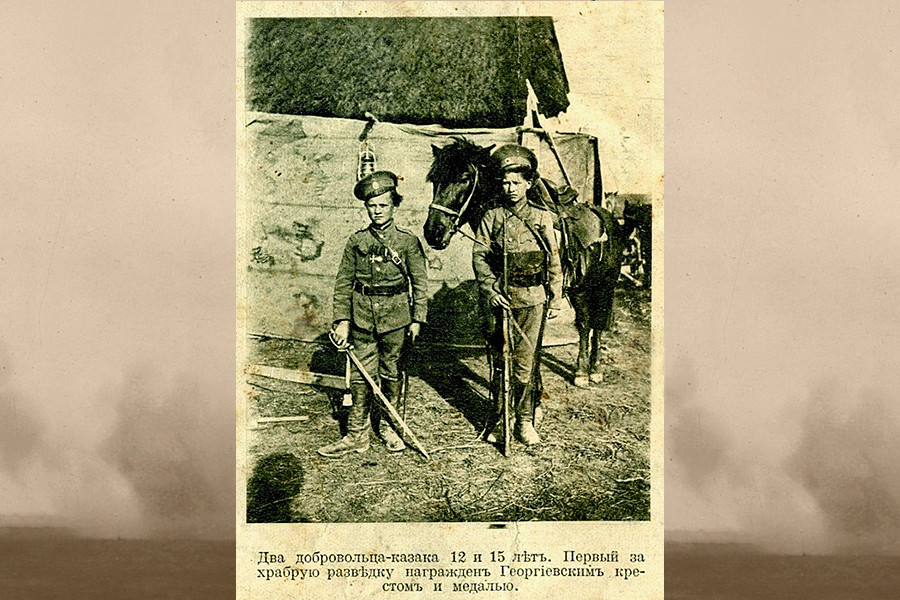