A traditional Russian wedding through a woman’s eyes 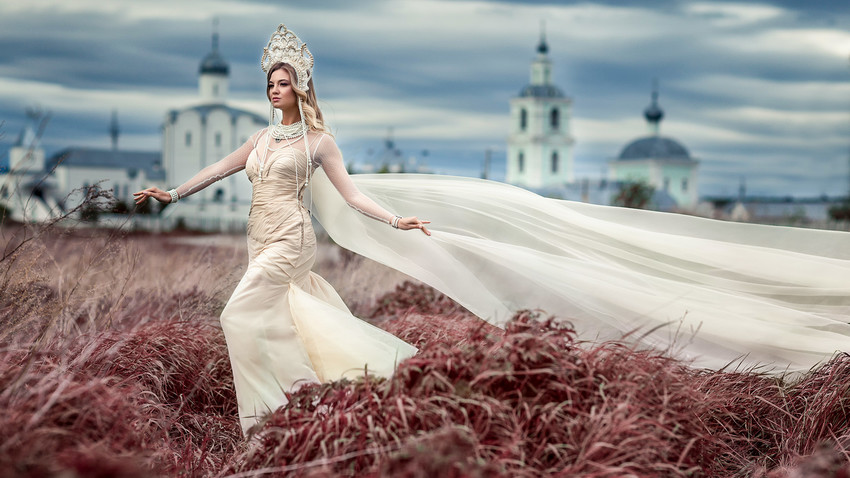 Getty Images
Russian courtship and matrimonial rituals were as complex as they come. Follow everything a 17th-19th century Russian girl had to go through in order to marry her husband, as we reenact the process through three imaginary letters.

In traditional Russia, a wedding was one of the most complex rituals... comparable only to a funeral! Both of them are so-called ‘rites of passage’ – ritual celebrations of a person entering a new phase of life. In reality, a ritual needn’t be complex to be considered a rite of passage: small rites permeate our lives. But there was nothing simple about Russian weddings of the old.

To better understand the intricate custom, follow us on a journey through time and relive it all in the form of correspondence from a Russian peasant girl (who, incidentally, is proficient in the English language) to her English girlfriend.

The first letter: How I met my husband

I’m frightened, Mary. I’m writing this to you as I’m sitting at home, with my bridesmaids, and we’re knitting, singing sad songs, as all girls in the Russian villages do before one of us gets married. With these melancholic songs, we lament the ending of a life before marriage. Not that I should be sad – I’m marrying a handsome, gentle man, after all. But it’s a Russian tradition – the bride’s girlfriends gather at her home shortly before the wedding to support her, spend time with her and symbolically lament her passage from the status of a girl to that of a married woman. This is called a devichnik (девичник – bachelorette party). 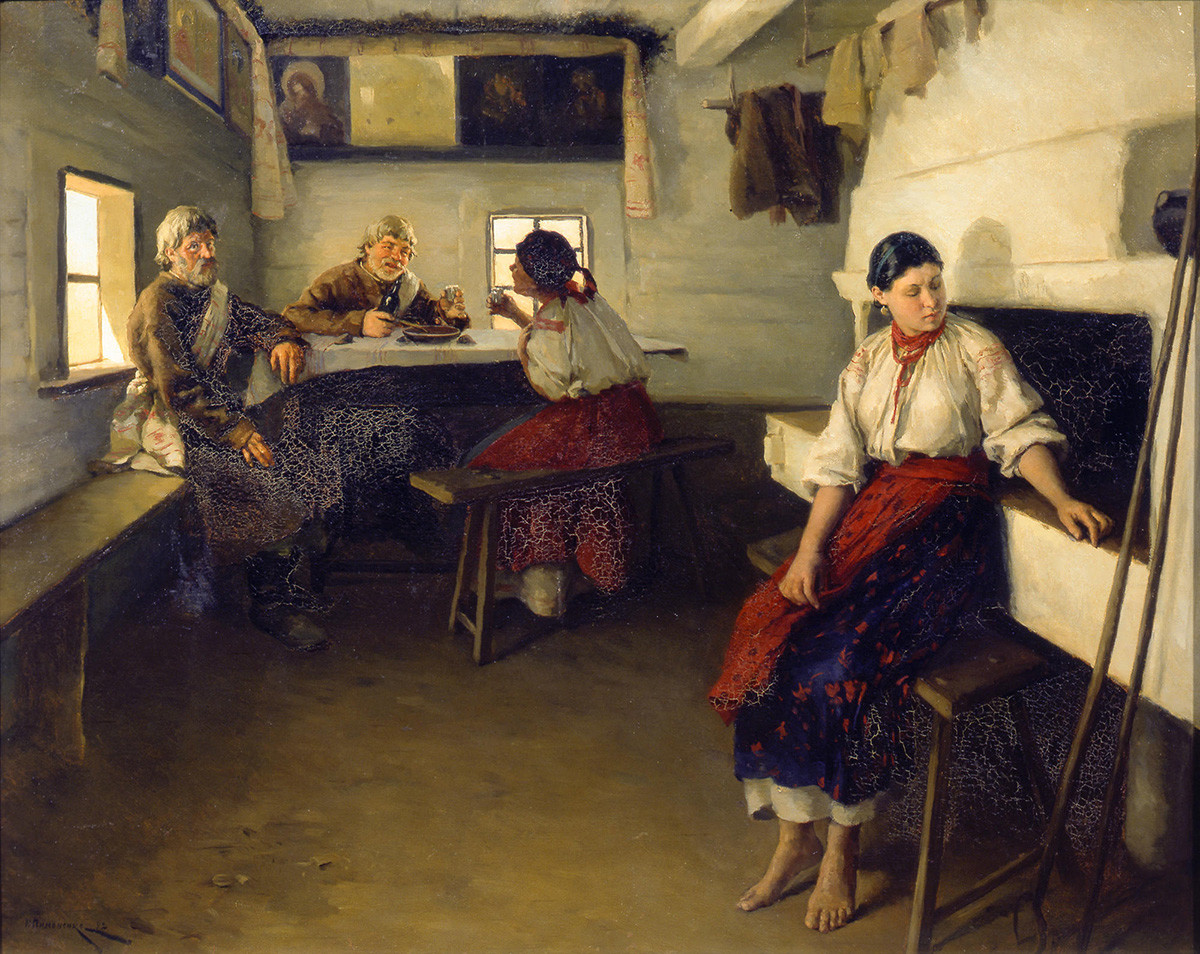 "The Matchmakers" by N. Pimonenko

The Krasnodar Local Arts Museum after F. A. Kovalenko

You asked to know more about Russian courtship and weddings. Well, in my case, it all started this winter, shortly after New Year’s eve, when we got acquainted with my future husband. It was the time of Svyatki, when young people are allowed to gather together in a rented house to play games, charades, and get to know each other better. That is where I first met Alexey – or Leshka, as he prefers to call himself. There were about twenty of us, mostly girls, as it always is in the Russian villages. We drank all night, partying and laughing, and Leshka sat on my lap during one of the games – a sign that he likes me and wants to court me. Later that night, on the front porch, he gave me his red handkerchief, and I knew for certain he wanted to marry.

It wasn’t a swift agreement on the part of our parents. I guess they made inquiries around the village – in Russian villages, the parents have a decisive say on matrimonial matters, because both families lose a grown-up farmhand with it – the young couple must build their own house to live in and maintain.

Finally, one evening, as I slept on the stovetop (as we do here, to keep warm), tired after a day of work in the barn, I heard the svaty (сваты – matchmakers) come inside. I peeked and saw Leshka’s father and godfather, dressed in their best coats, with red clothes underneath, his father with a heavy rod in his hand – that’s how I knew they were there for the matchmaking. They didn’t enter the house, but sat on the bench near the door, and I heard the sacral words: “You have the goods, we have the merchant.” Surely, both families had met before in private and discussed everything, so that visit was symbolic – the matchmakers come at night, so the villagers can’t see them and no evil eye could hinder the sacrament of matchmaking. After a short conversation, our parents prayed together, and the matchmakers left. I knew then and there, the bride-show was going to happen.

The second letter: From the bride-show to the wedding 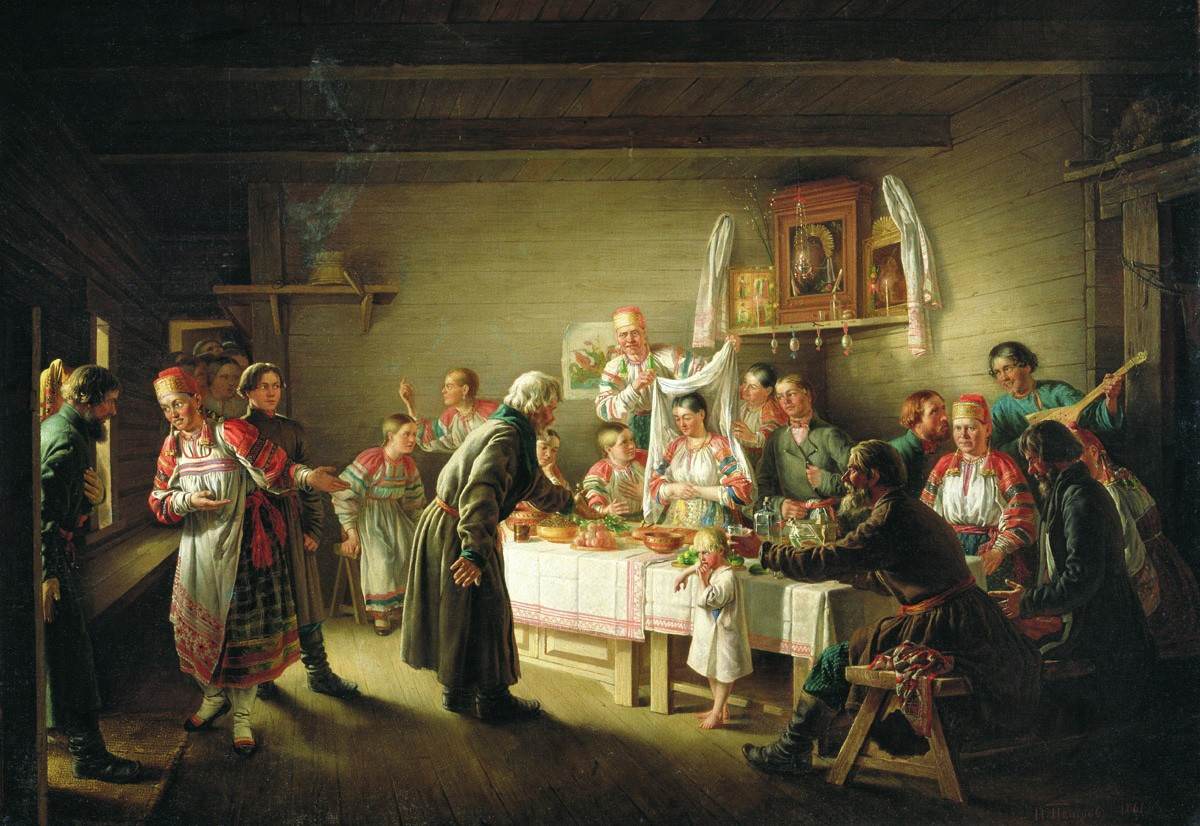 "The Bride-Show" by N. Petrov

Mary, I’m so tired of my girlfriends sleeping around our house all these days! Still, I continue my story. A few weeks passed after the matchmaking – our parents argued about the dowry. I didn’t know if they had argued for real, but anyway, it’s unbecoming for Russians to rush through the process of matchmaking. Finally, my mother started preparing me for the bride-show.

The day came in spring. Leshka and his parents first cruised in their carriage, decorated with bells and red ribbons, across the village (to ward off evil spirits), and finally, came to our house. This time, I first saw Leshka in his best attire, his hair combed meticulously, and how fair, how handsome was he! His parents inspected our house, barns, our yard, praising my father for his prudence and frugality. Then, our fathers slapped hands in agreement, took out a big iron lock, locked it and threw away the key, giving the lock to the newlyweds for safekeeping. The agreement was now done, and I went to tell my girls it’s time to gather for a devichnik.

Tomorrow, it’s a week that they’ve been staying here. Just yesterday, the girls took me to the bathhouse and washed me, as if I was a corpse – indeed, this is a symbol of myself dying as an unmarried girl and being reborn as a bride. They sang haunting songs and poured the water they washed me with outside behind the bathhouse, where the evil spirits dwell. They divided my long, thick braid into two new ones, which means that now, one braid is for me and the other one is for my future offspring.

I’m so tired of these solemn proceedings! But my old granny is pleased that we do everything as it was done in the times gone by. In the evening, Leshka and his guys came, drunk and jolly – this week, they’re having a bachelor party. But he collected himself and gave me and my girls small gifts – fancy tin rings, sweets, hair combs and ribbons. Forgive me, I have to finish this letter and go to sleep. The wedding is the day after tomorrow – so I’ll write to you shortly after. I can’t see the writing through the tears. It was surely good just to be a carefree girl…

The third letter: A wife is a wife 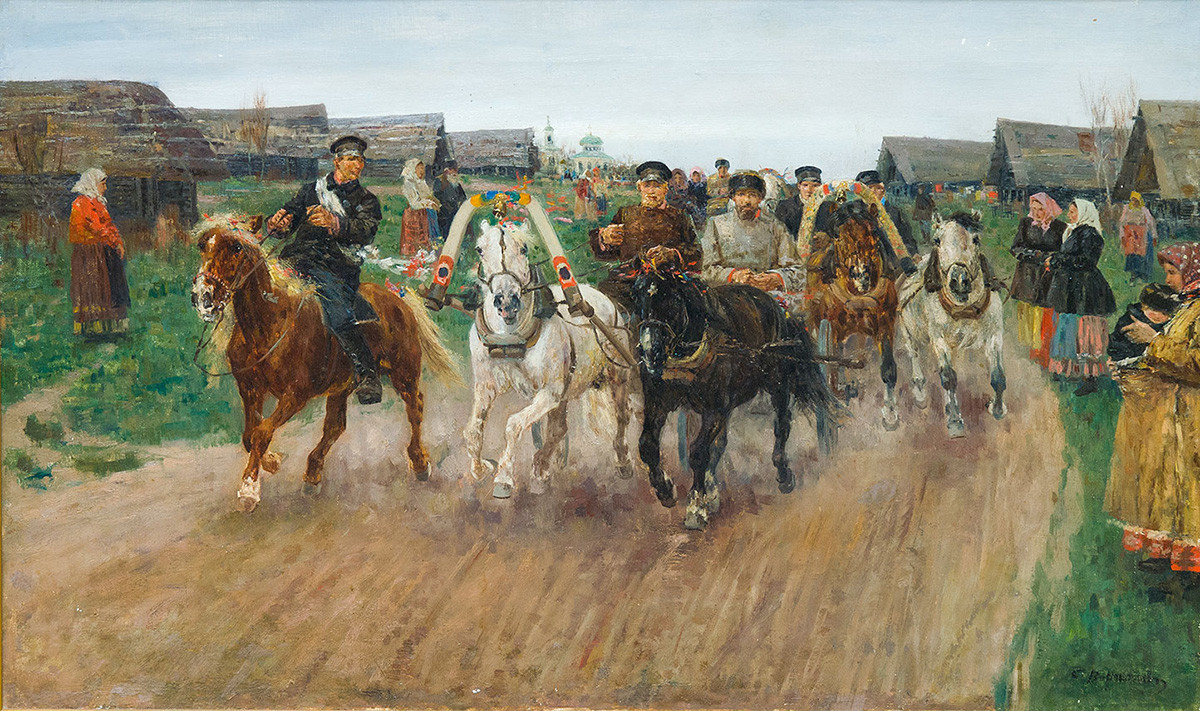 "The Russian Wedding" by S. Voroshilov

Mary, I’m sorry for the delay. Just finished all my chores, which normally consist of cleaning the house, spinning yarn, and other activities, as required – I’m a full-time wife now, so I took this short break to write to you while Alexey has gone to the fair, because he is a counterman in his father’s steel and iron shop in our town.

The wedding started early in the morning. I was getting ready to meet the guests in my mother’s wedding dress (well, our granny wore it, too, to her own wedding) – the most beautiful dress in the village, they say! The wedding procession arrived with such noise! All his family, relatives, friends appeared – some of them on horseback, some in their wagons and carts, crowding the wide central street of our village... Leshka’s friends rode upfront, shouting, some of them blowing horns to drive away dogs, beggars, and ready to beat anyone who dares cross the procession’s way. The only one who was allowed to do so was my mother, who stood next to a thick log, blocking the way to our front yard.

"A Peasant Wedding in the Tambov governorate" by A. Ryabushkin

No sooner did the procession enter the yard than Leshka himself presented my mother and father with a big jar of fermented honey and three bottles of the purest moonshine he and his father brewed – the wedding ransom. After that, I sat in his carriage and we headed to the church together with our parents, while most of the procession rode to Leshka’s house, where the table was already full of the best treats and dishes you could imagine…

Our local priest (we in Russia call him batyushka – father) wed us, with shiny gold-dusted crowns over our heads, and then we rode back to Leshka’s house. Everybody there was juiced already – me and Alexey were the only ones who were obliged to stay clean sober during the whole ceremony. There were so many friends, relatives and neighbors that I could hardly count them all! The main room of Leshka’s house was so packed with people that he and I had to sit on the top of the stove – strange, but granny said it’s an important tradition, which means I’m now the ‘master’ of his stove! And indeed I am, as I’m cooking food for him even as I write this letter. 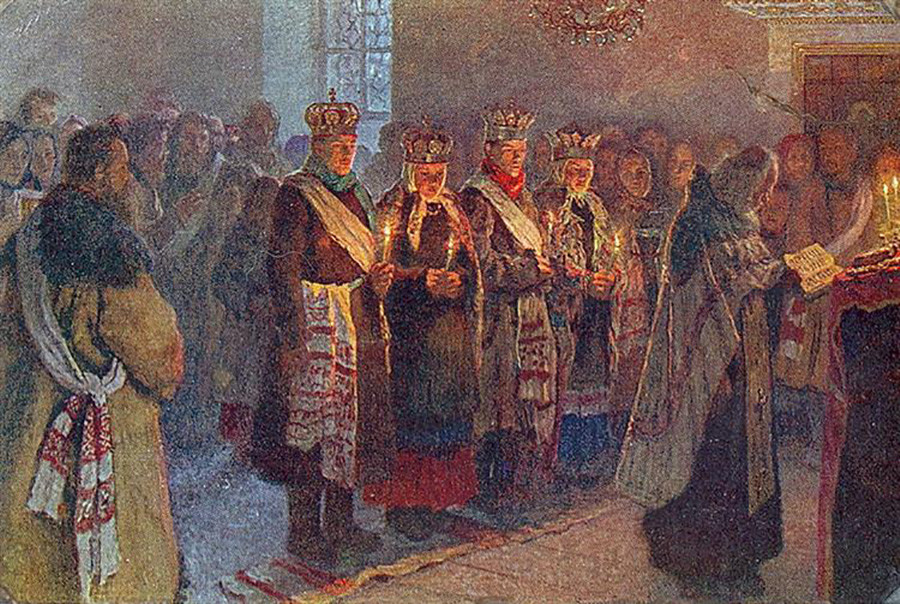 "The Wedding" by N. P. Bogdanov-Belsky

Married life is not so bad after all, Mary. The most embarrassing moment came, however, in the morning after our wedding night, when our relatives rushed into our room and took our bed sheet from underneath us, to, erm, prove to the parents and grandparents that this thing indeed happened between us. I was a girl – now, everybody knows I am a woman and a wife. Goodbye, Mary, and I hope your British wedding will not be as complicated!