Russian Svyatki: The most unholy time of year

Participants jump over the fire at the Svyatki 2017 festival of entertainment and fun in the Chelyabinsk Region.

Aleksandr Kondratuk/Sputnik
Even the Orthodox Church couldn’t ban the old pagan tradition of Russian winter feasting. During this period, spirits and the devil would run wild — so too the kids.

Svyatki is the period from Orthodox Christmas Eve (Jan.7) to the Epiphany (Jan.19). Traditionally, Russians all over the country would spend these two weeks doing crazy things, forgetting about work, and celebrating. But why?

Many cultures observe the winter solstice as the start of the new astronomical year. From this point, the days become longer and ancient people believed this represented the birth of the New Year. In turn, they thought all fate for the upcoming year was being defined. This is why Svyatki was treated with such importance.

Russians would feast until the point of excess during this time in the hope that the next 12 months would be fruitful. For Russian peasants who toiled in the fields all year round, the celebrations were a valuable break. 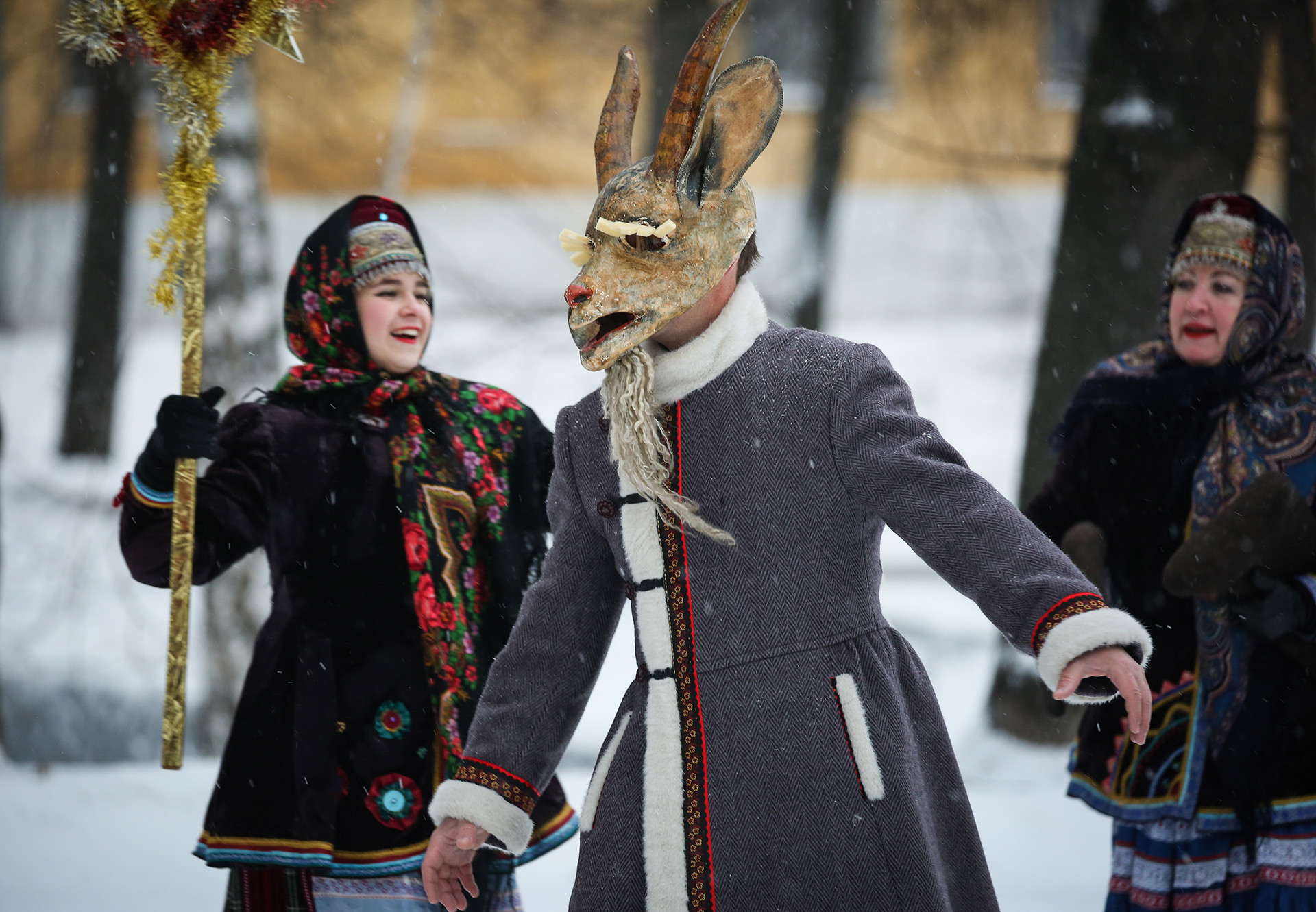 The name Svyatki comes from the word svyatoy (“holy”), but ironically this was the most unholy and pagan time of the year. Russians believed the period between the birth and baptism of Christ was “a time without the cross.”

“God, rejoiced after his son was born, opened all the doors and let the devils out to play,” the folk legend goes. Work was banned during Svyatki, especially for young people — they were busy acting as imps and spirits. To do this, guys (and some brave girls) put on scary masks and asked for treats all over the village. The “devils” wore old rags, fake beards, pointed leather hats, sang and shouted loudly, and played simple instruments — scaring the villagers. But you had to welcome them and offer treats or the year would be unlucky, a bit like Halloween. But in Russia, even if treats were given, tricks were played nonetheless, usually later in the night after people had gone to bed.

During Svyatki it was believed the dead would visit. On the eve of large feasts like Christmas, New Year, and the Epiphany villagers didn’t take any food away from the table so their deceased ancestors would have something to eat as well. Also, acting out funerals was also very popular in most villages. Here’s how it went:

A boy dressed in a shroud sporting false teeth made from a turnip and flour on his face (so he resembled a dead man) would be tied to a bench. A fake priest with a clay thurible filled with a smoking mix of moss and manure would hold a mock funeral service with “prayers” (just swear words). For the “wake ceremony,” everybody would get a slice of dried manure. This crazy rite symbolized the funeral of the past year.

The problem was that very few people would be willing to host such a bizarre/disgusting ceremony in their house, so the youths would look for an old izba (traditional wooden house). They usually played all sorts of games in these houses where they were able to run amok. In one game during Svyatki, girls would act as mares, while guys would examine them and choose one; they would then kiss their mare and place her on their knees. In another game, one guy would act as a bull, wearing a clay pot with real horns and butt girls below the waist, until another guy “kills” the bull by breaking the pot.

Also, games like “wedding” or “a barin (nobleman) chooses a bride” had an errotic undertone and involved grabbing and groping girls — this behaviour was only allowed during Svyatki, often under the watchful eye of adults to make sure things didn’t get too out of hand. Sometimes lads from the next door village would rock up to try their best chat up lines on the girls, but if they didn’t bring enough vodka to soften up the locals fights would usually ensue. 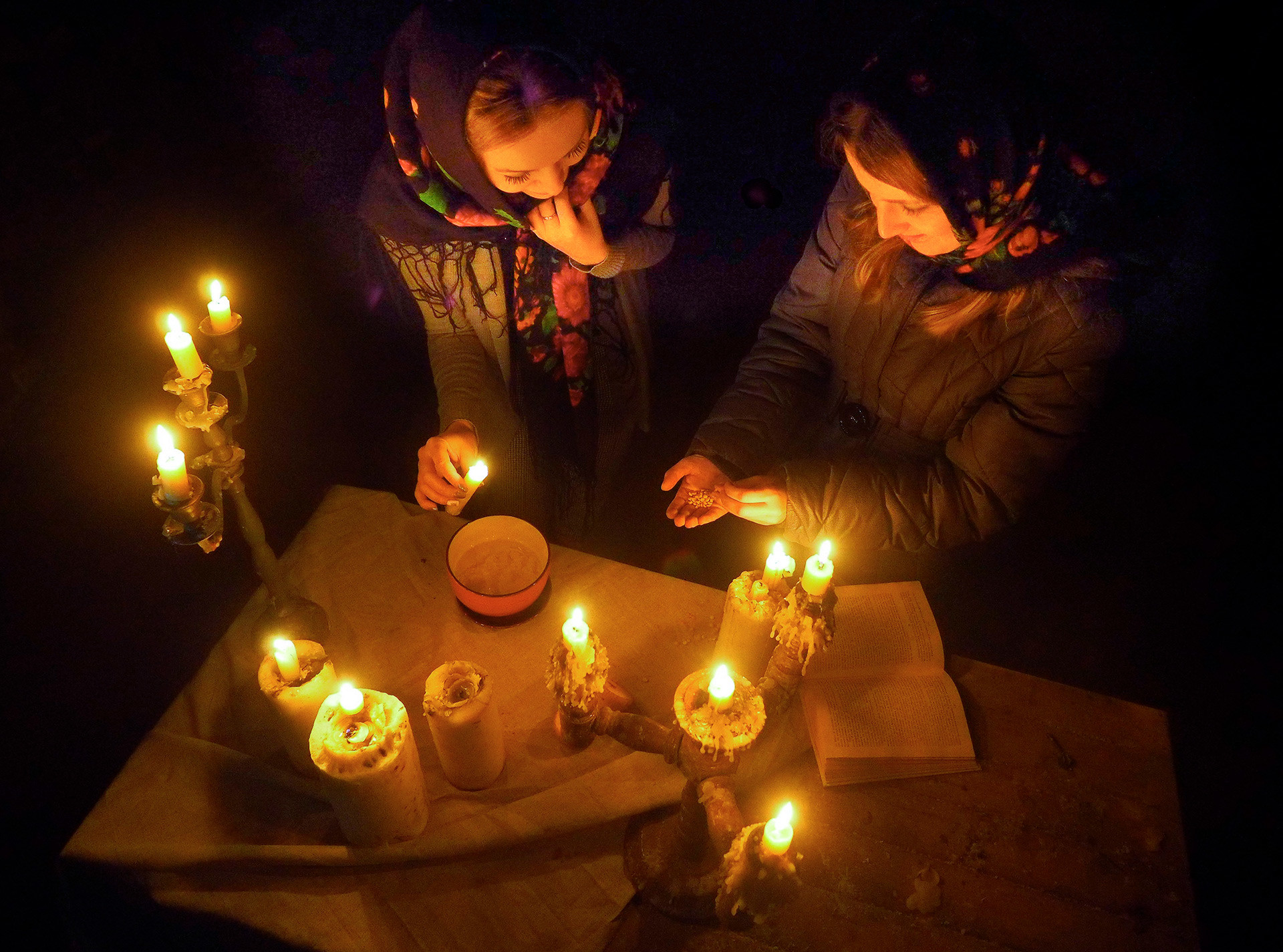 Girls had their own pastime — fortune telling. Condemned by the church, such contact with the netherworld was also only allowed during Svyatki. The aim of all fortune telling was to guess who would be their groom. Fortune telling was practiced on crossroads, in bath houses, near rivers — anywhere spirits apparently lingered.

At midnight, girls would venture onto the crossroads and listen — if a song or laughter was heard their family life would be happy; if nothing was heard, then a life of sadness awaited.

A girl could also go to the river and look into an ice hole under moonlight: There was a chance the devil would show himself in the guise of her future groom. It was important to take a crucifix, knife, or poker when doing this to ward off evil spirits. Sometimes, girls would even take a rooster with them and if they became scared would pinch it, forcing a shrill cry that would drive the devil away.

When stealing is not a crime 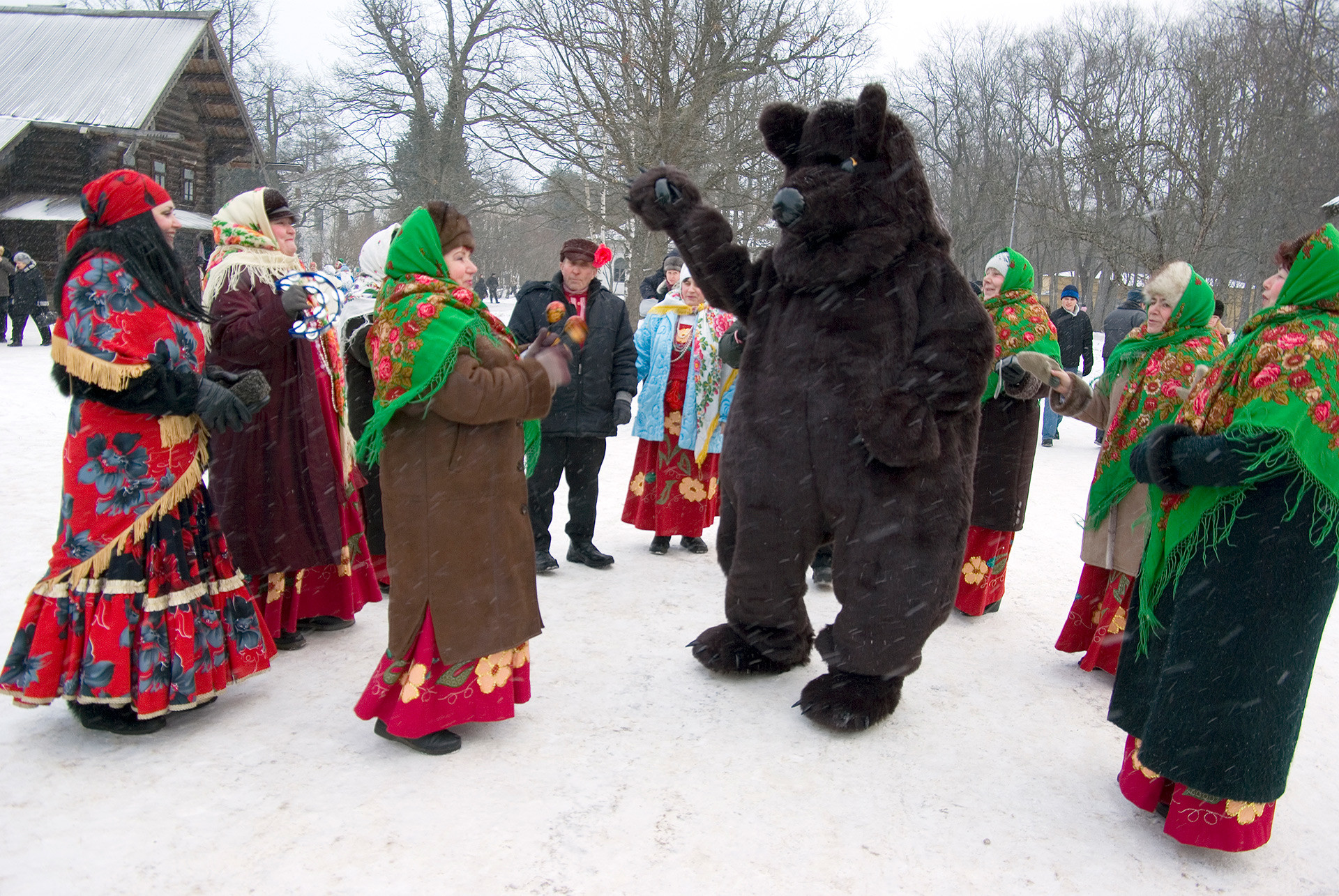 Christmastide - the festival season from Christmas Eve till after New Year's Day. Festival devoted to Christmastide in Novgorod the Great is usually held near the Vitoslavlitsy Museum of Wooden Architecture. Novgorod. Russia.

Young folks would often play pranks on their neighbors while heading home from these get-togethers that usually ended after midnight.

These “imps” would sneak into izbas to turn over barrels with dough or water; smear passersby with soot; wake people up by knocking on their doors; smear manure on people’s heads as they looked out the window to check what was going on; steal stuff; the list goes on, so many wonderful pranks to play in a sleep winter village.

Sometimes, these practical jokes could prove rather costly: chimneys might be blocked with litter and sleds or wagons would have to be towed from forests where they’d been hidden. But the adults usually understood, after all, they were kids once!

To dig deeper into Russian New Year celebrations, find out more about Russian fortune telling in our review or look at the most popular Russian festivities!