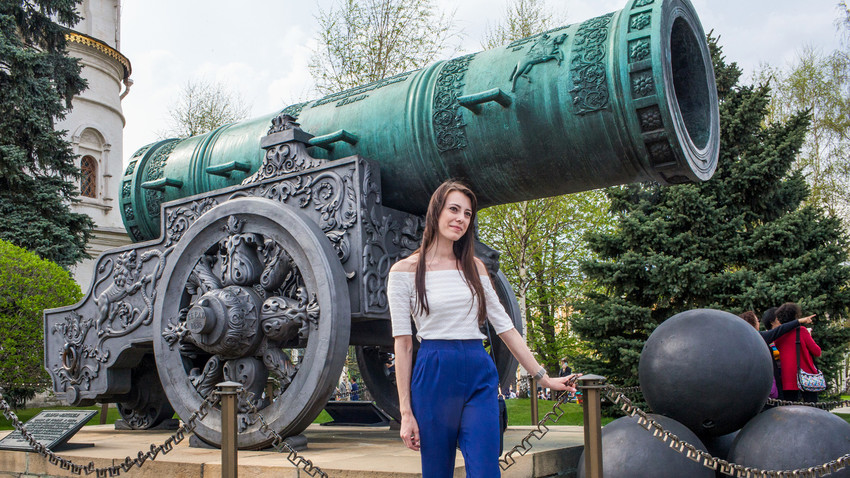 Legion Media
Russia has used heavy artillery against its enemies since the 14th century. Here are the most imposing cannons of those times preserved in museums in Russia and abroad.

When Ivan the Terrible took Kazan, the capital of the Kazan Khanate, in 1547-1552, the decisive victory was achieved only with the help of heavy artillery, operated by foreign army engineers (Italians and Germans) at the Russian service. Even earlier, in 1480, Grand Prince Ivan III of Moscow managed to win the standoff against the Khan Akhmat of the Golden Horde using heavy artillery commanded by Aristotle Fioravanti, the Italian engineering genius. But Russians had started using their own artillery from the 14th century. 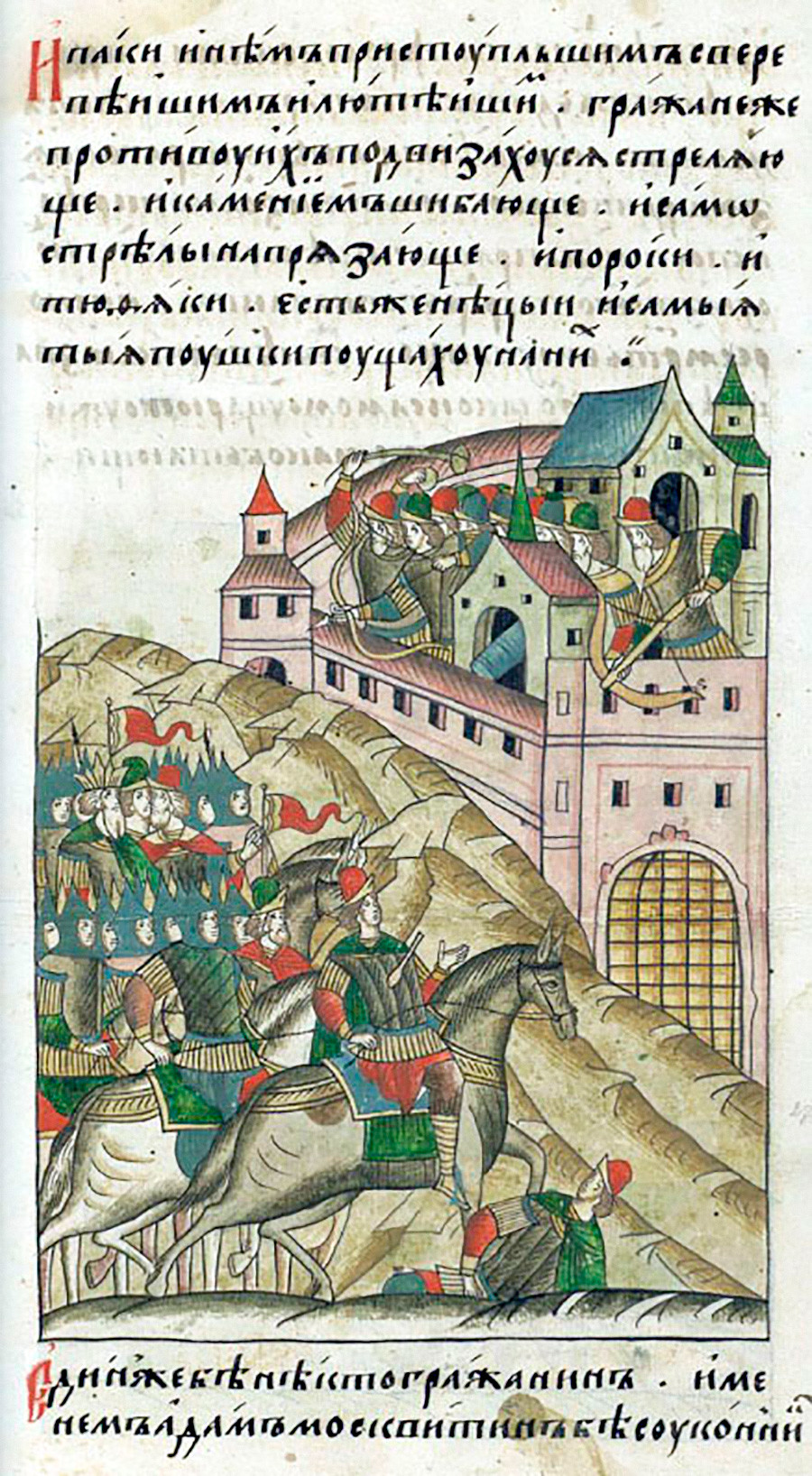 Khan Tokhtamysh's siege of Moscow, 1382. A 16th-century chronicle illustration. A fortress gun can be seen pictured in the central tower of the city wall.

As early as 1382, when the army of the Duchy of Moscow defended the city against Khan Tokhtamysh, the chronicles mention the use of personal firearms and fortress artillery. Although the production of gunpowder had been known in Russia since the 14th century, locally-produced guns were largely ineffective (by the way, Tokhtamysh took Moscow in 1382, which suggests the guns didn’t deter the Tatars). 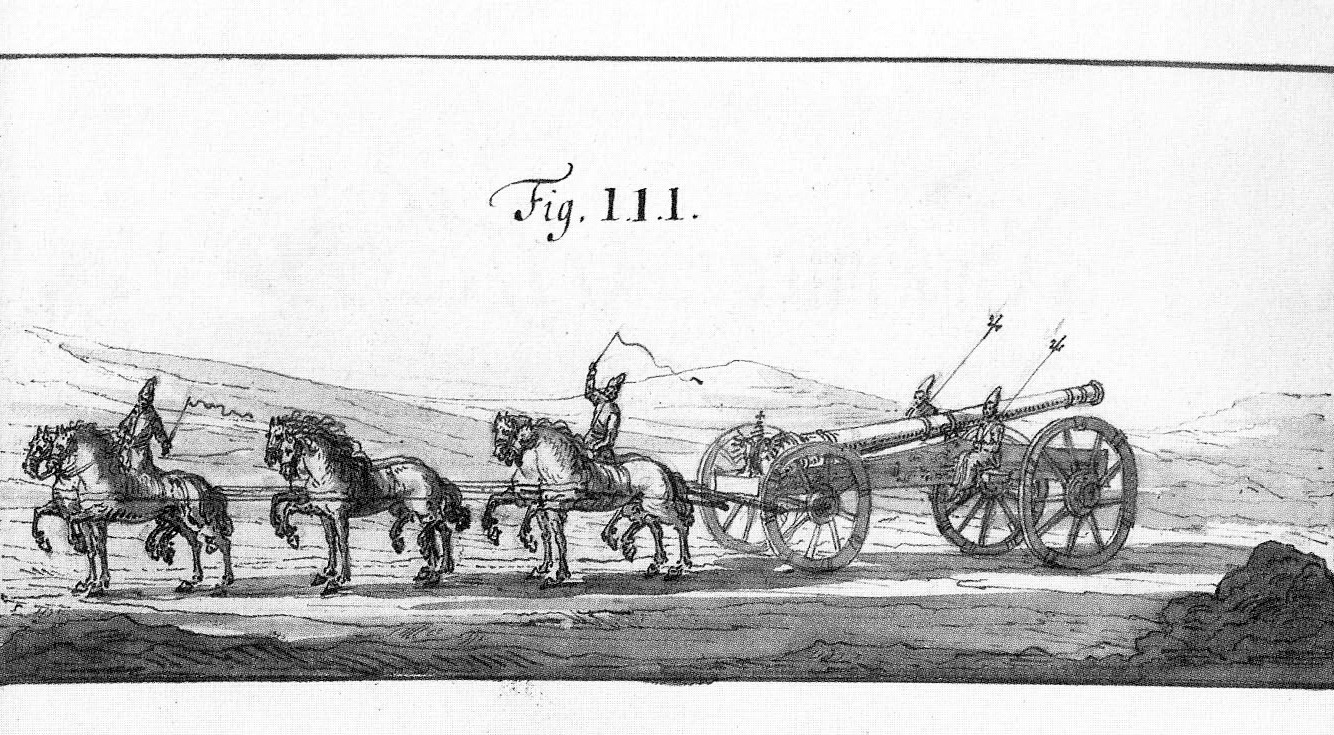 The first effective guns were brought to Russia from Poland and the German lands in the late 14th to early 15th centuries. By the beginning of the 15th century, all major Russian fortresses had cannons to protect them. Still, the Russians weren’t proficient in the use and production of cannons. The first Russian gunsmiths tried to imitate European cast-bronze cannons, making forged-iron cannons, but these guns often exploded because they weren’t fully hermetically sealed. 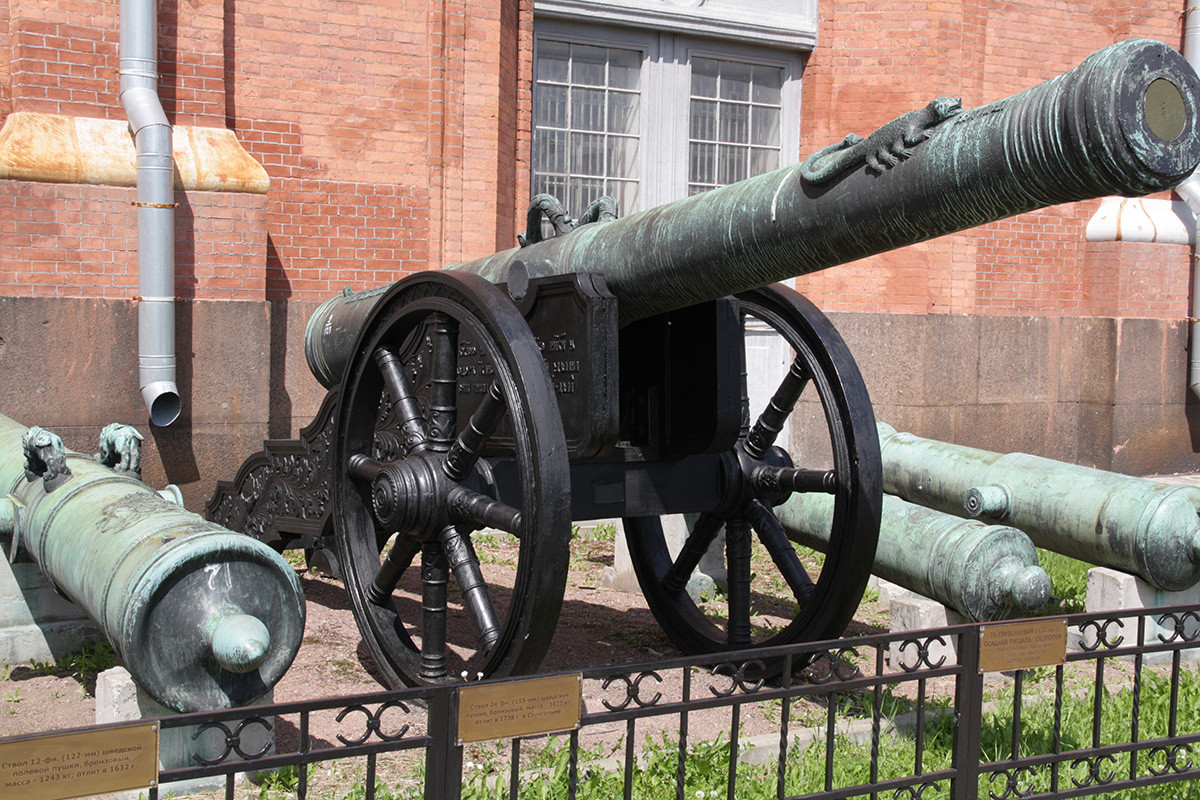 Cannon "Skoropeya" ('The Evil One'), by Andrey Chokhov, 16th century. The Artillery Museum in St. Petersburg.

In 1475, Grand Prince Ivan III of Moscow invited Aristotle Fioravanti, a seasoned Italian architect and engineer, to Moscow. Aristotle founded a gunsmith yard inside the Kremlin, where he taught Russians to produce gunpowder according to European techniques, and drafted designs for the first Russian cast bronze cannons. Also, Aristotle’s presence in Moscow (and, not in the least, his salary, probably one of the highest in Russia) attracted other Italian engineers and gunsmiths to Moscow. 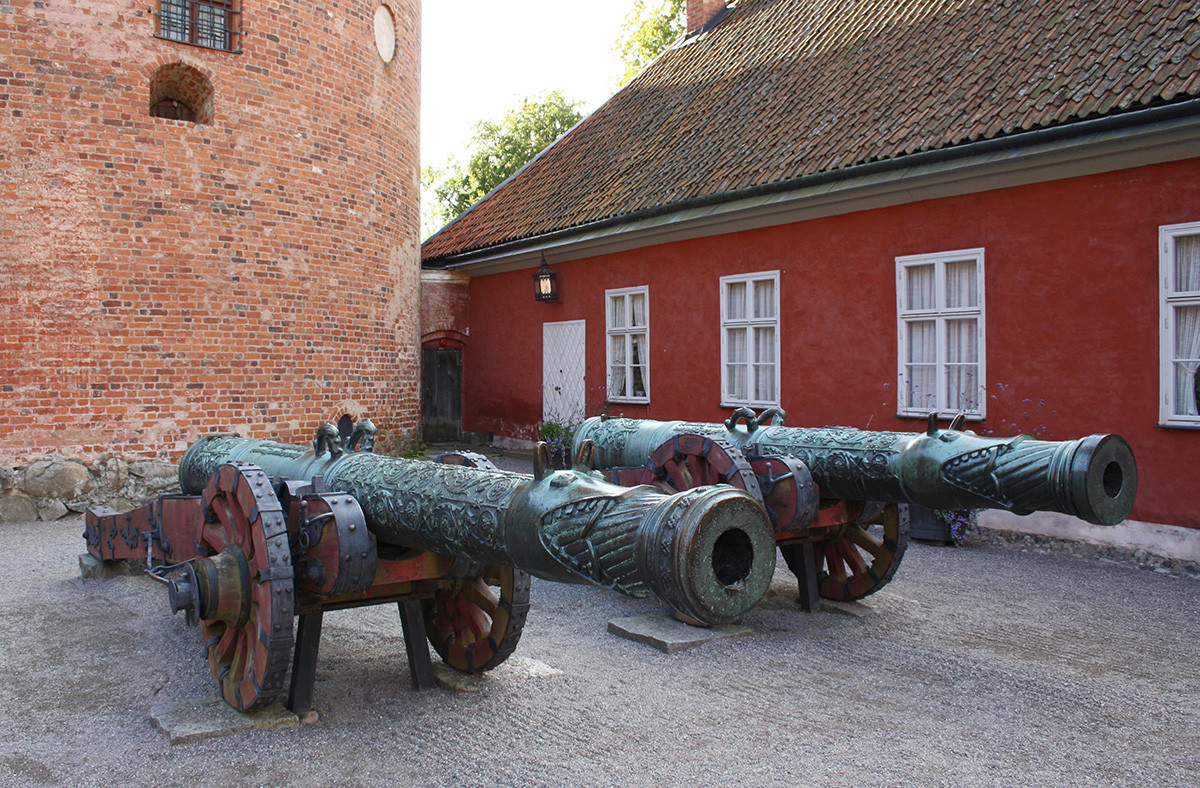 Aristotle also taught Russians to operate cannons and mortars, to transport and load them swiftly. He commanded artillery regiments during Ivan III’s siege of Novgorod of 1479: “The guns were firing ceaselessly because Aristotle was a master of his craft,” a Russian chronicle says. In 1480, Aristotle and his guns helped to win over the Tatars in the Ugra standoff. 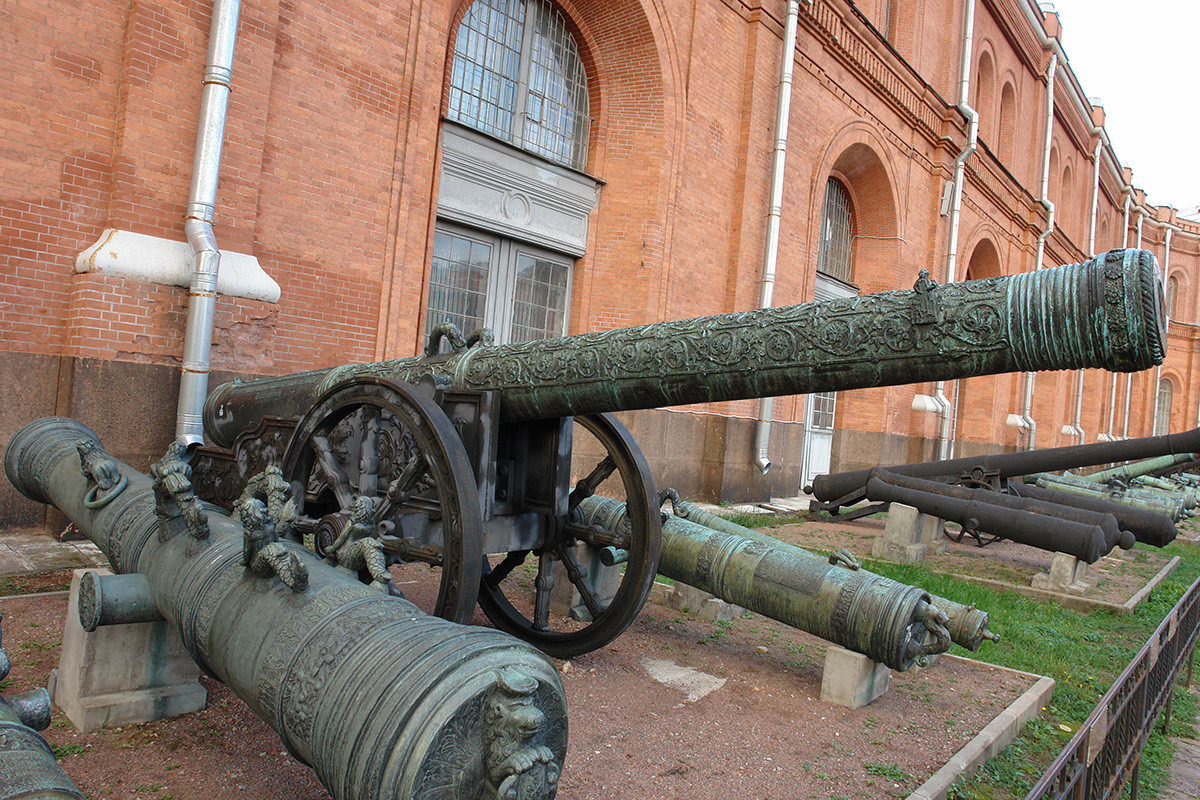 By the mid-16th century, the Moscow Gunsmith Yard was fully operational and located near Lubyanka in Moscow (not far from the Kremlin), and there was a special institution called Pushechny Prikaz (‘The Ministry of Cannons’) to control gun production, located inside the Kremlin. 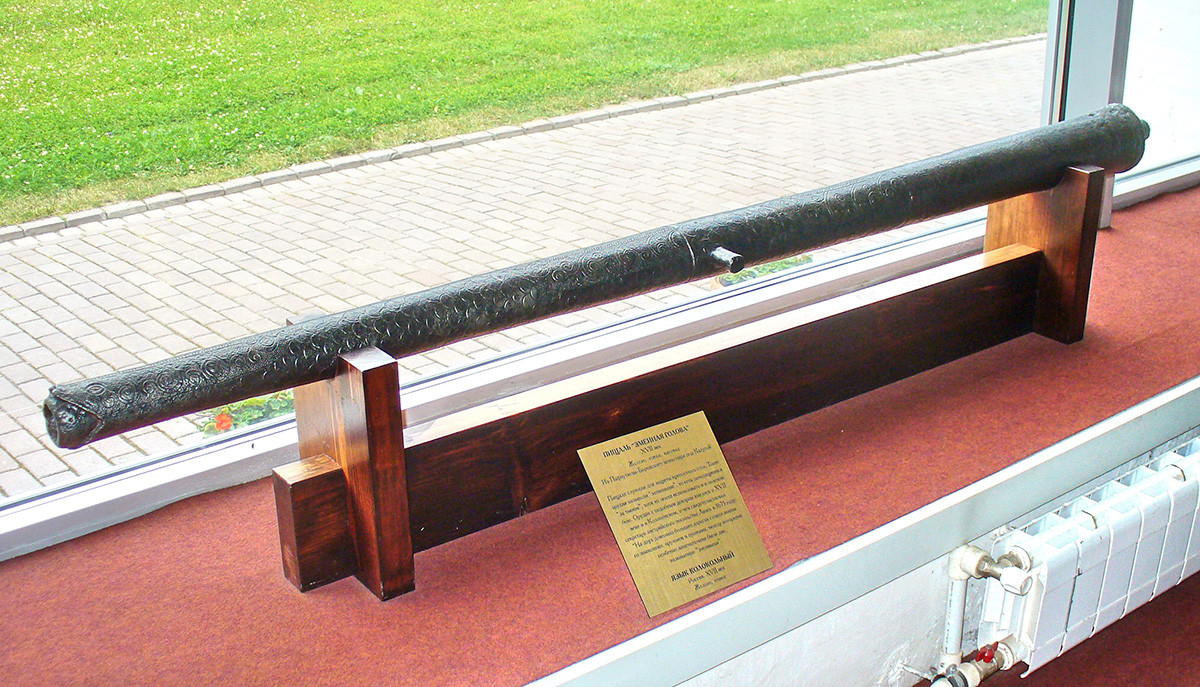 Andrey Chokhov (1545-1629) was the most prominent Russian gunsmith, who is famous for creating the Tsar Cannon (to this day, it’s the largest artillery piece by caliber in the world). During his lifetime, he designed over 20 cannons, mortars, and bombards (early cannon). What is more, Chokhov schooled several gunsmiths who continued creating cannons in the 17th century: among them Semyon Dubinin, Pronya Fyodorov, Grigoriy Naumov, and others. 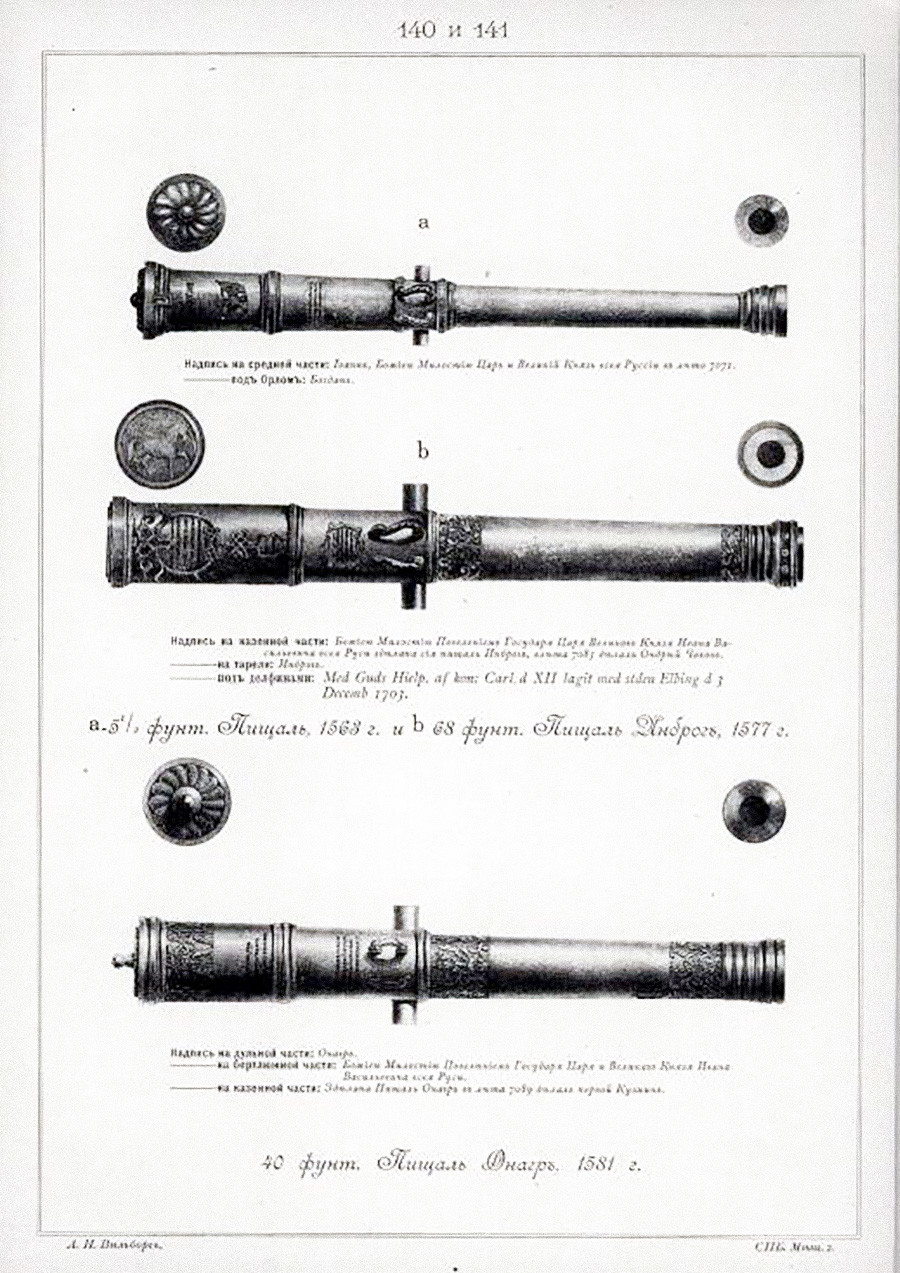 The draft for the "Onagre" cannon, 16th century

Unfortunately, many historical guns were melted by Peter the Great during the Great Northern War, when Russia suffered a shortage of iron and bronze for producing more up-to-date artillery. Still, several guns of the 15th and 16th-17th centuries have been preserved, as illustrated here.