How the Italians built the Kremlin 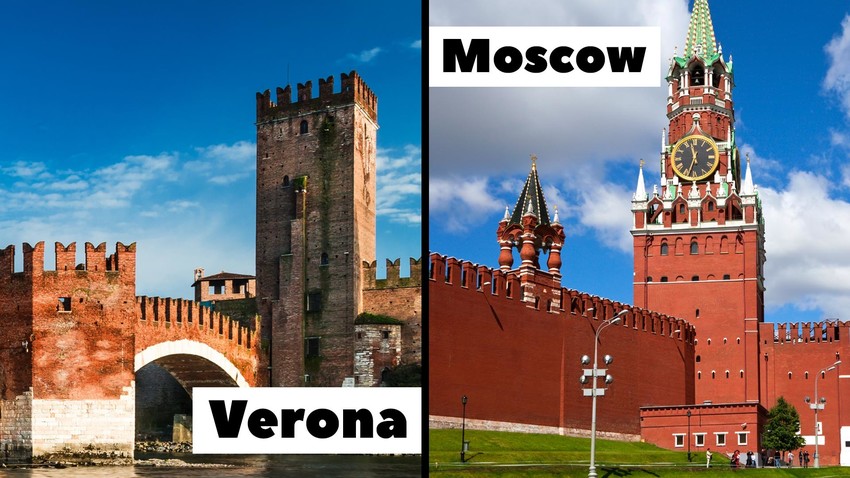 Castelvecchio in Verona (L) and the Moscow Kremlin (R)

Legion Media
Russians couldn’t even make proper bricks before they hired Italians to work for them. The Italian engineers were proficient in war and architecture, and for lavish salaries, helped build the greatness of the Moscow state.

The main weapon of Grand Prince Ivan III of Moscow was not his men or his tactics, but Italian cannons. In the historical stand-off against the Tatars, led by Ahmed, Khan of the Great Horde, at the Ugra river in 1480, Ivan’s army brought cannons made by Italian engineer Aristotle Fioravanti (c. 1415 – after 1485), massive bronze mortars that could literally tear the Tatar cavalry to shreds. Without engaging in a fully-fledged fight, Ahmed Khan’s army retreated into the steppes.

The highest salaries in Moscow 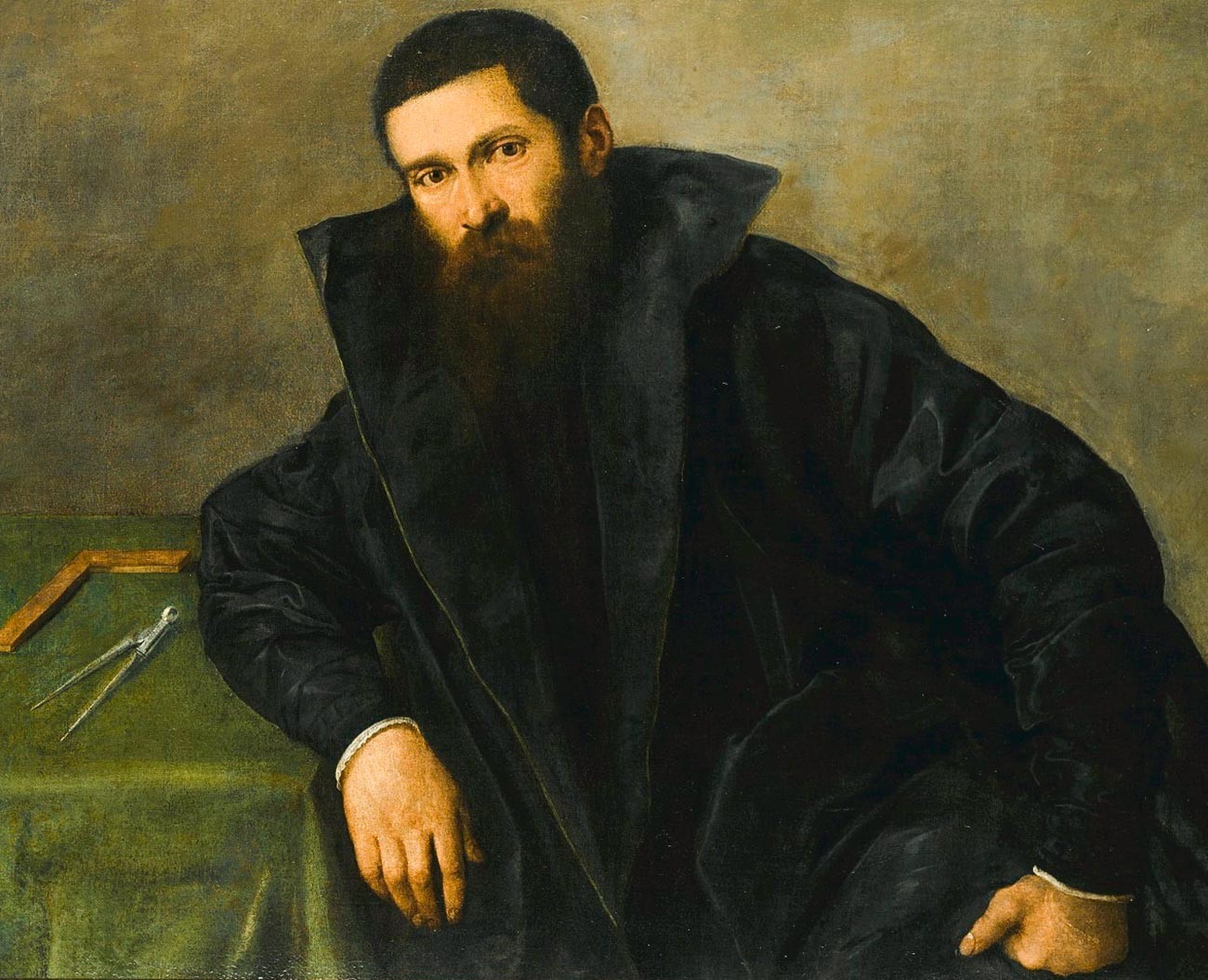 Rodolfo ‘Aristotle’ Fioravanti came to Russia in 1475, when he was already about 60. He specialized in restoring and moving bell-towers and castle towers, and constructing bridges. In 1474 in Europe, Aristotle was approached by Semyon Tolbuzin, envoy of the Grand Prince of Moscow and hired for 10 Moscow roubles a month – when in Russia, for just a ruble, a serf could buy his whole family, house, and land from his landlord.

Aristotle’s salary was probably the highest one in the Moscow State. Ivan needed him to rebuild the Dormition Cathedral, the main temple of the Moscow State, which had partially collapsed during an earthquake.

After coming to Moscow in 1475, Aristotle ordered the rest of the crumbled cathedral removed, designed a new brick stove, and a new brick mixture, and founded the first Italian-style brick mill in Moscow. His techniques allowed him to complete the 35-meter high, five-domed cathedral in just 2 years (the decoration took two years more). 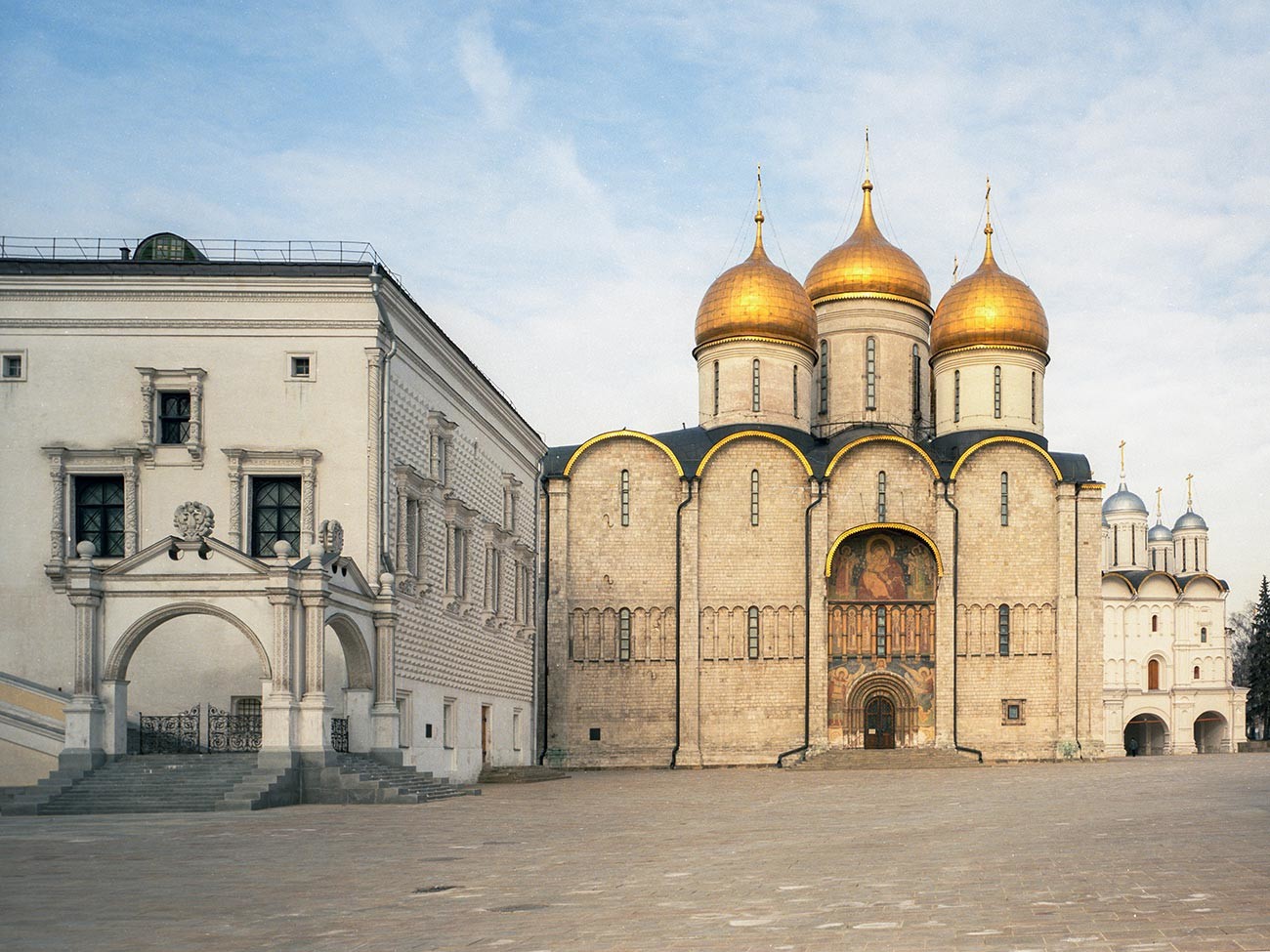 The Palace of Facets (L) and the Dormition Cathedral (R)

But Aristotle was not the only Italian architect in Moscow. Maybe even more important is Pietro Solari (c. 1445 – 1493?). He came to Moscow in 1490 from Milan and designed the Palace of Facets in the Moscow Kremlin, and six towers of the current Moscow Kremlin, including the clocktower – the Spasskaya tower, that became the Moscow Kremlin’s main symbol. Other Italians, most notably Antonio Gislardi and Marco Ruffo, also worked on constructing the Kremlin walls and towers. So if you noticed that the Kremlin walls remind you of the Italian architecture – it is Italian-designed indeed.

But this was not the only thing Italians did in Moscow in the 15th-16th centuries. In almost every European army of the period, Italian engineers were the best in weapon and explosive arms design, historian Mario Corti says in his book “Italian military men in  Russian service.” 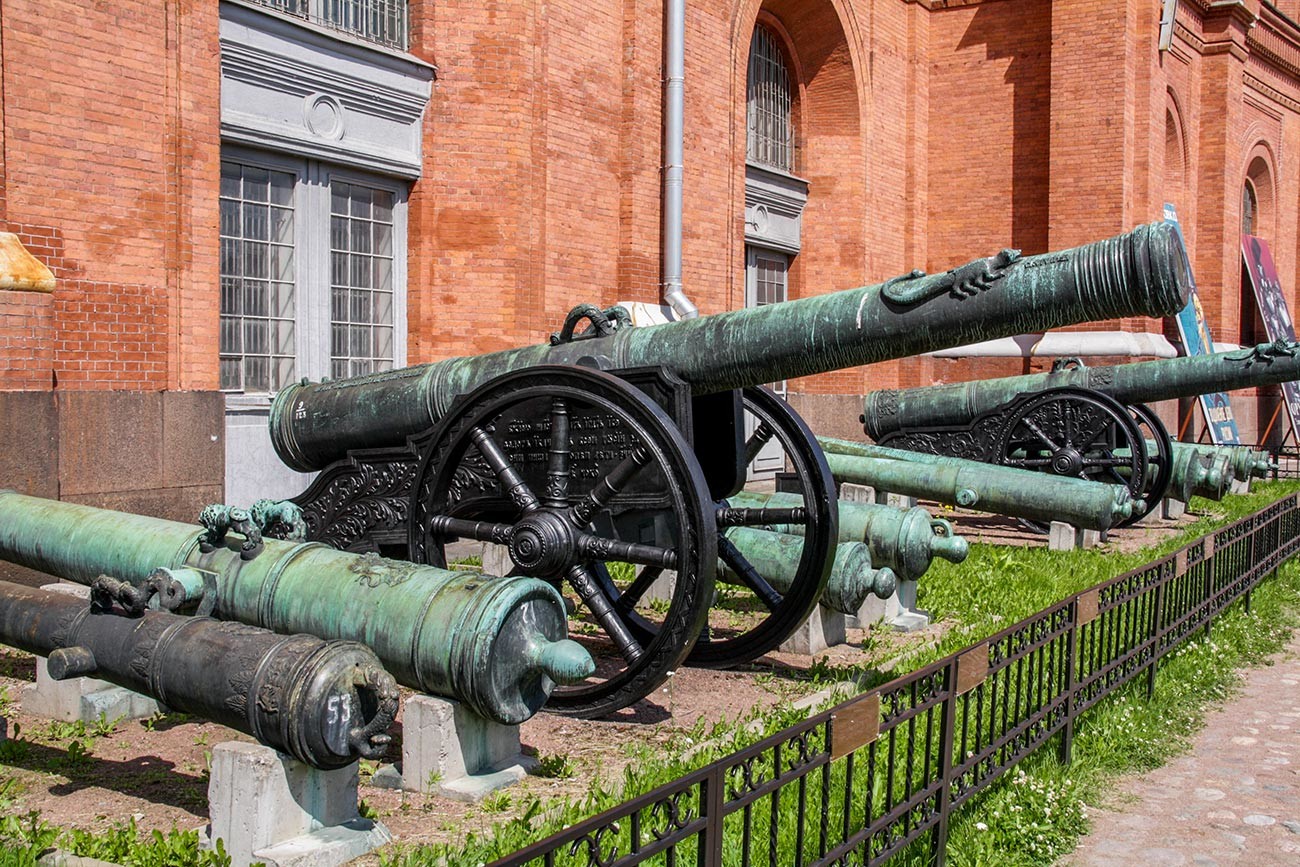 The 152-mm caliber cannon "Skoropeya" ('The Evil'), made in 1590 by Andrey Chokhov. Russians learned to make cannons like this one from the Italian gunsmiths

Simultaneously with the construction of the Dormition Cathedral, inside the walls of the Moscow Kremlin, Aristotle Fioravanti organized a gun factory, producing gunpowder and moulding guns. 16 falconets – light cannons – were its first production. Easy to handle and transport, fast to reload, they were deadly in the late 15th century.

Ivan took Aristotle to the war against the Novgorod Republic. In 1479, Fioravanti personally controlled an artillery unit that bombarded the city and forced its surrender: “The guns were firing ceaselessly because Aristotle was a master of his craft,” a Russian chronicle says. Fioravanti taught Russian troops to fire cannons at certain times of the battle, trained them to organize ceaseless fire, and handle different kinds of firearms, Mario Corti says. So in the battle of Ugra, Fioravanti was also in the main force. The last time he is mentioned was 1485 – he maybe lived in Russia for just ten years but left a great heritage behind. 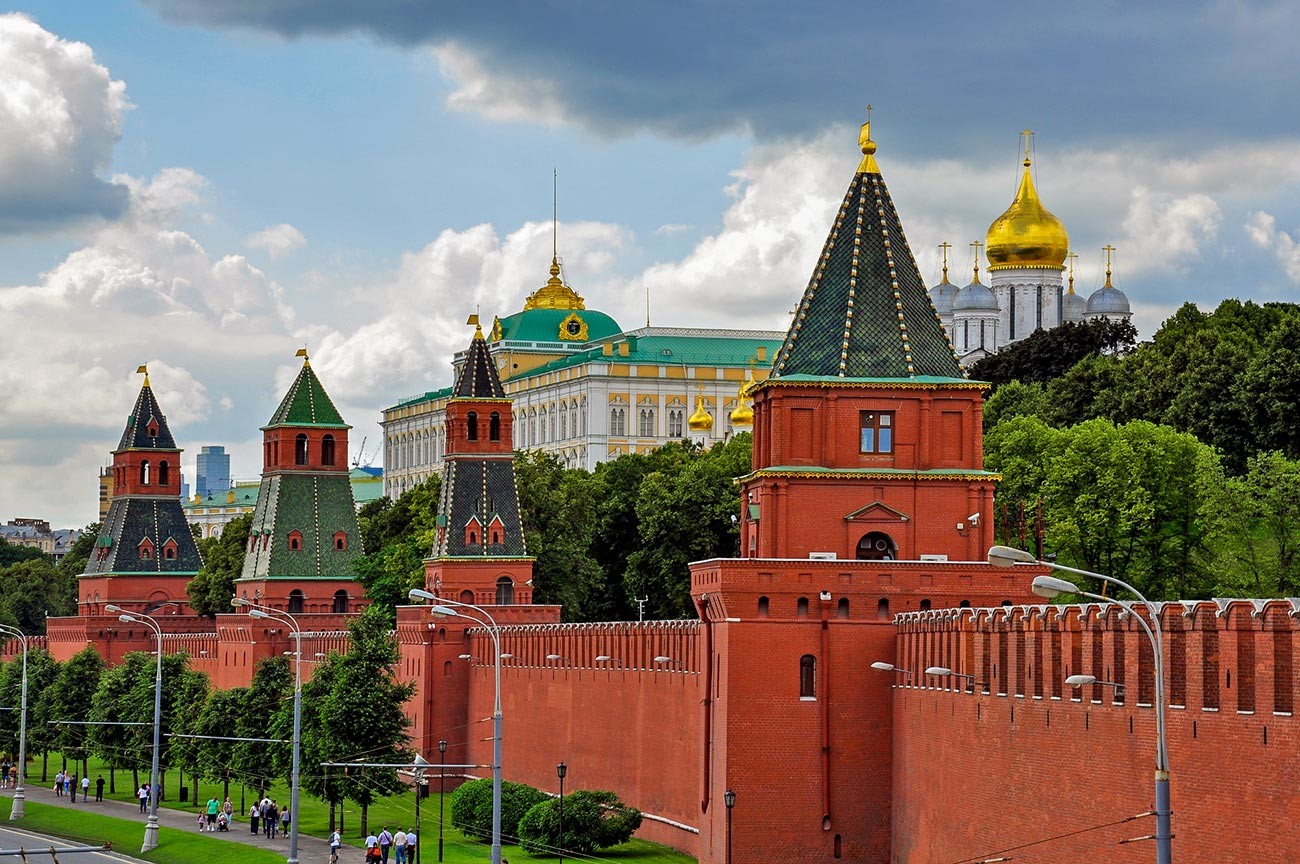 The Kremlin wall and towers

In 1488, apparently after Aristotle’s death, another Italian gunsmith named Paolo De Bossis created a “big cannon” (how a Russian chronicle puts it) that was called “Pavlin” (‘peacock’ in Russian, sounding just like Paolo’s name) – it  was still in use by 1563, when it was mentioned during Ivan the Terrible’s siege of Polotsk! Another Italian gunsmith named Jacobo came to Moscow in 1490 and created at least 15 small cannons. We can definitely say that in the late 15th – early 16th centuries Italians dominated Russian arms production. But they stayed for a long time and even helped Ivan the Terrible defeat the Kazan Khans.

Ivan III’s son, Grand Prince Vasily III of Moscow, also actively used the help of  Italian architects and gunsmiths; during his reign, the magnificent Ascension Church in Kolomenskoye was designed and built by Pietro Annibale, who also designed the Kitay-Gorod fortress wall in Moscow, surrounding the city’s centre quarters.

Ivan the Terrible, the first Moscow tsar, used Italian war engineers in his conquest of Kazan Khanate. The Kazan Chronicle, created in 1560-1565, the only source that tells the story of Ivan’s conquest of Kazan, famously mentions the Italian engineers.

1552 was the fourth time Ivan the Terrible tried to capture Kazan. This time, he brought Italians to help blow up the city walls. The chronicle says the tsar talked to the engineers personally, telling them that the Kazan Kremlin’s walls were very strong, but the Italians said they’d bring the walls down in a matter of days with an explosion. “This will be done,” the chronicle relates Italians saying, “only this, or starving the defenders to death could help capture this city.” 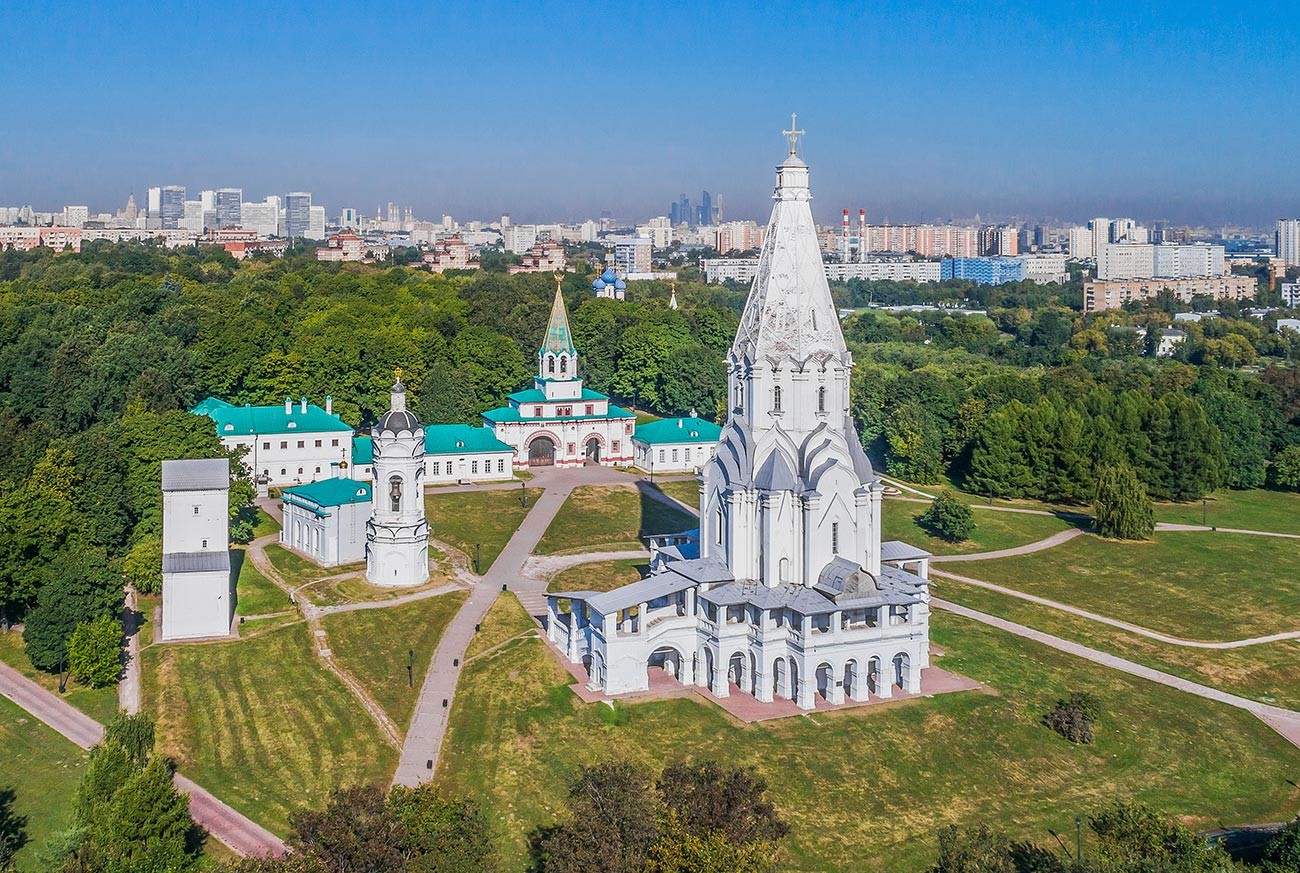 The Church of Ascension in Kolomenskoe, built circa 1530 by an Italian architect Pietro Annibale

The Italians first built four siege towers that were higher than the city walls and were used by archers to attack the Kazan Kremlin garrison. Then, they made several bridges over the Kremlin moat, and finally, properly organized tunnels leading to the walls’ foundation, and put explosives inside them. At a certain moment during the siege, the walls crumbled with explosions, and Ivan’s infantry, crossing the moat by bridges, invaded the city. Ivan had tried to take Kazan for almost 5 years, since 1547, and it was finally done with the Italians’ help.

After Ivan the Terrible’s epoch, Italians stopped coming to Moscow because an economic and military crisis meant the Russian tsars could not afford to pay the engineers the salaries they demanded. However, a century later Peter the Great would again hire Italian shipbuilders and gunmakers to build the new Russia. Meanwhile, the Dormition Cathedral, the Ascension church, and, most importantly, the Moscow Kremlin are intact to this day, and in constant use. And it’s been 500 years that Russians have known how to make proper bricks.