How and why Romanians fought against the Soviets in WWII (PHOTOS) 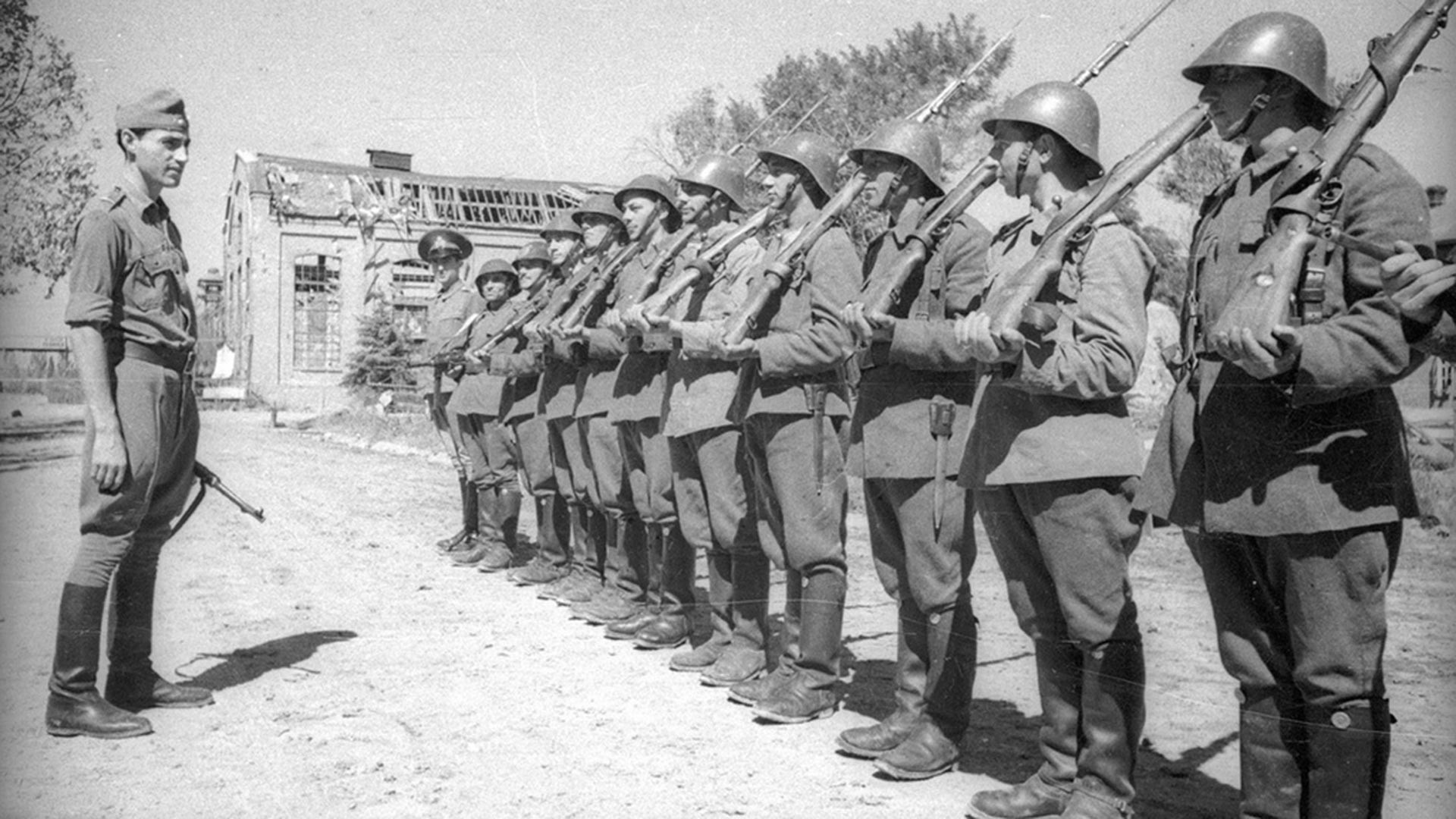 Evgeny Khaldey/МАММ/МDF/russiainphoto.ru
After lending support to the annexation of a vast portion of Romanian territories, Adolf Hitler promised to re-establish Great Romania with Soviet lands.

On June 22, 1941, at 03:15, Romania entered World War II by participating in a joint invasion of the Soviet Union with the forces of Nazi Germany. That participation would bring Romanians a number of bitter defeats and even greater losses, laying the groundwork for changing the country’s political system forever. But it would also result in substantial territorial gains. 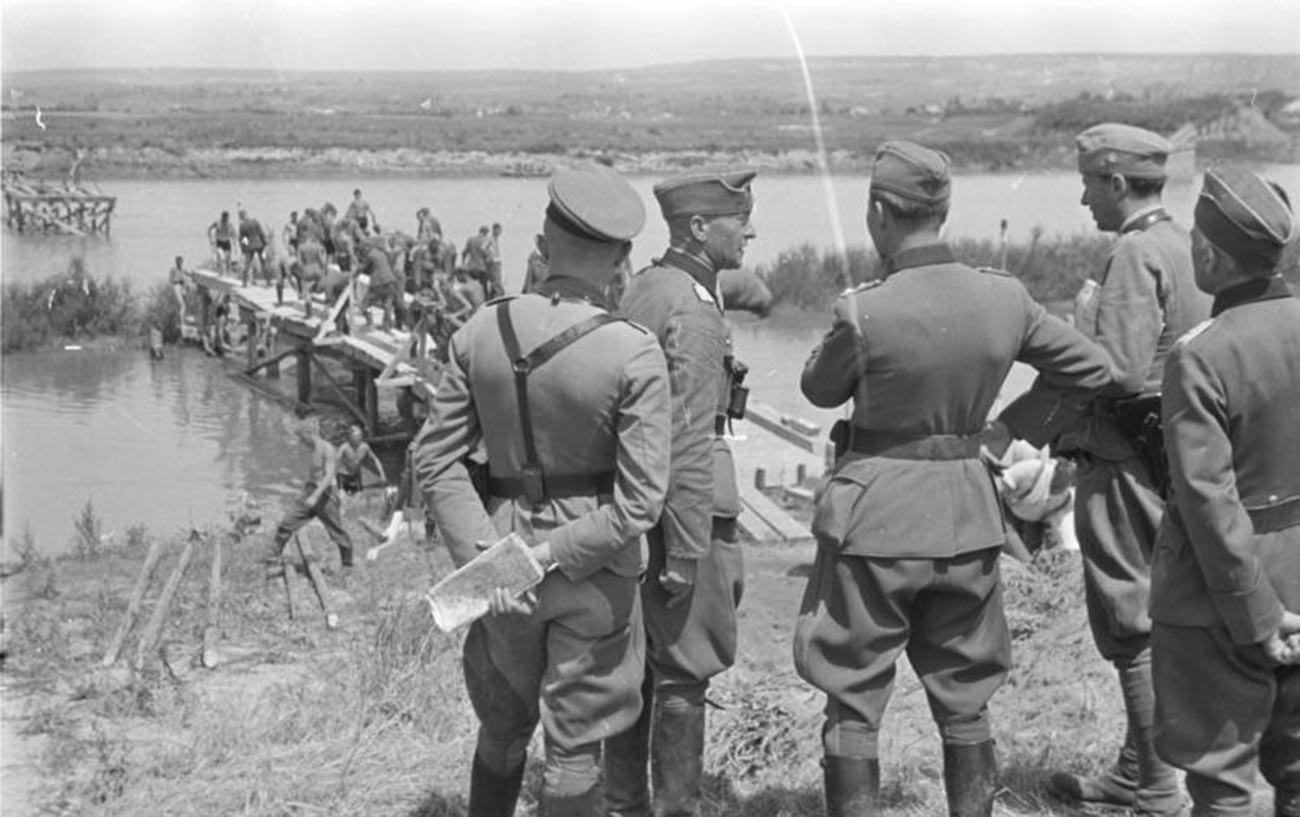 In the 1930s, Romania had played a massive role in the Third Reich’s strategy: it shared a huge stretch of border with the Soviet Union, which Nazi Germany was actively planning to invade; it also had access to the Black Sea and possessed oil fields that were key for the German economy. However, Germany wasn’t having any luck in persuading Romania to join in a military alliance with it: Bucharest was consistent in its anti-German policies, such as in its refusal to participate in dividing up Czechoslovakia, as well as taking a neutral, pro-French stance at the start of the war. 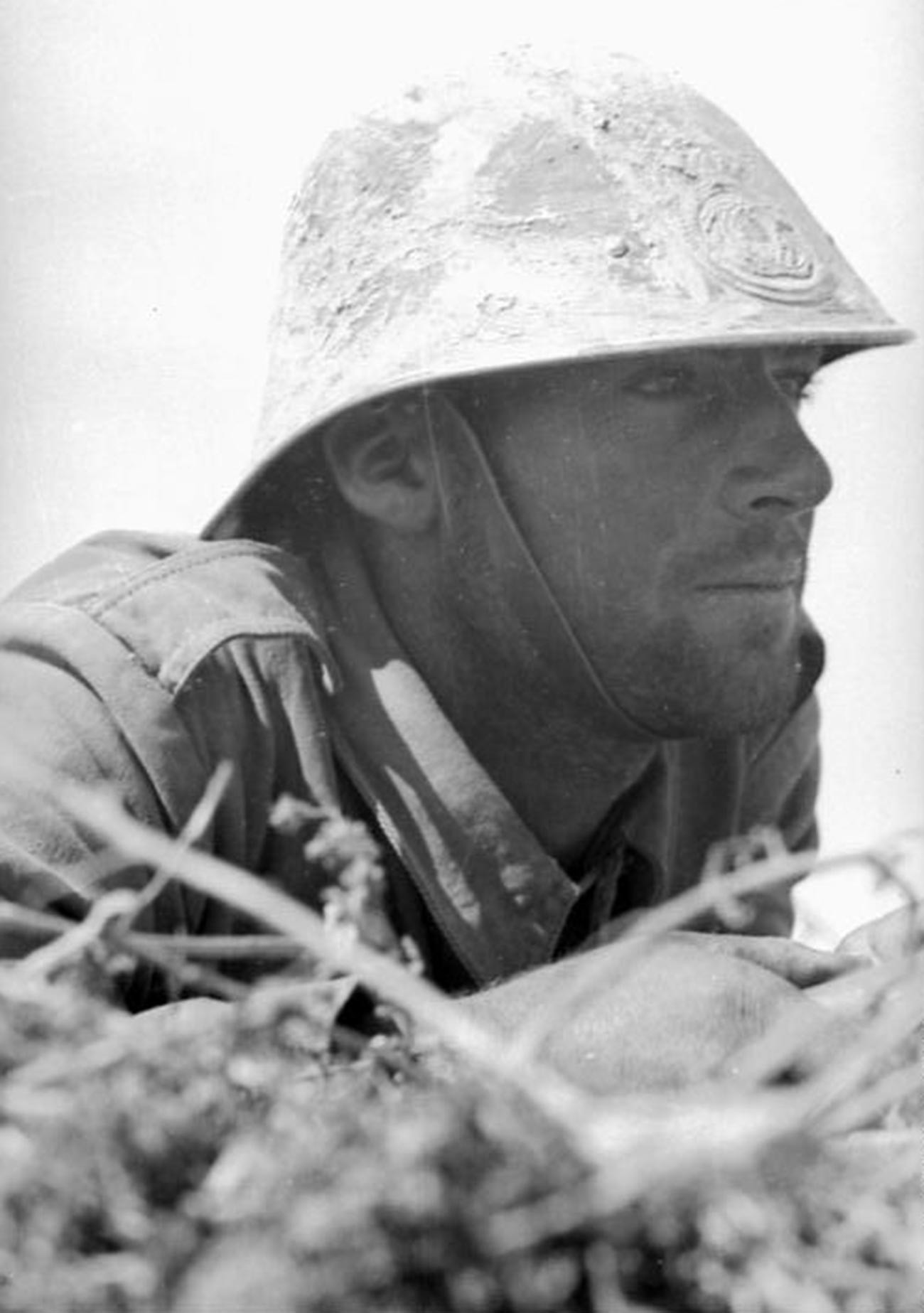 The Romanians, who in the 1910s significantly expanded the borders of their state at the expense of weakened neighbors, were quite happy with the status quo.However, the USSR, Hungary and Bulgaria, which had strengthened by the 1930s, had too many territorial claims to 'Greater Romania' to leave everything as it was. The Germans took advantage of these contradictions, seeking to break Bucharest and drag it into their sphere of influence. 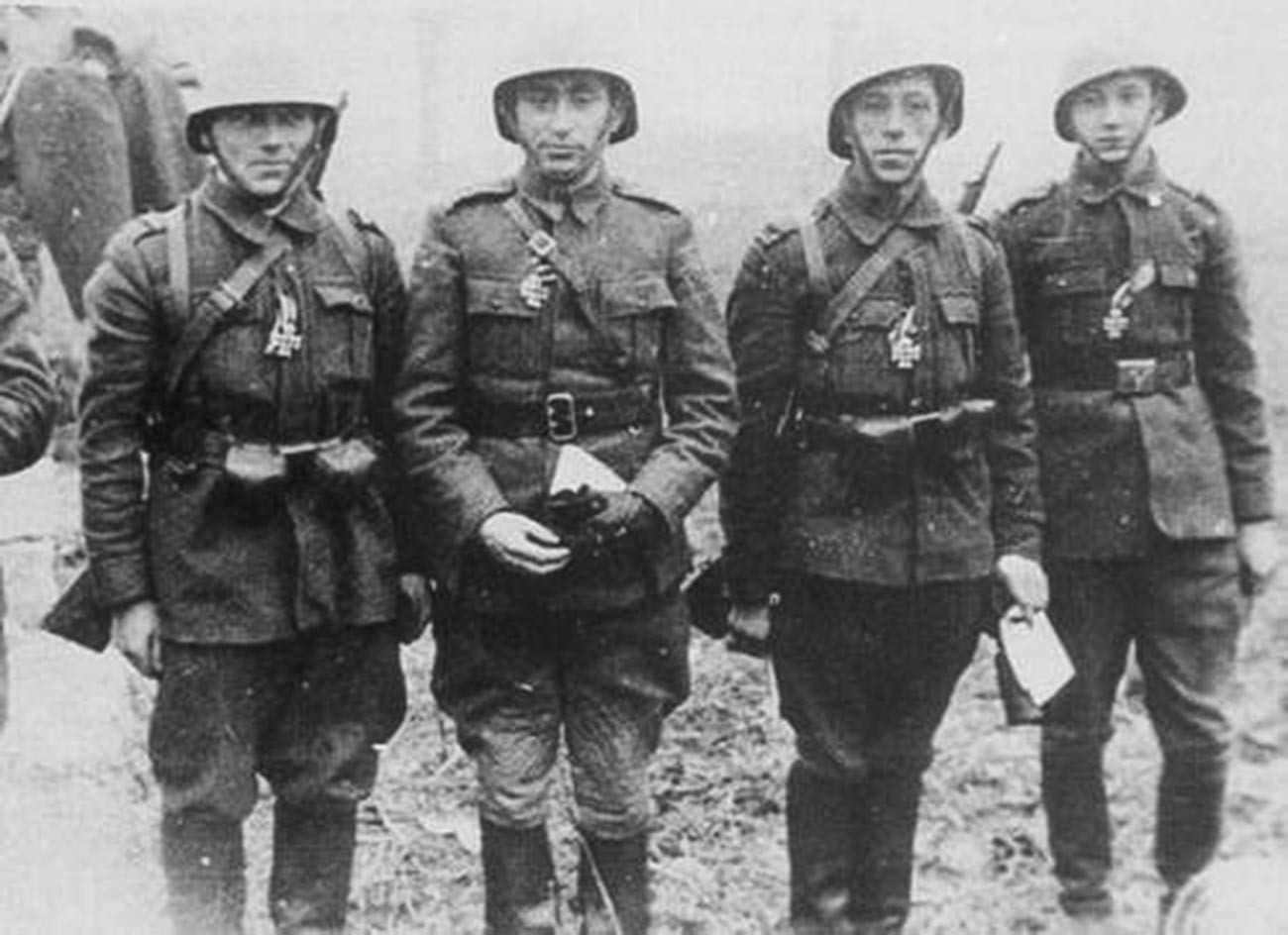 Soldiers of the 8th Cavalry Brigade after receiving the Iron Cross. Crimea, 7 January 1942.

Nearly half of the territories belonging to Romania were, effectively, time bombs. Despite the active 1913 ‘romanization’ of the Bulgarian territory of Southern Dobruja in the aftermath of the Second Balkan War, Bulgarians continued to inhabit it. A sizable portion of Hungarians (about 30 percent) continued to live in Transylvania, annexed from them at the end of World War I. And Moscow wasn’t about to let the loss of Bessarabia slide - the territory had been with the Russians since 1812, with the Romanians later seizing upon the chaos of the Russian Civil War in 1918 in order to take it. 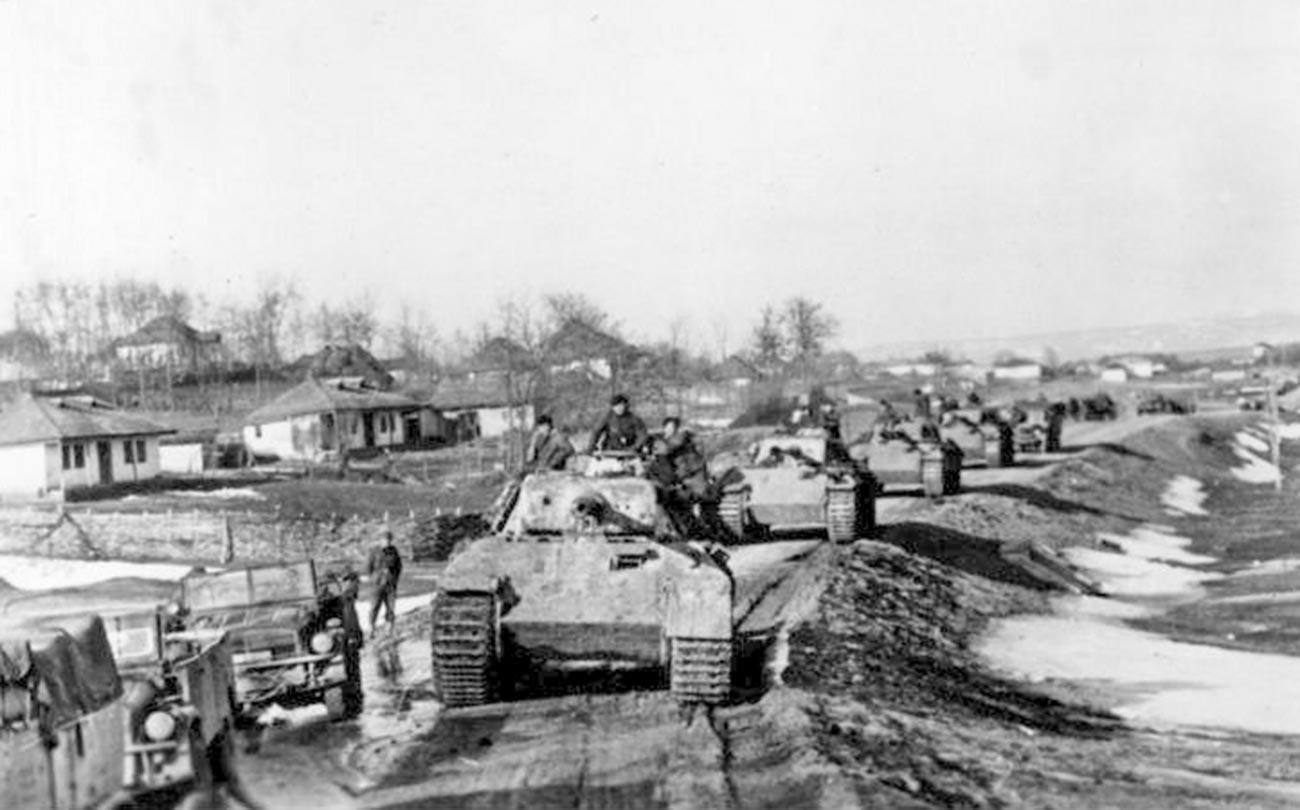 In the end, having received the promise of German support, Romania’s neighbors lodged territorial claims against it in 1940, which Romania was forced to accept. According to Soviet-German agreements, Germany would not interfere when, in June 1940, the Soviet Union took back Bessarabia. In August, as part of the Second Vienna Award, Berlin and Rome pressured Bucharest openly, forcing it to surrender Northern Transylvania (the southern part stayed under Romanian rule). And with support from Germany and the USSR, Bulgaria got back Southern Dobruja in September. 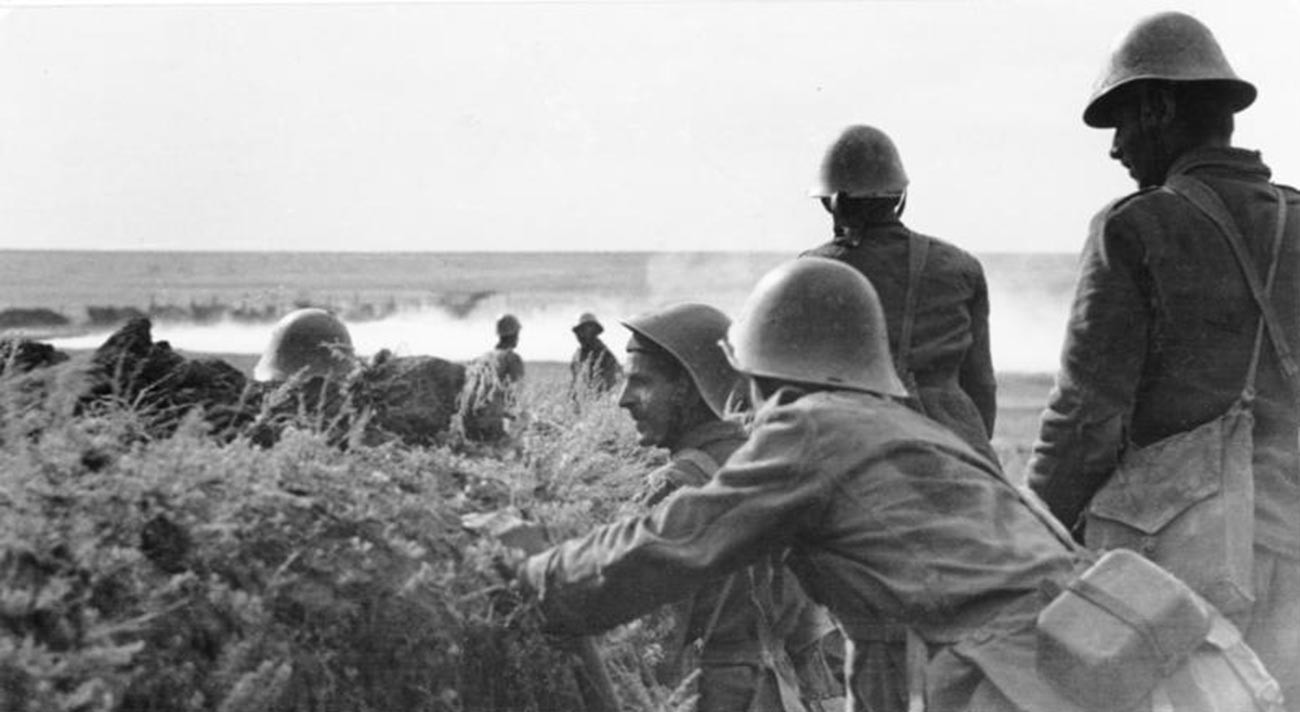 Having lost 38 percent of its territory, Greater Romania was no longer so “great”. The loss of Transylvania turned out to be an especially severe blow - the Hungarian territory was situated right in the heart of the country. Romanian-Hungarian clashes had begun, followed by a mass exodus of Romanians into their historic homeland. 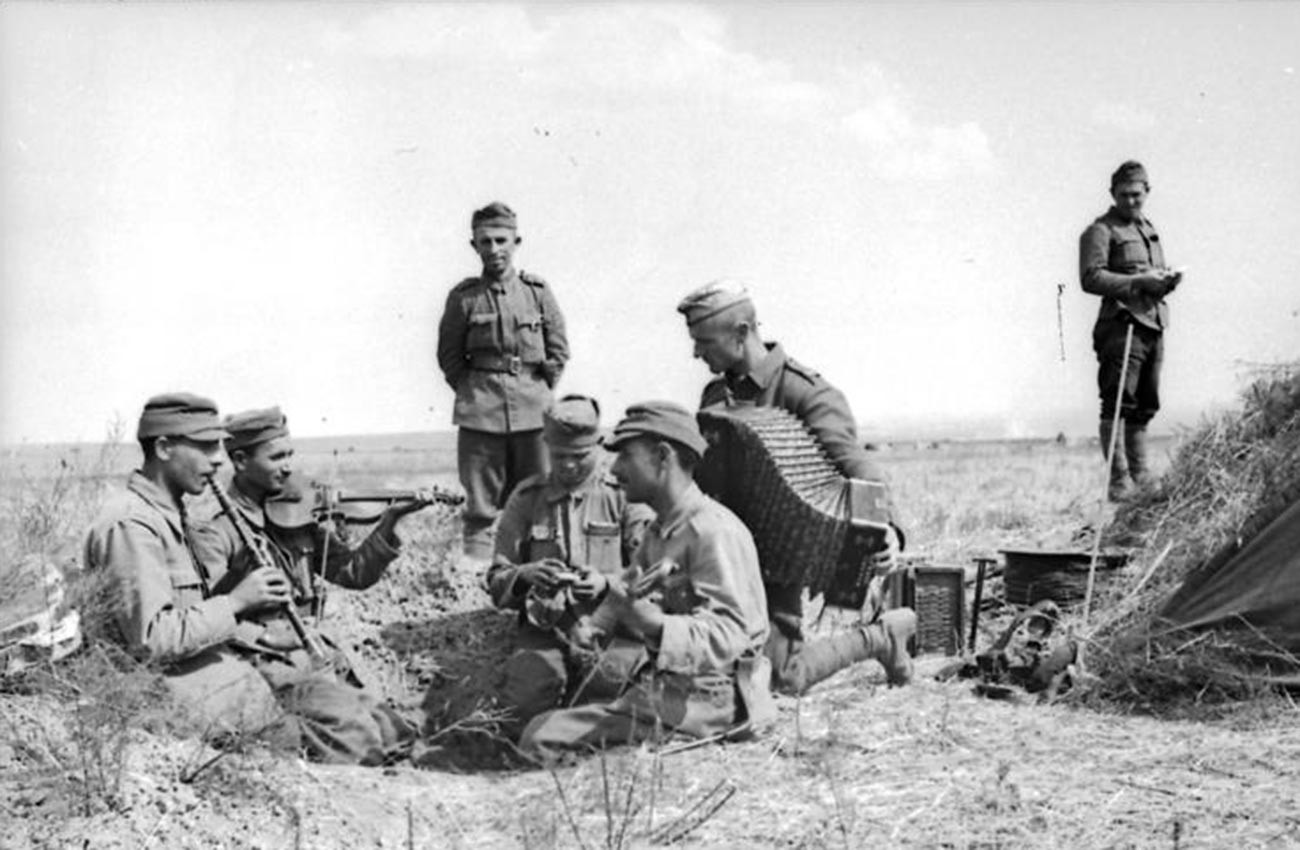 Using Romania’s weakened and shocked state to its advantage, Germany offered its cooperation in the planned future division of the Soviet Union, which included not only the prospect of reclaiming Bessarabia and Northern Bukovina, but even the territories in Soviet Ukraine, all the way to the Dnieper River. Deciding to reconcile with Germany, the Romanians had also hoped to revisit the issue of Northern Transylvania. When, on November 20, 1940, Hungary - followed three days later by Romania - joined the Tripartite Pact (Germany, Italy and Japan), a paradoxical situation had emerged: two sworn enemies had become allies, both acting in the interests of the Third Reich. 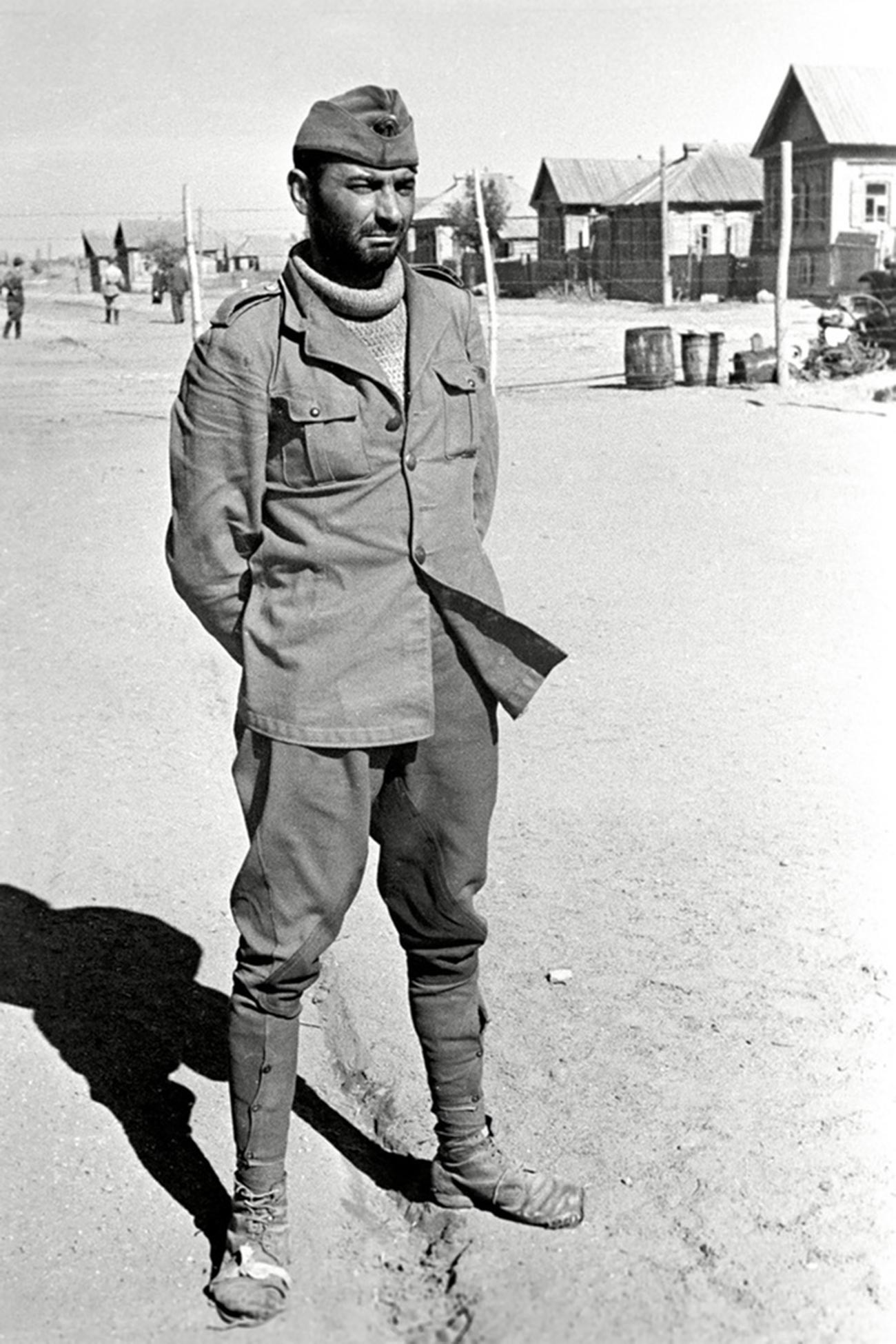 In the course of the 1941 campaign, the Romanian Army was too weak to go to war against the USSR alone: it had neither the armored units, nor the modern artillery, with the bulk of its forces consisting of manpower. The soldiers also lacked in the way of adequate training. This led to the 11th and 14th German armies supporting the Romanian attack, putting the total number of soldiers at 600,000. 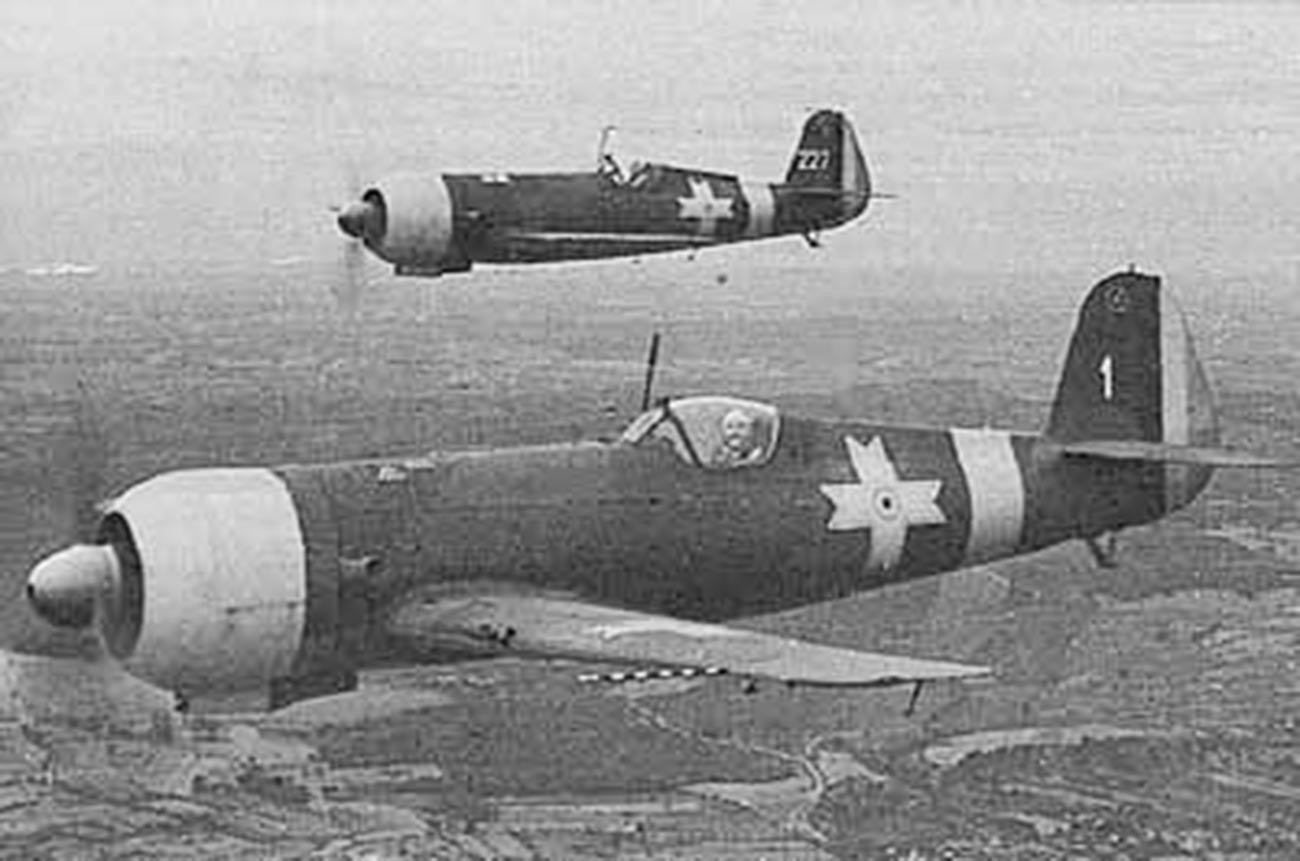 June 16, 1941, saw the fall of Chisinau, the capital of Moldovan SSR. And on July 23, Bender was also taken. All of Bessarabia and Northern Bukovina ended up in the hands of the Romanians, once again becoming part of the kingdom. With Romanian and German armies progressing further east, parts of Ukraine were now also under Romanian control, courtesy of Germany. The so-called Transnistria Governorate was set up, with Ukraine’s Odessa as the capital. 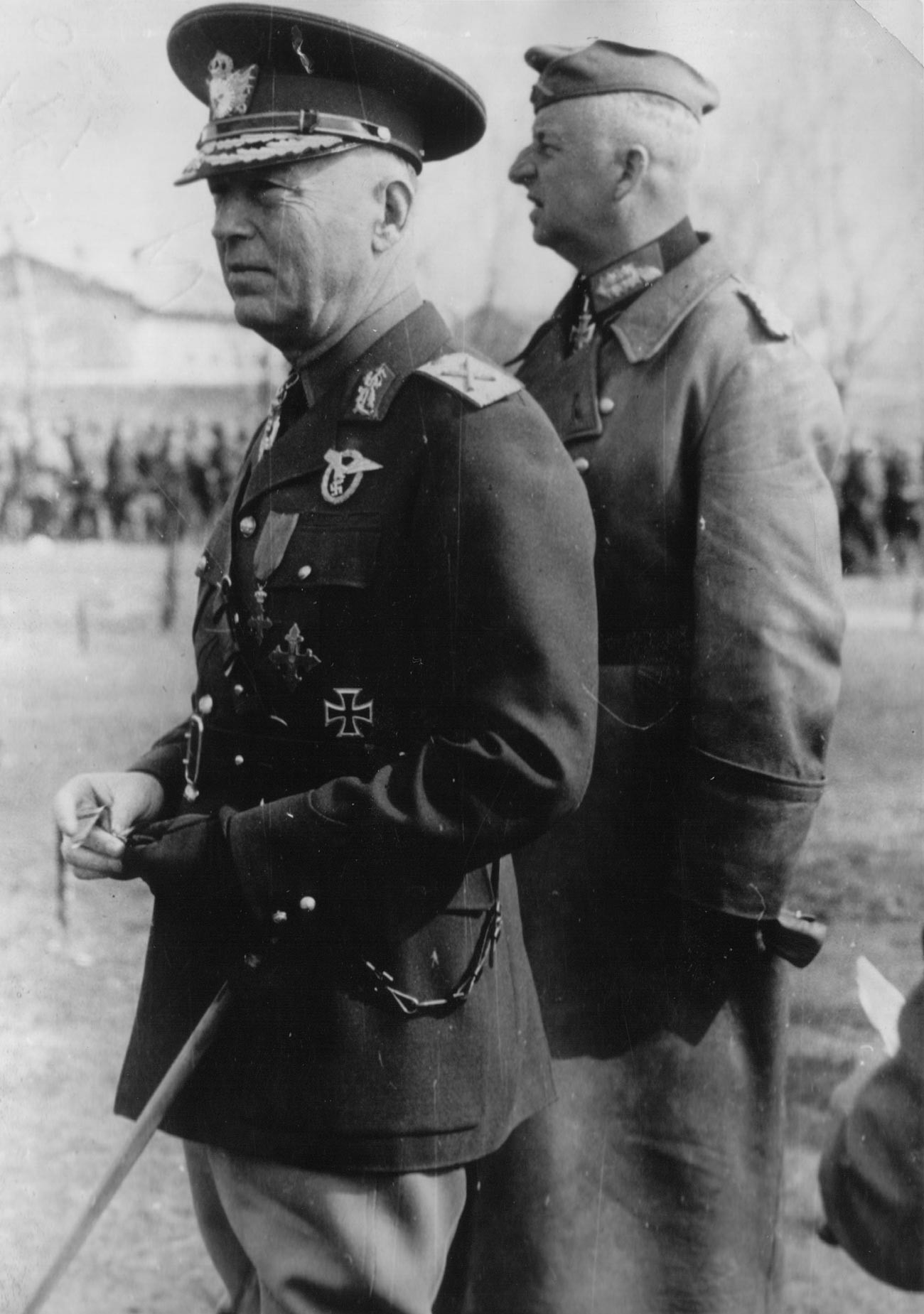 With Romanian Conducator Ion Antonescu, whom Adolf Hitler had great respect for, Romania took an active role in the holocaust, resulting in the loss of some 300,000-400,000 Jewish lives. “Myself and some guys were herding cattle near a forest, which we referred to as ‘Brizhaty’, remembered Mikhail Tsurkan, a native of Odessa Region. “We saw some kind of gathering of people there, approached it, and saw a group of Jews. There were more than a hundred, they must have been digging a trench… Having seen us, the Romanians called some guys over - older ones - and suggested: ‘Who’d like to shoot a minigun?’ Then they laughed… We ran from there in horror. And having witnessed the execution, we wept…” In February of 1942, the Romanians ceased their mass executions of Jews. However, until the moment of their exit from the Axis, they had continued to hunt them down, sending them to ghettos and concentration camps. 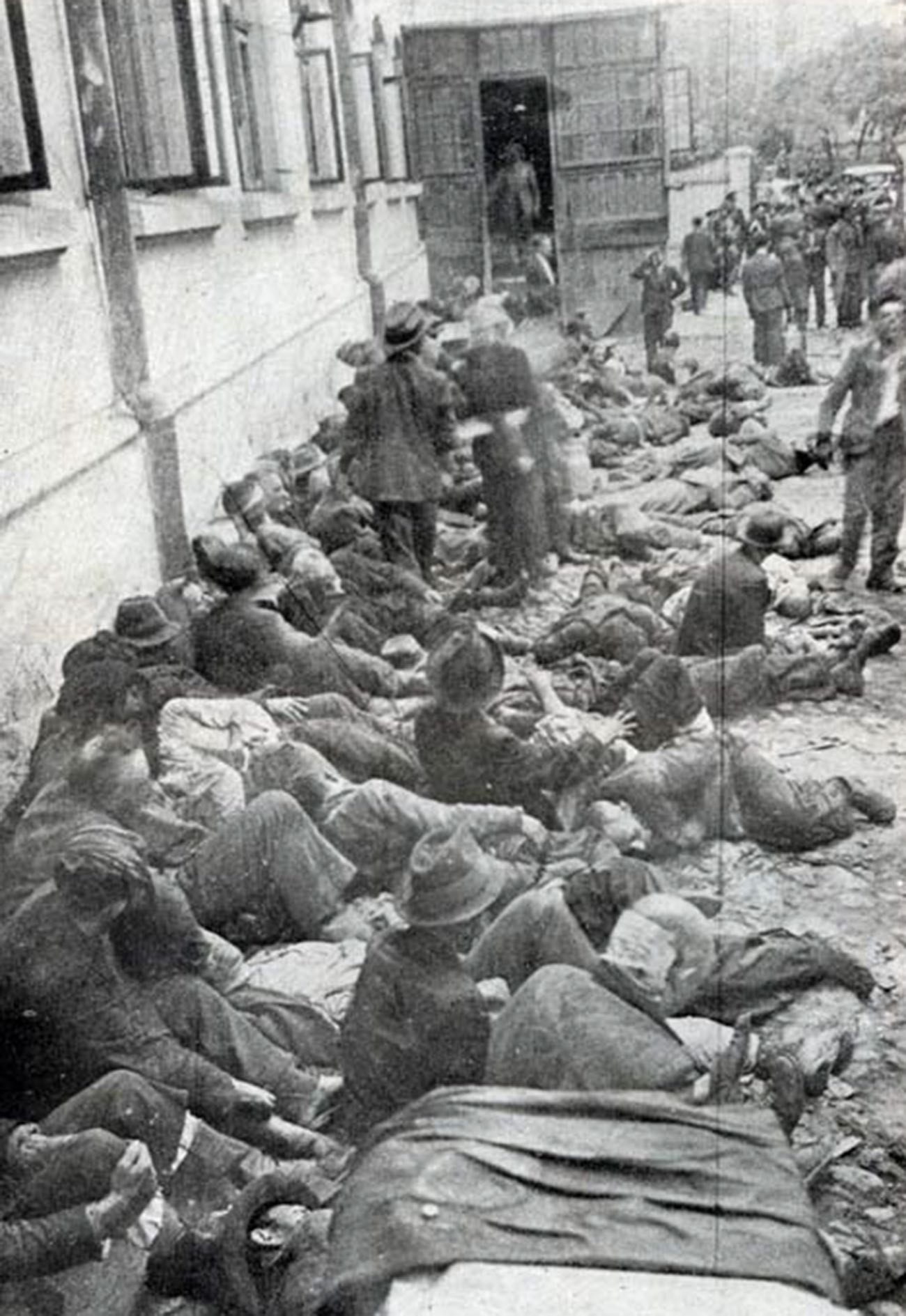 Together with the Wehrmacht, Romanian forces progressed to the shores of the Volga River and the Caucasus Mountains. German military commanders had had very little respect for their comrades’ fighting abilities. “The management of their forces, having been influenced by the French model since 1918, was still at World War I levels,” Fieldmarshal Erich von Manstein wrote of the Romanian armed forces. And it was they who bore the brunt of the Soviet strike during ‘Operation Uranus’, which sought to surround the 6th German Army in Stalingrad. As a result of the decisive World War II battle, the 3d and 4th Romanian armies were completely crushed, leading to the deaths of more than 158,000 Romanian soldiers. 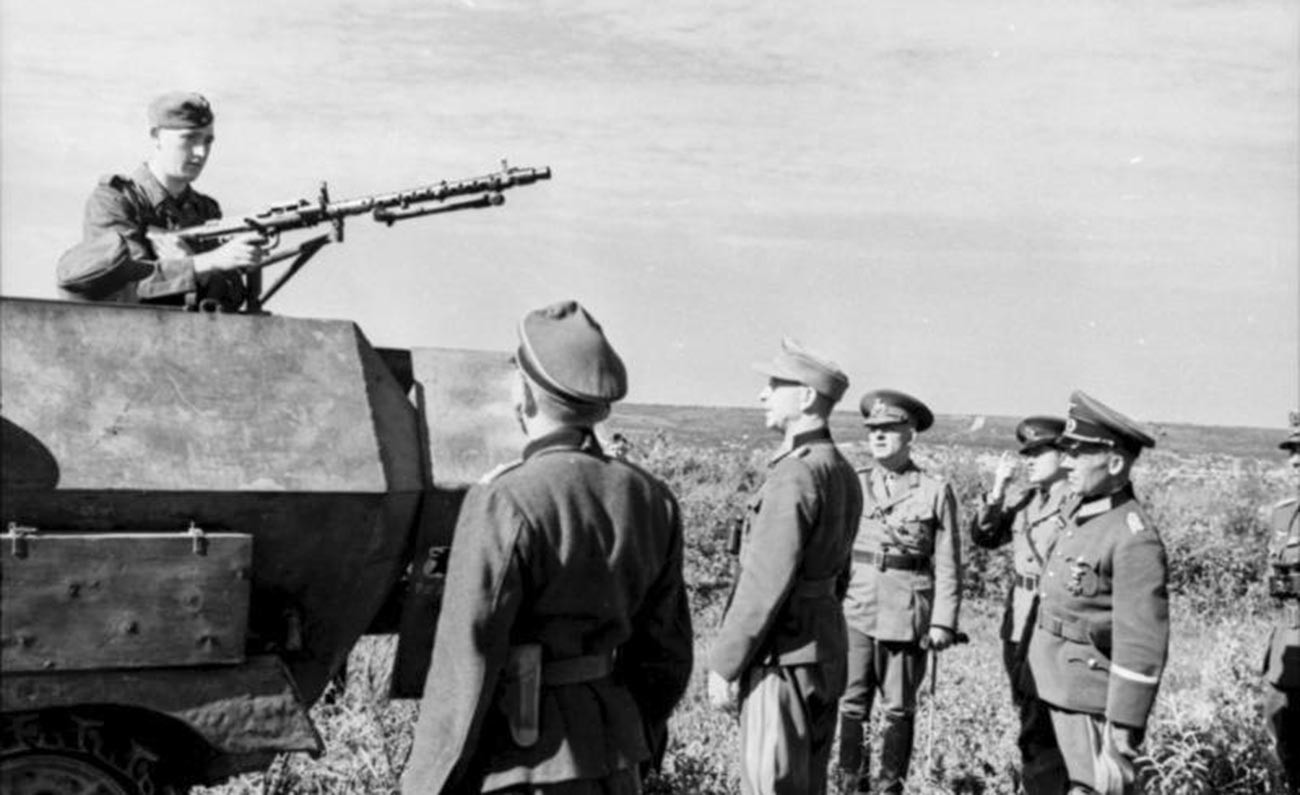 In the course of the Wehrmacht withdrawal, Romanian forces were pushed back to their own national borders and the country was beginning to be overrun with anti-German, pacifist sentiments. On August 23, 1944, with the battle against the Red Army taking place in Moldova and in the north-east of Romania, Antonescu was deposed as part of a conspiracy, organized by Mihai I. The monarch immediately announced an end to hostilities against the USSR and Western allies and, on August 31, Bucharest welcomed the Red Army with open arms. Romania had joined the anti-Hitler coalition, with its armies later taking part in the liberation of Budapest and Prague. 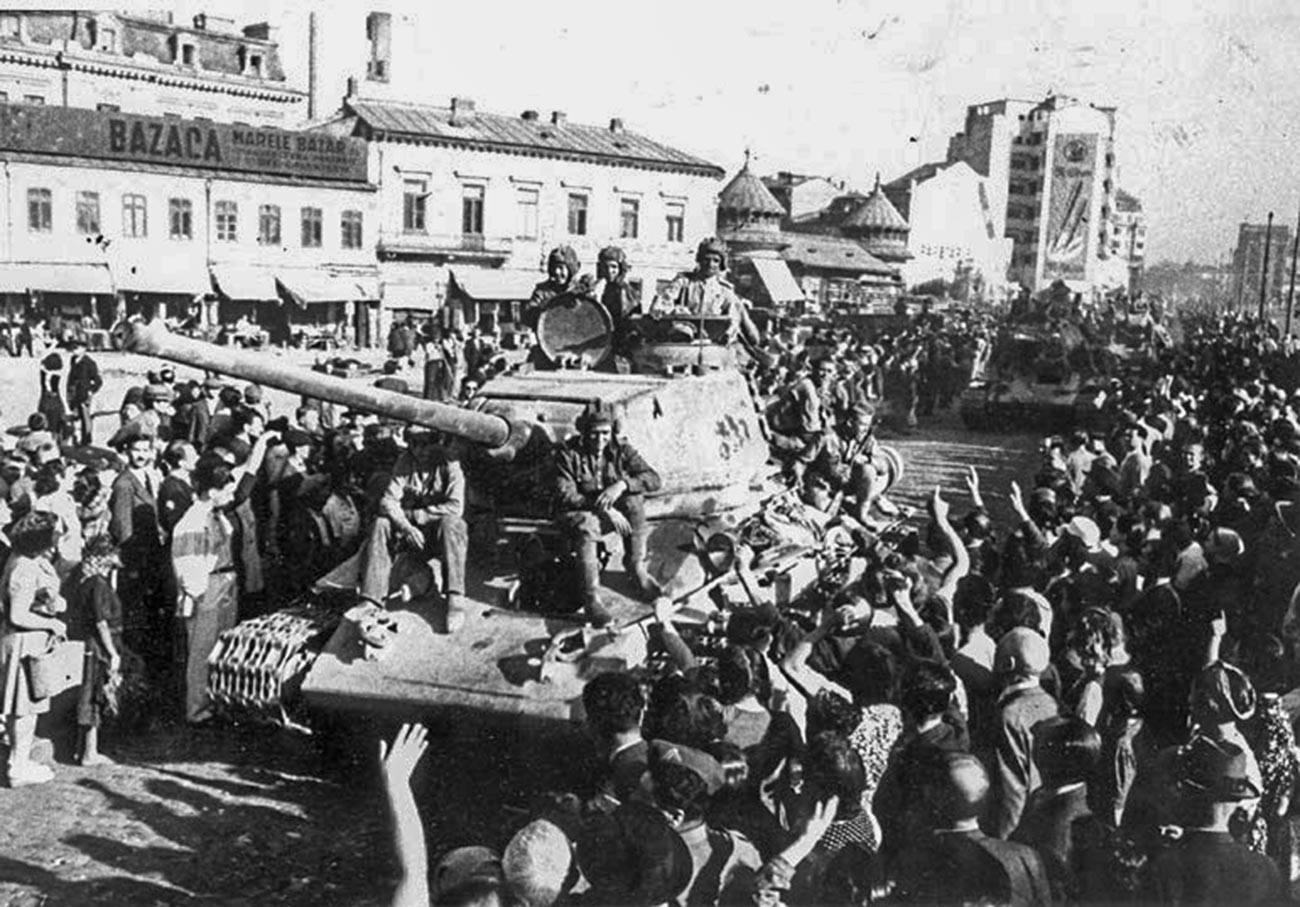 The Red Army is greeted in Bucharest, August 1944.

The war against the Soviet Union resulted in the loss of 475,000 Romanian lives. With Moscow’s participation, the Second Vienna Award was annulled and Transylvania was returned to Romania. Ion Antonescu was executed by firing squad as a war criminal on May 17, 1946. It’s fascinating that, even after entering the Soviet sphere of influence, the country had continued to be a monarchy. Mihai I, ‘The Komsomol King’ - as he was nicknamed in Moscow, was even awarded the ‘Victory’ order of the USSR. It was only on December 30, 1947, that the country’s communist government forced him to abdicate the throne, dissolving the monarchy and establishing the Socialist Republic of Romania. 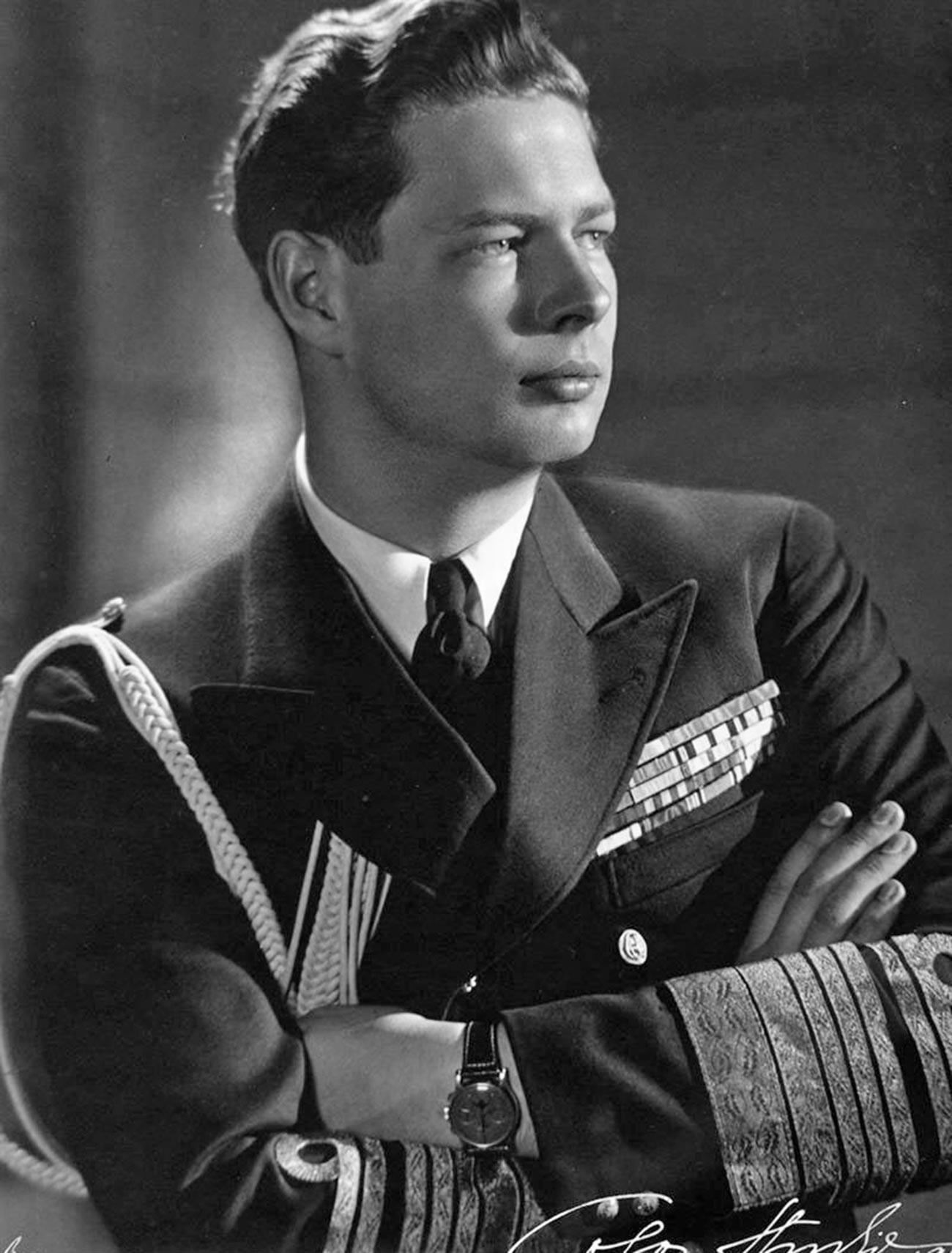