How Swedes fought for and against the USSR in WWII 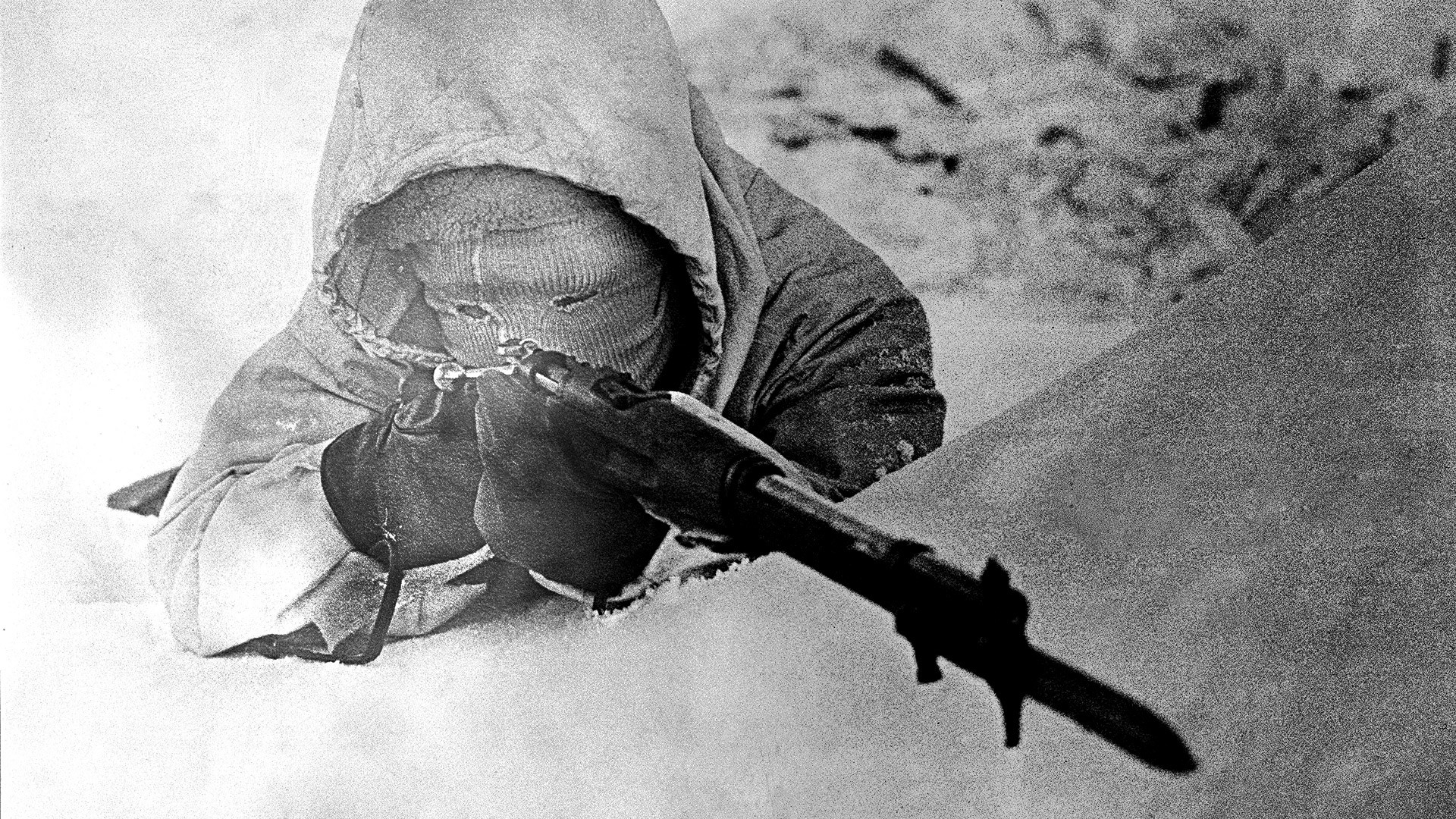 AP
Despite the fact that the Soviet Union never threatened neutral Sweden, thousands of Swedes headed eastwards to take on the Red Army.

In the course of the Second World War, Sweden - which had never had to get involved in any conflict in the 125 years running up to this point - was forced to surrender some of its foreign policy principles, at least in part.

On the one hand, Sweden’s ending of their politics of neutrality was a result of Third Reich pressure. On the other, it was a voluntary move in the face of Soviet actions.

‘Finland’s business is our business’

Stockholm fiercely disapproved of the Soviet attack on Finland on November 30, 1939. The Swedes feared that, were their next-door neighbor to fall and be occupied, their country would be next. Thus, instead of its traditional declaration of neutrality, Sweden instead proclaimed itself a ‘non-warring’ state, which entailed the following: the country would not take part in the Winter War, but reserved the right to assist Finland in any capacity it deemed necessary. 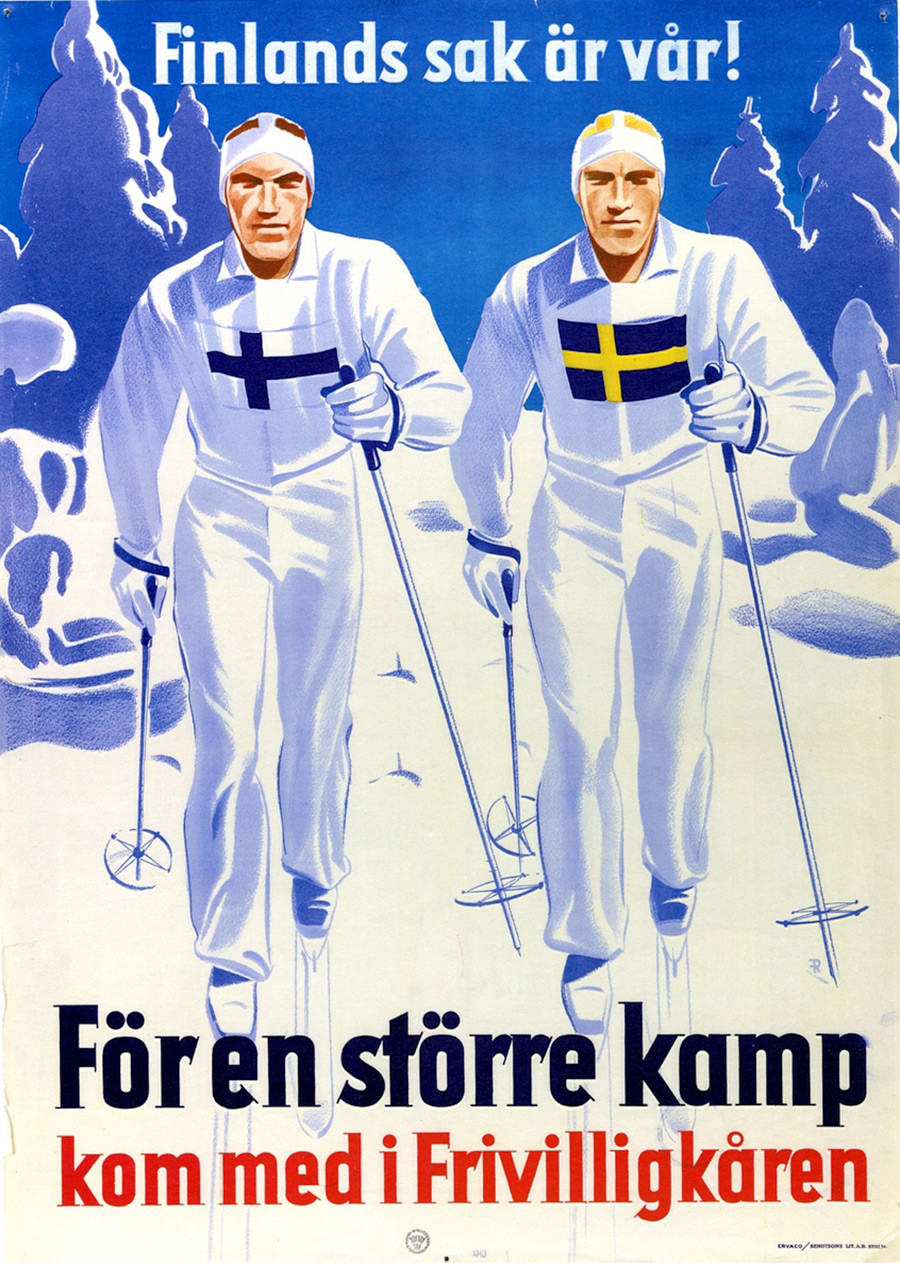 Swedish propaganda poster. "Finland’s business is our business! For a greater struggle - Join the Volunteer Corps"

Swedish caravans descended on Finland, carrying supplies to mount a strong defense. Among other things, the country received 800 naval mines, around 350 field, anti-tank and anti-aircraft guns, 135,000 firearms and more than 20 planes. Swedish society at the time was so set on coercing its government to aid Finland that no one considered what Moscow’s reaction might be.

On top of that, Swedish volunteers had mobilized to fight the Red Army, which, in this case, was perfectly legal: the country’s political neutrality could not prohibit its citizens from exercising their free will in joining foreign armies.

“Pure idealism, fraternal feelings, careerism and adventurism, and possibly even a desire for a noble end to a hopeless life,” Sven Rabe, one of the volunteers, was cited as saying by Lars Gyllenhaal in Svenskar i Krig 1914-1945 (“Swedes in the War”), as he recounted the reasons that many volunteered their services in a war with the Russians. 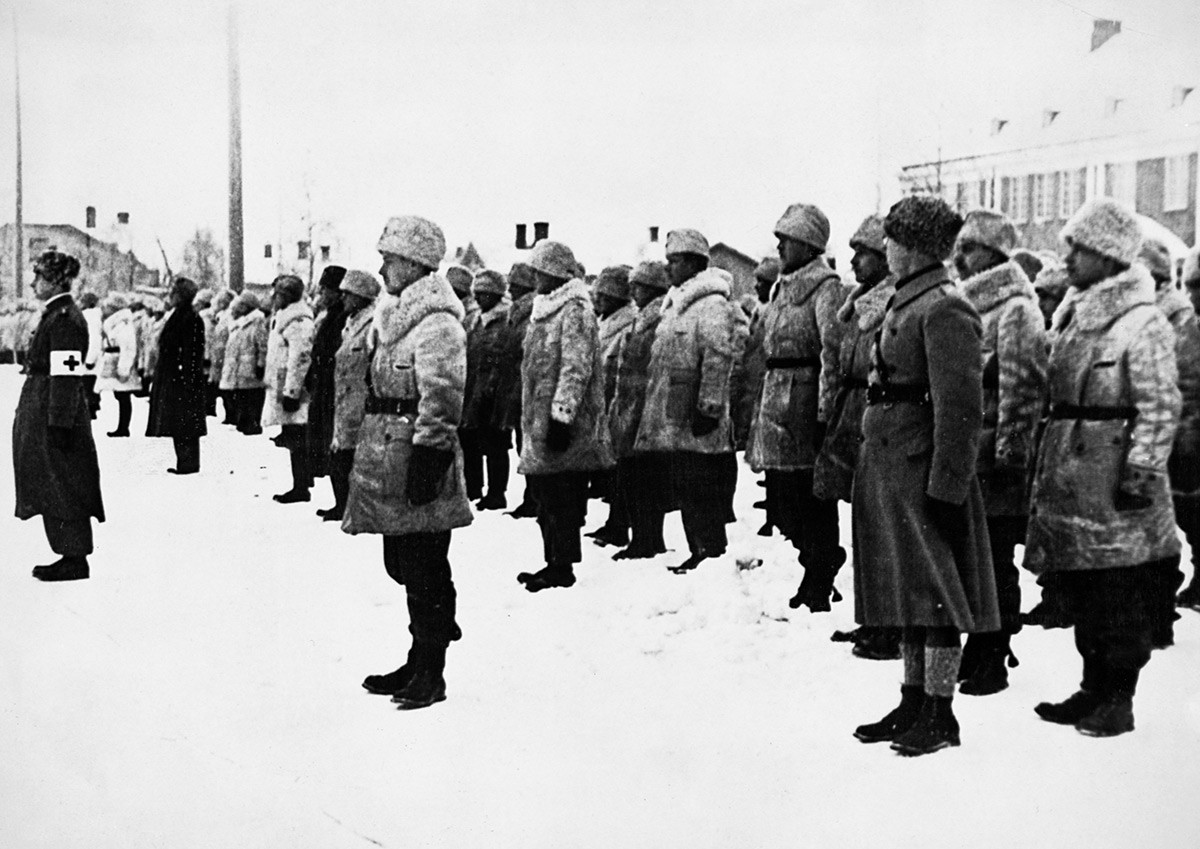 The Finns didn’t throw the Swedes into the epicenter of the fighting on the Karelian strait. The corps set out to fight in Lapland, a calmer stretch of the front, in Lapland. In all of its irregular encounters with the Soviet enemy, it lost 33 soldiers. Meanwhile, the volunteer corps’ air force reported 12  kills, having lost two planes.

The Swedish side did not put up serious resistance in the fighting, but according to Finnish historian Erik Appel’s Finland i Krig (“Finland in the War”), it is thanks to its efforts that the Finnish population had felt a very welcome sense of moral support.

When Finland joined Hitler’s expedition to the east in 1941, Sweden was of two minds. For them, it was no longer about the fight for survival and independence, so there were far fewer willing to fight the Soviets that time around than during the Winter War. 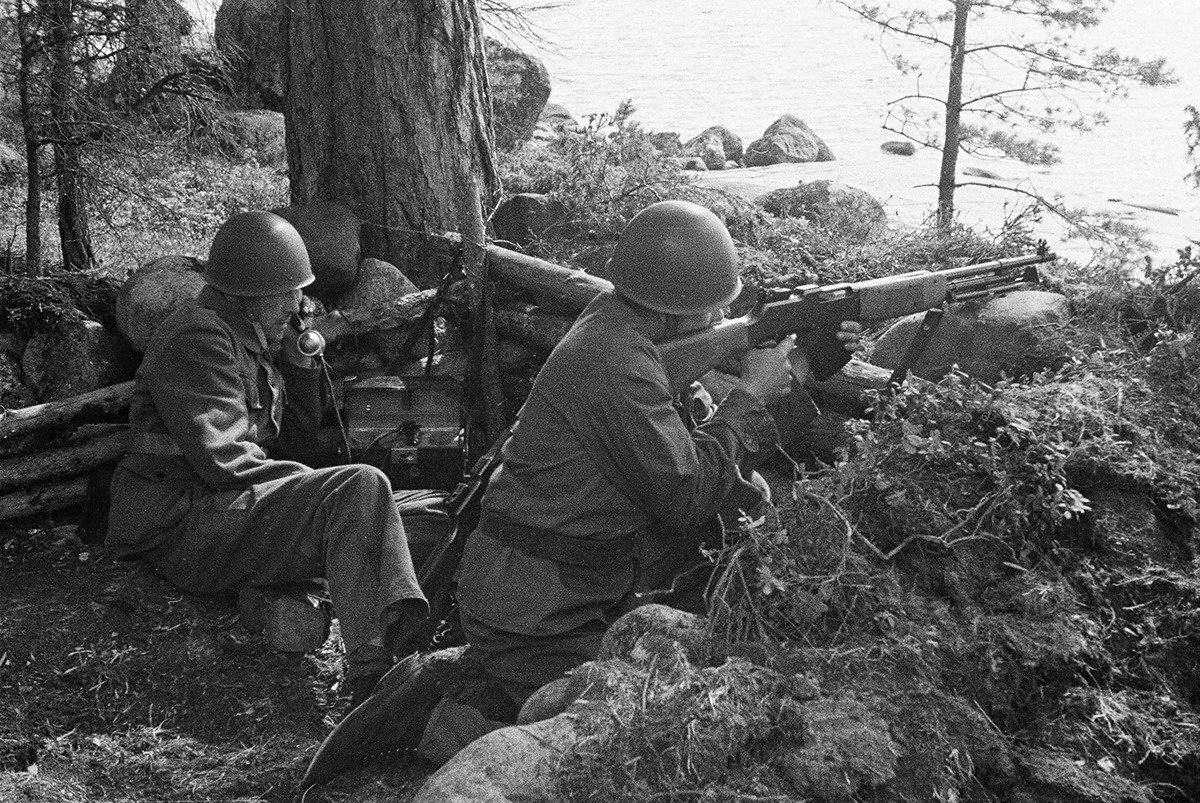 Troops from the Swedish Volunteer Battalion at Hanko sector in southern Finland in July, 1941.

The new Hanko Battalion was formed, named after the archipelago where the units were sent to mount an offensive on a Soviet naval base. The number of Winter War veterans wanting to join is noteworthy. According to them, they showed up “to finish the job”. After Soviet forces evacuated Hanko in December 1941, the volunteer battalion was disbanded.

The next Swedish military unit to join Finnish ranks was the Svir company, named so after the river near Ladoga. Stationed within the 13th regiment of the Finnish infantry in February 1942, the volunteer corps went much further than its predecessor, fighting until Finland’s exit in September of 1944.

A far more modest number of Swedes also joined up with German forces. About 200-315 men enlisted in the SS soon after the start of operation ‘Barbarossa’.

The Swedish media frankly referred to these people as Nazis, and, in most of their beliefs, they were. Fear of the “red menace” drove them to the Eastern front “to fight against bolshevism and judaism”. 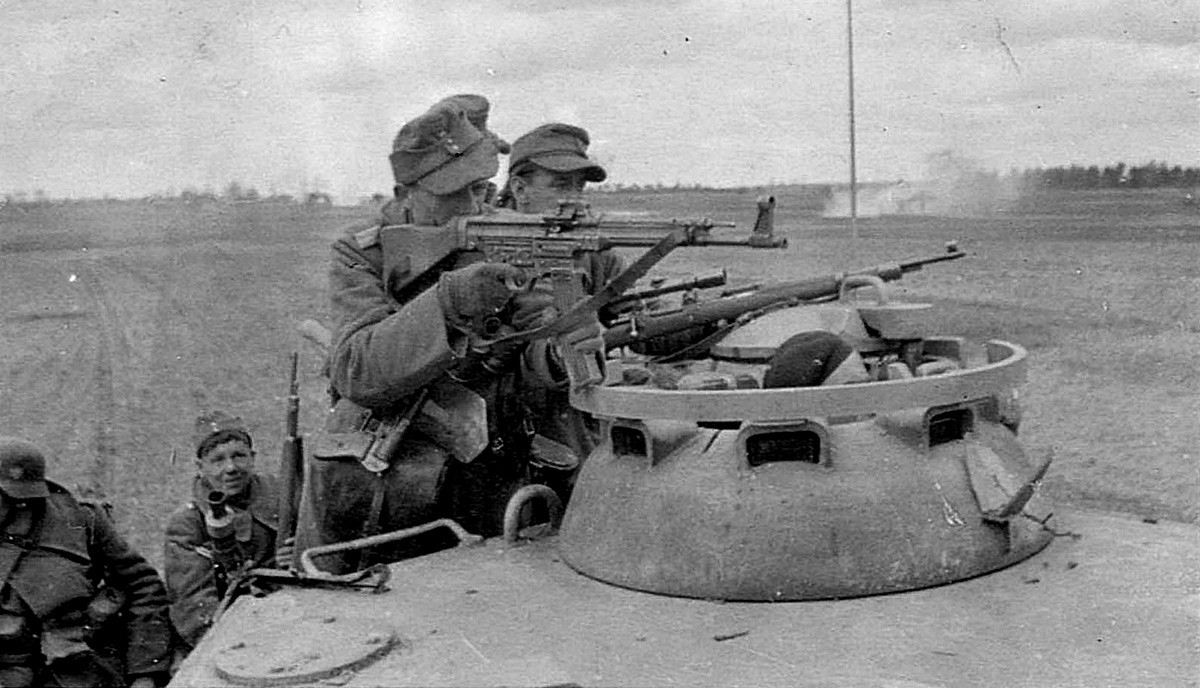 The largest number of Swedes was present in the SS ‘Viking’ and ‘Nordland’ divisions. However, the number didn’t exceed 10 percent in either division.

As the Third Reich’s luck was beginning to run out, instances of desertion among the Swedes grew. For many, the barbarism of the Germans in the East was a wakeup call to head home.

Nevertheless, Berlin’s last defenders in 1945 included a number of Swedes among their ranks.

There were more Swedes fighting the Soviet Union than there were those defending it with guns. The latter numbered only a few hundred, and consisted mainly of Estonian Swedes.

Having lived on Baltic shores for centuries, Estonian Swedes had in the summer of 1940 found themselves incorporated into the Soviet Union, together with three other Baltic republics. Soon after the German invasion, 300 of them were mobilized by the Red Army. 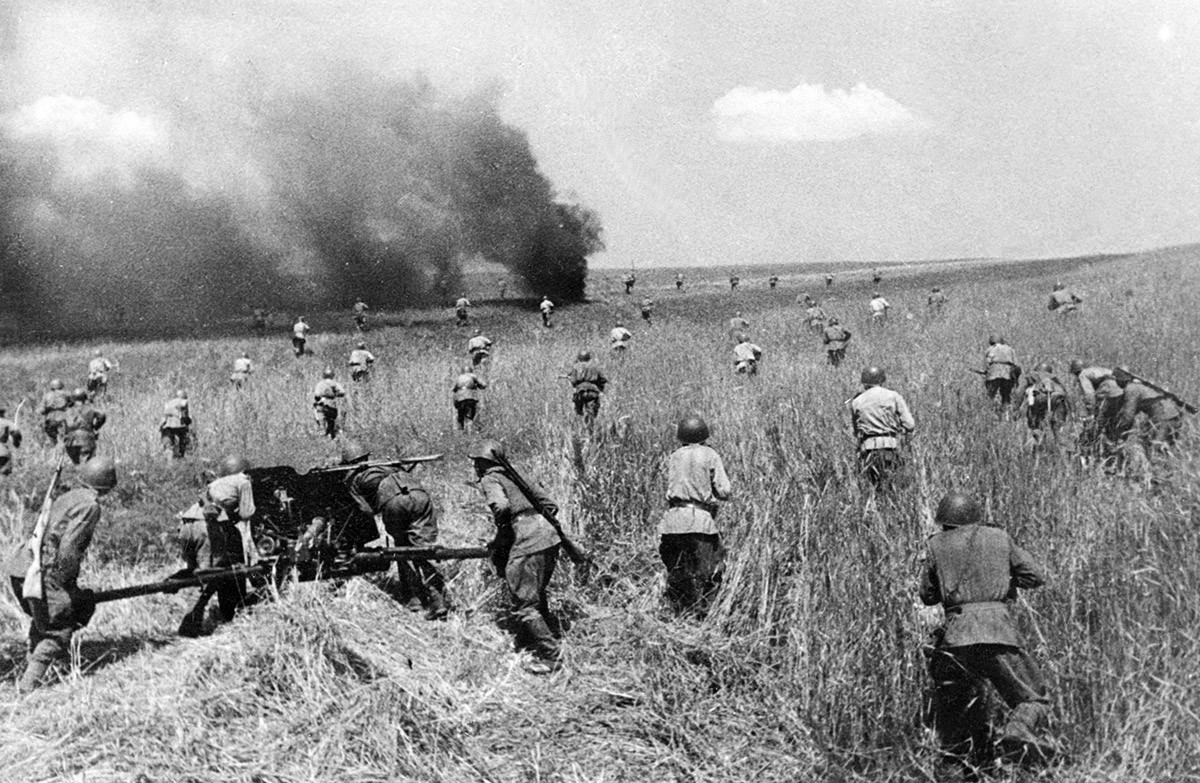 For the most part, the Swedes - in their dislike of the Soviet order - deserted en masse. However, there were those who walked the path to victory, often beyond. In this way, private Oscar Frieberg fought not only in the Battle of Stalingrad, but also against the remnants of the German army at Courland in May 1945, after its capitulation had already been signed.

At first, with no knowledge of Russian, Frieberg had had to converse with his comrades in gestures. “At first, there wasn’t much at all I understood, but after a while, I started to communicate freely,” he says. “It’s not like I was the only one like that. We had Uzbeks, Tatars, there were Kazakhs, no one paid any attention to my being Swedish.”

For the rule of the workers

Despite the small number of Swedish volunteer fighters on the Soviet side, the ones that did go - being communists - considered it a great honor.

In this way, Fredrik Åberg became a tank driver for the Russians in the Winter War on the Karelian strait. The “Swedish tovarisch” had been living in the USSR since the Civil War. Later, when World War II rolled around, Åberg again fought for the Soviet Union in the defense of Leningrad. 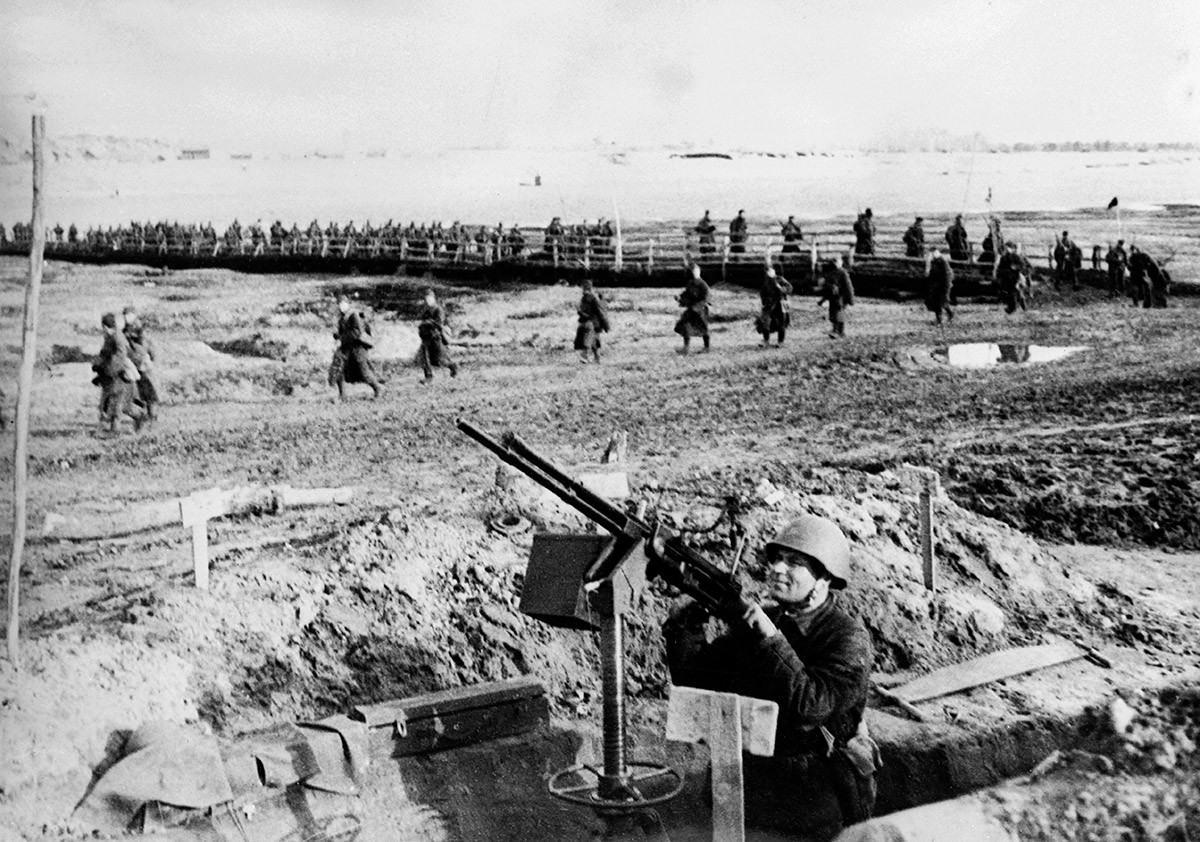 Soviet soldiers during the battle of Stalingrad.

Pelle Hansson from Sweden had arrived in the USSR from Brazil for permanent residence in the 1930s. He took part in the Soviet-Finnish war as a Soviet citizen, losing his life in battle.

One of the most well-known Soviet Swedes in WW2 was Anders Gustavsson. Having visited the USSR in mid 1920s as part of a Swedish communist delegation, he was taken aback by how well “the rights of the workers were defended”, soon relocating there permanently.

Major Gustavsson - in his role as German translator and member of the propaganda department - fought in Leningrad during the blockade, as well as the battle for Stalingrad and the liberation of Crimea and Eastern Prussia, receiving the Order of the Patriotic War.