How did Old Russia defend itself? 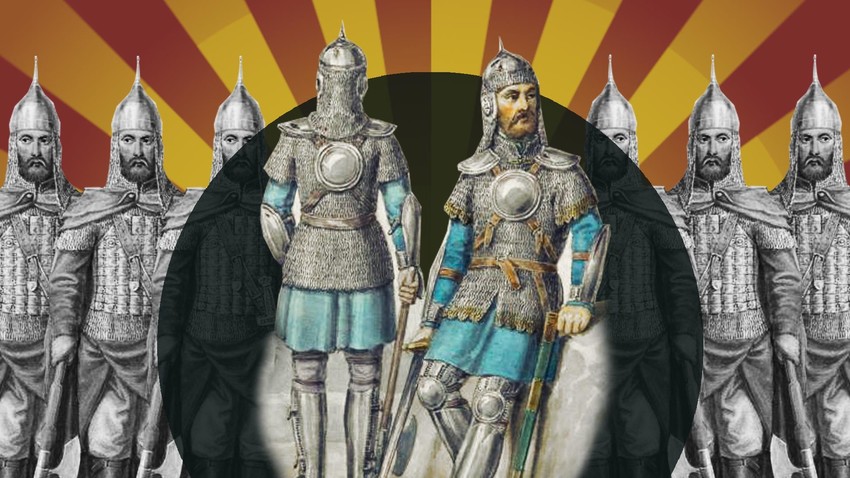 Fyodor Solntsev, Russia Beyond
From a band of warrior friends to the Landed Army, the old Russian military was exceptional. 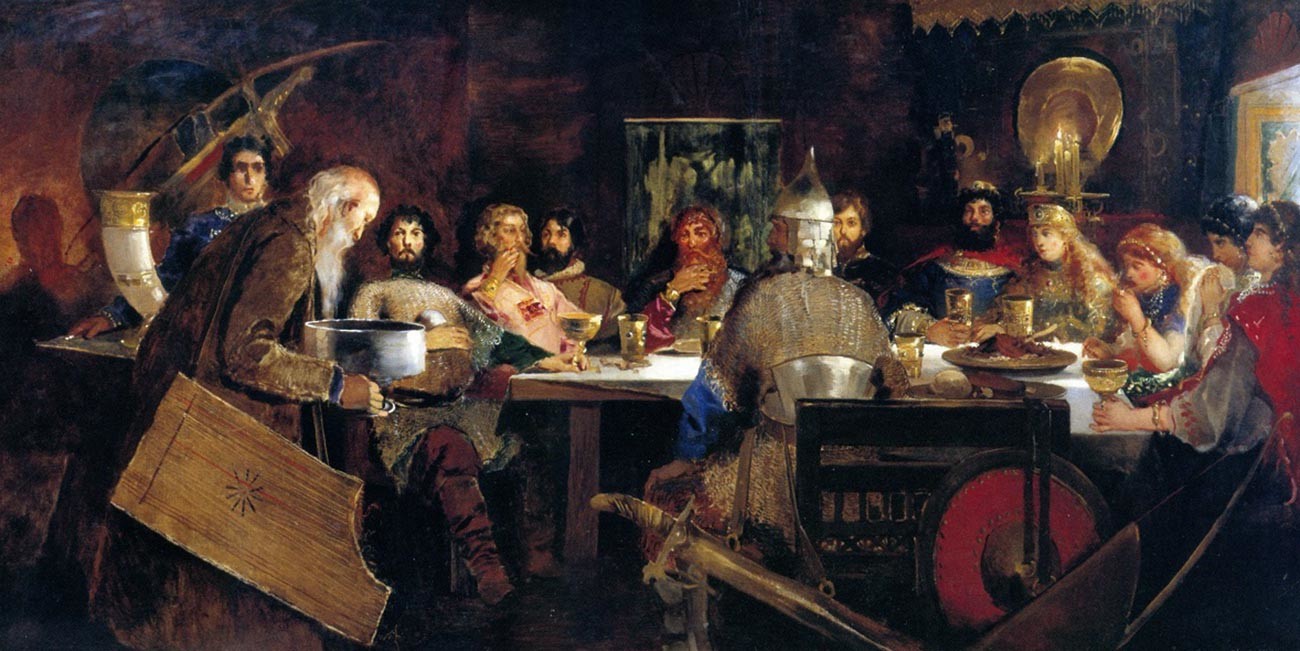 "The Bogatyrs' Feast at Knyaz Vladimir's Table" by Andrey Ryabushkin, 1888

The most ancient form of the Russian military formation (9th–11th centuries) was the druzhina, a band of experienced warriors presided over by a knyaz (prince). At first, the druzhina was a close-knit community: the members closest to the knyaz shared a table with him and lived in the same yard as him, as a kind of security force. There were no documents concerning the service, only oral agreements.

The first druzhinas were really small – just 200-300 warriors. The knyaz controlled his volost (loyal territory) with the help of druzhina: he regularly went around the volost, gathered taxes (in the form of money, goods, and provisions), and protected the population from enemies.

But as the Russian lands grew, druzhina morphed into larger formations – up to 2,000 warriors, and inside it, certain ranks existed. The upper part of druzhina consisted of boyars, who took part in the knyaz’s military council and controlled the respective parts of the lower druzhina. Some of the boyars could have their own druzhinas, or a less-noble knyaz could serve inside the druzhina of a more prominent one.

But the armies of the Russian duchies were not only druzhinas – from the people of the duchies, home guards were formed, usually for serious conflicts with other duchies or foreign enemies. The home guards were gathered following the knyaz’s order – warriors on horseback and with armor were accepted. 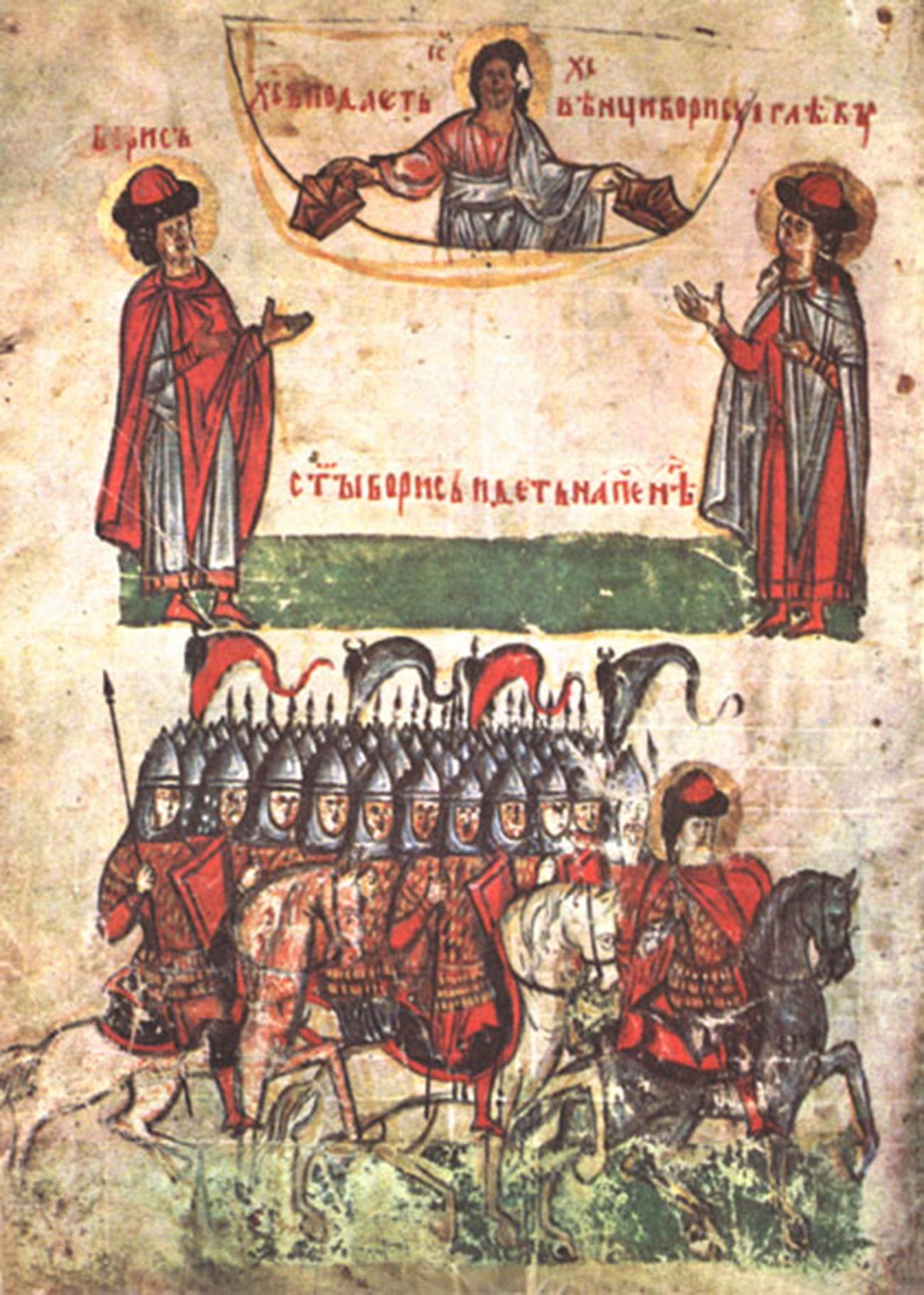 A druzhina commanded by a knyaz on a 14th-century miniature

In battle, the knyaz’ usually went first at the head of his druzhina and the home guard (if it was present) – this obsolete ‘heroic’ tactic was one of the reasons why the Mongol Tatars easily crushed the Russian warriors, as the knyaz’ was usually swiftly slaughtered. Another reason was that, even though Russian armies had horsemen, infantry, and archers, the organization and command of their formations were basic – they just followed the leaders and their flags.

Describing the Battle of the Kalka River (1223), in which a coalition of Russian knyazs was crushed by a Mongol Empire army led by the war commanders Jebe and Subutai, the Livonian Chronicle of Henry says: “Princes from all over Russia came out against the Tatars, but they did not have enough strength for the battle and they fled before their enemies. And the Grand Prince Mstislav of Kiev fell with forty thousand soldiers who were with him. Another Prince, Mstislav of Galich, escaped. Of the rest of the princes in this battle, about fifty fell…” even here, the chronicle reveals the Russian forces not as a united power, but as a congregation of separate princes.

During the 13th-14th centuries, when the Russian lands depended on the Mongol state, Russians slowly transformed their military to better fit the needs of attack and resistance. Which formations helped them finally defeat their enemies?

From town regiments to the Landed Army 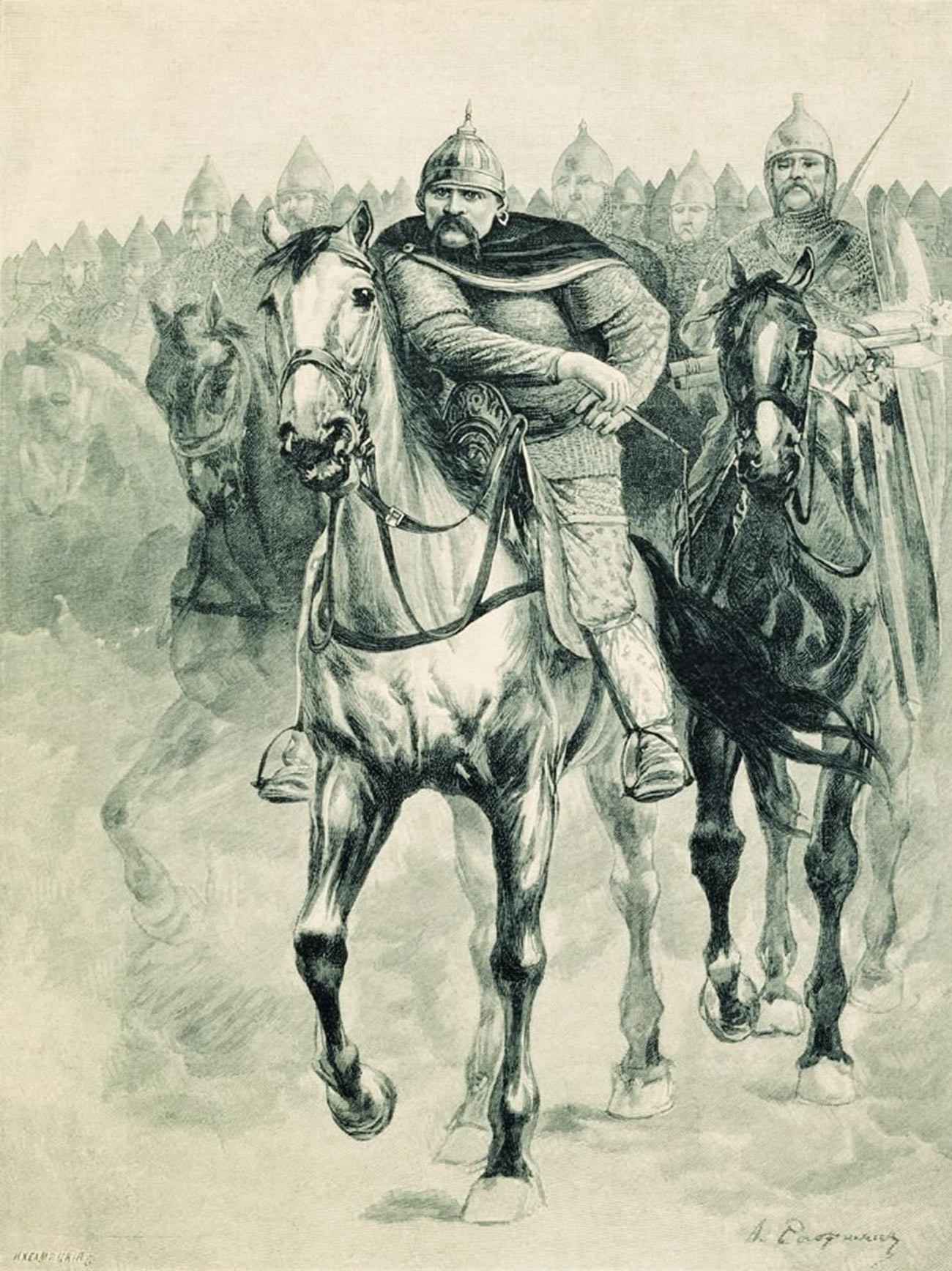 From 1228 to 1462, Russian warriors participated in no less than 302 wars and campaigns, of which 200 were with foreign adversaries. With time, and under the Mongol Tatar rule, Russian lands became split into closely-bordered duchies organized around fortified towns. Each of the duchies was controlled by a powerful knyaz, and each town was obliged to form a town regiment – a mixed-type military formation that consisted of both cavalry and infantry with various types of armor and weapons. While effective in the local wars between the duchies, these formations were not very well suited for a centralized, organized army. So the Russian knyazs found a way to improve the military organization: the creation of the Landed Army began.

Finalized by Ivan III, the Grand Prince of Moscow, the organization of the Landed Army was based on land ownership. The Grand Prince endowed his foremost aides (the knyazs and the boyars who served him) with the rights to control, own, and tax certain specified territories. In exchange, these people and their male offspring were accepted into lifelong military duty – they became the so-called “sluzhilye lyudi po otechestvu” (‘hereditary service-class people’) who were obliged to serve the Grand Prince, command parts of his army, bringing with them a certain number of troops. 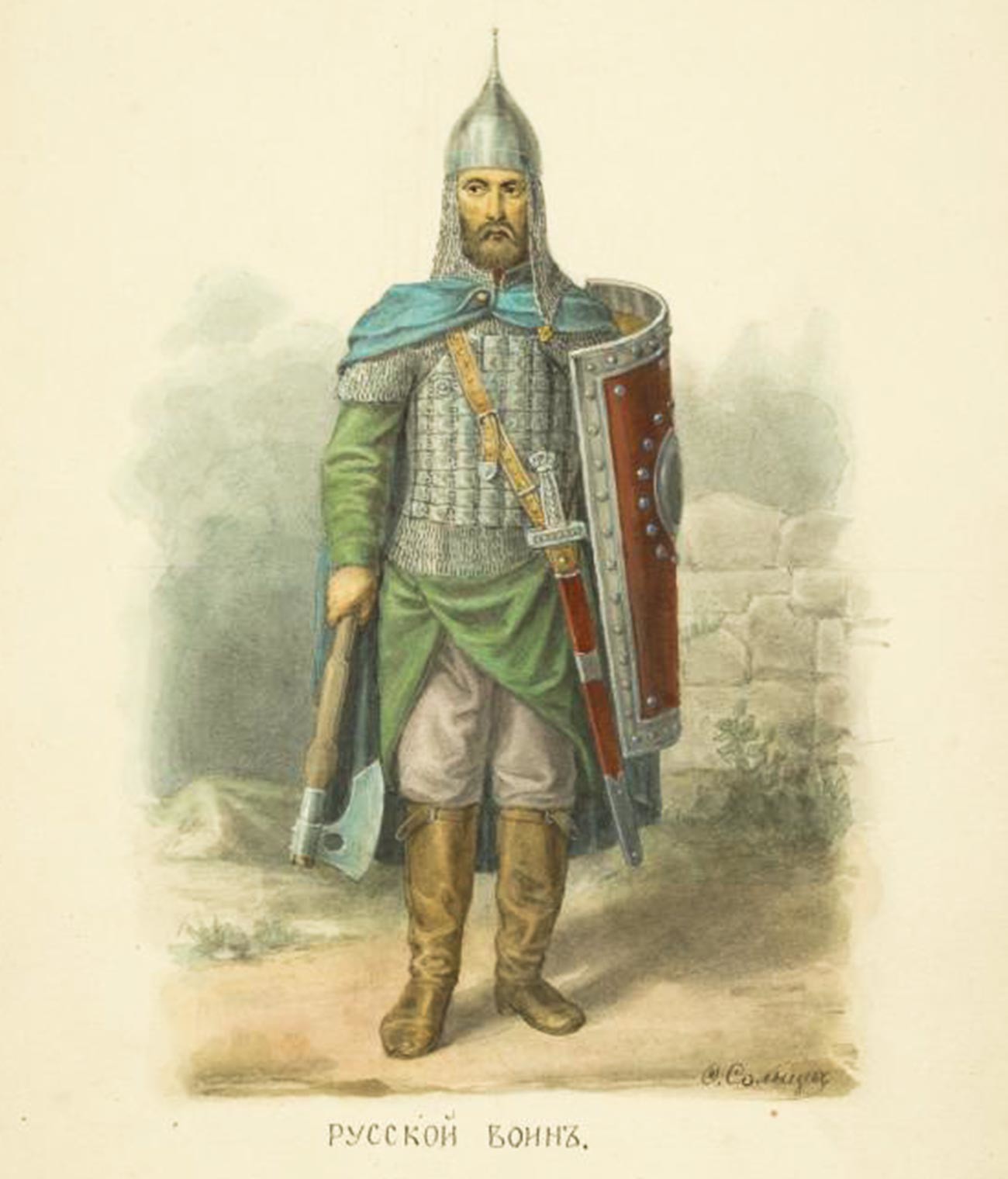 “As soon as they reach the age when they are able to bear arms,” English diplomat Giles Fletcher wrote in 1591 in his book Of the Russe Commonwealth, “they appear in the government office and declare themselves; their names are immediately entered in the book, and they are given certain lands to support them in their service, usually the same as those of their fathers.”

The hereditary service-class people and their relatives (the landowners) were always cavalry warriors, better equipped and experienced, and formed the elite and the most effective part of the Landed Army. Cavalry was seriously improved (following the lessons learned from the Mongol Tatars). But cavalry wasn’t enough – along with themselves, the hereditary service-class people brought infantry.

The infantry consisted of the people who were living on the lands belonging to the elite. Those of them called “sluzhilye lyudi po priboru” (‘the chosen service-class people’) were hired for military service and paid money. Among the ‘chosen’ were the first riflemen, artillerymen, engineers, blacksmiths, military architects, and other experienced men with unique skills. They were summoned to the army during wars and allocated to different parts of the army. 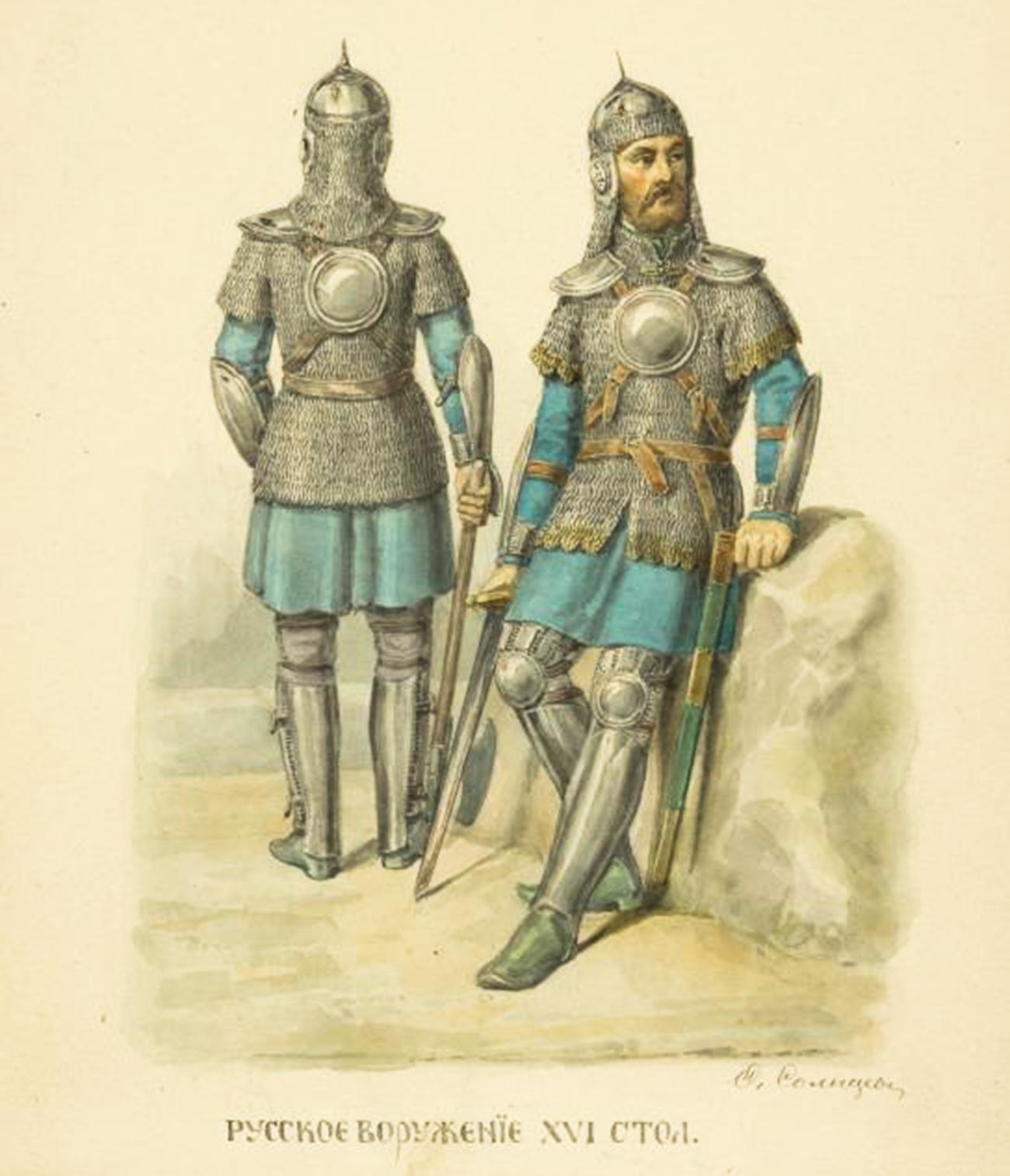 Fyodor Solntsev's reconstruction of the Russian infantry of the 16th century

The third large part of the Landed Army were “pososhnye lyudi” (‘conscripts’) that were drafted to the army from the lands belonging to the hereditary service-class people. They were common peasants, without special military experience, their usual occupation was agriculture – since the 16th-17th centuries, they were known as serfs. Most of the daily hardships of war fell on pososhnye lyudi. Some of them carried simple arms, but most of them were used to dig ditches, build fortifications, transport ammunition, cattle, and provisions for the army.

The Landed Army: administration and numbers 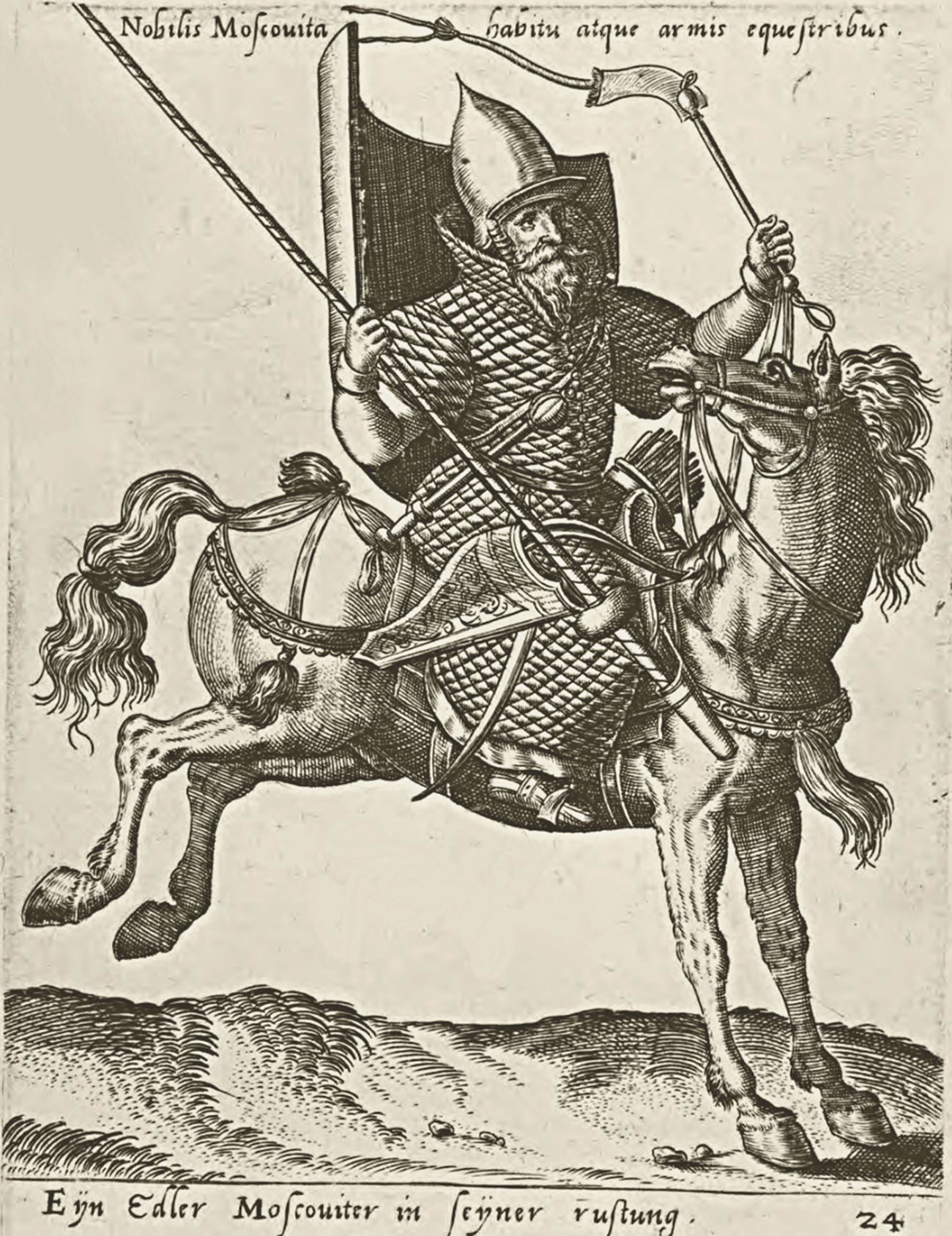 The Grand Prince of Moscow (later, the Tsar) and his closest circle of statesmen and military commanders – the Boyar Duma – appointed the commander in chief, called the “bolshoy voevoda” (‘foremost military commander’). He had junior voevodas under his control.

The chief military institution was called the Razryadny prikaz (or, simply, “Razryad,” ‘The List’) – in it, the lists of the service-class people were kept and updated. Here’s how one of these records (from 1621) looked: “Ivan, Andrew’s son, Ododurov. The inspectors [from Moscow] and [from] the locals said: good in his head, served on a good horse and had [another] simple horse, but no other serving men beside him.” A long description of Ivan’s various lands ensues, followed by his own words that he’s ready to serve the Tsar.

Razryad also served as the judicial institution for all service people, recruited the warriors and staffed the regiments, organized regular musters and training, controlled the army’s finances, and even governed border fortresses and cities. Officials from the Razryad were sent to the field army during the wars, where they formed a headquarters office, controlling the correspondence and keeping records about the military service. 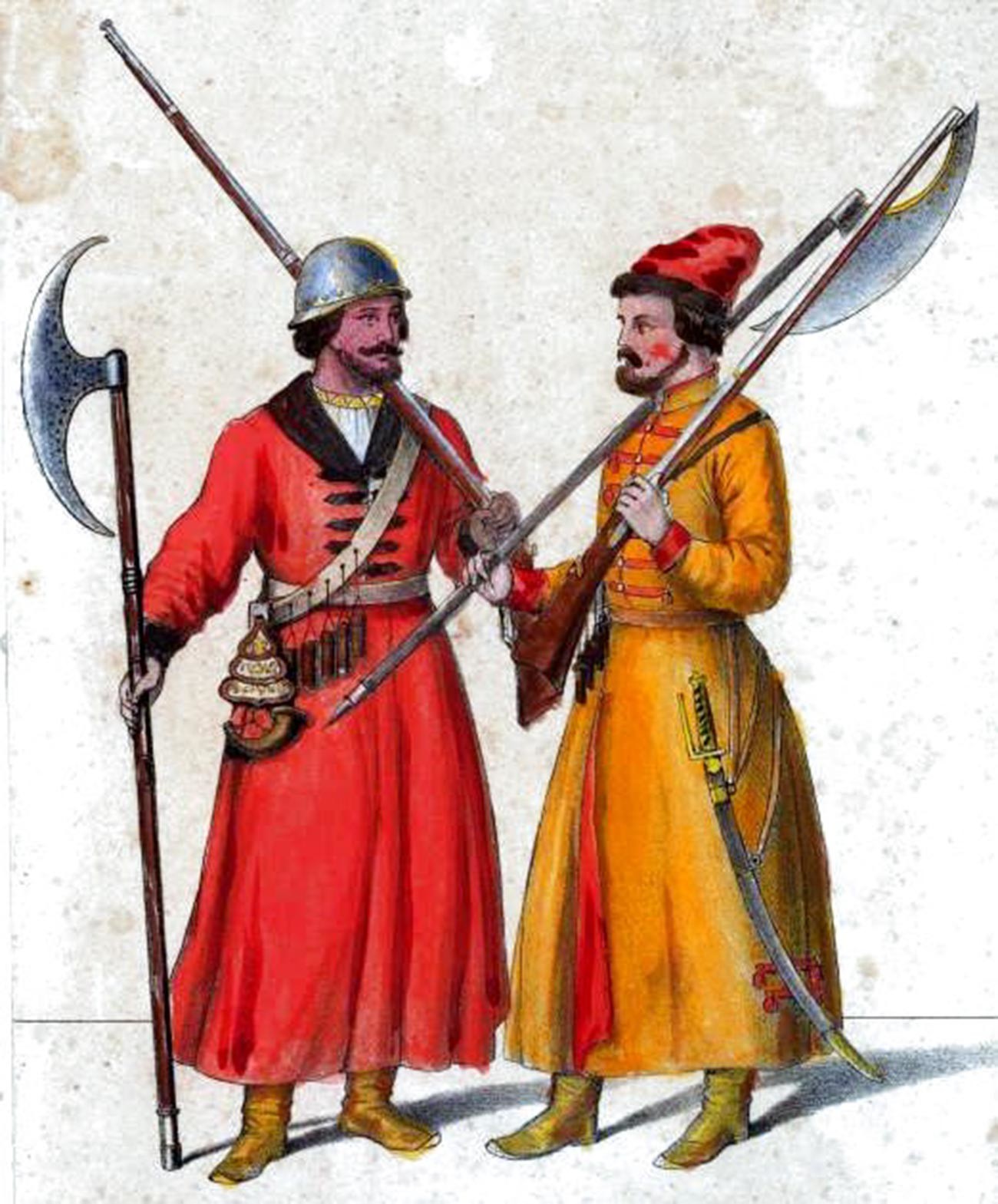 As for the exact numbers of the Landed Army, it is difficult to be certain – mostly because large parts of the Razryad records were lost in the fire of 1812 in Moscow. The best estimate is that by the end of the 16th century it numbered about 100,000 men. There are, however, some fragmented records that have the exact numbers. In 1630, the whole Landed Army numbered 92,555 men. A third of them were noblemen (hereditary service-class), a third – streltsy (chosen service-class), about a tenth or so Cossacks, and so on. In 1651, the Army totaled 133,210 men, in 1680 – 164,600. However, the Landed Army never gathered in its total number – these were just the numbers of all registered military men.

In the 17th century, the Landed Army went through some major structural, personnel, and administrative changes, which laid the ground for the all-encompassing military reforms of Peter the Great, but this is a topic for another article.