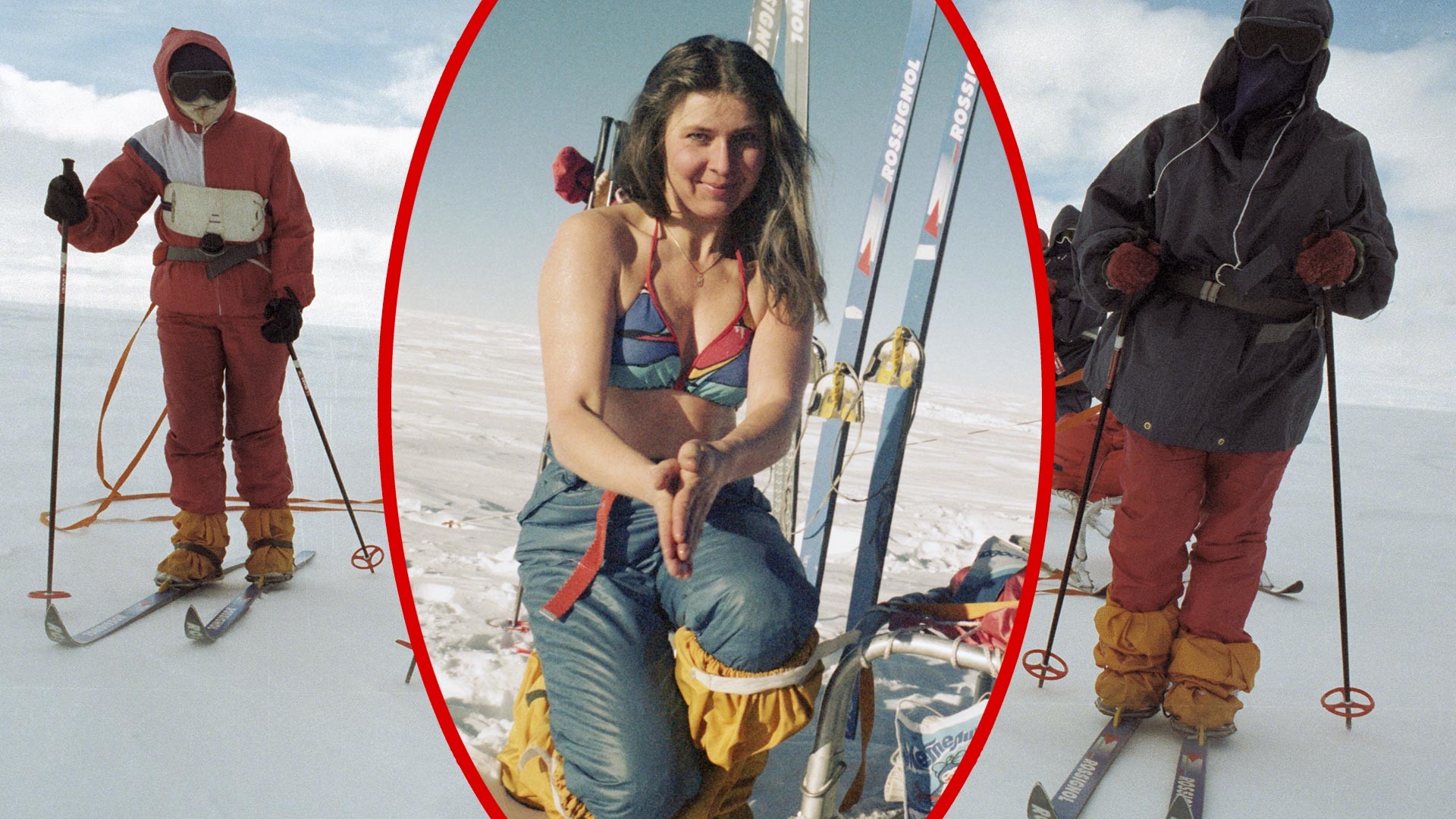 Irina Kuznetsova/TASS, Sputnik
The ‘Metelitsa’ was a Soviet all-female team of ski enthusiasts and explorers who beat men in what had previously been considered only men’s territory.

When renowned British polar explorer Walter William allegedly became the first man to have reached the North Pole by foot in 1969, he inspired a lot of people across the world. The Soviet Union was no exception.

A few years before the time of William’s achievement, a group of young female cross-country ski enthusiasts formed an all-female polar research ski team called Metelitsa (translates as “Blizzard” from Russian) that had a holy grail envisioned: to reach the South Pole by foot.

Although William’s iconic expedition put an idea of reaching the South Pole by foot in the heads of Metelitsa’s members, the team was initially created thanks to another inspiring albeit much less significant record.

Members of the Metelitsa team.

In 1966, a male team of students from the Bauman Moscow State Technical University crossed 725 kilometers from Moscow to Leningrad (currently St. Petersburg) on cross-country skis. The men finished the run in six and a half days, meaning that each day they covered the distance of approximately 110 kilometers on skis.

Valentina Kuznetsova, a 29-year-old radio engineer at one of the research centers in Moscow and a dedicated ski enthusiast, came up with an idea to recreate the men’s run with only one adjustment: all members of the next run would be female. 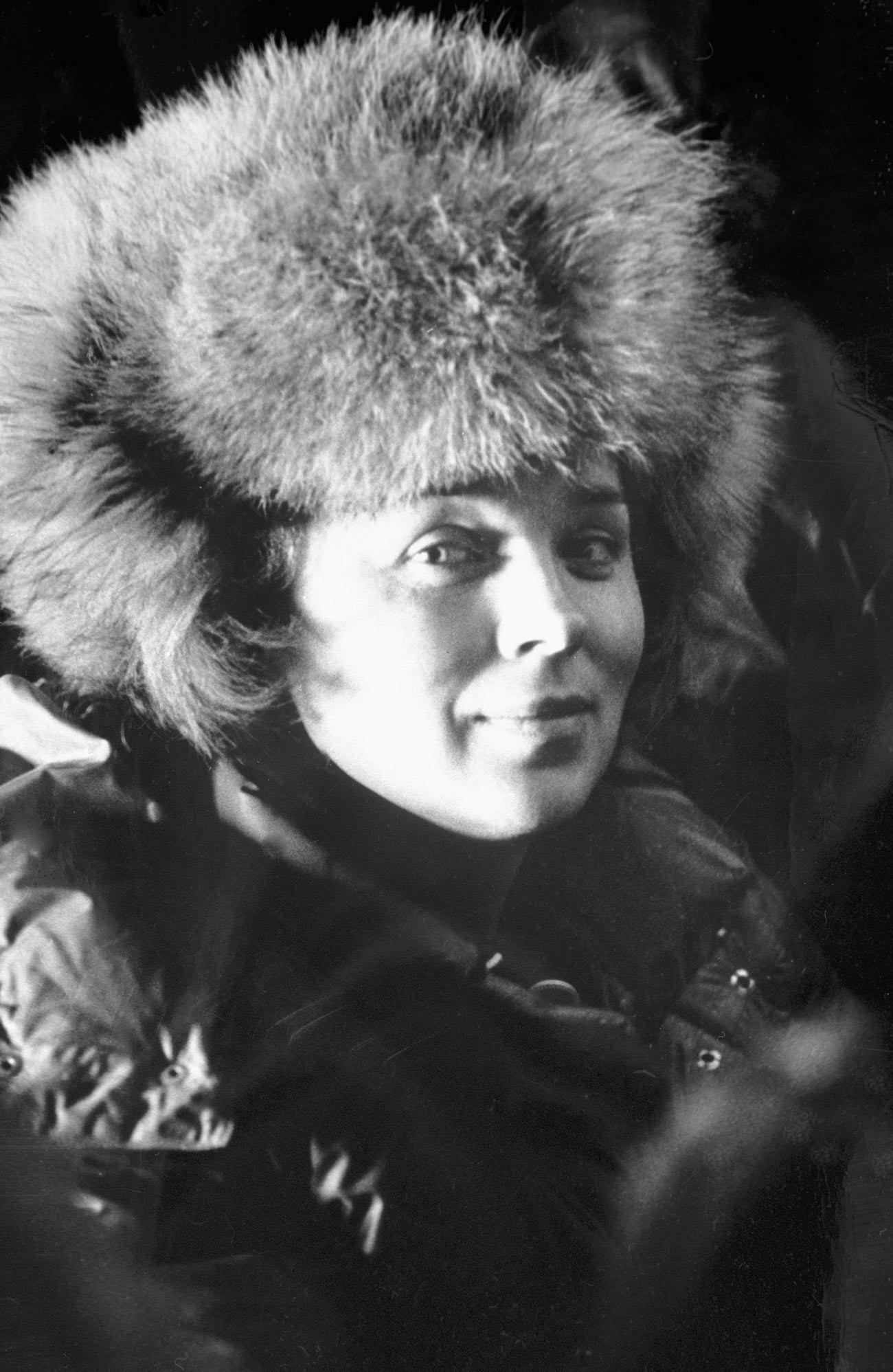 Her trainer supported the idea and the two convinced local authorities to sanction the initiative. Soon enough, other female volunteers came forward. Too many people discovered the women’s plan and eventually it was leaked to the press and made the news.

Sports Week, a local Moscow newspaper, ran an article headlined “Challenge specified”. It stipulated that the true goal of the newly formed female team, whose members were now actively training for the Moscow-Leningrad marathon, was to break the record that had recently been set by the male team. The full list of female challengers’ names was also handily provided.

“It was difficult to prepare the run before the article was published, but it became almost impossible after [that]. Almost the entire ski world has descended on us — [as on] some unknown impostors,” wrote Kuznetsova in her diary at the time.

Local authorities who had previously supported the idea of the female-run withdrew their support, as they were afraid of unwelcome publicity, fear of humiliation and bad all-Soviet PR in case the female team failed to break the male record.

Yet, Valentina Kuznetsova was not the type to give up easily. She knew what it took to overcome circumstances and personal problems, not by hearsay. When the future leader of Metelitsa was only five years old, the Nazis, who had occupied her native village in the Kursk region, learned that her mother was helping the resistance guerilla. 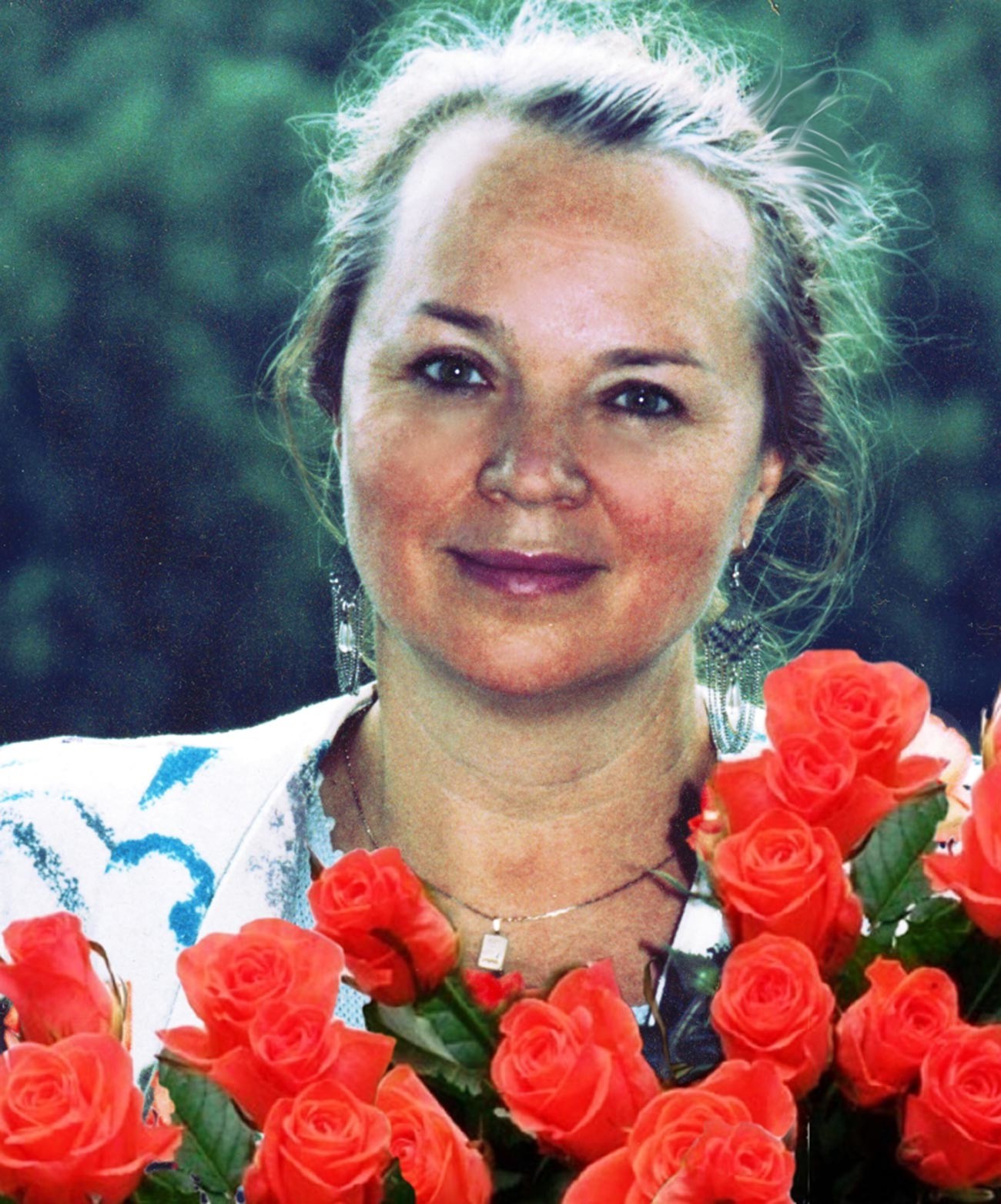 Valentina Kuznetsova was not the type who gave up easily.

“One terrible day, my mother, sister and I were taken out to be shot. A miracle saved us. But from that day on I could not talk,” remembered Kuznetsova.

The five-year-old child did not utter a word for the next two years after the incident and suffered from the bullying of other children who had found it funny.

“My coevals were very amused by this. They constantly forced me to say something. For some reason, they especially liked the word “Cockerel” and I tried to pronounce it until I was exhausted... To get rid of my tormentors, I decided to learn to say this word at all costs. So, thanks to child cruelty, I regained my speech,” confessed Kuznetsova years later in one of her many interviews.

By 1966, the Metelitsa leader was a fully capable woman, engineer, wife and mother of one. But just like the young child traumatized by the Nazis, Kuznetsova could not accept to backtrack so easily: the run had to happen.

From Moscow to Leningrad

The start, scheduled at 10 am on December 22, 1966, was marked by a sudden tragedy. A house that belonged to one of the Metelitsa members, Valentina Kurepkina, caught fire and burned to the ground.

But there was no stopping the first female ski run of such a scale and on the morning of the start, Valentina Kuznetsova and the rest of the team, including Valentina Kurepkina, met at the starting line.

“Nearly 99 percent of the work associated with any expedition is dedicated to the organization, preparation of the team and the route, removal or prevention of all risks, unforeseen complications and accounting for and predicting subjective factors. Contrary to any normal logic, it is with the start of the expedition that members of the expedition live a life worthy of its goals: a calmer life, although at the same time more difficult (physically difficult, but not morally),” wrote Kuznetsova. 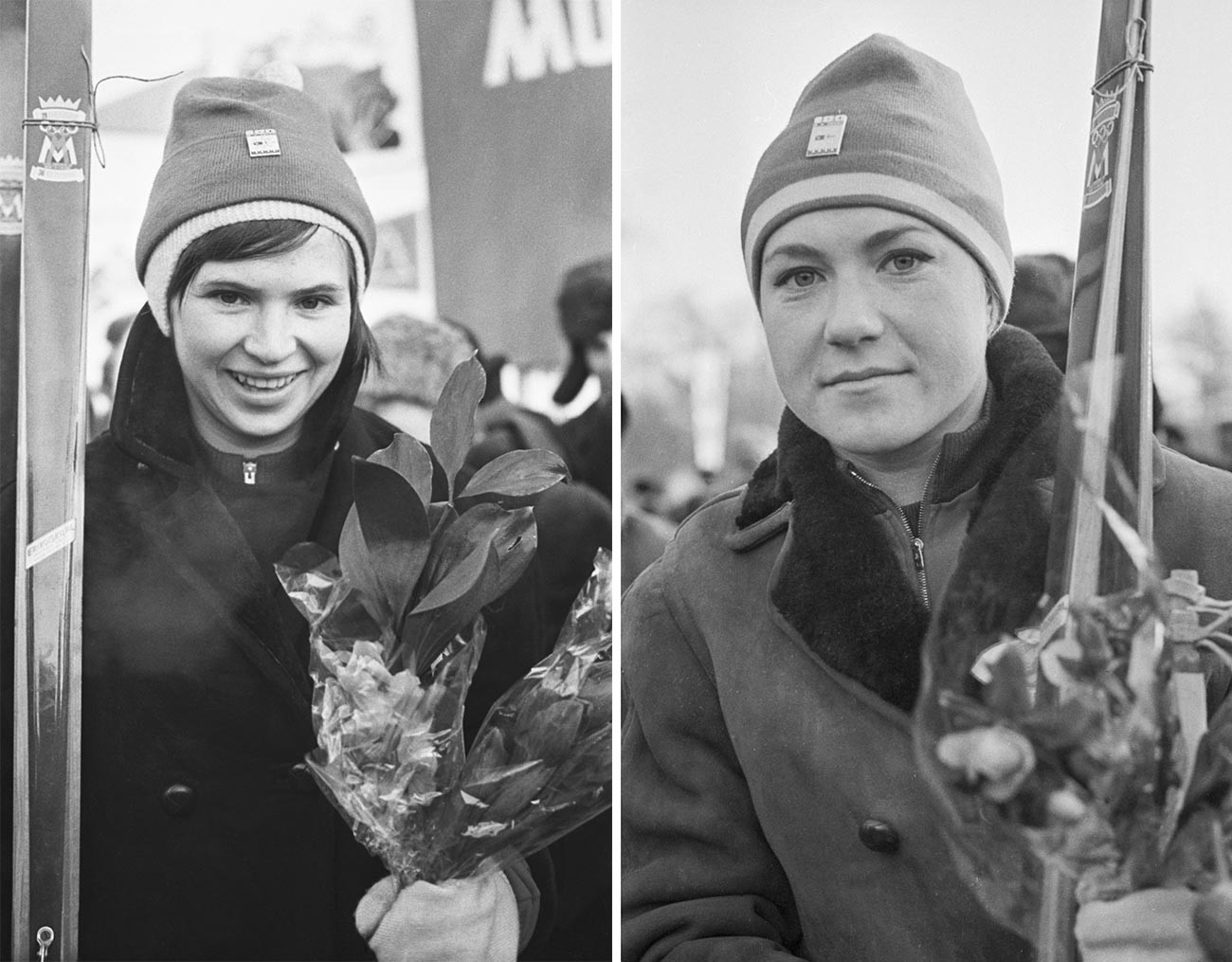 Members of the Metelitsa team after the Moscow-St. Petersburg run.

The young women pursued their first goal with dedication previously only achieved by men. They covered 98 kilometers every day, battling with temperatures as low as -34°C. It took them seven and a half days to complete the journey and thus, the women reached a symbolic parity with the men who had covered the same distance in six and a half days.

“Some of the team members later said that having a 37-38 shoe size, they had to order 42-sized shoes, because their feet were swollen so badly,” said Kuznetsova.

A newspaper article about the female-run titled ‘725 km of courage’ raised the question that had already hung in the air among the Metelitsa members: would they continue?

After their first success, the Metelitsa team conducted multiple expeditions. They went to Helsinki, Alaska, but also some other hard-to-access areas, such as Cape Chelyuskin, Severnaya Zemlya and Franz Josef Land.

“The Metelitsa has been on expeditions to Franz Josef Land eight times — more than to any other places. We know the islands and straits of the central part of the Franz Josef Land better than the streets of Moscow,” wrote Kuznetsova.

Each new run of young women was more daring and also more dangerous. The women had to resist snowstorms, extreme temperatures, thin ice ready to fracture and kill them and even wild bears.

“Before our first expedition, instructors told us: ‘If it [a bear] is after you, you won’t see it [until it attacks]. And if you see it, it’s just walking by’,” wrote Kuznetsova. 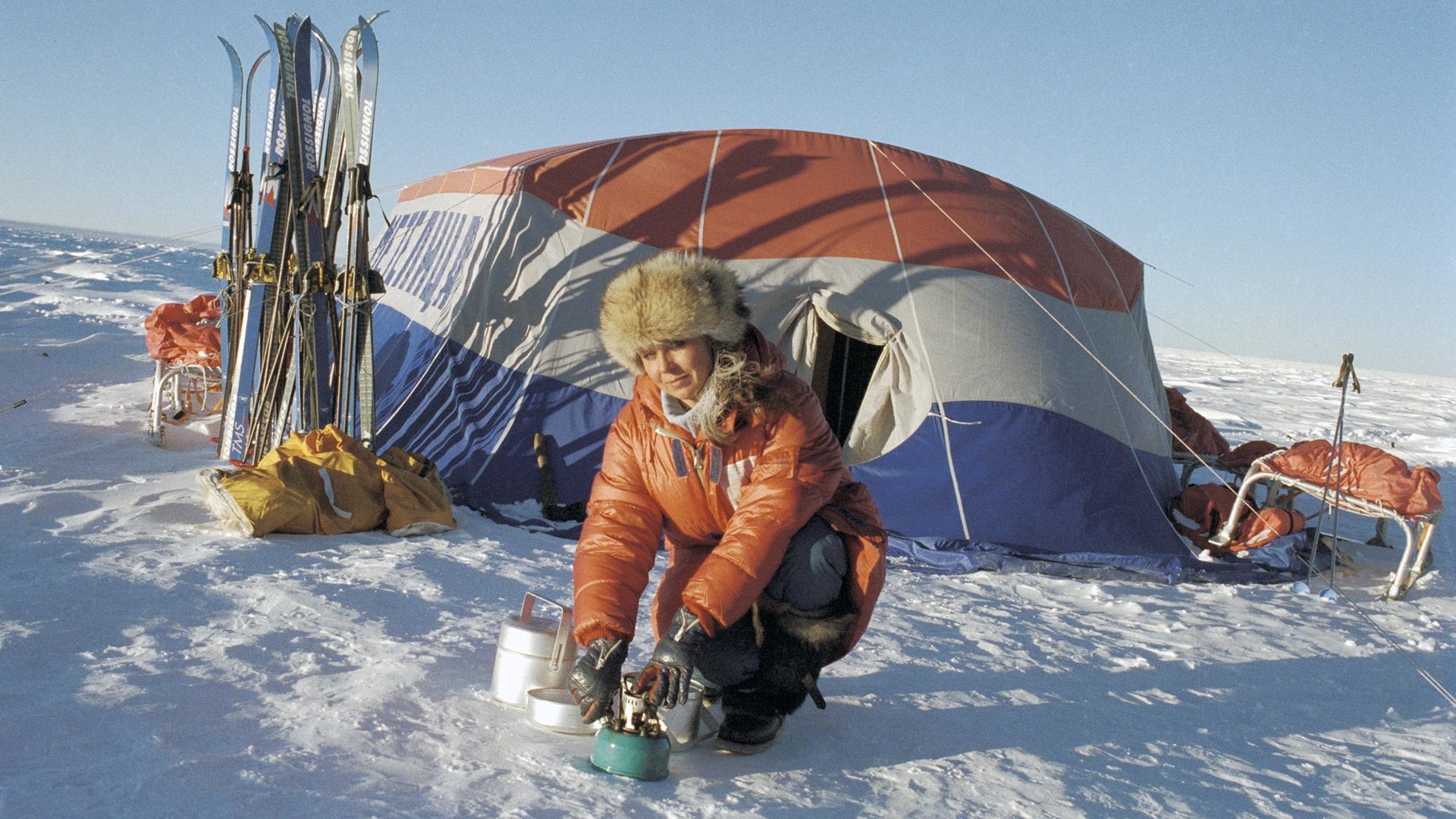 A member of Metelitsa during an expedition.

To protect from bears, the team always had torchlights and a gun ready. During one of the expeditions, the women were given a Kalashnikov rifle and two full rounds of ammo.

The team spent a decade on numerous expeditions, honing their skills, mastering endurance and resistance to the elements. Yet, Metelitsa’s holy grail — Antarctica and the South Pole — remained unattained.

However, the time for the Soviet women to set foot on the uninhabited continent for the first time came in December 1988. After a reconnaissance team had visited the continent and planned the run, nine members of the Metelitsa team landed at the first Soviet Antarctic science station, Mirny, intending to reach Vostok Station, another Soviet research station further inland on Princess Elizabeth Land in Antarctica, covering 1,420 kilometers on skis along the way. 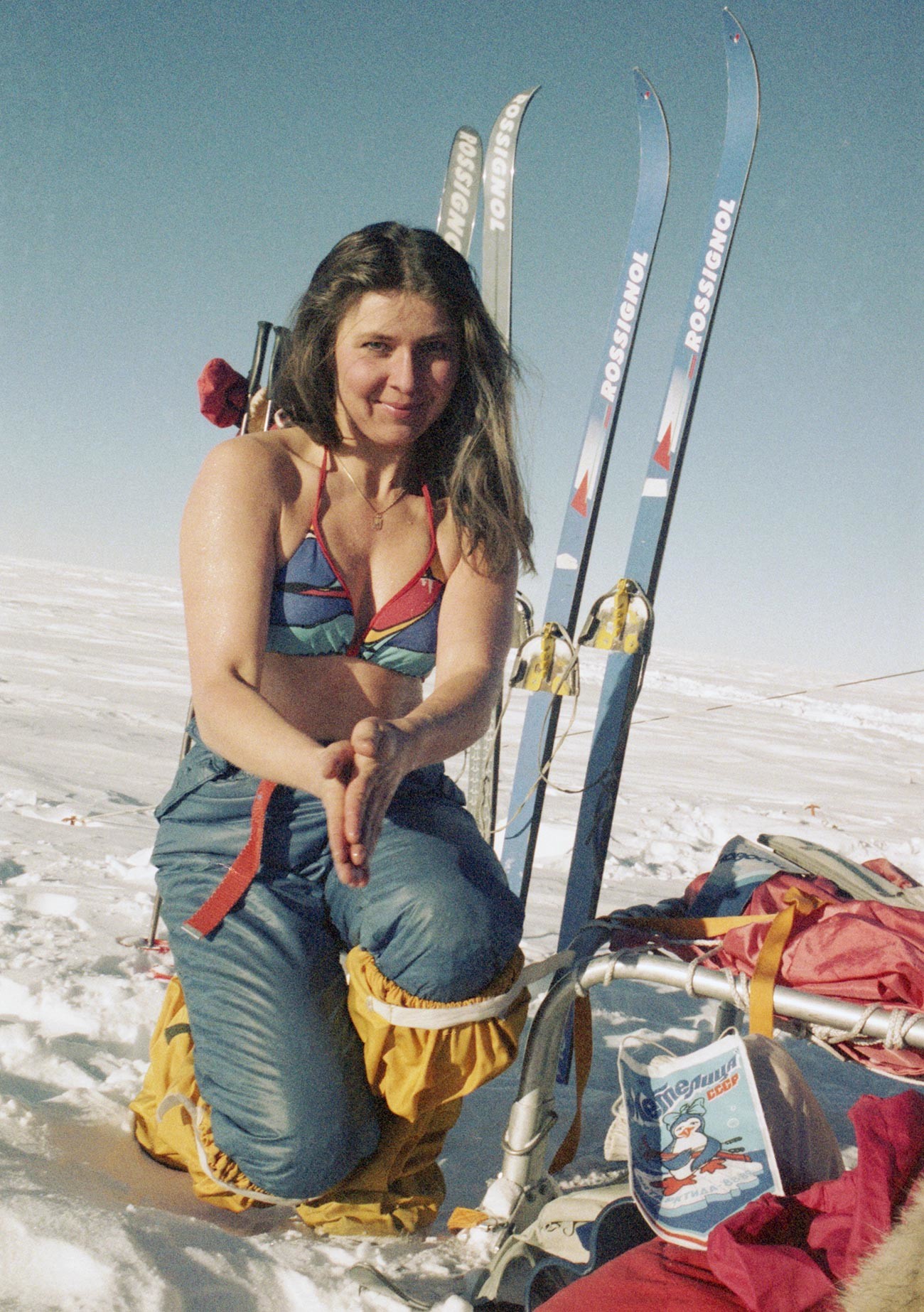 A Metelitsa member in the Arctic.

The expedition group consisted of Valentina Kuznetsova — the permanent team leader who was now a 51-year-old woman — and other old and new members of Metelitsa: Natalia Bakhareva, Irina Gurieva, Svetlana Gurieva, Svetlana Zubkova, Lyudmila Kosareva, Irina Romanchenko, Elena Khovantseva and Kuznetsova’s 27-year old daughter Irina. The women planned to walk a long and difficult route in the Antarctic, although the South Pole remained out of their mission’s grasp for the moment.

“When we landed at the Mirny Station, we were told: ‘Girls, if you walk at least three days on skis, you will be superheroes.’” We walked for 57 days. When the team started, the temperature was -7°C, when we finished, it was -48°C. At night, the temperature dropped to -55°C. We walked from the coast to the center […] from the 0 mark [altitude above sea level] to the height of 3,800 meters. Given the lack of oxygen and other conditions, these 3,800 meters were equivalent to 5,000-6,000 meters on the Tian Shan [mountain range],” wrote Valentina Kuznetsova.

Before the Metelitsa team ventured to cross 1,420 kilometers among the snow and ice of Antarctica, very few people had believed it was possible. For the last 12 kilometers, the women walked dressed in red uniforms, to mark the latest achievement of the Soviet women that had previously been thought to be highly unlikely.

For the last 12 kilometers, the women walked dressed in red uniforms, to mark the latest achievement of the Soviet women that had previously been thought to be highly unlikely.

The concluding entry in the travel diary that the team regularly filled on the way was concise but emotional: “Lord, have we really done it?!”

They had; and seven years later, in 1995, five members of the Metelitsa team hoisted the Russian flag on the South Pole, reaching the team’s chief goal and fulfilling the dream of its founder.

Metelitsa members at the South Pole.

Ever since their first run from Moscow to St. Petersburg, the women were continuously asked why they needed to do what they did and what motivated them?

Metelitsa’s founder Valentina Kuznetsova, who died from natural causes in Moscow at the age of 73 on September 3, 2010, liked to parry with a question of her own: “And why do people climb mountains, storm the sky-high peaks, cross the oceans on boats, fly into uncharted space? A restless mind and a great mission – to be a human – leads and keeps leading people into the unknown […].”

Click here to read a story of fearless Russian explorers who beat the Brits to discover Antarctica.