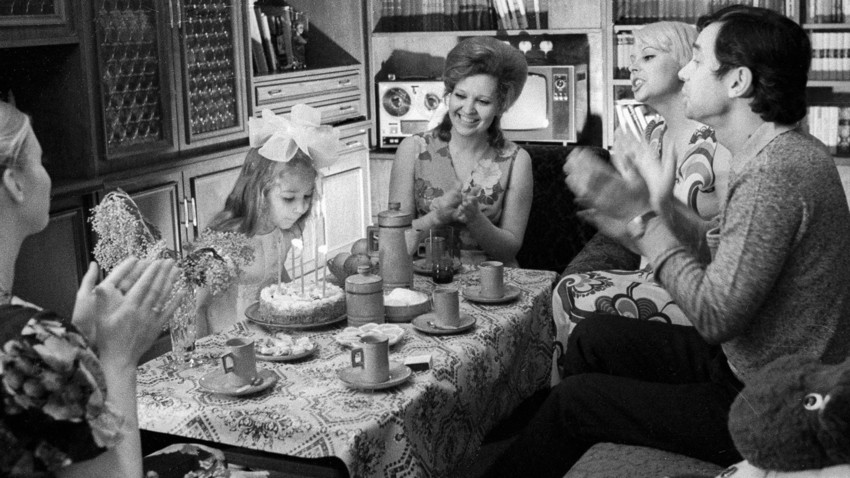 Boris Babanov/Sputnik
From children to adults, birthdays in the USSR were always a social and fun experience.

Most Soviet people weren’t rich. Neither were there any event agencies that could have planned a birthday party. To celebrate their birthdays or those of their children, Soviet people had to be creative. 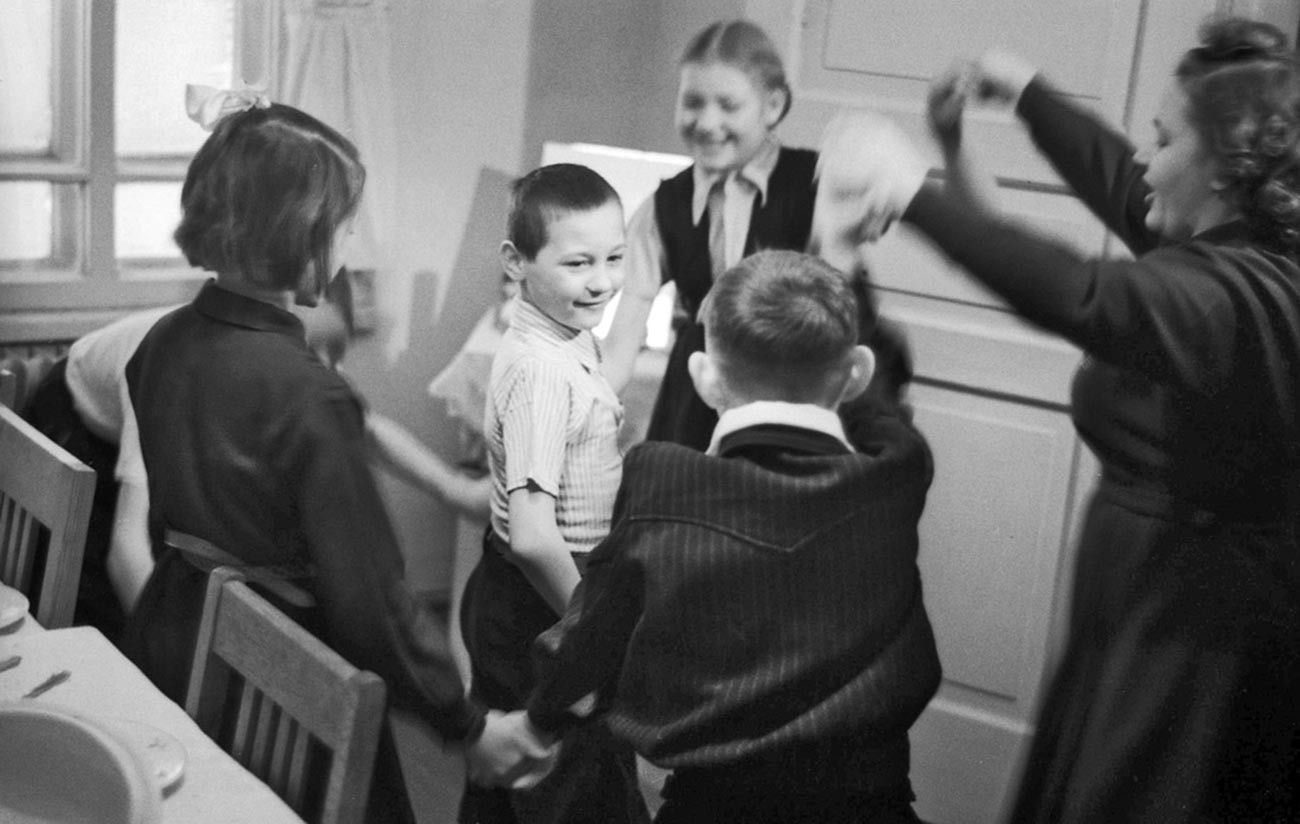 Children congratulate their classmate on his birthday party.

If it was a child’s birthday, the kid’s mother, as a rule, or grandmother, used to bring a self-made cake to school or kindergarten, so that the birthday child could treat his or her classmates.

Usually, it was a modest feast. There was either a small cake or sweets, gingerbread and waffles - just enough to treat the birthday child’s friends. 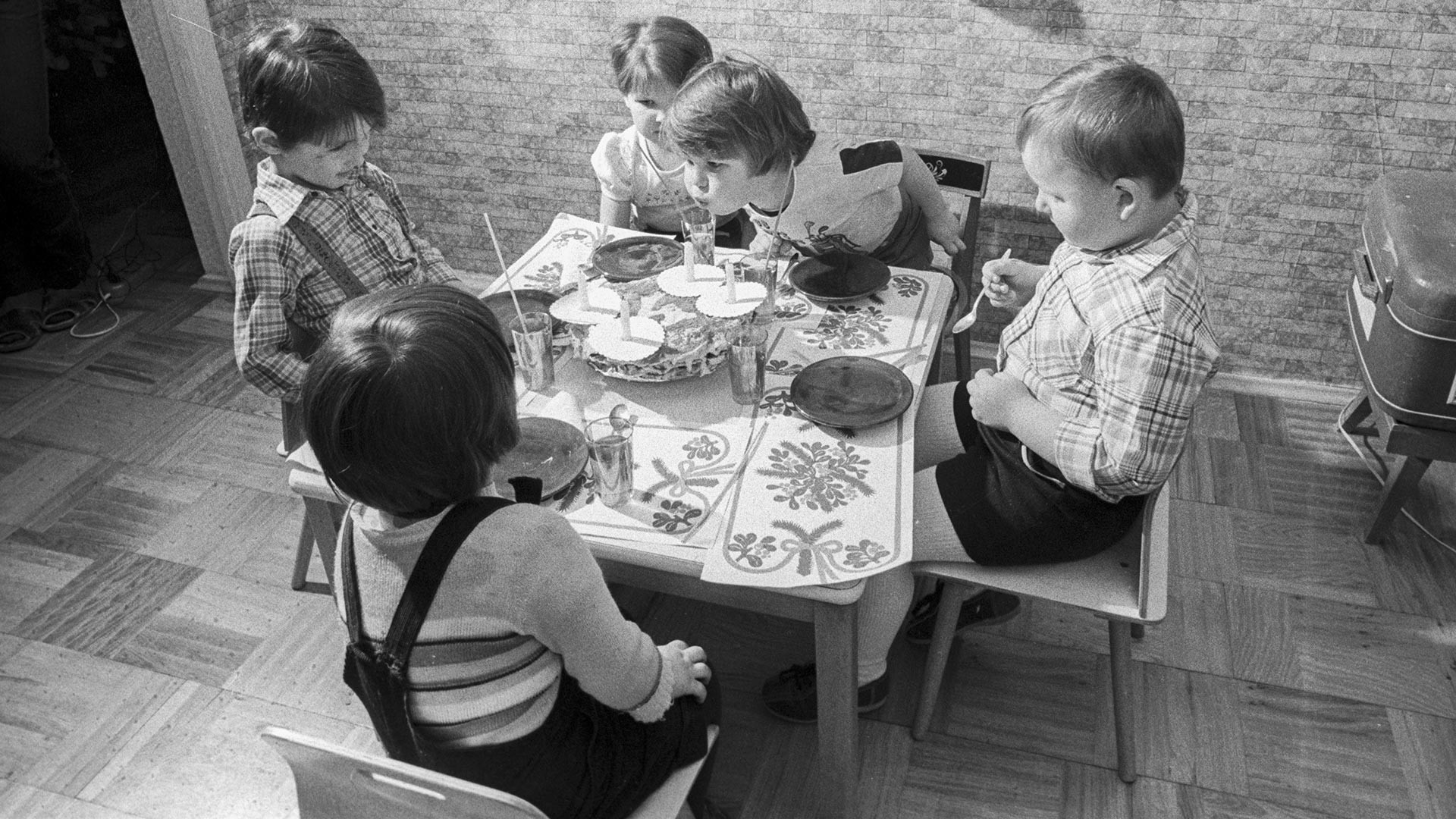 A typical child’s birthday in the USSR looked like this.

A birthday child was then pulled by his ears the number of times that equaled his age, while everyone in the room counted out loud. Sometimes, the pulling was substituted by a more humane yet less common ritual, when fellow children rocked and tossed a birthday child in the air while they were sitting on a chair. Then everyone yelled “Hooray” and proceeded to eat the sweets or the cake with tea.

Sometimes, a birthday child would be allowed to invite his best friends to a house party. In this case, the menu was usually more elaborate and, aside from sweets, also included a main dish like chicken or fish with potatoes, salads, fruit, homemade compote or tea. 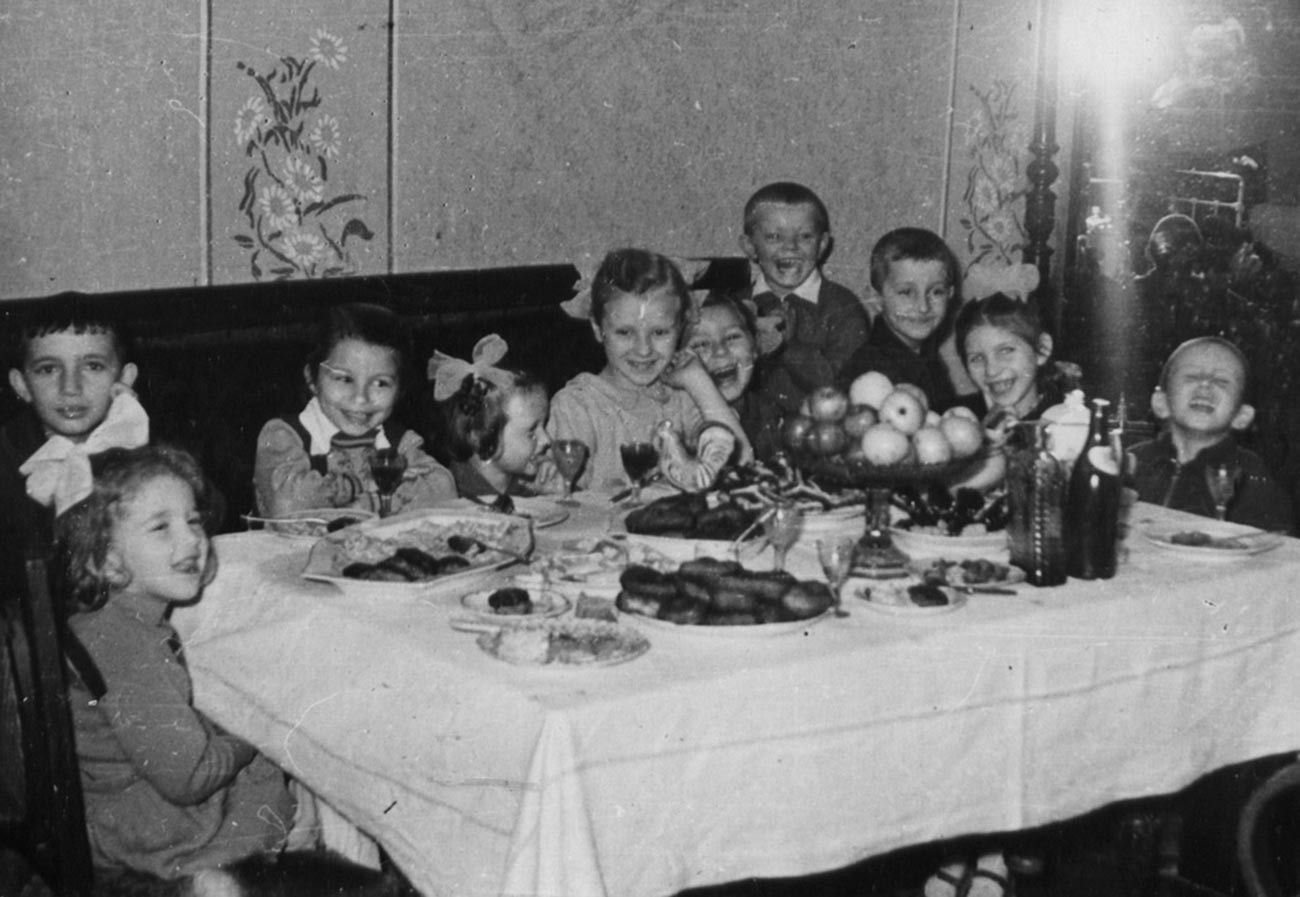 A typical birthday feast in the USSR in the 1960s.

Interiors of the apartments where a birthday was to be celebrated were sometimes decorated with hand made paper decorations, photos of a birthday child and balloons. 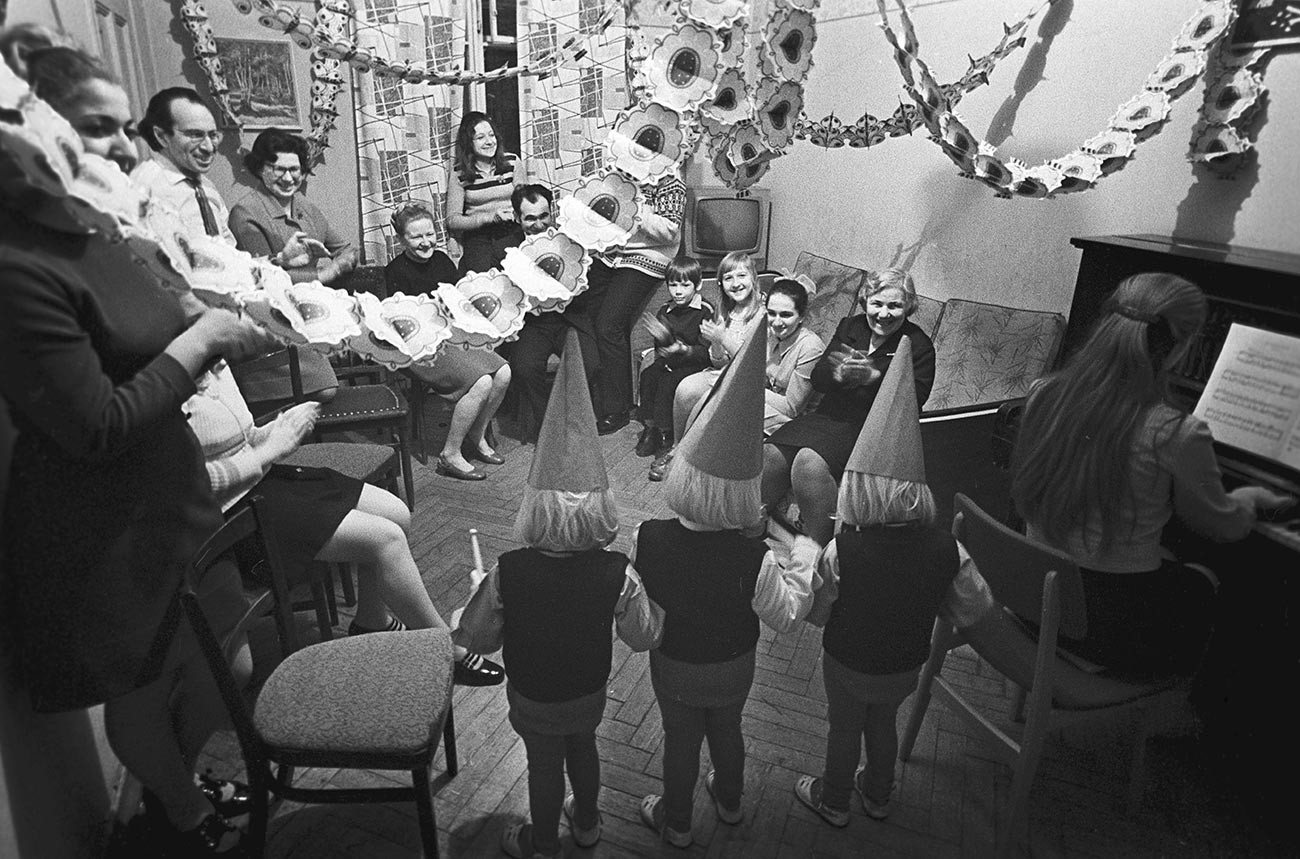 A hand made decoration featuring a birthday child.

Since throwing a house party took more effort than bringing treats to school, guests were expected to bring more substantial and valuable presents. While the birthday child’s parents sometimes opted for giving practical things like new clothes or school items (a backpack, etc.), fellow children usually brought something more entertaining, albeit less practical, like toys or other items of great interest to children. 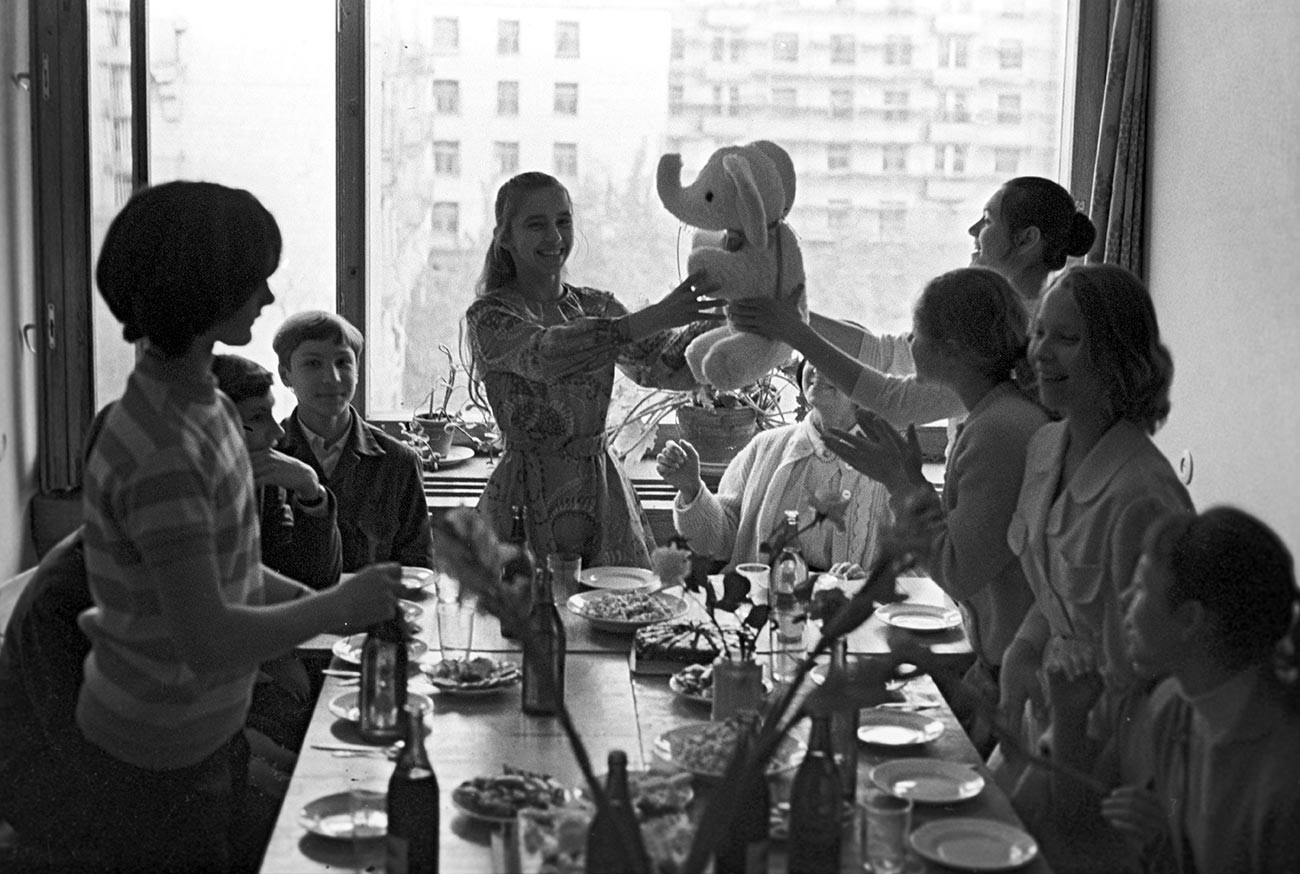 After everyone had had enough food, guests and the birthday child went on to play games either inside the house or, most often, outside. Young children played hide-and-seek or cops and robbers, a game that was known as ‘Cossacks and Rogues’ in the USSR. 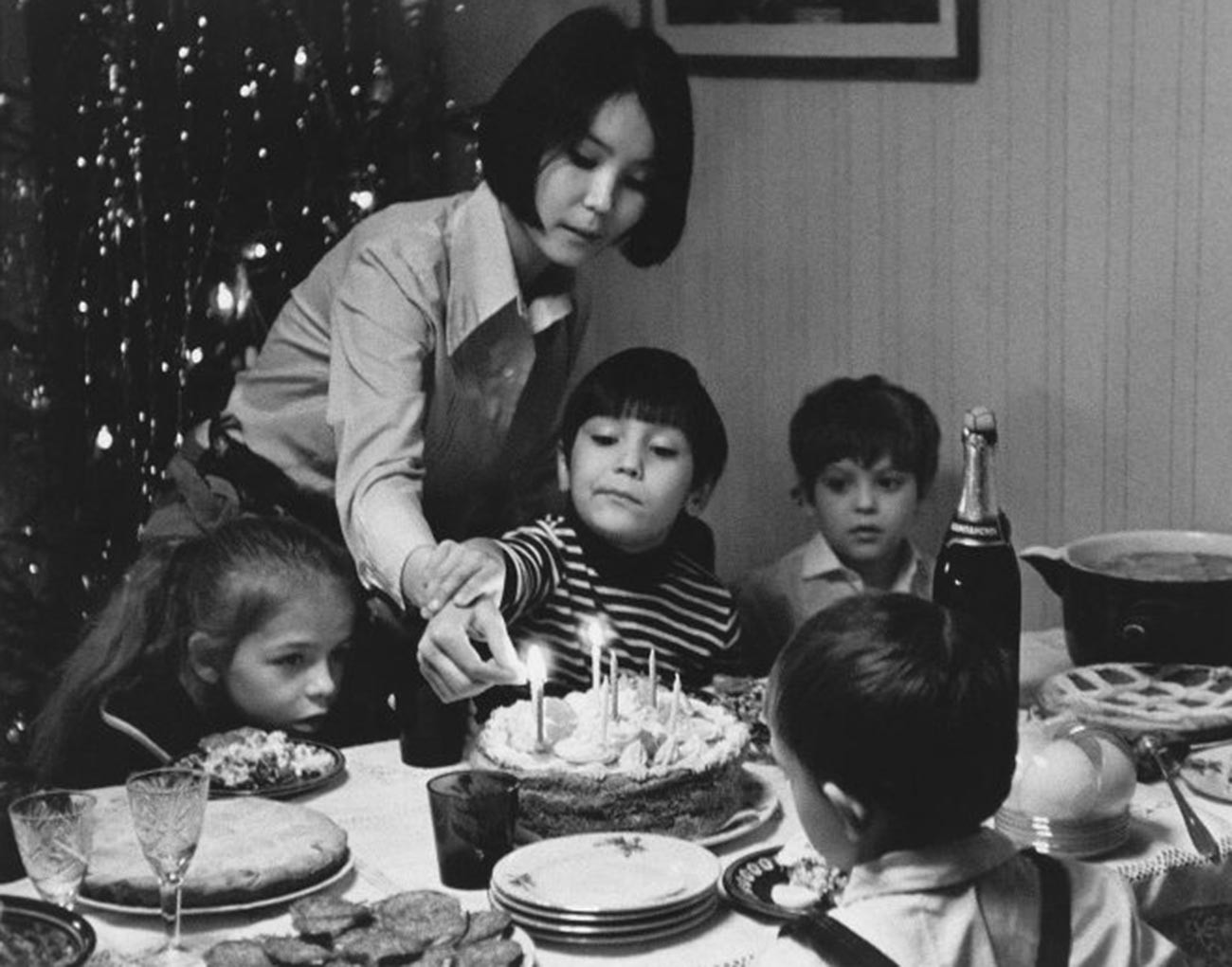 Sometimes, guests stayed at a birthday child’s home longer and played a game that resembled a game of piñata: A bunch of toys and other valuables were attached to ropes that descended from one horizontal rope. Guests covered their eyes with a band and took turns cutting the ropes with scissors to claim the toys. 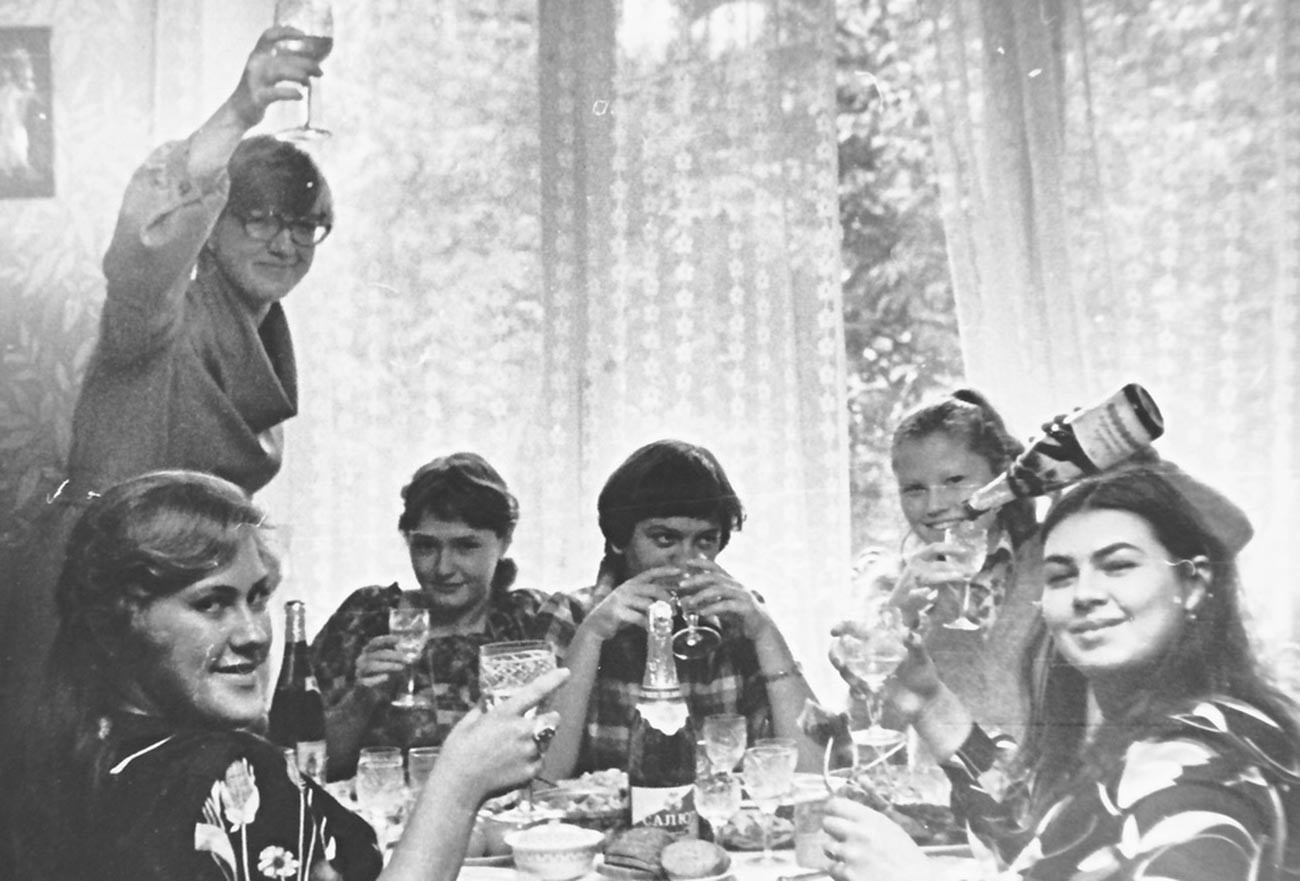 Women celebrate the birthday of their friend in 1979.

Grownups celebrated their birthdays at work with colleagues or at home with friends. If, on their birthday, they went to a factory or an office, they, too, had to bring some food and drinks to treat colleagues. 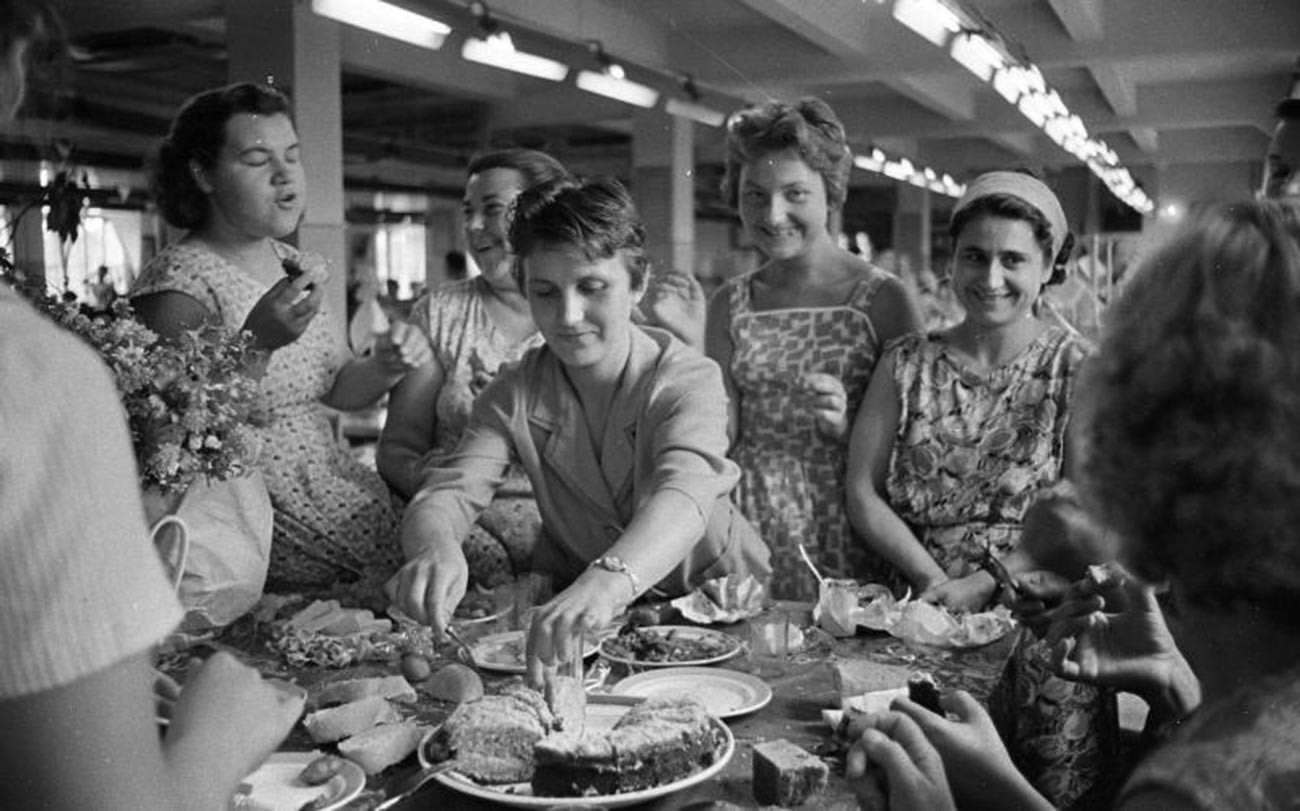 Women celebrate the birthday of their colleague at a garment factory in Moldavian SSR. 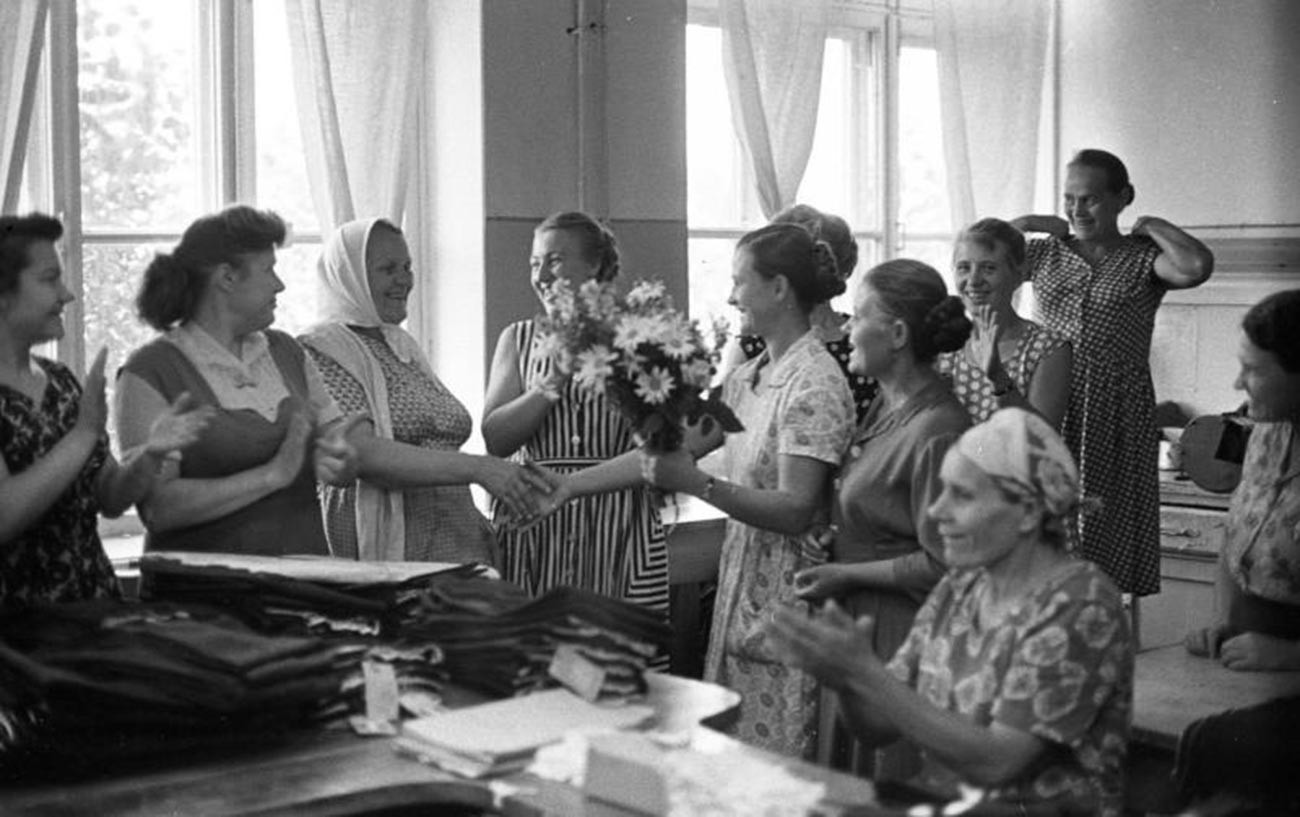 In turn, colleagues congratulated a birthday man or woman and gave them presents. 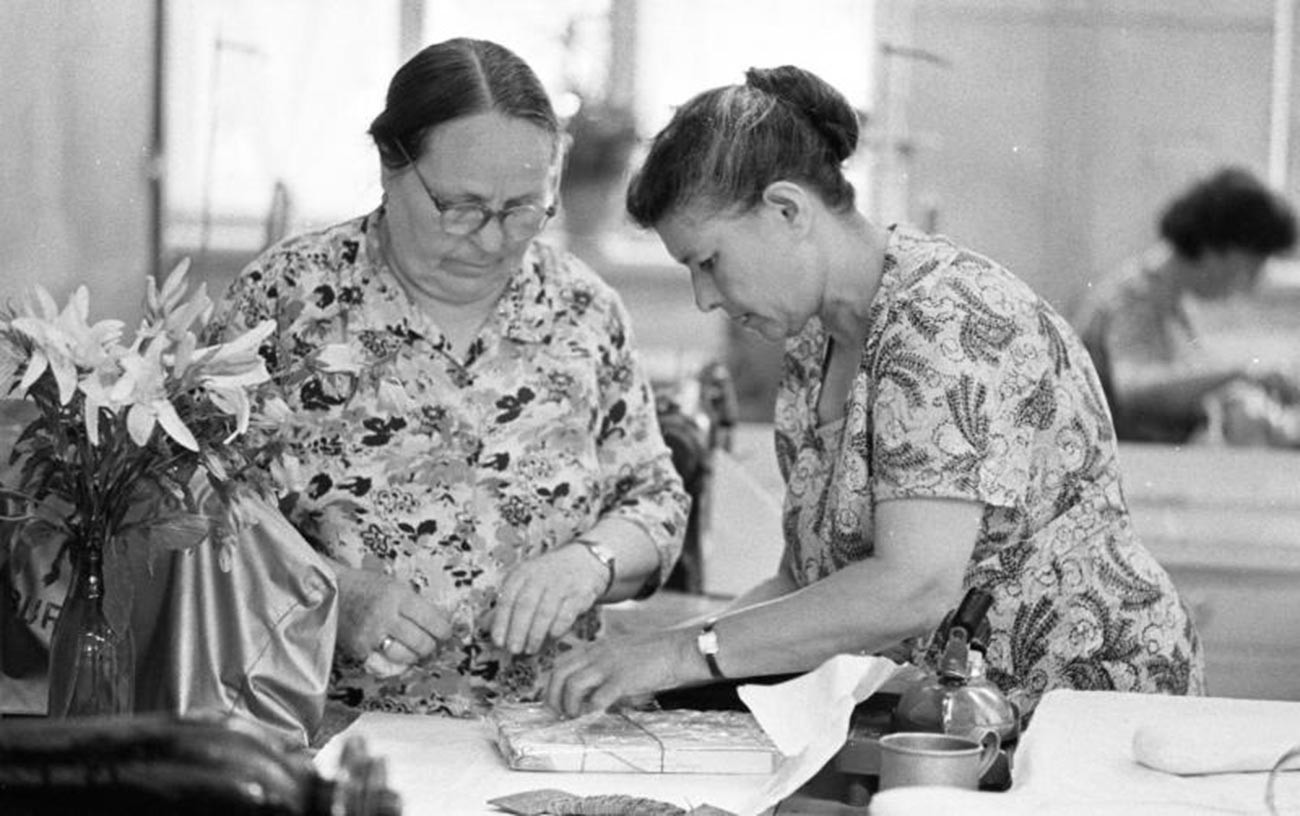 Women packing a present in the paper.

Some Soviet men could afford to throw a bigger party. Soviet artist and actor Anatoli Yeliseyev took his friends out to Sanduny sauna on his birthday in 1971. 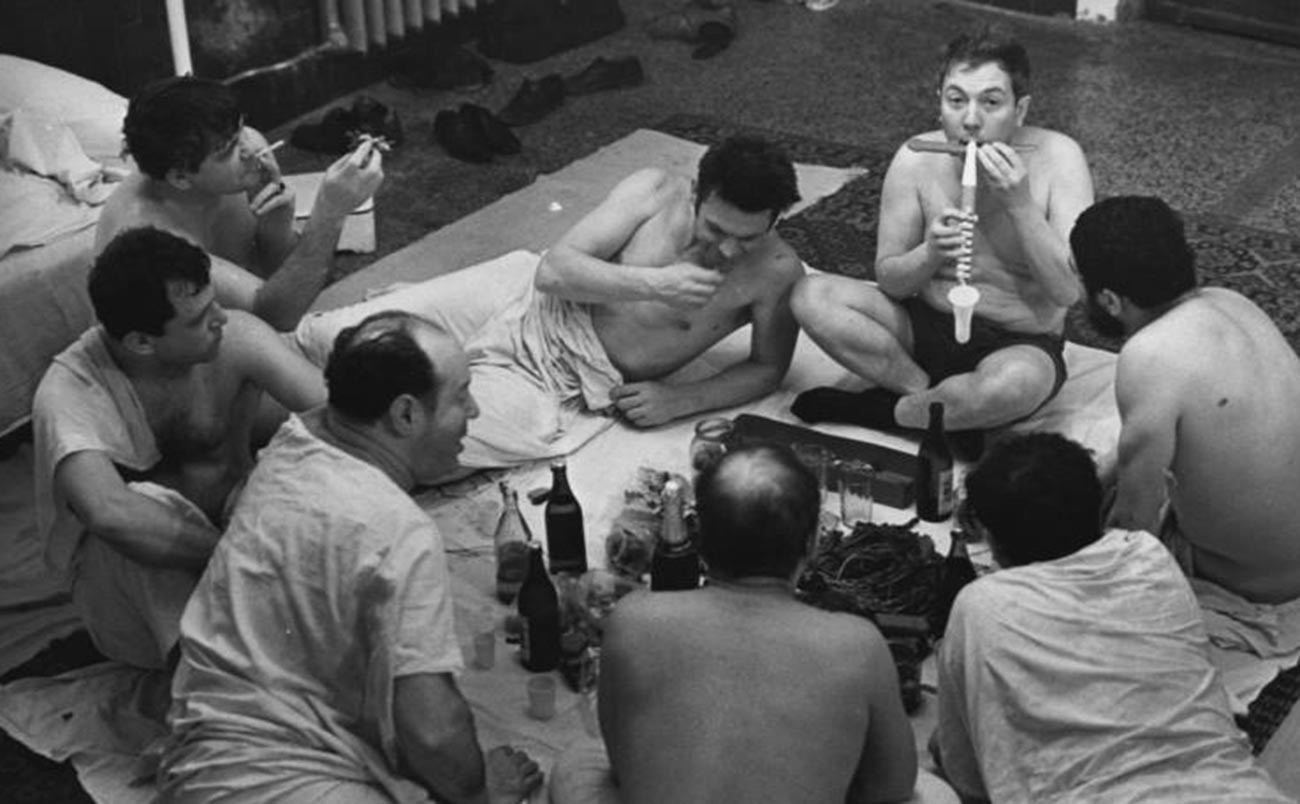 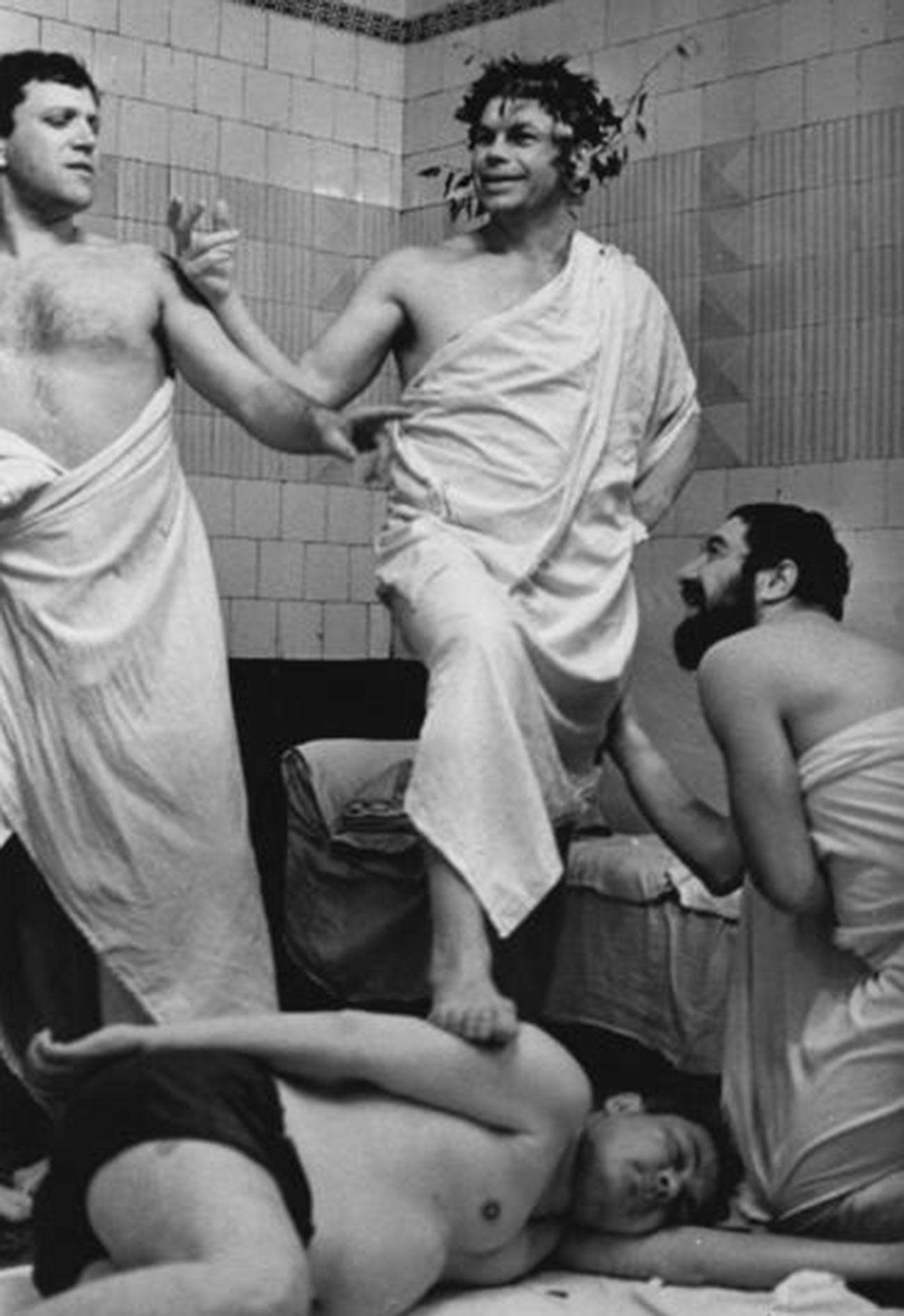 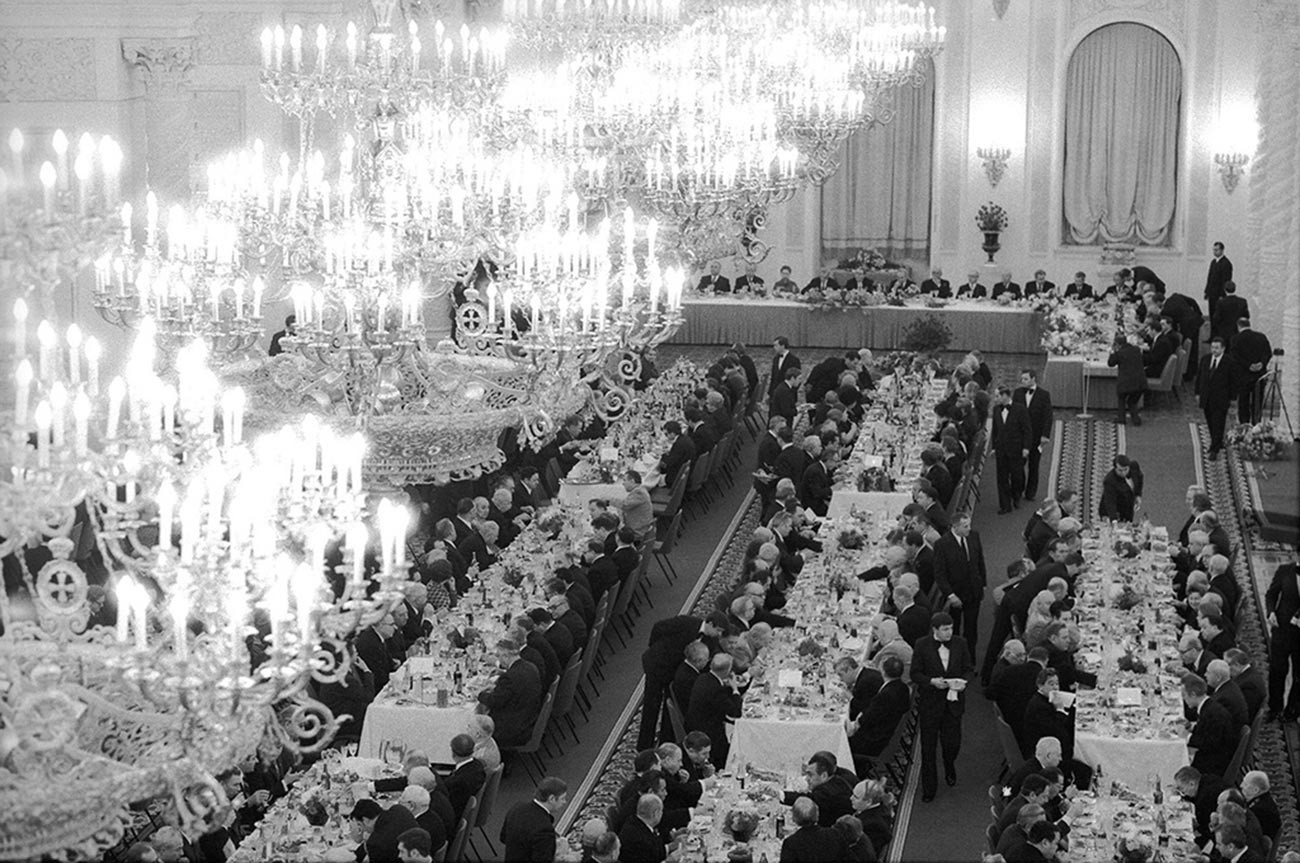 This is a photo of Leonid Brezhnev’s birthday party in 1977. The General Secretary of the USSR has turned 70 that year. 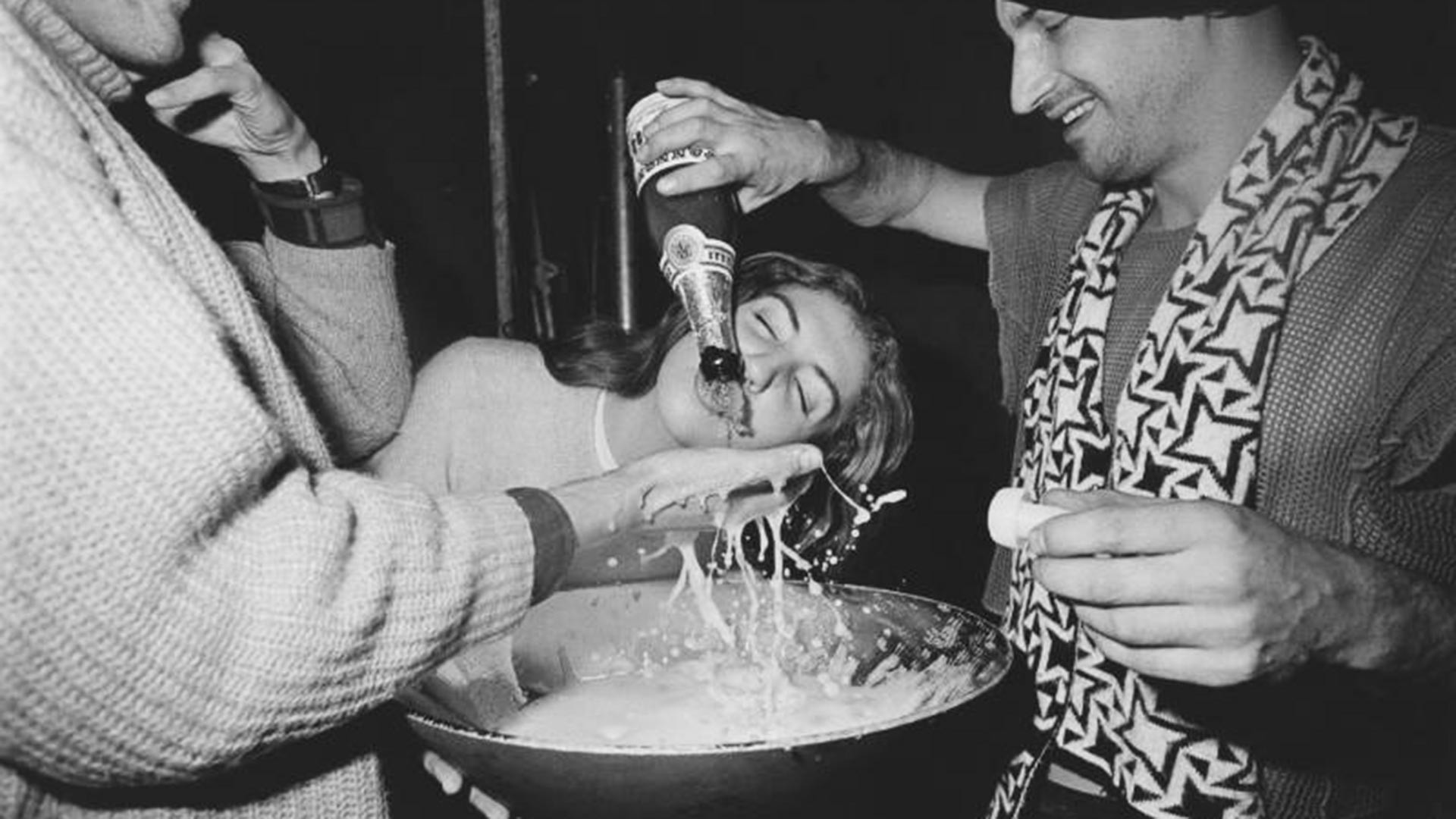 A photo of Soviet musician Herman Vinogradov’s birthday party in 1988.

Click here to see how New Year was celebrated in the USSR.