How New Year was celebrated in the USSR (PHOTOS)

History
Russia Beyond
While Catholics have always celebrated Christmas as probably the main holiday of the year, the red country didn’t recognize religious holidays, and made up its own, civil ones, instead.

Christmas is not celebrated on such a large scale in modern Russia as in other Christian countries. And the roots behind this can surely be found in the Soviet Union. In 1929, authorities banned all religious celebrations and for over 70 years Russia didn’t celebrate the birth of Jesus Christ at all. 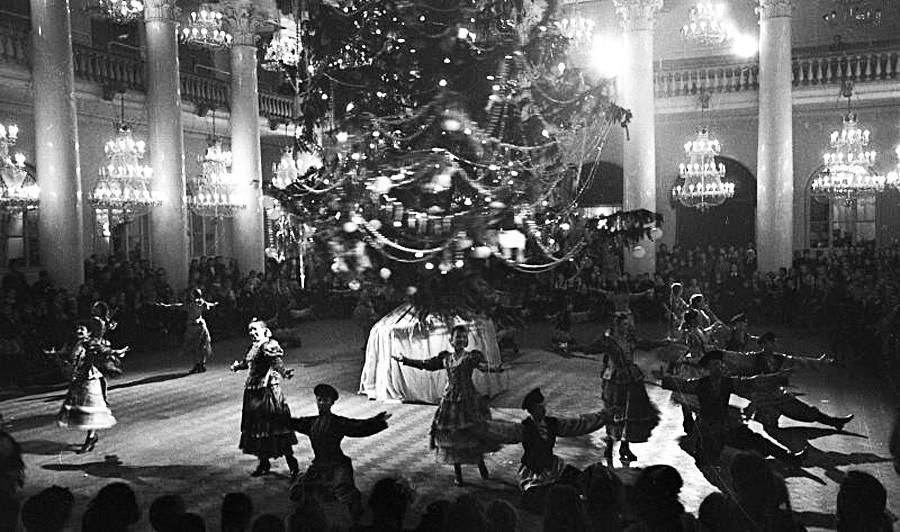 However, people were used to the annual winter feasts - they needed joy and a break from the hard work and dark cold days - so the Communist Party decided to arrange a fir tree party for peasants and proletarians on New Year’s Eve. The first official one in 1935 was celebrated in the Moscow Council of Trade Unions (see the photo below)... 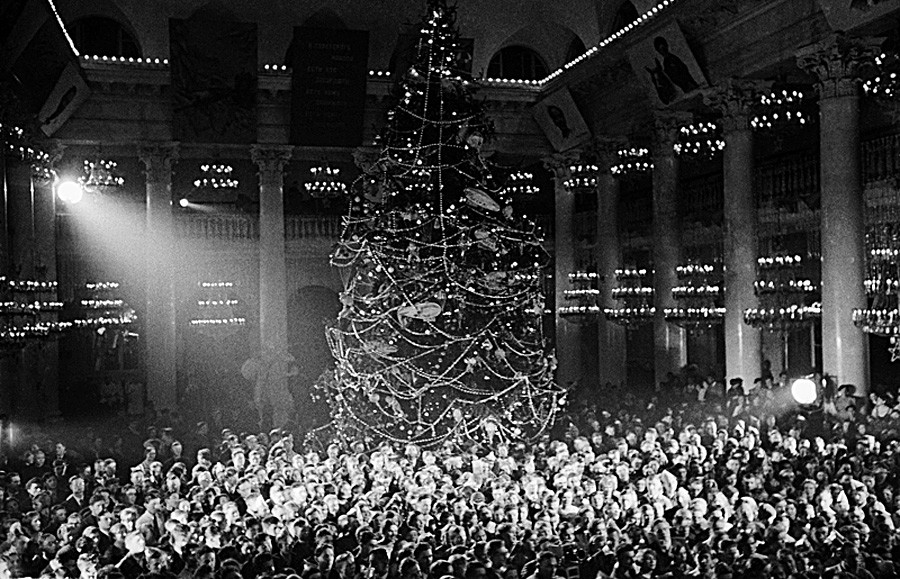 …as well as all across the Soviet Union - including regions where there was no Christmas due to different religious traditions - like Uzbekistan. Instead of celebrating the image of Christ, children would often thank Stalin for their “happy childhood” with banners. 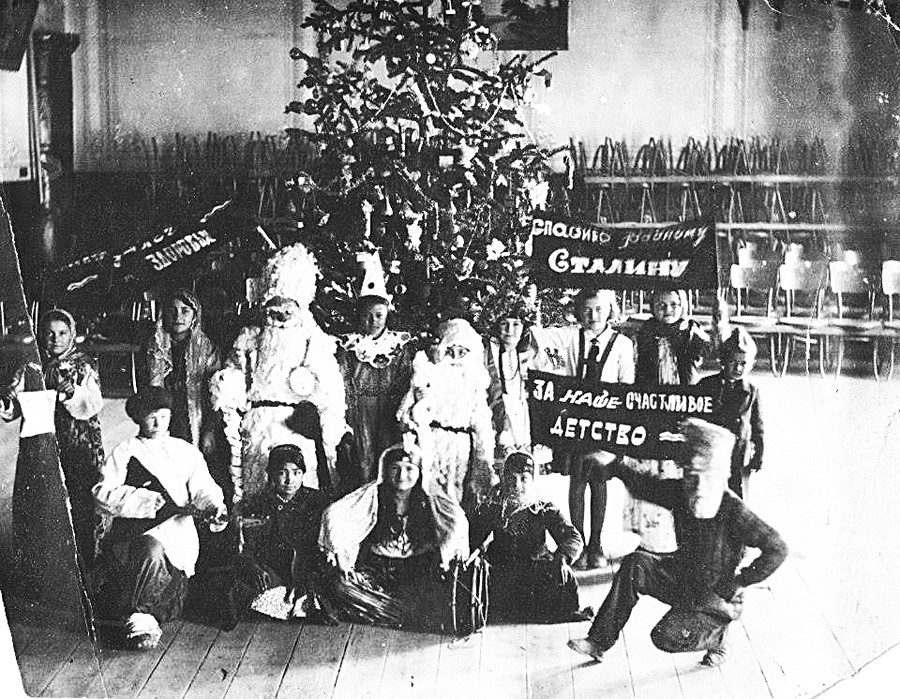 For many, New Year’s Eve remained a family holiday, just like Christmas, so gathering around the feast table with all relatives was a must on this day. 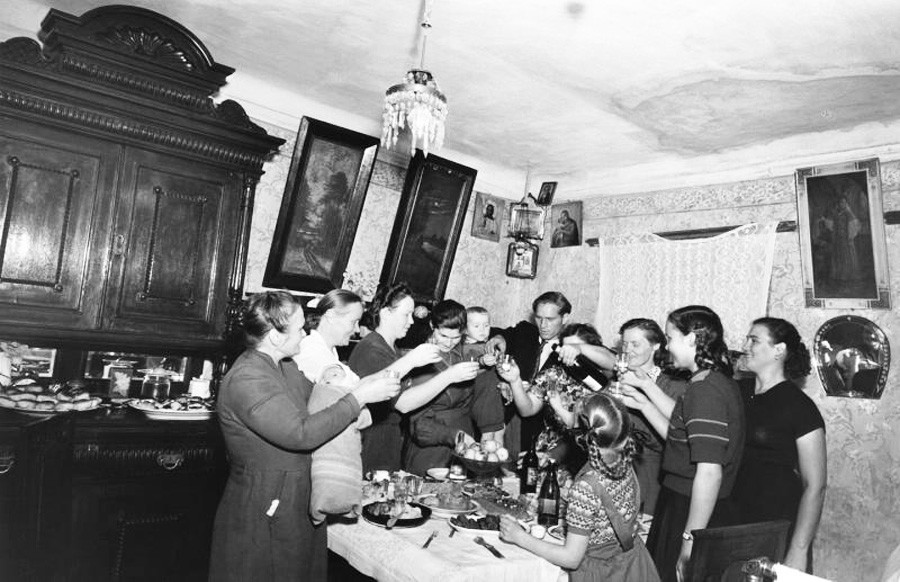 People used to procure the ‘best’ food they could find and try to get goods that were not readily available. But it was, of course, a great challenge to get all these ‘luxury items’, because nothing was readily available. Among the regular dishes one could find on a Soviet New Year table were: Olivier (“Russian”) salad, herring-under-fur-coat, kholodets and tangerines (because they were only available in winter). 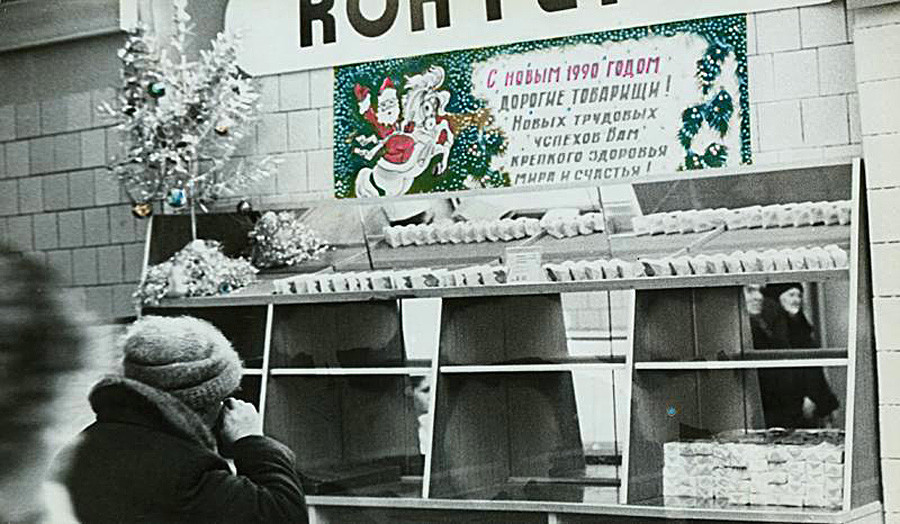 One of the most popular stores to buy fabulous New Year tree’s decorations was Detsky Mir - Children’s World - the central children's department store in Moscow. If you waited long enough in a long line, you could buy something really special (most purchased toys and decorations were then delicately saved and used for decades - even today!). 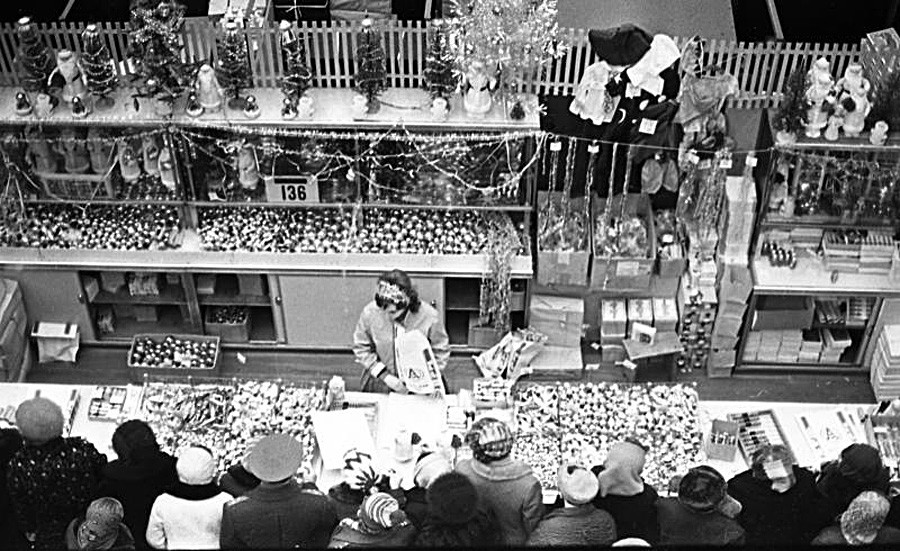 Most of the toys for the New Year were handmade. In schools there were labor lessons where kids prepared for the feast in advance. 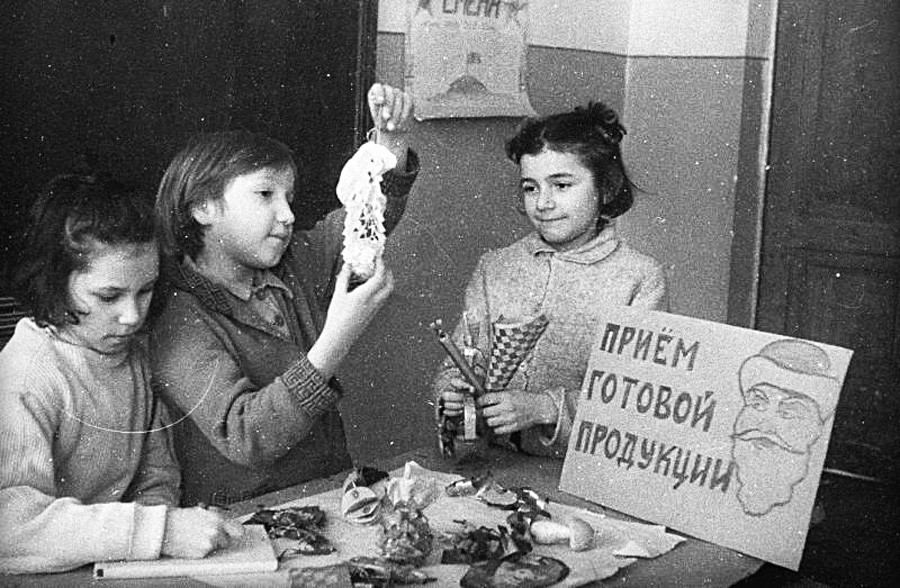 At the end of December, all kindergartens, schools, factories and companies would arrange a celebration and prepare amateur performances. Masquerades were among the favorite types of celebrations, where the costumes were also handmade. 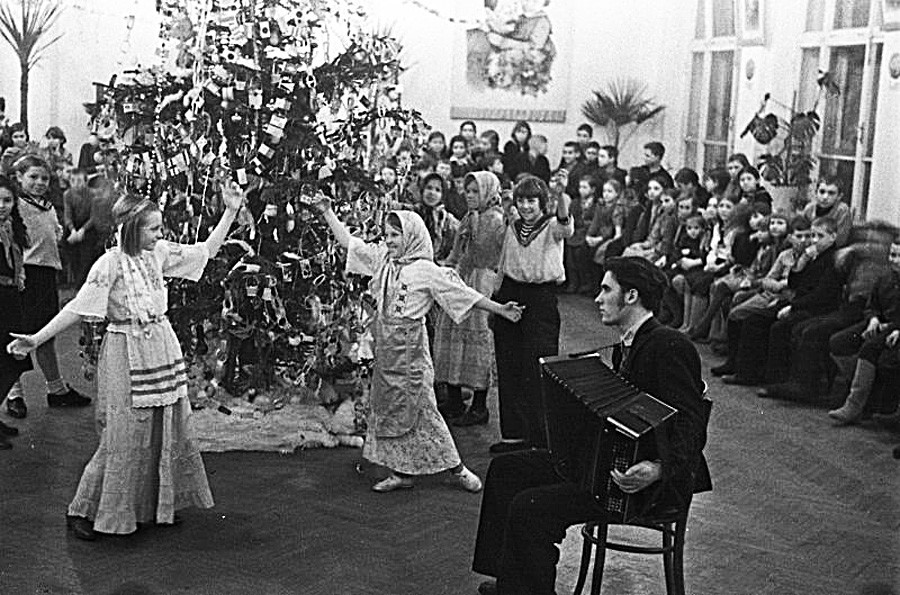 One of the main symbols was Father Frost (Ded Moroz), who is considered the Russian analogue of Santa Claus and was recognized since the 19th century. In the 1930s, the image of his granddaughter, Snegurochka (Snowmaiden) also became popular. Since then, they’ve ‘operated’ together to bring joy and gifts. 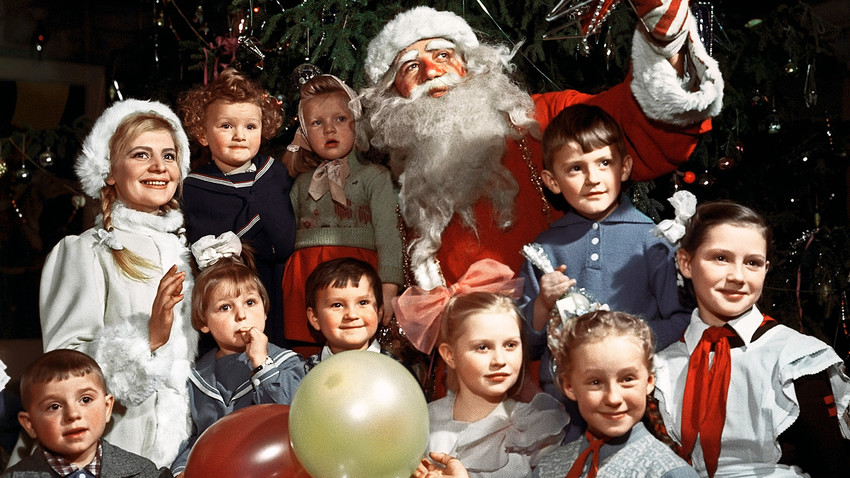 The country’s main fir tree was decorated on the Red Square, while the Kremlin arranged special receptions for kids and honorable workers… Here’s Nikita Khrushchev congratulating people in Kremlin. 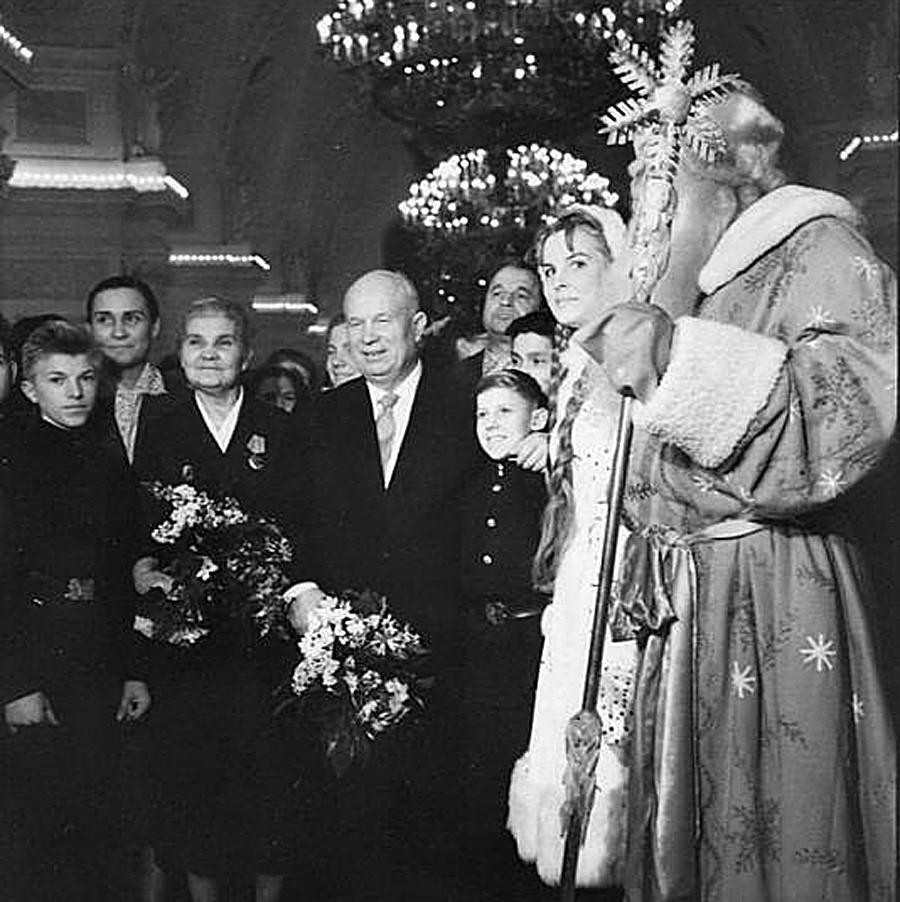 In modern Russia, there is a 7 to 10 day holiday period after the New Year, while in the Soviet Union, January 2 was already a working day. The photo below depicts a typical scene in what was the last Soviet New Year in 1990. 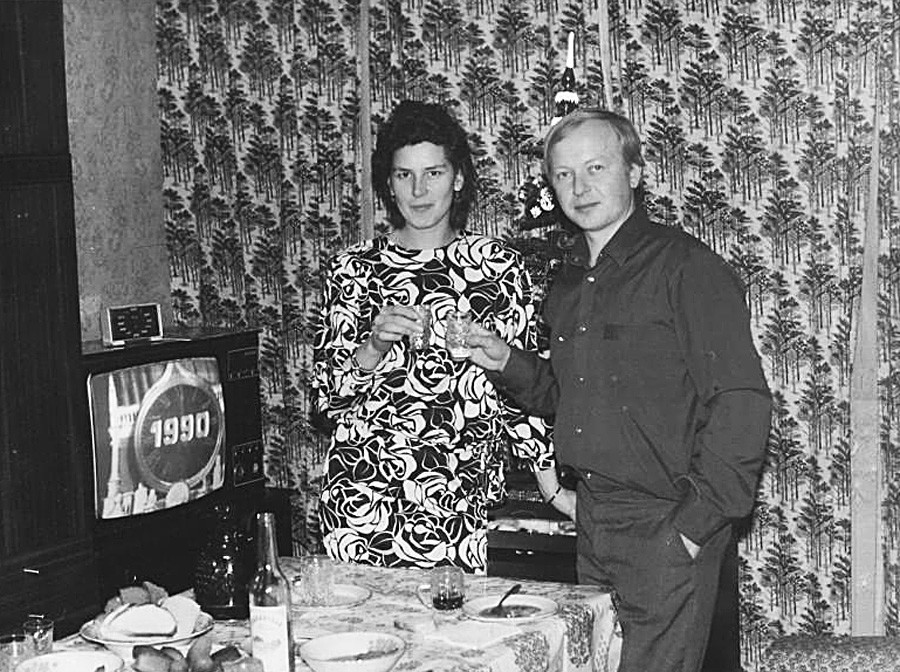