Maradona’s crazy trip to Moscow in 1990

History
Russia Beyond
Football legend Diego Maradona visited Moscow a number of times, but the craziest was his first trip, back in the USSR, which almost didn’t happen because famous Argentine missed his flight! 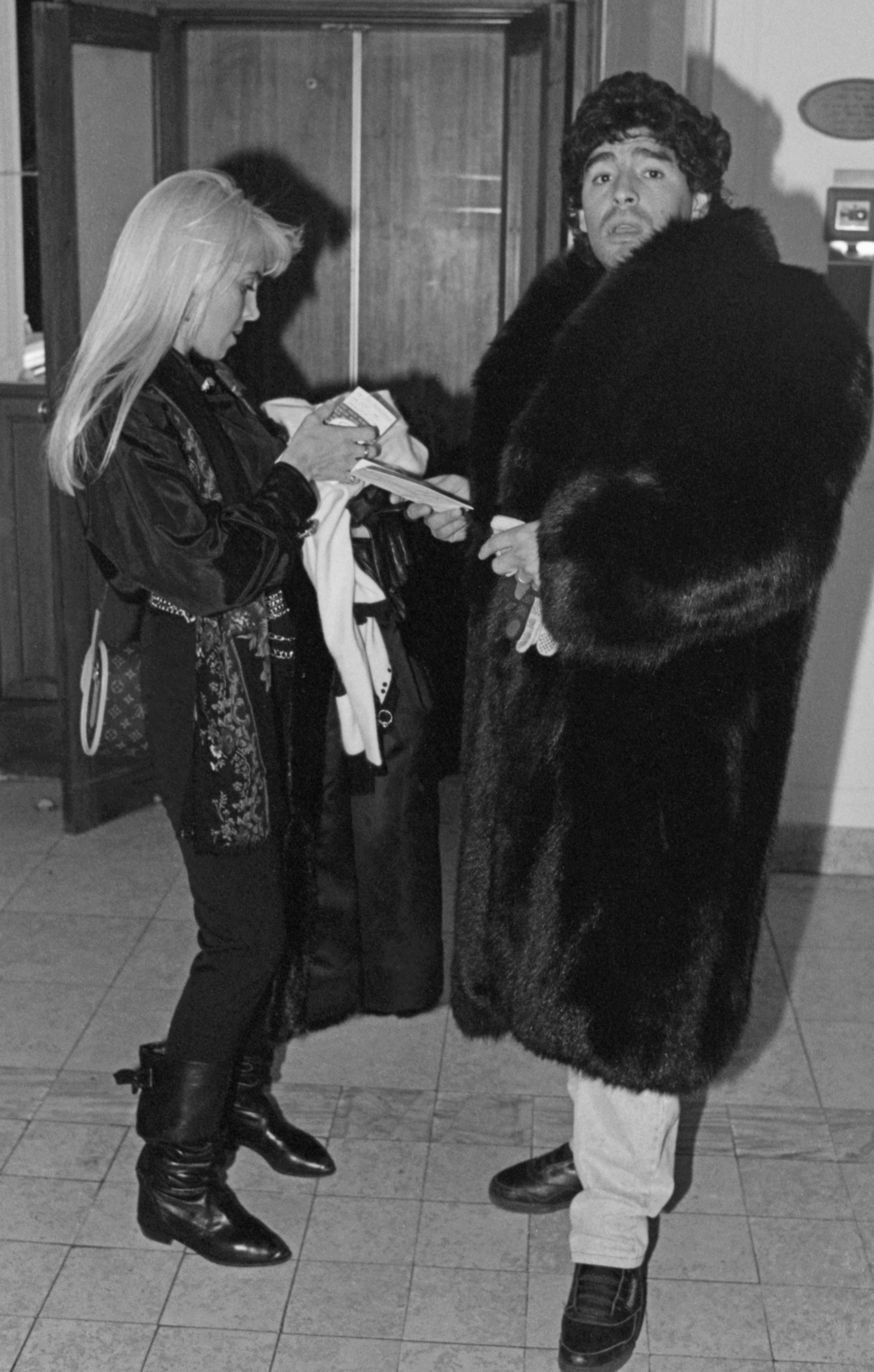 Maradona at the Berlin hotel.

November 1990. The Napoli football team arrived in Moscow for the eighth finals of the Champions Cup, hosted by Spartak Moscow FC. The most eagerly awaited was obviously the Argentine footballer, Diego Armando Maradona, who had given Napoli its second Scudetto in the previous season.

But Maradona did not get off the plane. Soviet reporters learned shortly afterwards that the champion had spent one of his famous excessive nights and had arrived late at the airport, missing his flight. The reaction was a mixture of relief for the Spartak team, who’s opponent was unexpectedly missing their most dangerous player, and regret that the Soviet players and fans could not meet the legend in person.

But after a few hours, another rumor spread: Diego Armando Maradona was flying to the Soviet Union in a private plane. And so it was.

When it became known that he was going to stay overnight with his wife Claudia Villafañe at the Hotel ‘Berlin’ (today known as the ‘Savoy’), a crowd of curious people met outside. There were only a few reporters and one photojournalist: Aleksandr Jakovlev from Tass news agency. He was the one who immortalized a really unusual photo of Maradona: wearing a long, thick fur coat. And dressed like that, the “pibe de oro” decided to take a tour of Moscow.

His plane had landed at 11:00 p.m. in the Soviet capital, 18 hours before the start of the match. At 40 minutes past midnight, he checked into the hotel and asked to be brought something for dinner. But it was not possible, because the kitchen had been closed for some time.

Maradona was very disappointed and to console him, they offered him an exclusive trip through the deserted streets of Moscow at night in a militia (that was the name of the police at the time) car. At 2:10 a.m. he went out, surrounded by admirers and smiling policemen and got into their car.

The next day was the anniversary of the October Revolution (November 7) and a grand parade would be held on the Red Square as usual. The policemen, with an unprecedented breach of protocols, also managed to take him for a drive on the closed square.

On that evening of November 7 at the Lenin Stadium (today known as the Luzhnikì Stadium) the match between Spartak and Napoli was to be held. Napoli’s coach Albertino Bigon was in a difficult position: play the champion or punish him for violating the rules of conduct? Even in the Spartak team there was confusion. Would Maradona play or not after what had happened?

Maradona, as a punishment, and since he hadn't been able to train with the team,  started the match on the bench as a substitute. He entered in the 65th minute of the second half to the joy of the more than one hundred thousand fans who had flocked to the Lenin Stadium, under the thick sleet of November.

He played well, and even had a couple of good attempts, but could not find the goal. At the final whistle, the match was still 0-0. And so it was after extra time. So the game went to penalties. Maradona did not miss his shot, but it was not sufficient to win against the Soviet team. 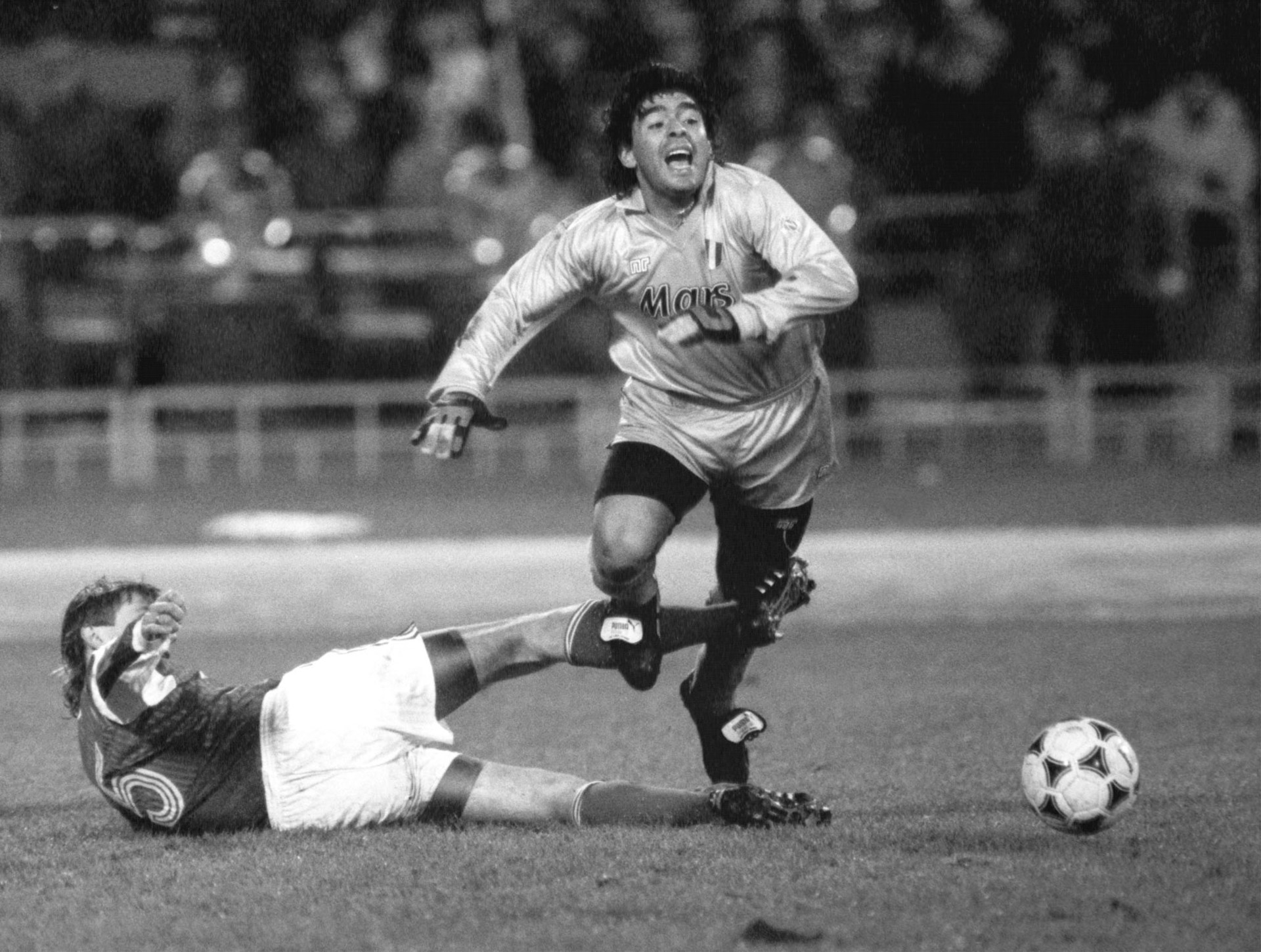 The photographer from TASS, who had photographed him at the ‘Berlin’ hotel, said that the one photo that he loved even more than the historical photos with Maradona in fur, was the one that he took that night of him on the field: the moment a precise tackle by Spartak defender Boris Pozdnyakov had stopped Maradona during a very dangerous attack.

That November evening, between interviews with Soviet journalists and gifts from Spartak’s opponents, who all stood in line in the locker room to shake his hand and give him tokens of appreciation, Maradona’s participation in the Champions Cup ended. 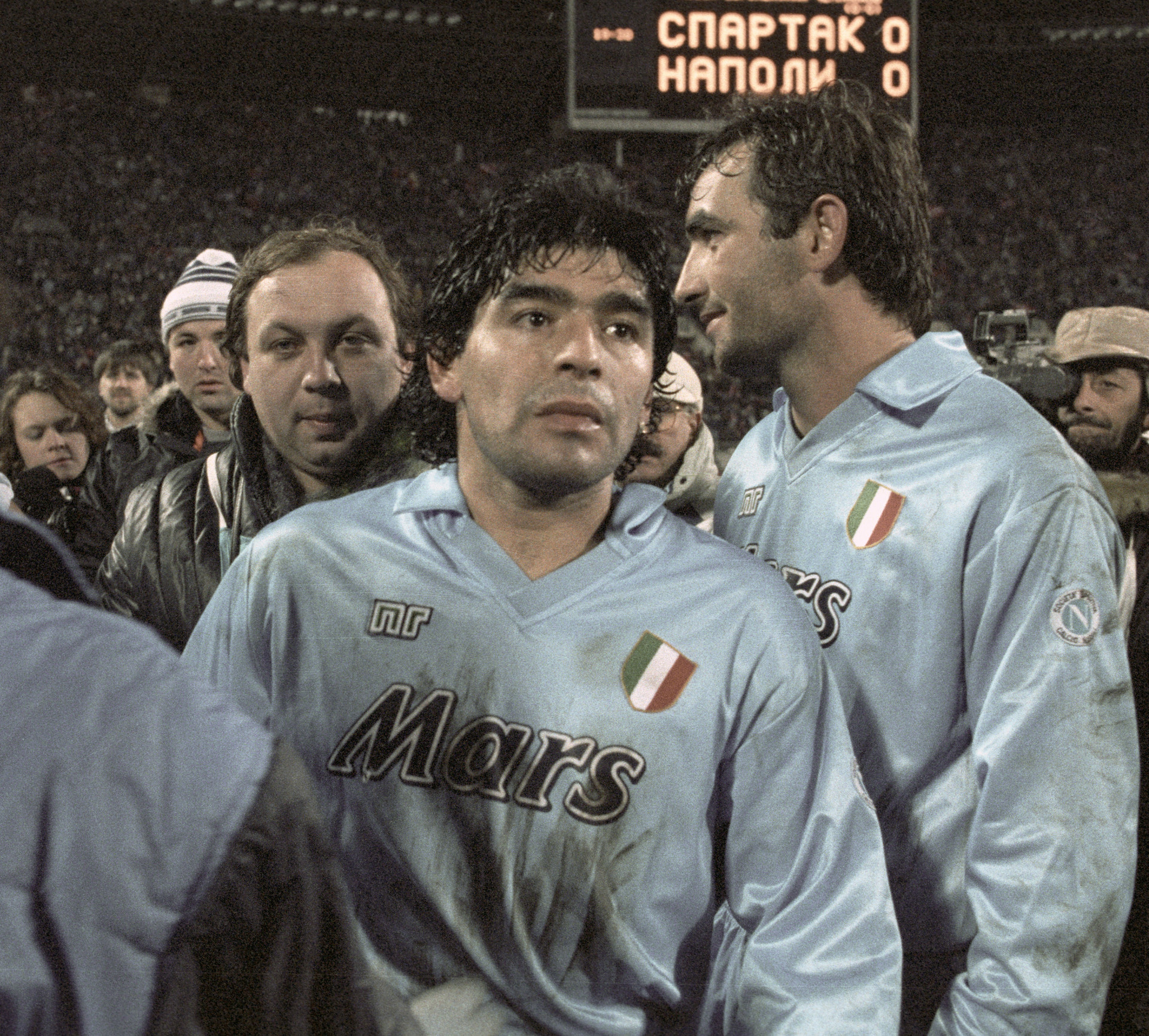 Shortly afterwards, in March 1991, after testing positive for cocaine and “escaping” from Naples, his time in Italy would also come to an end. He passed away in another November, exactly thirty years after that crazy trip to Moscow. But his story and his legend remain: that of one of the best footballers of all time; a footballer in fur on the deserted Red Square.