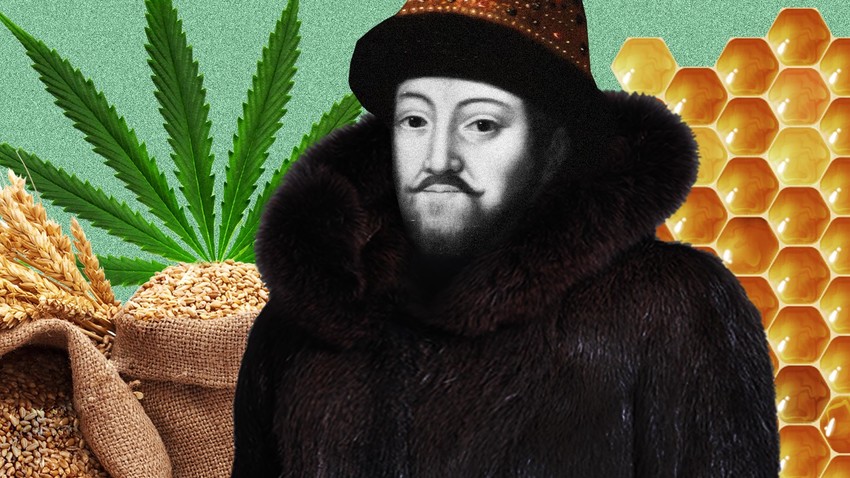 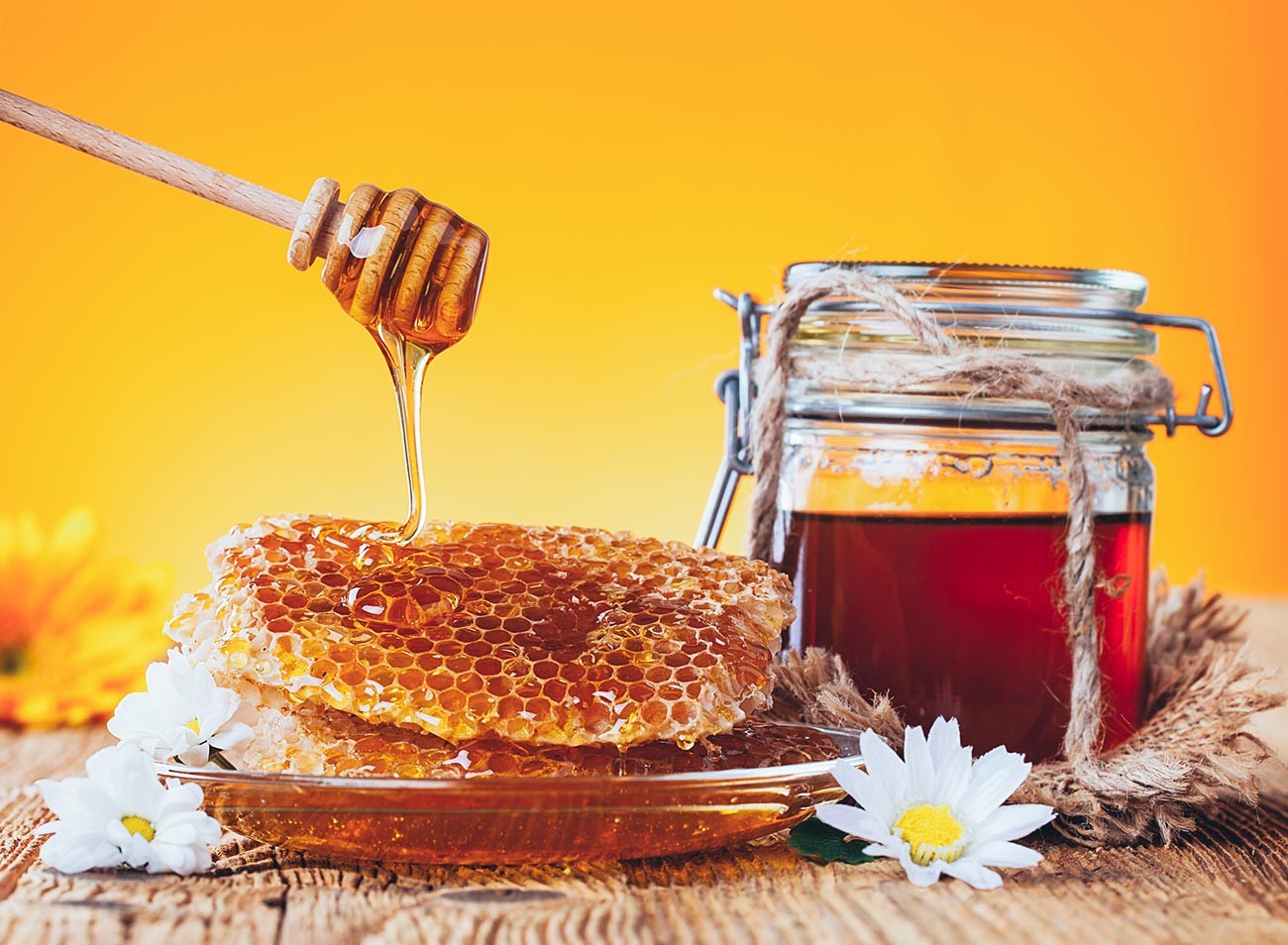 Greek hIstorian Polybius (2nd century BC) mentions that the Greeks exported "luxury goods: honey, wax, salted fish” from the northern Black Sea region - that is, from the Scythian lands - today Southern Russia and Ukraine. So honey and wax were the first “luxury” commodities Russian regions produced.

The best Russian bees were European (or German) dark bees, native to Russian forests and naturally able to stay inside a hive without moving for 5-6 months – the length of winter in Russia. The vast Russian forests held innumerable bees that produced tons of honey and wax. 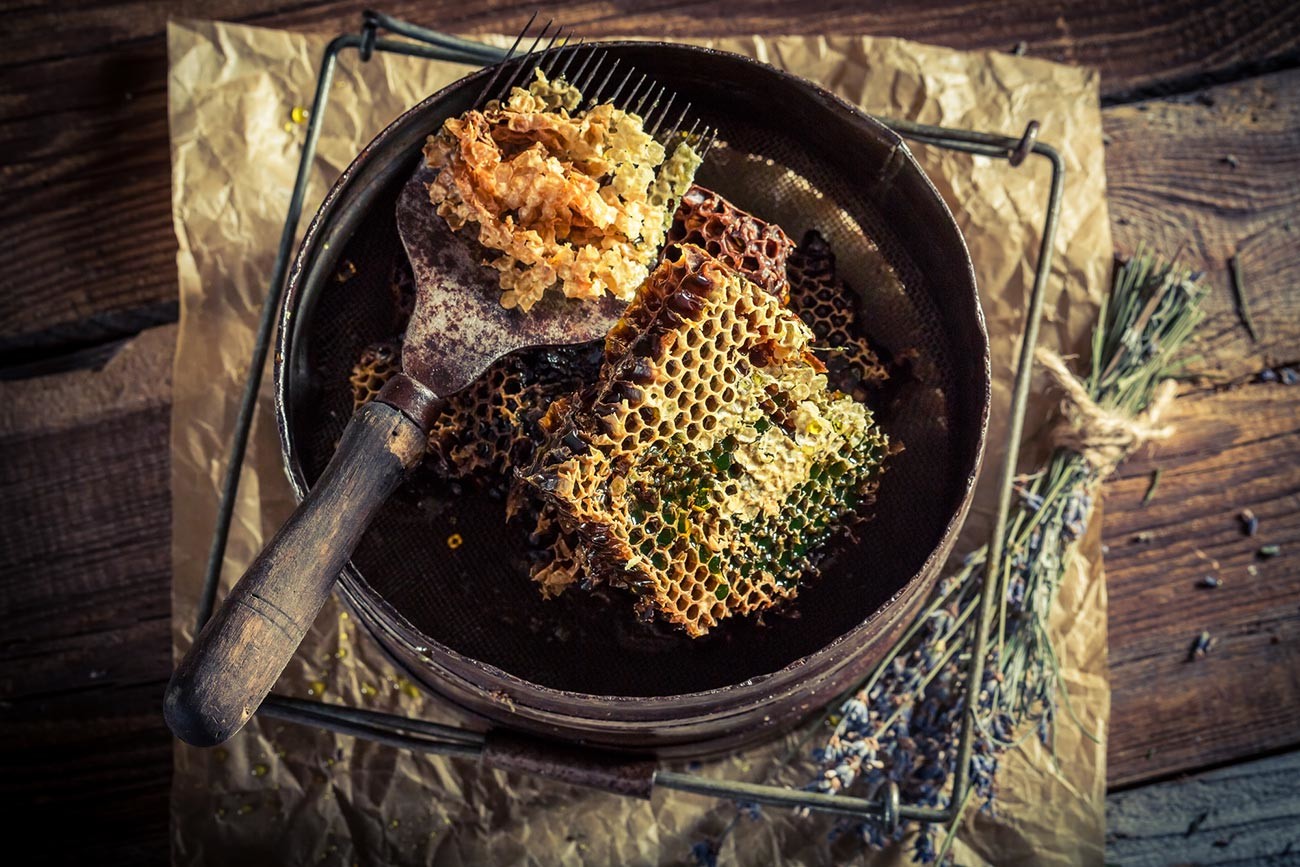 Historians say Russians produced millions of pounds of honey annually. Honey and wax were harvested from the hollows of trees. Russian diplomat Dmitry Gerasimov (1465-1536) amazed Europeans with tales about a peasant who climbed into a big hollow tree and sank neck-deep in honey.

What about the exact numbers? They are fragmentary, but impressive. In the 16th century, Trinity Lavra of the St Sergius Monastery alone possessed 1,500 trees, with one tree providing around three pounds of honey annually – totalling 73 tons of honey a year. In the 16th century, Russia exported 50,000 pounds (815 tons) of honey annually. Exports slowly declined until the 19th century, when wooden beehives became widespread, and honey production no longer depended on forest harvesting. 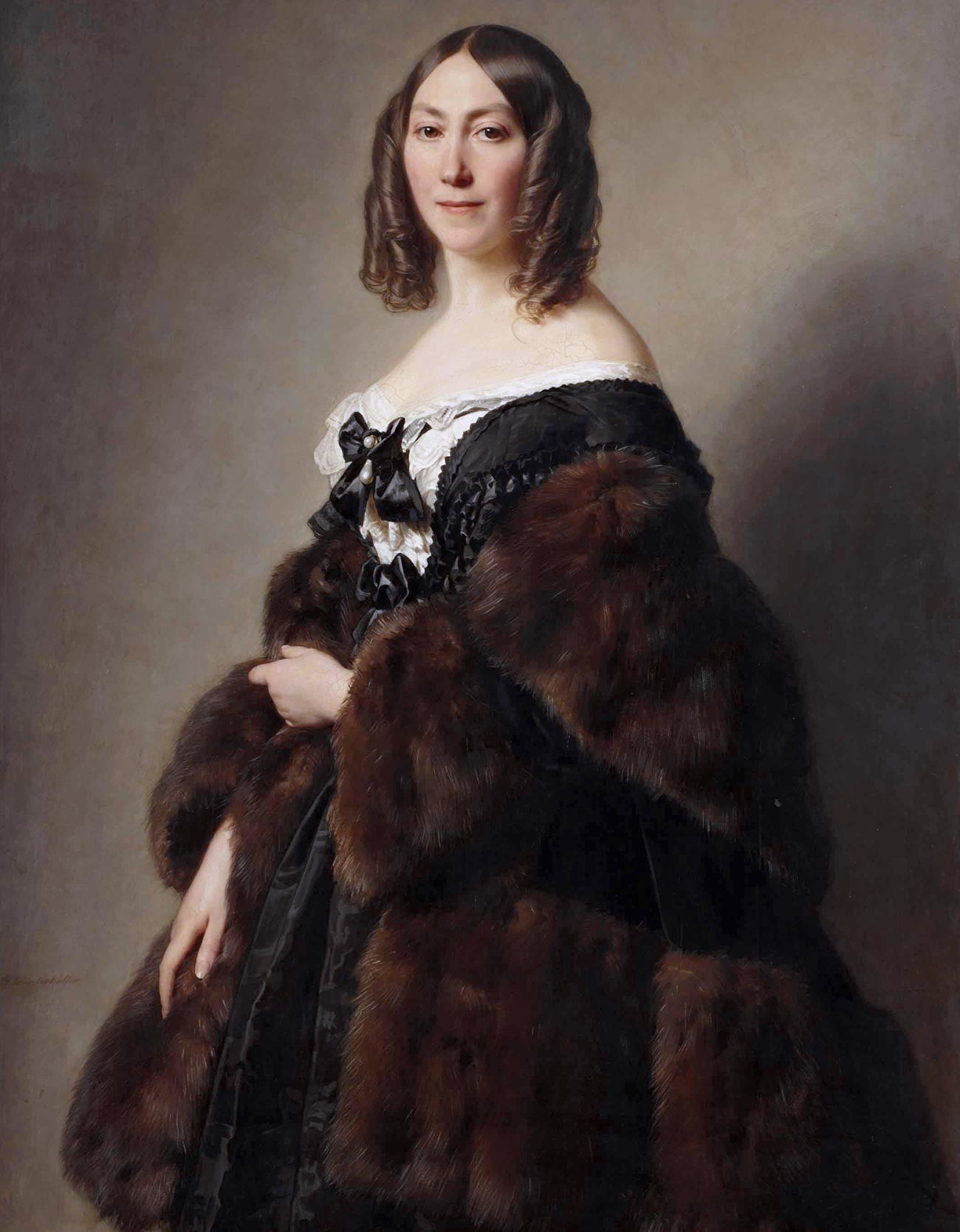 While honey exports deteriorated, other Russian commodities entered international trade. With the conquest of Siberia, new territories became available for sable hunting. The northern Siberian sable was much more expensive than that hunted west of the Ural Mountains, in Central Russia. In the 16th century, a sable skin was worth a ruble - the same as, for example, a cow. The skin of a black sable with grey stripes – 5 rubles. This was at a time when a horse cost two rubles. The skin of a silver fox – 8 or 10 rubles, equivalent to five horses. And to create a posh shuba (fur coat), one needed up to 30 silver foxes, the cost of a small village.

The demand for Siberian fur was huge in Europe and Asia, especially in China. In 1660, during the peak of the fur trade, Moscow earned 660,000 rubles for sable and other expensive furs – equal to half the country’s budget at the time. Not only sables and silver foxes were hunted and traded, but also squirrels, martens, and, later in the 18th and 19th centuries – sea otters, hunted in the Pacific ocean and on the Alaskan shores. In the mid 19th century, Russian fur exports ceased because the source animals had been all but hunted to extinction. At this time Russian grain exports were becoming more significant. 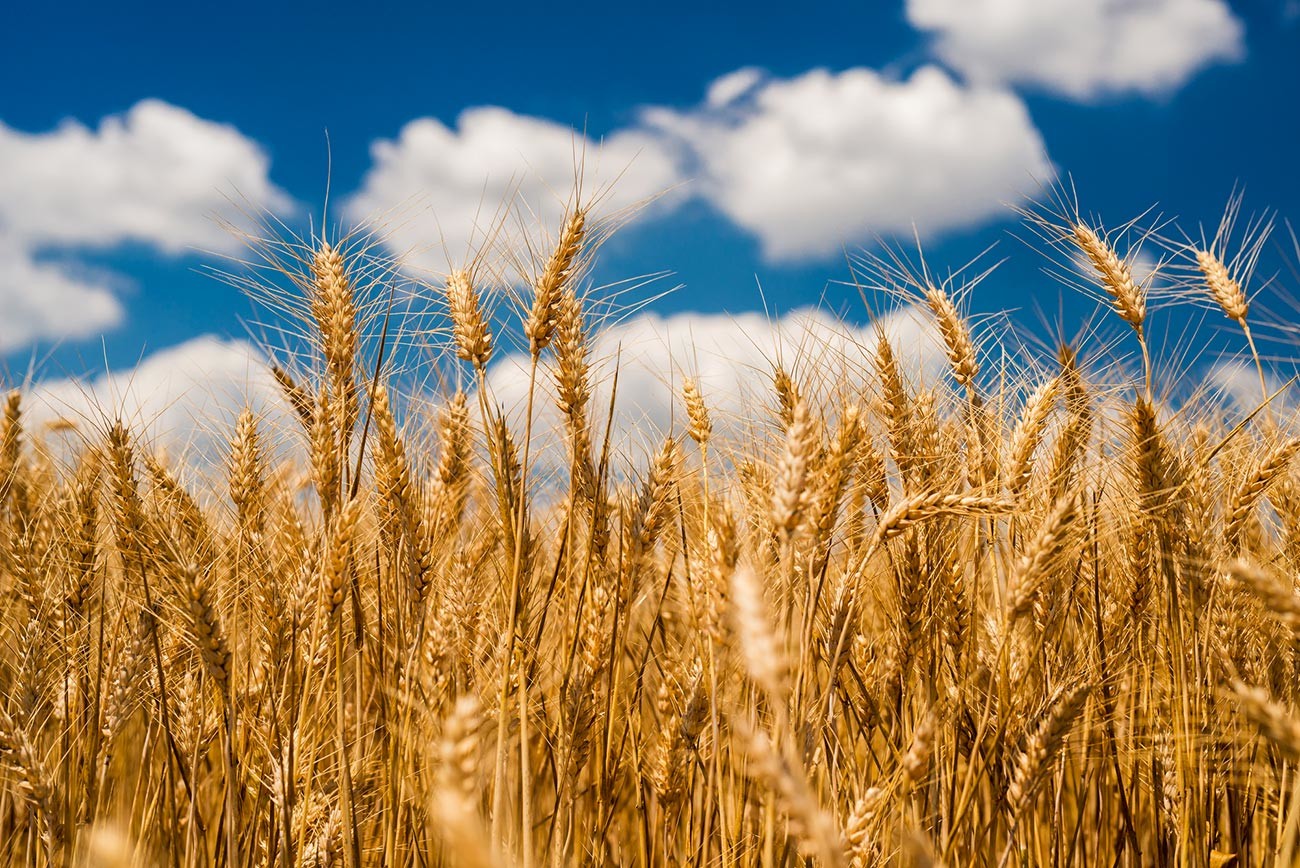 Russia traditionally produced grain because the steppes of the Northern Black Sea region had the best conditions for growing and harvesting cereals. As Russian territory grew, peasants learned to harvest grain on northern soils. But until the Russian lands were united in the 15th century and constant civil wars and conquests by nomads ceased, no regular, predictable production was possible, and no mass exports were available until the 19th century.

The main reason grain exports boomed after the mid 1800s was the introduction of railroads to Russia. Rail replaced horse transport - and because horses needed hay, much land was given over to growing forage for the animals. With the introduction of rail, these lands were freed to grow wheat. Also, before rail, public transportation was mainly carried out by coach drivers, so horses were mainly used on the roads. After Russia’s rail network was established, peasants started to use horses more as draught animals, for ploughing, and, importantly, using their manure to fertilize their soils – all this contributed to increased grain production. Also, railroads put the transportation of grain on a whole new level.

The share of grain exports in the total volume of exported goods increased from 30% in the early 1860s to 47% at the end of the 19th century. In 1914, the Russian Empire harvested 92.5 million tons of grain, 10.6m of which was exported, making Russian the world leader in grain exports.

Hemp (industrial cannabis, used for the production of sails and naval rigging) was one of the main Russian export commodities during the 18th and 19th centuries. Its production boomed in Russia in the early 18th century, when Peter the Great stimulated the development of the Russian fleet. The fleet needed sails and rigging, so on December 13th, 1715, Peter issued an order “On the expansion of flax and hemp crops” that demanded flax and hemp crops be grown “in all governorates,” and peasants be taught to grow and harvest them.

In 1715, thanks to Peter’s clever price policy, Great Britain started importing hemp from Russia. Until the end of the 18th century, Russia was the sole exporter of hemp to Great Britain (96% of British rigging was made of Russian hemp). At the end of the 18th century, hemp accounted for 40% of all Russian exports. In the beginning of the 19th century, jute began to be used in Europe for the production of naval rigging. Russia continued hemp production – by the end of the 19th century, Russia produced 140,000 tons of hemp (40% of all hemp produced in Europe). But the introduction of steamer ships, and the use of metal rigging for sailing ships reduced the demand for hemp, and by the early 20th century, exports had sharply declined. 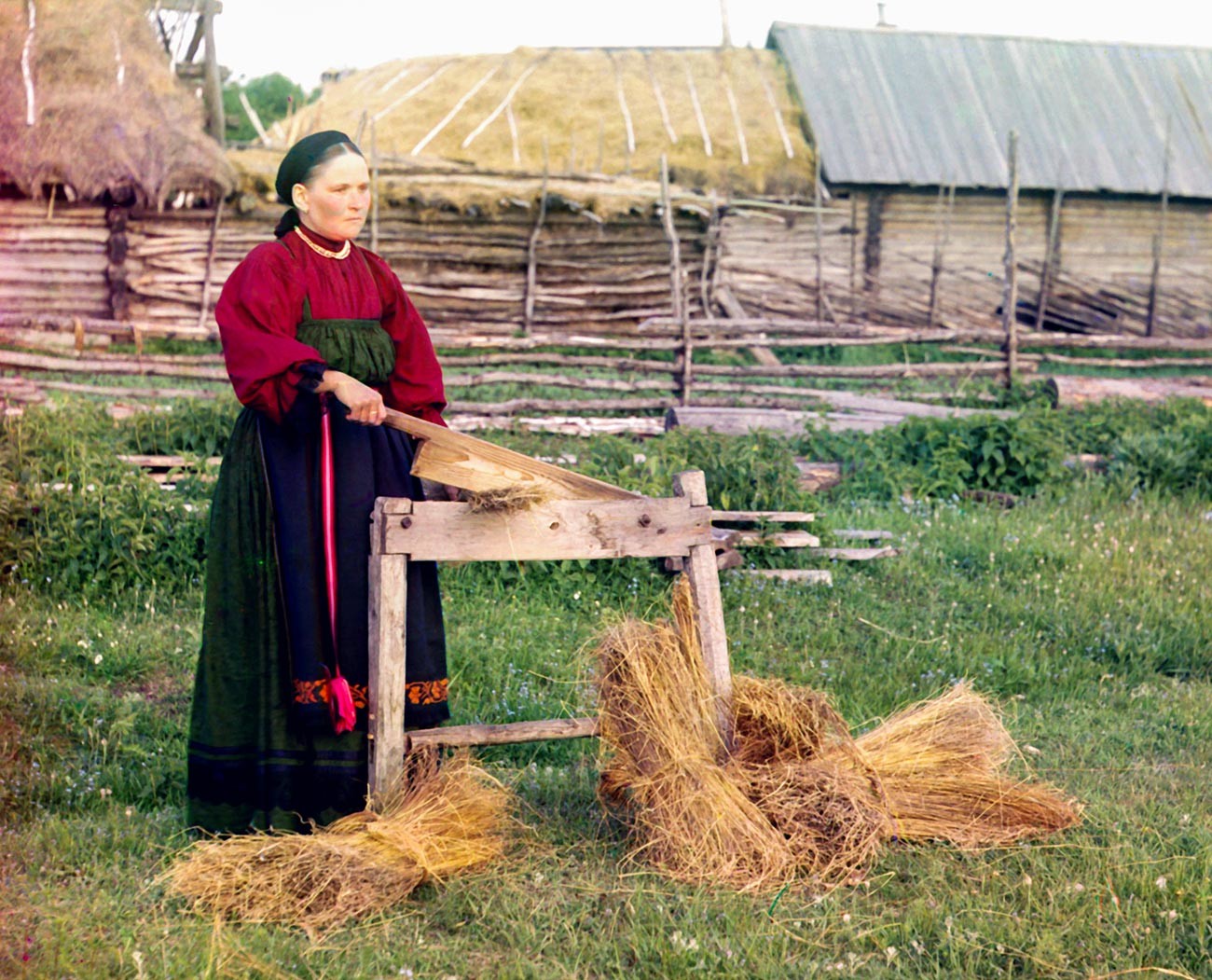 Of course, flax fiber was traditionally exported from Russia. The first mentions of its production and export date back to the 11th century. Novgorod and Pskov traded linen goods and raw flax fiber to Europe.

Flax (linen) production was boosted in Russia thanks to the 1715 decree. At first, only linen goods were exported, but by the mid 18th century, production volumes allowed linen seed trading to begin – in 1764, a ban was lifted on selling linen seed abroad for seeding and linen oil production. Linen production boomed in the 19th century. Thanks to industrial development 1830-1840, Russia became Europe’s leading linen producer: of the total 347,000 tons of linen produced in Europe, 196,000 tons came from Russia.