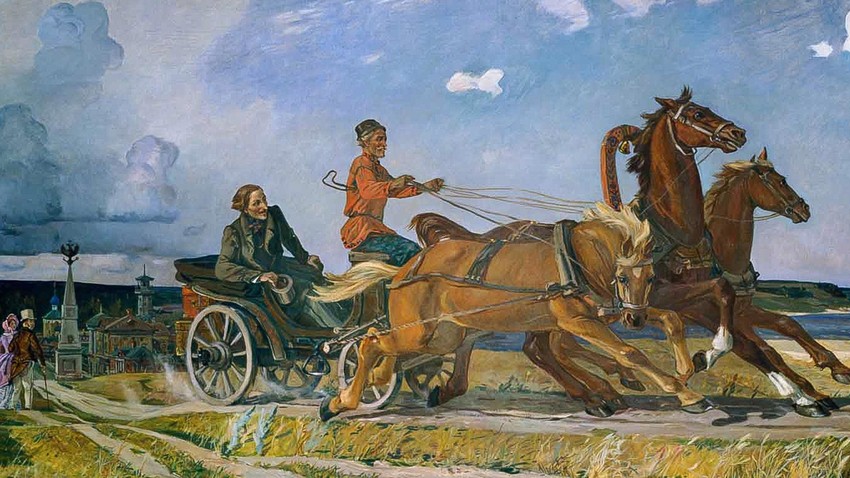 Aleksandr Deyneka
Coach drivers made up a special caste in Russian society. Their skills were passed down through the generations, their families were headed by women, and, of course, they were the fastest drivers in the country.

Arriving in Russia in 1839 from France, the Marquis Astolphe de Custine was shocked by the extraordinary speed at which Russian coach drivers raced along the Moscow-Petersburg Highway, the first high-speed road of the Russian Empire. “I had to quickly learn the Russian word for ‘slower’; but other travelers just urged the coachmen on,” wrote de Custine.

“The Russian coachman, dressed in a thick caftan, [...] seems Oriental at first glance; there is something Asian about how agile he leaps into the coach box. [...] The grace, lightness, speed, and sureness with which he drives the vehicle, the sprightliness of his slightest movements, the dexterity with which he jumps to the ground, the flexibility of his waist, his stature, and lastly his whole appearance, recall to mind the most graceful peoples on Earth,” wrote de Custine.

The coach drivers who so impressed this French visitor were indeed special people, a separate caste in society. Their profession was one of the oldest in the Russian state. 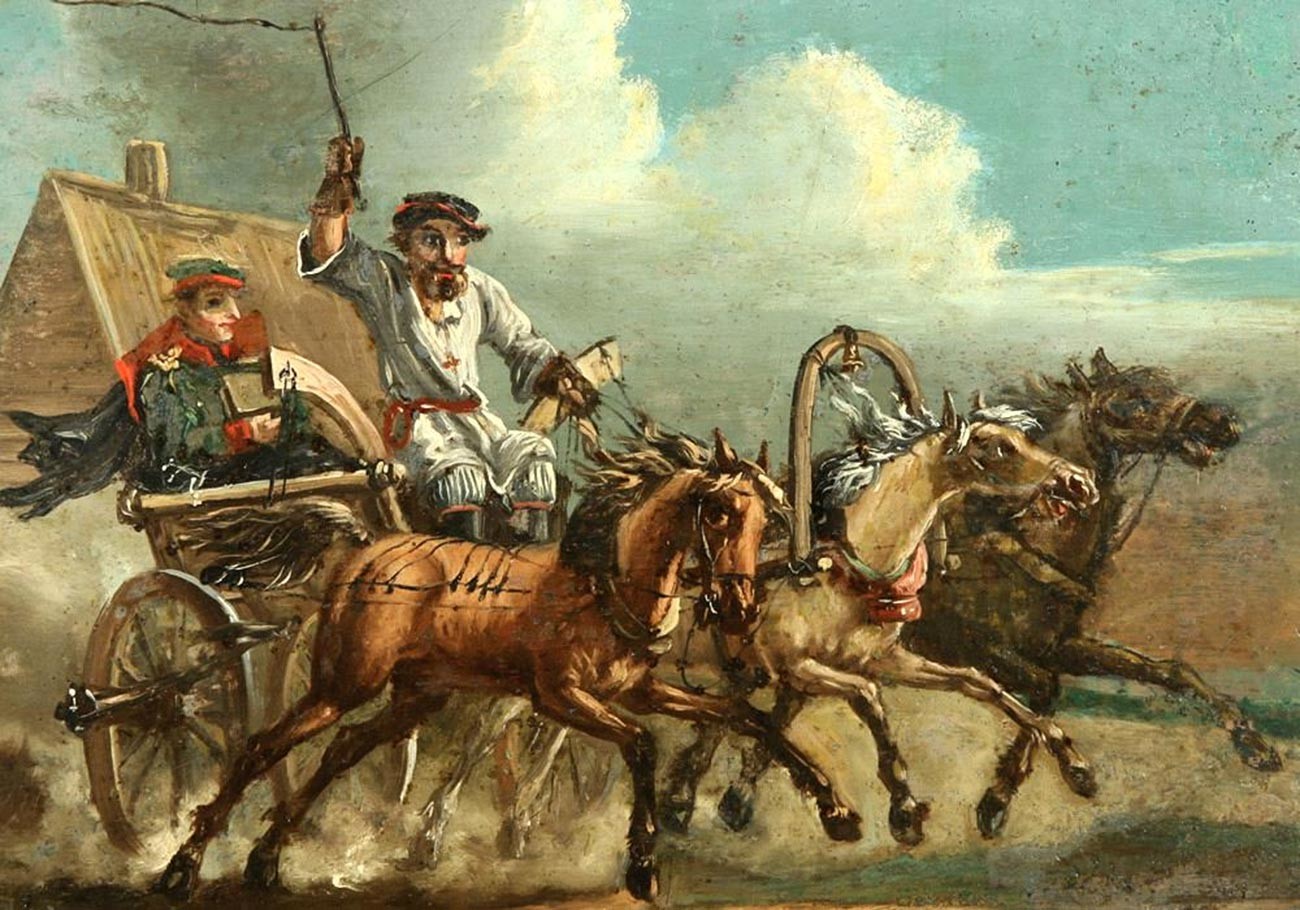 "The Emissary" (The Feldjäger), unknown painter

“When I served as a mail coach man...”, goes the first line of a popular old Russian song, one of many written about the profession. But why was such a seemingly menial job immortalized so?

The Russian word for “coachman” is yamschik — from the word yam. In the Mongol Empire of Genghis Khan, it referred to a building on a highway where horses were kept. The yam system, created either under Genghis Khan himself or one of his descendants, was the “killer app” that enabled the Mongols to build the largest contiguous empire in history.

The yam system connected the center of the Mongol Empire (and its Rus-based successor, the Golden Horde) with its outlying areas. So that emissaries could cover the vast distances as quickly as possible, stations were installed on roads at a set distance from each other. At the stations, messengers could rest, get a fresh horse and continue their journey. Despite the Golden Horde’s grip eventually weakening, the new Russian state preserved its way station system to facilitate communication between settlements.

“The great sovereign, the Prince of Muscovy, has coachmen with plentiful horses for emissaries across the whole principality,” wrote Austrian diplomat Baron Sigismund von Herberstein about the yam service of the 16th century. 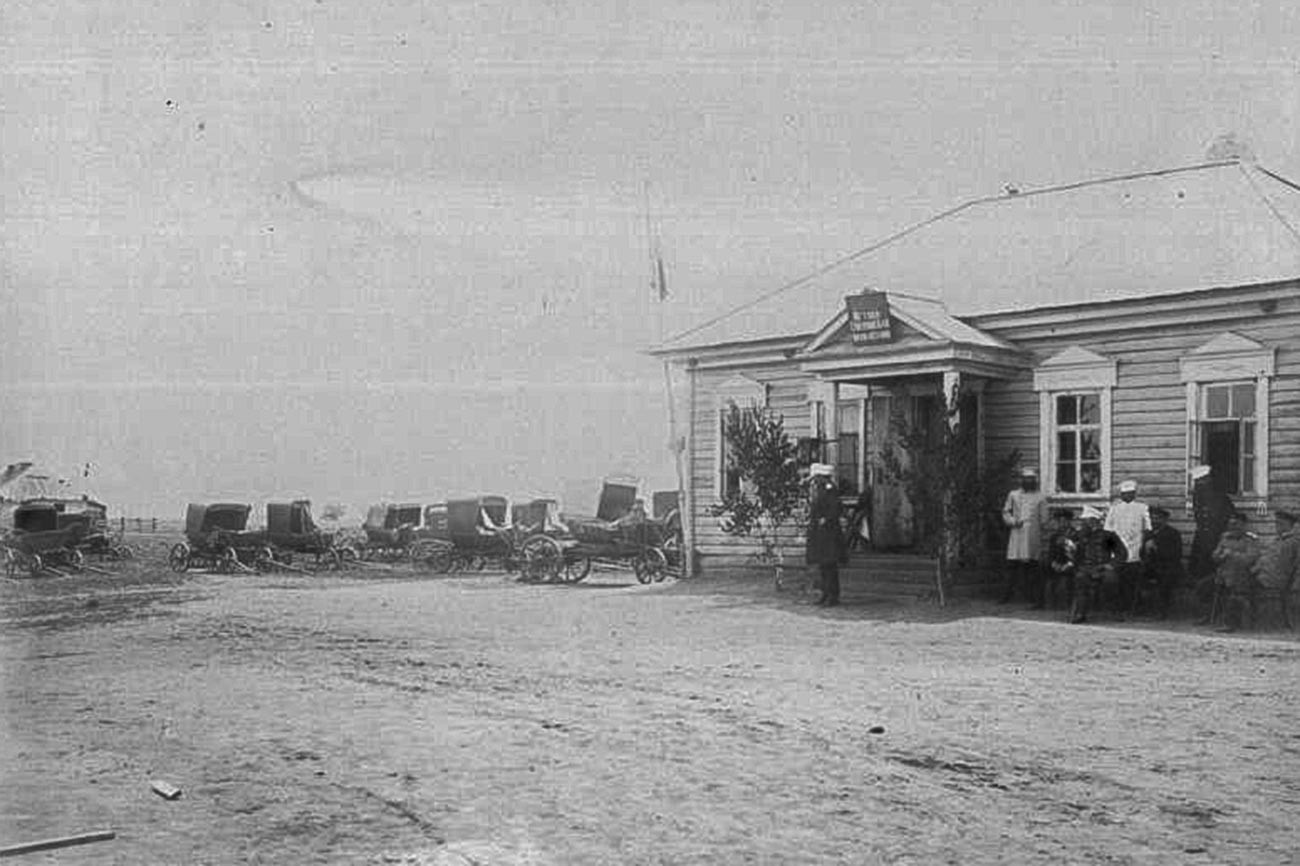 The coach stations were located at a distance of 40-60 kilometers apart (roughly the daily run of a horse). Their upkeep was provided by the local population, who paid a special “yam duty” introduced by the Mongol-Tatars (replaced by a general tax in the early 18th century). The population of the settlement was required to keep the roads and stations in good order, supply carts, horses and fodder, and select the most suitable candidates to work as stationmasters, as well as the actual drivers, whose task involved transporting government officials and cargo. A separate institution, the Yamskoy Prikaz, was set up to supervise the process.

There was no shortage of people who wanted to drive: coachmen and their families were exempt from state taxes, received land to build a house, and earned a wage. That said, the work was not easy — a driver needed strength and endurance, and had to be sober and dependable. On joining the service, he had to vow “never to get drunk, never to steal, never to run away, and never to abandon his reins in the wilderness.” The job was to convey travelers, dispatches and cargo, and each driver was required to maintain at least three horses in a healthy condition. 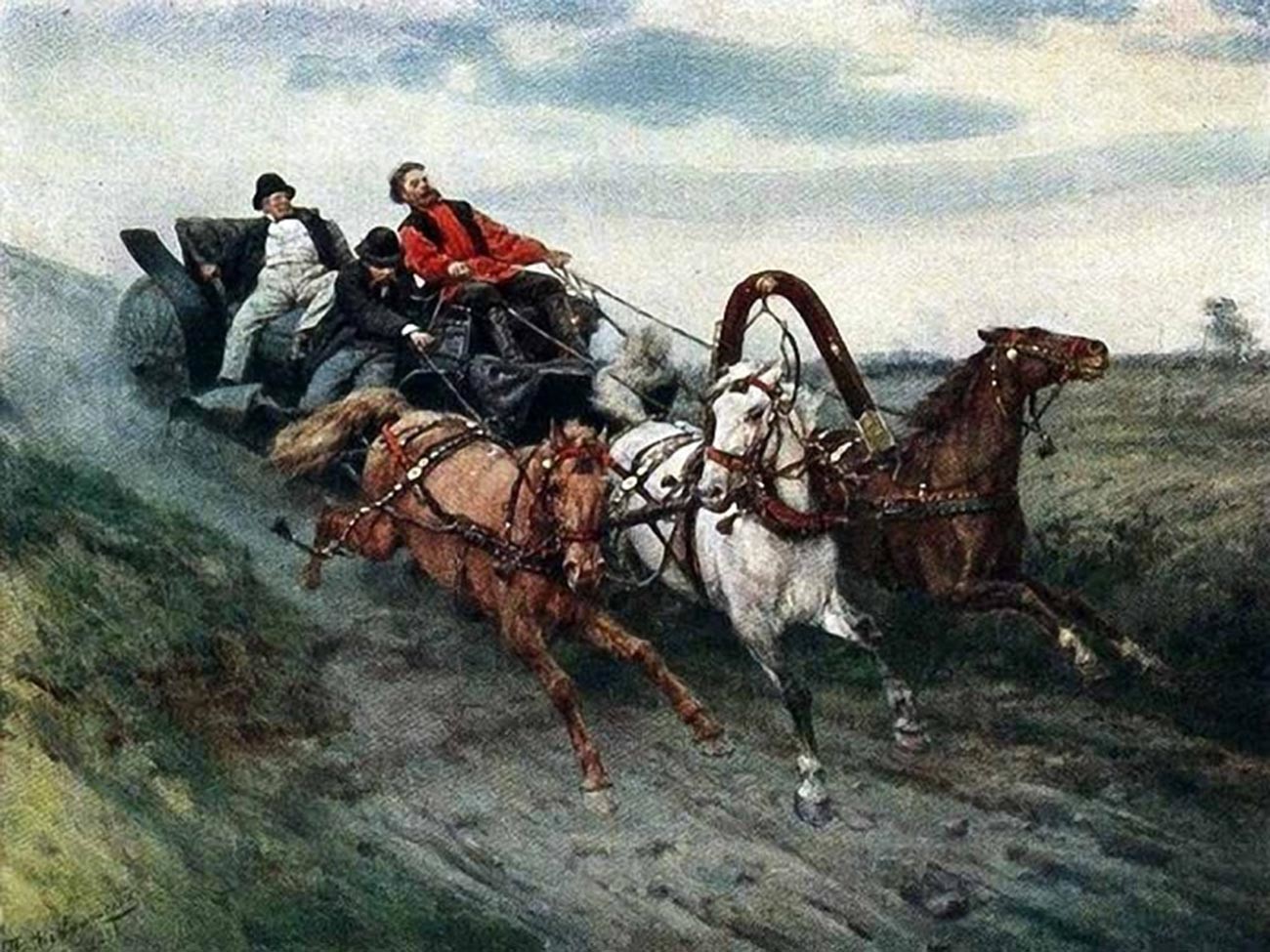 In 1693, Peter the Great issued an edict to set up a mail system linking Moscow to Pereslavl-Zalessky, Rostov, Yaroslavl, Vologda, and Vaga. It imposed strict requirements for drivers, especially with respect to the transportation of correspondence, which had to be carried “carefully, in bags, close to the bosom, so as not to be soaked in the rain or dropped on the road in a drunken state (the penalty for wet or lost mail is torture).” If the sealed wax on letters showed signs of violation, the driver could expect to be detained and delivered to Moscow for interrogation (which meant torture again). And for every hour of delay, drivers would receive one blow of the whip. The working conditions were not ideal, to put it mildly.

Therefore, coach drivers gradually came to form a separate caste — horse management and harnessing skills and other intricacies of service, including how to emit a trademark whistle to clear the road, were taught from an early age; they also lived apart in special areas. In both Moscow and Yaroslavl (another Russian city famous for its coach drivers), as well as other places, there was, and still is, a Yamskaya Street, where drivers lived, or even several streets of such name.

Traditions ran deep in coach-driver families. Until the late 19th century, the indisputable head of the family was the grandmother. Because the men spent most of their time on the road, the household was managed by the women. Coach drivers were religious, and showed particular veneration for Saints Florus and Laurus, who were considered the patron saints of horses. Moscow’s main equine market was located on Zatsepa Square, near today’s Paveletsky railway station, where the Church of Florus and Laurus still stands. 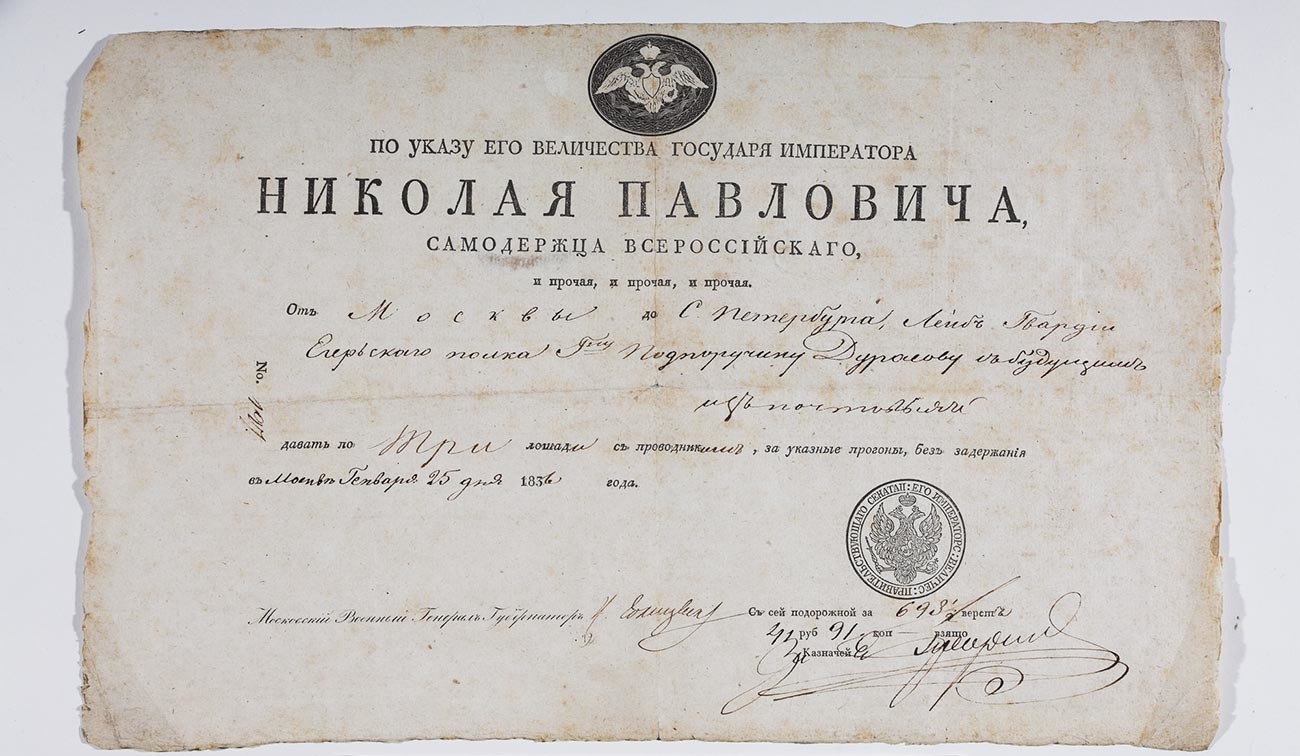 A podorozhnaya – document allowing to use the state-owned horses, dated 1836

State Museum of A. S. Pushkin

For ordinary travelers with sufficient money, it was possible to hire state horses provided by a post station. To do so, they had to obtain a podorozhnaya (a special document for the use of a state-owned horse and cart). Having presented it at the post station and paid the progony (money for a horse to travel a certain distance), the passenger was driven to the next station by a coachman, who then returned to his “base” station.

Of course, hiring either state or “independent” horses (that is, without a podorozhnaya, simply flagging down a coach driver) was very expensive. In her memoir, Nadezhda Durova wrote about her journey in 1836: “With a podorozhnaya, I would have paid no more than 300 rubles from Kazan to St Petersburg; without one, I would have spent exactly 600.” For comparison, Alexander Pushkin’s Mikhailovskoe estate brought in around 3,000 rubles a year, and his salary as a collegiate secretary (the equivalent of an army staff captain) in 1822 was 700 rubles a year; one ruble could buy more than three kilograms of beef, and a thoroughbred horse good enough for a rich nobleman cost 200 rubles.

In general, only the elite could afford coach rides. And for that kind of cash, drivers were prepared to race at breakneck speed. Jean-François Georgel, a French abbot, wrote in his Journey to Petersburg in the Reign of Emperor Paul I: “Russian coachmen hurtle along, the horses almost never stop galloping... they constantly risk breaking the carriage and capsizing, and you have to threaten them to make them go slower.” Experienced Russian travelers always carried spare axles and wheel rims in their luggage, knowing for sure that they would be needed. 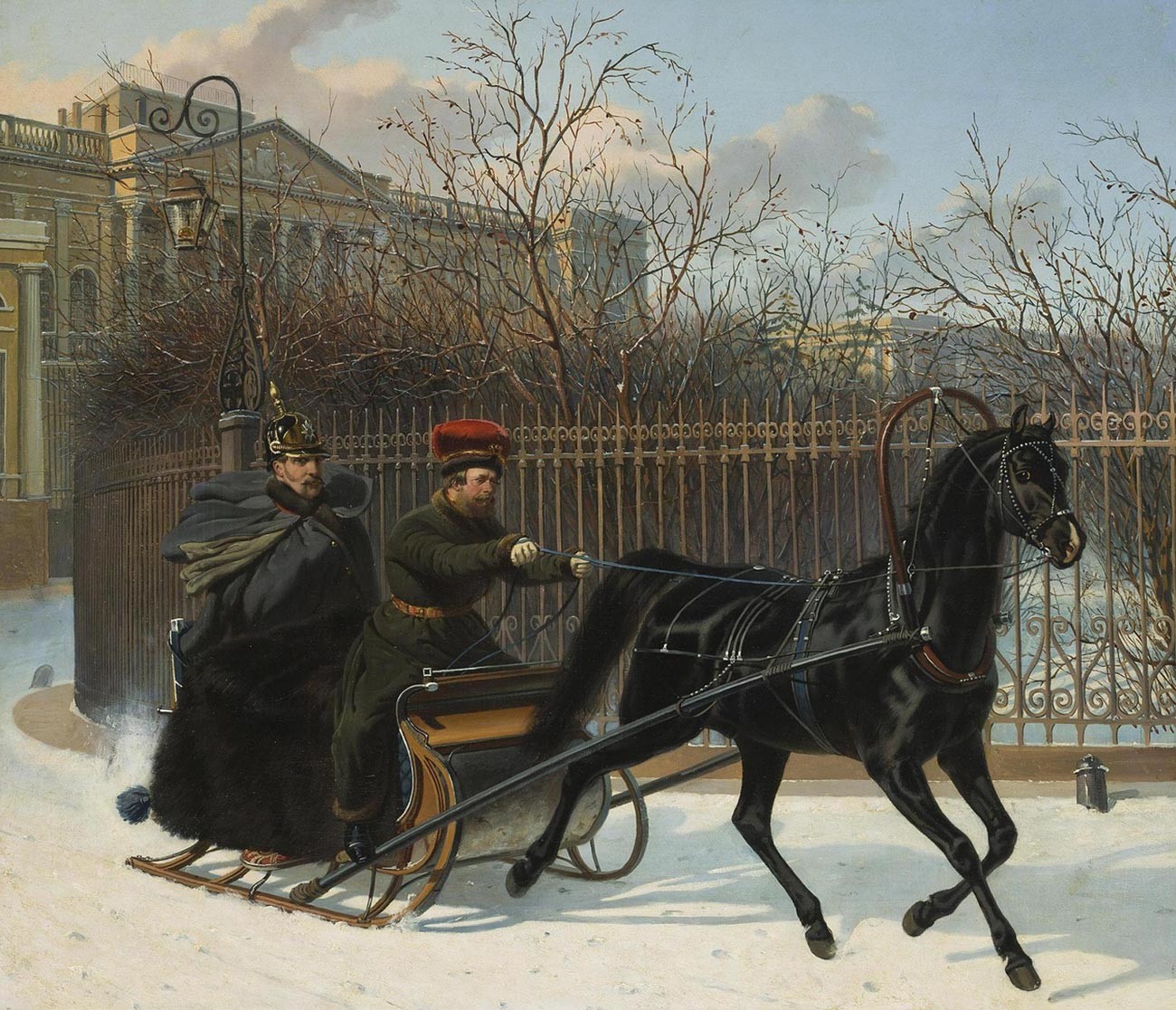 "Emperor Nicholas I in a sledge," by Nikolay Sverchkov, 1850s

The meaning of the Russian phrase “prokatit’ so svistom” (“to ride by with a whistle”) combines the ideas of speed and the coachman’s famous whistle. Although Peter the Great, through various other edicts, tried to introduce special signal horns in the German fashion, coach drivers did not take kindly to them. There is one legend about a coachman who burned his own lips with acid so as not to touch the “devil’s horn.” Coach drivers signaled their approach by whistling and shouting, until, in the latter half of the 18th century, so-called Valdai bells (produced in Valdai village along the Moscow-St. Petersburg route), hung under the shaft bow, came into fashion. True, they rang so loudly that in 1834 Nicholas I decreed that Valdai bells be used only by courier troikas and firefighters.

As mentioned, coach drivers in Russia were known for speeding along far faster than their European counterparts — not for nothing would white-knuckled foreigners cling on in terror. The distance from Novgorod to Moscow — 562 versts (about 578 km) — a coach driver could cover in under three days. As Pushkin penned in Eugene Onegin: “Our troikas effortlessly dashing, and mileposts grip the idle sense by flickering past us like a fence” (translated by Ch. Johnston). As Pushkin himself commented, the hyperbole was borrowed from a certain K., known for his “playful imagination,” who said that “on being dispatched as a courier from Prince Potemkin to the Empress, he rode so quickly that his rapier, its end sticking out of the cart, clattered against the mileposts as if they formed a palisade.” 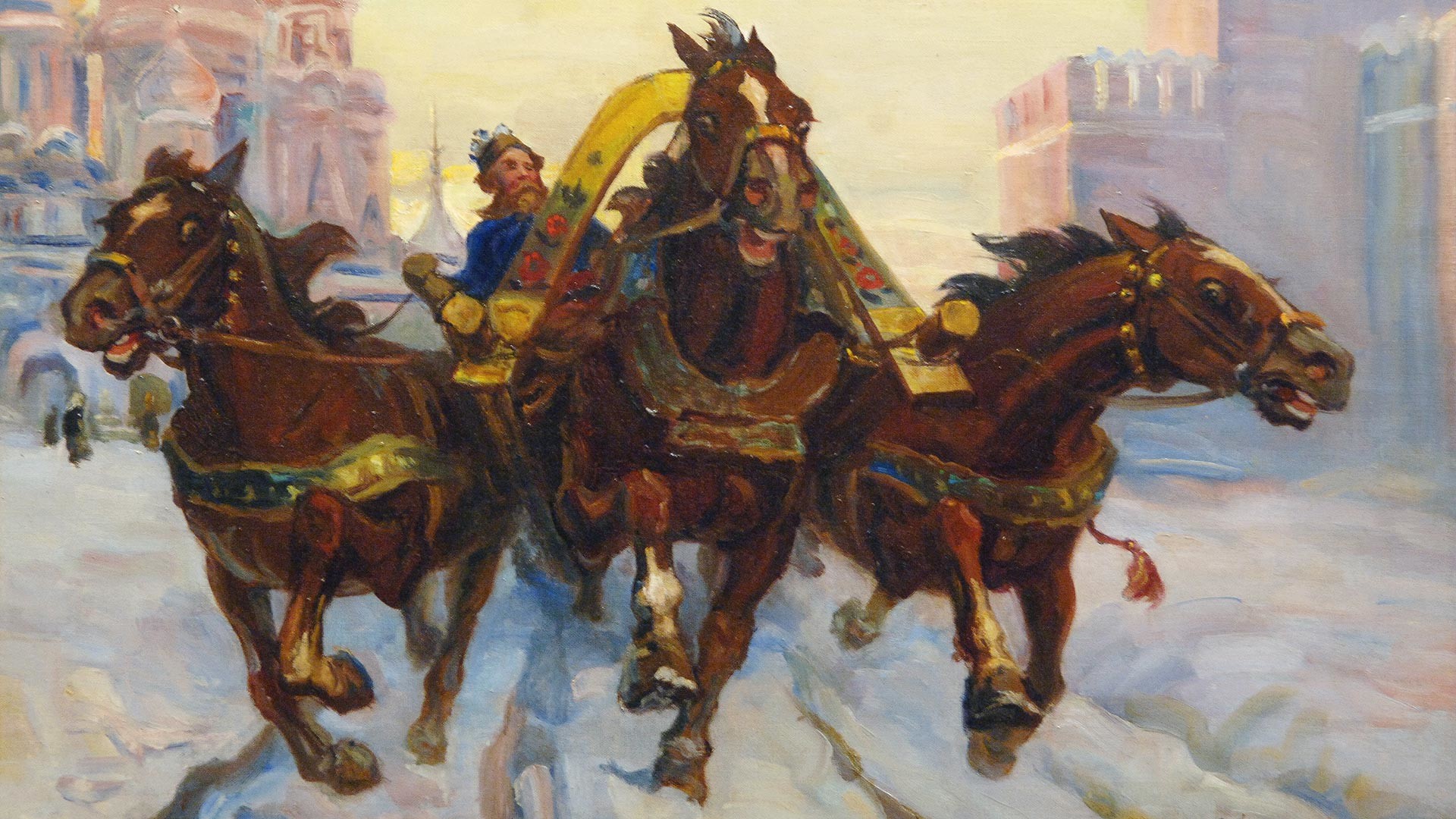 "On a troika through the Red Square. The ancient Rus'," by Alexander Sokolov, 1960

For those times, the speed of a Russian troika was indeed impressive. The aforementioned Astolphe de Custine wrote: “Our troika rushed along at a speed of four-and-a-half or five leagues per hour. The Emperor rides at seven leagues an hour. A railroad train could barely keep up with his carriage.” A league, an old French unit of measurement, is approximately 4.5 kilometers or 3 miles. Accordingly, Custine’s troika would have ripped along at 20-23 km/h, and the Emperor’s at more than 30 km/h!

Ultimately, of course, it was the rapid development of railways in Russia (starting in 1851 with the opening of the Moscow-Petersburg line) that put an end to the coachman’s profession. Henceforth, all mail and cargo got delivered by train, as too were long-distance passengers. Coach drivers gradually returned to their original class, the peasantry, and remained in the national consciousness only as characters in folklore and classical literature.