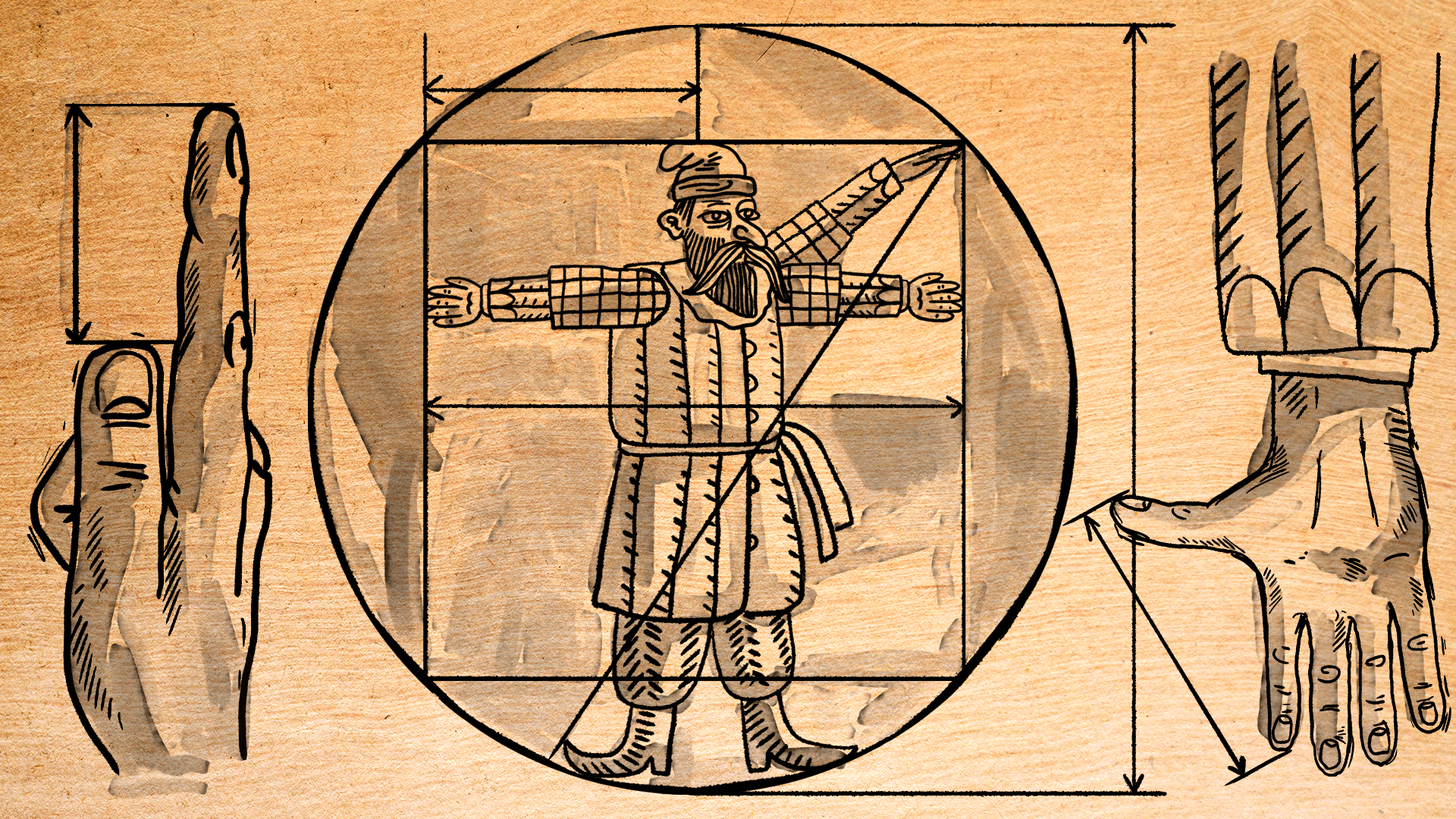 Irina Baranova
Russians eventually switched to the metric system of measurement after the 1917 Bolshevik Revolution, but until then, they had used numerous units to measure length. Moreover, different regions used different names to describe them.

From time immemorial, Russians would measure everything with parts of their own body - fingers, palms, elbows - and for a long time, all these numerous names didn’t correspond to any precise measurements. In different regions of Russia, their length could differ quite significantly. Peter I was the first to try to sort things out - during the 1720s, he ordered that all Russian units of length should match English units. For example, he also introduced the English foot and inch.

A detailed definition of measurements was introduced by Nicholas I in his decree ‘On the system of Russian weights and measures’ of 1835. Then, in 1899, the metric system was introduced, but it continued to be applied together with the traditional Russian system of measurements, until the Soviet authorities abolished it.

Today, Russia exclusively uses the metric system. However, you can come across some of the old Russian units in colloquial speech - numerous proverbs that include such words are still used in everyday life. 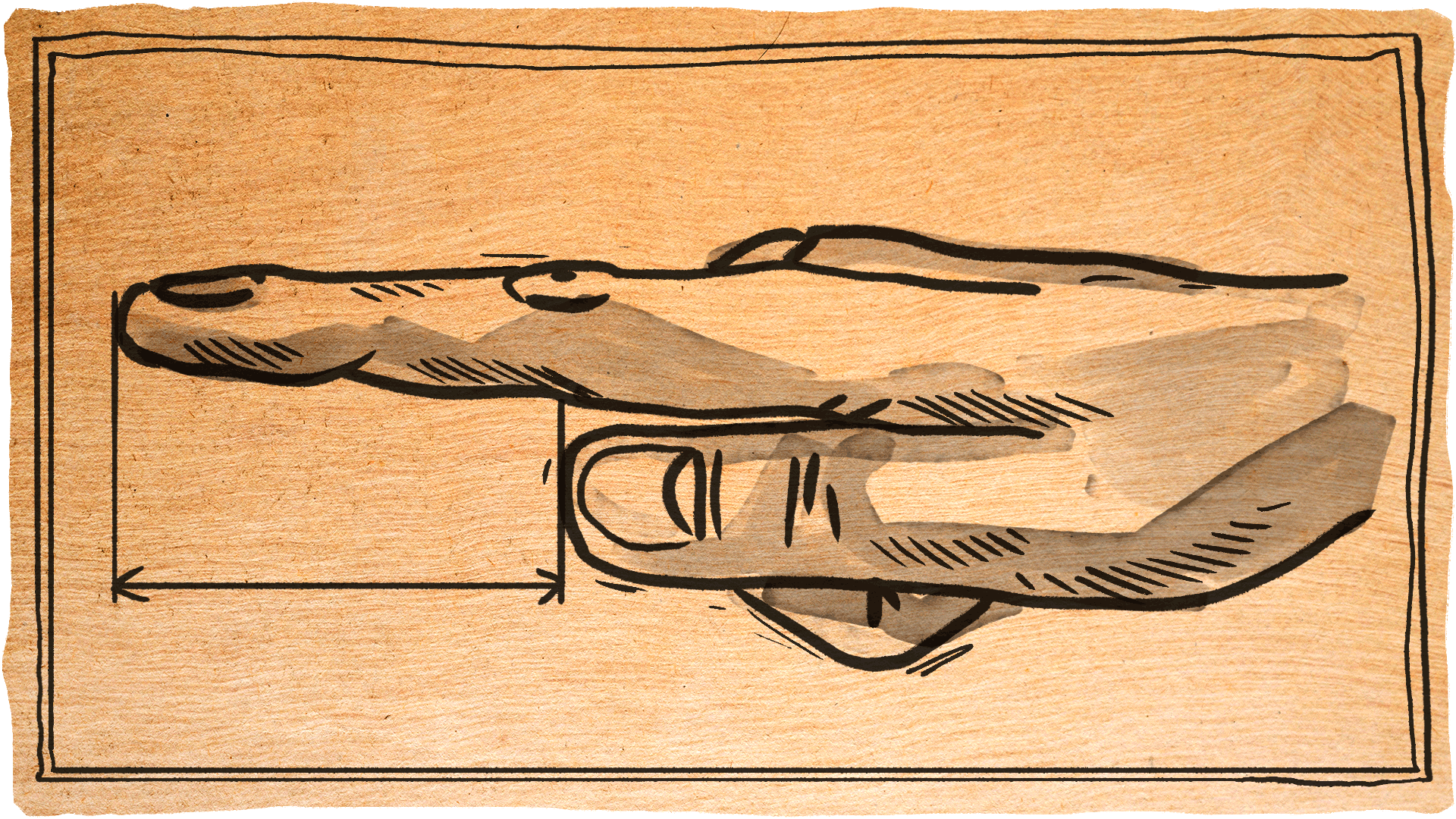 The smallest unit of length originates from the word verkh (“top”), so historians incline to the view that a vershok was equivalent to the main joint of the thumb or index finger of a grown man.

The vershok was so small that it entered the vernacular with a figurative meaning: For instance, in the saying “A vershok away from sin”, or in the proverb “A bag of words, but a vershok of deeds”, which meant that a person talked a lot, but did almost nothing.

It is interesting that the height of a person used to be measured in vershoks. For example, in his short story titled Mumu, Ivan Turgenev describes the protagonist, a deaf and mute porter named Gerasim, as “a man twelve vershoks in height and of heroic build…” But 12 vershoks is little more than half a meter. The secret is that it was assumed, a priori, that a person was at least two arshins tall (=142 cm, see arshin below) and height was calculated in terms of the added vershoks. Also, vershoks were common for measuring cut lengths of fabric. 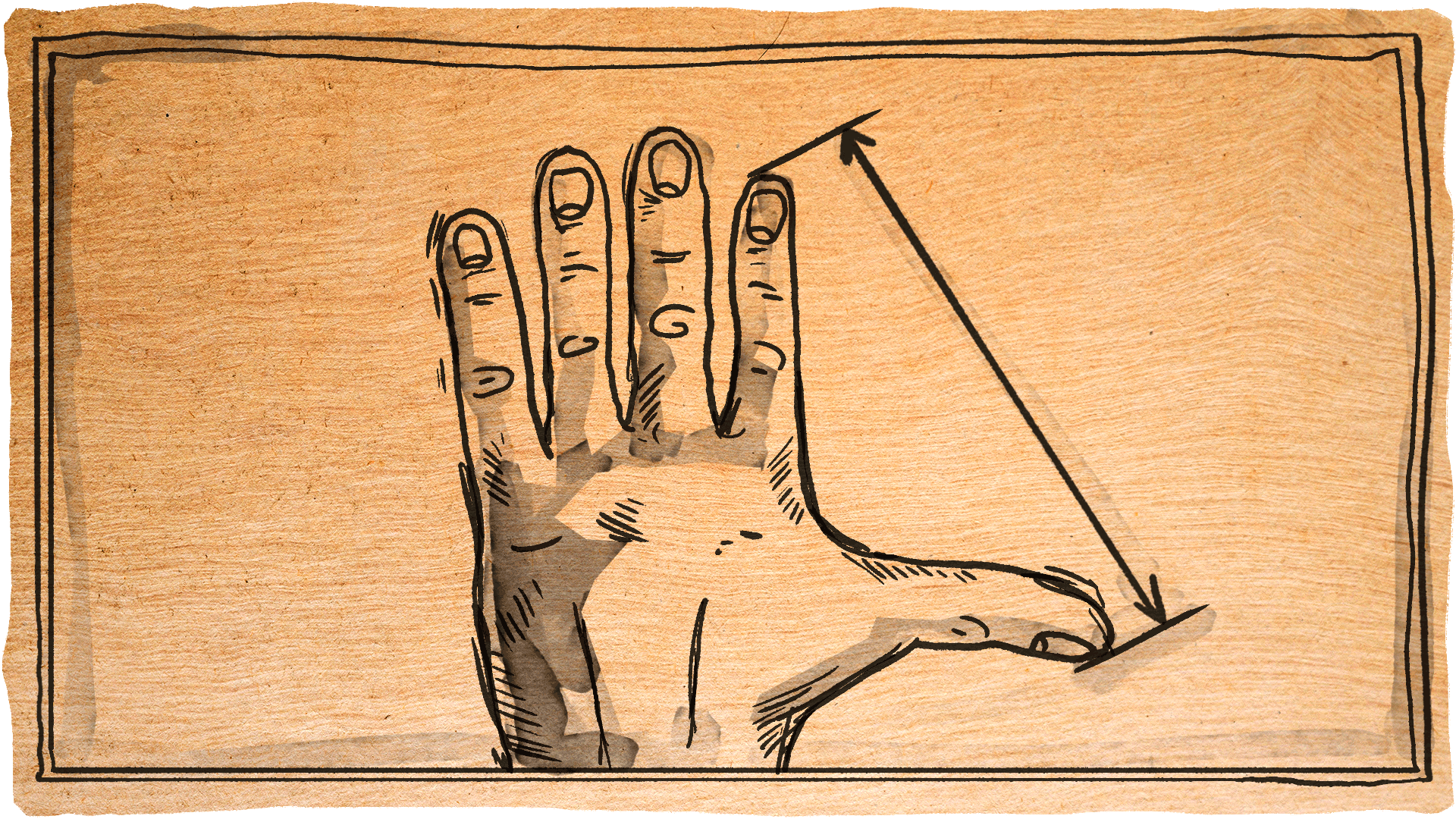 A pyad was equal to the distance from the tip of the thumb to the tip of the index finger when the fingers are outspread. According to different estimates, the pyad measured between four and six vershoks. In Old Russia, the unit ranged between 17 and 31 cm - different sources mention a “big pyad” and a “little pyad”, and even something called a “pyad with a flip” (which was equivalent to the length of a standard brick in those days).

Under Peter the Great, the pyad came to be called a chetvert (“quarter”) and its length was set at seven inches. The pyad was a very common unit of measurement, widely used in everyday life (for example, for measuring the depth of snow or the size of an icon).

There is a proverb, “To be seven pyads across the forehead”, used to describe an incredibly smart person.

The old Russian lokot was the distance from the elbow to the tip of the middle finger. Different regions of the country had different measurements for the lokot, with the precise value ranging from 36 to 54 cm. It is known for certain that the ‘Moscow lokot’ was equal to two pyads or 35.6 cm.

The lokot was particularly useful in trade. The diminutive form of lokot - lokotok - is encountered in sayings such as: “He’s about a lokotok in height but his coat is still too short” or “He’s only as tall as Tom Thumb, but his beard is a lokotok long”, which pointed to a discrepancy between someone’s external appearance and their intellect or social standing. 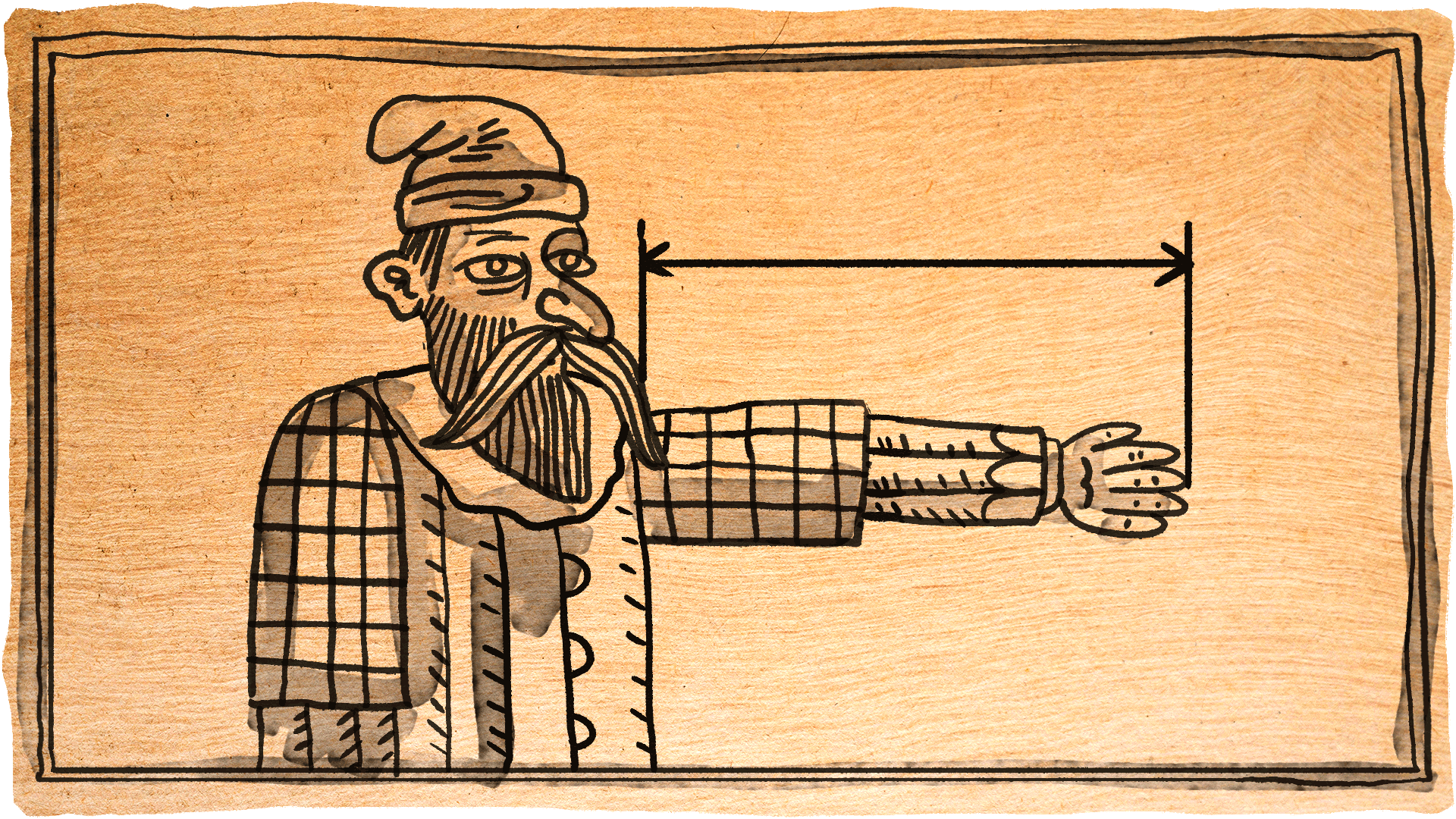 The arshin is roughly equivalent to two lokots or the distance from the tip of the middle finger to the shoulder. The first measuring sticks were one arshin in length and were divided into vershoks - there were 16 vershoks in one arshin. That is why people’s height was expressed as two arshins with the addition of the requisite number of vershoks.

Arshins were also used to denote paces - in the 19th century, for instance, the range of a rifle was measured in arshins. The arshin pushed out the lokot and firmly established itself in commercial usage, although at first, its precise length was not regulated and every trader had his own idea of what it should be. This was the origin of the phrase “To measure everyone according to one’s own arshin”, the figurative meaning of which is to judge everyone by one’s own standards. 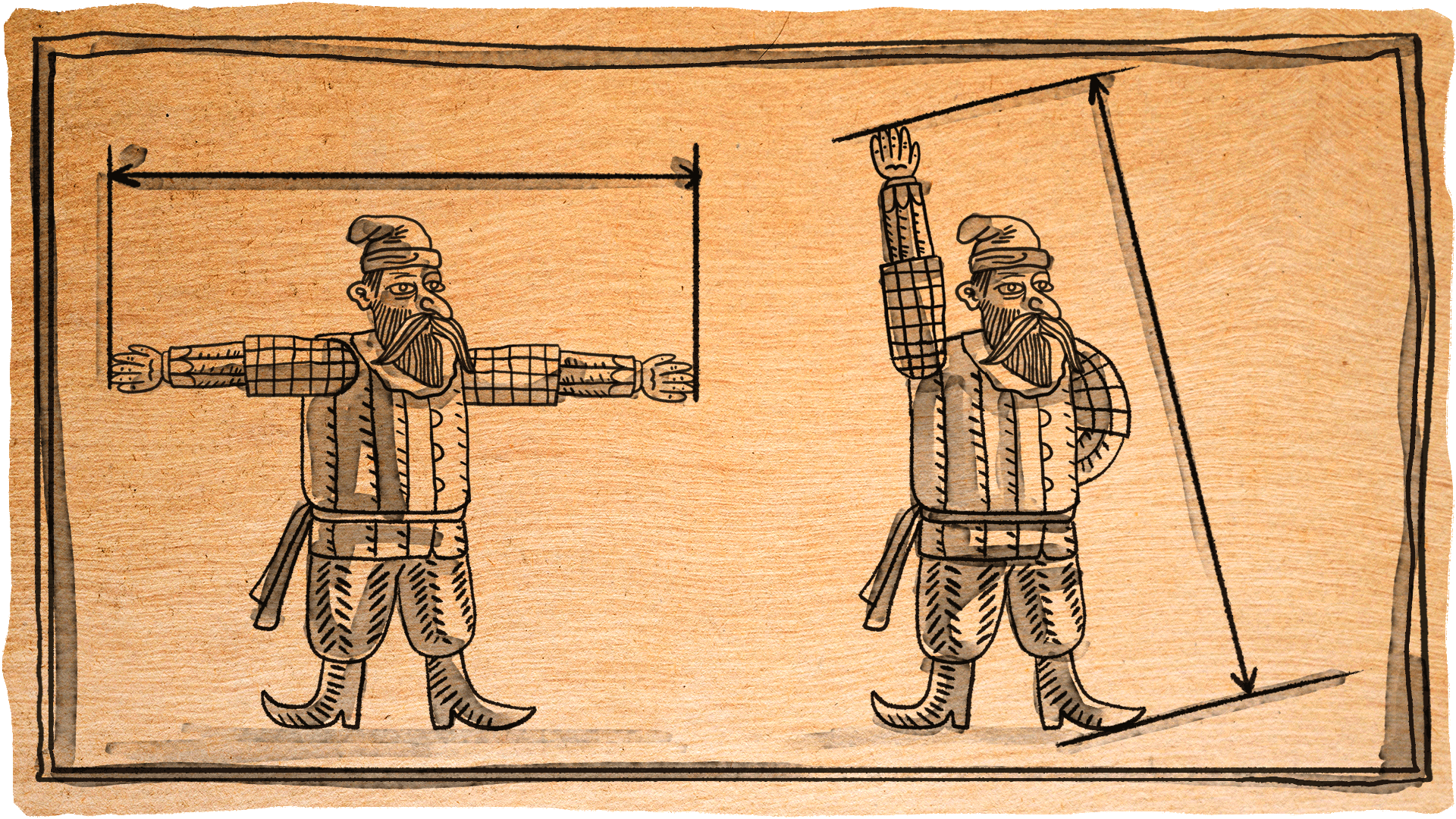 The sazhen was the distance from the finger of one hand to the finger of the other hand when the arms were stretched horizontally sideways. The unit subsequently came to be defined as seven English feet. Sazhens were used to measure distances when travelling and they were also employed extensively in construction and work on the land.

There was also a “skewed sazhen”, which was the distance from the outstretched hand to the sole of the opposite foot - equivalent to about 2.5 meters. There used to be a popular saying: “Shoulders as broad as a skewed sazhen”. It was used when referring to someone with a powerful physique.

The verst was probably the most popular unit for measuring distance. It was equal to 500 sazhens, or slightly more than one kilometer. Highways were measured in versts and special “verst posts” marked each verst of the road. This was needed above all for the convenience of the postal service.

The word survived for a very long time in the Russian language and literature, because of its near equivalence to a kilometer. Proverbs such as: “You can hear it a verst away” or “For a mad dog seven versts is no detour” (meaning if someone is unreasonably determined, they will go to any lengths) refer to the long distance denoted by this unit of measurement.