What kind of TOILETS did Russian tsars use? 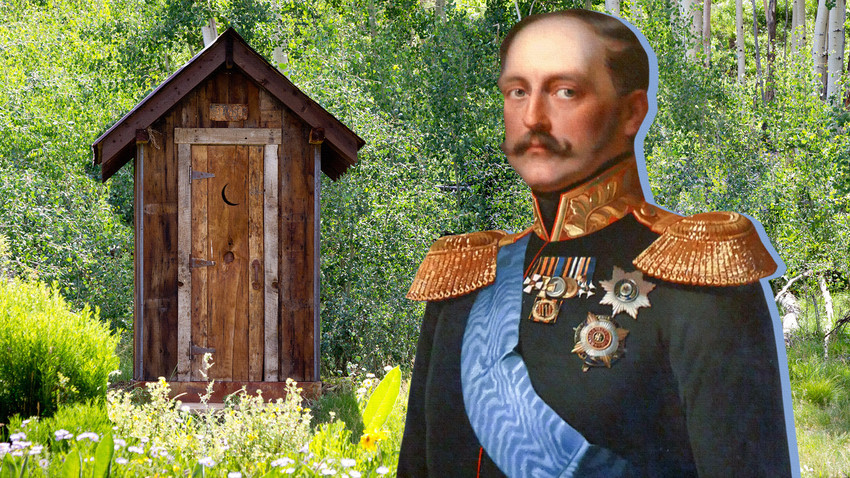 Getty Images; Russia Beyond
Historians don’t often write about Russia’s lavatory history. We dug into it, though.

In the 19th century, the topic of lavatories and their organization was considered among Russian historians to be “unbecoming” and “lowly.” But “Where did the Russian Tsar go on foot?” is one of the most-asked questions among people visiting the historical palaces and residences in Russia.

Obviously, the way the Russian villagers managed their restrooms was in no way different from the way it’s managed in any village around the globe – a cesspit somewhere in the back of the yard. But the nobility and the Russian royals, who lived in stone palaces, had lavatories on a completely different level.

“The toilet was located in the north wall of the hall and was lit by a small window,” – historian and restorer Boris Postnikov wrote about the toilet in the stone house of Mikhail Sarpunov, a rich Pskov silversmith of the 17th century. “The sewage went through a vertical intra-wall channel, possibly equipped with clay pipes, into a special bucket installed one floor below in an intra-wall niche. On one side of this niche there was a slit-shaped window into the street for ventilation, and on the inside of the building – a small door to replace the bucket.” 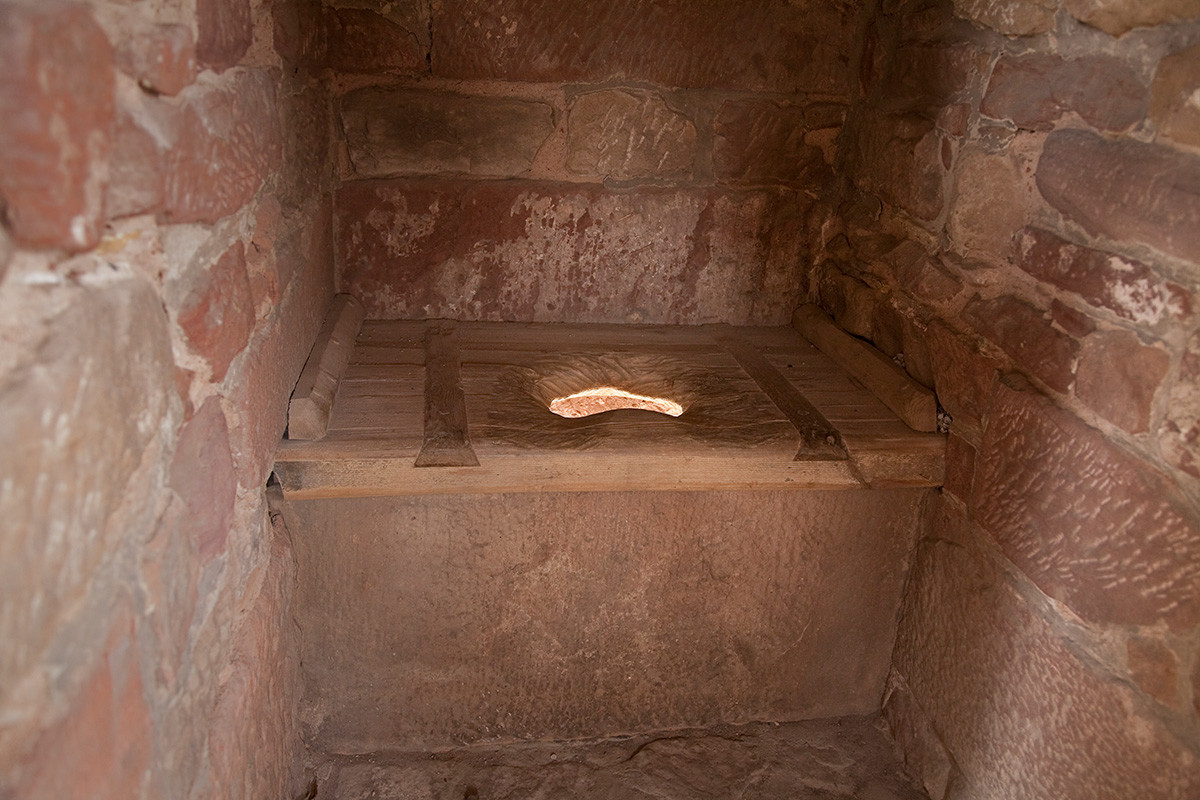 A typical medieval toilet, pretty much the same in Northern Europe as in Russia.

In this example, you see that the disposal area was located on a lower floor and equipped with ventilation to get rid of the smell. Such lavatories were known in European castles since at least the 15th century. But where did the waste eventually go? In the local rivers, anyway. A historian of technology Nikolay Falkovsky revealed that the Moscow Kremlin, from as early as the 17th century, had a sewage system that went to the Moskva and Neglinnaya rivers. The tsars used personal lavatories or chamber pots, while the civil servants who worked in state institutions inside the Kremlin had their collective lavatories inside the institutions’ buildings, which were cleaned… annually.

Where were the loos installed? A description of Ivan the Terrible’s premises in Kolomna says that the restroom was remote from the chambers of the tsar and tsarina, and connected to them with wooden passages. A description of Aleksey Mikhailovich’s palace in Izmailovo (1687) shows that restrooms were available on every floor of the palace, located near the living rooms and separated from them by passage rooms. 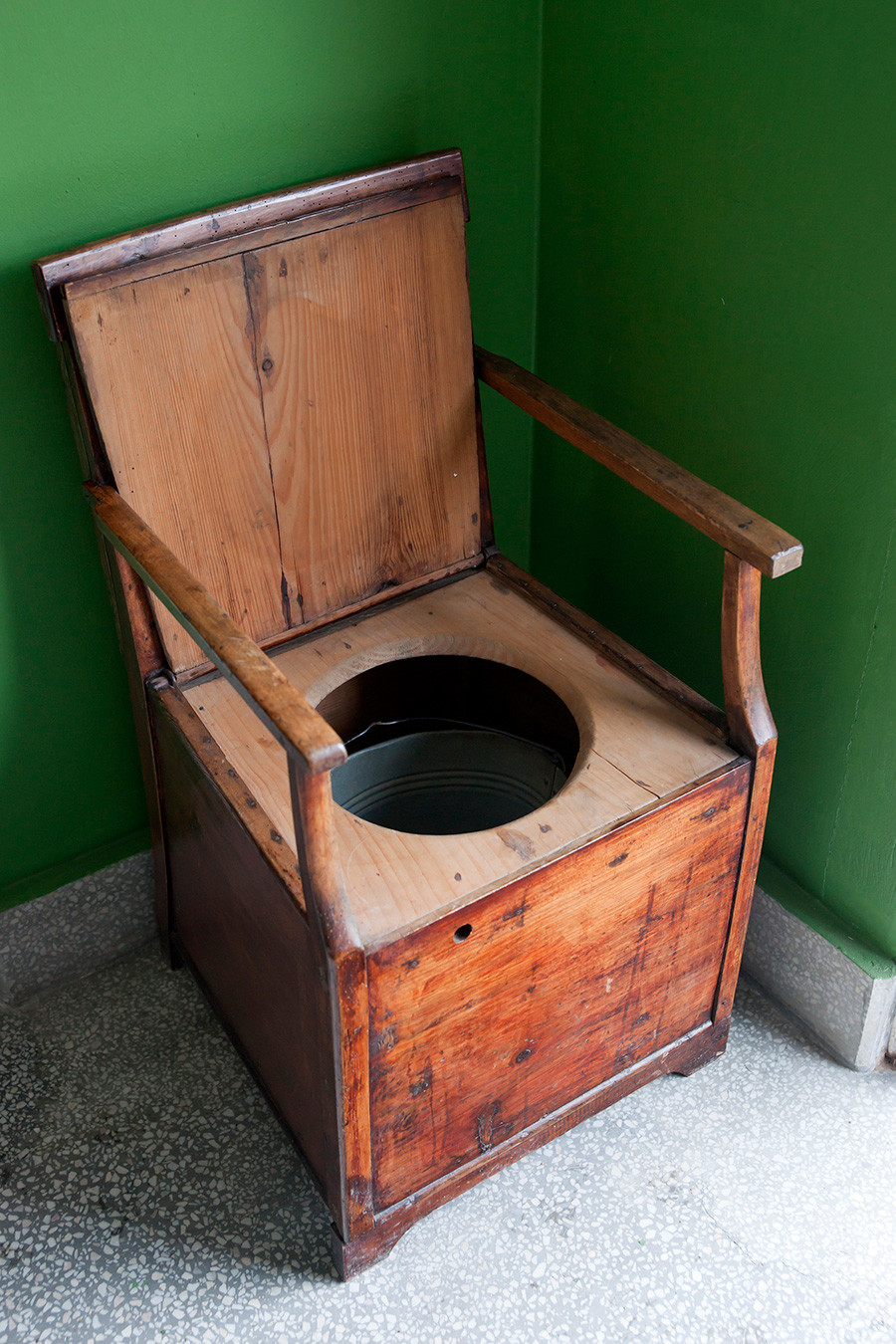 Vintage toilet made of wooden armchair and bucket.

The insides of the tsar’s and tsarina’s restrooms were upholstered with red cloth. Their portable copper chamber pots that could be taken on the road were also upholstered with red velvet and carried in special leather cases. Chamber pots were used inside the living rooms, as well: Peter I, the records say, had his own pot, covered in red cloth and red satin, until he was 11 in 1683. Although it wasn’t unbecoming for a nobleman and a royal to use a chamber pot even when they were grown up.

Where the Emperor goes on foot

What was inside a rich man’s loo in the Russian 18th century? A rare foreign description of a Russian lavatory was made by Daikokuya Kōdayū (1751-1828), a Japanese captain whose ship was blown off course near the Aleutian Islands in 1783. Kōdayū subsequently spent almost 10 years in Russia. Upon his return to Japan, he was thoroughly interrogated by his compatriots about life in Russia, describing it in detail.

Kōdayū wrote that restrooms in Russian cities were organized inside houses, and even four or five-storeyed houses had a restroom on each floor. Inside, a seat “in the form of a box, 40-50 cm (15-20 inches) high,” with an oval opening, “with edges whittled and smoothed.” For children, there were special restrooms with seats that were lower. “Latrines can be spacious, with four and five holes, so that three or four people can use them at the same time. Noble people even have stoves in their latrines to keep them warm,” Kōdayū wrote. “Under the holes are large copper funnels, and everything flows from them into a large vertical pipe leading to a cesspit, which is dug deep under the house and lined with stone.” The cesspit was emptied regularly by ‘sewage teams’ staffed by low-class people. 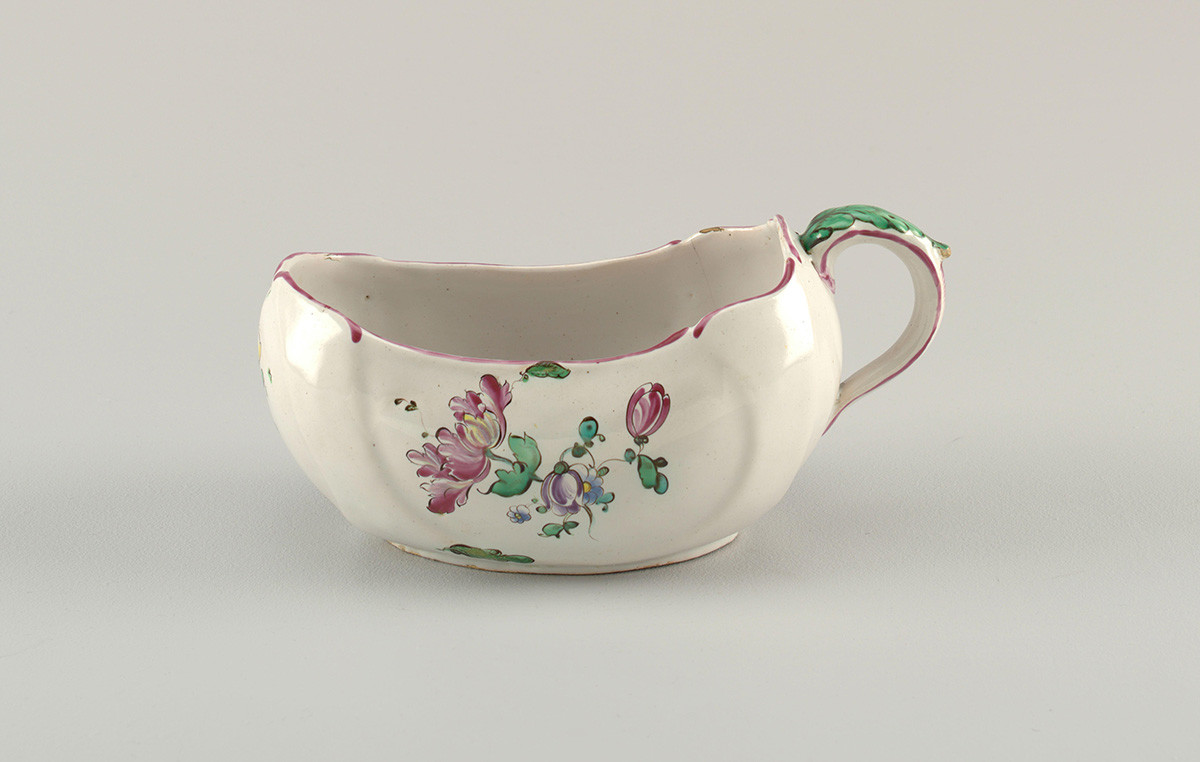 How were personal hygiene matters organized in the Winter Palace and other Russian royal residences? Largely the same way as in Moscow, but with a European turn to it. Instead of the bulky chamber pots, for urination the ladies used a bourdalou (urinal) – a kind of a bedpan that could be tucked underneath the skirt during the day without the need to go to the restroom. Inside the rooms, chamber pots were still present, but during the 18th century, restrooms became the norm in noble’s houses and royal palaces.

In 1777 in England, a contemporary-looking flushing toilet was first introduced. Toilets used by Russian tsars from the late 18th – early 19th centuries differed little from the ones we use now. The serious difference was in the sewage system – until the 19th century, the Winter Palace didn’t have central sewage, only solitary wooden or clay pipes here and there. The waste was eventually taken out of the palace in buckets (much like in the 17th-century Sarpunov’s house in Pskov) and poured into the Neva river. 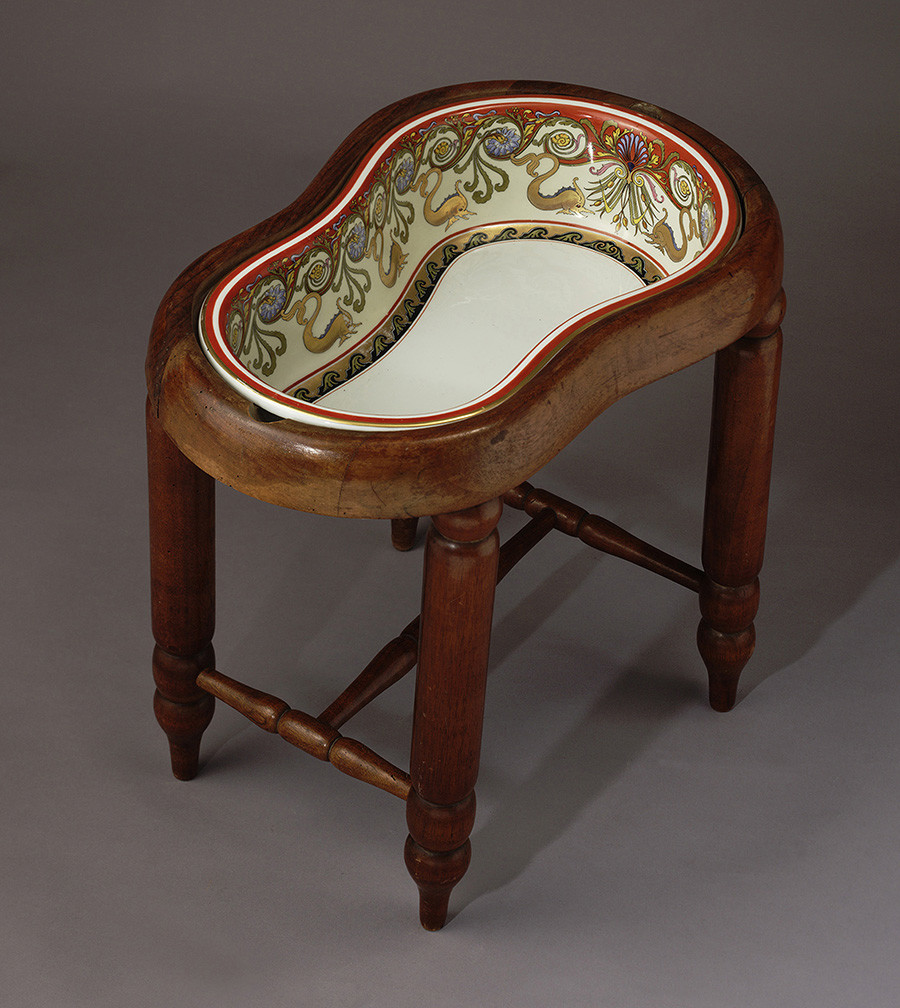 A bidet that belonged to Elisabeth of Bavaria (Carl Knoll Porcelain Factory, Carlsbad), 1887-1890.

In 1826, flow-through flushing toilets with drainage systems were installed in the Winter Palace. Emperor Nicholas I, who paid great attention to personal hygiene, ordered WCs to be installed in his rooms and the Empress’s rooms, and also not far away from the main reception halls. During big receptions at the palace the question of restrooms was acute – sometimes, hundreds or even thousands of people were present in the palace during ceremonies. The first Winter Palace’s central sewage was equipped with pumping machines and an underground waste reservoir. The waste was then again flushed into the Neva. 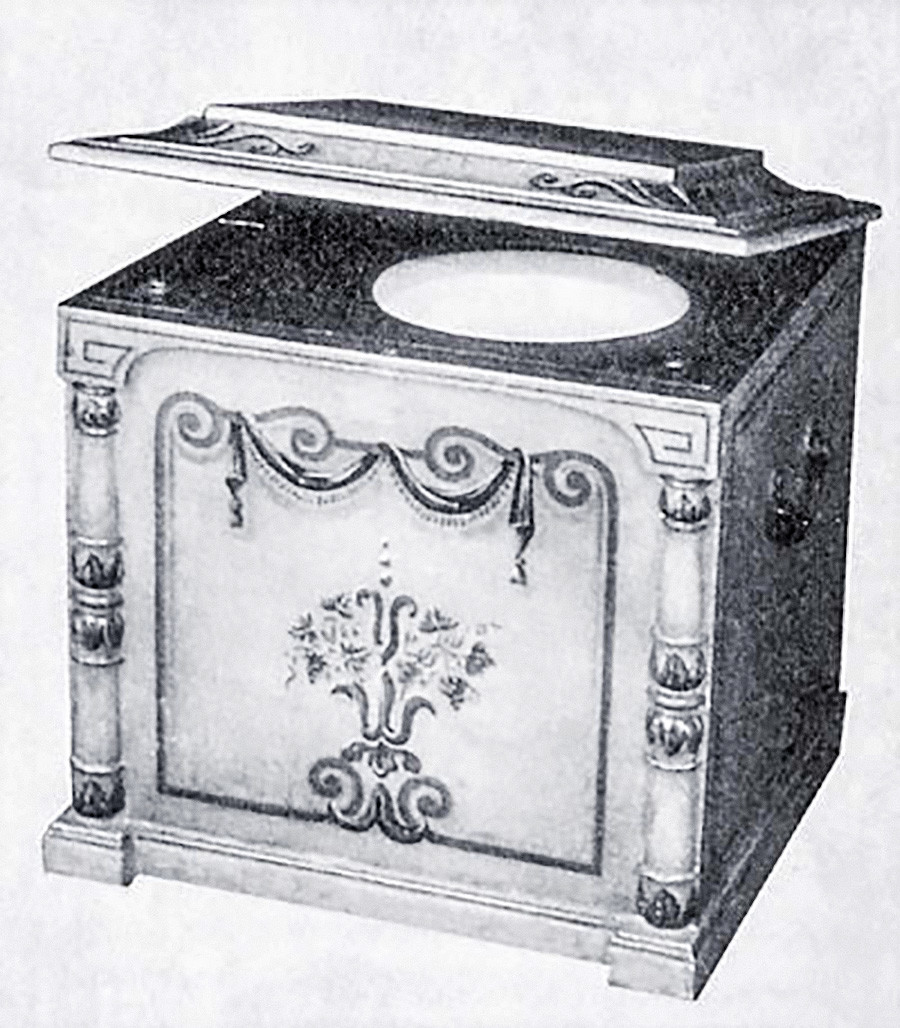 After 1838, historian Igor Zimin writes, glazed toilet bowls were installed in the Winter Palace. All of them were installed in wooden cabinets inside the walls of the rooms, with their doors disguised as wardrobes – and this ‘tradition’ was preserved until the early 20th century. Nikolay Sablin, a captain of the Emperor Nicholas II’s yacht, remembered that in 1914, when French President Raymond Poincaré was on a visit in Russia, he was confused trying to find a restroom in the Peterhof palace: “In this old palace, the lavatory was a very old-fashioned apparatus, built into the wall and paneled with wood. Like a wardrobe. When the president needed this corner, he could not find it. And when it was pointed out to him, he was extremely confused by such an antediluvian thing and did not know how to get into such a cabinet…”