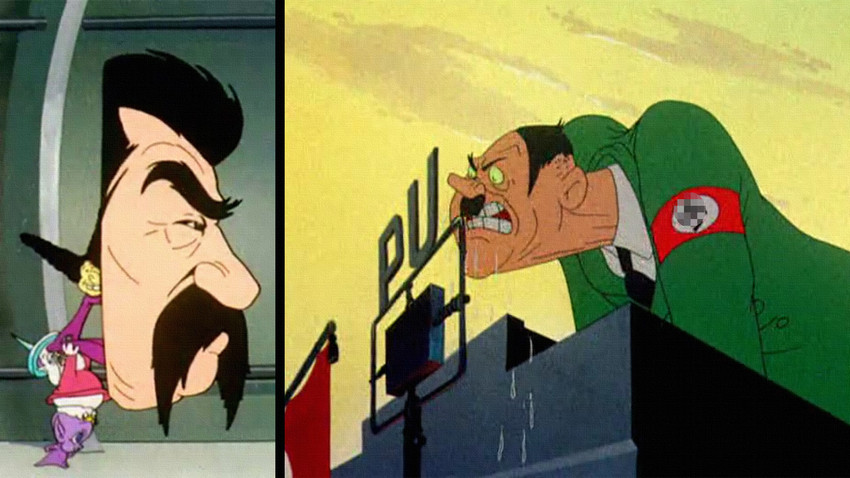 Robert Clampett/Warner Bros. Pictures, 1944
This seven-minute-long cartoon about gremlins destroying a Nazi airplane on its way to Moscow is Warner Bros. staff’s gesture of solidarity to the Soviet and American cause during WWII.

It’s WWII and Hitler boards a bomber to personally destroy Moscow. On the way to the USSR, he encounters “gremlins from the Kremlin” who wrack his airplane and ruin his wicked plan.

This is not Hitler’s worst nightmare, but a plot of a cartoon produced in May 1944 by Warner Bros. and a team of American animators who would create the famous Looney Tunes a few years later.

The storyline of the Russian Rhapsody is indicative of the American public view of WWII in 1944: Hitler is depicted as a historical warmonger who’s bound to lose eventually.

In the cartoon, frustrated by the failures of the Nazi Wehrmacht, Hitler declares he will personally fly a bomber to destroy Moscow, the capital of the USSR. On the way to Moscow, gremlins — folkloric mischievous creatures that are believed to cause malfunctions in aircraft and other machinery — start dismantling the Nazi warplane without Hitler being aware.

The troublesome creatures go berserk with the plane’s equipment, destroying it while singing “We are gremlins from the Kremlin” to the tunes of classic Russian melodies like ‘Dark Eyes’ and ‘Song of the Volga Boatmen’.

Along sing other gremlins:

We’re gremlins from the Kremlin

We’re gremlins from the Kremlin

I’m a gremlin from the Kremlin

We are Russian gremlins

Up in the sky we're found

We smash right to the ground

We like nothing better than to mess up Messerschmitts

And send their heavy bombers down to earth in teeny bits

Napoleon and his army never got to first base

We’re in the Nazi’s hair

And when they try to catch us

We’re the little men... who weren’t there

We’re the little men who weren’t there.

After the five-minute-long abuse of the unsuspecting Hitler, the gremlins reveal their presence and drive the Nazi leader off the bomber and into a free fall. Hitler lands on the ground and tries to shelter from the falling bomber, but ends up hitting Hitler, burying the Nazi alive, while forming a headstone with the plane’s tail.

The seven-minute-long cartoon ends with a final shot of a gremlin pounding Hitler back into the ground with a sledgehammer.

In a way, ‘Russian Rhapsody’ might well have been a personal message from Warner Bros. to Nazi Germany and Hitler, as the gremlins’ visual looks were, in fact, based on the employees of the Warner Bros. animation department staff.