Mikhail Gorbachev turns 90: The man that changed the world (PHOTOS) 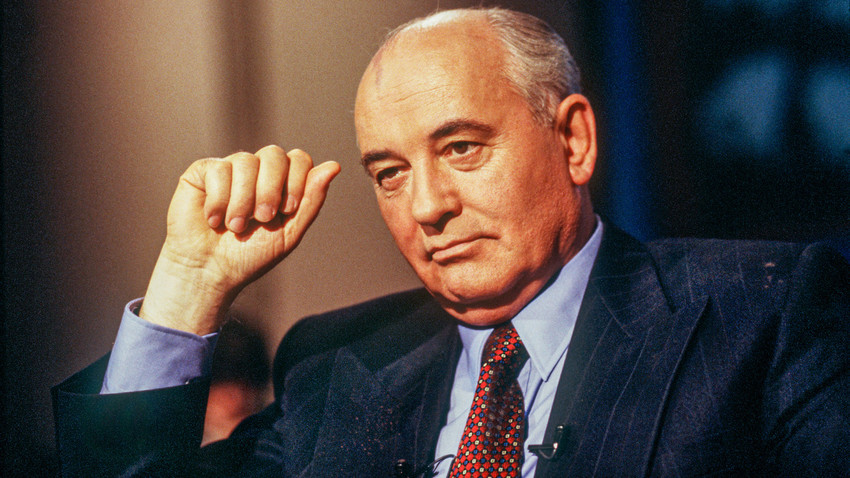 Getty Images
The first and last President of the USSR turns 90 on March 2. Take a look at snapshots of the Nobel Peace Prize laureat’s life in the revealing gallery we’ve put together below.

Mikhail Gorbachev was born in 1931, the year Joseph Stalin tried to eliminate the peasant class with his “iron hand”: He put a ban on private farms, instead creating collective ones, while implementing policies of terror against those who did not agree. No one could have imagined back then that, six decades later, freedom would be enjoyed not only by private farmers, but by several dozen peoples and republics - all because of a boy from a Stavropol village in the North Caucasus. 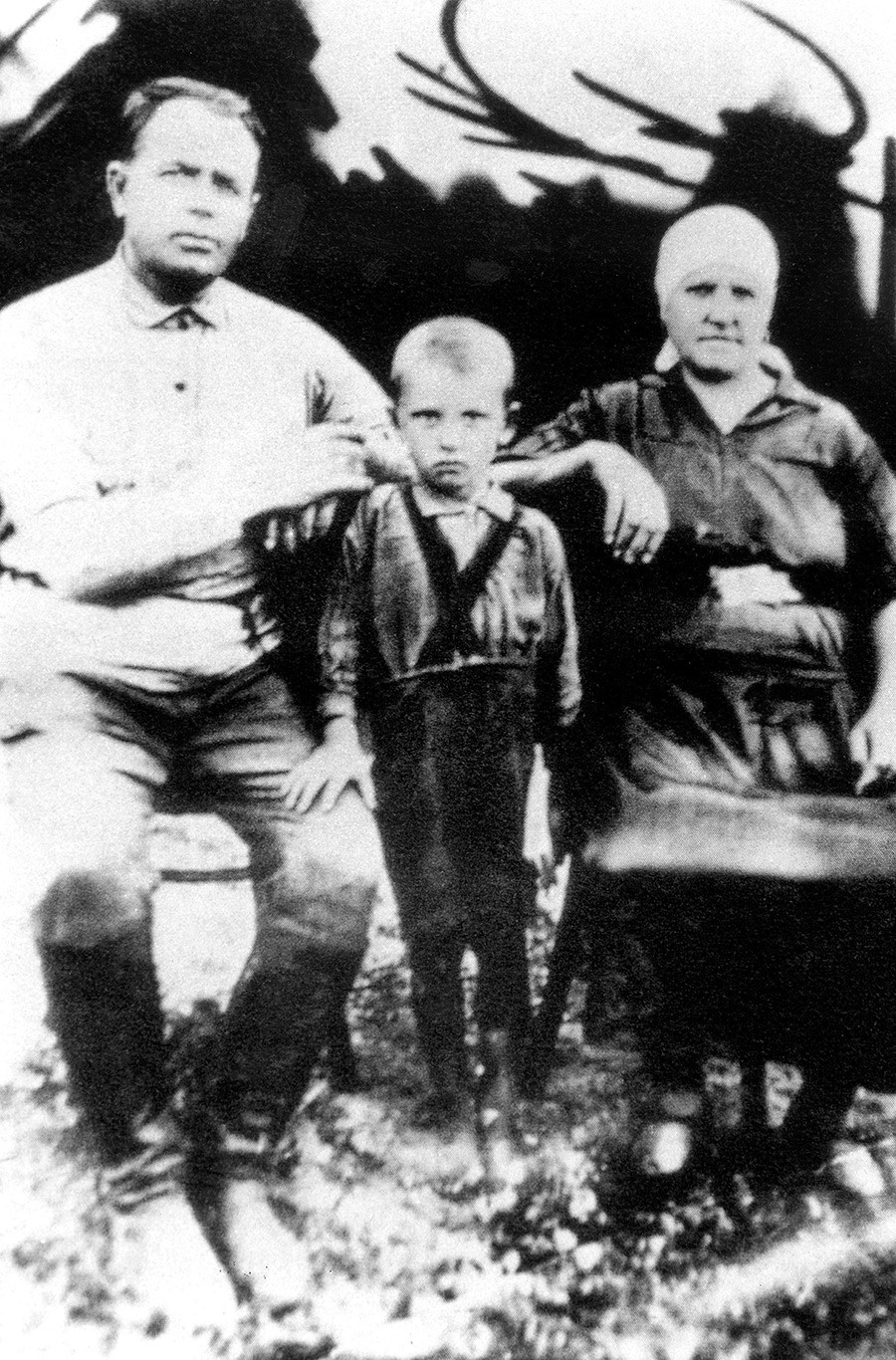 Gorbachev grew up in an ordinary peasant family, his youth spent in the field operating a combine harvester. He was all too familiar with the policy of collectivization. However, one of his grandfathers was actually the head of a kolkhoz (a Soviet collective farm), so the horrors of collectivization - the hunger, the arrests and the forced labor - did not affect his family. 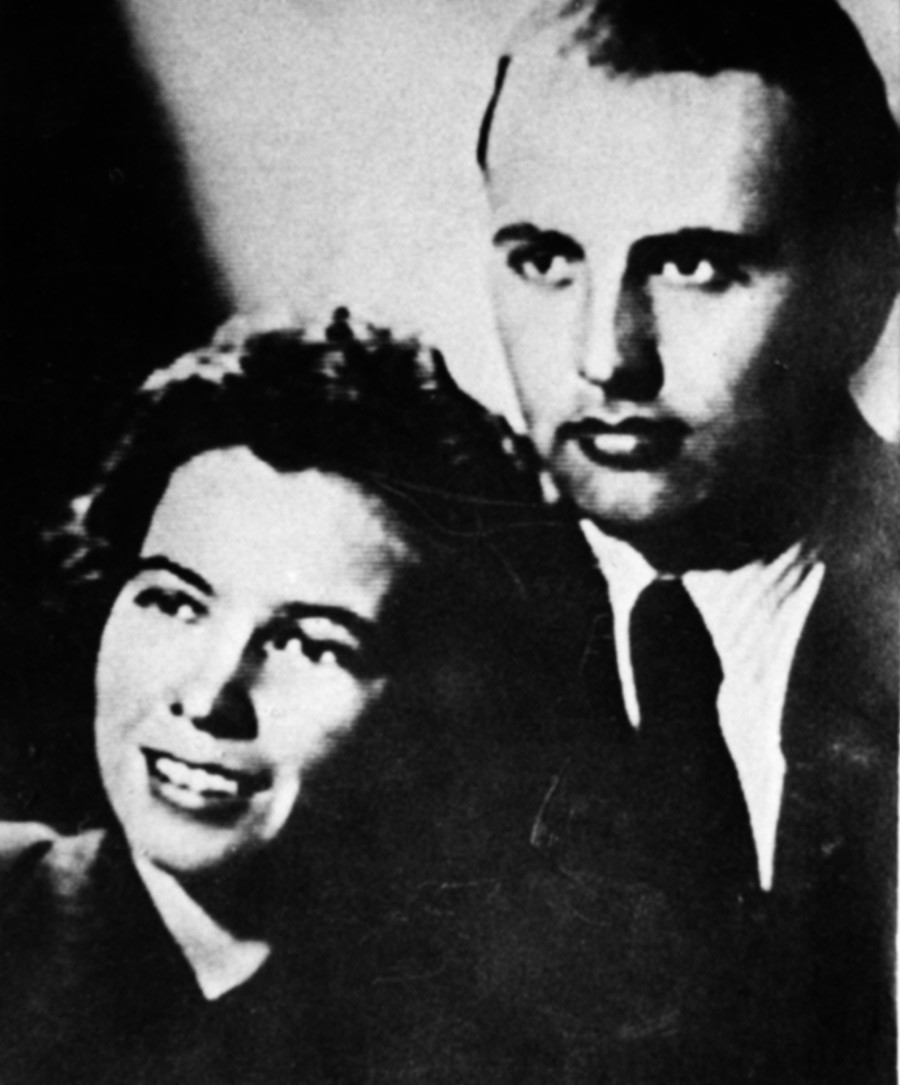 Mikhail and Raisa Gorbachev when they were a young couple

After the war (the family had spent four months under German occupation), Gorbachev graduated high school with honors, became a komsomol activist and even received the Order of the Red Banner of Labor, for helping his combine-operating father gather a record-breaking harvest. 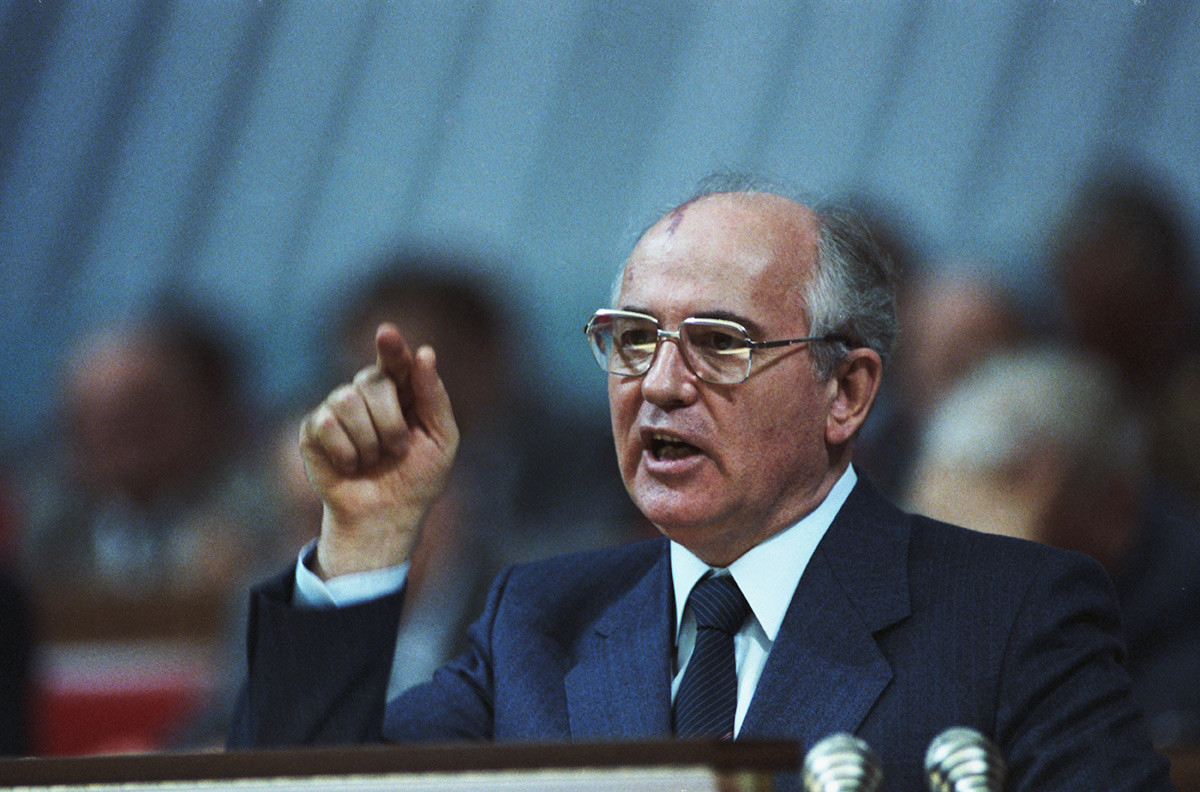 General Secretary of the CPSU Central Committee Mikhail Gorbachev gives a speech in 1973.

That experience would later be put to good use. Gorbachev ended up taking the post of Minister of Agriculture of the USSR. But before then, he would put himself through the country’s best university, the Moscow State University (MSU), where he studied to become a lawyer. This, according to him, was “the start of a prolonged process of re-envisioning the country’s history”. 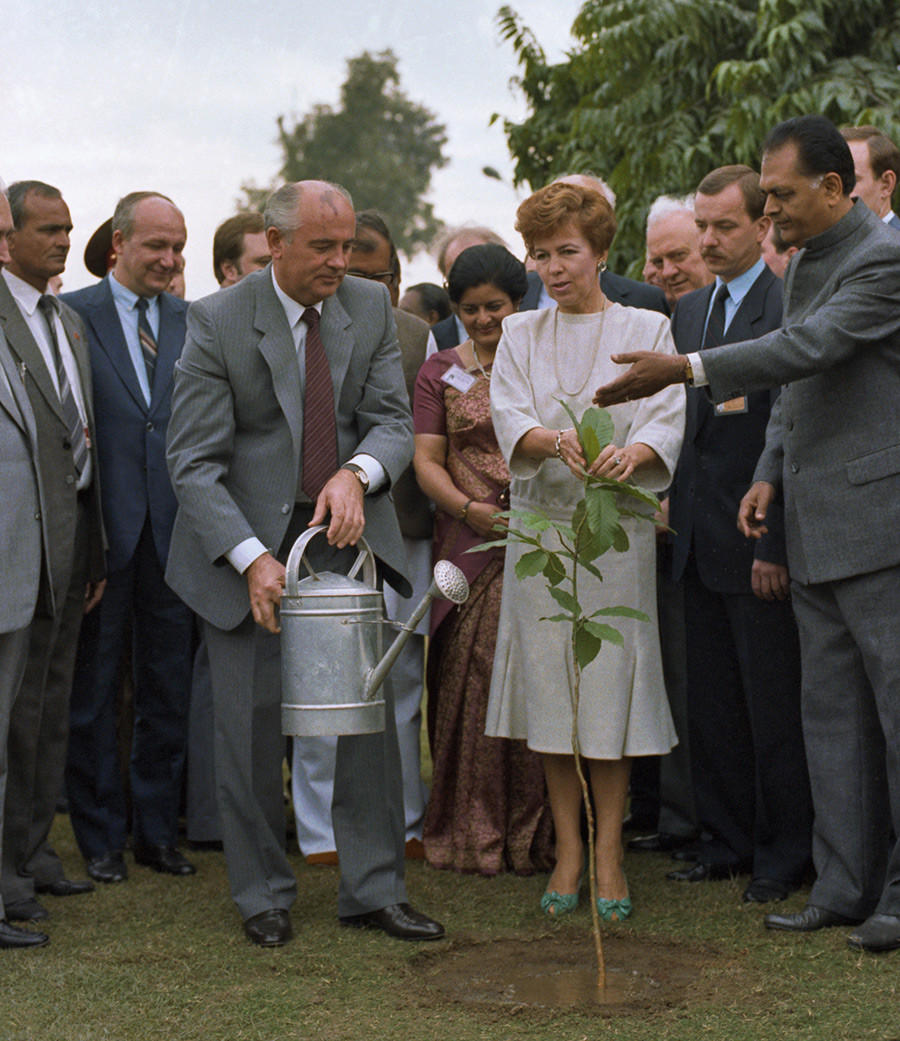 In 1950, Gorbachev met his future wife Raisa, who would become his loyal partner and best friend. The wedding ceremony took place three years later in the canteen of the student dormitory where he lived. 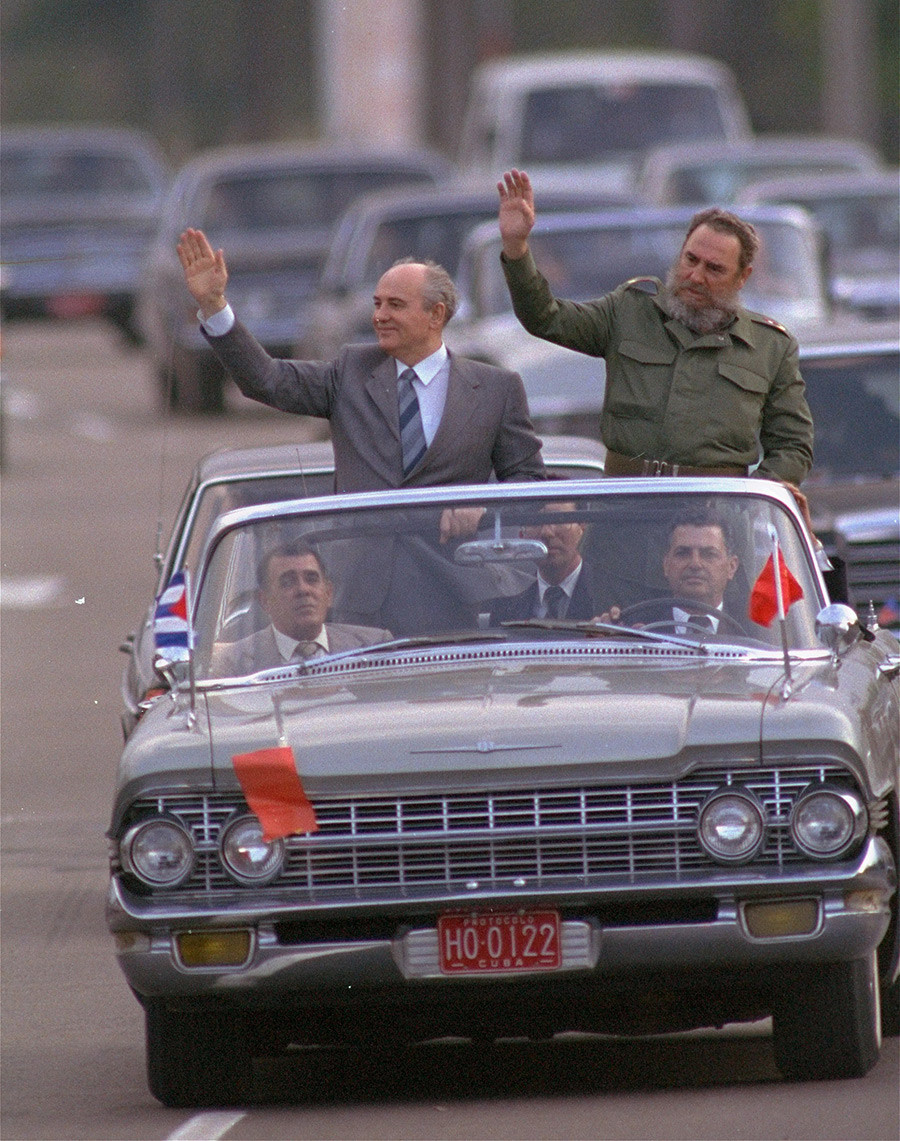 Gorbachev’s party career took off from there. He garnered the loyalty of the “second and third faces” of the country under Leonid Brezhnev - as well as being in the leader’s good graces. The Communist Party nomenclature unofficially referred to him as the “Boss of Stavropol”. 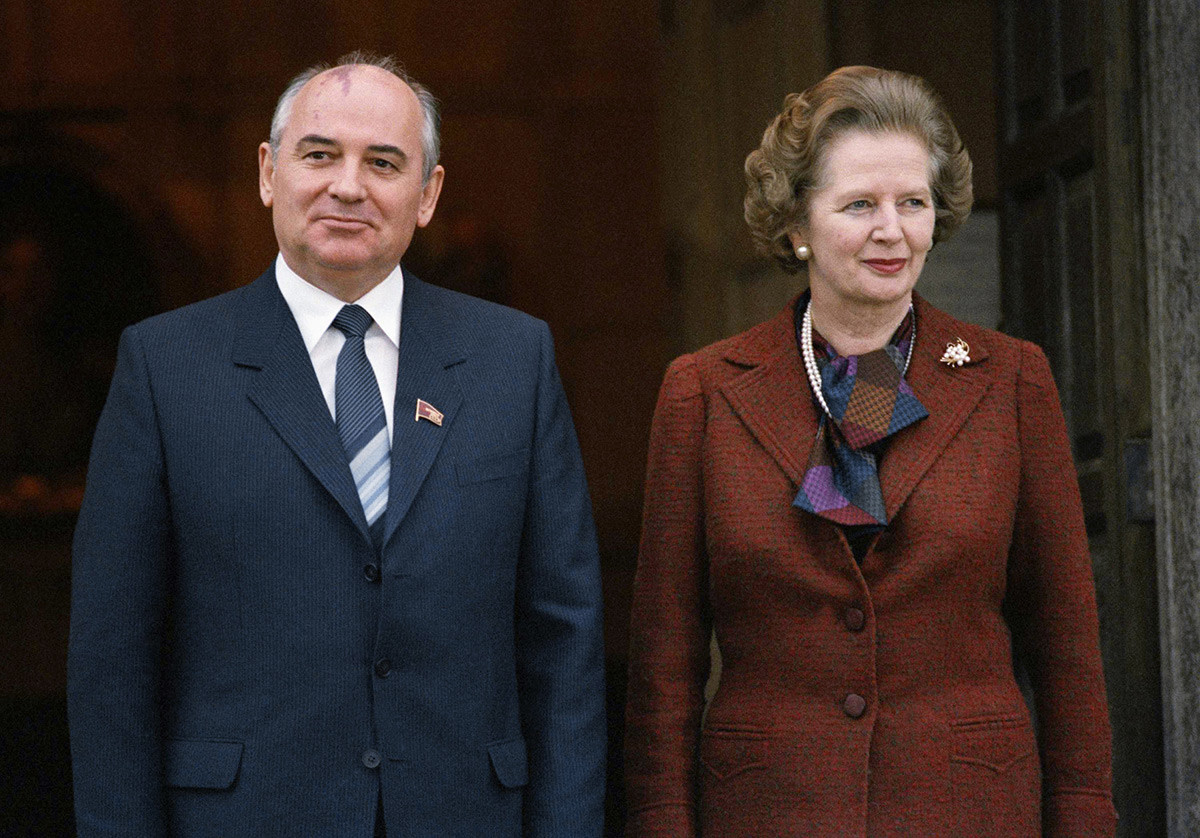 Gorbachev assumed leadership in 1985. As General Secretary, he was very different from many of his predecessors. They did not have his strong health, nor his clarity of mind. At 54, he was relatively young for the post and his “youthful” appeal, openness, education and willingness to mingle with the common people earned Gorbachev sympathy from the West, as well as his own people, who yearned for change. “An all too unexpectedly normal human being,” Francois Sagan said of him. 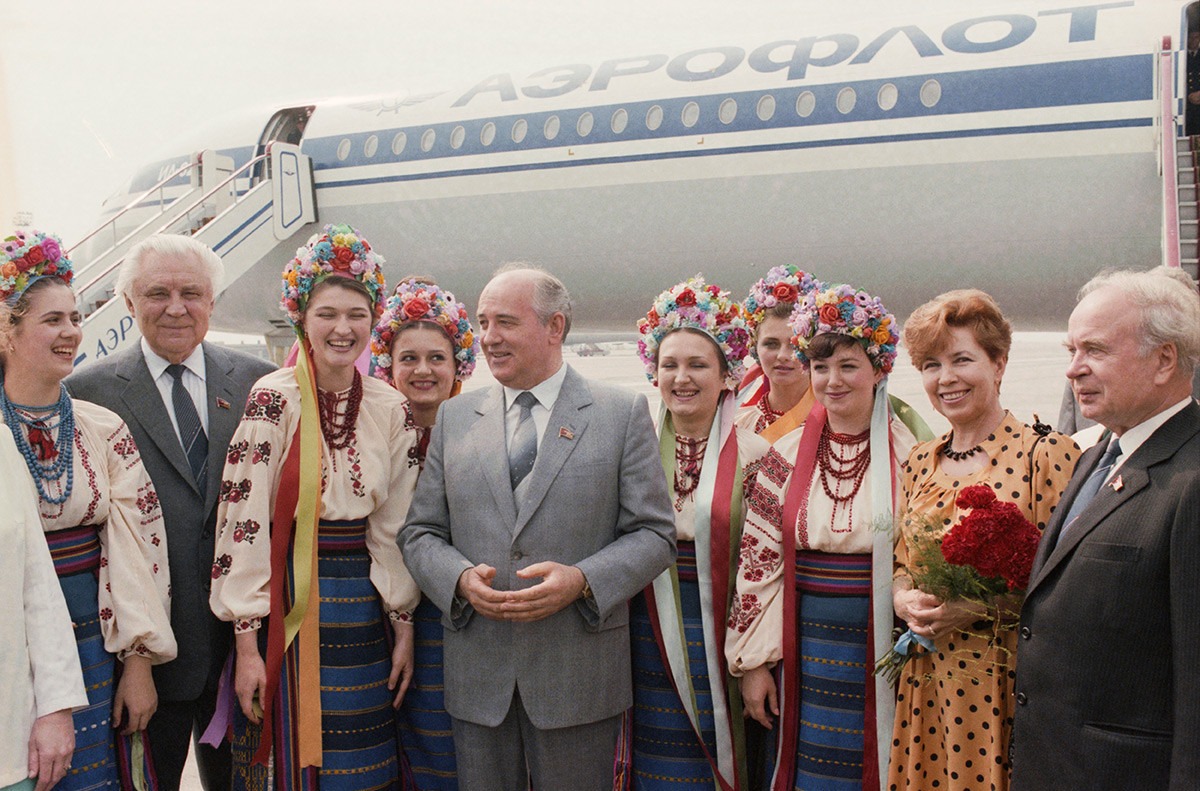 “Agreeing at the time to take up, as it were, the governmental post of General Secretary of the Central Committee of the Communist Party of the Soviet Union, I understood, things can’t go on like this and I will not allow myself to keep this position, if I don’t have support in implementing core changes,” Gorbachev remembered. And change soon followed. 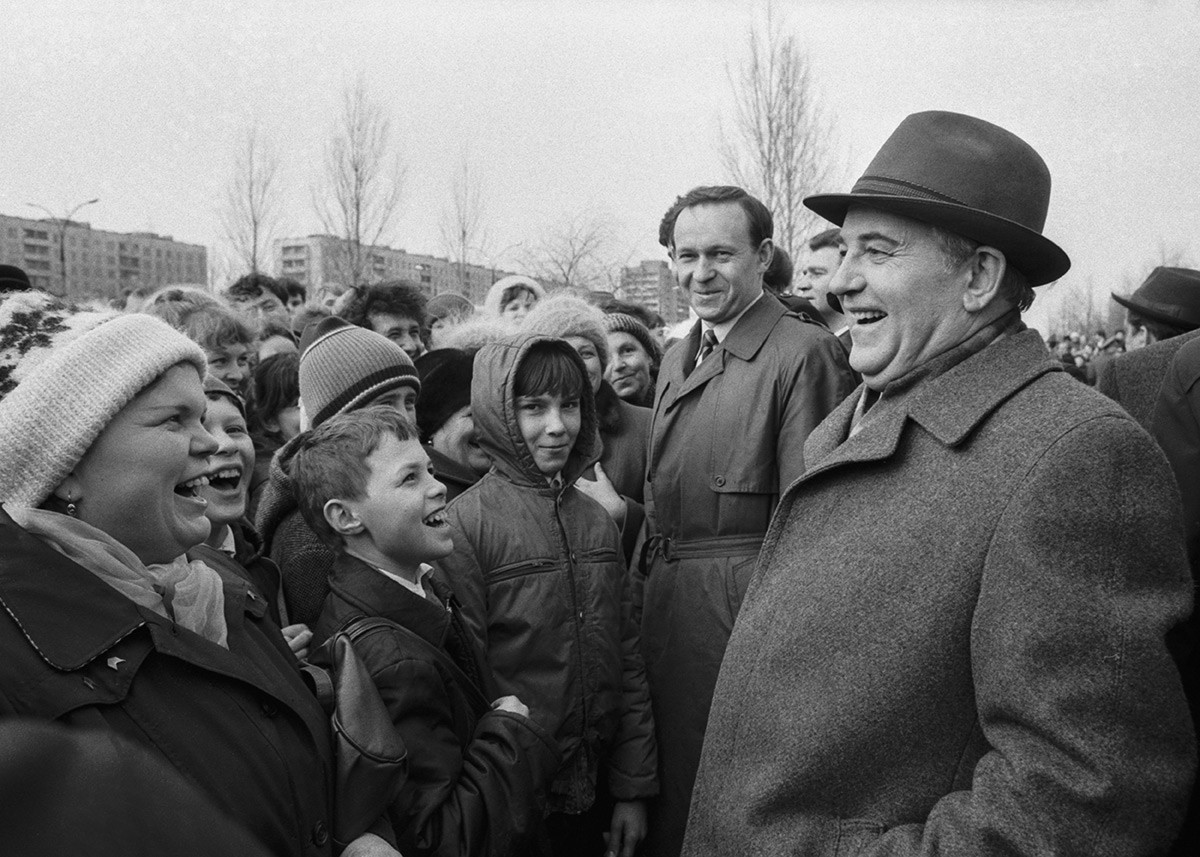 Mikhail Gorbachev and residents of the city in 1986.

The first order of business was to renew “the fight for sobriety” with an anti-alcohol campaign, which was a huge problem for a country practically dying out from vodka and its substitutes. 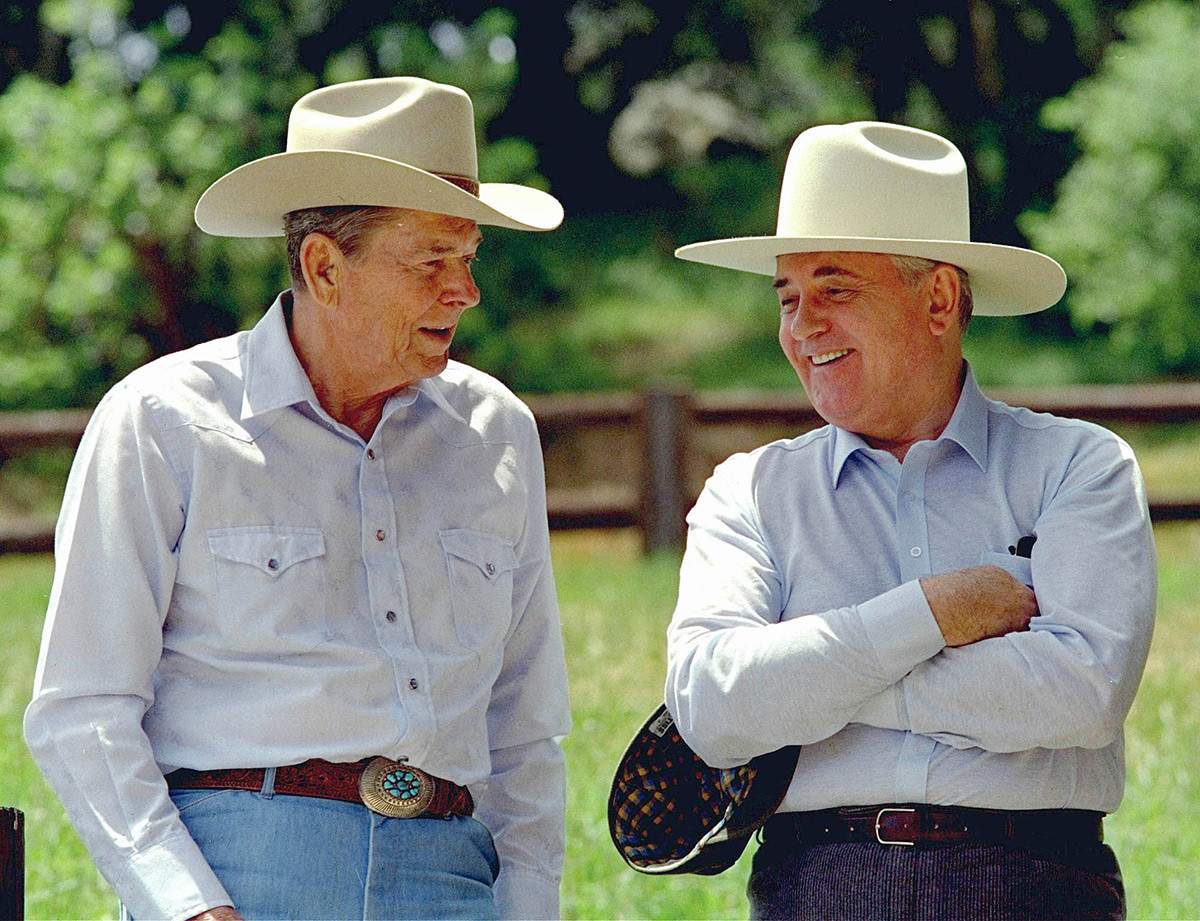 Once at the helm, Gorbachev met with U.S. President Ronal Reagan, marking the first time in many years that the two countries’ leaders shook hands. This was the beginning of the end of the Cold War, as well as nuclear disarmament. A new day was dawning fast. 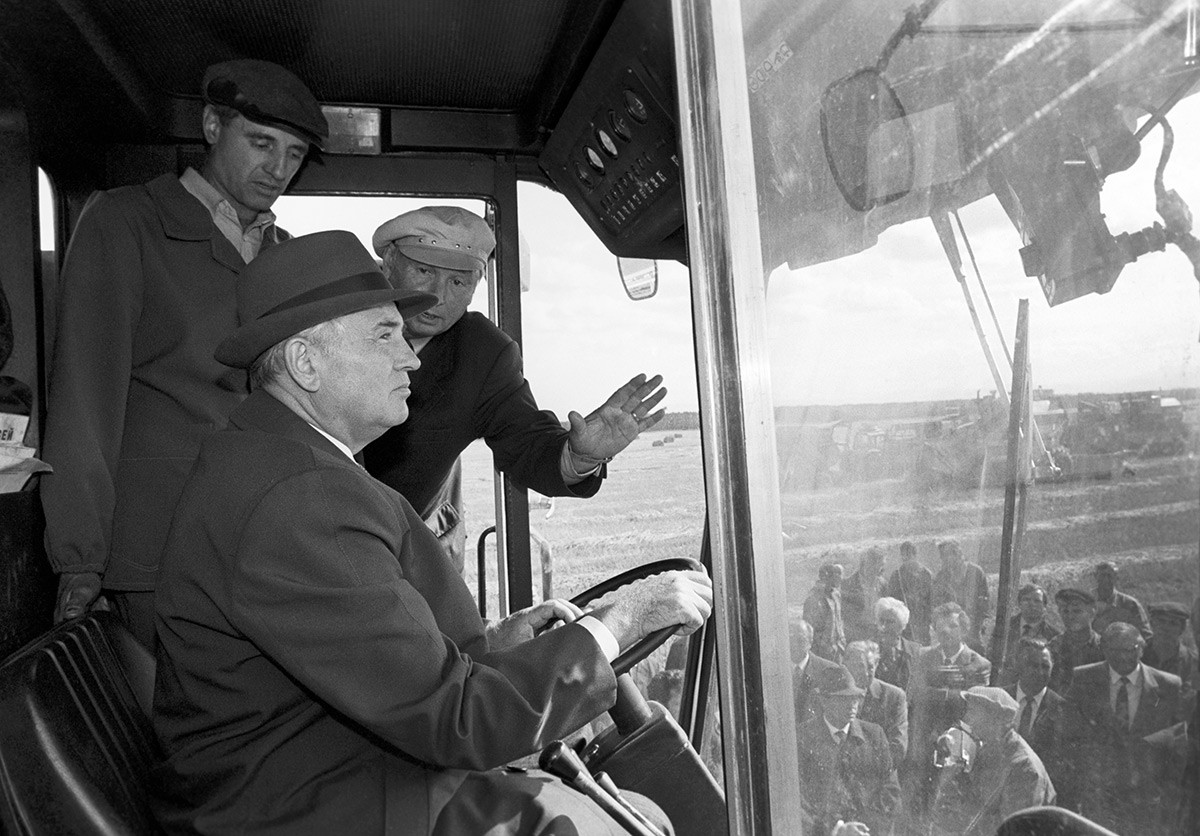 Gorbachev took away the Communist Party’s monopoly on power and began to clean house. Elections were instituted, following in the footsteps of democratic nations. Censorship was eradicated, along with a number of other harmful practices, including a state monopoly on exports. 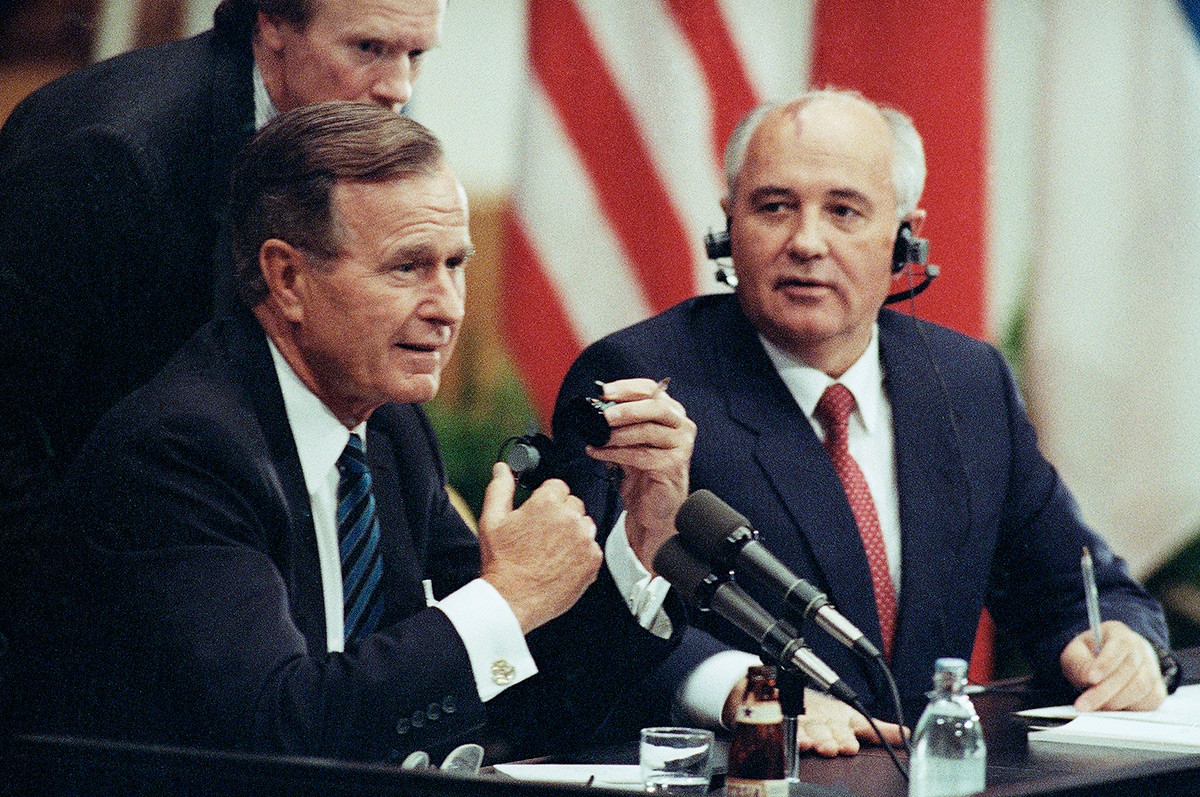 Gorbachev would meet with the American president a number of times. President George Bush would refer to the Soviet leader as “the architect of the perestroika”. 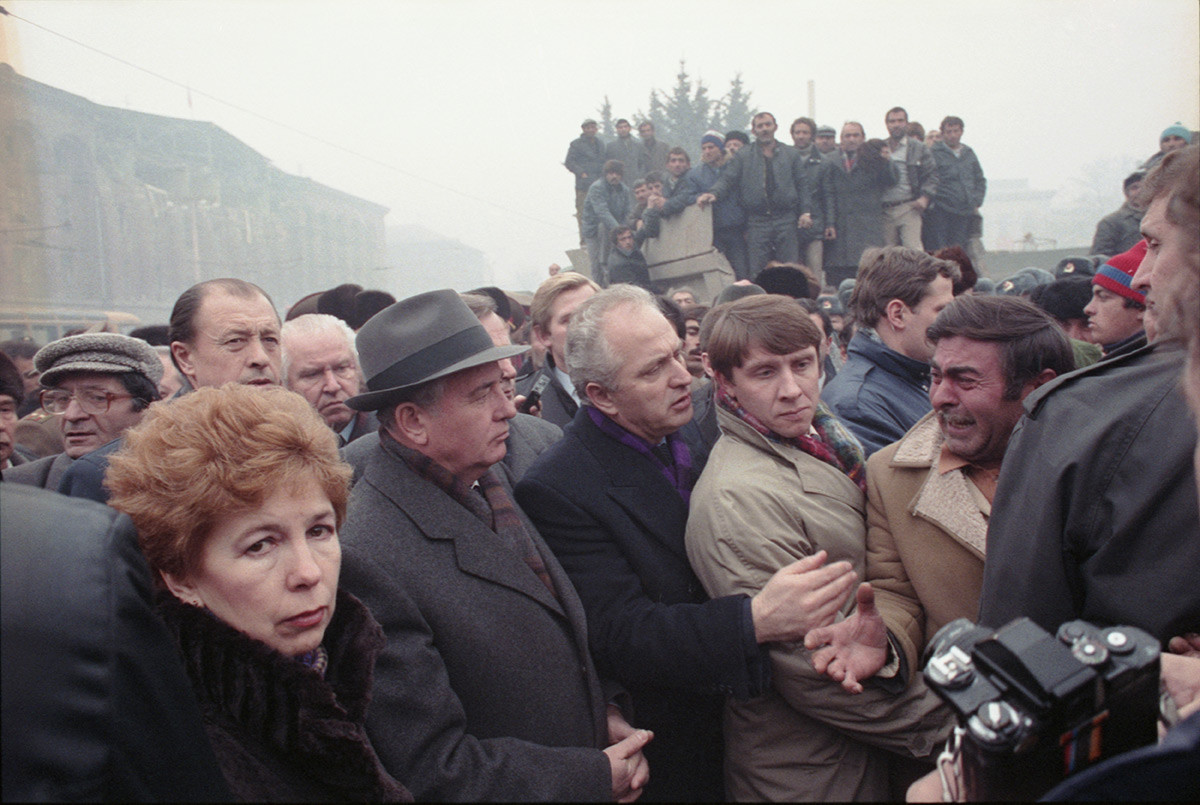 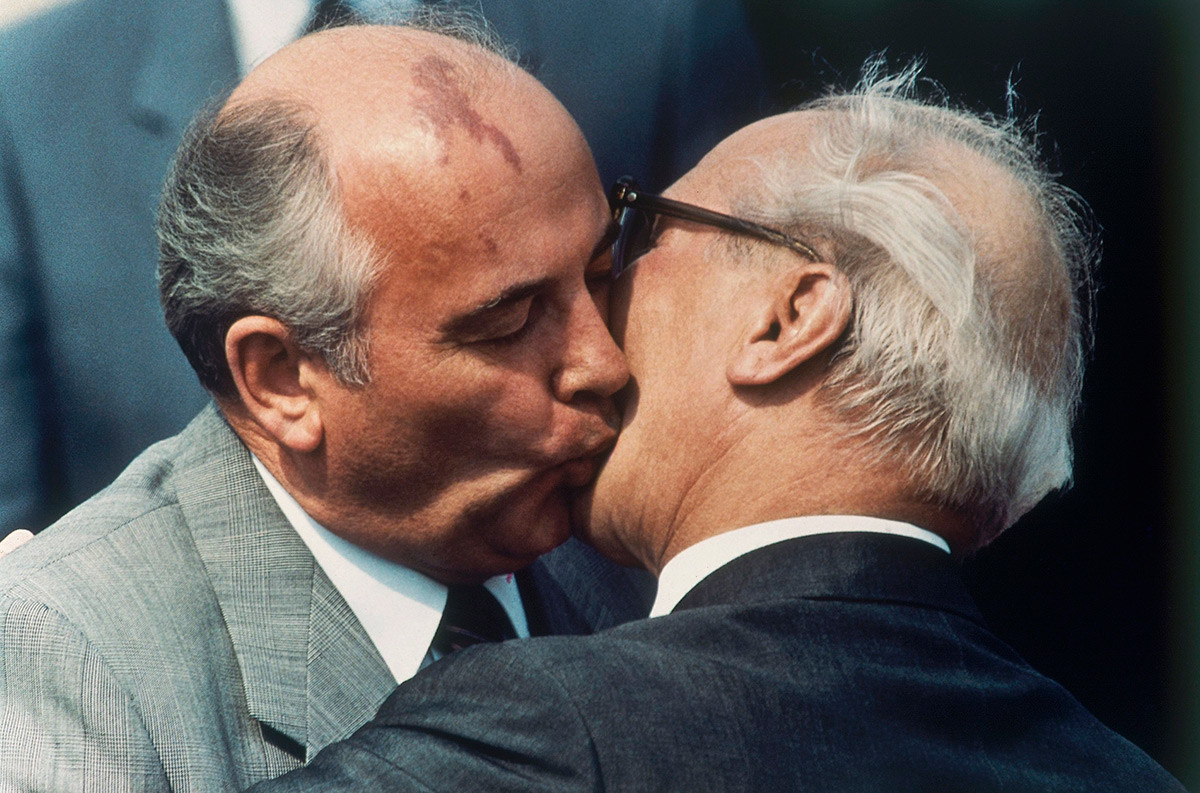 Two years later, he played a key role in German reunification and the fall of the Berlin Wall. In March of 1990, he became the first (and only, as it turned out) democratically elected president of the USSR. 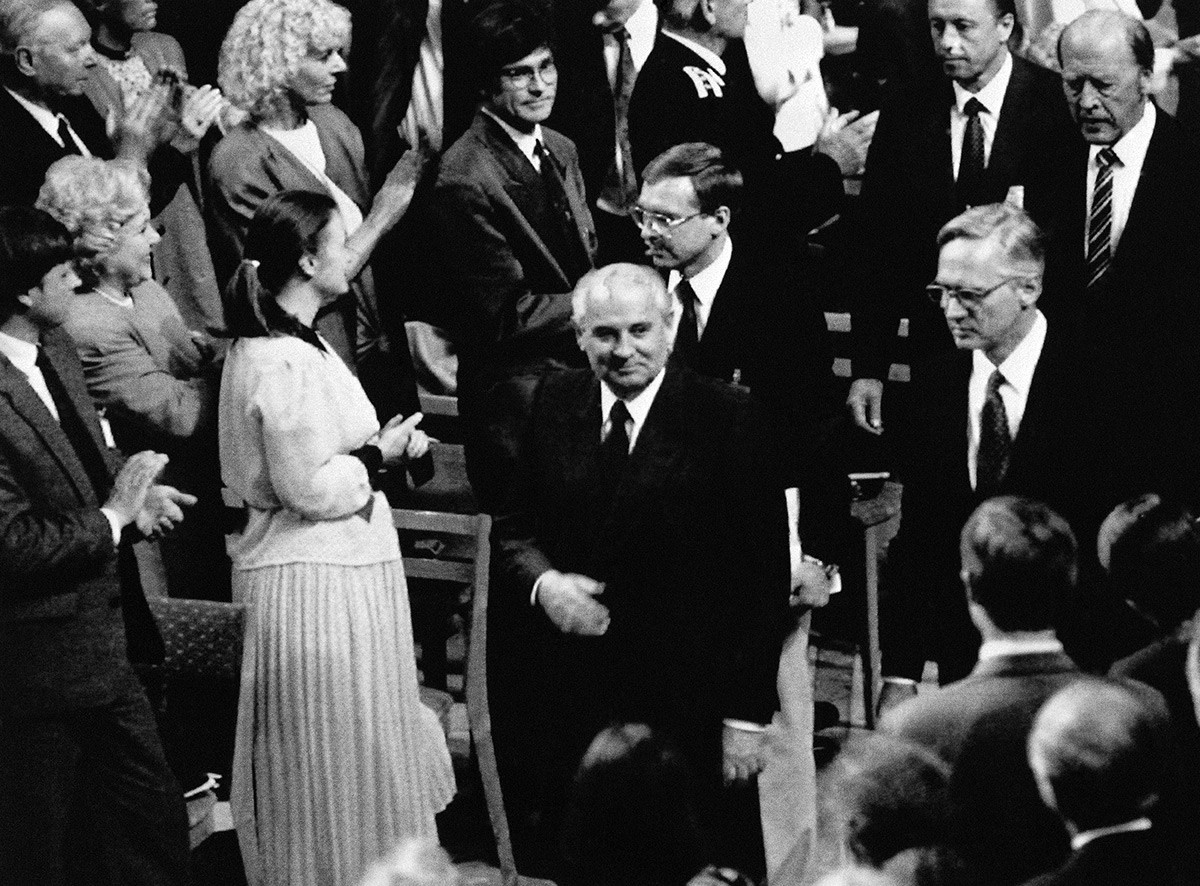 In recognition of his leading role in the peace process, Gorbachev received the Nobel Peace Prize in 1991, forever cementing his legacy. 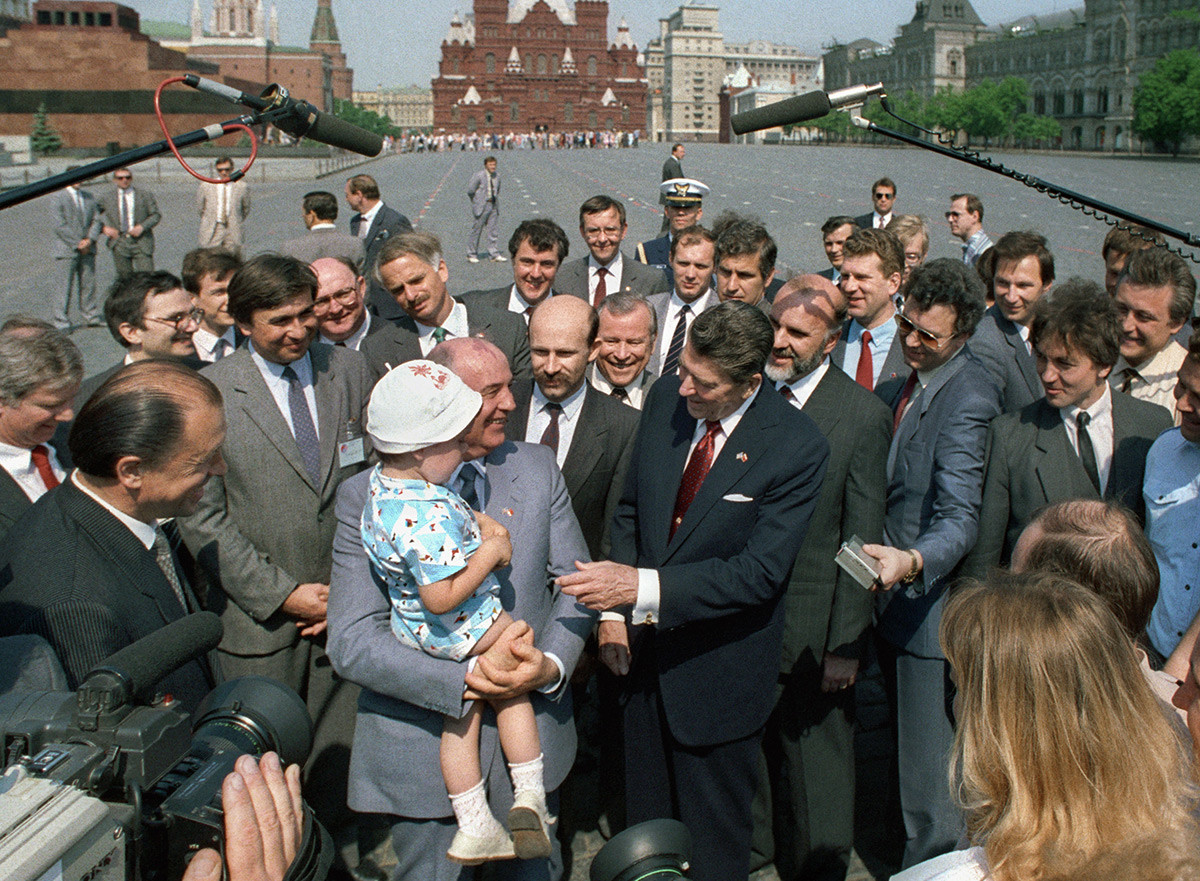 Mikhail Gorbachev and US President Ronald Reagan taking a walk in Red Square in 1988.

However, the policy of non-violence and democratization had other consequences, as well: Gorbachev is still blamed for the ensuing internal conflicts between Soviet republics, resulting in the ultimate breakup of the USSR. 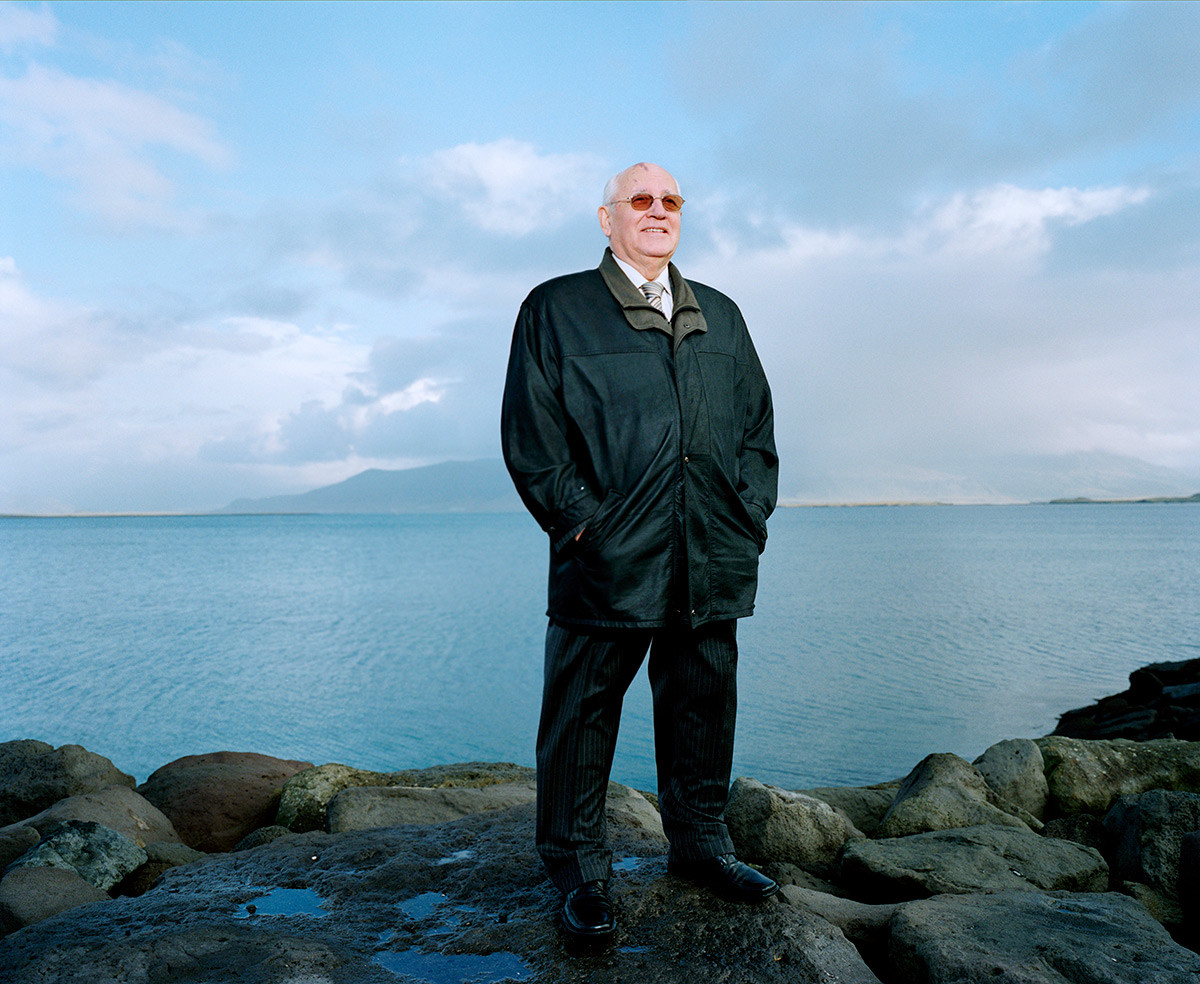 After resigning in 1991, Gorbachev left big politics and set up the Gorbachev Fund and the International Green Cross, strongly opposing the first President of the Russian Federation, Boris Yeltsin. In 2014, speaking in front of MSU students, he admitted responsibility for the breakup of the Soviet Union: “I sought to preserve it, but was unsuccessful… that is my burden to carry. Nobody took me off the job, I left of my own volition, because I just could not manage.”