The FINAL days of Russian tsars 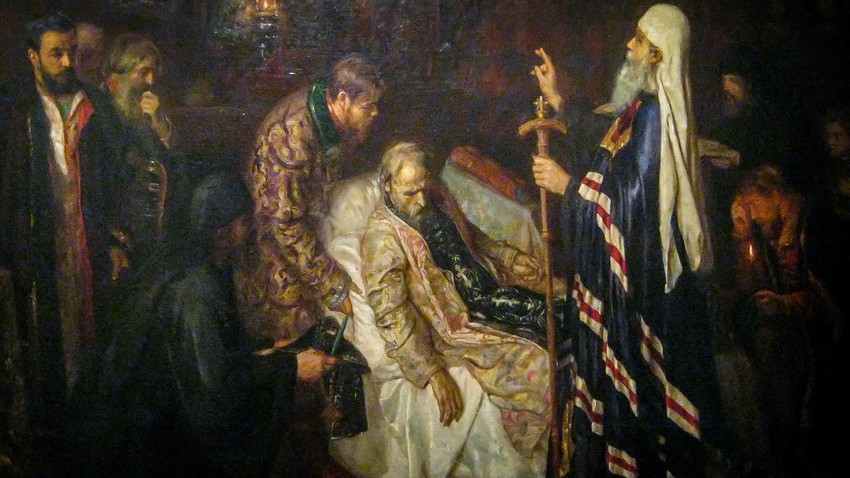 "Before the death of Ivan the Terrible, the Metropolitan ordains him to the Schema" by Pyotr Geller

Pyotr Geller/Russian Museum
How the most important tsars of Moscow left this world – in detail. 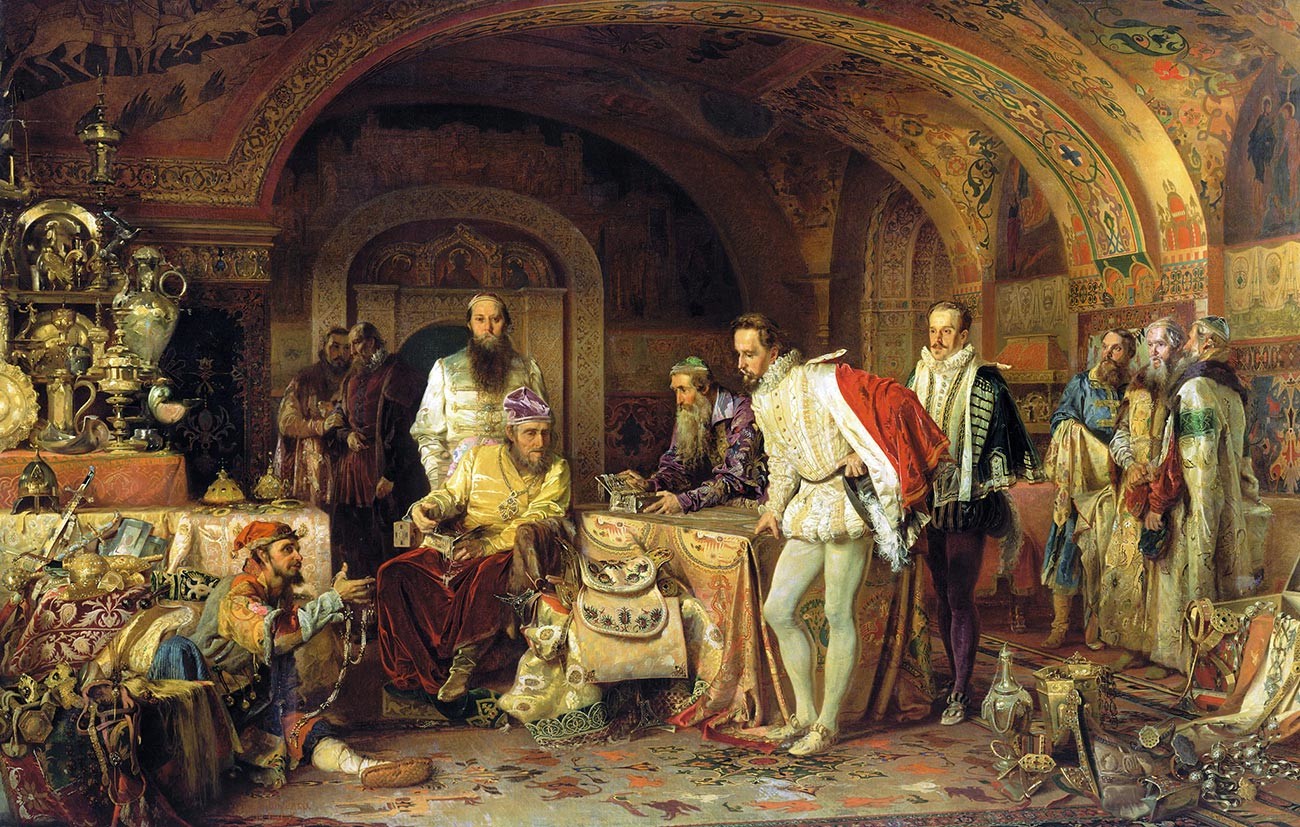 "Ivan the Terrible shows his treasures to the English ambassador Horsey" by Alexander Litovchenko, 1875

On Ivan the Terrible’s last day, March 18th, 1584, English diplomat at the Russian court Sir Jerome Horsey saw the Tsar in his treasury. Surrounded by courtiers, he spoke about the qualities of the precious stones kept there. “This fair coral and this fair turquoise you see; take in your hand; of his nature are orient colors; put them on my hand and arm. I am poisoned with disease; you see they show their virtue by the change of their pure color into pall; this declares my death”.

Horsey also relates that on the day of his death, Ivan sent his favorite Bogdan Belskiy to the sorcerers and witches from the Sapmi region Ivan kept in Moscow to tell him the future. The witches predicted that Ivan would die that day, on March 18. And when Belskiy replied that the Tsar was in good health and spirits, “Sir, be not so wrathful. You know the day is come and ends with the setting of the sun,” the witches said. 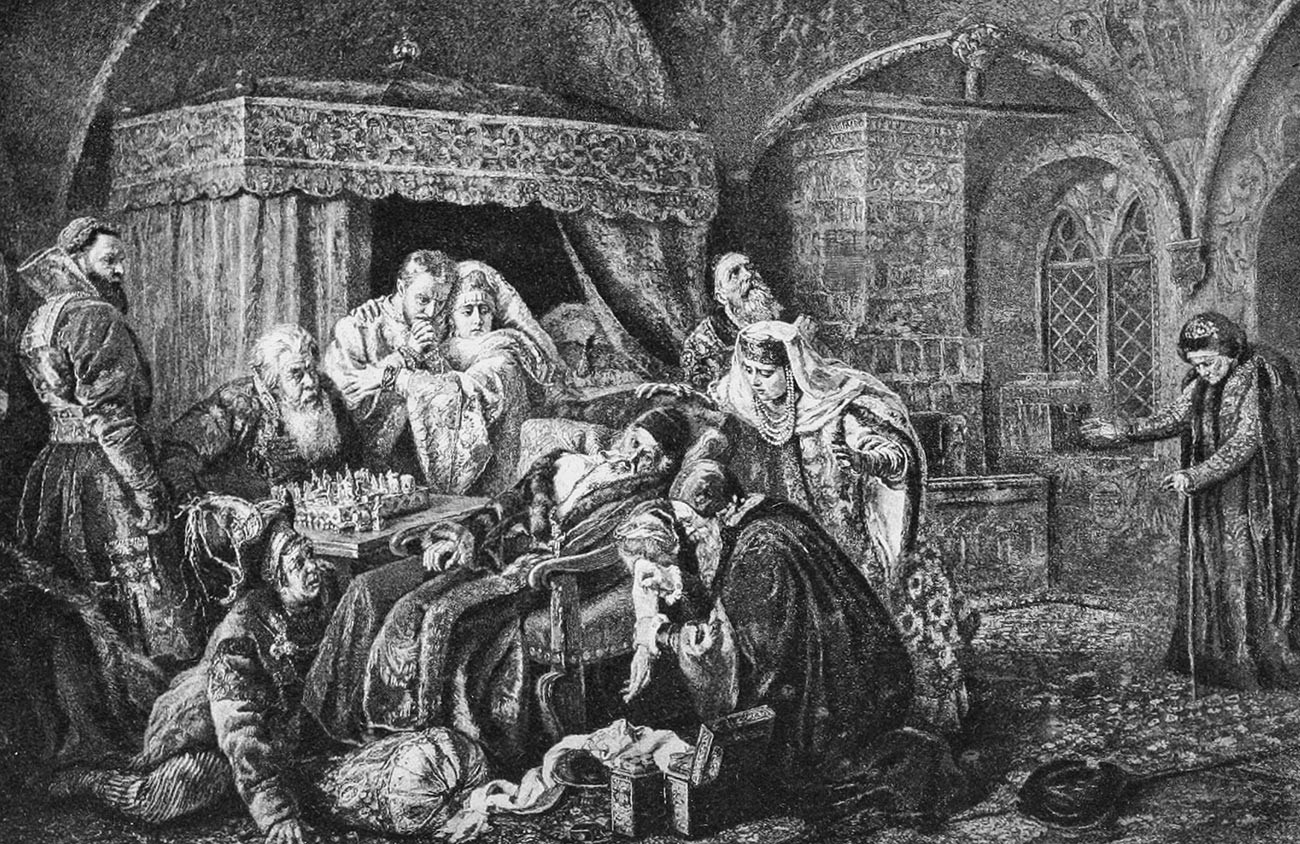 "The Death of Ivan the Terrible" by Konstantin Makovsky

That evening, Ivan took a bath, and his servants heard him sing merry songs in the bath as was his habit. After the bath, he was carried into his room, where he sat in bed and called upon Rodion Birkin, one of his favorites, to play chess with him. A lot of people were present in the room during the game, including Belskiy and the future tsar Boris Godunov. While playing chess, Tsar Ivan suddenly fainted and fell to his back. His physicians were called and pronounced him dead on the spot.

There was much speculation in later centuries about whether Ivan had been poisoned. However, Russian historian Boris Florya notes, this is unlikely. The Tsar died in the presence of a lot of people, so poisoning him on the spot, right before his death, would have been impossible. And if there were any accusations of poisoning right after his death, the Tsar’s physicians would have surely been put to trial – meanwhile, we know that the doctors who treated Ivan freely left Moscow shortly after his death. 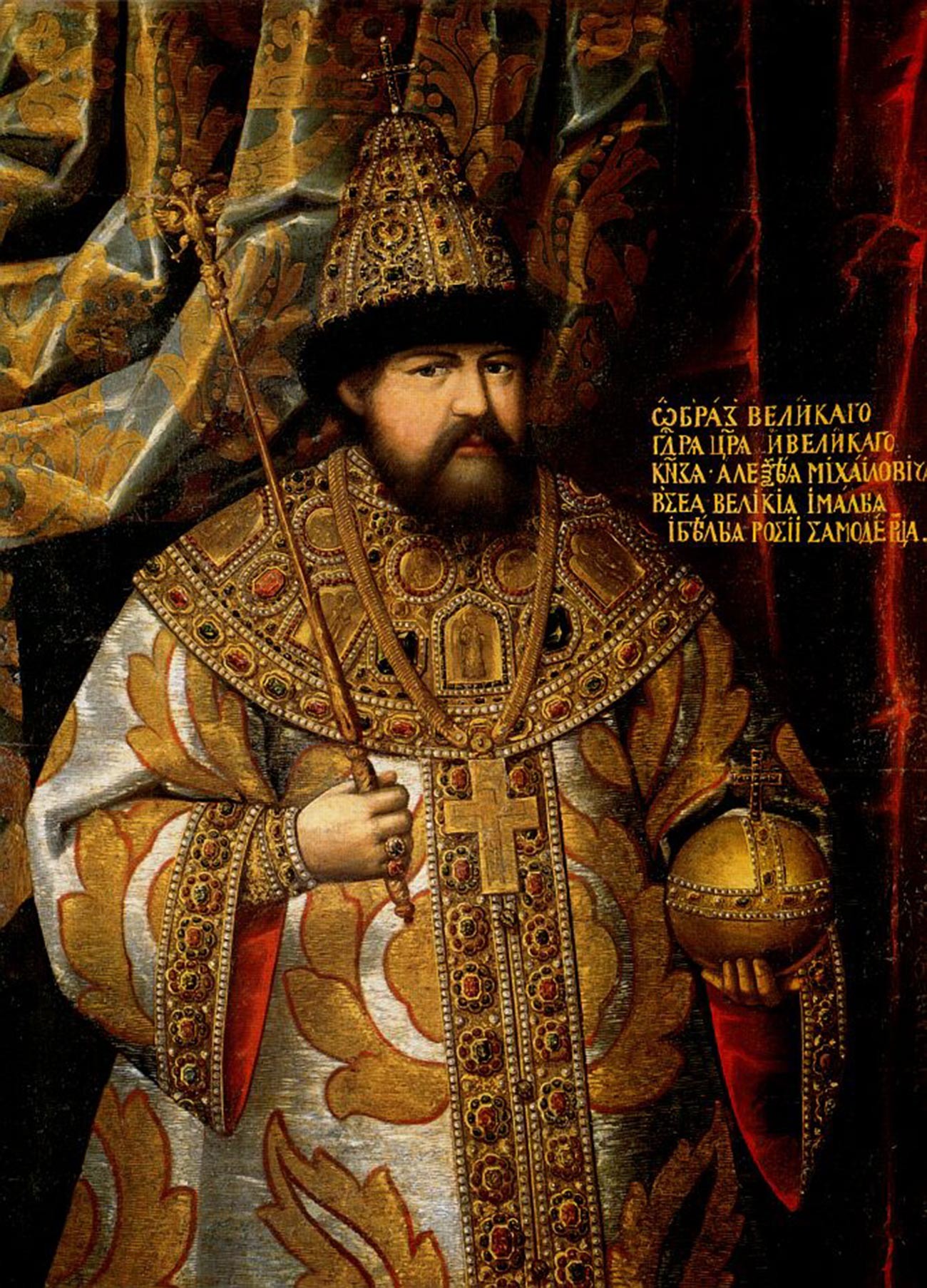 Tsar Alexey Mikhailovich apparently suffered from arterial hypertension all his life. It was considered normal for a Russian man in the 17th century to be overweight – it was considered handsome, as it showed wealth and power. The records say Tsar Alexey was moderate in eating and didn’t drink much wine. But may have just been the official line, because by the 1660s, when the Tsar was in his mid-40s, his obesity had become a problem.

In 1665, Tsar Alexey asked Samuel Collins, his court physician, what could be done to reduce his weight. Collins offered a strict diet – no suppers, only poultry for meat, no pork at all… These very recommendations suggest that really, the Tsar was eating quite a lot.

Tsar Alexey also used bloodletting very frequently – there are numerous accounts of the Tsar having his blood vessels opened and making his boyars do the same. As we know, bloodletting was a popular way of treating high blood pressure. With age, Tsar Alexey used bloodletting more and more. Also, by the 1670s, the Tsar had a big casket of medical herbs brought along with him on all his journeys, be it military campaigns or monastery pilgrimages – although such journeys became less and less frequent, apparently because of his deteriorating health.

Tsar Alexey fell ill in late January 1676. In the beginning, he caught a cold and had a fever. Instead of the usual remedies his doctors offered, the tsar tried to calm the fever by putting crushed ice on his belly. He also ordered ice-cold kvass [a mildly alcoholic brew made from stale black bread] to be brought to him in a ‘unicorn’s horn’ – a cup made out of a narwhal's tusk, with its edges cast in silver. The tsar wanted the kvass so cold that it had pieces of ice floating on its surface and jingling against the silver edges of the horn.

Following a week of such treatment, the tsar’s condition became hopeless. On January 29th, he found the strength to bless his son Fyodor and order a mass amnesty. He died in the early hours of January 30, 1676. 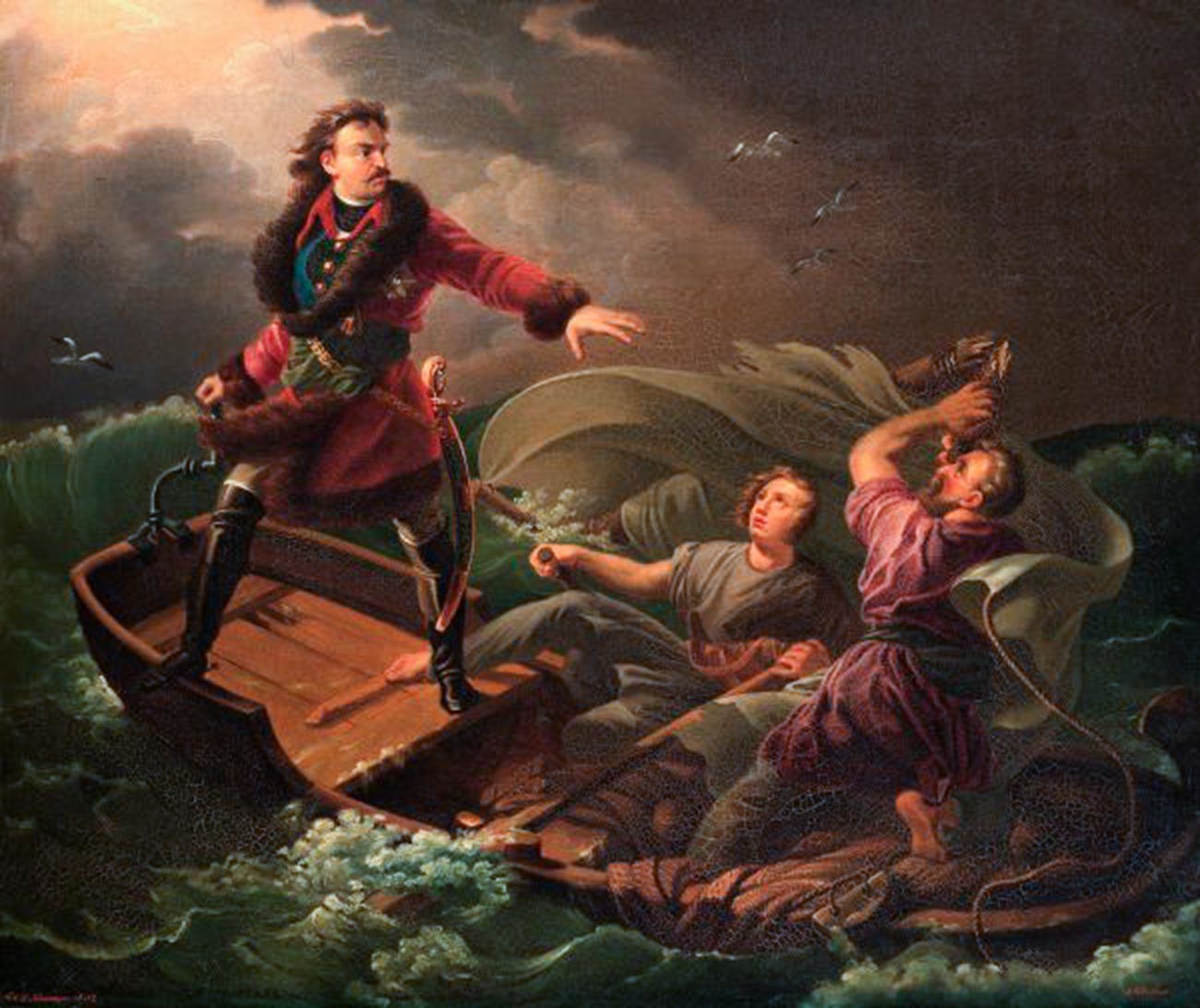 "Feat of Peter the Great in the Storm" by Aleksandr Kotzebue

Peter the Great was at the same time the last Tsar of the Moscow Tsardom and the first Emperor of the Russian Empire. We have already noted that Peter prepared his own burial ceremony long before he died – he wanted to change the procedures for a Russian tsar’s burial completely. But his own death was nevertheless sudden.

At least eight years before his death, Peter started suffering from kidney or urinary disease. Which is not surprising considering his way of life – he drank vodka daily with his meals, and drank copious amounts of alcohol during feasts and celebrations. He ate a lot, which was natural considering his height, and spent a great lot of time on horseback – possible causes for hemorrhoids and varicose veins.

From the late 1710s, Peter regularly visited mineral springs in Europe, which eased his kidney pain. But as soon as he got better, Peter resumed his usual rampant lifestyle. His illness got worse in November 1724, when while traveling along the Finnish Gulf to inspect some ironworks, he allegedly saved a group of soldiers drowning in their boat near the shore. Wading out into near-waist deep water, the Emperor came to their rescue, but days later, fell ill with a bladder inflammation. 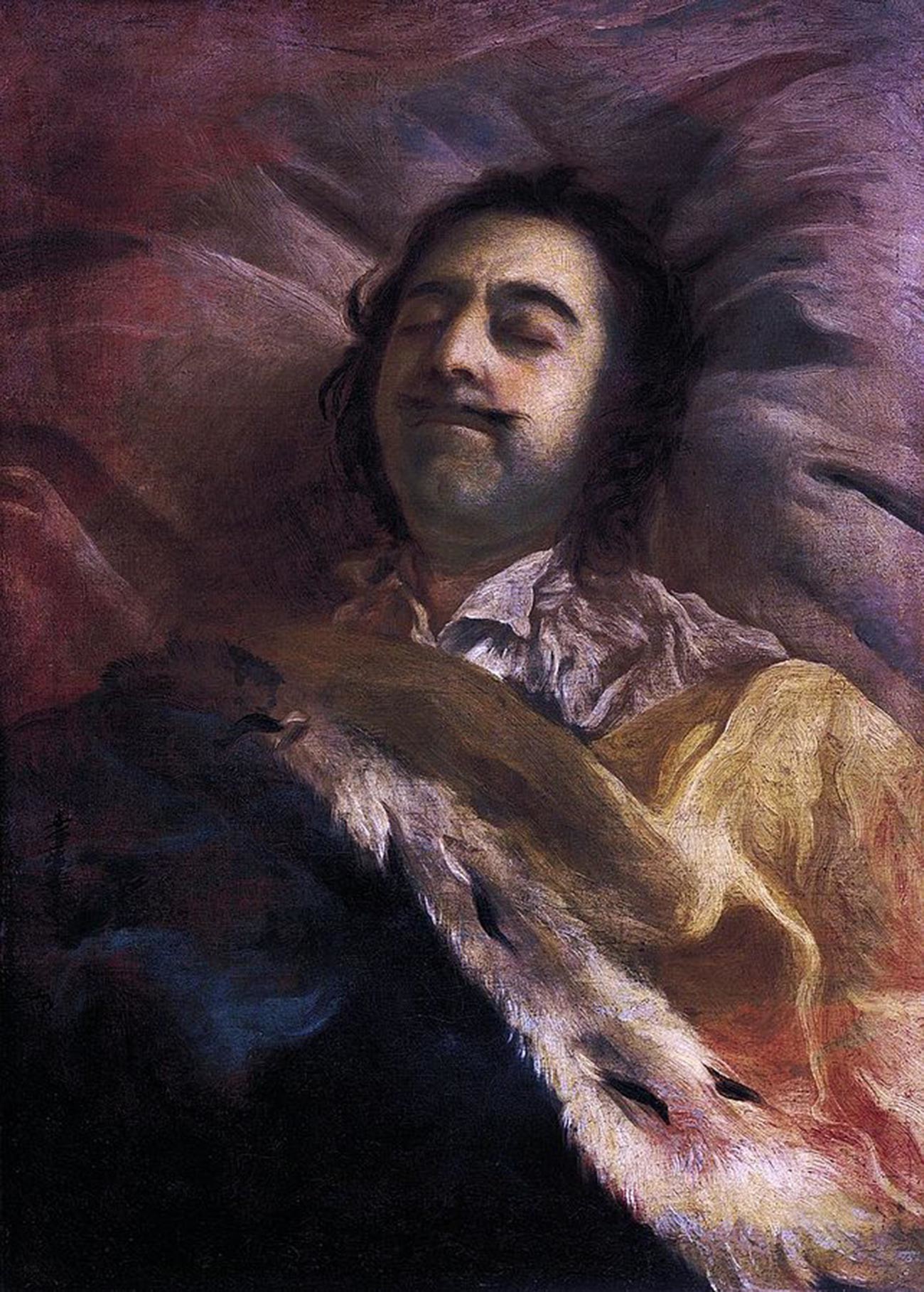 Peter the Great on his deathbed

But in January 1725, Peter, overcoming his disease, commanded the Preobrazhensky regiment in a march on the frozen Neva during the celebration of the Baptism of Jesus. After that, Peter fell ill with a fever again, but recovered quickly. He then turned to celebrating the New Year, drinking with his courtiers in various noblemen’s houses around St. Petersburg.

On January 16th, Peter’s condition worsened. He fell ill again, with high temperature and blood pressure. A heavy urinary tract infection had developed by that time, and the doctors had to cut Peter’s bladder to draw out the pus. In subsequent days, Peter suffered a stroke, which brought partial paralysis and loss of speech – this is why Peter couldn’t make a decision on who inherited the throne. He died, aged 52, in great pain on the morning of January 28th, 1725 in the Winter Palace in St Petersburg.