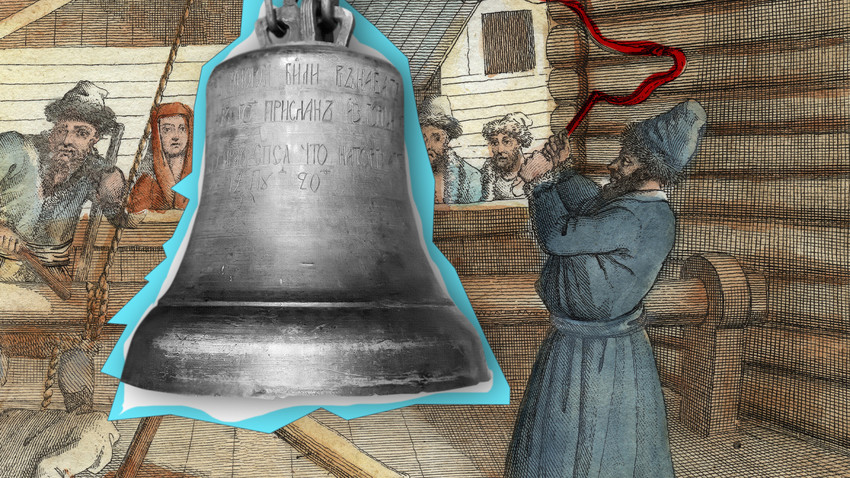 adoc-photos/Getty Images; Legion Media
In Russia, church bells were treated as persons: they had ears, tongues - and names. And, albeit not having their own volition, bells could be… executed and exiled for sounding at the wrong time or for the wrong person.

In 1592, in Uglich, Russia, a strange event took place. A 320-kilogram bell was dragged into the city square. A blacksmith was summoned to tear out the bell’s “tongue” (the internal clapper) and to cut its “ears” (the contraptions the bell is hung onto). After that, the bell was scourged 12 times with heavy whips and sent to exile. About 60 families of Uglich people, which were exiled to Tobolsk, Siberia, dragged the bell with them for about a year.

The Uglich bell was “punished” for sounding the alarm on May 15, 1591, after the murder of Tsarevich Dmitry, Ivan the Terrible’s last son. The bell was punished for sounding this alarm, because it led to a riot, with several people, including military men from Moscow, having been killed by the crowd. But why execute a bell? 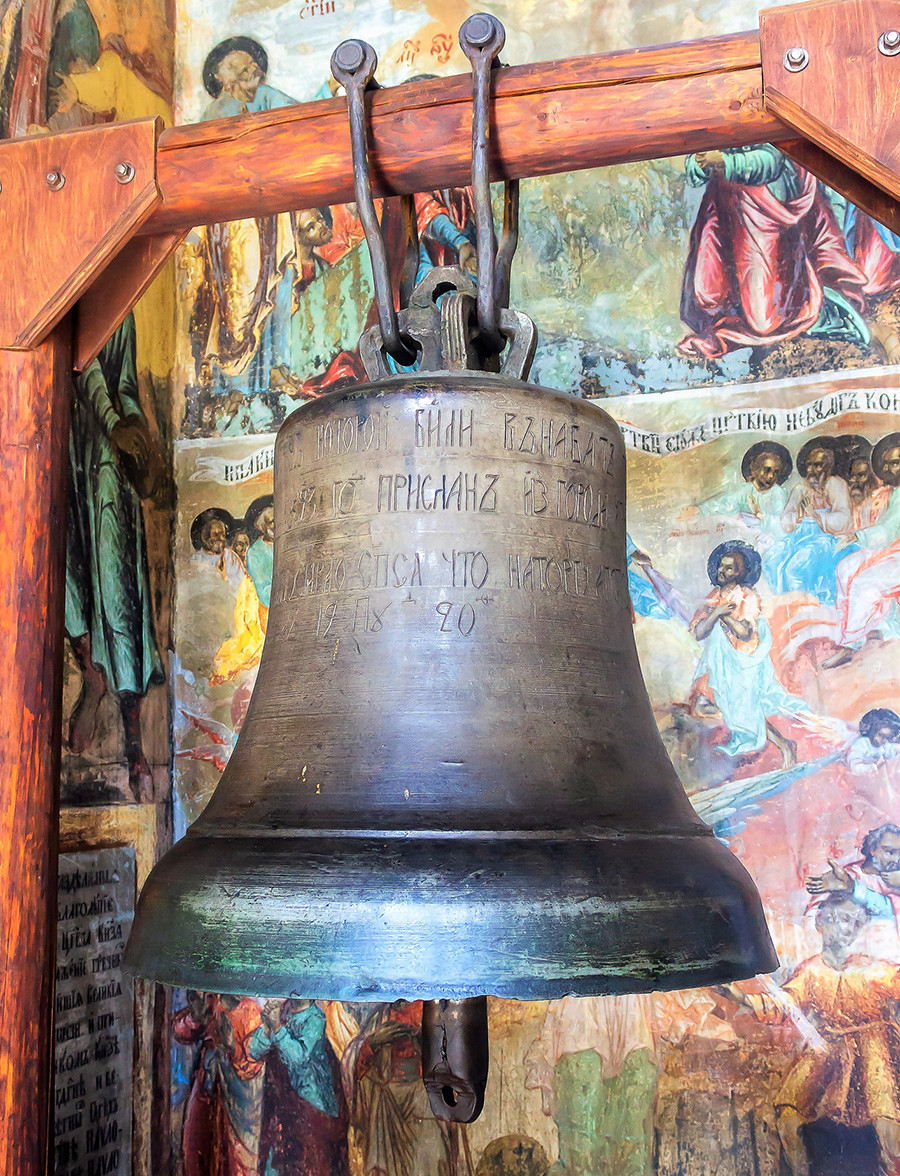 The Bear, The Sovereign, The Hum, The Overtalker – Russians indeed believed that bells had souls and so, must have names. A church bell was indeed a prominent “citizen” of any Russian village. Not only loud, but substantial, a bell’s sound could be heard from very far away. The bells called to church, marked holidays, indicated the way to those lost in a snowstorm, warned of enemy attacks, fires, heavy weather and even vermin invasions. Bells sounded when a person was born or was buried.

Producing a bell was an expensive and complicated task and a bell had a long life; it could change “vocations” – be a town bell, a church bell or a fire alarm bell and change locations as well – just as a person. And, accordingly, parts of the bell’s body were named after human parts: a Russian bell also has a head, a waist, a lip, a tongue, and ears.

The Uglich bell was not the only executed bell in the Russian history. Here are some other examples.

In 1327, people of Tver started an uprising against the Mongol-Tatar tax collectors. A lot of Mongol-Tatar infantry and merchants were killed. The uprising was violently suppressed by Mongol-Tatar forces led by Ivan Danilovich Kalita (1288-1340), a Muscovite Prince who used Mongols to defeat the princes of Tver.

Tver and the neighboring villages were burned and the riot suppressed. After that, Ivan Kalita took down the bell from the bell tower of the Transfiguration Cathedral in Tver, the bell that had summoned the people of Tver to the uprising. As punishment, the bell was transported to Moscow and molten down. 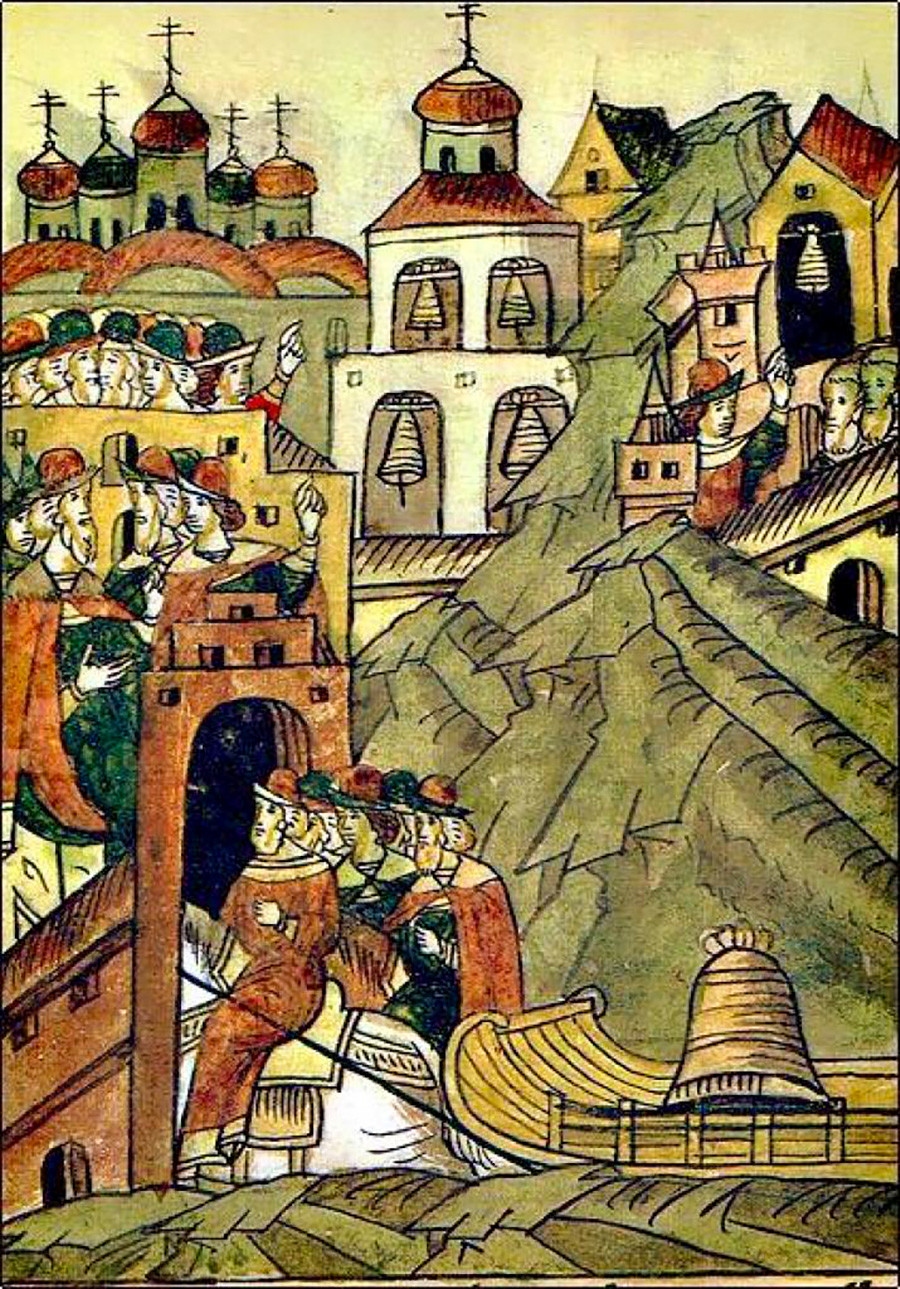 The Novgorod bell, tied up in knots, being taken from Novgorod to Moscow. From the Illustrated Chronicle of Ivan the Terrible (1568-1576).

In the Novgorod Republic (1136-1478), the highest legislative and judicial authority belonged to the veche, an assembly of citizens. In the independent republic, this assembly was more important than a prince. The veche had its own bell – it was placed not in a bell-tower, but in a zvonnitsa, a wooden belfry that could be operated from the ground.

In 1478, Grand Prince Ivan III of Moscow conquered Novgorod and destroyed the republic. He ordered to take down the veche bell, which was then tied up in ropes (as a prisoner) and taken away, to Moscow.

There are various versions of the bell’s later history. Some sources say it served as an alarm bell in the Spasskaya Tower of the Moscow Kremlin. There is, however, a legend that upon reaching the border of the Novgorod land on the way to Moscow, the bell rolled down the hill and “killed itself”, cracking against the rocks. 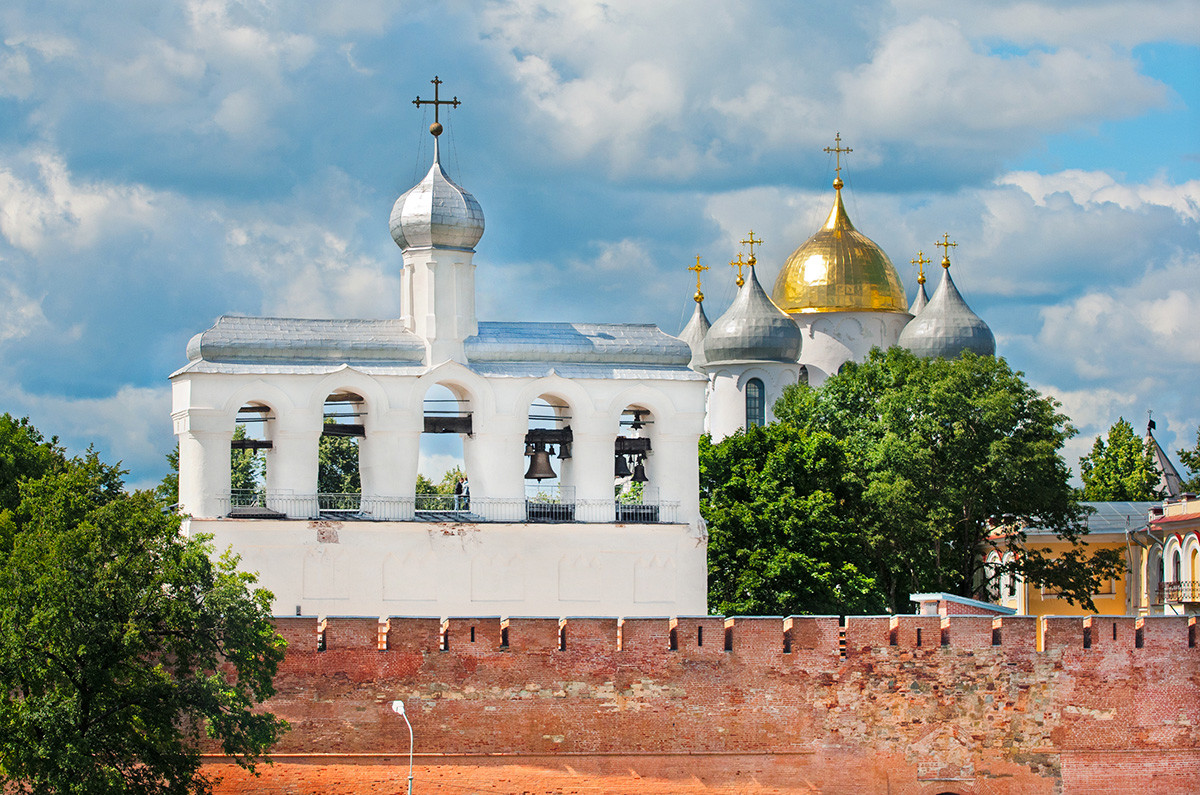 The same fate befell the Pskov veche and its bell in 1510, when Grand Prince Vasiliy III of Moscow (father of Ivan the Terrible) made Pskov people swear allegiance to Moscow. About 300 most important Pskov families were then relocated to Moscow.

In the morning of January 13, 1510, the veche bell was taken down and executed: its ears were cut and tongue torn out.

4. The bell that woke up Tsar Fyodor 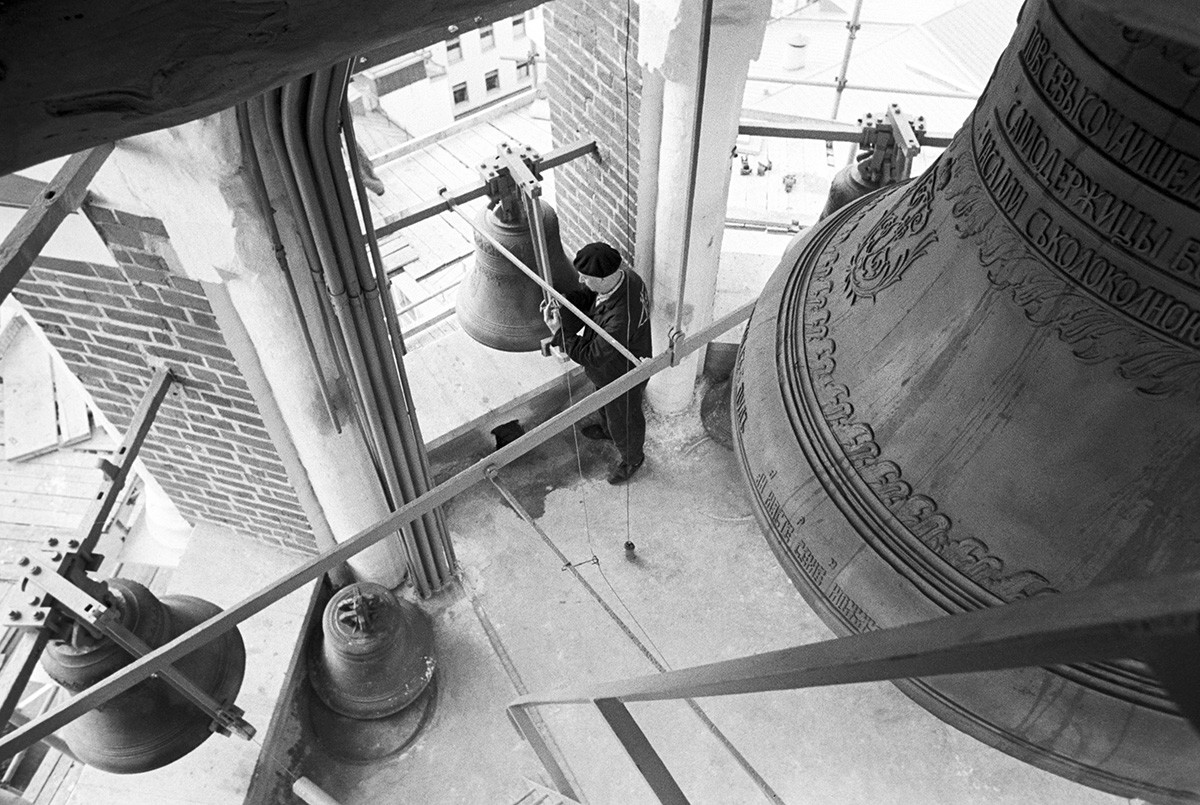 There is a legend that a bell in the Moscow Kremlin was once punished for waking up the Tsar! In 1681, Tsar Fyodor, who by that time was in poor health, woke up at midnight, because of the signal bell of the Moscow Kremlin. Tsar was enraged and the bell was exiled to Nikolo-Korelsky Monastery in Arkhangelsk Region – that’s how the rumor went.

However, the legend doesn’t mention any punishment for the bell-ringer. In the Nikolo-Korelsky monastery, there is indeed a bell that was used as an alarm bell in the Spasskaya Tower of the Moscow Kremlin. It was taken down during the reign of Alexey Mikhailovich (1629-1676), because the tsar didn’t like its tone. Under Fyodor in 1681, the 2,5-ton bell was sent to the Nikolo-Korelsky monastery as a donation. The bell bears an inscription that says that it was brought on March 1, 1681, “for the Tsar’s prolonged health and for the eternal remembrance of his revered parents”. 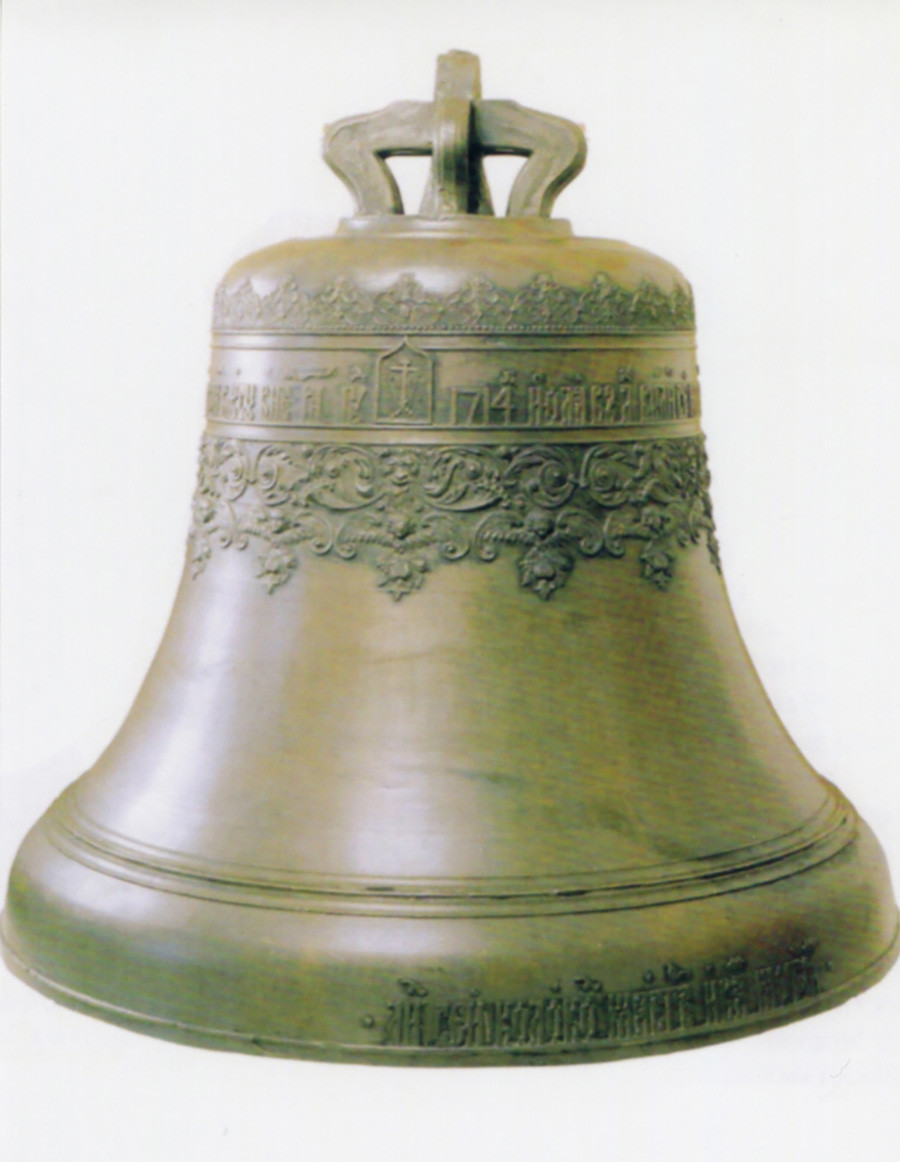 An example of how bells were made in Russia – the bell created by Ivan Motorin, 1714.

In 1771, the Plague Riot happened in Moscow: Archbishop Ambrose (1708-1771) was murdered and the Kremlin plundered. After the riot was strictly suppressed by the army, Catherine the Great, enraged with the fact of Moscow citizens’ disobedience and the general chaos, used the ancient Russian symbolic act of executing a bell: the tongue of the alarm bell of the Spasskaya Tower was taken out. Without the tongue, this bell hung in the Tsar’s Tower until 1803, when it was sent to the Kremlin Arsenal.

So, what happened to the Uglich bell? 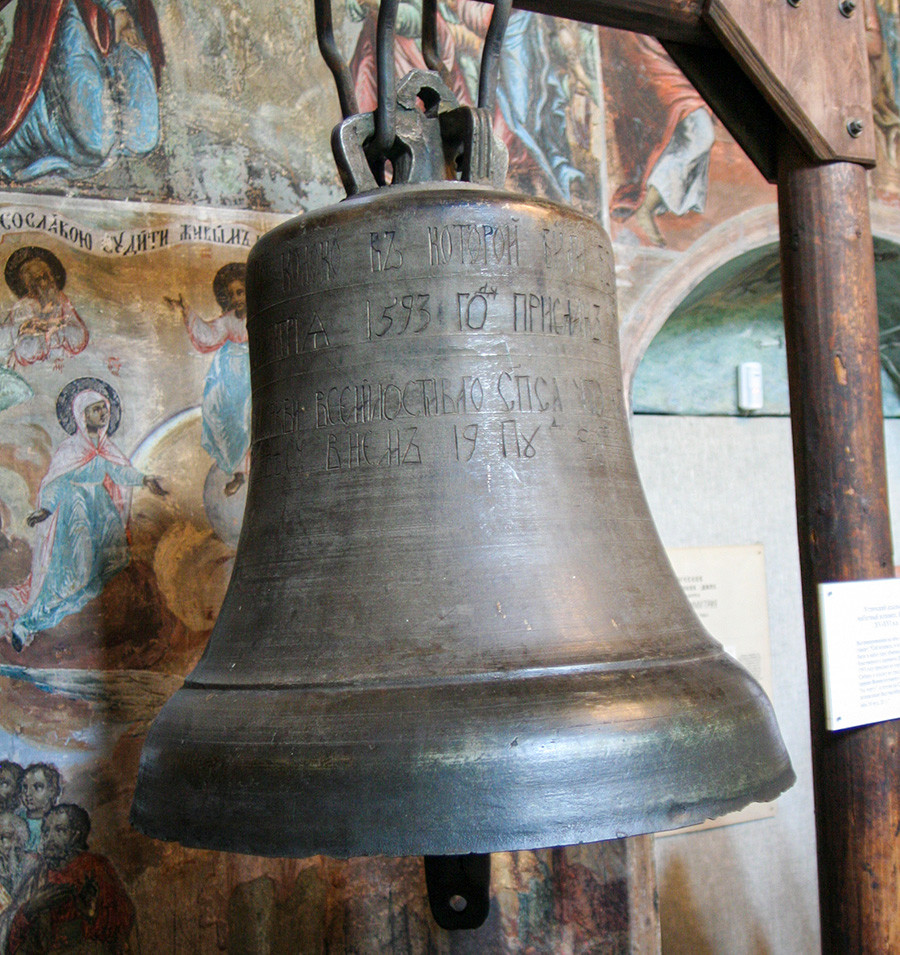 The Uglich bell. Note the damaged lower edge, the 'lip.'

Upon its arrival to Tobolsk in 1593, the local authorities locked it up in a cell and made an inscription on it: “The first inanimate exile from Uglich”. Years later, the bell got to the bell-tower of the St. Sophia Cathedral, where, because of its sharp and loud tone, it was used to mark the time and as a fire alarm.

The bell stayed in Tobolsk and, in 1869, was studied and described. It was found to be 319,41 kilograms, with walls 5,6 centimeters thick, and its “lip” (lower edges) seemed to be gnawed, which indicates that it was repeatedly raised and lowered from the bell towers and transported, while handling it not too carefully.

In 1892, at the behest of Emperor Alexander III and to mark the 300th anniversary of the bell’s exile, it was ‘“pardoned”. A delegation of Uglich people took the bell back to Uglich, where it has been kept ever since.