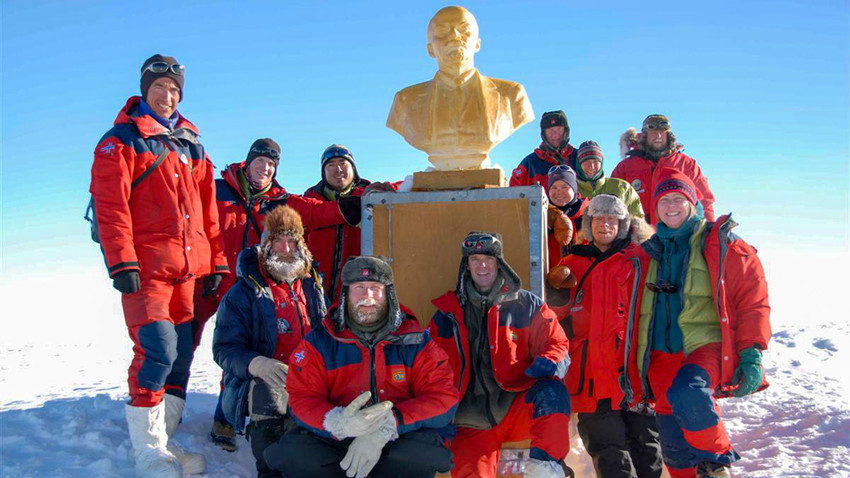 On January 19, 2007, the N2i team, consisting of British and Canadian explorers, reached the southern pole of inaccessibility and saw a bust of Lenin on the spot, protruding from the snow. As it happens, the British team actually discovered an old Soviet station buried under a thick layer of snow.

Decades ago, on 14 December 1958, a Soviet expedition led by Russian polar explorer Yevgeny Tolstikov reached the so-called point of inaccessibility in Antarctica. The term refers to the continent’s furthest point from all directions from the surrounding seas. It is the center of an imaginary circle that can be drawn with a maximum possible radius but without touching any of the coastlines. The point of inaccessibility is therefore the furthest location of the continent from any shore that is therefore also the hardest to reach, especially on the uninhabited continent like Antarctica.

The Soviet expedition to the pole of inaccessibility in 1958 was the USSR’s response to the Amundsen-Scott station that the U.S. built on the South Pole two years earlier in 1956. To counterbalance the success of the Americans in Antarctica, the Soviet Union’s third Antarctic expedition, consisting of 18 scientists, arrived at the continent’s pole of inaccessibility by tractors. 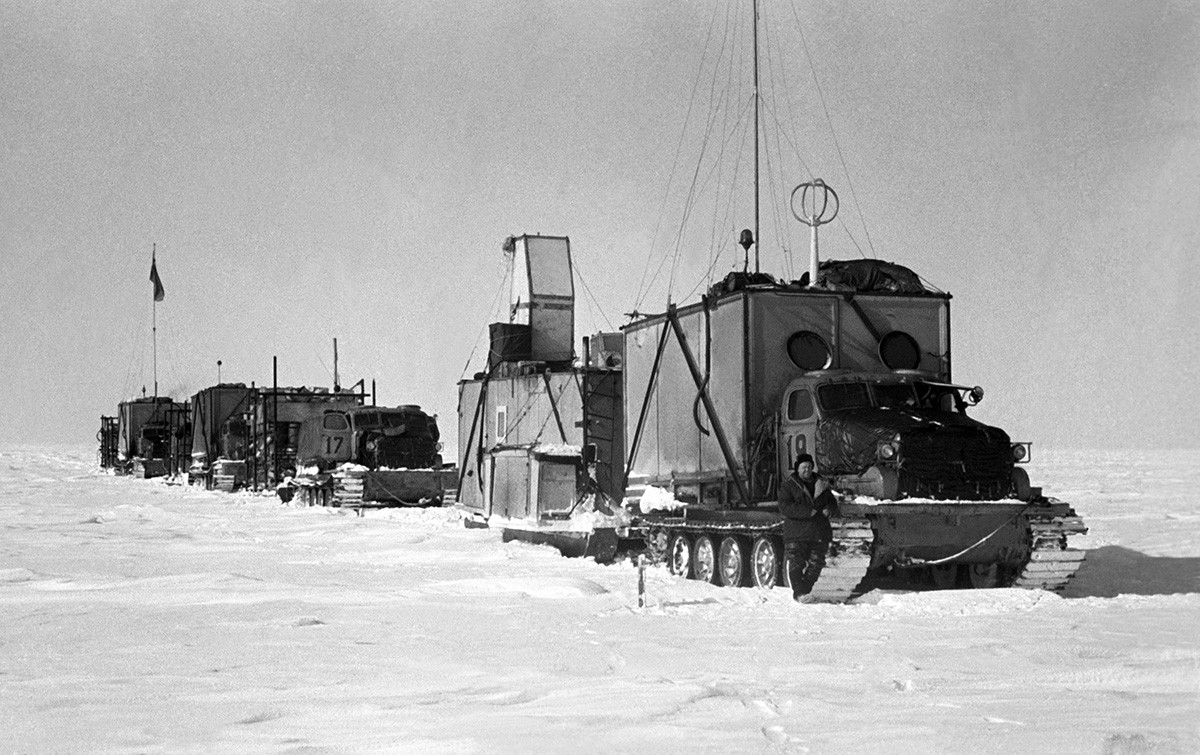 Antarctica. 1959. A view shows the sledge-tractor train of the Third Soviet Antarctic Expedition.

Among other equipment, the Soviet team carried a portable preassembled 260-square foot hut with them. The hut was equipped with an electric furnace and an oil stove, a generator and a radio. But, most importantly, it turned out, the team was also carrying a bust of Lenin, which the explorers mounted on top of the hut they set right on the point of inaccessibility. 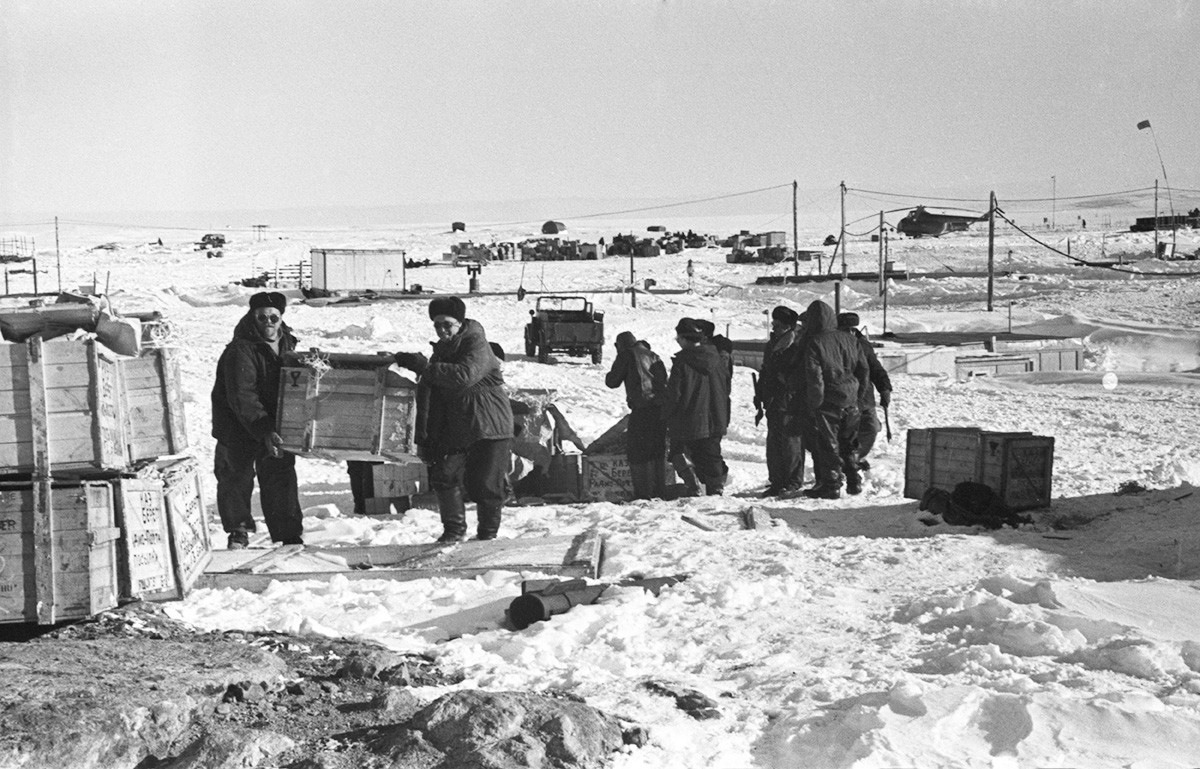 The Soviet expedition to the pole of inaccessibility in 1958 was the USSR’s response to the Amundsen-Scott station that the U.S. built on the South Pole two years earlier in 1956.

The Soviet expedition had decent food and fuel reserves, but it left after 12 days anyway, leaving the facility, provisions and Lenin’s bust behind to provide refuge and some help to any daredevils who would attempt to conquer the hard-to-reach place in the future. The Soviets also left a note inviting future visitors to use the hut and the provisions. 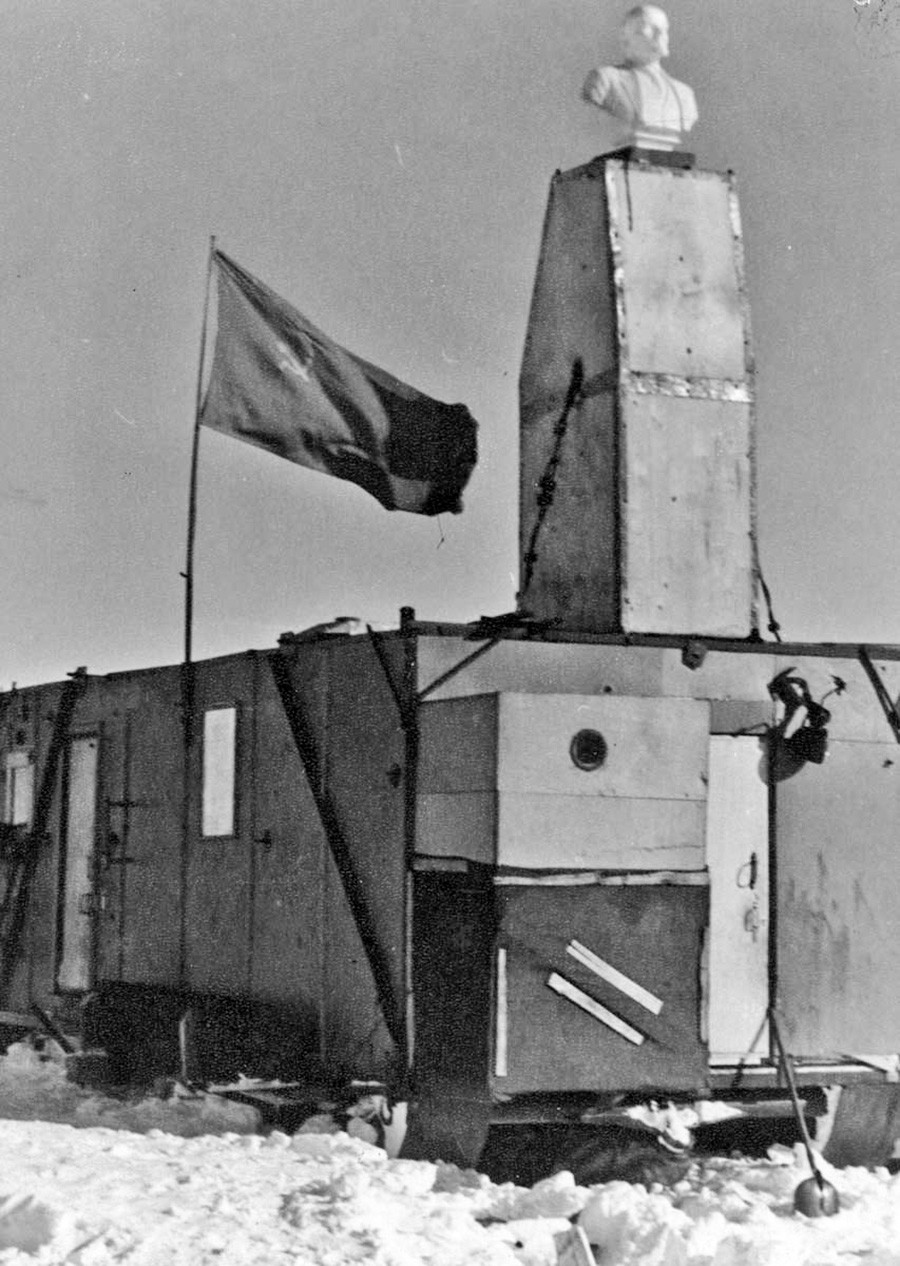 The Soviets also left a note inviting future visitors to use the hut and the provisions.

Decades later, Lenin’s bust would become a subject of amusement to rare explorers who managed to reach the continent’s most inaccessible place.

In addition to being the most remote location on the unwelcoming continent, Antarctica’s point of inaccessibility also happens to lie 3,700 meters above sea level. This contributes to the harsh conditions in this forsaken place: the average year-round temperature is an astounding -58.2°C (-72.8°F).

The harsh conditions ensured the Soviet hut would not be frequented by explorers all that often. Yet, a few people wandered in occasionally. 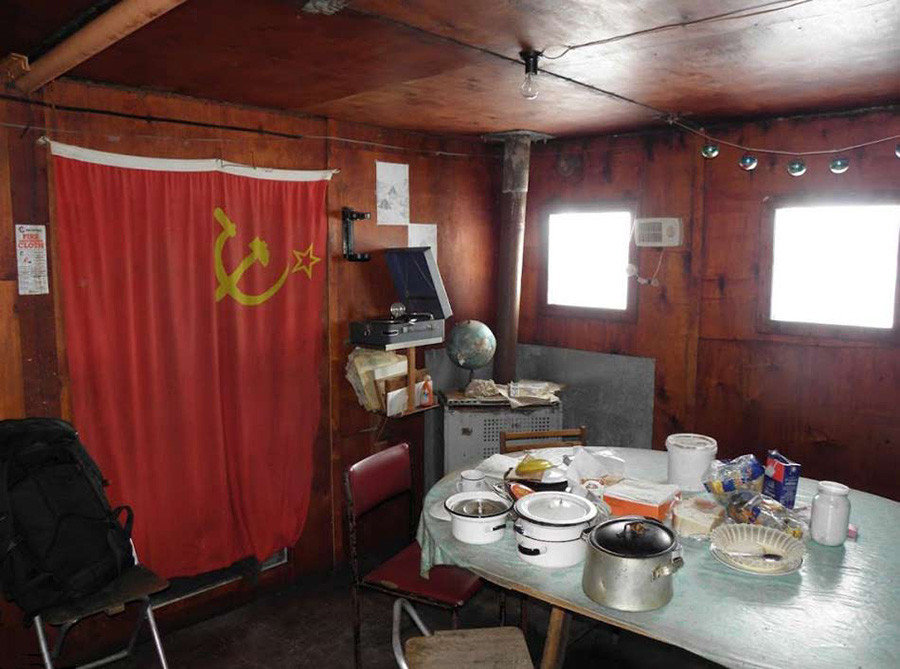 Supposedly, this is the hut interior, as seen by the team preparing to depart on leg 2 of the South Pole-Queen Maud Land Traverse in 1965-66.

In 1965, a group of American explorers reached Antarctica’s point of inaccessibility as part of the Queen Maud Land Traverse expedition. Upon discovering the Soviet hut with the bust on top of it, the Americans reportedly repositioned Lenin’s bust so that it faced Washington D.C. instead of Moscow. 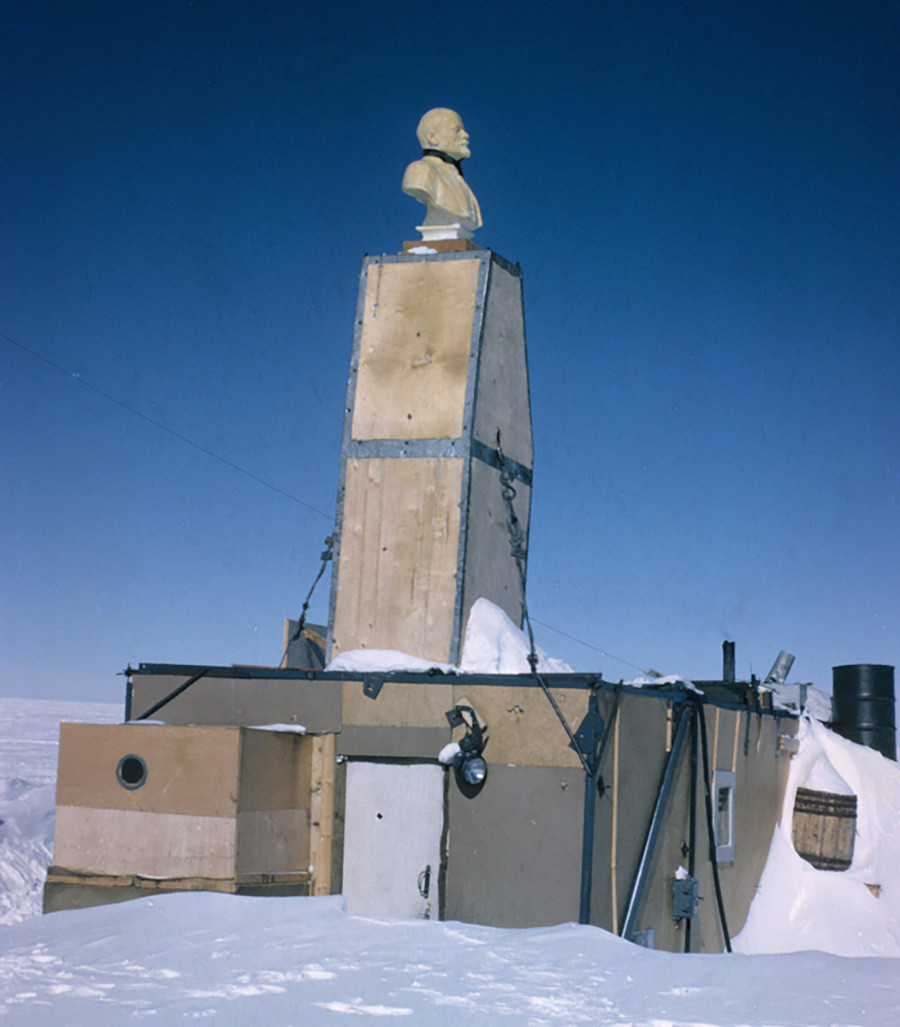 Lenin in 1965, gazing towards Moscow.

The hut was next visited by humans in 1967, when yet another Soviet expedition reached Antarctica’s point of inaccessibility, three years after the Americans had repositioned the bust. After that, no humans touched this frozen ground until 40 years later.

In January 2007, a team of Canadian and British explorers, including Canadian explorer Paul Landry and Britons Rupert Longsdon, Rory Sweet and Henry Cookson, attempted yet another audacious journey to Antarctica’s point of inaccessibility. 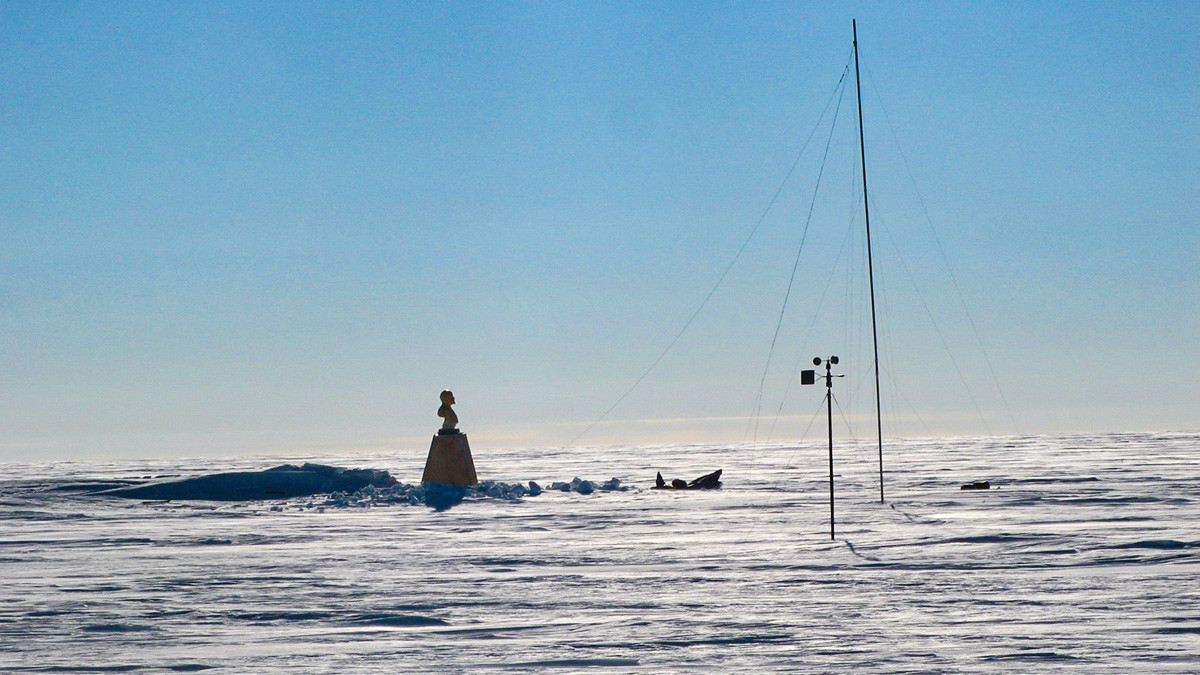 The old Soviet temporary Base ("Pole of Inaccessibility") reached by Team N2i on 19th January 2007. One can see the bust of V.I. Lenin, installed in the 1950s.

After the team had departed from the ‘Novolazarevskaya’ Russian scientific base and covered 1,700 kilometers on kite ski aided by no motor vehicle whatsoever, the explorers saw something protruding from under the thick layer of snow. 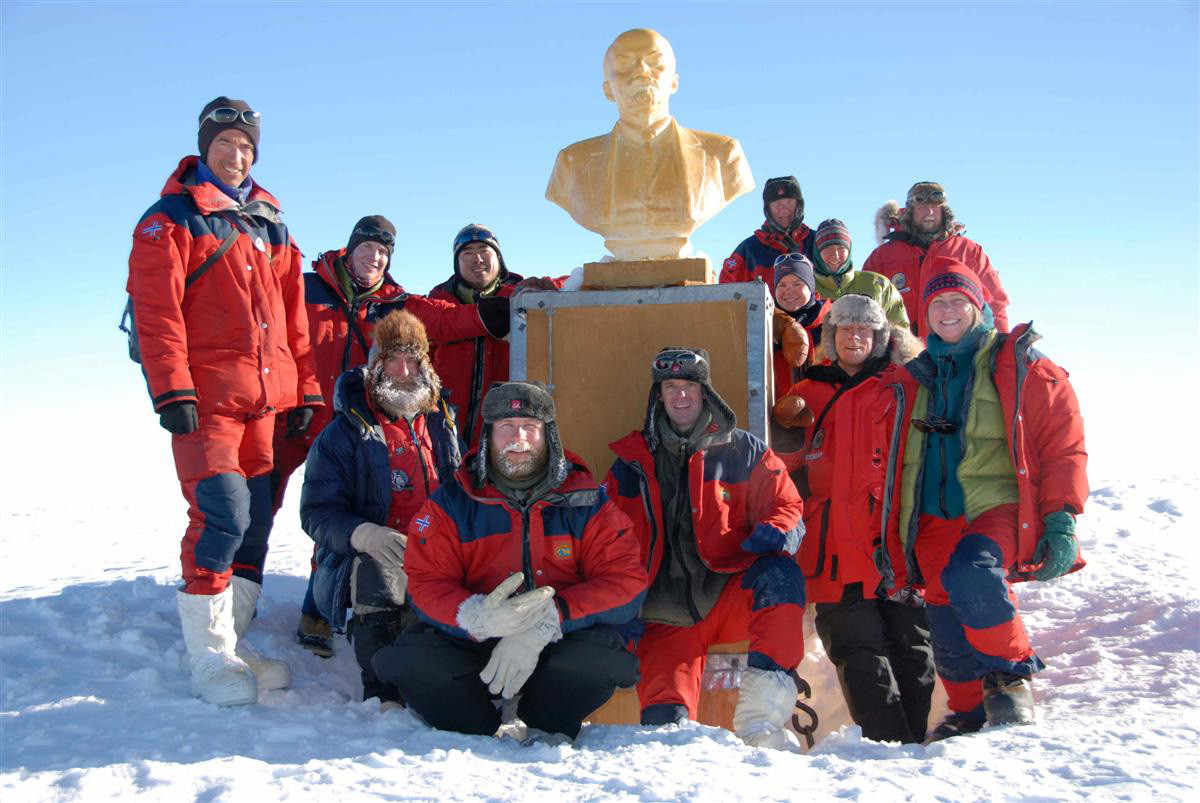 “About 20 miles out, we spotted a black dot on the horizon. As we got nearer, the dot began bigger which gave us something to aim for. Before that, I’d just focused on the horizon,” Rupert Longsdon told British newspaper The Independent, soon after the team had reached the old Soviet base standing at the point of inaccessibility.

“Once we were about 200 meters from the black dot - the bust of Lenin - we all stopped and took off our skis. There was a huge amount of hugging and shouting as we walked the last bit,” said the explorer. 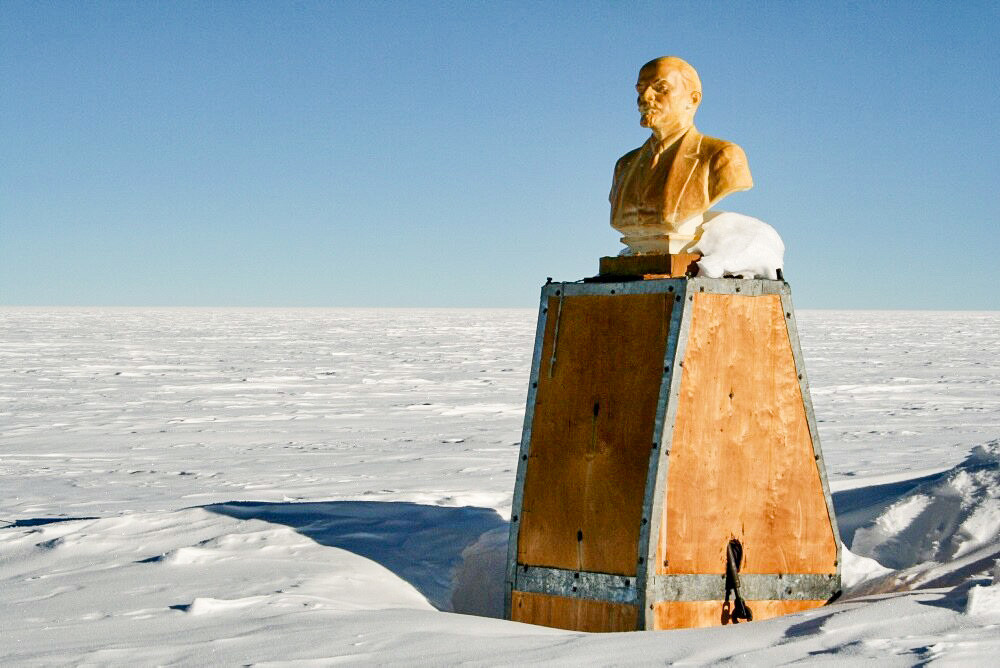 Lenin's bust. The hut is buried under a layer of snow.

By the time the N2i team had reached the Soviet station, it was almost completely buried under the snow. Only Lenin’s bust, which the Soviets set at the highest point on top of the whole structure, was visible from under the snow.

As of today, nobody knows if the bust is still visible or if it’s now covered with snow just like the rest of the Soviet hut set at Antarctica’s least accessible point.

Click here to read about a team of Soviet women who walked thousands of miles on skis and reached the South Pole.