4 reasons Paul I of Russia was murdered 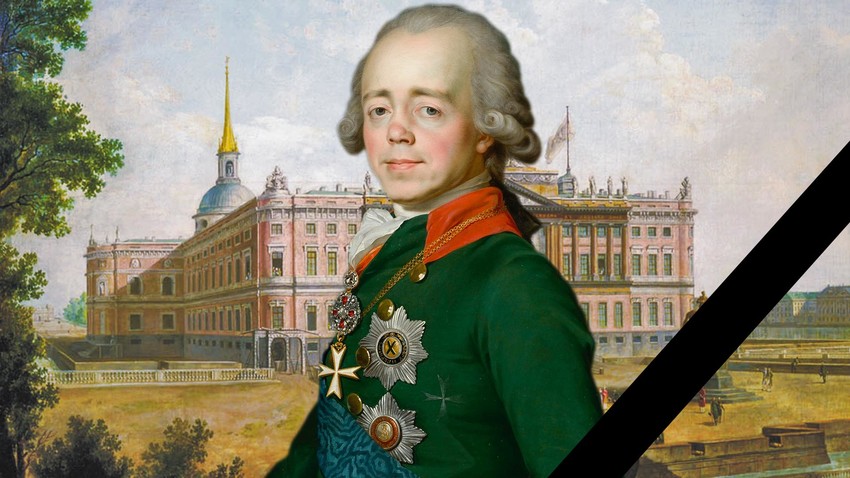 Russia beyond (Photo: Royal Collection; Fyodor Alekseyev)
Emperor Paul I tried to change Russia in one go and forcibly. Although he only wanted the best for the country, his chaotic actions led to disastrous treason, and Paul was murdered. Here are the main reasons why this happened.

Paul I had many problems and troubles growing up – beginning with, his father Peter III of Russia (1728-1762) was deposed and murdered as a result of a conspiracy inspired by his mother Catherine II. Paul was just 8 at the time, but later in life he learned about the horrific event.

Grand Duke Paul was the rightful heir to the throne, but Catherine II made plans to make his son Alexander the next emperor, and Paul knew about this. As a young man, he was scorned and mocked by his mother’s favorites and statesmen. That made Paul incredibly insecure and suspicious.

When he ascended the throne after the death of his mother in 1796, at 42, he was longing to change almost everything at the Imperial Court and in the country in general. Unfortunately, his hasty actions led to disaster – he was murdered in 1801 by a gang of high-ranking conspirators. What were the main reasons for this?

1. His chaotic demeanor made the whole Imperial Court insecure 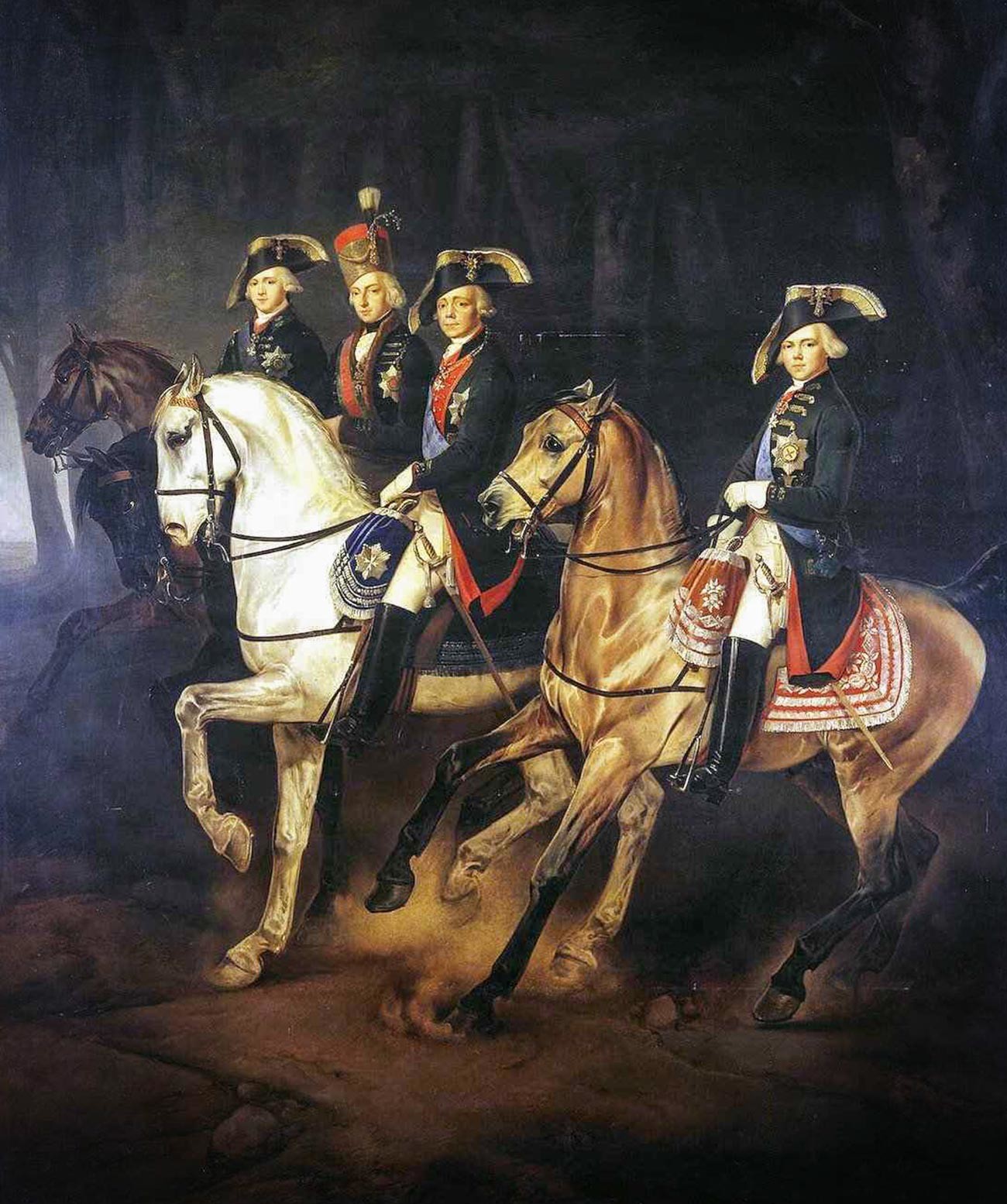 "Equestrian portrait of Emperor Paul I with his sons and Palatine Joseph of Hungary," by Johann Baptist von Lampi the Younger

Immediately after ascending the throne, Paul I started issuing new laws and regulations, implementing the plan he was carefully hatching during his years as a Grand Duke. He introduced hundreds of changes to all aspects of the Russian life – from daily routines at the Imperial court to army uniforms. Paul was very picky and engaged in fault finding – insecure from a young age, he was always suspicious of conspiracies and treason against him.

The smallest violation of military regulations at a muster or a parade could lead to exile. Training and musters went on almost daily in St. Petersburg in those days, and the Emperor was present at a lot of them. There were numerous times he tried to beat careless or negligent officers with his cane, shouted at them and ordered them out of the army. However, Paul often experienced a change of heart, retracted his own orders or even rewarded the same officers he scorned – out of pure embarrassment for his bouts of anger.

Such demeanor quickly made everybody around him alert and frightened. With Paul, it seemed a storm could break out any moment, the atmosphere was thick with uneasiness.

2. He lost the trust of the Imperial Guard 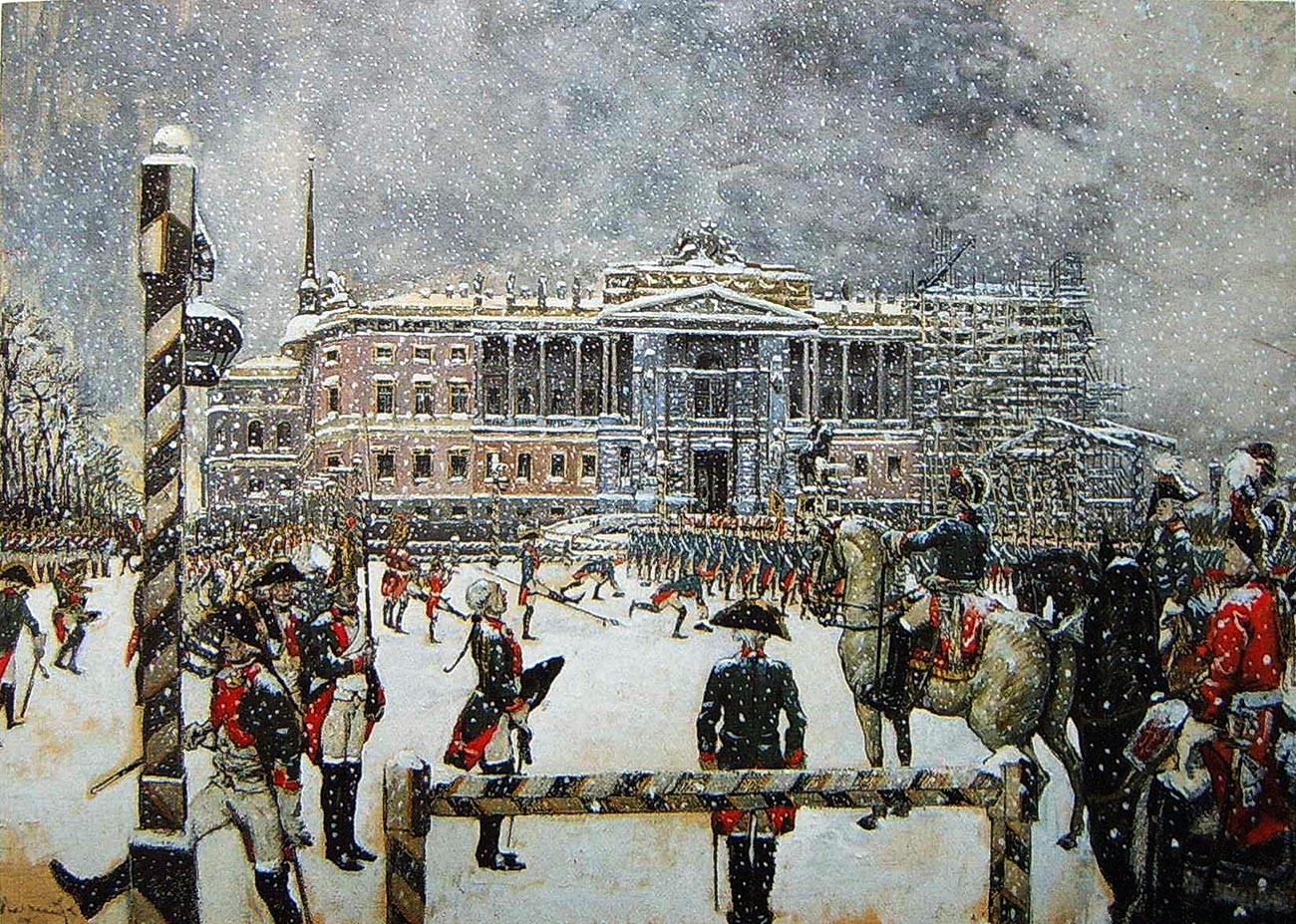 "Parade during the reign of Paul I of Russia," by Alexander Benois

The Imperial Guard, consisting of several regiments (Preobrazhensky, Semenovsky, Izmailovsky etc.) was at the same time the elite of the Russian Imperial army and the Emperor’s personal guard, which ensured his security in his residences. As soon as Paul I became the Emperor, he did something that turned the Imperial Guard against him.

Before becoming the Emperor, Paul I spent more than 20 years living in his residence in Gatchina (a suburb of St. Petersburg), granted to him as Grand Duke. There, he practiced in military training with the regiments housed in Gatchina. For these regiments, Paul chose the soldiers himself. They mostly came from the poorest noble families, because the richest noblemen served in the Imperial Guard. However, by the end of Catherine II’s reign, the discipline in the Imperial Guard became excruciatingly poor – lack of military training, drinking, high life were the Guards’ vices. On the contrary, the Gatchina soldiers were superbly trained in military formations and weapon handling, and had iron discipline, because they were trained by Paul I personally, and he was keen on military training. 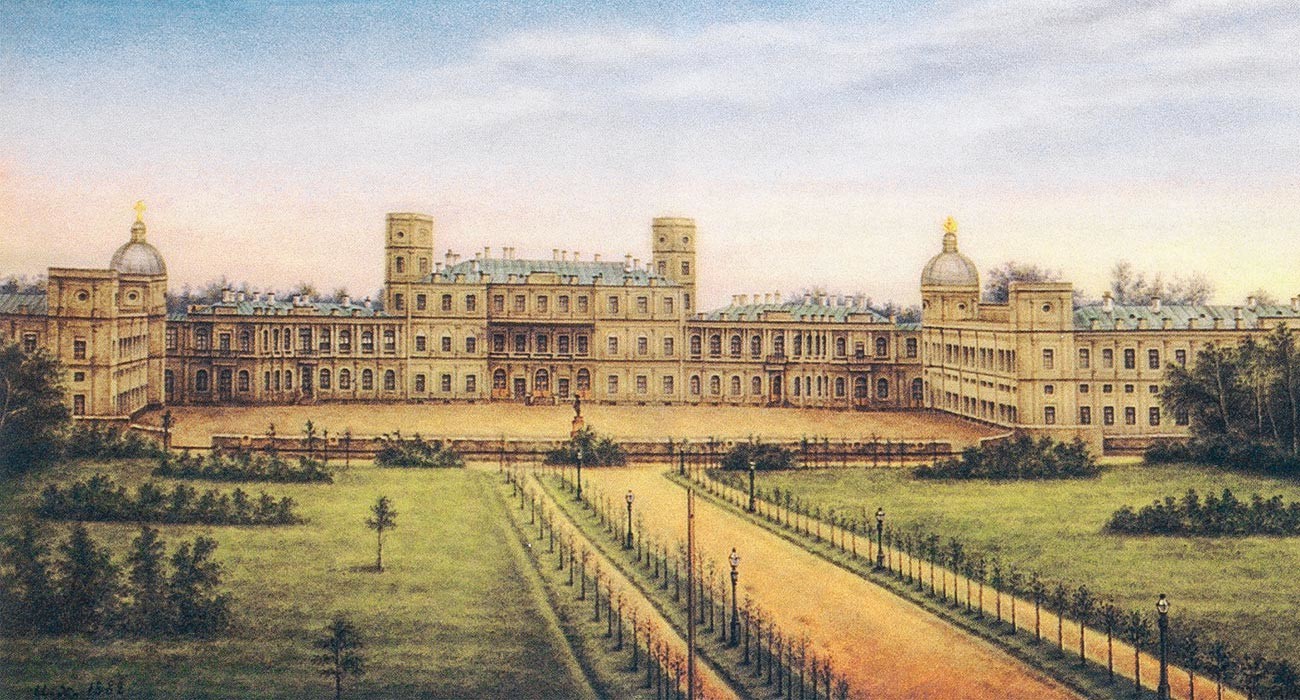 As soon as Paul became the Emperor, he made all his Gatchina soldiers and officers members of the Imperial Guard, which offended the rest of the Guard greatly – their high-ranking relatives often gave serious bribes to get them into the Guard! Now, they had to serve together with some poor guys from different regions of Russia, who, to add insult to injury, often were better trained!

For the whole five years of Paul’s reign, anxiety was brewing among the Imperial Guards. Finally, when on March 1st, 1801, Paul was murdered, the Imperial Guard didn’t stop the conspirators from getting into the Mikhailovsky castle, Paul’s new residence – because most of the old Guards were naturally against the Emperor.

3. He got into conflict with the Russian nobility 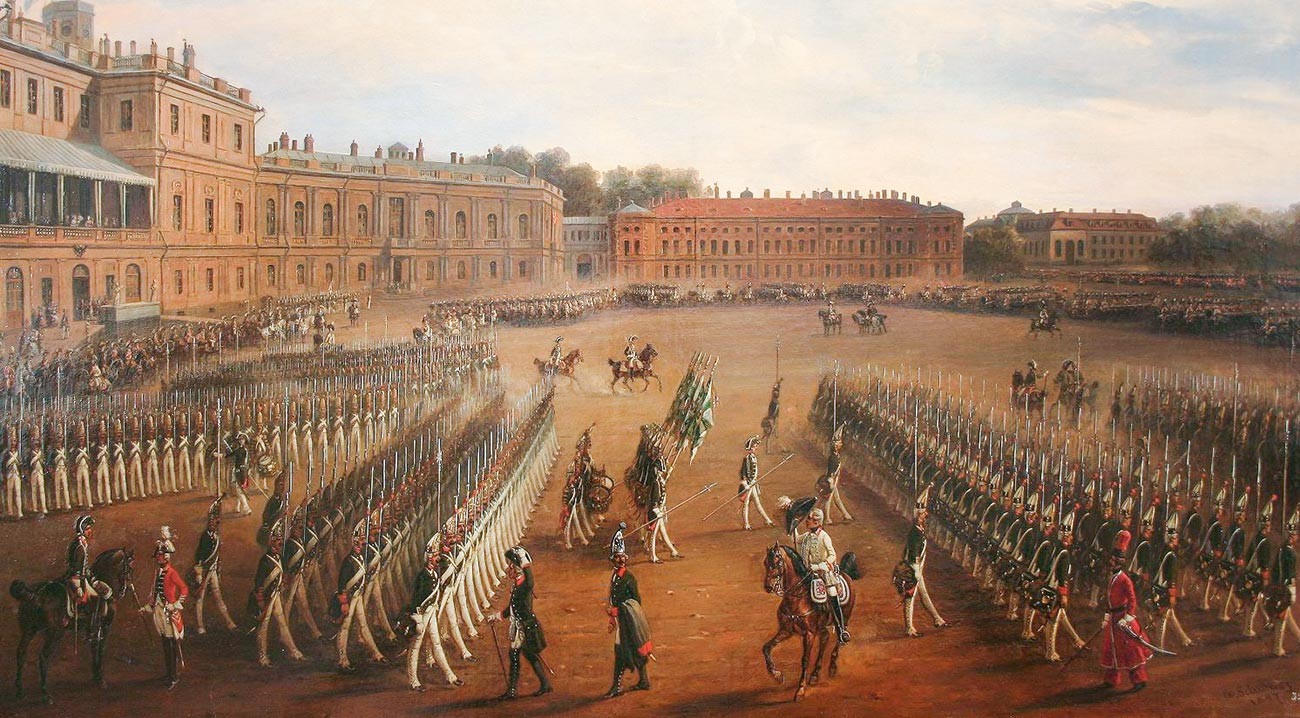 "Parade during the reign of Paul I of Russia," by Gustav Schwartz

During the latter years of Catherine’s reign, high-ranking statesmen showed up at their workplaces in the afternoon, military officers stationed in St. Petersburg rarely showed up for musters, preferring to spend nights and days in aristocratic salons. Within days of Paul I became Emperor, life in St. Petersburg changed drastically. All statesmen were to be present at their workplace from seven in the morning (Paul I himself got up at five). All officers were to wear only their uniforms, at all times.

What’s more, all officers who were assigned to any military regiment were to show up for musters and training – if they failed to do so, they were expelled from the army. This was a huge change, because under Catherine, most of the sons of aristocratic families were just assigned to regiments, but never showed up, and didn’t suffer any penalties for being absent from service. Under Paul, arrests, dismissals and exiles were implemented widely as penalties, to keep the army in shape. However, the Russian nobility considered this an insult, an attack on their rights.

Paul, just like his great-grandfather Peter the Great, wanted to make the Russian nobility serve the state. But he did it too fast and too drastically – just like Peter, Paul tried to regulate every part of the life of noblemen and their families, especially in St. Petersburg, where the state’s elite lived and worked. But Paul I wasn’t Peter the Great, and by the end of the 18th century, the nobility was much more powerful than in Peter’s times. So, Paul just enraged the whole noble class, who had become accustomed to lavish and lazy lifestyles, and were now expressing their disdain – clandestinely, because open confrontation with the Emperor surely led to dismissal and exile.

4. He teamed up with Napoleon against the Great Britain 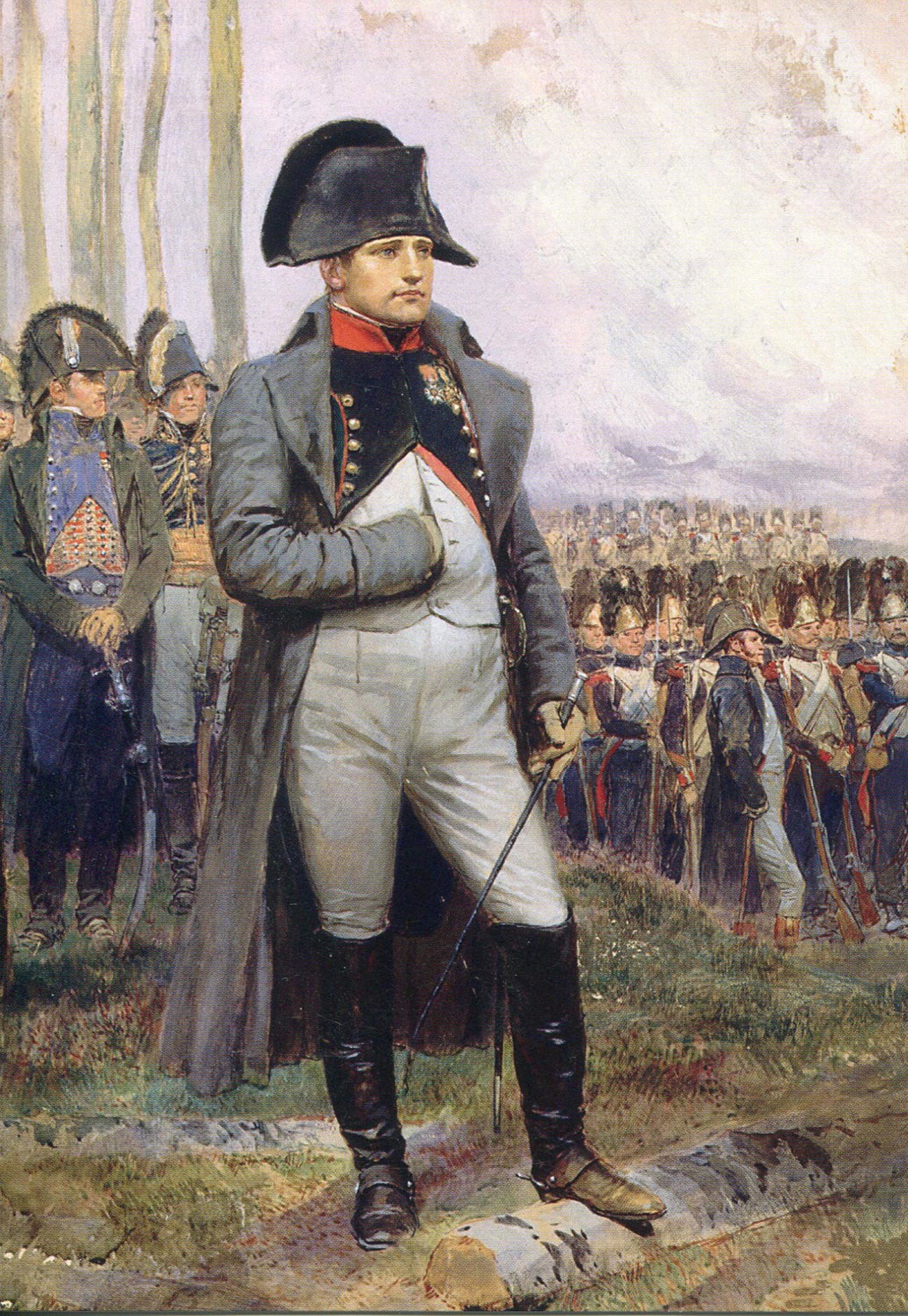 From the start of his reign, Paul saw the main direction of his foreign policy in the struggle against revolutionary France. The Russian Empire joined the First and the Second Coalitions against Napoleon, along with Prussia, Austria, and other European powers, including Great Britain.

During these wars, Russia has gained protectorate over the island of Malta – in 1798, Paul I became the Grand Master of the Order of Malta and considered the island a future base for Russian fleet in the Mediterranean. When in 1800 Great Britain took control of the island, this was taken by Paul as a personal insult. He ordered all English ships in Russian ports to be captured (there were up to 300 of them), payments to all English merchants were suspended, and a ban on English goods in the Russian Empire was introduced. Diplomatic relations between the two countries were suspended. 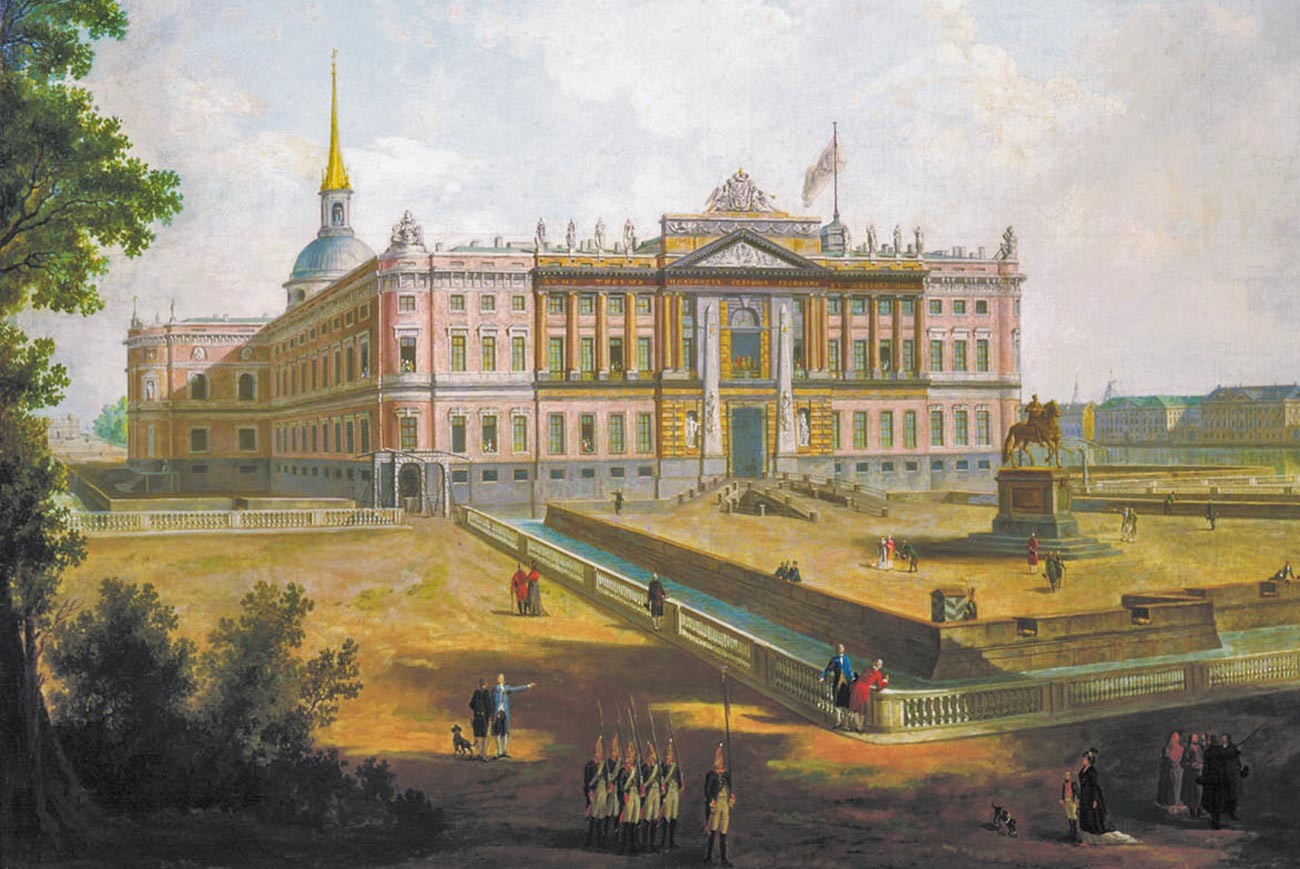 The Mikhailovsky Castle, Paul's fortress in St. Petersburg where he was murdered

Paul I started corresponding with Napoleon and planning a joint campaign against the British territories in India. “Together with your sovereign, we will change the face of the world!” Napoleon told the Russian envoy in Paris. The plan called for over 70,000 French and Russian soldiers to enter India, and the first detachment of over 22,000 Cossack troops was already on the way to India when Paul I was murdered.

The conspirators to the murder of Paul I included Lord Charles Whitworth, British envoy to Russia. He was aided by his lover Olga Zherebtsova, sister of Platon Zubov, the last favorite of Catherine II and Paul’s personal enemy. Many historians still believe that Paul’s murder was financed by British intelligence.