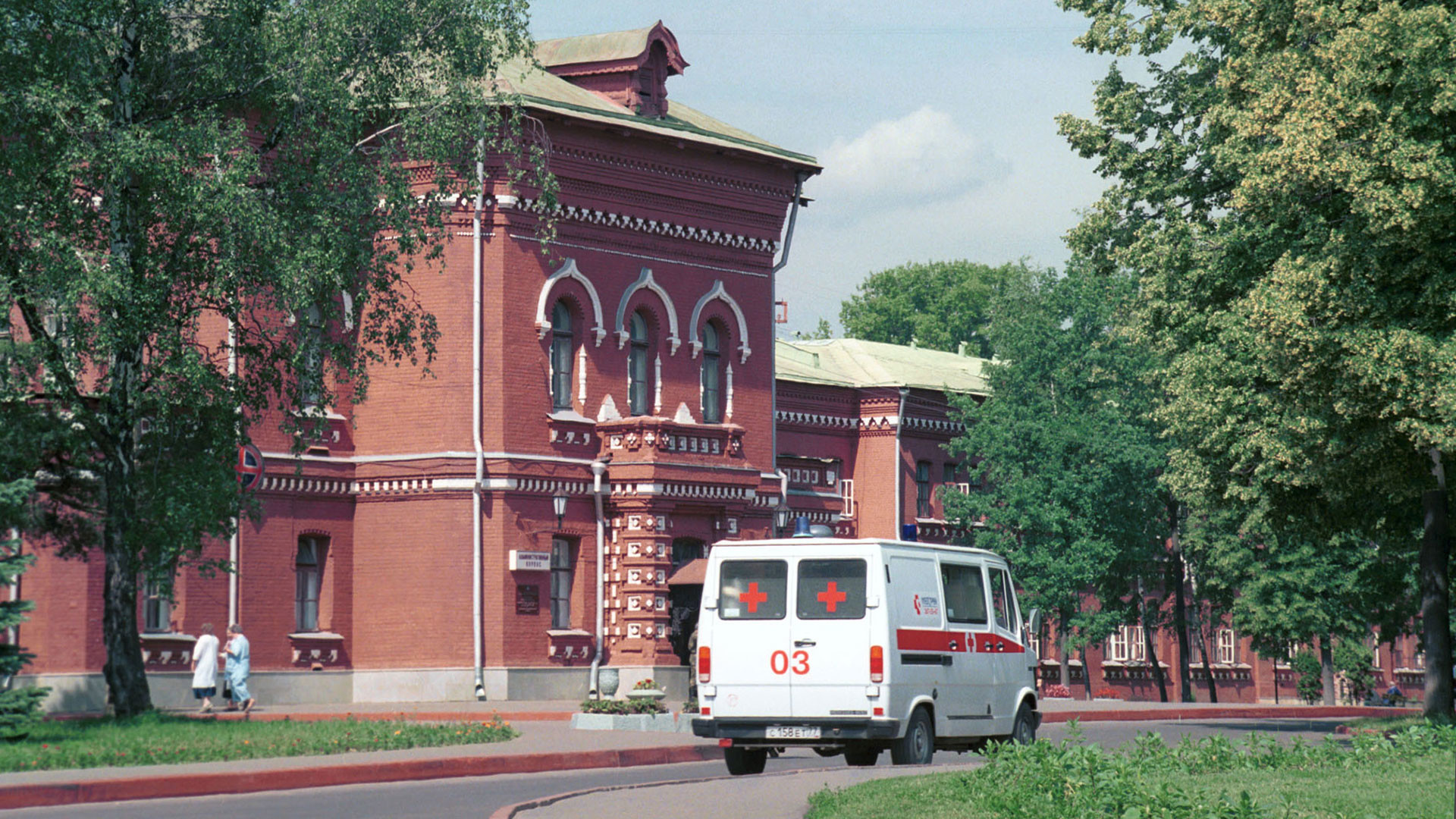 Ludmila Pakhomova/TASS
The Alexeyev Psychiatric Clinical Hospital was built to give mentally ill people help, peace and quiet, instead of old and cruel treatment measures.

As Moscow grew, the Preobrazhenskaya Hospital (the first psychiatric clinic) couldn’t treat all the arriving patients anymore. This fact made local psychiatrists quite concerned. They asked Nikolai Alexeyev, the city mayor, for help. In 1889, he organized fundraising to solve this problem. At first, the mayor only wanted to expand the Preobrazhenskaya Hospital, but then, he decided that Moscow needed a second clinic with 300 new beds. 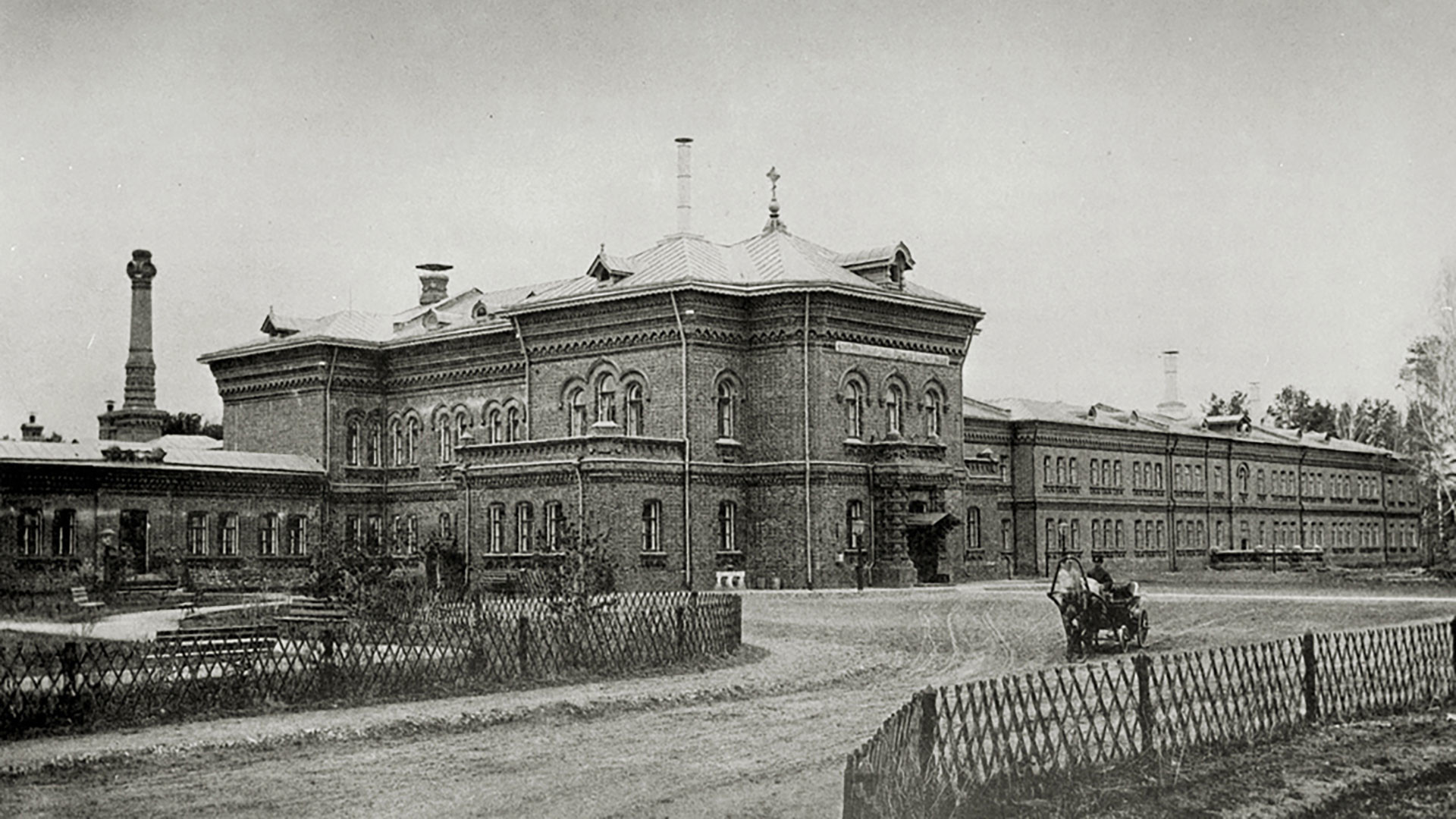 A commission of psychiatrists and city officials, headed by Alexeyev, decided to build the new clinic on the territory of the former Beketov manor. In the middle of the 19th century, merchant Kanatchikov bought these lands and named them ‘Kanatchikova dacha’, which then stuck to the hospital itself. 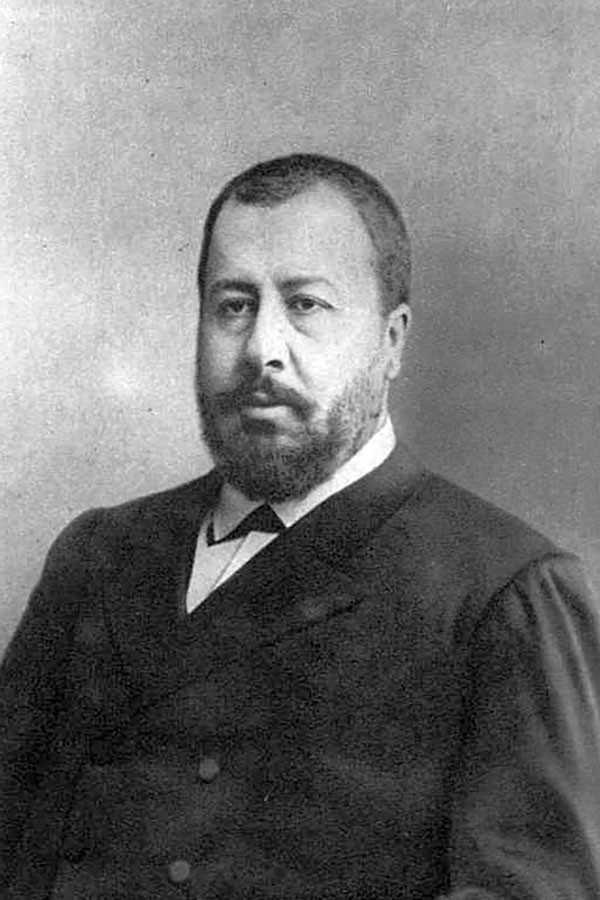 Famous psychiatrist Viktor Butske designed the plan of the future clinic: it had to be a complex of distant two-floor pavilions joined with warm passages for doctors. This complex had a ‘U’-shape and was divided into two halves - for men and women. The departments were located at the sides of the central administrative building. This plan left a lot of free space on the territory, as Butske understood that the complex would, most likely, be expanded later. 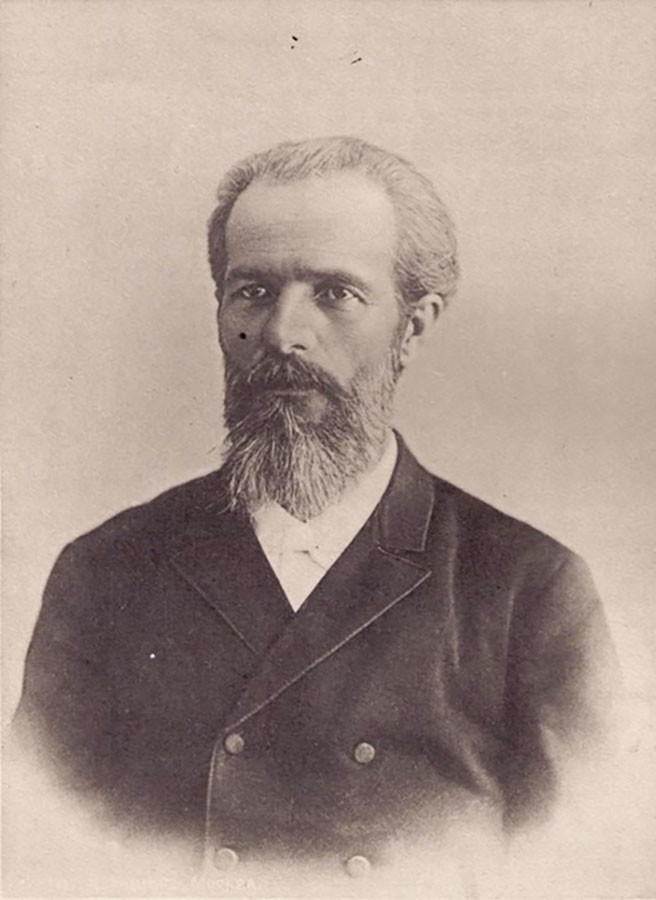 Viktor Butske, the plan developer and first head of the Alexeyev hospital.

The construction began in 1890. The first half of the red and white brick complex started operating in 1894 and, in two years, the second was opened. In the following several years, the clinic was expanded with extra departments (for example, for chronically ailing people). It’s remarkable that practically all the money for the building was donated by rich Muscovites encouraged by Nikolai Alexeyev. The mayor, meanwhile, was shot and killed in 1893. Experts then found out that his killer had a mental disorder… And the new hospital was named in honor of Alexeyev. 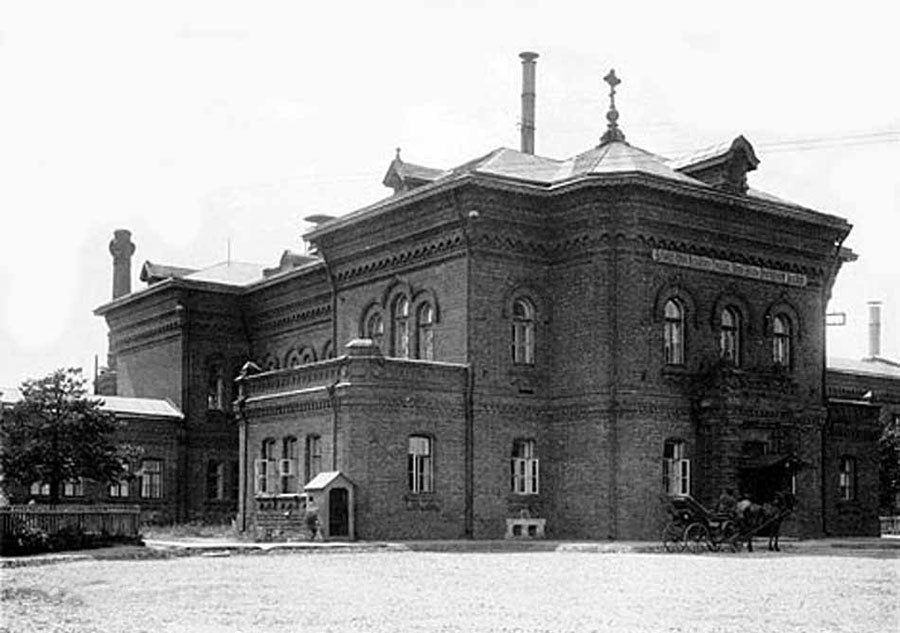 The administrative building of the hospital, 1913.

When the first half was opened, Viktor Butske became the head of the hospital. He was a supporter of the ‘no-restraint’ system. That’s why straitjackets were never used in Alexeyev Hospital - the doctors wrapped aggressive patients into wet bed sheets to calm them down. Butske understood that the atmosphere mattered. Each department had its own garden. All the wards were well-furnished, except the ones for the violent. He made sure all the staff respected the ill and were kind to them. At first, the hospital used some isolation rooms and kept window screens in the wards for violent patients, but these measures had disappeared completely by 1903. 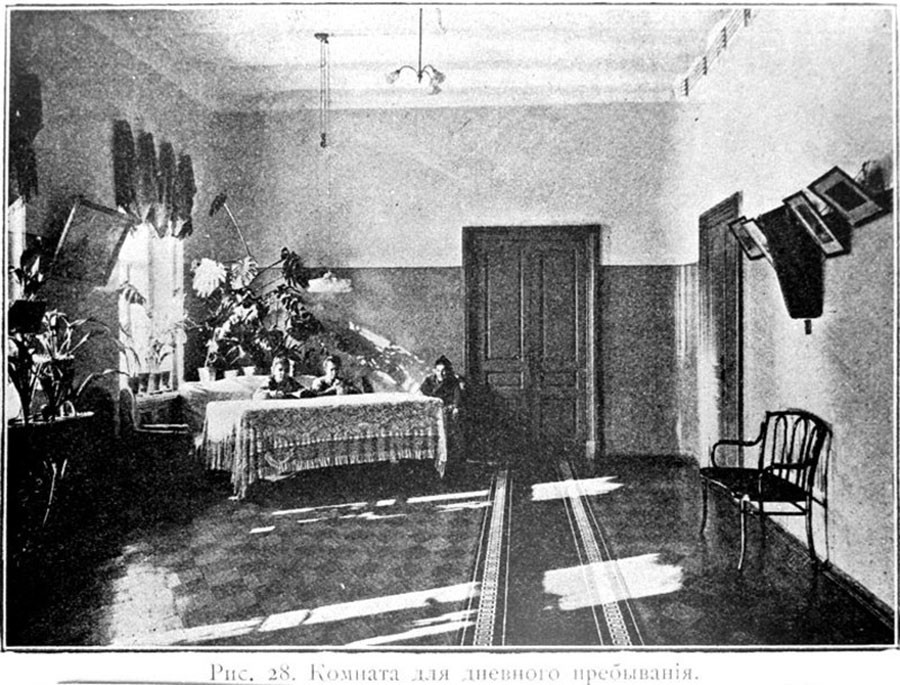 As the number of patients grew, Butske had decided to let some of them live and work out of the clinic and organized the system of patronage. In 1900, he started to relocate some patients into families living in the villages near Moscow (for example, Troparyovo and Belyayevo, which are now parts of the city). Of course, the hospital staff kept supervising such patients. Butske knew that the patronage would do well: while he worked at the Preobrazhenskaya hospital, a friend of his was declared to have an incurable mental disorder. The doctor put his friend with a peasant family and it helped a lot to fight the illness. 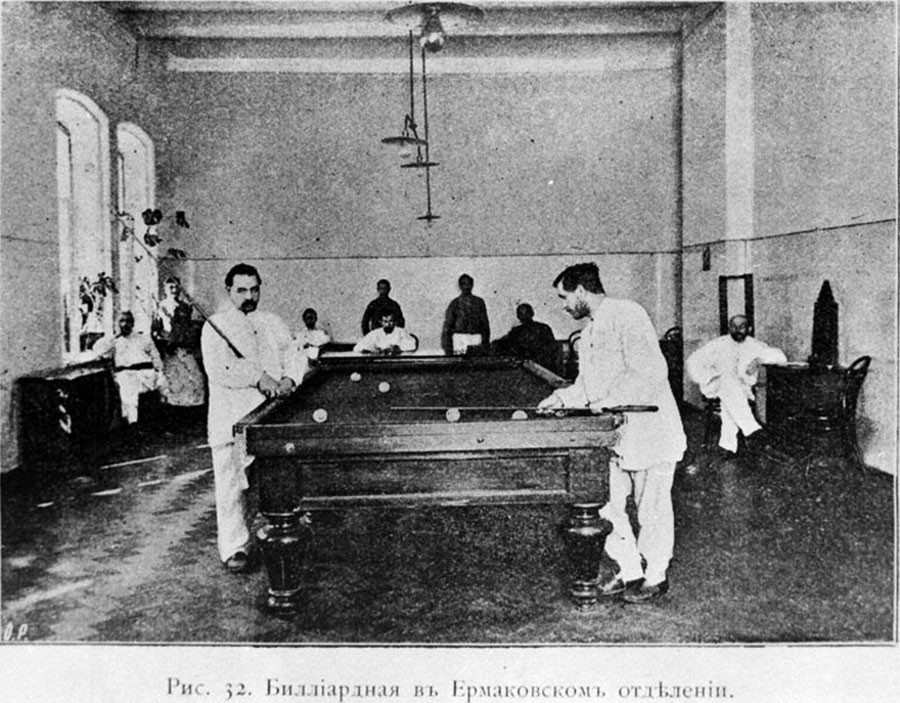 The pool room in the department for the chronically ailing, 1904-1906.

Butske was replaced by another remarkable psychiatrist named Pyotr Kashchenko in 1904. The new hospital head kept developing the ideas of the ‘no-restraint’ system. The patients were also allowed to receive visitors. One of the doctors remembered that Leo Tolstoy once came to see someone there. Kashchenko did his best to destigmatize the patients with mental disorders and to socialize them. He already had some experience of applying work therapy and, in 1905, a new building for workshops and entertainment was built for the hospital. 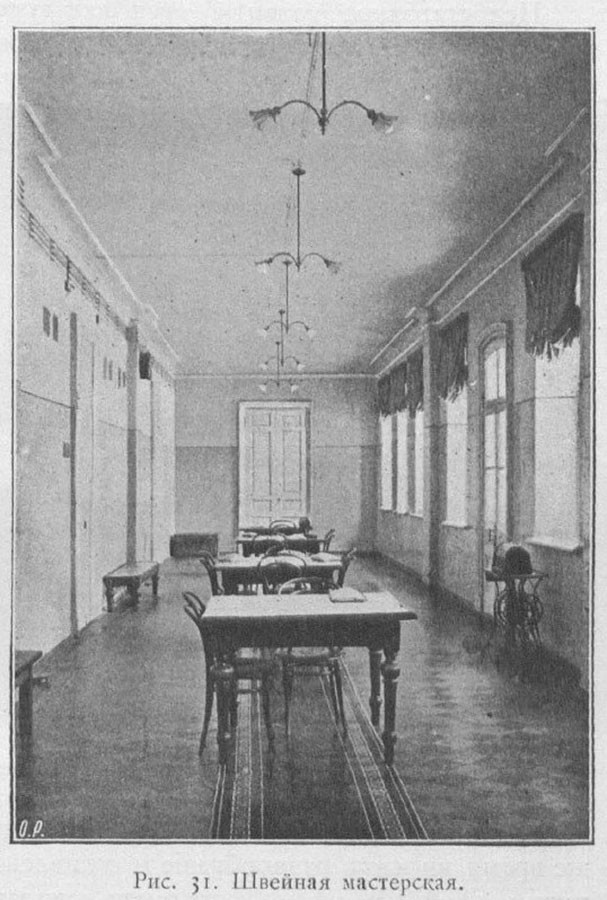 When the Russian Revolution of 1905 started, Kashchenko organised medical brigades to help injured revolutionaries. At the time, he was too respected to be punished for his political views. The Soviet administration then honored the doctor for his deeds: In 1922, they renamed the Alexeyev Hospital after Kashchenko, though he had left for St. Petersburg in 1907. Unfortunately, during the Soviet period, people were still afraid of psychiatric hospitals (because of repressions) and of people with mental disorders, so the name of the great doctor received negative associations. 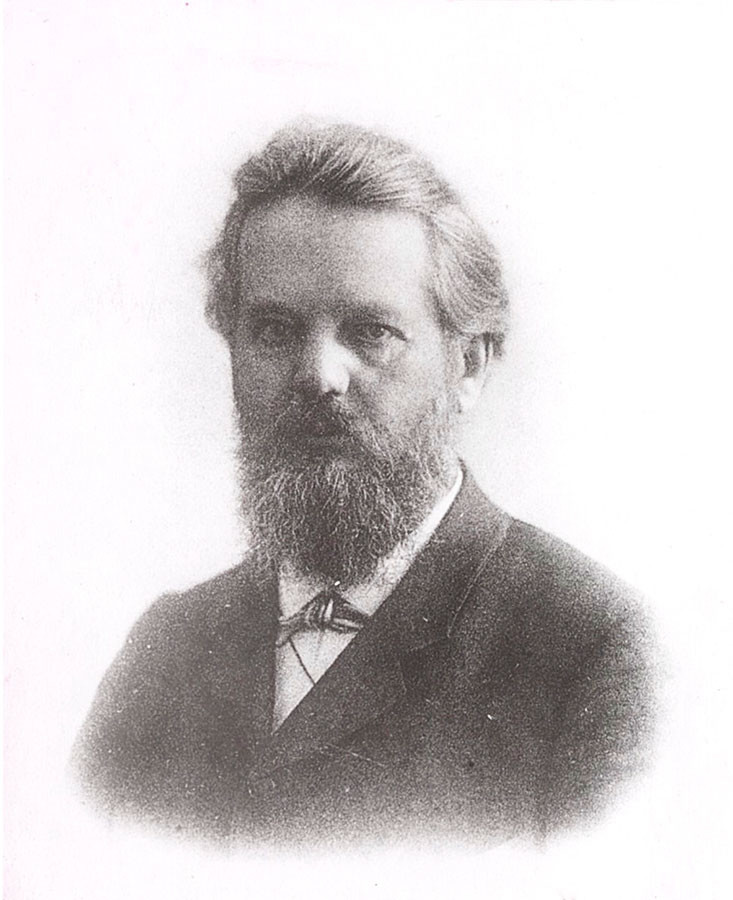 During World War II, Kashchenko Hospital also received soldiers with craniocerebral injuries. Due to medication shortage, they were often treated with electroshock therapy - a notorious method that causes scientific disputes, though its efficacy is proven.

In the Soviet era, the hospital admitted some famous people. Joseph Brodsky spent some time there between 1963-1964 to undergo a psychiatric examination. The poet didn’t have an official job and was accused of “social parasitism”. Brodsky insisted that writing poetry was real work, but the court didn’t agree. The friends of the poet hoped the examination would save him from punishment, but it didn’t: In March 1964, Brodsky was condemned to compulsory labor In the Arkhangelsk area (990 km north-east of Moscow) and, later, had to emigrate. In the Kaschenko Hospital, Brodsky wrote a dark and hopeless poem titled ‘Novy God na Kanatchikovoy Dache’ (“New Year at Kanatchikova Dacha”). 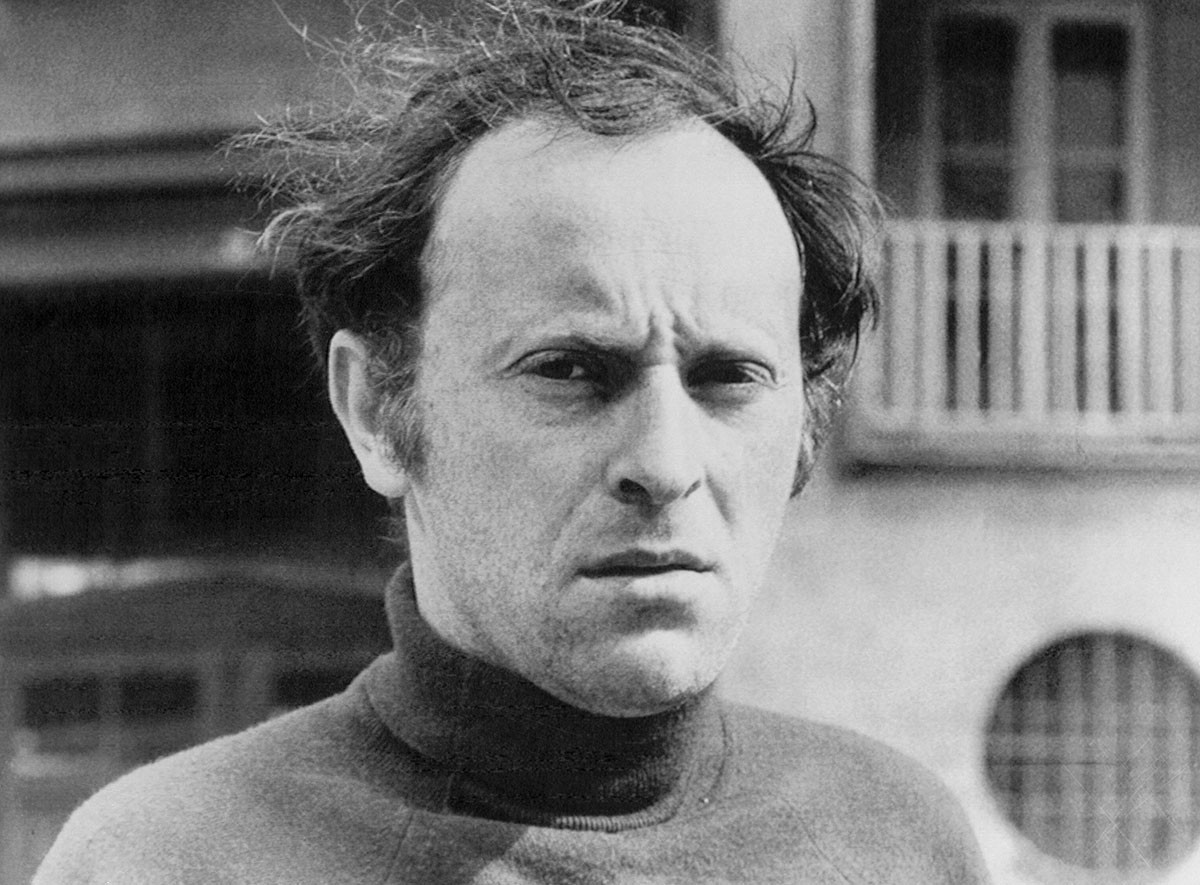 Famous Soviet bard and singer Vladimir Vysotsky also spent some time at the Kashchenko Hospital to treat his alcoholism. He described the life of the patients in a humorous song called ‘A letter to the editors office of ‘Obvious-Incredible’ TV program from an insane asylum - Kanatchikova Dacha’. There is an interesting detail: Vysotsky sings that the chief doctor named Margulis finally banned watching TV at the hospital. This is a fictional character. The real chief doctor at the time was Valentin Morkovkin, who later complained that he had done a lot for Soviet psychiatry (he had published many scientific works), but had finally become known as a doctor who tried to help Vysotsky. 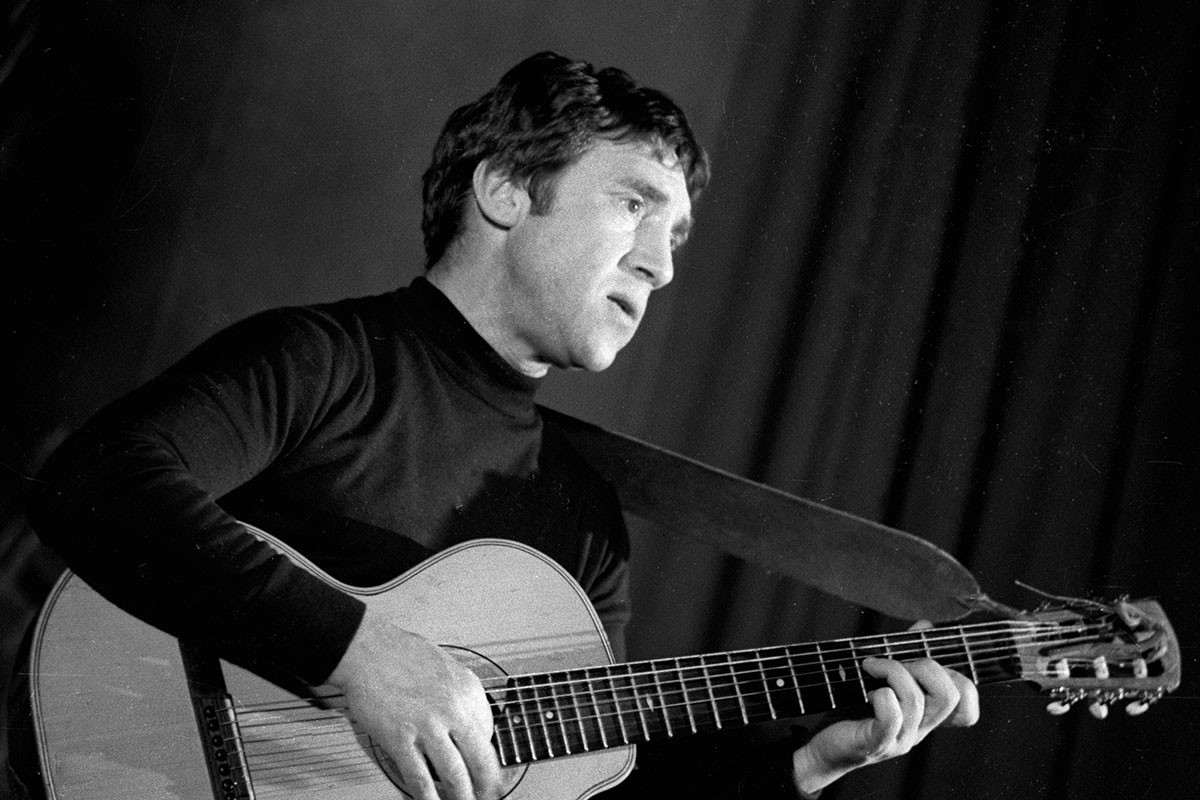 In 1994, the hospital was renamed back to the ‘Alexeyev Psychiatric Clinical Hospital’. Nowadays, it has numerous departments, branch clinics and even a radio station called ‘Zazerkalye’ (“Through the Looking Glass”) and runs psychiatric education courses. The primary principles of freedom and respect are still kept there. And even though the hospital’s name has changed, the people still commonly call it ‘Kashchenko’.