How many Days of Military Honor does Russia celebrate? 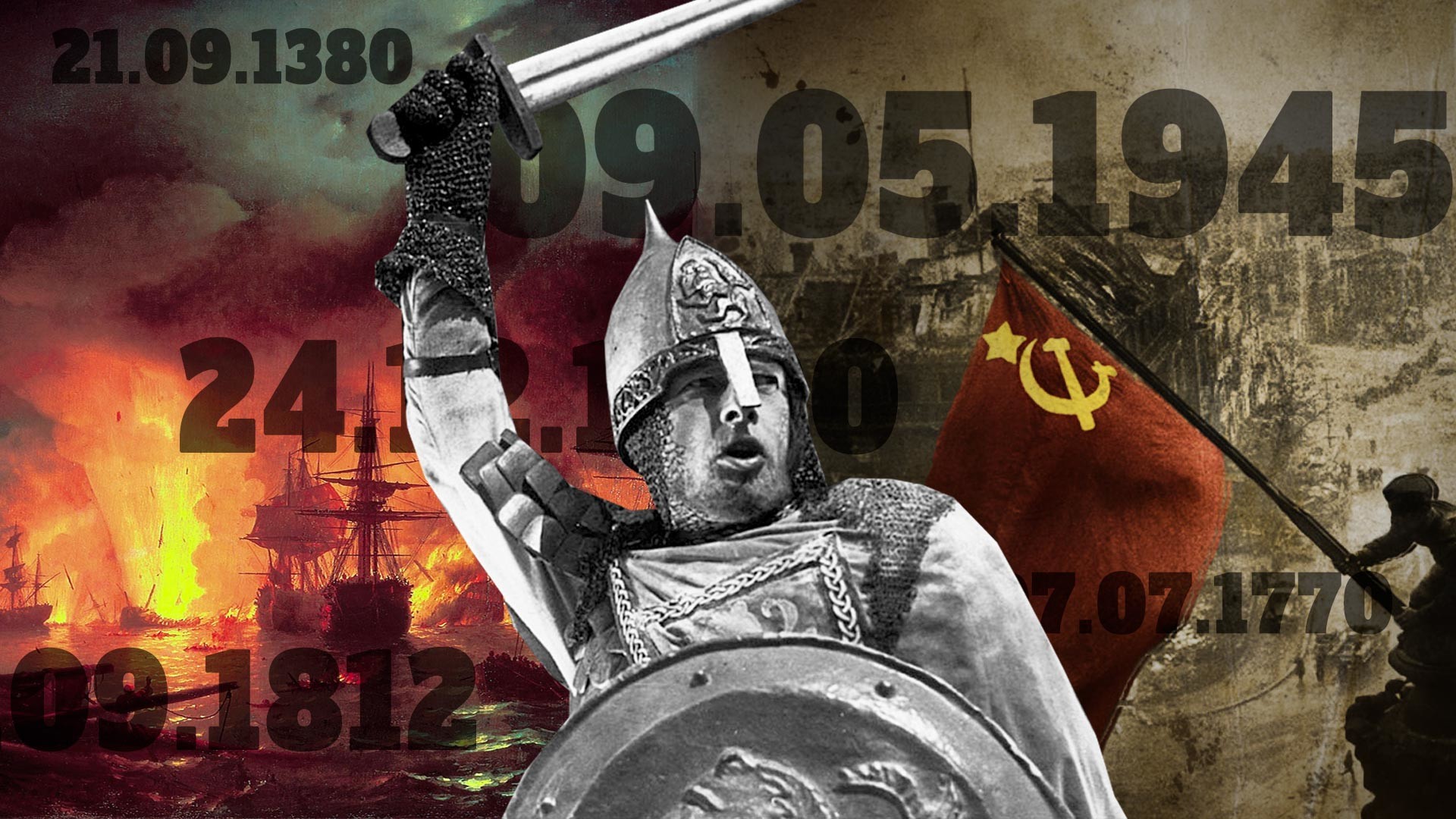 Kira Lisitskaya (Photo: Sergei Eisenstein/Mosfilm,1938; Ivan Aivazovsky; Yevgeny Khaldei/Sputnik)
Many victories by the Russian armed forces have saved the country from destruction and changed world history. It is in their honor that the national Days of Military Honor were established.

Day of the Total Liberation of Leningrad from the Nazi Blockade (Jan. 27) 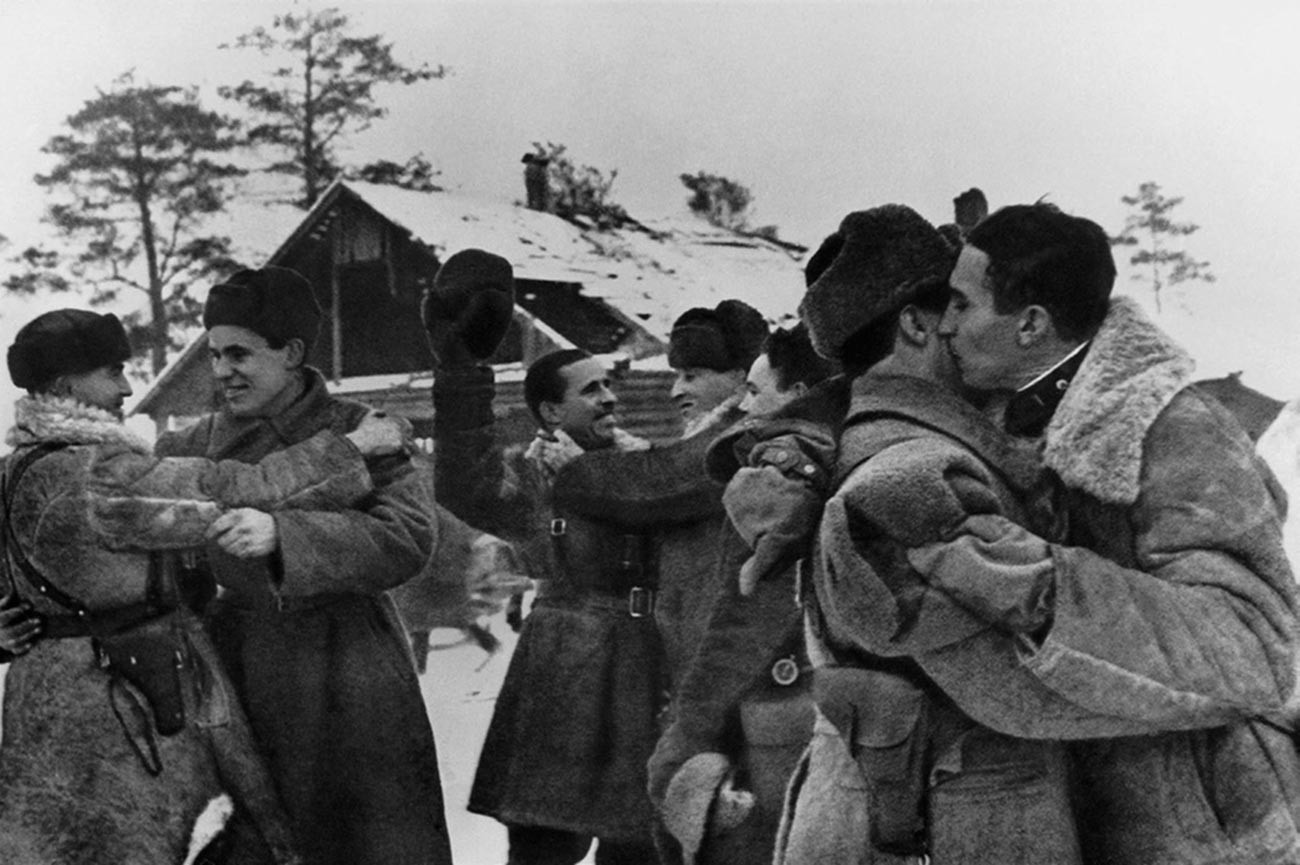 Breakthrough of the siege of Leningrad.

During the Leningrad–Novgorod operation in January–March 1944, the Red Army threw back Germany’s formidable Army Group North 180–280 km from Leningrad, forcing it to gain a foothold on the Panther–Wotan defensive line on the Estonian border. The blockade of the Soviet Union’s second most important city, which lasted 872 days and claimed the lives of up to one-and-a-half million people, was finally lifted.

Day of the Defeat of the Nazi Troops in the Battle of Stalingrad (Feb. 2) 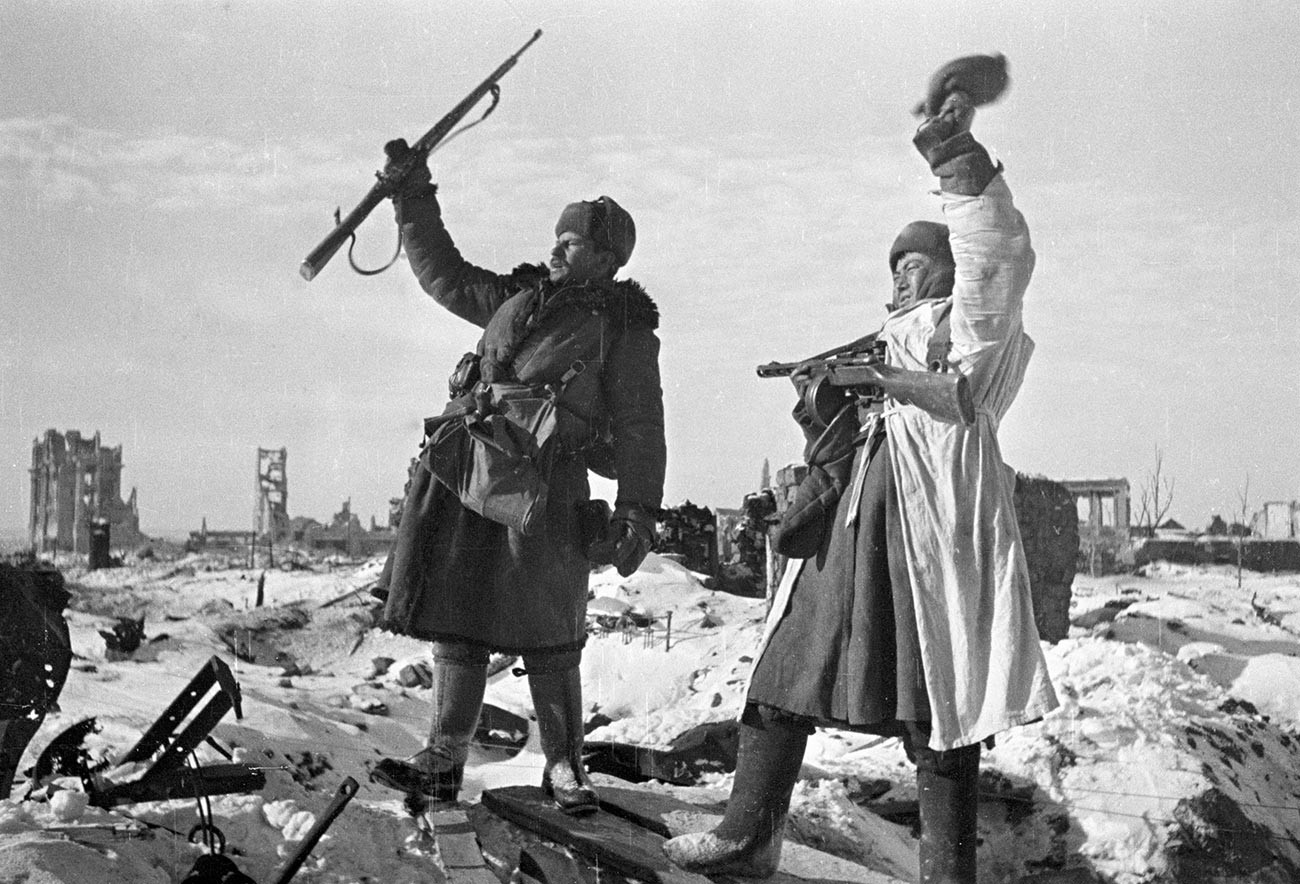 Soviet soldiers in Stalingrad, January of 1943.

On Nov. 23, 1942, during Operation Uranus, the Red Army fully encircled the German 6th Army at Stalingrad. On Jan. 26 the following year, the troops of the Don Front split the army into two groups, destroying each separately. It was a crucial turning point in WWII.

Defender of the Fatherland Day (Feb. 23) 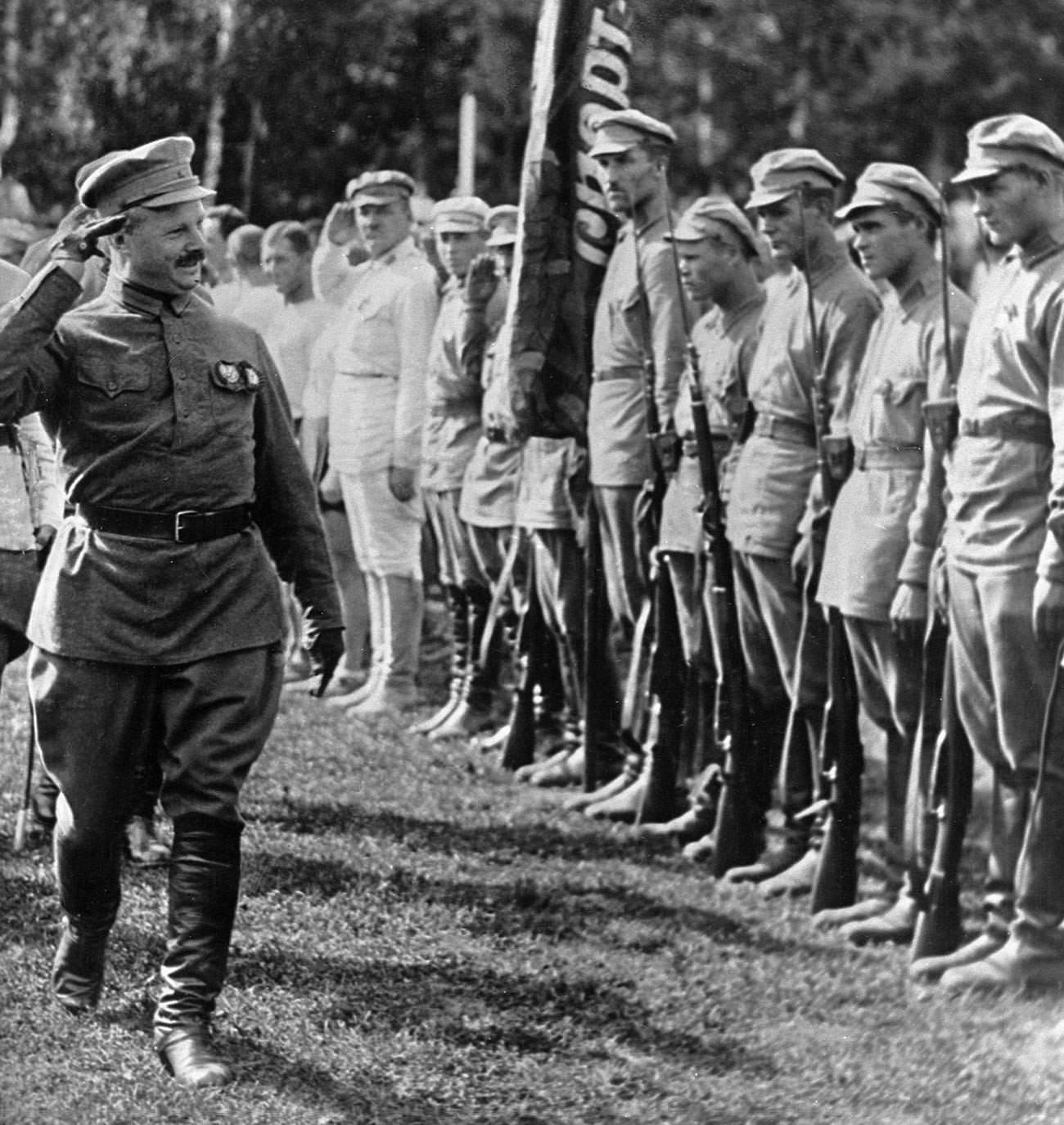 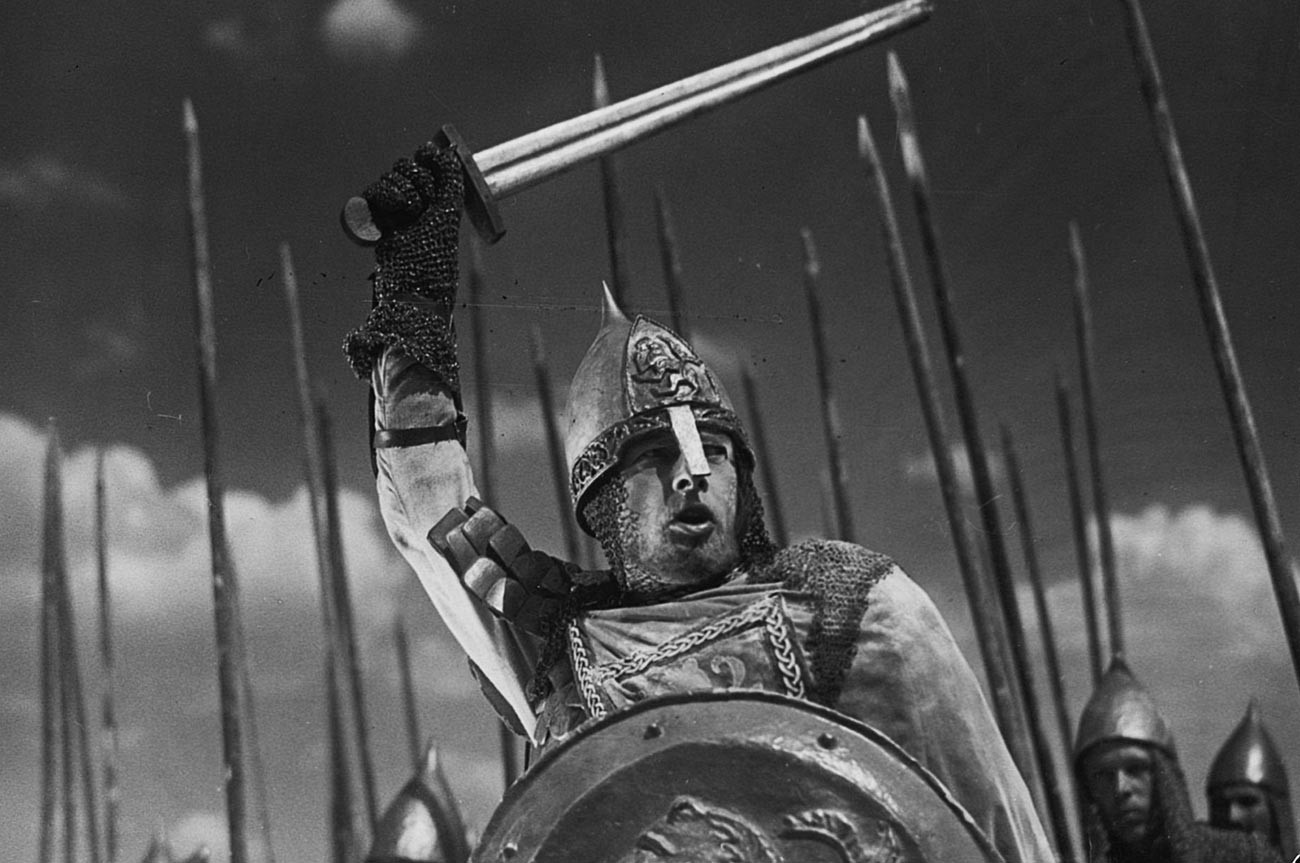 On April 5 (the Day of Military Honor is celebrated on April 18), 1242, in the region of Lake Chudskoe (Peipus), the Novgorod prince Alexander Nevsky defeated the army of the Teutonic knights of the Livonian Order and the Bishopric of Dorpat. The so-called "Battle on the Ice" played a key role in countering German expansion into north-western Russia in the mid-13th century. At a time when the Russian principalities further south were being devastated by the Mongol invasion, this was critical. 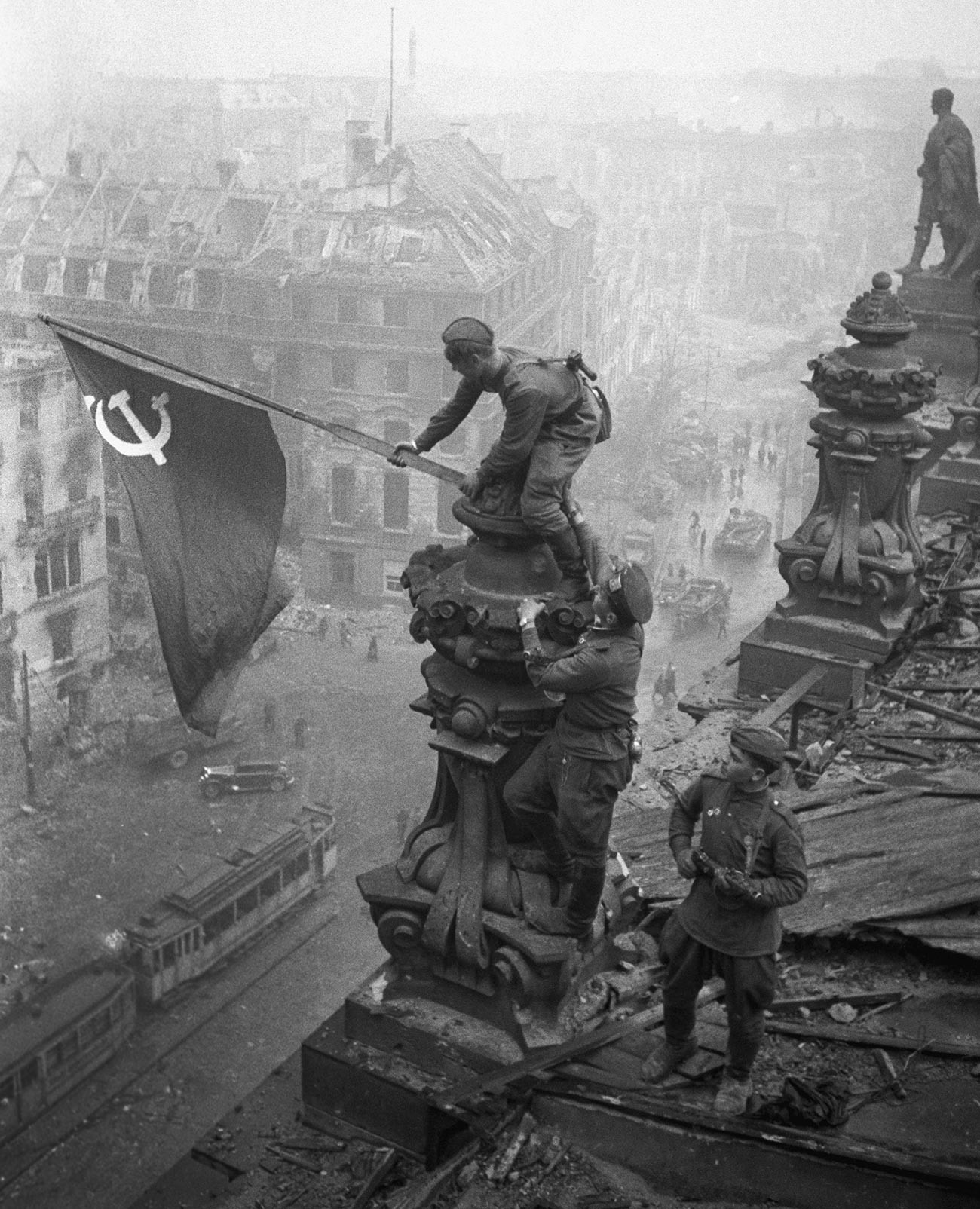 Red banner over the Reichstag in Berlin.

On the night of May 8–9, 1945, in the Berlin suburb of Karlshorst, the German armed forces signed an unconditional surrender, thus bringing the Great Patriotic War, which had claimed the lives of 27 million Soviet citizens, to an end. 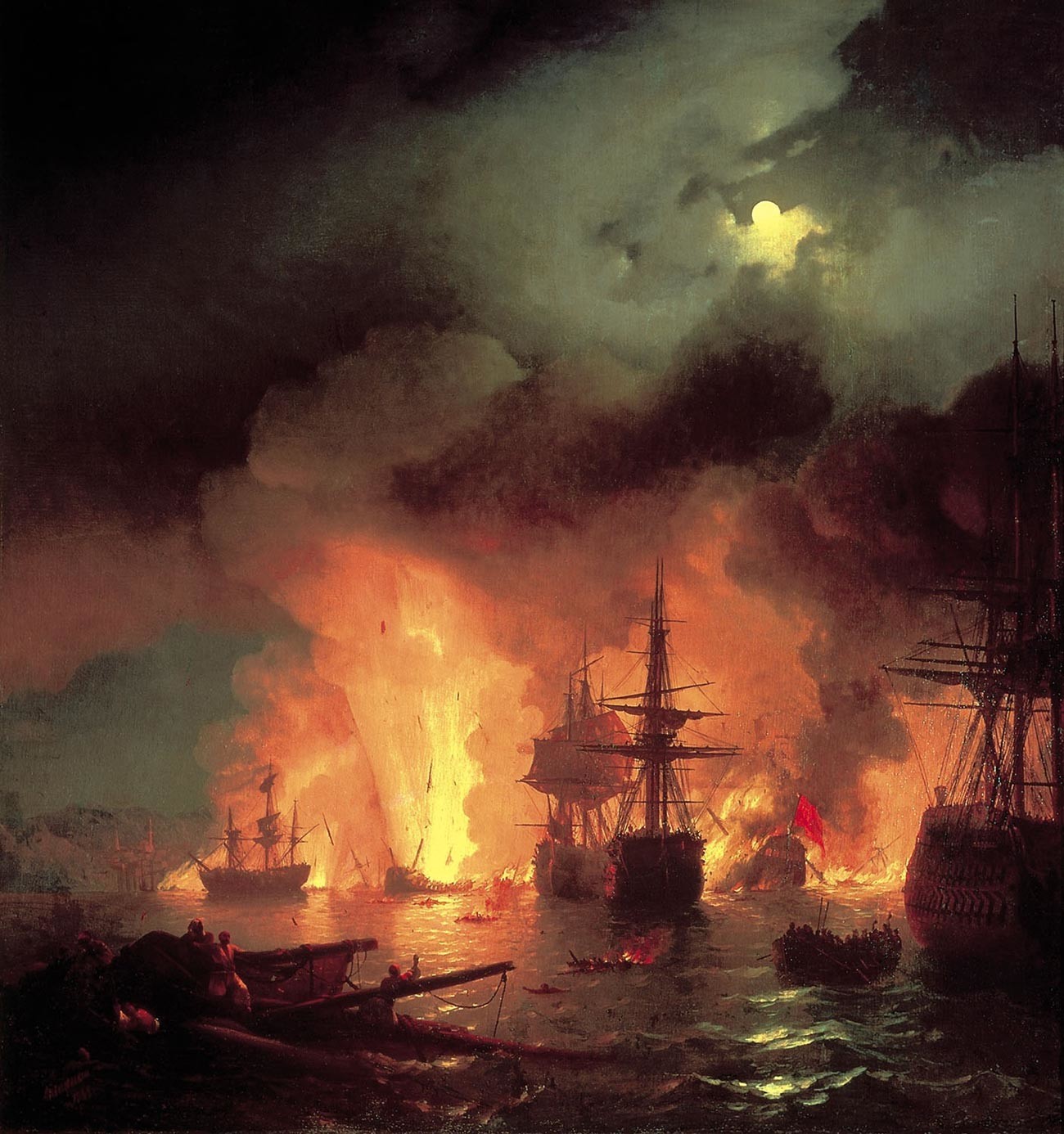 On July 7, 1770, during the Russian–Turkish war of 1768–1774, the Russian fleet won one of its greatest ever victories. As a result of the Battle of Chesme Bay, a significant part of the Ottoman fleet was destroyed. The Turks lost 15 battleships, six frigates and many smaller vessels. Of their 15,000-strong navy, almost 11,000 were killed. Henceforth, Russia was on the front foot. 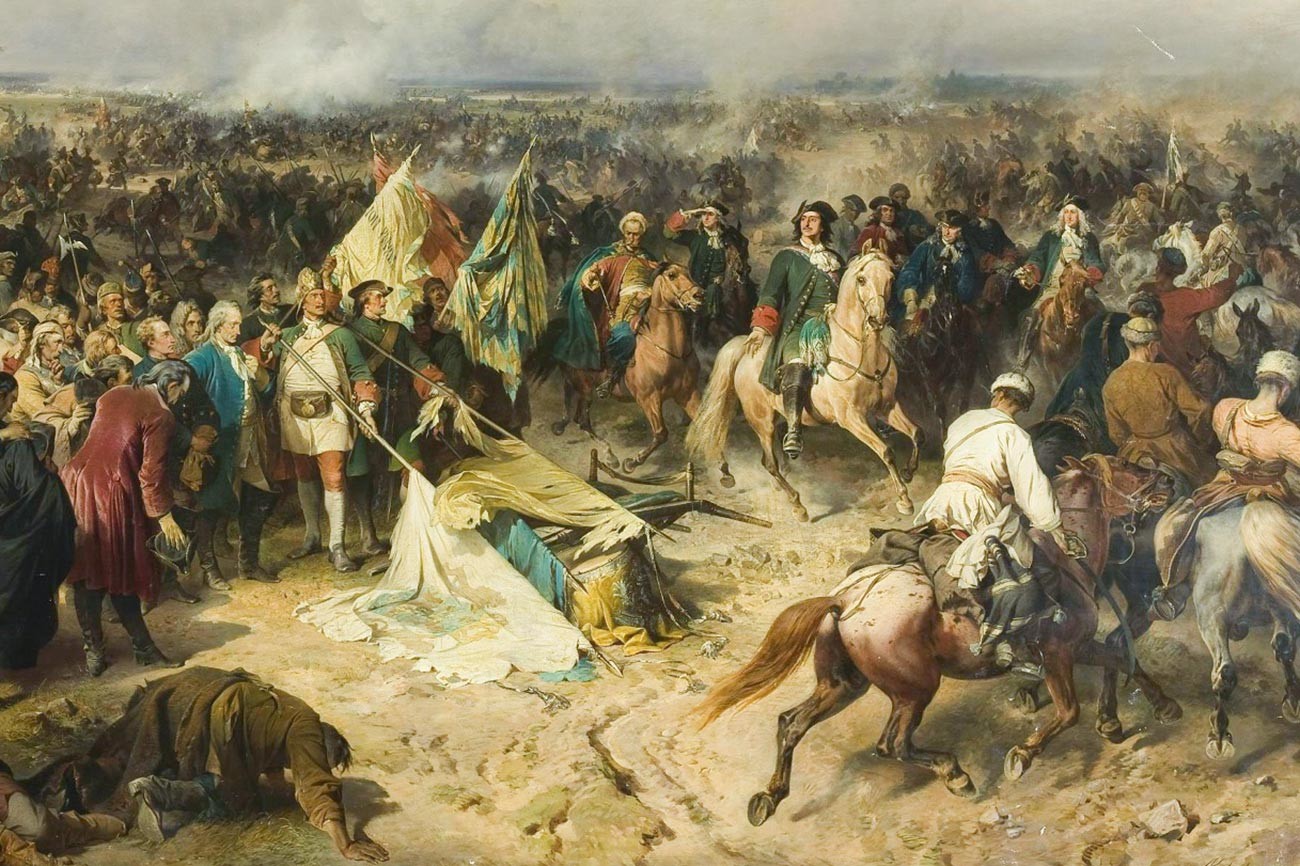 Alexander kotzebue. The Victory at Poltava.

Russia's victory in the Great Northern War of 1700–1721 over Sweden gave it a seat at the table of Great Powers for the first time. The key event was the Battle of Poltava on July 8, 1709 (the Day of Military Honor is celebrated on July 10). Soon after the defeat, the army of Charles XII of Sweden surrendered almost in its entirety, and the king himself was forced to seek refuge with the Turkish sultan.

Day of the First Naval Victory of the Russian Fleet under Peter the Great over the Swedes at Cape Gangut (Aug. 9) 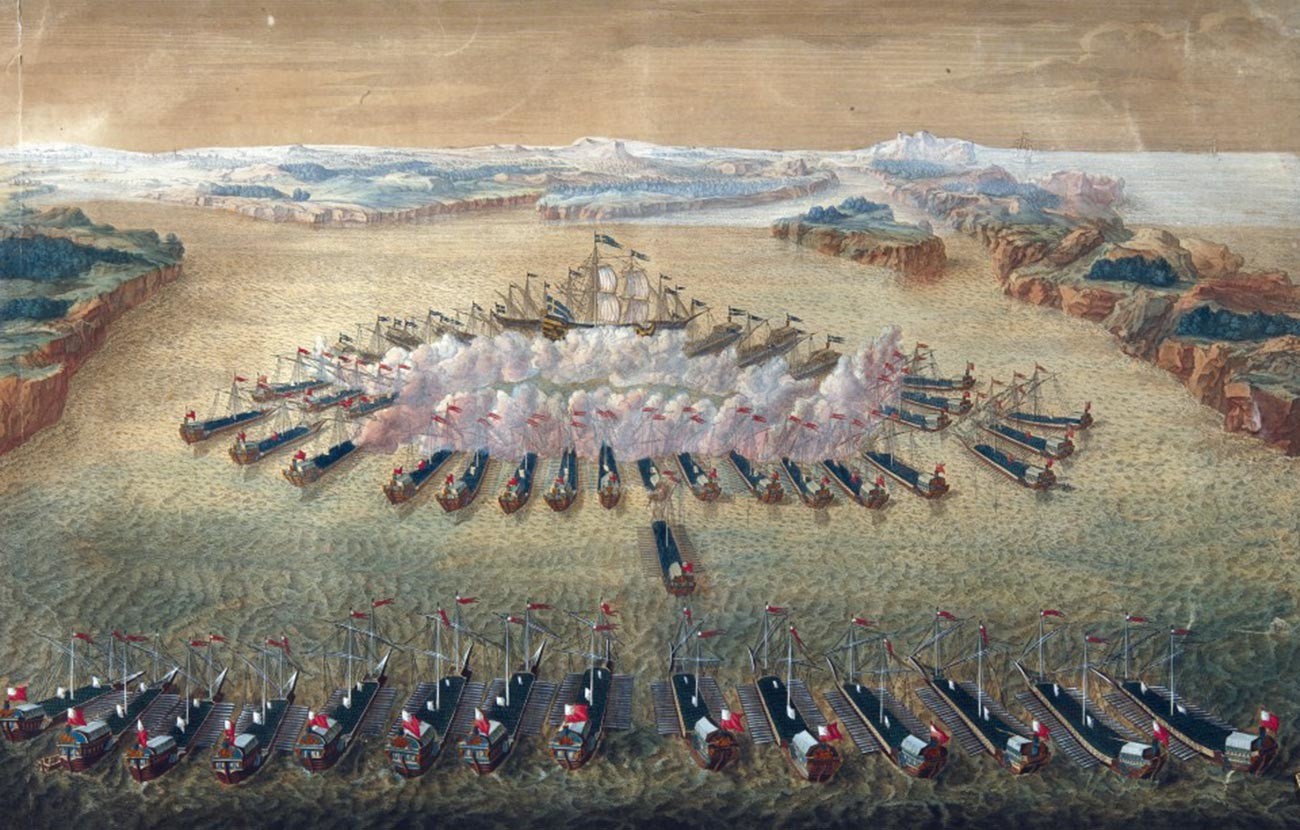 Maurice Baquoy. The Battle of Gangut.

Defeating the Swedes on land was only half the struggle; they still had to be annihilated at sea. On Aug. 7 (the Day of Military Honor is celebrated on Aug. 9), 1714, near Cape Gangut (Hanko Peninsula, modern Finland), the regular Russian fleet (then oar-powered) won its first victory in history. After his success at Poltava, Tsar Peter the Great again personally led his men to triumph over the Swedes.

Day of the Defeat of Nazi Troops in the Battle of Kursk (Aug. 23) 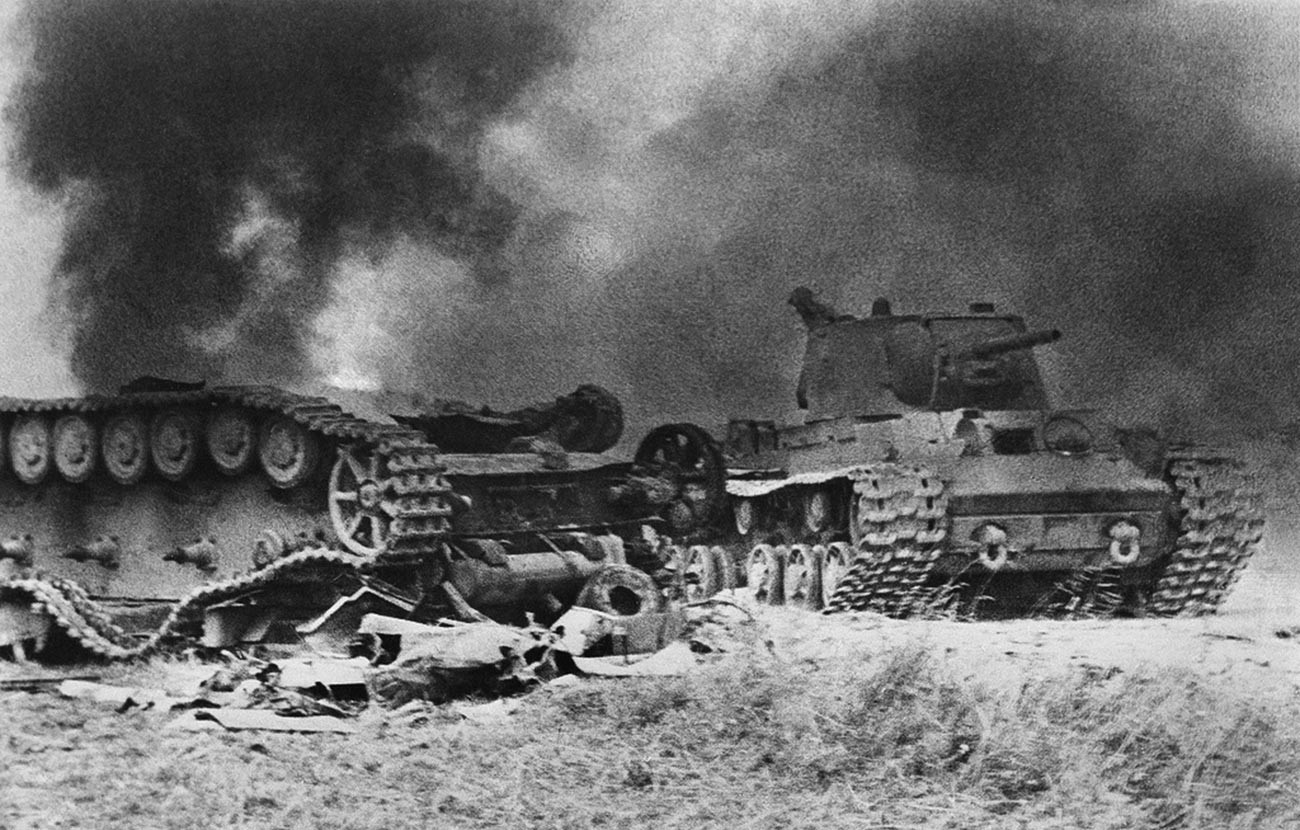 The Battle of Kursk.

If the Battle of Stalingrad marked the main turning point in WWII, then the Battle of Kursk consolidated it. Having withstood a powerful strike by German troops on the Kursk Salient in the summer of 1943, the Red Army launched a large-scale offensive on all fronts, seizing the strategic initiative once and for all. 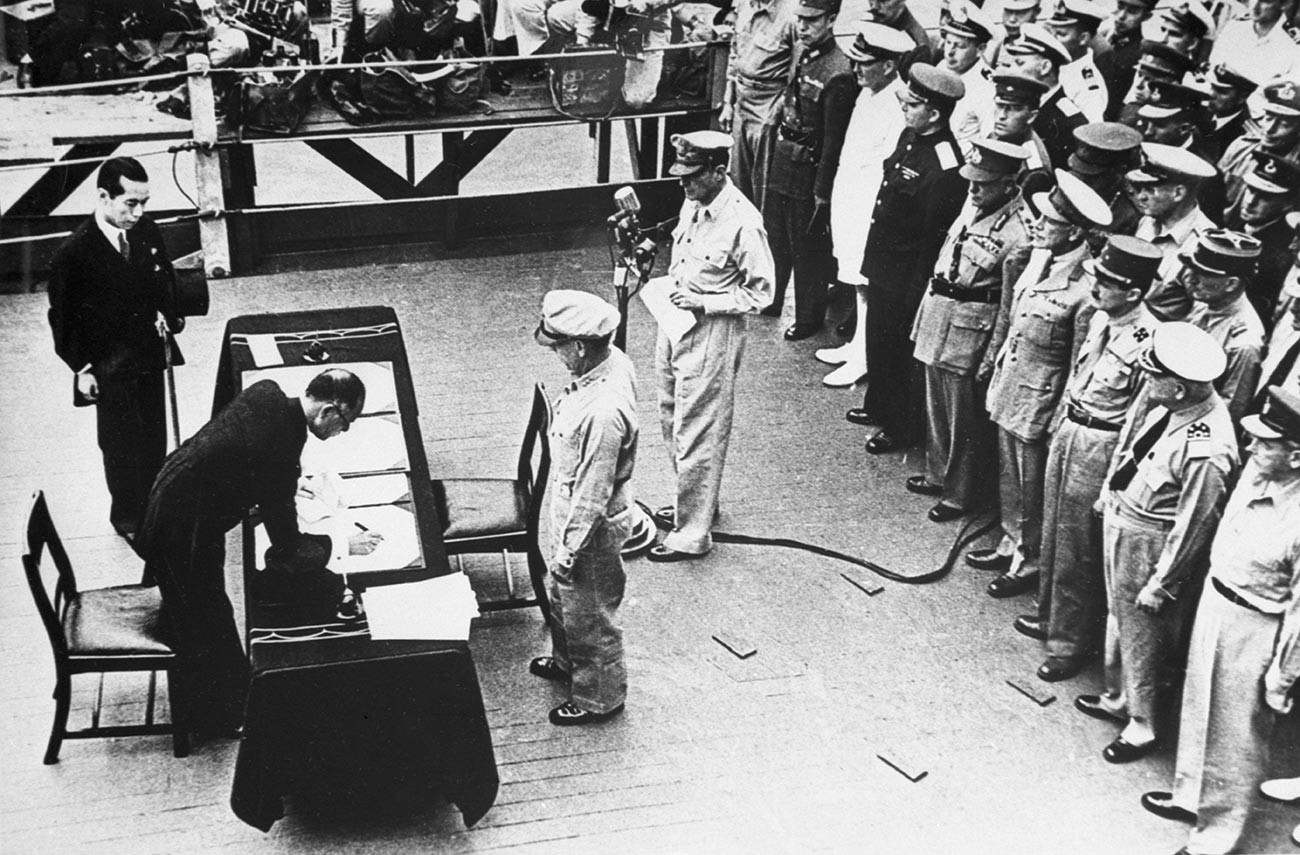 Signing of the Japanese surrender document aboard the U.S.S. "Missouri" in Tokyo Bay, Sept. 2, 1945.

On Sept. 2, 1945, Japan surrendered aboard the battleship USS Missouri, ending WWII. In the same year, the Supreme Soviet of the USSR declared Sept. 3 a holiday in honor of victory over Japan. In 2020, the Federal Law on Days of Military Honor and Memorable Dates of Russia was amended, establishing Sept. 3 as the Day of the End of World War II.

Day of the Battle of Borodino between the Russian Army under Mikhail Kutuzov and the French Army (Sept. 8) 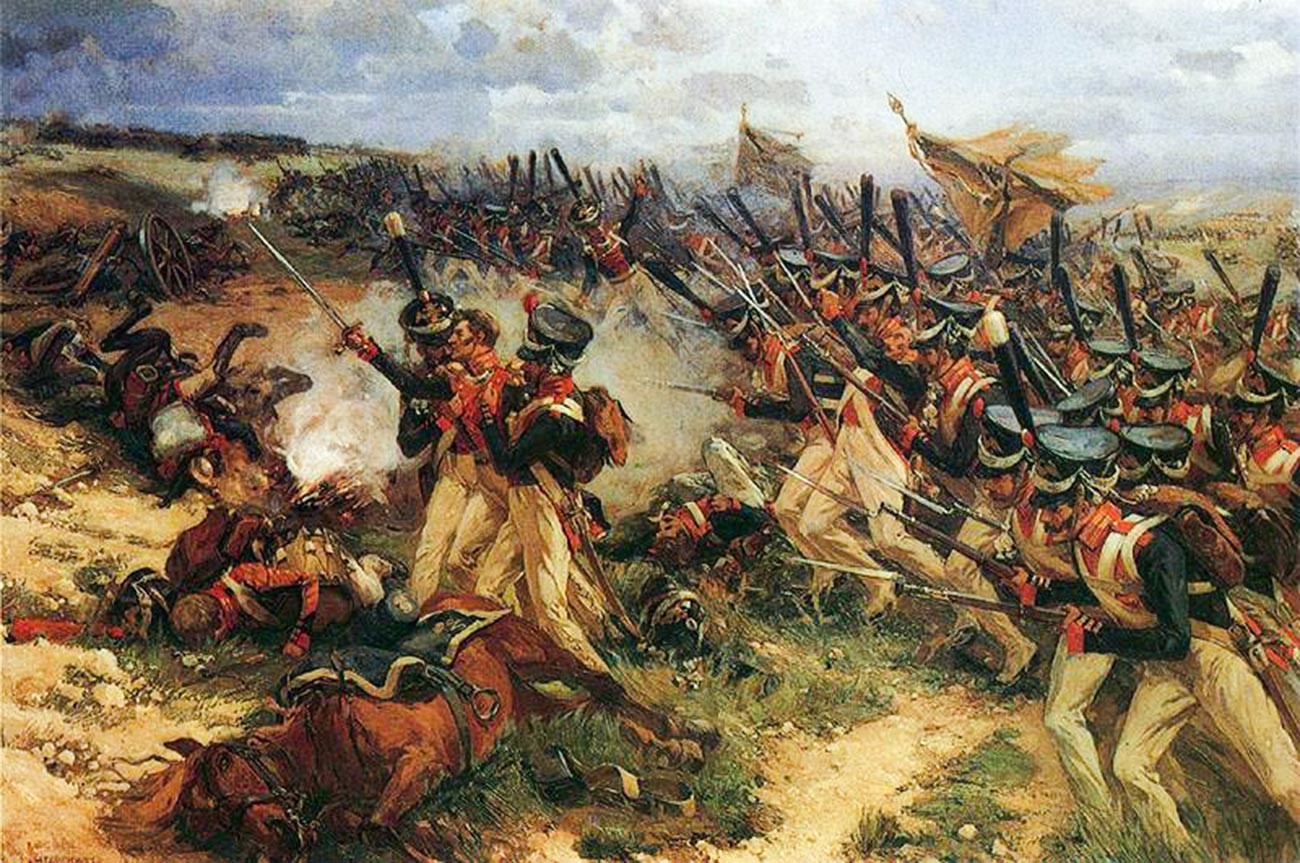 The Battle of Borodino.

“The Battle of Borodino was the most beautiful and the most terrible. The French showed themselves worthy of victory, while the Russians proved to be invincible,” Napoleon Bonaparte said about the famous battle near the village of Borodino outside Moscow on Sept. 7, 1812 (the Day of Military Honor is celebrated on Sept. 8). Contrary to expectations, above all his own, the French emperor did not crush the Russian army in the pitched battle, which ultimately doomed his Russian campaign to failure.

Day of Victory of the Russian Squadron under Fyodor Ushakov over the Turkish Squadron at Cape Tendra (Sept. 11) 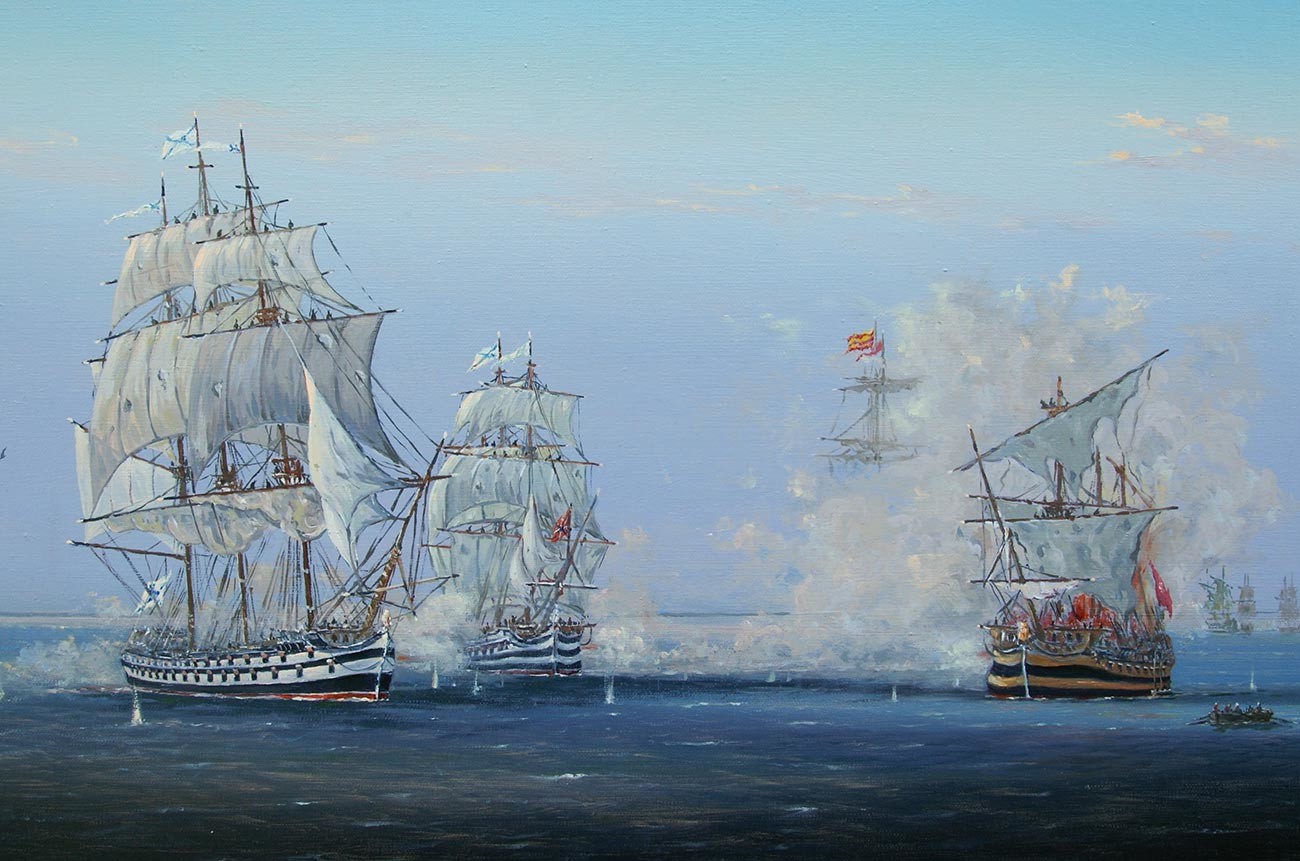 The Battle of Tendra.

During this two-day naval battle at Cape Tendra on Sept. 8–9 (the Day of Military Honor is celebrated on Sept. 11), 1790, the Russian navy defeated the superior Turkish fleet. Combined with its land victories, this triumph ensured Russia’s triumph in the war against the Ottoman Empire of 1787–1791, significantly expanding its influence in the northern Black Sea region, the Caucasus and the Balkans as a consequence.

Day of Victory of Russian Regiments under Grand Duke Dmitry Donskoy over Mongol-Tatar Troops in the Battle of Kulikovo Field (Sept. 21) 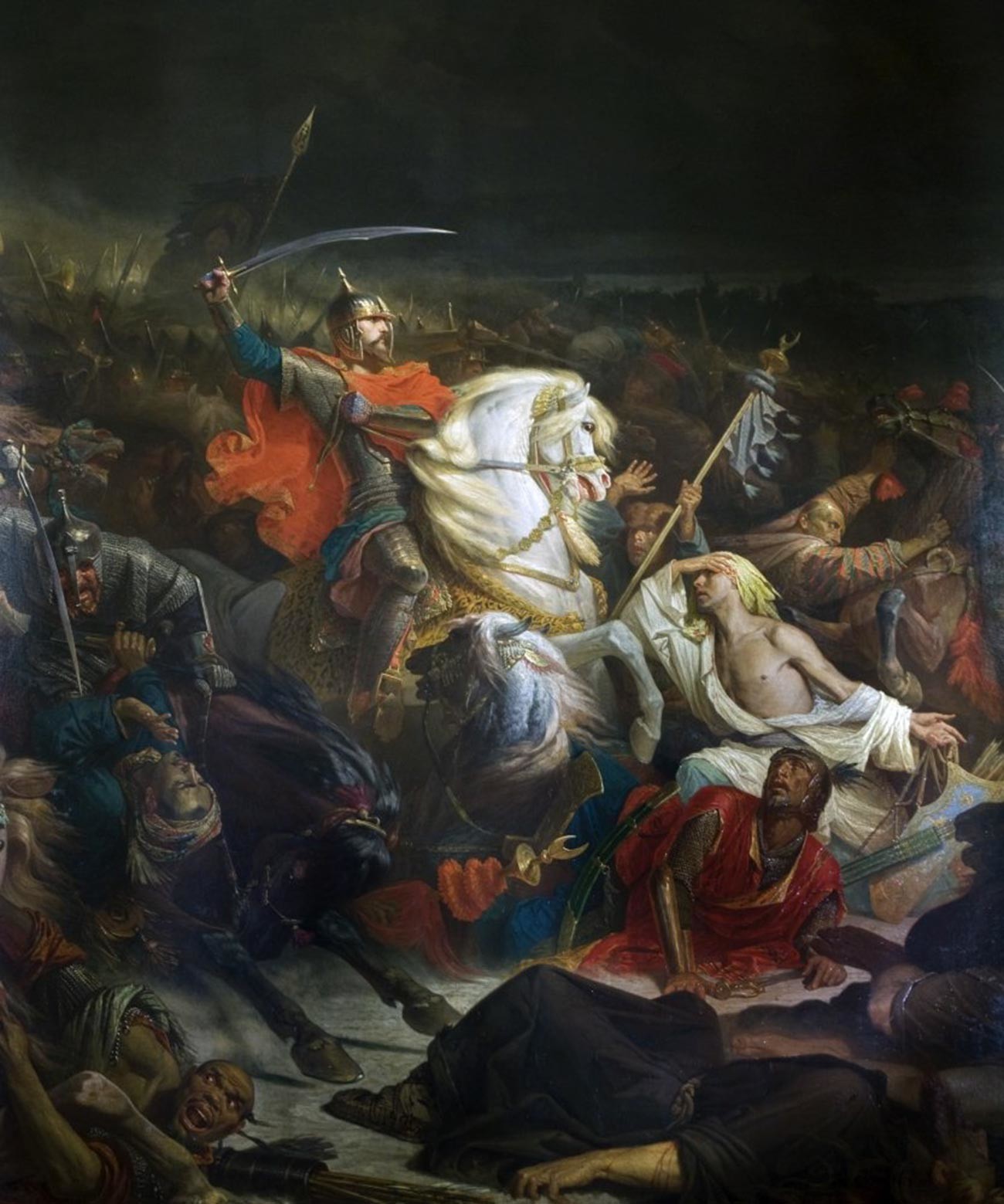 The Battle of Kulikovo.

On Sept. 8 (the Day of Military Honor is celebrated on Sept. 21), 1380, Prince Dmitry Donskoy of Muscovy defeated the troops of the Golden Horde under the temnik (military leader) Mamai, then at the pinnacle of its power, in the Battle of Kulikovo Field. This victory seriously weakened the Mongols’ grip on Russia and strengthened Muscovy as a focal point for unification of the divided Russian lands. All the same, the khans continued to rule over them for another another century.

Day of the Defeat of Nazi Troops in the Battle of the Caucasus (Oct. 9) 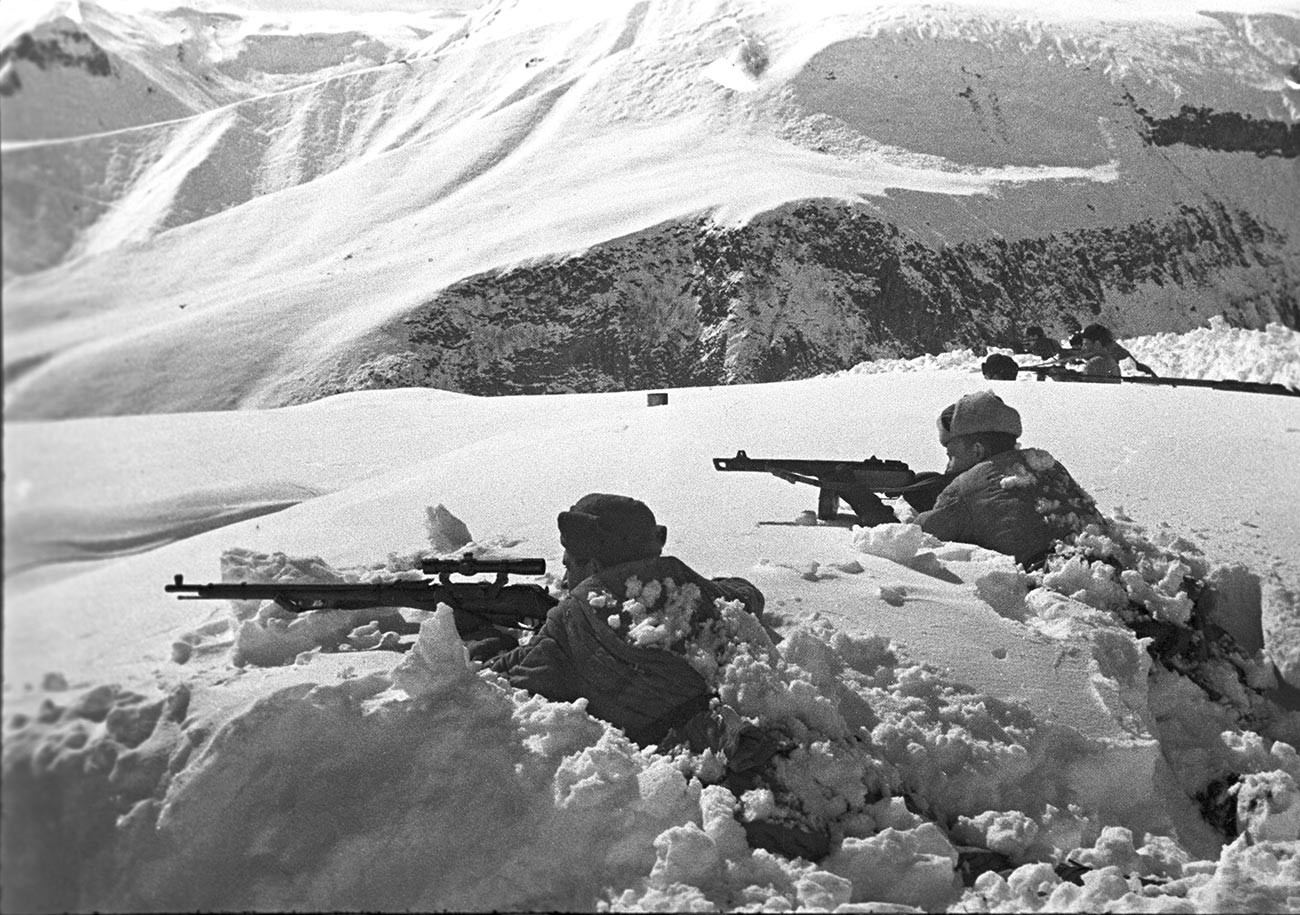 Soviet soldiers during the Battle of the Caucasus, 1942.

The Caucasus were a key strategic target for the German command in 1942: seizing its oilfields would have enabled Germany to deliver an even mightier blow to the Soviet Union. Nevertheless, the Red Army, having resisted the joint German-Romanian offensive, succeeded in expelling the enemy from the region. The date Oct. 9, 1943, when the 56th Soviet Army broke through to the Kerch Strait between the Taman and Crimean peninsulas, marked the end of the Battle of the Caucasus.

National Unity Day (in honor of the liberation of Moscow by a people’s militia under Kuzma Minin and Prince Dmitry Pozharsky (Nov. 4)) 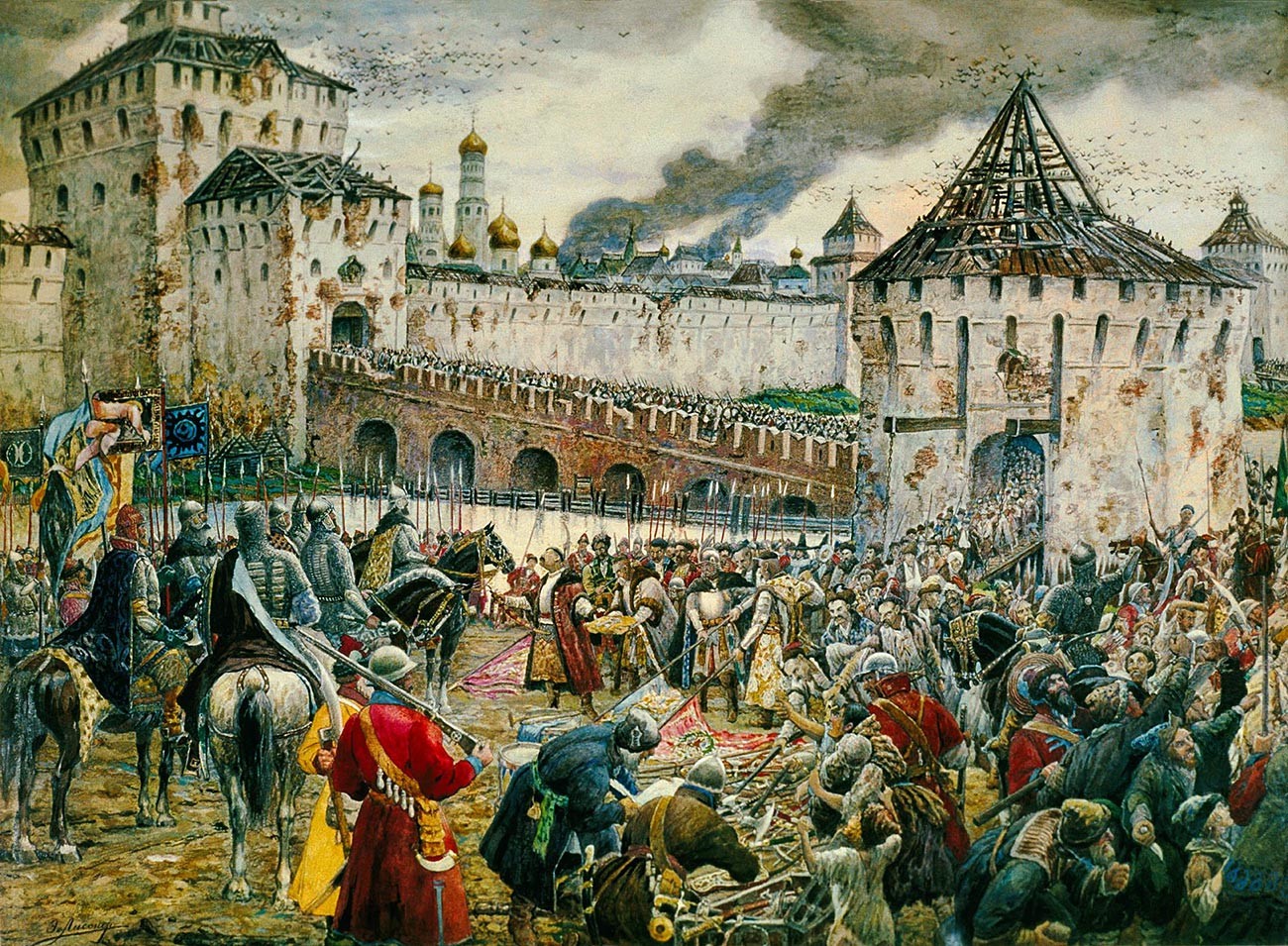 Ernst Lissner. The Poles surrender the Moscow Kremlin to Prince Pozharsky in 1612.

During the major political and economic crisis in the 17th century Russia known as the Time of Troubles, some members of the nobility (boyars) recognized the Polish prince Vladislav as tsar and allowed a Polish–Lithuanian garrison to occupy Moscow. A people’s voluntary militia led by Prince Dmitry Pozharsky and the merchant Kuzma Minin, who opposed the occupation, defeated the invaders and liberated the Russian capital. In memory of those events, Nov. 4 is not only a Day of Military Honor, but also National Unity Day.

Day of the Military Parade on Red Square in Moscow to Commemorate the 24th Anniversary of the Great October Socialist Revolution (Nov. 7) 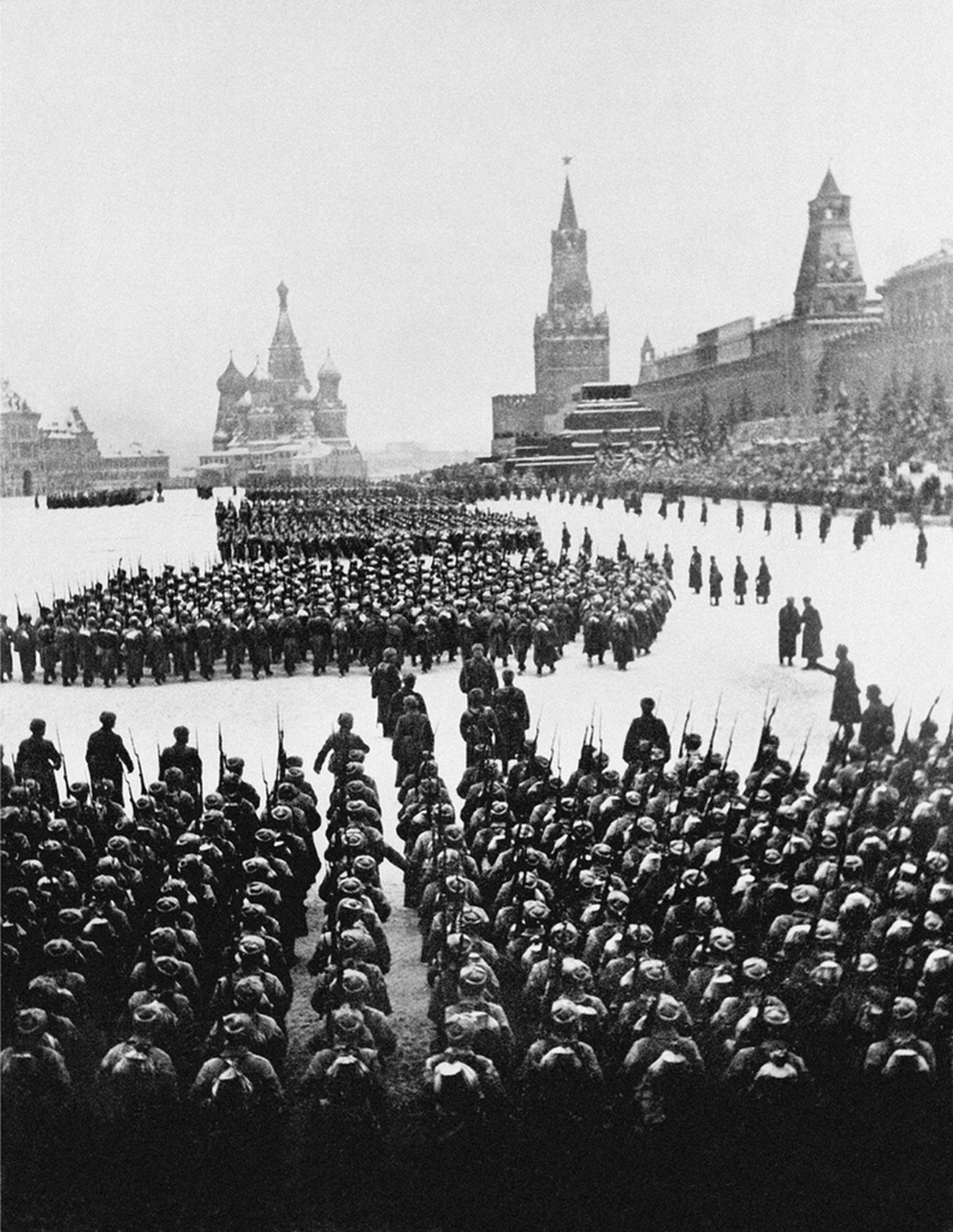 The military parade on Red Square on November 7, 1941.

On Nov. 7, 1941, at the height of the pivotal Battle for Moscow, when the Germans were a stone’s throw from the Soviet capital, the Red Army marked the 24th Anniversary of the Revolution with a military parade, after which many units marched straight from Red Square into the jaws of frontline combat. The parade showed the world that, despite the efforts of German propaganda, the Soviet Union was not broken and would fight to the bitter end.

Day of Victory of the Russian Squadron under Pavel Nakhimov over the Turkish Squadron at Cape Sinop (Dec. 1) 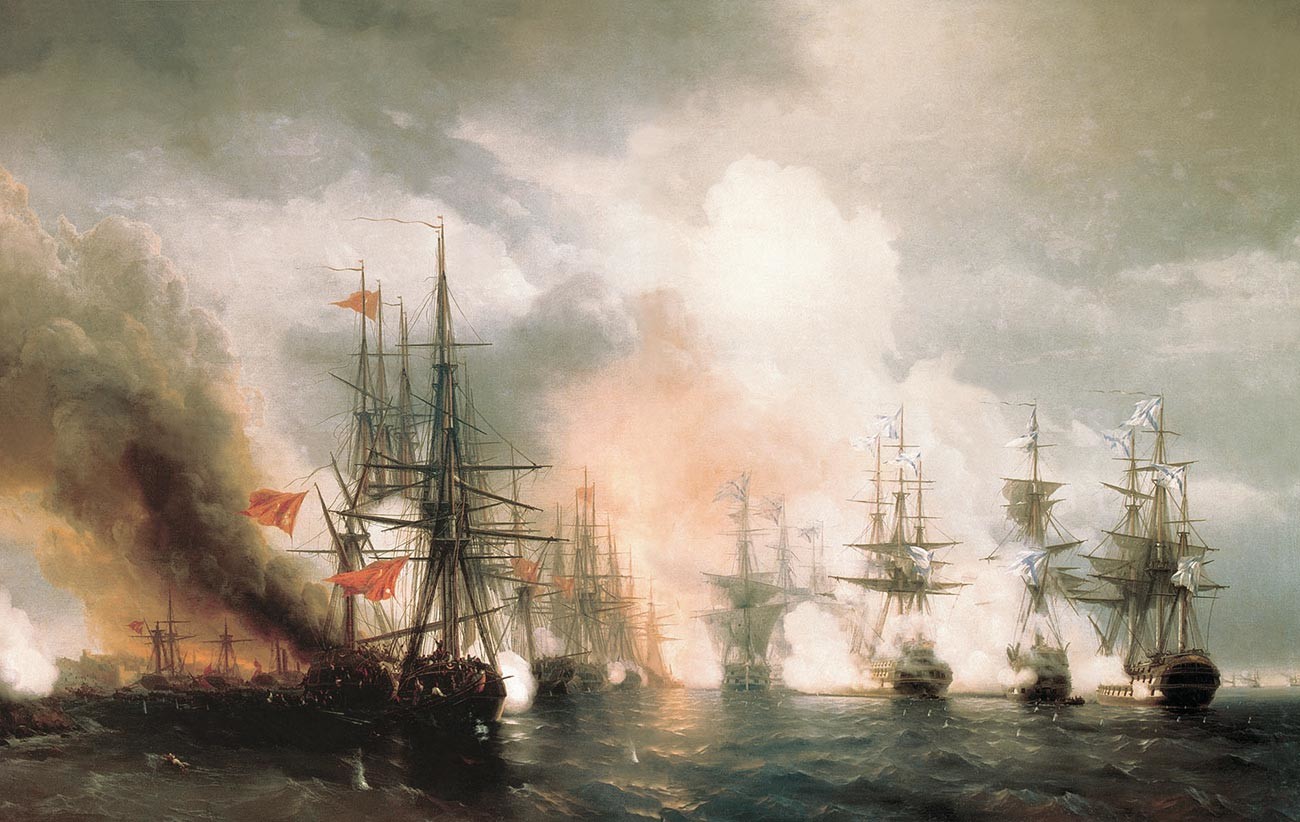 Ivan Aivazovsky. The Battle of Sinop.

On Nov. 30, 1853 (the Day of Military Honor is celebrated on Dec. 1), during the Crimean War of 1853–1856, in the harbor of the city of Sinop, Turkey, the Russian fleet decimated a squadron of the Ottoman Empire. Russia’s brilliant victory in the last ever military engagement between sailing ships jolted the British and the French into entering the conflict on the side of the Turks. Facing a coalition of powers, Russia ultimately lost the war.

Day of the Commencement of the Soviet Counter-Offensive against Nazi Troops in the Battle of Moscow (Dec. 5) 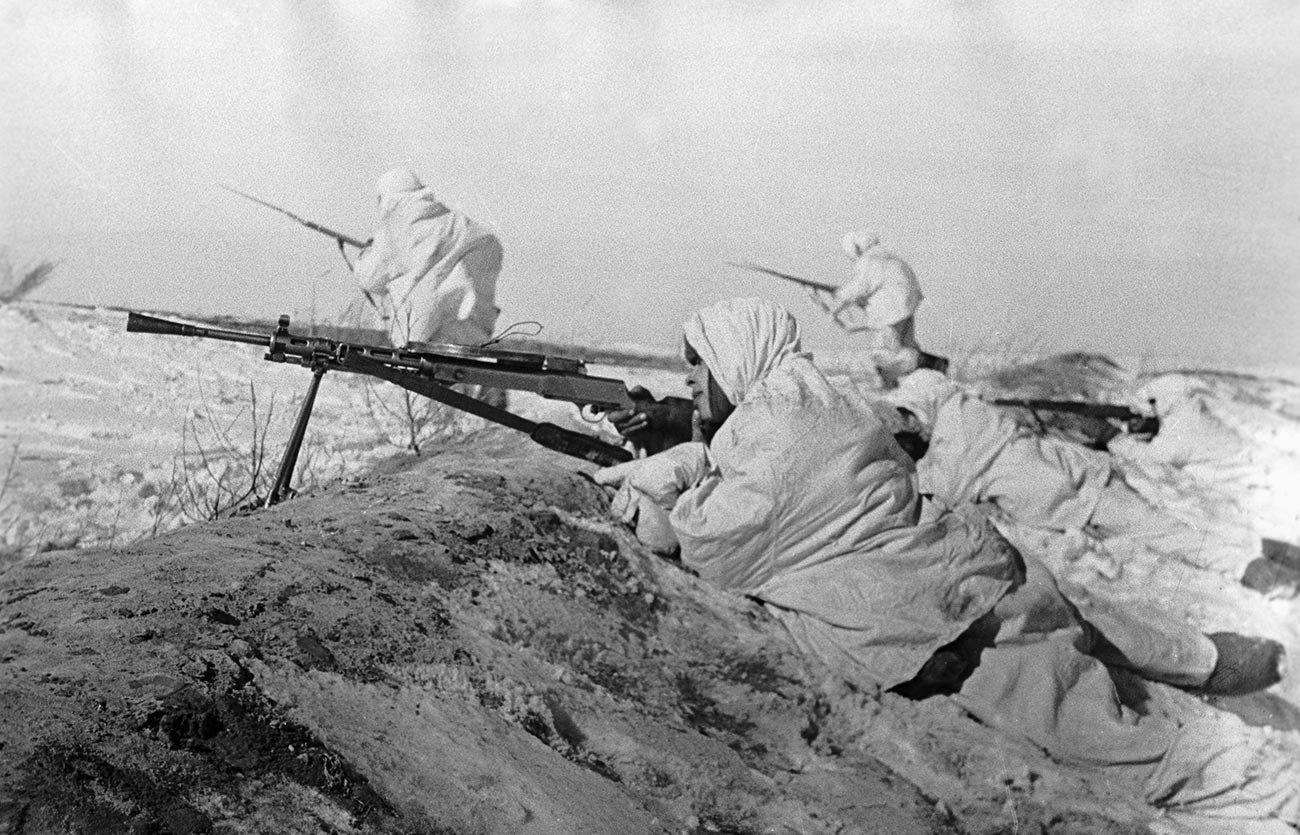 Throughout October–November 1941, there was fierce fighting on the outskirts of the Soviet capital, as the Red Army strained every sinew to hold Moscow. Finally, on Dec. 5, 1941, having exhausted the enemy, and with fresh divisions from Siberia and the Far East, the Soviets launched a massive counter-offensive, throwing back the stunned invaders several hundred kilometers from the Soviet capital. It was the Wehrmacht’s first shocking defeat of WWII, and it never fully recovered psychologically.

Day of the Seizure of the Turkish Fortress of Izmail by Russian troops under Alexander Suvorov (Dec. 24) 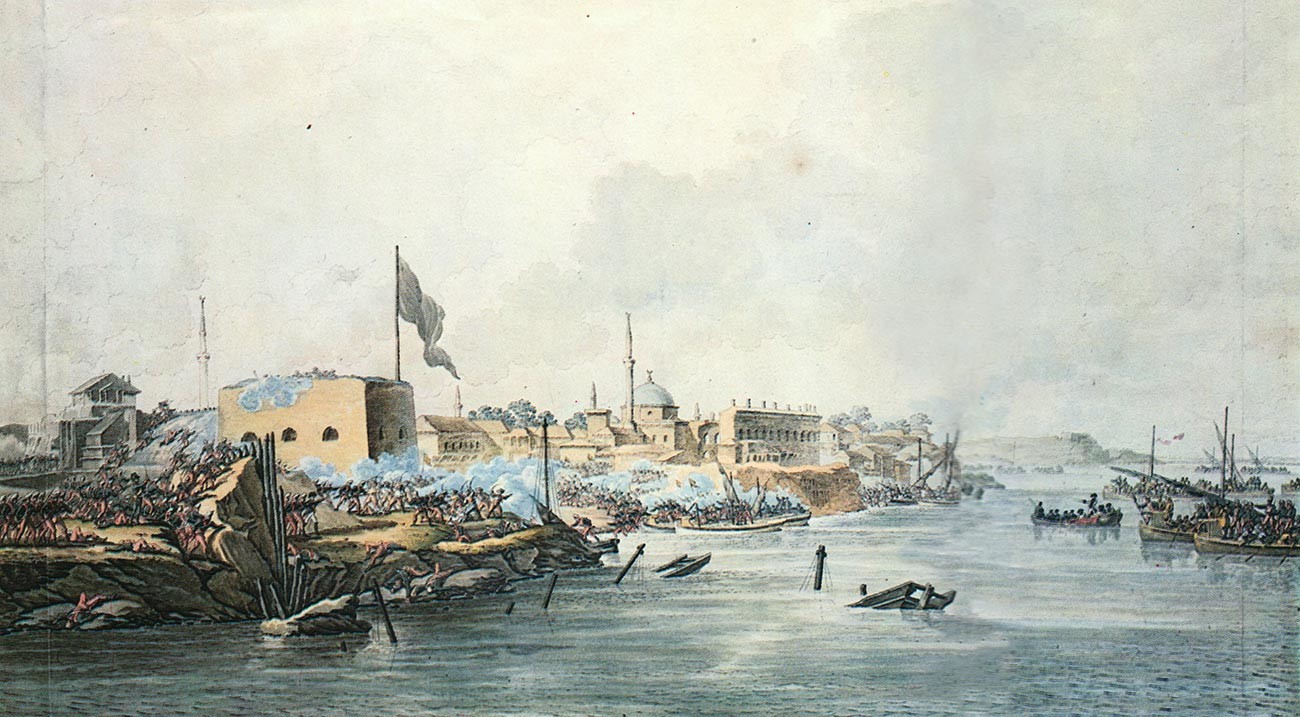 “The decision to storm such a fortress can only be taken once in a lifetime,” said the finest commander in Russian military history, Alexander Suvorov, about the capture of the Turkish stronghold of Izmail. Shortly before the assault, he ordered the construction of an exact replica of the ditches, ramparts and walls of the fortress for training purposes. On Dec. 22 (the Day of Military Honor is celebrated on Dec. 24), 1790, Russian troops took the seemingly impregnable citadel, with 2,000 killed versus Ottoman losses of 26,000.