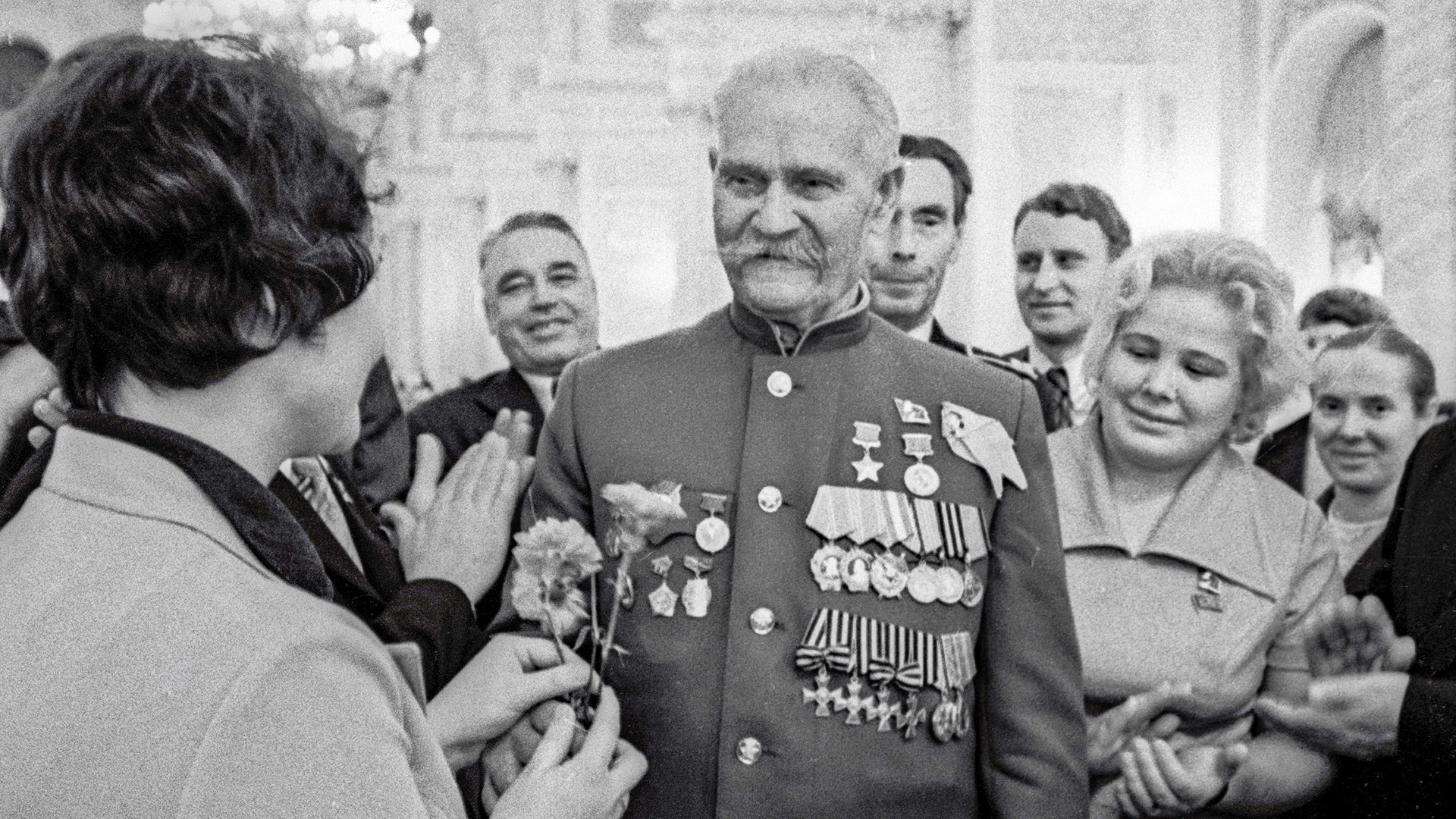 Konstantin Nedorubov, Hero of the Soviet Union, in 1977.

Yuri Somov/Sputnik
Some of them openly wore tsarist awards along with Soviet ones on their chests. Although, officially, that was never permitted.

Many soldiers of the tsarist army, having fought in World War I, later participated in World War II, too. Some of them had their bravery in battle recognized with military decorations of the Russian Empire - Crosses of St. George of four classes – as well as with Soviet orders and medals.

There were also those who, having been awarded the highest military decorations of the Russian Empire in WWI, went on to receive the highest military honors of the Soviet Union during WWII. They were awarded St. George Crosses of all four classes, thus becoming Full Cavaliers of St. George Cross in WWI, and then became Heroes of the Soviet Union for their valor in the war against Nazi Germany. 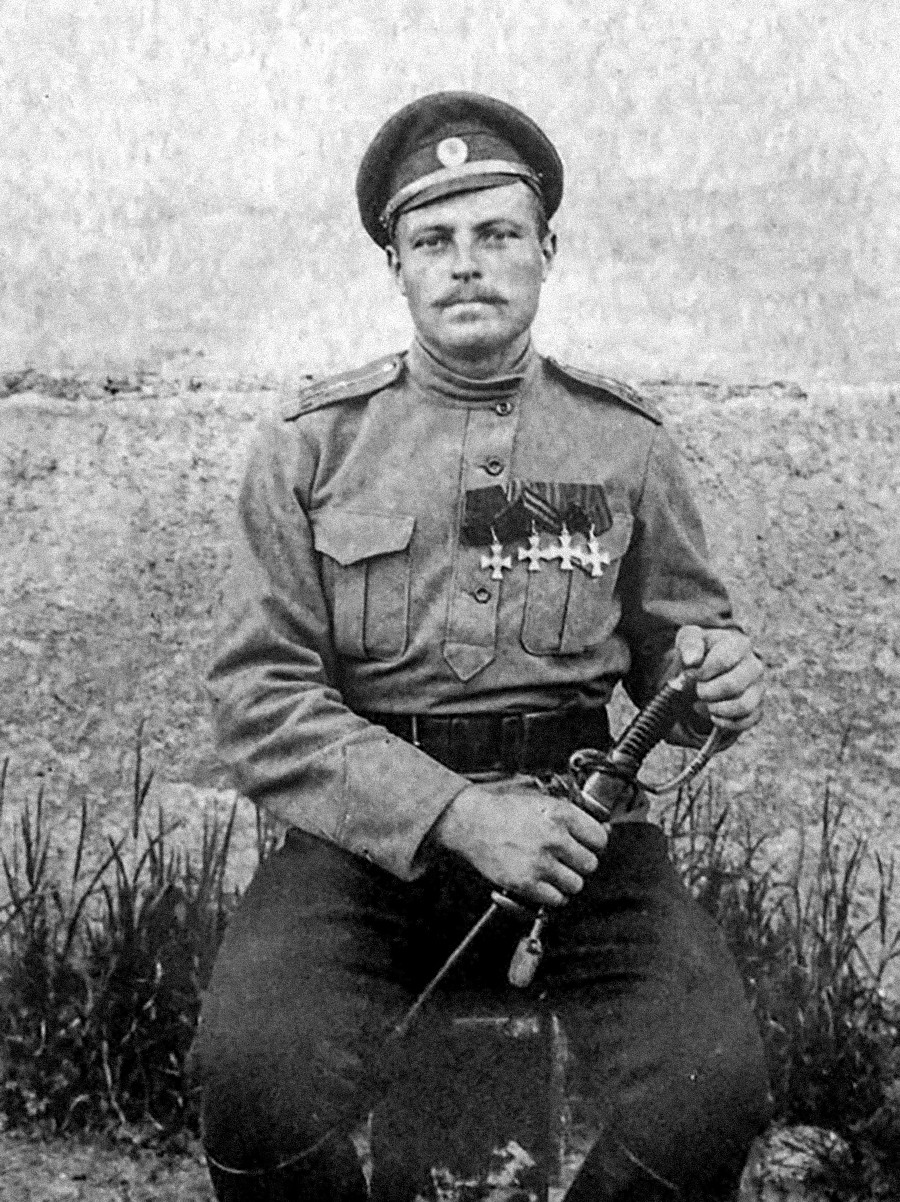 “Of medium height, unusually thickset, but, at the same time, well-built, when in the saddle, Ivan Vladimirovich turned into a real centaur, as if merging with the horse,” was how one of the fellow servicemen recalled cavalryman of the 5th Dragoon Kargopol Regiment Ivan Tyulenev.

He earned his first Cross of St. George 4th class, the lowest of the four, when, on July 14, 1915, together with two comrades, he attacked a numerically superior German patrol, hacked down 11 enemy soldiers and took three more prisoners. In subsequent battles, he earned three more Crosses of St. George and the rank of a non-commissioned officer.

At the time of the German invasion of the Soviet Union in June 1941, General Ivan Tyulenev was in charge of the Southern Front. Same as with all Soviet military leaders, the initial period of the war was disastrous for him. “He does not know how to attack, but he does not know how to retreat, either. He has lost two armies in a way that regiments aren’t lost,” was Stalin’s unflattering opinion of Tyulenev at the time. 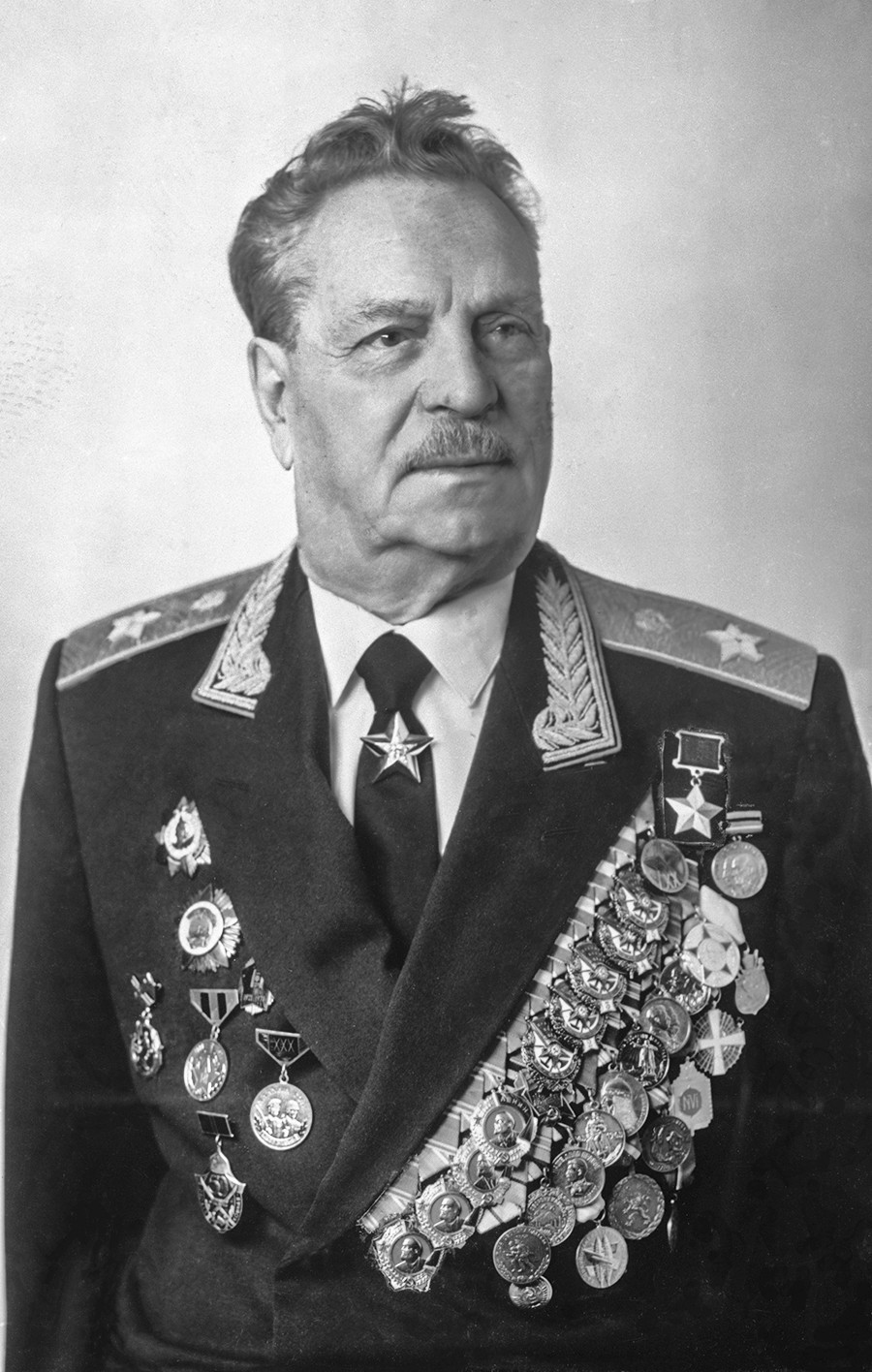 Ivan Vladimirovich was sent to the Urals to train reserve divisions, which, in turn, he did very well. The peak of his military career was the position of the commander of the Transcaucasian Front, whose troops prevented the enemy from seizing the Caucasus and gaining access to the oil fields near Baku and Grozny.

Despite his achievements, Tyulenev had to wait for the title of Hero of the Soviet Union for a long time. “I should have probably first surrendered the Caucasus and then liberated it. Then, the work of the front commanders would have received a higher assessment,” Ivan Vladimirovich wrote with a touch of bitterness. It was only in 1978, just a few months before Tyulenev’s death at the age of 86, that he was finally given the highest Soviet military honor.

On a clear August day at the very beginning of World War I, a group of Don Cossacks, under a barrage of artillery fire from the enemy, fought its way to where the Austrian battery was based and captured it, together with servants and ammunition. That was how Sergeant Konstantin Nedorubov, who commanded the Cossacks, earned his first Cross of St. George. 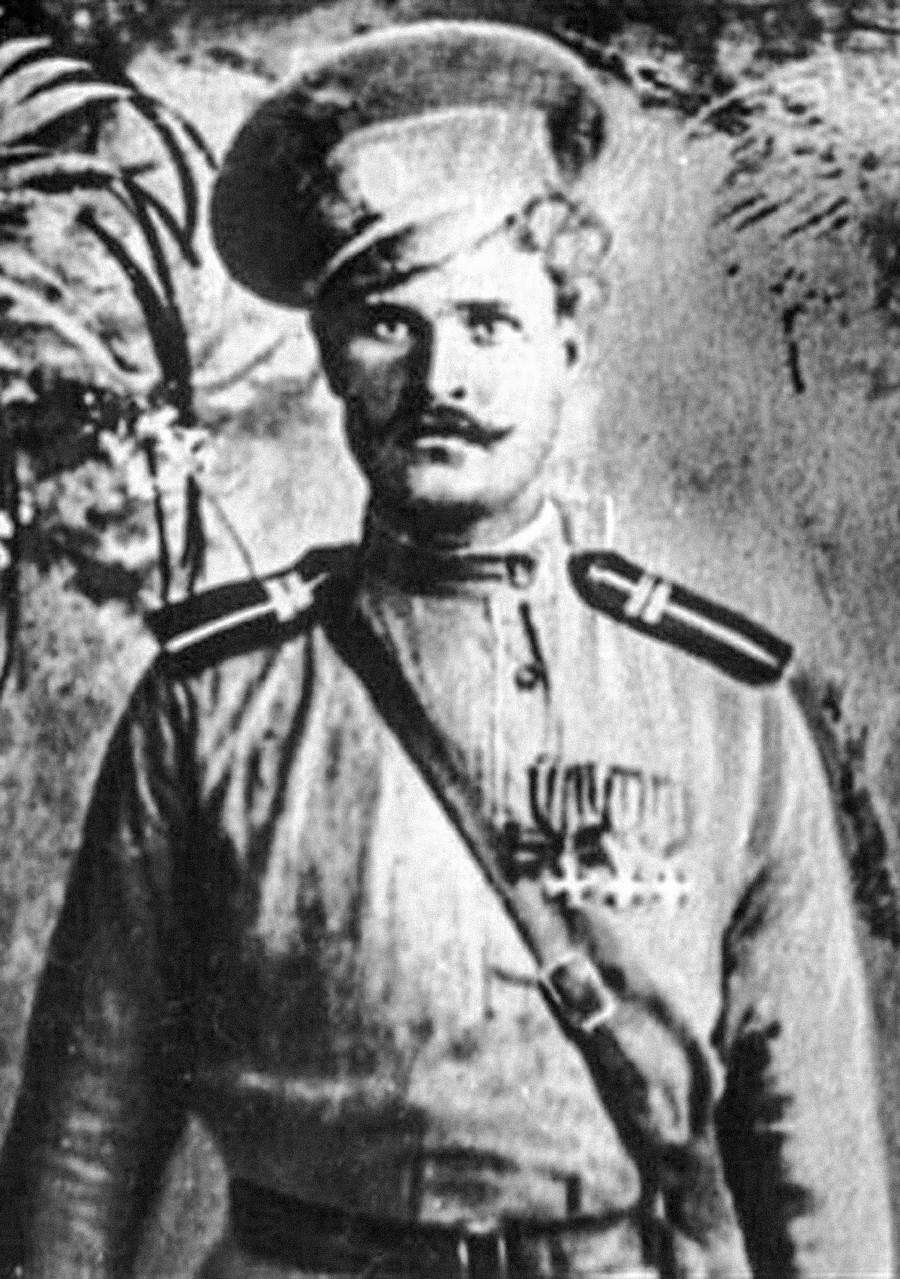 Later, he earned three more St. George Crosses: for capturing 52 Austrian soldiers with an officer and for capturing the German headquarters with important documentation. Konstantin Iosifovich was also recognized for the courage and valor he displayed during the large-scale offensive operation of the Russian army in 1916, which became known as the Brusilov Offensive.

Interestingly, during the Russian Civil War, the future Hero of the Soviet Union fought (same as many other Don Cossacks) on the side of the Whites. However, having been captured by the Reds, he went over to their side. Soon, Nedorubov was again taken prisoner, this time by the Whites. Luck was on his side: in recognition of his military achievements, the Full Cavalier of St. George Cross was spared execution.

At the outbreak of the war between the USSR and Nazi Germany, Konstantin Iosifovich tried to enlist, but was rejected, due to his advanced years: he was already in his fifties. “Young soldiers are dying in their thousands because they are inexperienced. Whereas, I got four Crosses of St. George in the war with Germans. So I know how to fight them,” Nedorubov reacted emotionally. In the end, in the fall of the same year, he managed to join the Don Cossack Cavalry Division, in which he became a squadron commander. 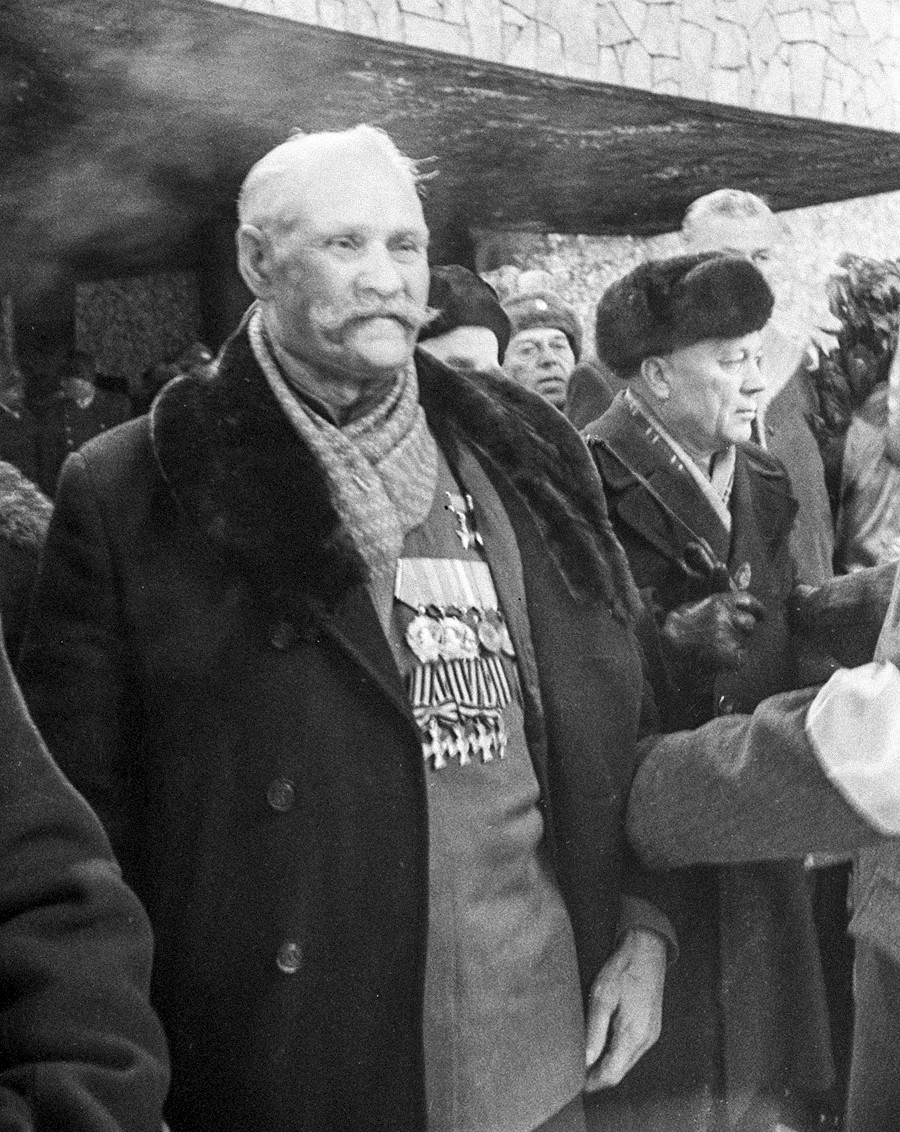 An experienced cavalryman, Nedorubov turned his unit into a close-knit combat unit that was equally effective both in defense and in attack. The squadron killed hundreds of enemy soldiers and officers. In a battle near the village of Maratuki alone, Konstantin Iosifovich himself killed 70 Germans.

In 1943, Konstantin Nedorubov was awarded the title of Hero of the Soviet Union. He survived the war and died in 1978 at the venerable age of 89.

When, in 1915, Grigory Ageyev left home for the front to “beat the Germans”, he was not yet 14 years old. However, his young age did not prevent him from soon becoming a Full Cavalier of the St. George Cross.

Ageyev received his first St. George Cross for sneaking into a German trench, stealing a machine gun with ammunition and dragging it back to the Russian positions. Subsequently, too, Grigory Antonovich invariably demonstrated courage and dedication at the front: as part of a machine-gun unit, he remained in battle for months. Ageyev ended the war as a senior non-commissioned officer with four St. George Crosses on his chest. 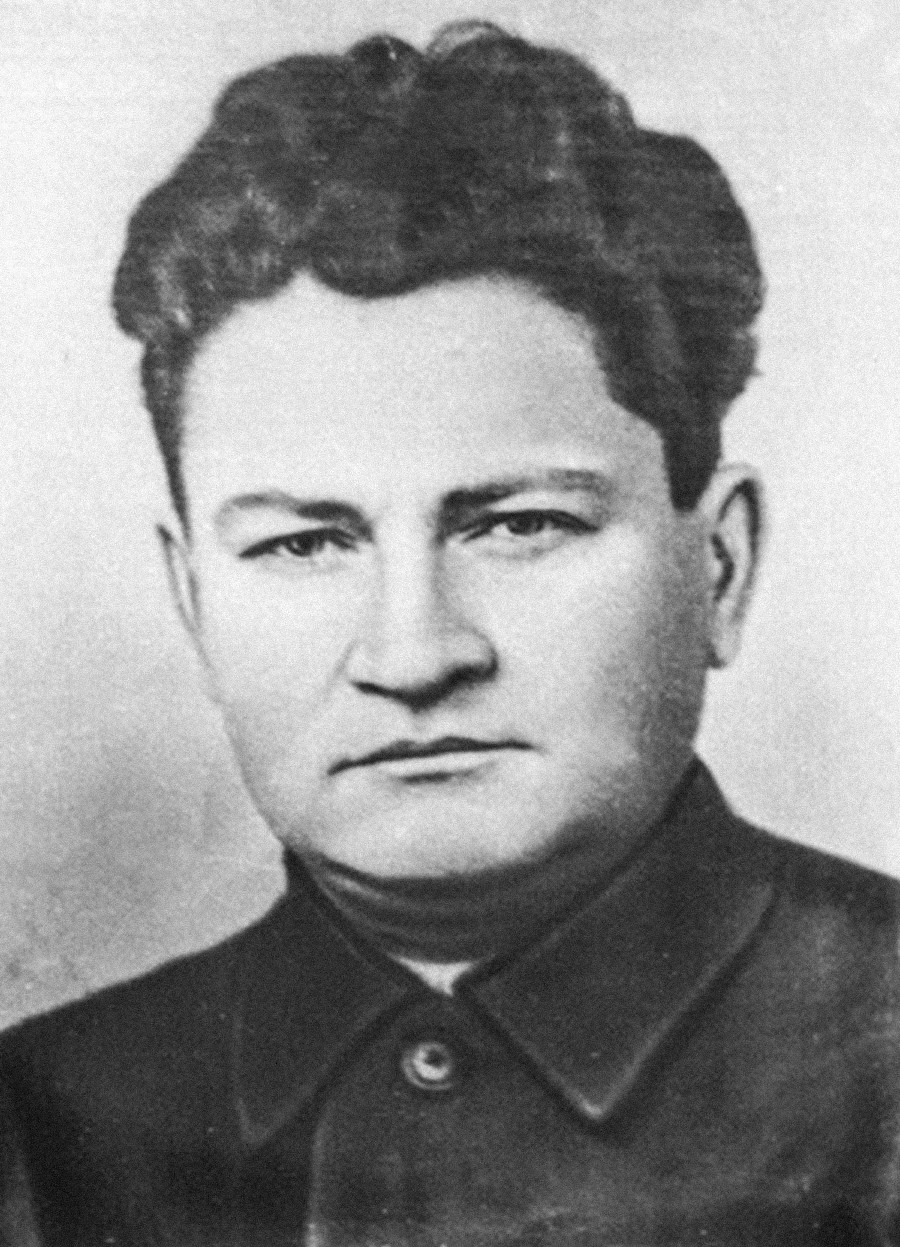 During World War II, Ageyev became one of the founders of the fighter battalions of the Tula people’s militia. These volunteer formations consisted of Soviet citizens, who were not subject to priority conscription and were fighting against enemy saboteurs and spies and catching deserters and marauders behind enemy lines. On October 26, 1941, the battalions were consolidated into a single Tula Workers’ Regiment.

Tula, located south of Moscow, played a crucial role in the defense of Moscow in the fall of 1941. It was through it that Heinz Guderian’s 2nd Panzer Army was trying to make its way to the capital in a bid to close the encirclement of the main Soviet city from the southeast.

During fighting for the city, Ageyev, who became the commissar of the workers’ regiment, was always on the front line, supporting newly enlisted soldiers, who had no experience of the front, leading troops into battle, providing cover for the retreat of the 50th Army to new battle lines. However, Grigory Antonovich did not have long to fight - on October 30, he was killed by machine-gun fire.

“The death of the commissar was felt acutely by the entire regiment,” recalled the commander of the 50th Army, General Ivan Boldin. “The small grove where his body lay was already behind enemy lines. How to retrieve it so as to bury him with military honors? Three brave volunteers crawled into the trench already captured by the enemy and, risking their lives, stole Ageyev’s dead body literally from under the Nazis’ noses and brought him to Tula.”

Grigory Ageyev was awarded the title of Hero of the Soviet Union posthumously on May 8, 1965, on the eve of the 20th anniversary of the victory in the war.