How women voted in Russia for the first time 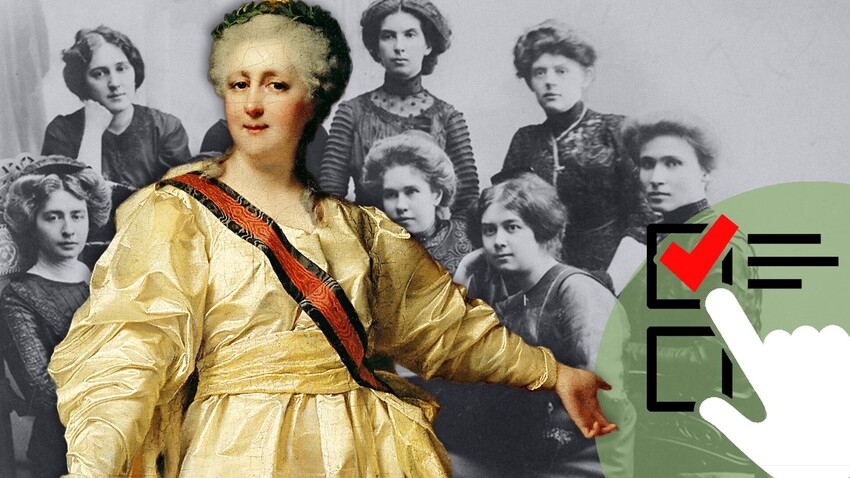 Russia Beyond (Photo: Dmitry Levitsky/Tretyakov Gallery; Public domain; russiainphoto.ru)
The subjection of women in Russia, even noble ones, is a well-known stereotype. But did you know that Russian noblewomen had the right to vote as early as the mid-18th century? Even though those voting rights were incomplete and passive, women could, nevertheless, influence the outcome of the elections of nobility in counties and provinces.

“One way of augmenting a party's strength is to secure more ladies' authorizations. To that end, long before the elections, heads of parties and their active associates receive all sorts of female landowners, who own at least 100 serfs. Those are mostly old maids or widows. They visit those living in the country in person, even make new acquaintances, try to influence them through relatives, they are effusively courteous with those ladies, assuring them of their loyalty and the sanctity of their cause, and then obtain from them blank letters, where the name and the patronymic of the gracious sir to whom the ball is entrusted it to be filled in. All this sometimes costs considerable trouble and expense, but ambitious people spare nothing,” 19th century Russian writer Vasily Selivanov recalled. The ball he mentions means a vote: back then voting was carried out by placing a ball in a box with two holes – "elected" or "not elected".

What kind of elections were they? The quote refers to the participation of women landowners with their "authorizations", that is delegation of their vote, in nobility elections. This was in the 19th century, however, the first time women's opinions were taken into account in elections in Russia was under Catherine the Great, in elections to the Legislative Commission

Catherine and the right to vote 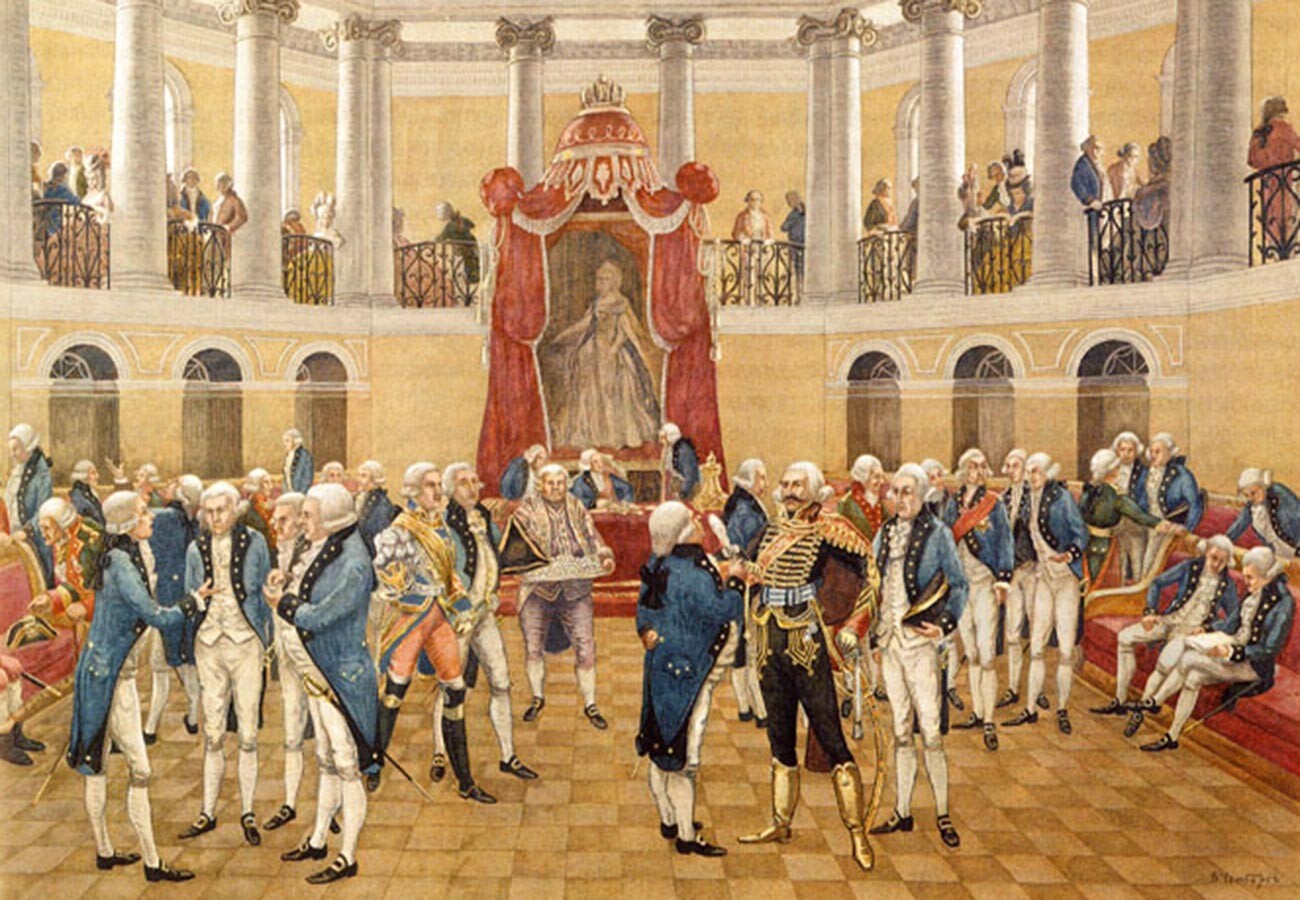 A noble assembly in Catherine II's times, by Vladimir Chambers, 1913

Suffrage for Russian women was granted by the most famous woman on the Russian throne, Catherine the Great. With his "Manifesto of Liberty" in 1762, her husband Peter III granted the Russian nobility freedom from compulsory public service (either military or civil). The manifesto was confirmed by Catherine after she overthrew Peter III: realizing the precariousness of her position, the new empress did not want to anger the Russian aristocracy and reaffirmed their privileges.

However, Catherine already had plans to attract nobles to public service. They were to be among members of the Legislative Commission, a collegial body convened by Catherine in 1766 to draft new state laws. The commission had 564 deputies in total, 161 of whom were nobles. Thus it was back in 1766 that women in Russia received the right to vote in elections for the first time.

The right to vote for members of the Legislative Commission was granted on the basis of property, namely villages with serfs. And under Russian laws, villages could be owned by women too. Back in 1753, a law was passed whereby a wife could sell her own estate without her husband's consent. That law confirmed the long-established norm whereby a woman's property was not abrogated upon her marriage. If she inherited money, property, businesses from her parents or her first husband, all those assets belonged to her. 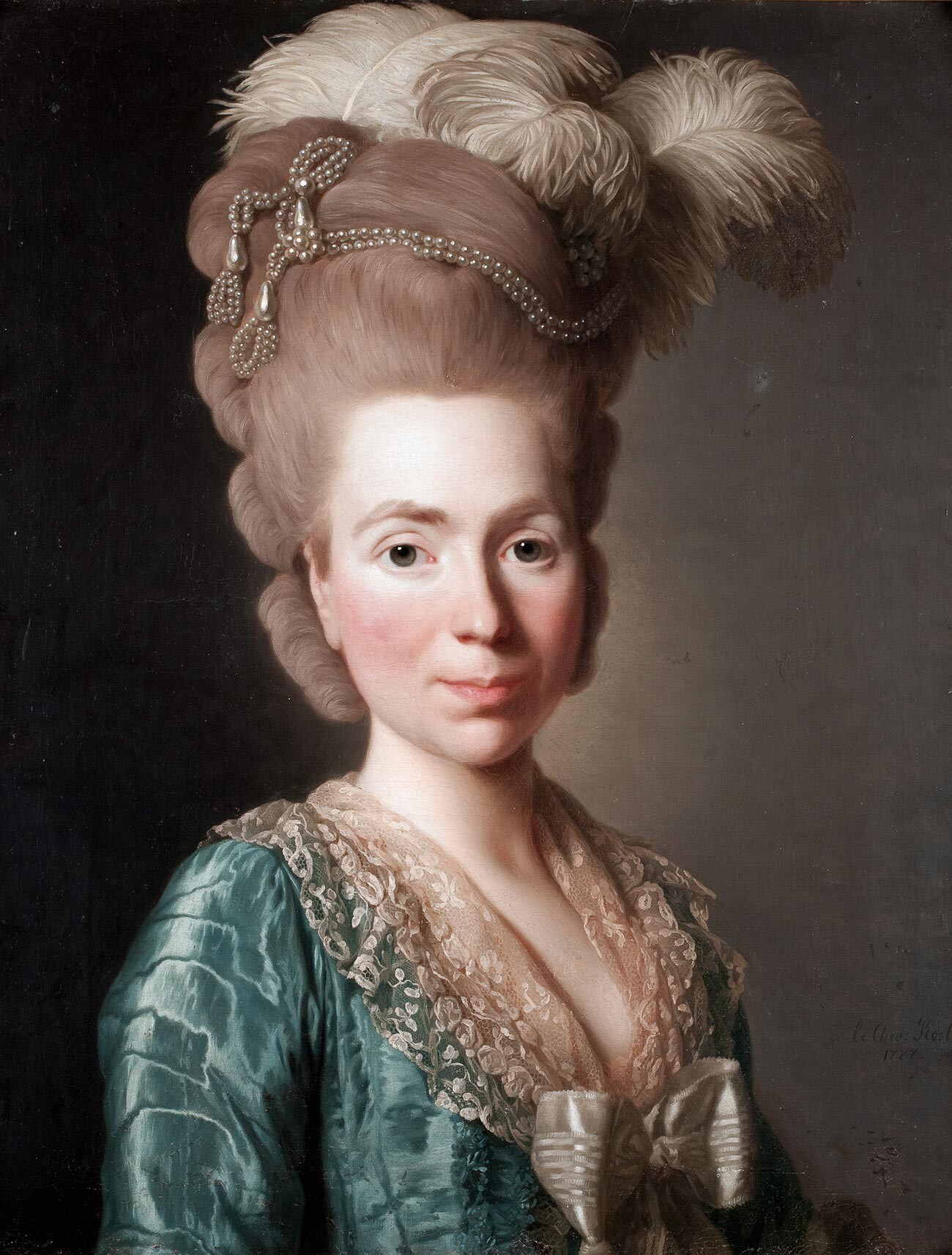 “A woman enjoyed the same property rights as a man,” historian Galina Ulyanova writes in her book 'Women Merchants, Noblewomen, Women Tycoons.’  “There was a principle of separate property. After marriage, the husband did not receive legal rights to his wife's property (estate, house, land, furniture, clothing, jewelry, etc.), as was the case in other countries."

Therefore, when elections to the Legislative Commission began, women who owned villages, which they had inherited from their parents or which were bequeathed to them by their deceased husbands, also took part in them with their votes. Under the Manifesto of December 14, 1766, noblewomen who owned villages had the right to send special documents (called "written relations") by mail to the county or provincial town in which they could express their preferences for the choice of deputies to the Legislative Commission. And those documents were indeed sent: 204 women landowners took part in the elections, naming specific deputies in their "written relations".

Subsequently, women landowners received the right to express, through similar letters, their opinions on decisions taken in the gentry assembly. Indeed, in order to elect a deputy to the Legislative Commission, the nobles of each county formed a gentry assembly – a type of self-government of the nobility. 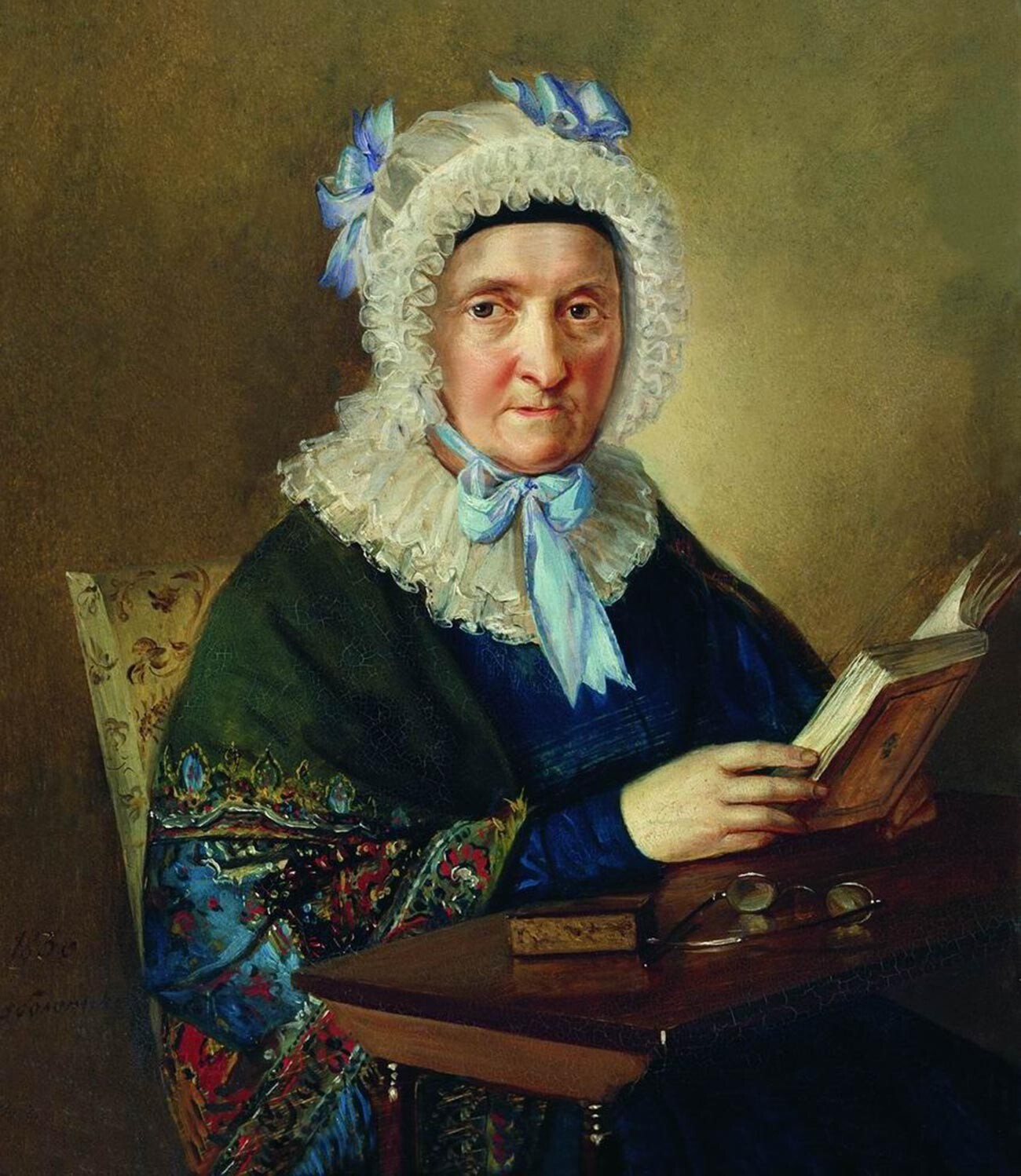 "A portrait of an old noblewoman," by Pyotr Zabolotsky, 1836

From 1766, elections to these assemblies, as well as elections of county and provincial marshals of the nobility were held regularly (every three years). However, there is no data on women's participation in them. Does it mean that they voted by mail once in 1766, and that was it? It appears so.

Women's participation in elections with their “opinions” was resumed only in 1831, when noblewomen who owned more than 100 serfs received the right to transfer their vote to a male relative or any male nobleman, which was called “authorization”. In 1832, the legislator clarified that this "electoral right" referred only to "the right to vote, not to be elected".

How women used their votes 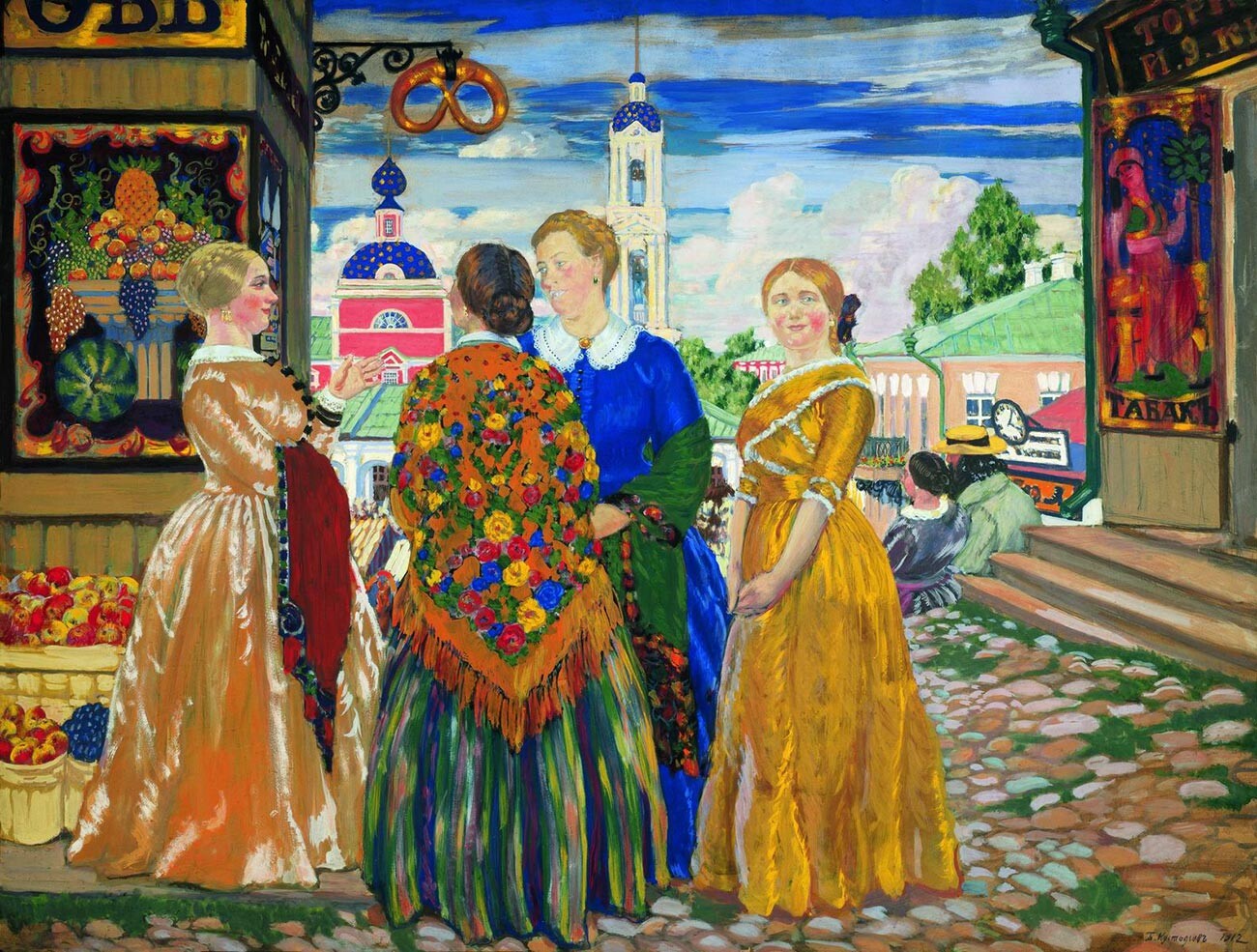 “I humbly ask you at this year's upcoming nobility elections to dispose of my ball at your discretion both on the county and the provincial ballot on the basis of the existing legal provisions,” this is roughly how the “authorization” was worded. As you can see, this electoral right was no longer active. If in elections to the Legislative Commission, noblewomen could indicate a specific candidate, now they could only transfer their vote to a man.

Nevertheless, women's votes played a significant part in the manipulations that nobles tried to carry out with elections to county and provincial assemblies. That was why those votes were so much sought by representatives of different nobility parties, who lobbied for their candidates for marshals of the nobility. 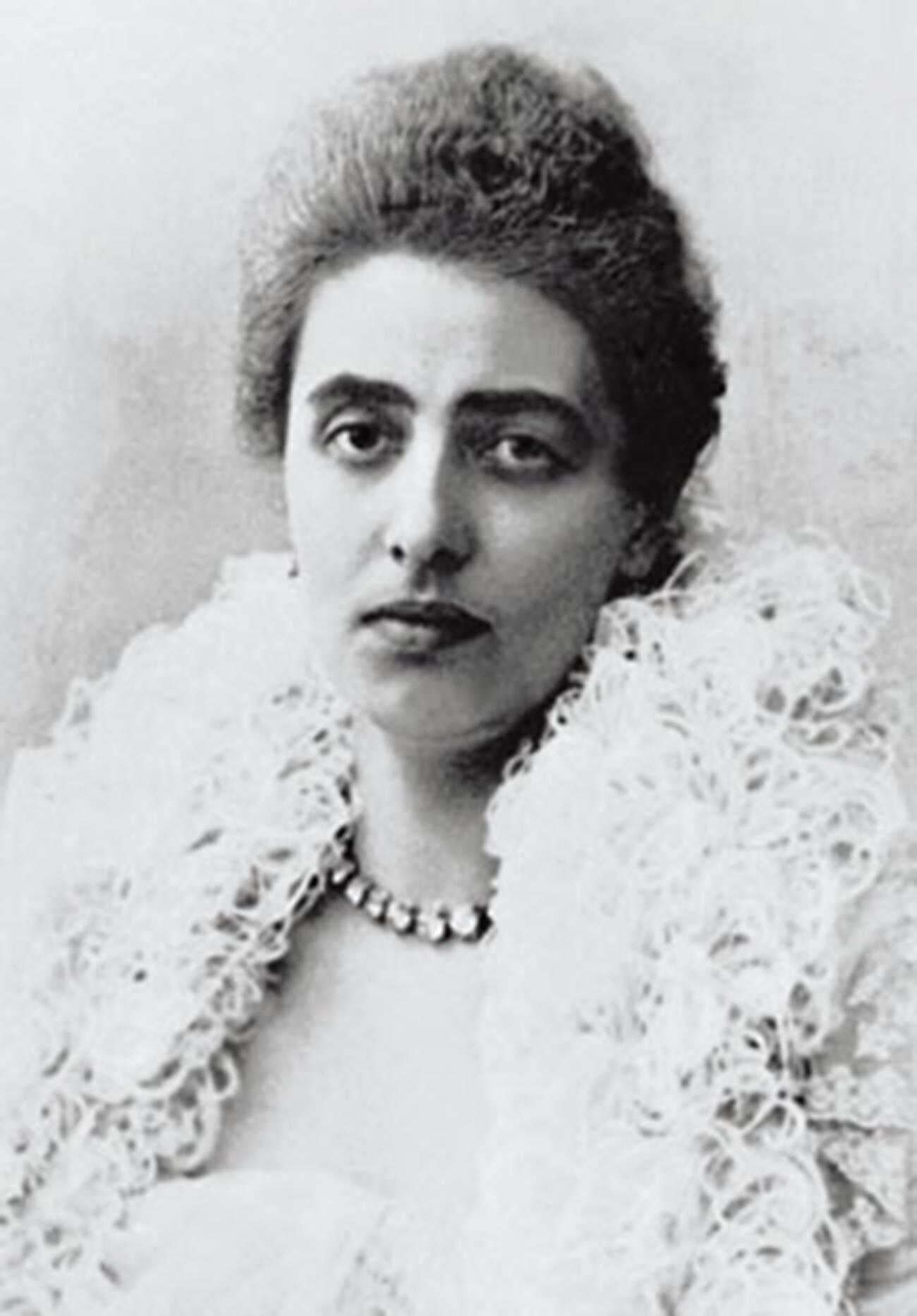 Vera Firsanova (1862-1934), one of the richest nobles of the Russian Empire and an outstanding philanthropist.

How many noblewomen submitted or transferred their "authorizations"? Historian Yelena Korchmina studied Ranenburg county records in Ryazan province. In 1832, 18 noblemen came to the polls, who had 24 votes: 18 of their own plus six delegated by noblewomen. At the same time, there were 43 noblewomen in the province who had the right to vote. In 1847, in different counties of Ryazan province, the share of women's votes by authorization ranged from 14 to 40 percent of the total number of voters. Thus, ambitious politicians who wanted to bolster their party were indeed right to try to secure noblewomen's preferences: it turns out that women's votes could account for as much as a third of votes in an election.

Judging by the memoirs of landowner Maria Nikoleva, although formally women could not attend assemblies of the nobility, they made sure to show up to follow the course of elections. “During the nobility elections, the congress in Smolensk was especially big,” Nikoleva writes. “We (women) were in the choir balcony when the debate was in progress. The noise and shouting were so loud that not a word could be heard." That is, women were in the choir balcony, presumably, of the cathedral or church where the elections were held: they were therefore not present in the hall, but they could observe everything.

A century of women's rights in Russia 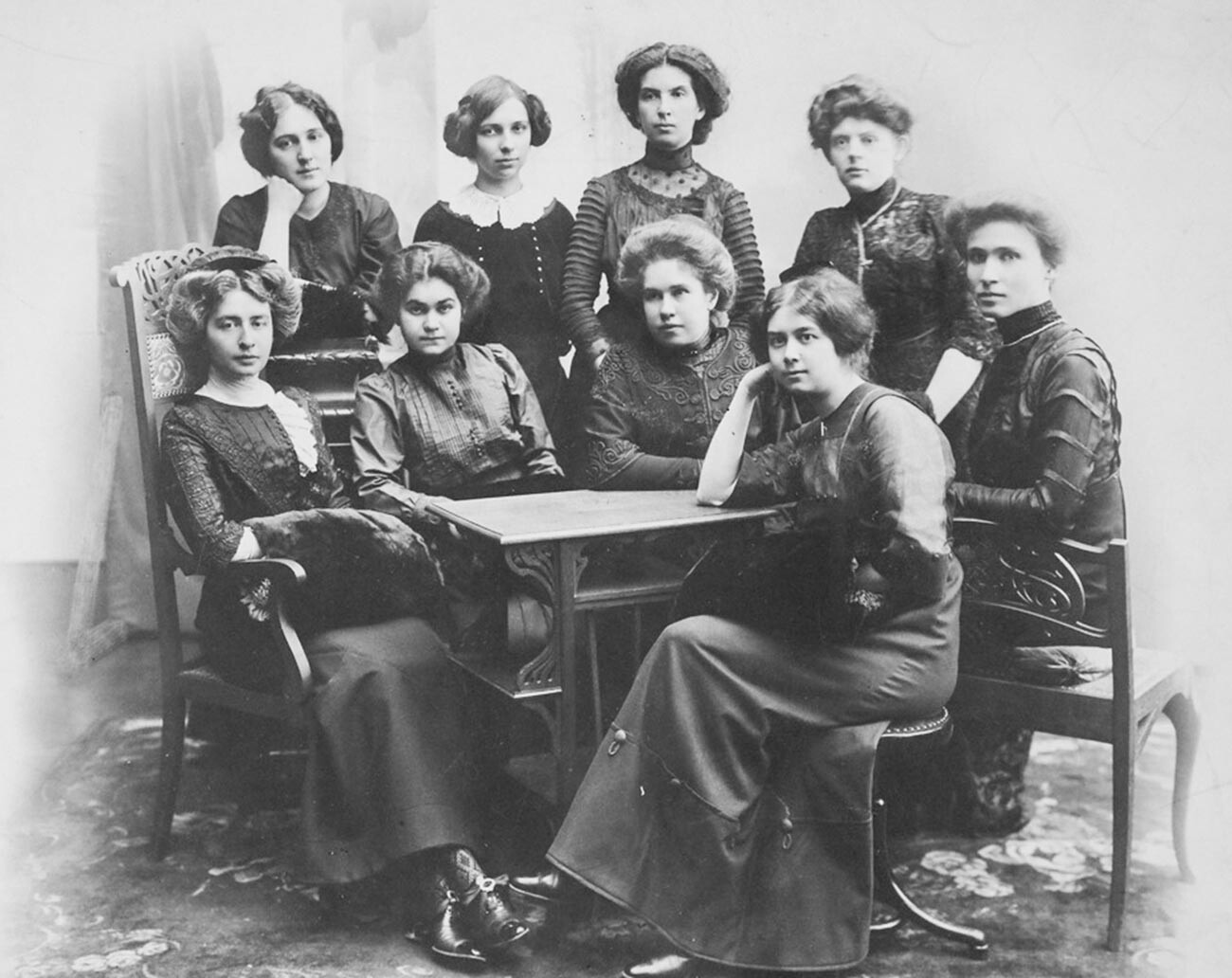 Attendees of the Higher Women's Courses

The great reforms of Alexander II, of course, changed the position of Russian women too. First of all, the 1864 zemstvo reform established elections to the zemstvo [local self-government] bodies. The law stated that the right to vote was granted to men aged 25 and over. However, women who had the necessary property qualification as owners of land or real estate in towns could authorize their fathers, husbands, sons, sons-in-law, and siblings to vote for them. The same model applied as with noblewomen's "authorizations" in nobility elections.

This principle remained in place for a long time and eventually migrated to the first Russian laws on elections to the State Duma in 1905. The first territory in the Russian Empire where women received active suffrage was Finland in 1906.

The process of women's growing rights awareness could not be stopped: to a large extent, it was influenced by the active participation of women in business activity. As demonstrated by historian Galina Ulyanova, in terms of doing business women in Russia had equal rights with men from as early as the 18th century. A significant part of textile and leather factories and enterprises in the Russian Empire belonged to women who had inherited the business from their husbands or fathers. Furthermore, women most often managed their firms themselves. Russia knew hundreds of women entrepreneurs and landowners: Maria Morozova, Vera Firsanova, Natalia Golitsyna are just the most famous of them. 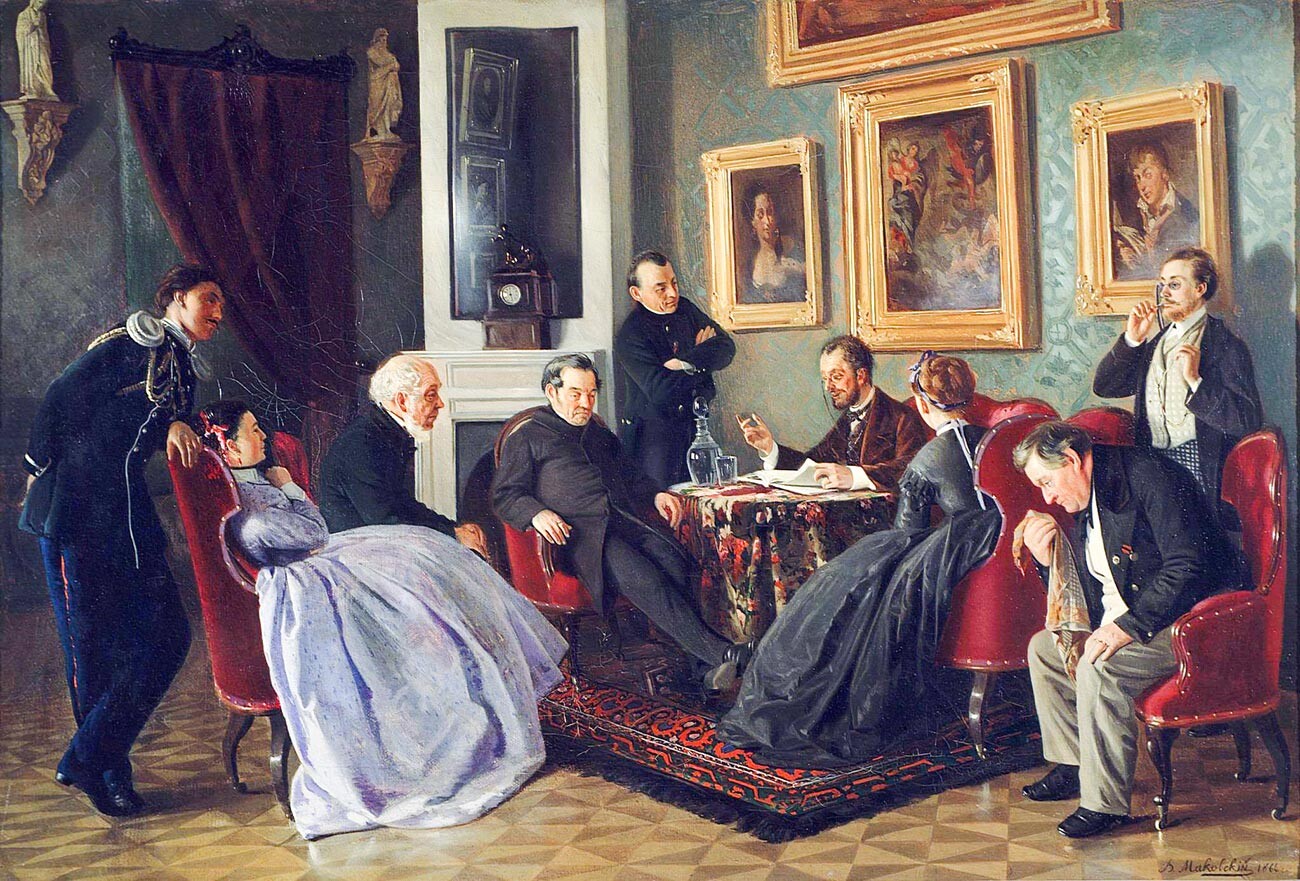 "A literature reading," by Vladimir Makovsky, 1866

On January 14, 1871, Alexander II approved the law “On admitting women to serve in public and government institutions”. Women received the right to officially work as midwives, paramedics, pharmacists, teachers and tutors, telegraph operators and accountants. In 1873, a collection of laws and documents "Women's Law" was published in Russia.

These documents explained that women could take out merchant certificates and could – with appropriate registration - hold the position of a clerk (steward) at someone else's property. Although divorce for a Russian woman was still a serious problem, women were ready to defend their property rights with law books in their hands.

“In Russia, in families of different classes, from nobility to petty bourgeois, when they got married, a detailed inventory of the property with which the wife moved to her husband’s house was compiled,” writes Galina Ulyanova. “This inventory was confirmed and passed on to the groom in the presence of witnesses and the bride's father. If the marriage did not work out, the husband offended the wife and the wife wanted to return to live with her parents, she took with her all the items she had contributed to their joint household as per the inventory, and if something was missing, she could turn to the police to force her husband to return everything." 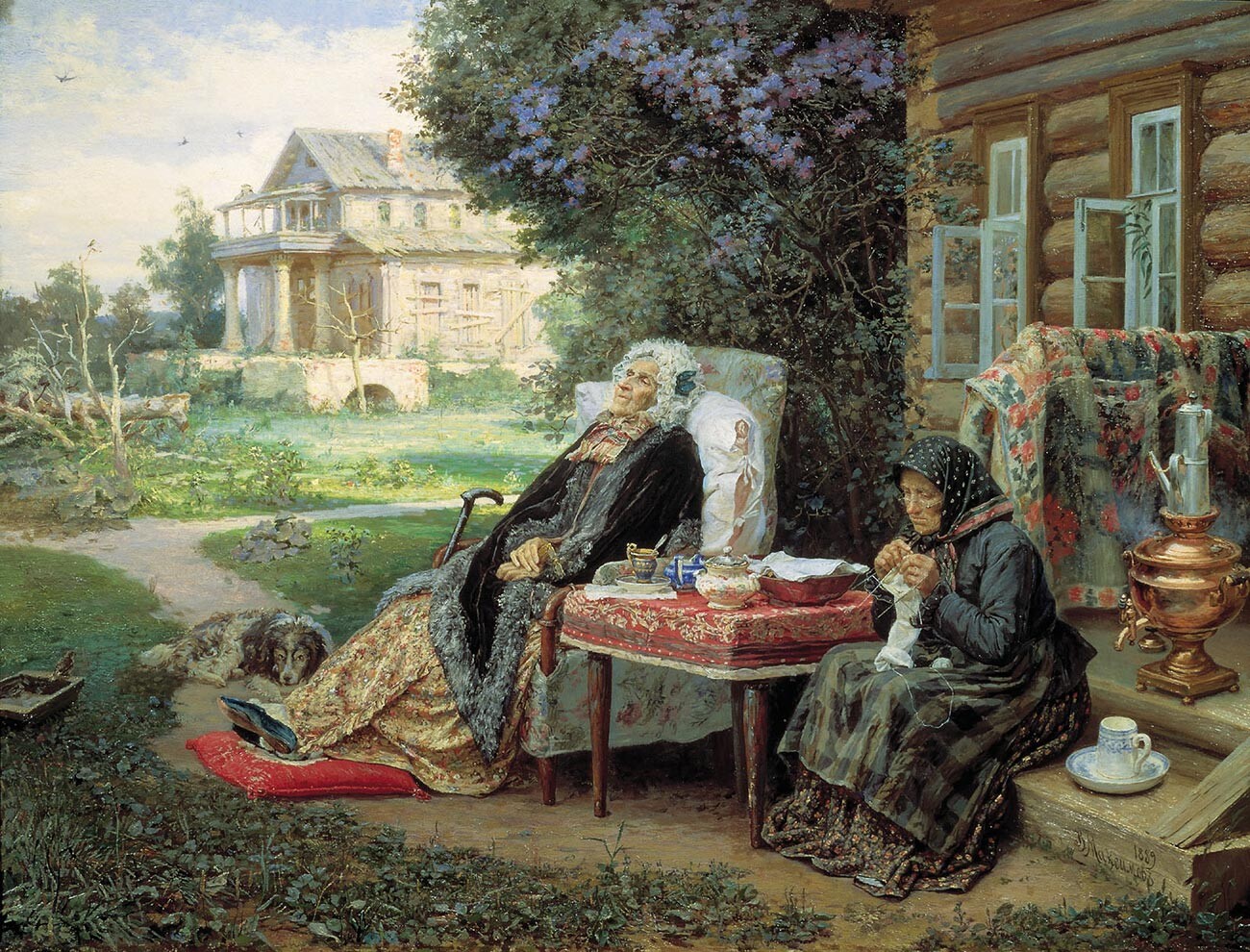 "Everything's in the past" by Vasiliy Maximov

Of course, not all women managed to separate from their husbands and keep their property, but for the whole of the empire there were hundreds and even thousands of them. Historian Anna Lavryonova in an academic article, The blue uniform in the mirror of venus: Interactions between personal life and professional career of the separate gendarme corps officials shows that the spouses of Russian gendarmes did not hesitate to personally address their husbands' superiors with demands and requests. One of the most frequent complaints was that the husband who had been sent to a distant posting did not send sufficient allowance to his wife who remained at home. Interestingly, as is evident from many cases, often husbands and wives lived separately for years – in the second half of the 19th century, that was the most popular way of getting divorced without involving the church.

By the end of the 19th century, the position of women in Russian society was not as unequivocally disenfranchised as it is commonly thought to be. Women found ways to solve their marital problems, manage enterprises and firms, and even to a certain extent formally influence the political life in the country. Of course, all these opportunities were not easy to implement, and only the most energetic and persistent of Russian women, who did not give up even in the face of an entire empire, succeeded.