How did Kazakhstan become part of the USSR? (PHOTOS) 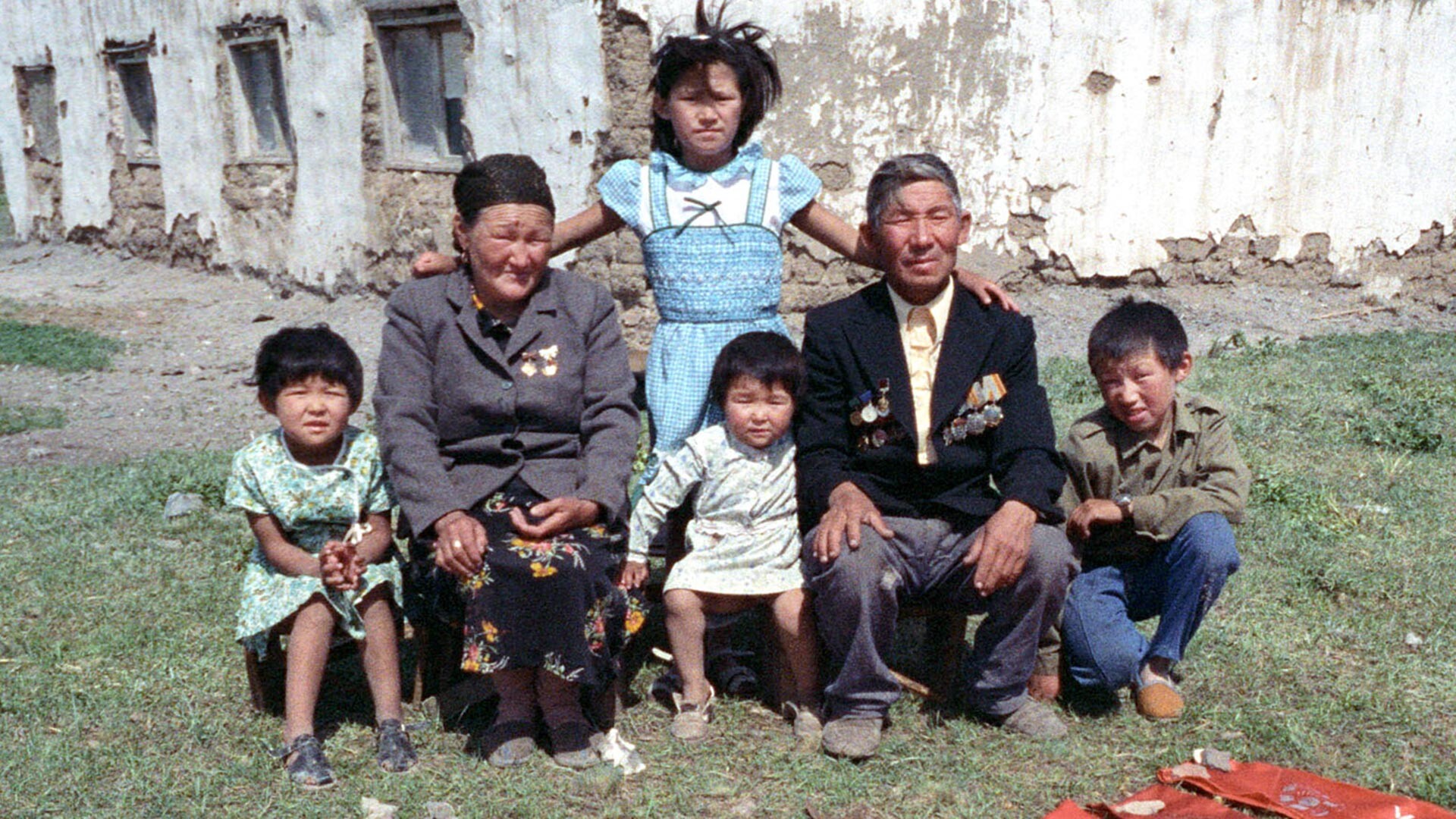 V. Pavlunin/TASS
The Kazakh Soviet Socialist Republic was the trusty rearguard of the USSR both in peacetime and in war. It was here that the country's industrial potential was cultivated, nuclear weapons were tested, and the world's first cosmodrome was built.

Russia came to the Kazakh steppe in the early 18th century. The first to voluntarily fall under the rule of the Russian autocrats in the 1730s were the Kazakh clans of the so-called Younger and Middle Zhuzes (associations), who sought protection from the warlike Dzungars. For control of the Senior Zhuz, they had to fight with the Khanate of Kokand, but in the latter half of the 19th century the territory was annexed to the Russian Empire, where it remained until the latter’s disintegration in 1917. 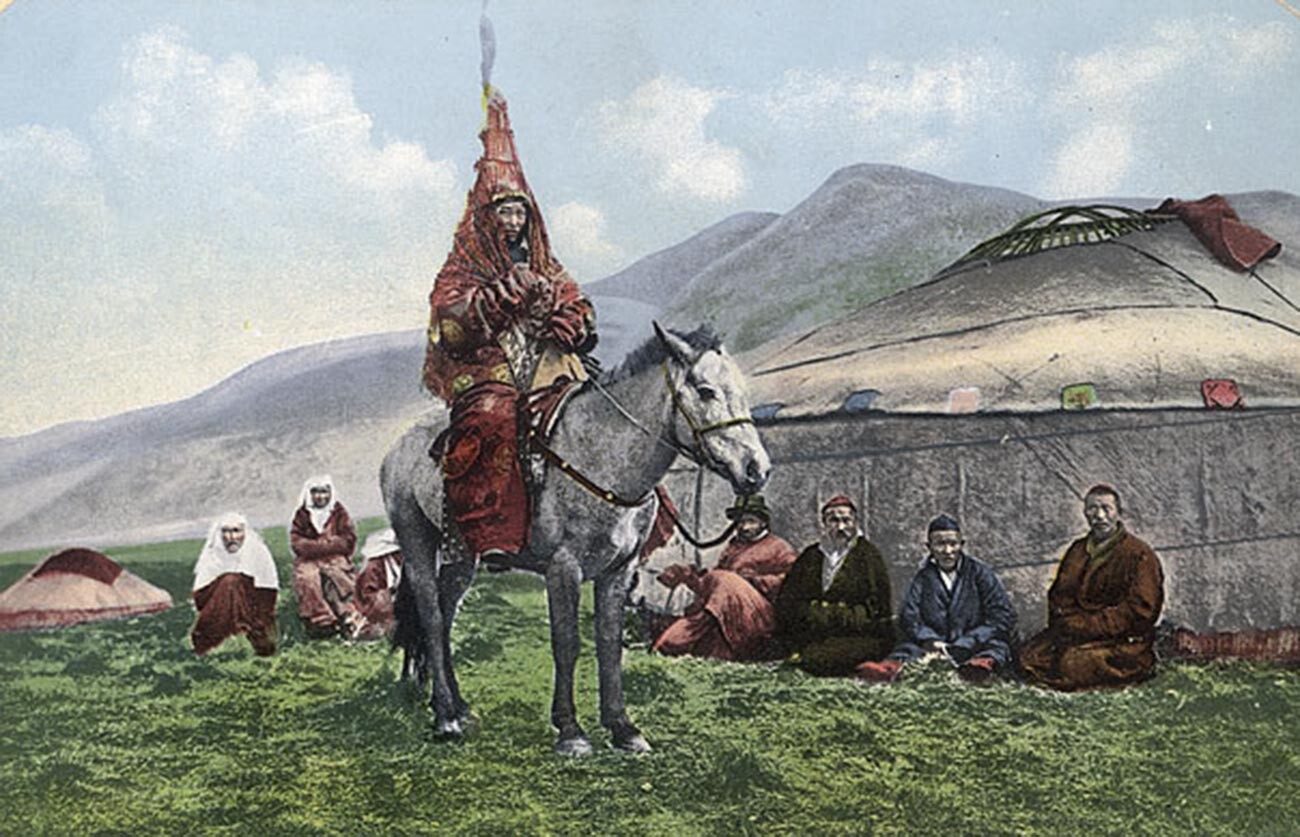 In the early years of Soviet power, the Kazakh-inhabited lands underwent a major national-territorial demarcation: the names, borders and capitals of their national autonomies changed numerous times. For instance, in the period from 1920 to 1929, the Kazakhs saw three capitals: Orenburg, Kyzyl-Orda (Kyzylorda) and Alma-Ata. Administrative and territorial stability came only in 1936, when the Kazakh Autonomous Soviet Socialist Republic was officially withdrawn from Soviet Russia and elevated to a Union republic within the USSR. 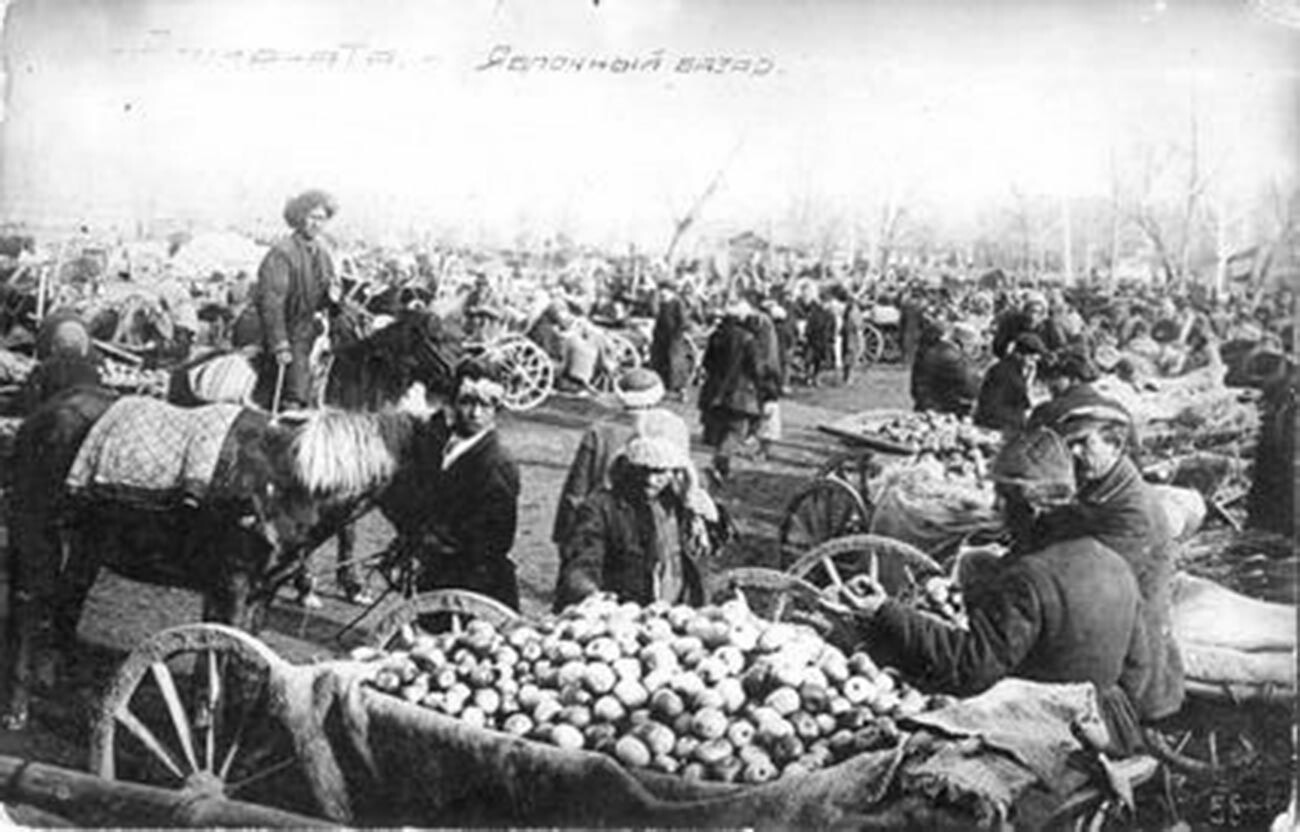 Kazakh apple martket in the 1920s.

The collectivization policy pursued by the Soviet government in the late 1920s (that is, the combining of individual peasant farms into collective ones), ignoring the realities of Kazakh life, coupled with the forced transfer of nomads to a sedentary lifestyle and an ensuing drought, led, in 1931-32, to the worst famine in the country’s history. According to various estimates, between 1 and 1.5 million people died, and about 200,000 more migrated to neighboring Iran, China and Afghanistan. 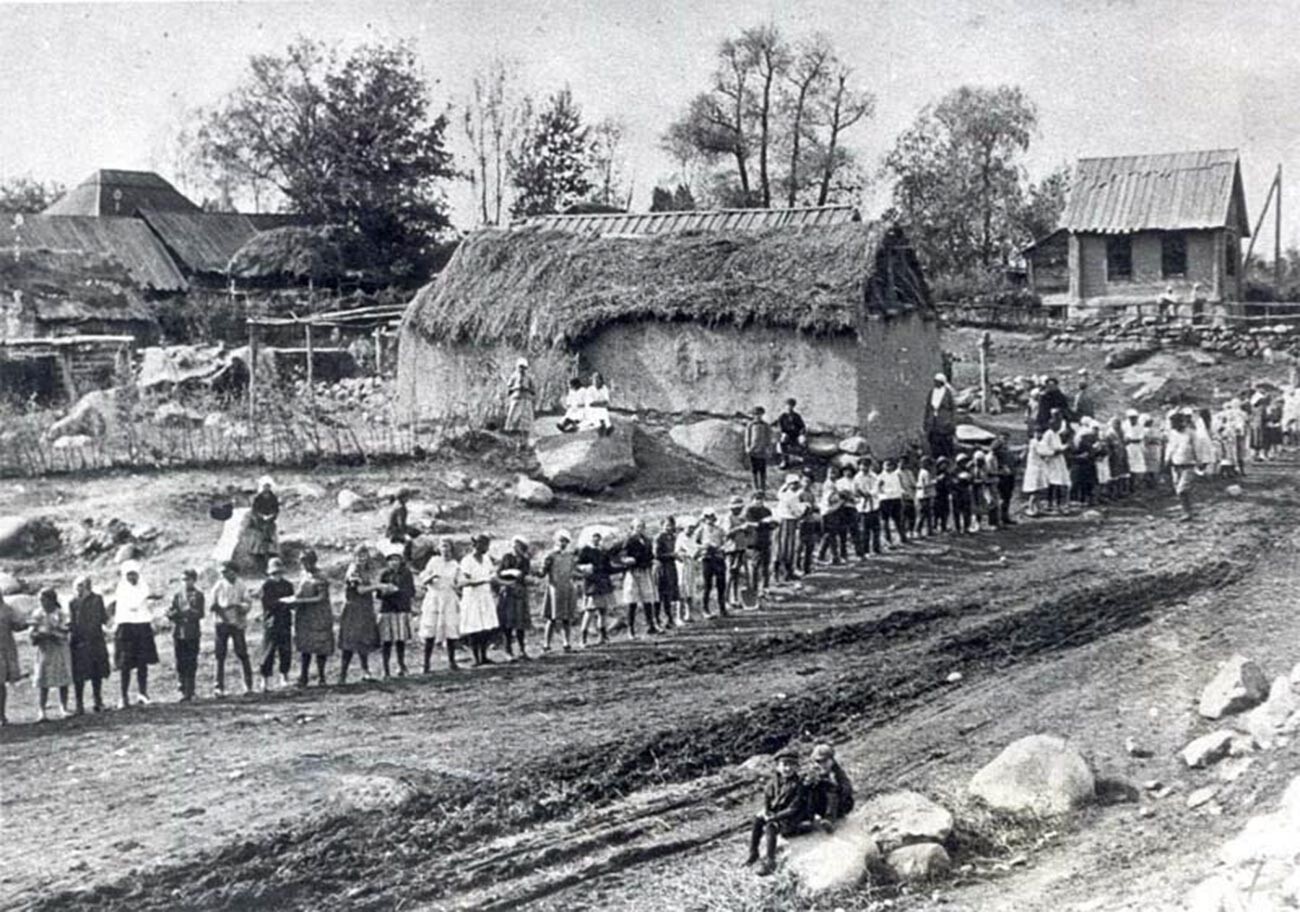 Meanwhile, the Soviet government’s campaign to eradicate illiteracy throughout the country was more judicious and of special importance for Kazakhstan — at the time of the collapse of the Russian Empire, its literacy rate was in the region of five percent, but by 1939 it was over seventy. On the eve of World War II, there were around 40,000 students at the republic’s 20 universities and more than 100 secondary educational institutions. 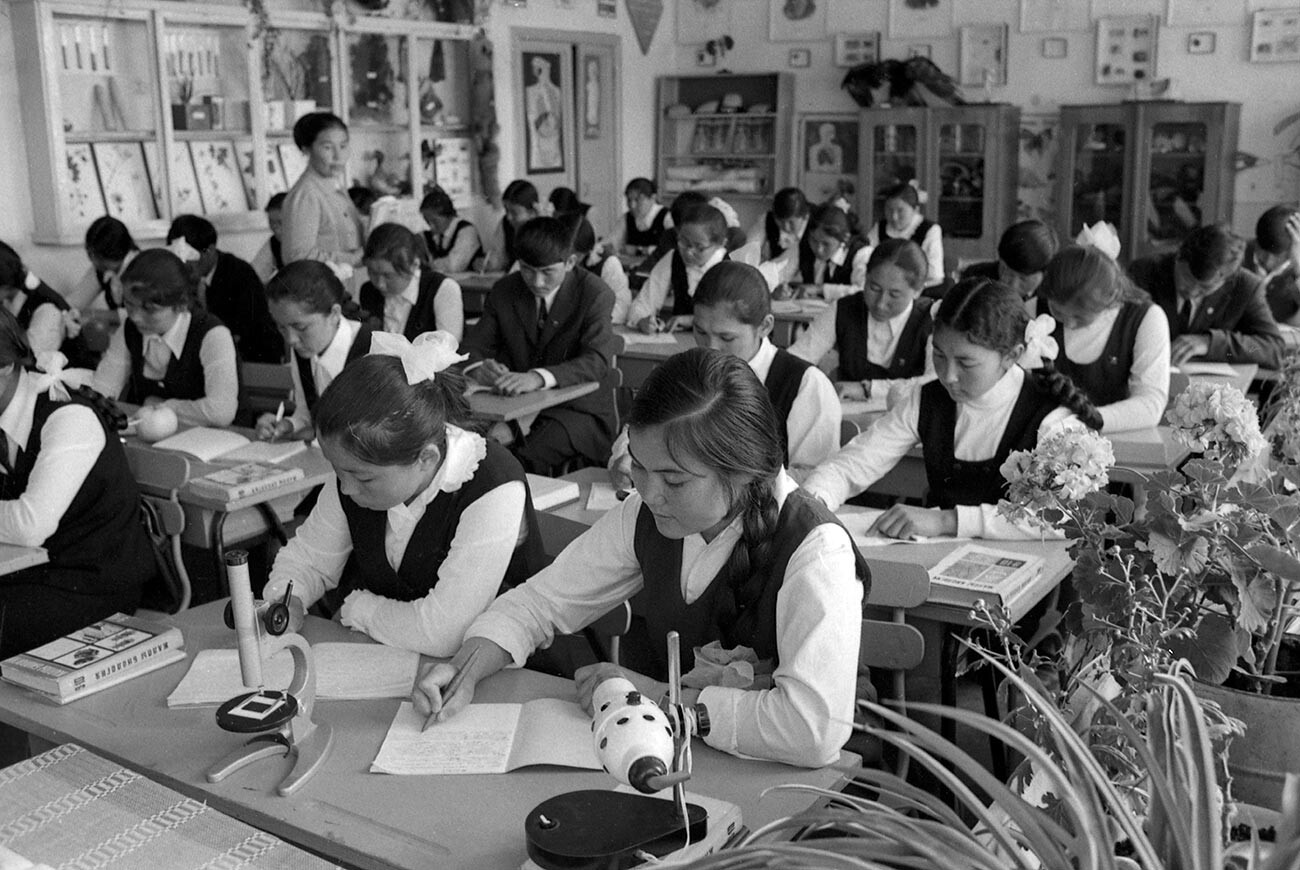 A school in the Jambyl Province of the Kazakh Soviet Socialist Republic.

In the 1930s-40s, the vast but sparsely populated Kazakhstan became the main refuge for entire peoples deported by the Soviet authorities: Poles and Ukrainians from Western Ukraine, Chinese and Koreans from Sakhalin and Primorye in the Russian Far East, Germans from the Volga region, and many others. The exoneration and return home of the exiles began only after Stalin’s death in 1953. 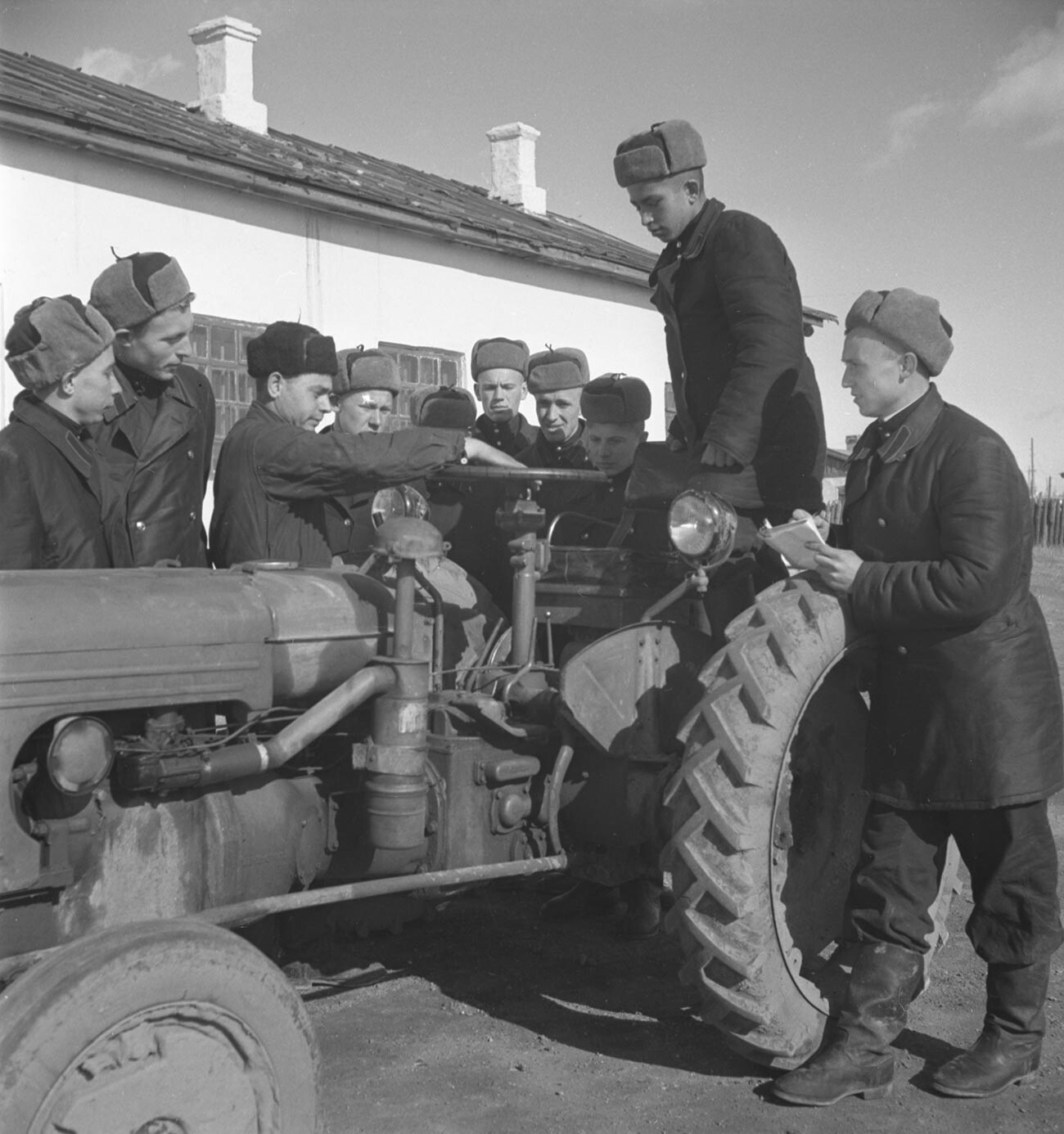 At the same time, the Kazakh SSR began to be transformed into the industrial heart of the Soviet Union: heavy and light industry saw rapid growth, plants and factories were built, and mineral deposits mined and developed. For instance, the Karaganda coal basin became the largest in the country after the Donbass in Ukraine and the Kuzbass in Siberia. Due to the lack of manpower in the Kazakh SSR, hundreds of thousands of workers from the across the country were relocated there. 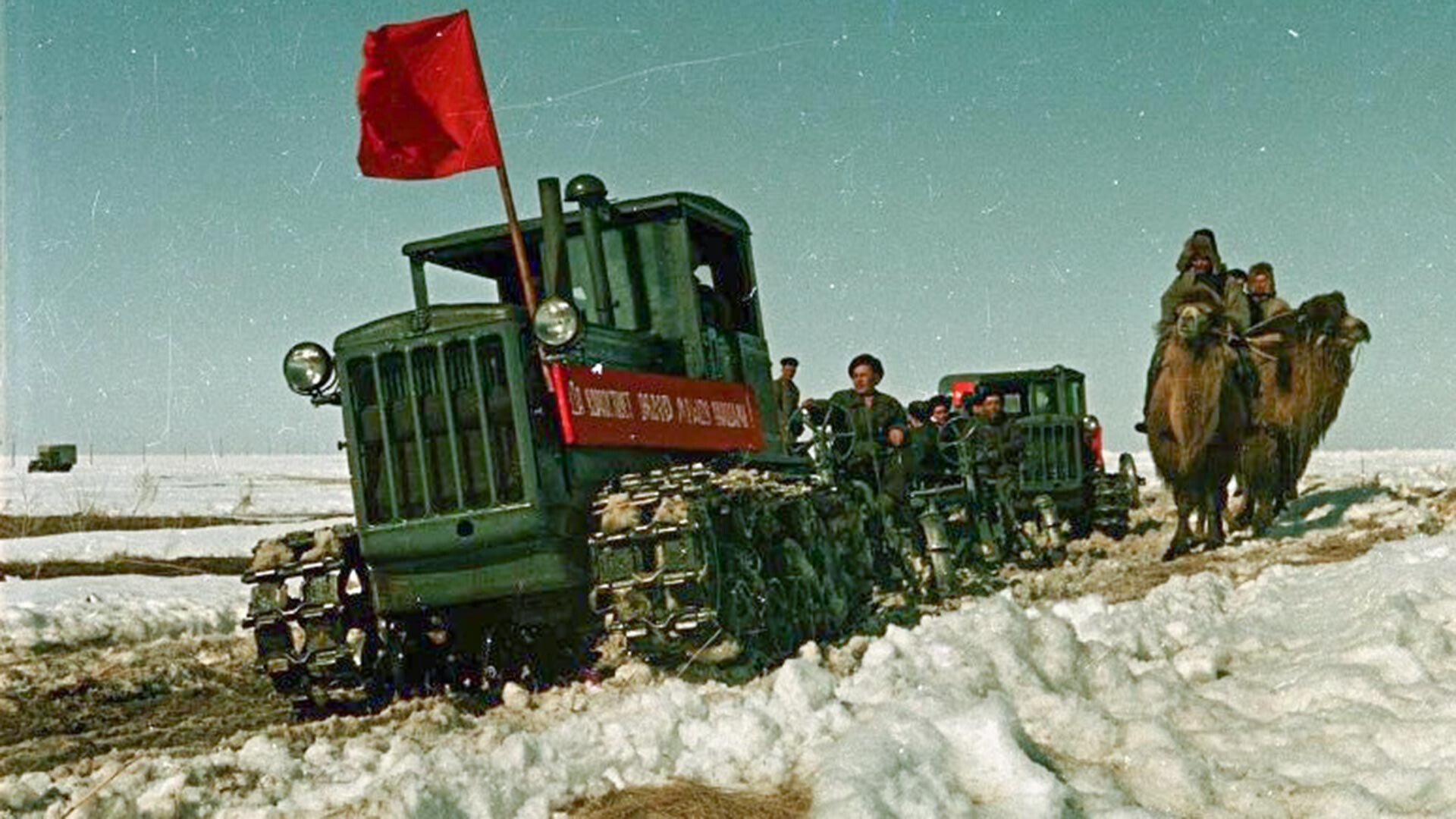 Cultivation of the lands in Kazakhstan.

During World War II, Kazakhstan was the trusty rearguard of the USSR. Around 150 enterprises were evacuated there from the western regions of the country, and several hundred more were built up from scratch. With the Soviet Union’s most important sources of raw materials under German occupation, the Kazakh SSR increased production of non-ferrous metals, electricity and liquid fuels severalfold. More than a million Kazakhs took part in fighting the enemy, from defending the border at Brest Fortress to the capture of Berlin. 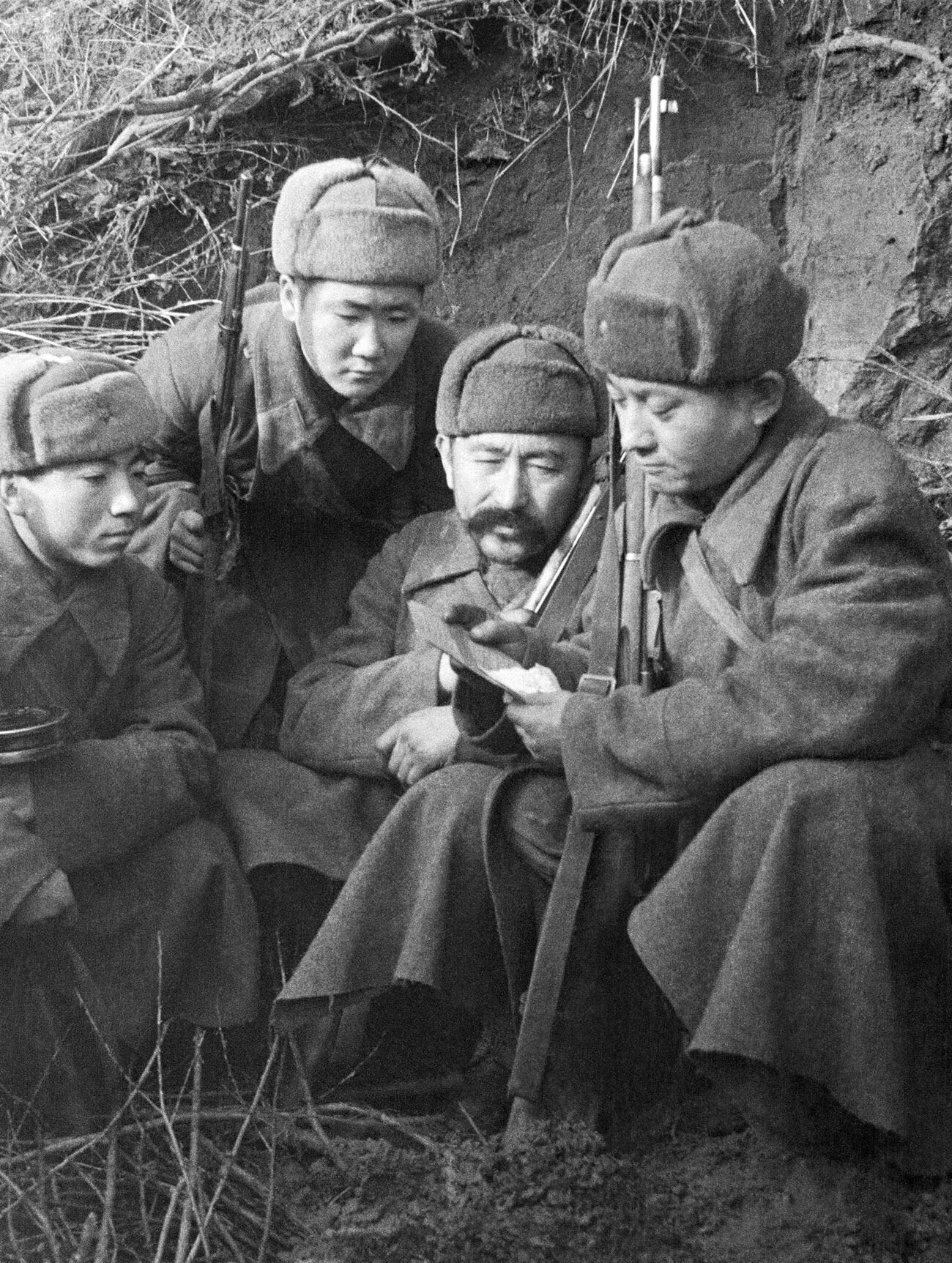 In the post-war period, the Kazakh SSR continued to develop as the Soviet Union’s most important economic center: a large-scale campaign was launched to cultivate the virgin lands, dozens of cities were founded and new enterprises built. The uninhabited Kazakh steppe was also the ideal testing ground for the first Soviet atomic bomb in 1949. The republic’s terrain and latitude also made it suitable as the site of the world’s first cosmodrome, Baikonur. Built in 1957, it operates to this day. 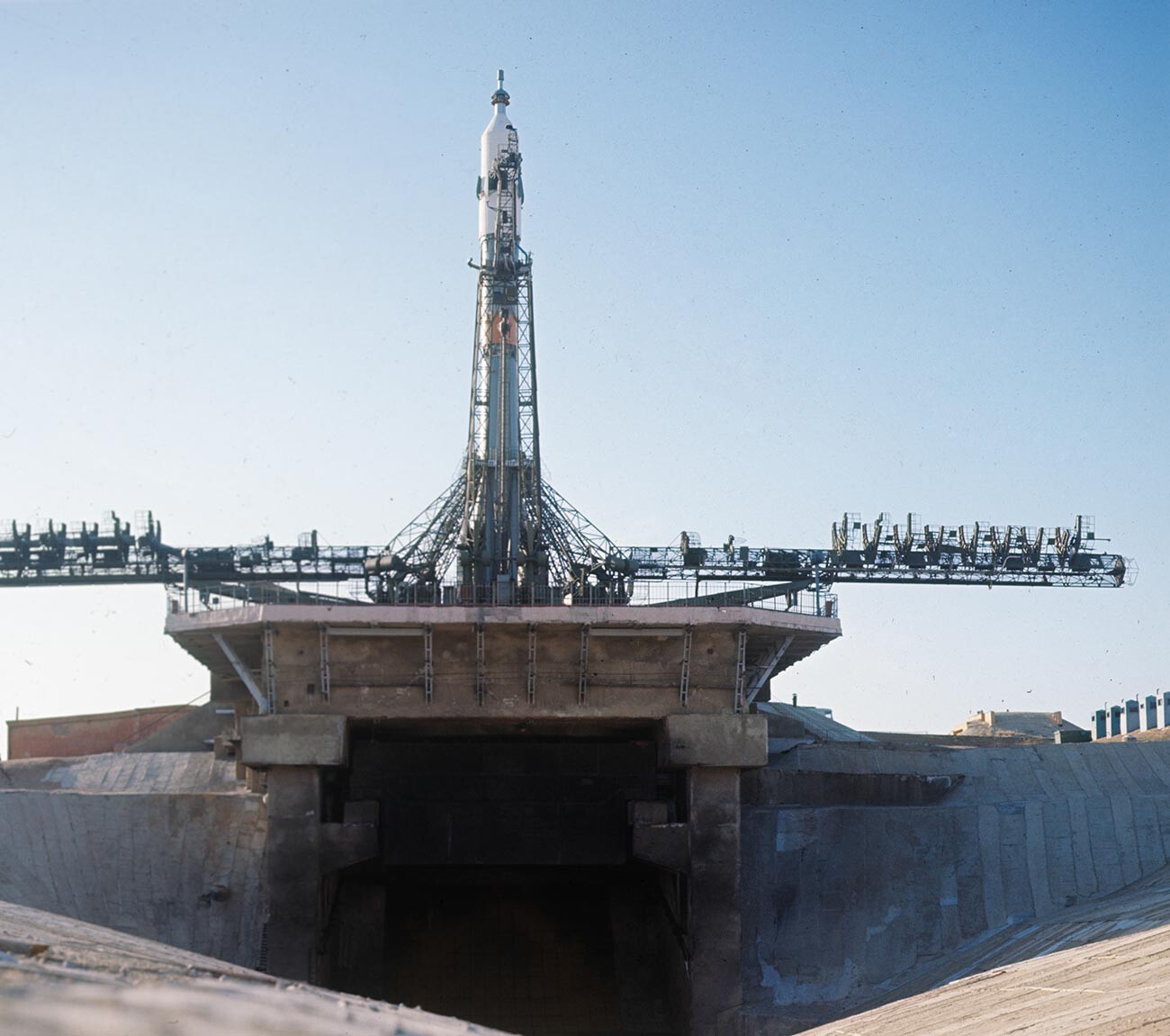 The leadership of the Kazakh SSR kept an anxious eye on the disintegration of the Soviet Union that began in the late 1980s. The close economic ties between the republic and Soviet Russia, plus the fact that the native Kazakh population was far outweighed by non-Kazakhs (Kazakhs numbered 6.5 million out of 16 million in 1989), prompted it to act with extreme caution. Hence, Kazakhstan was the last of the Soviet republics to secede from the USSR, declaring independence on Dec. 16, 1991. 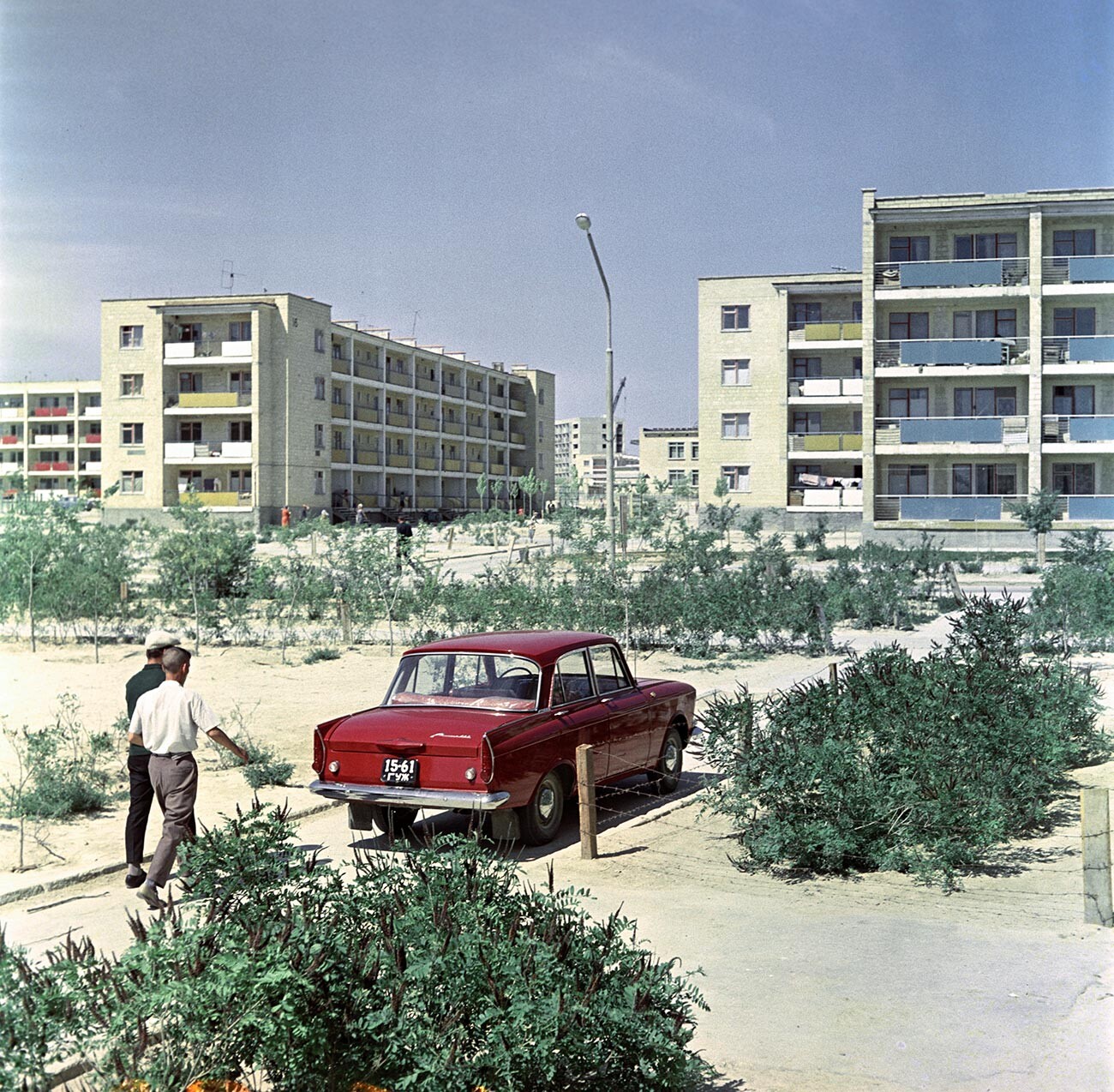